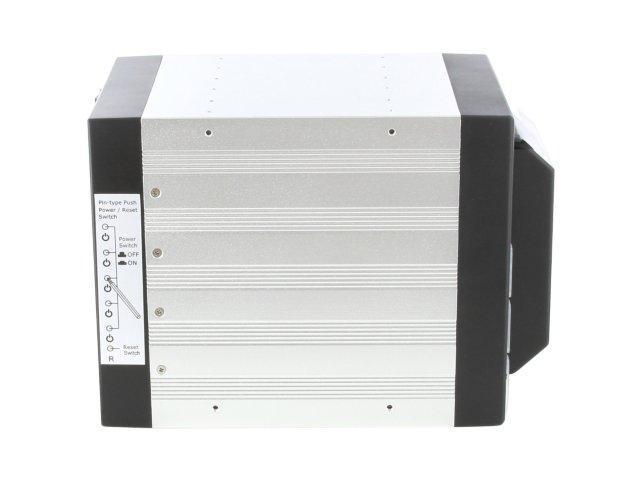 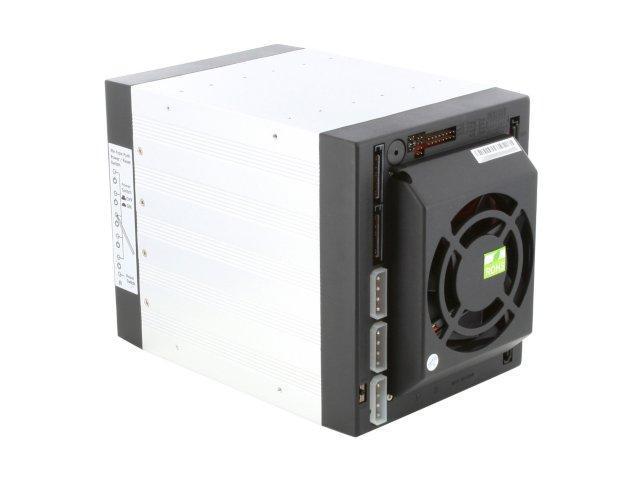 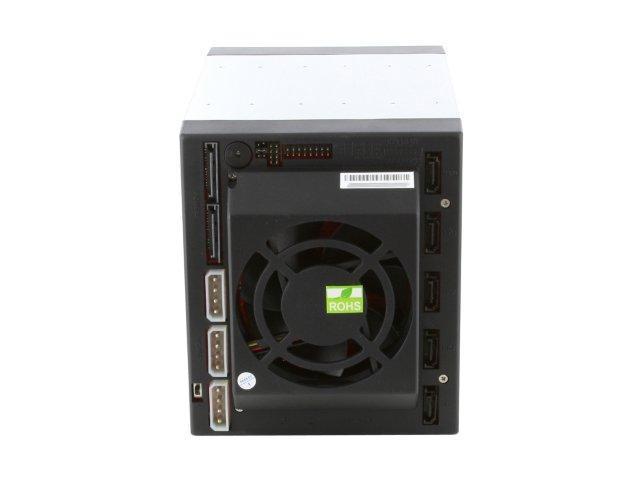 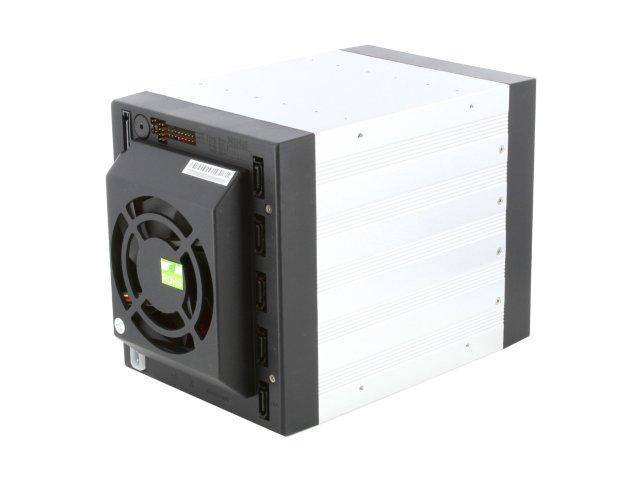 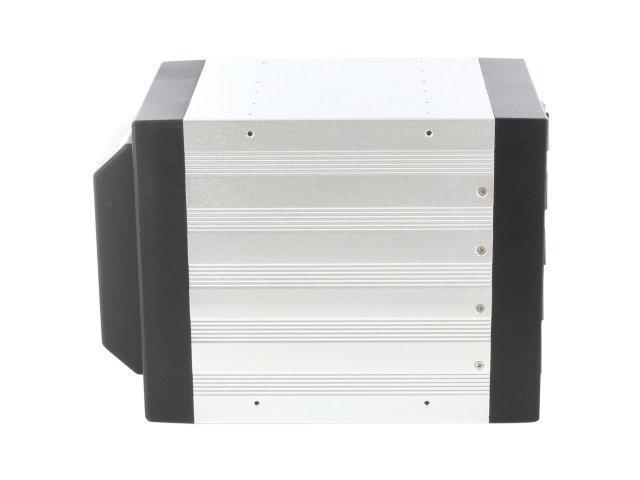 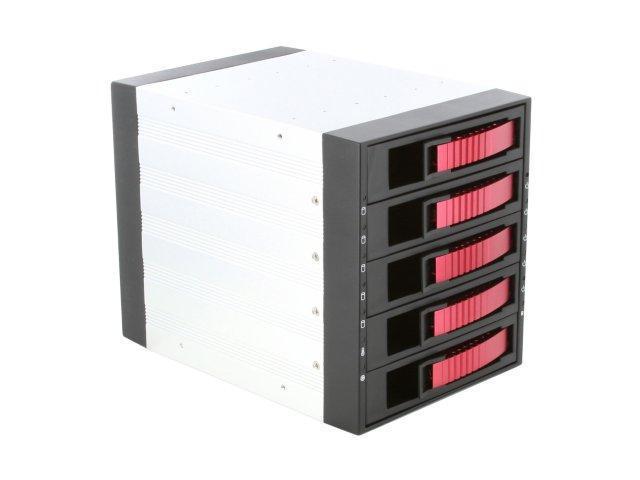 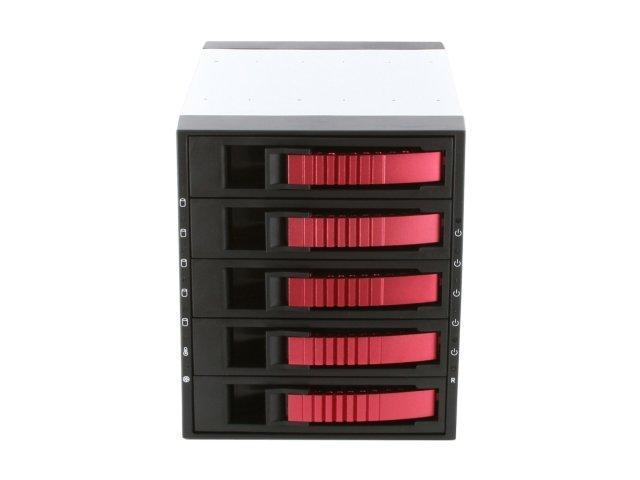 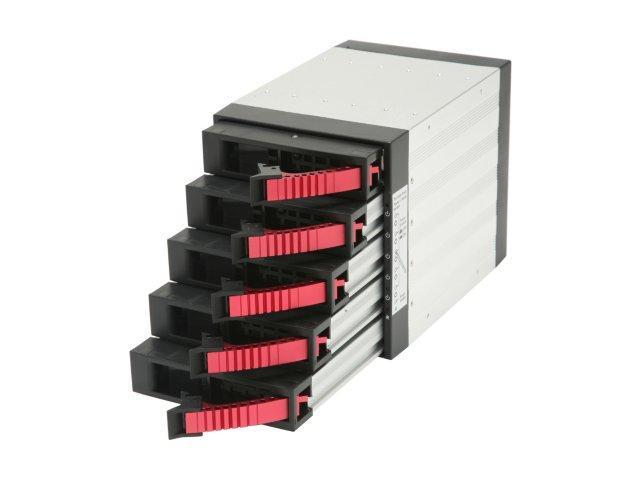 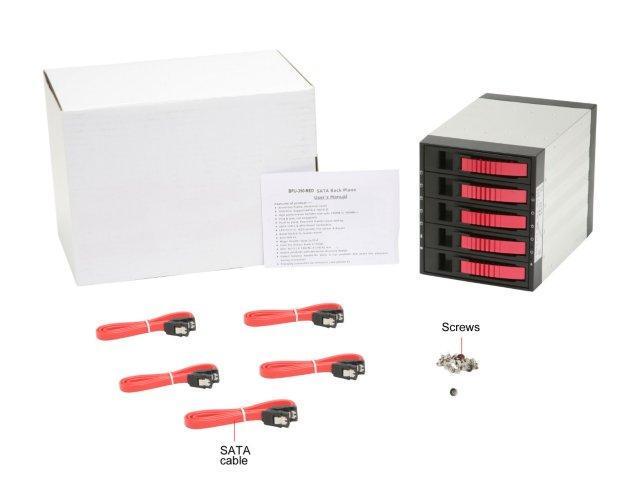 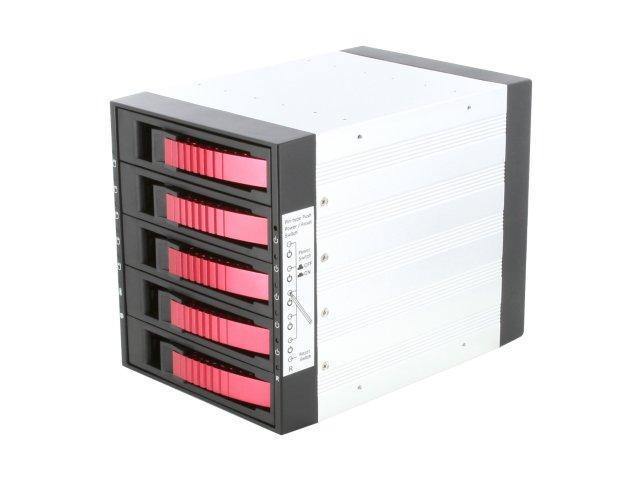 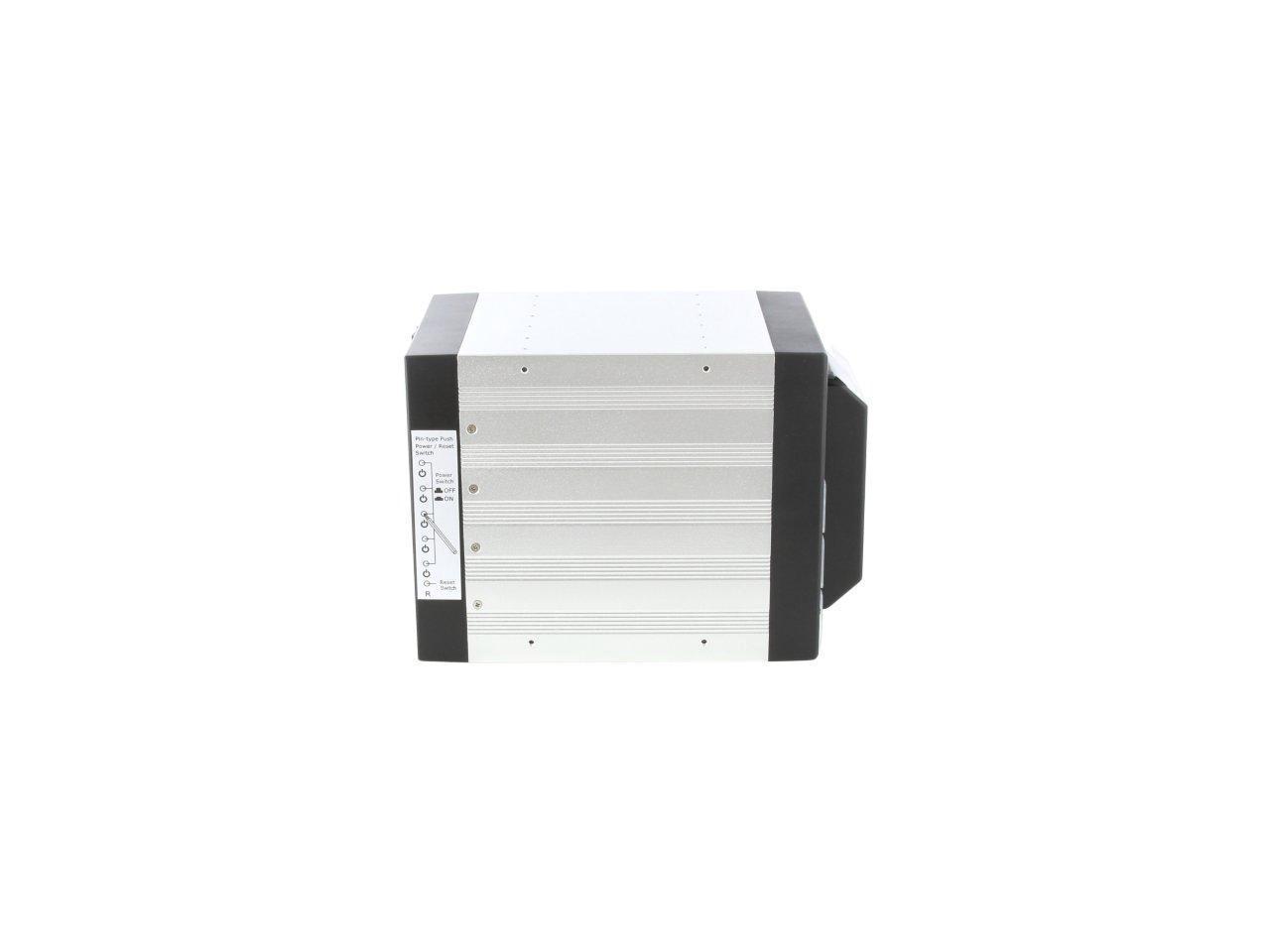 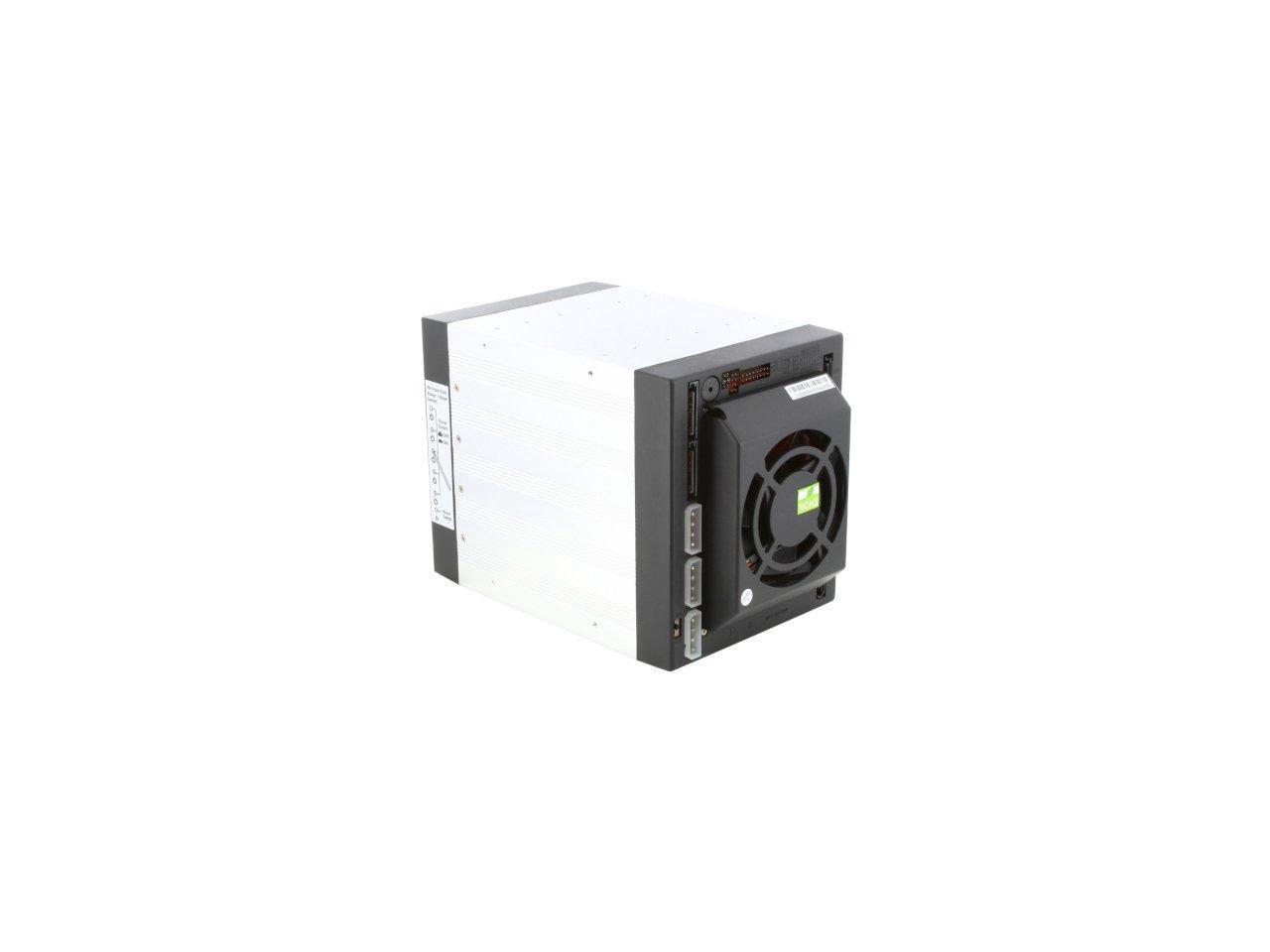 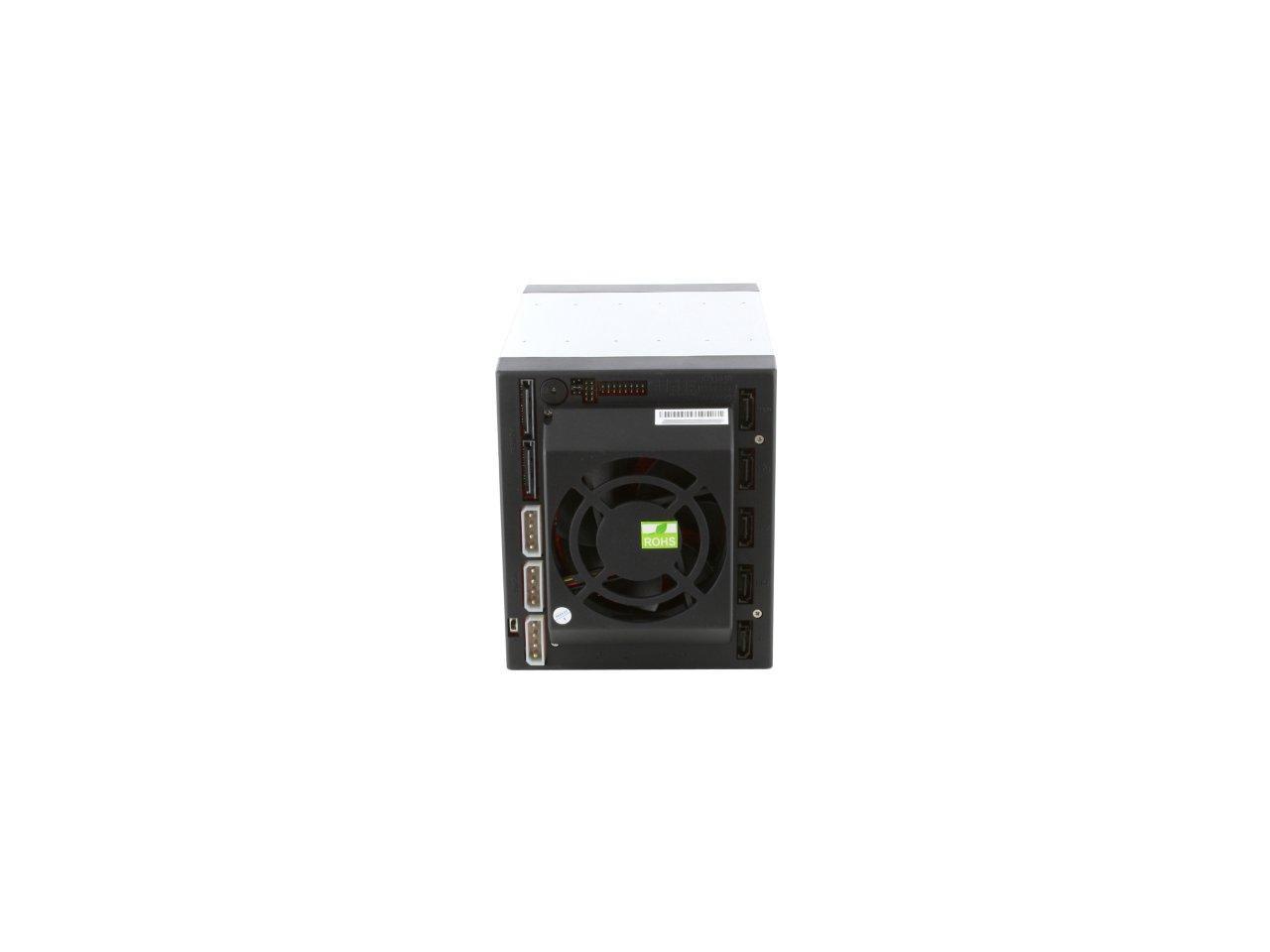 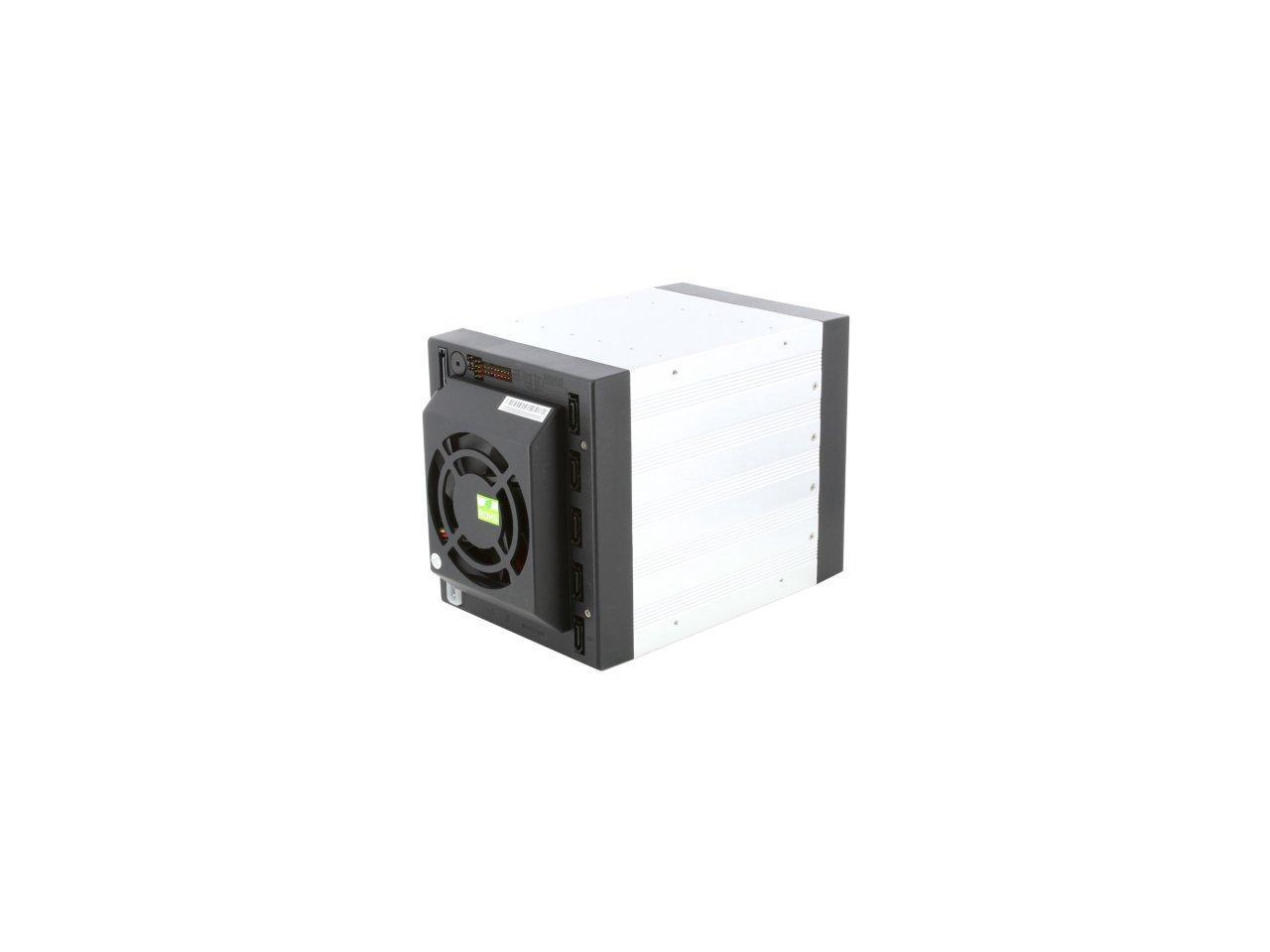 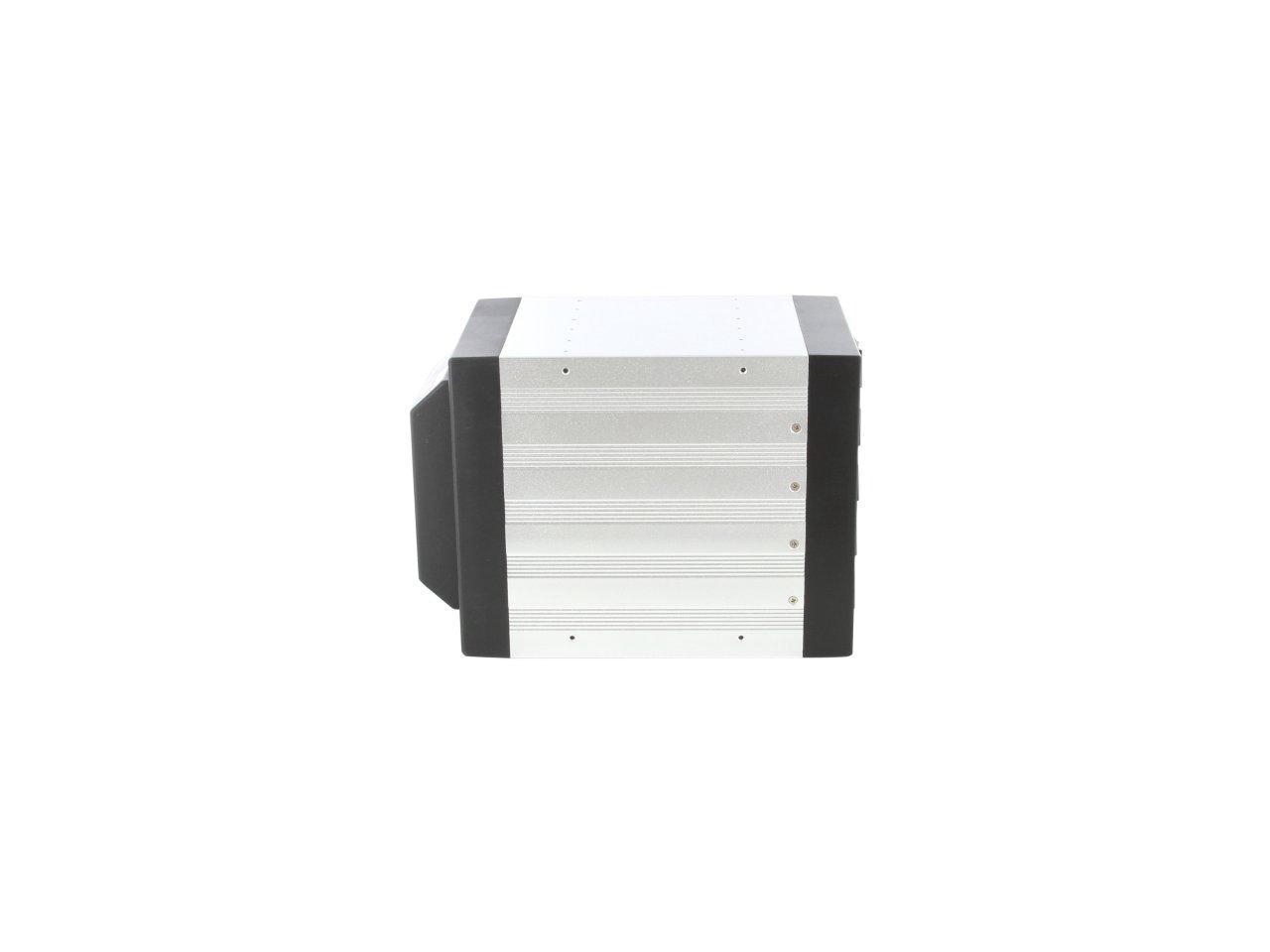 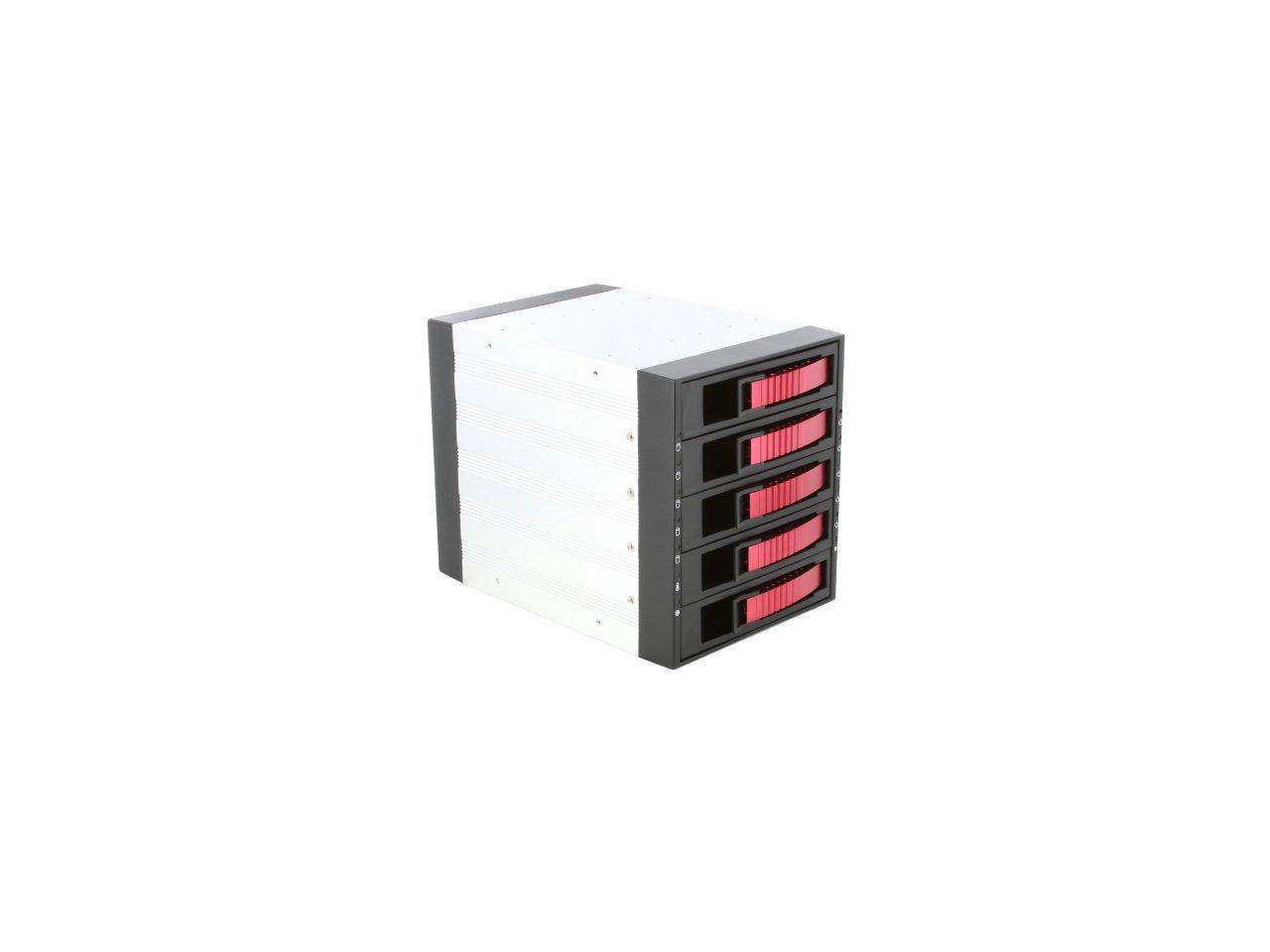 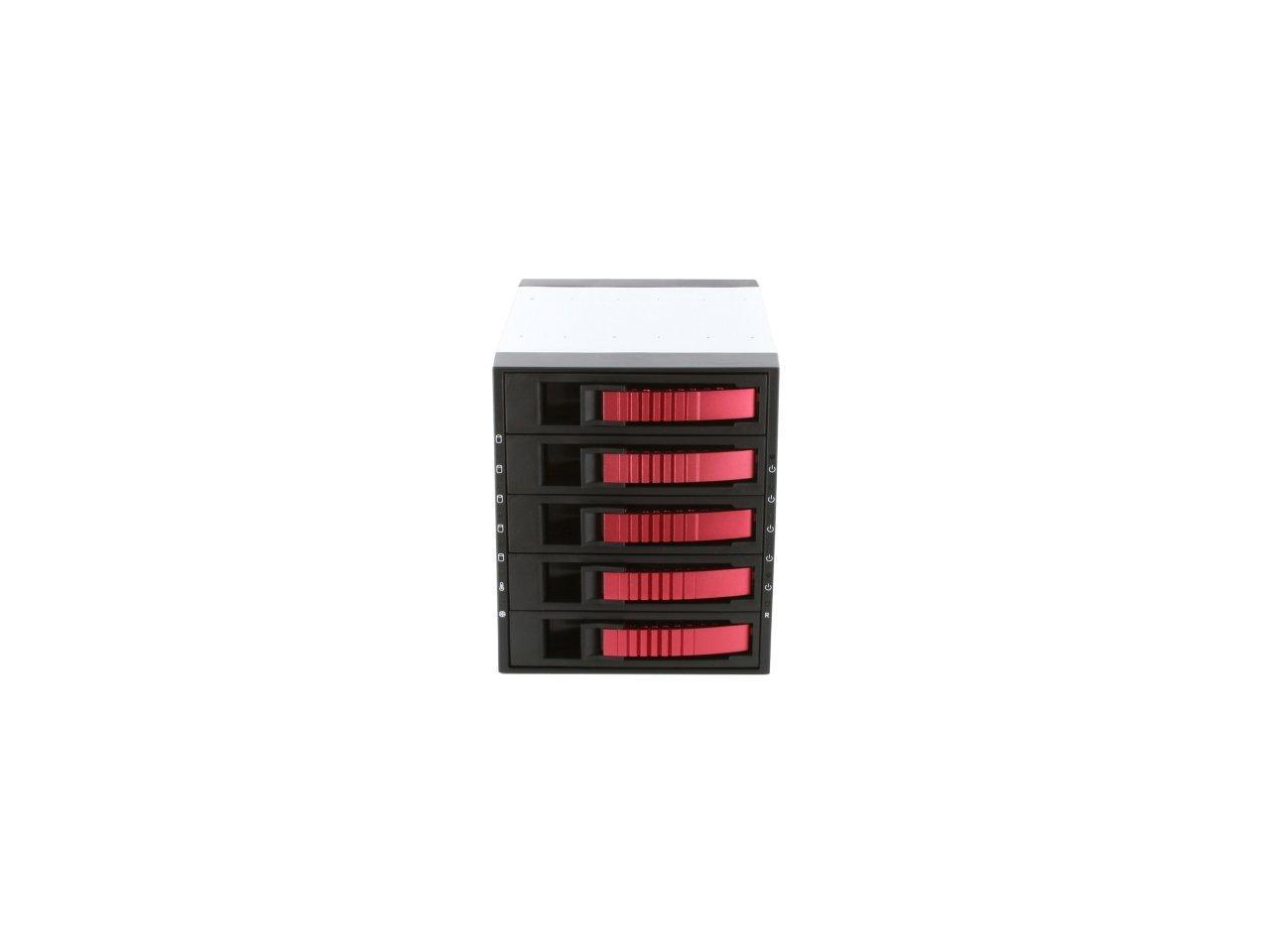 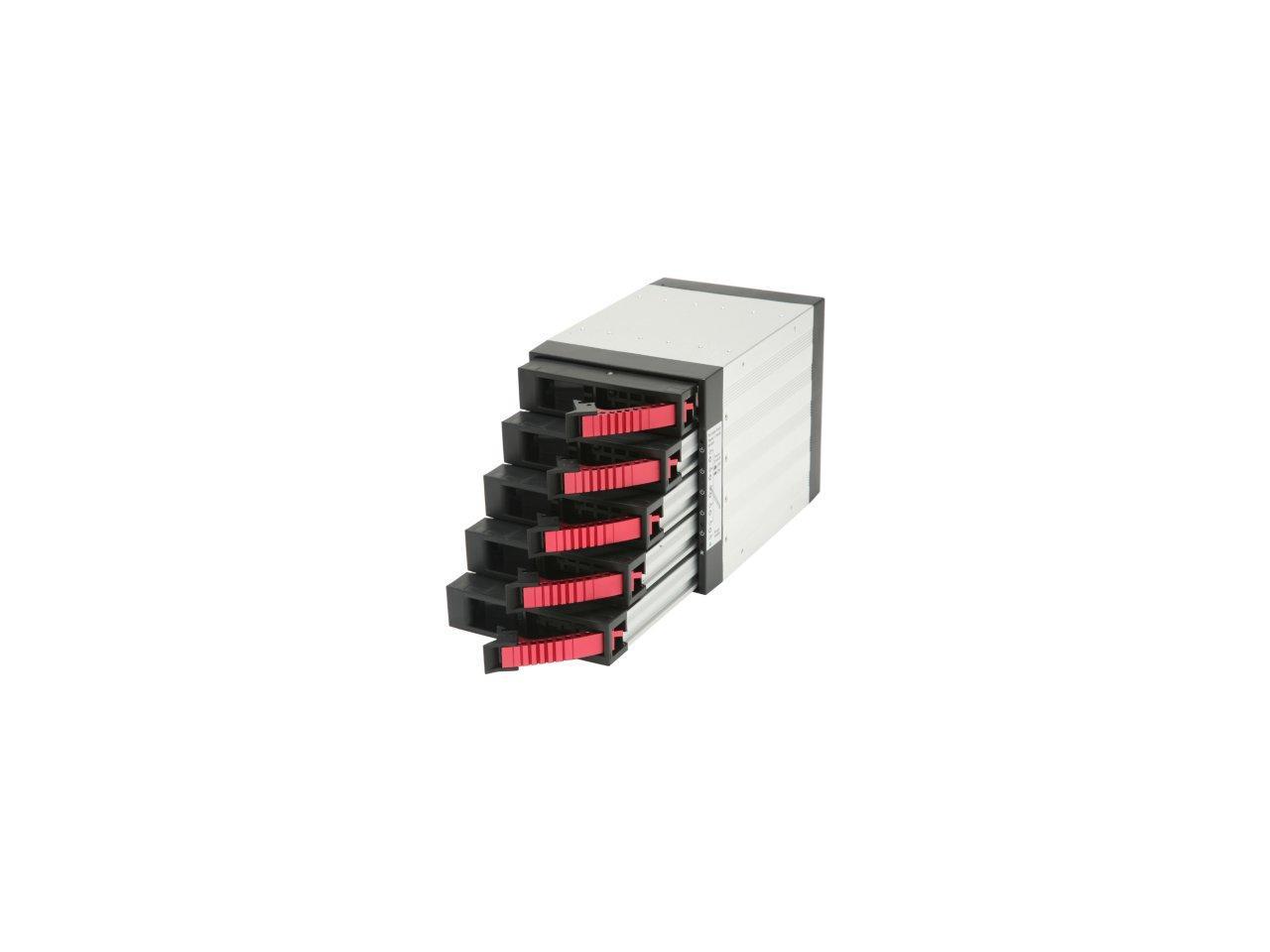 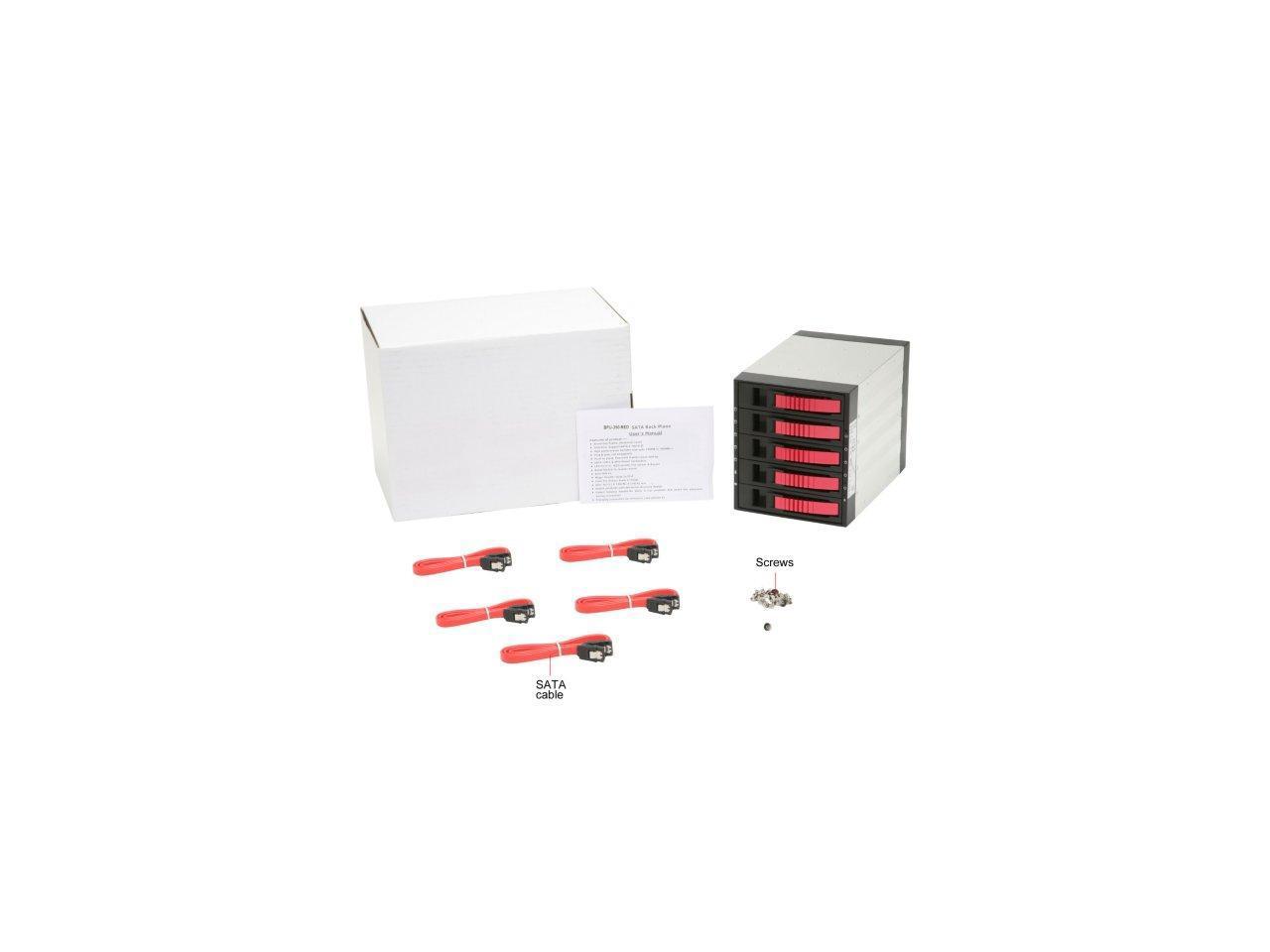 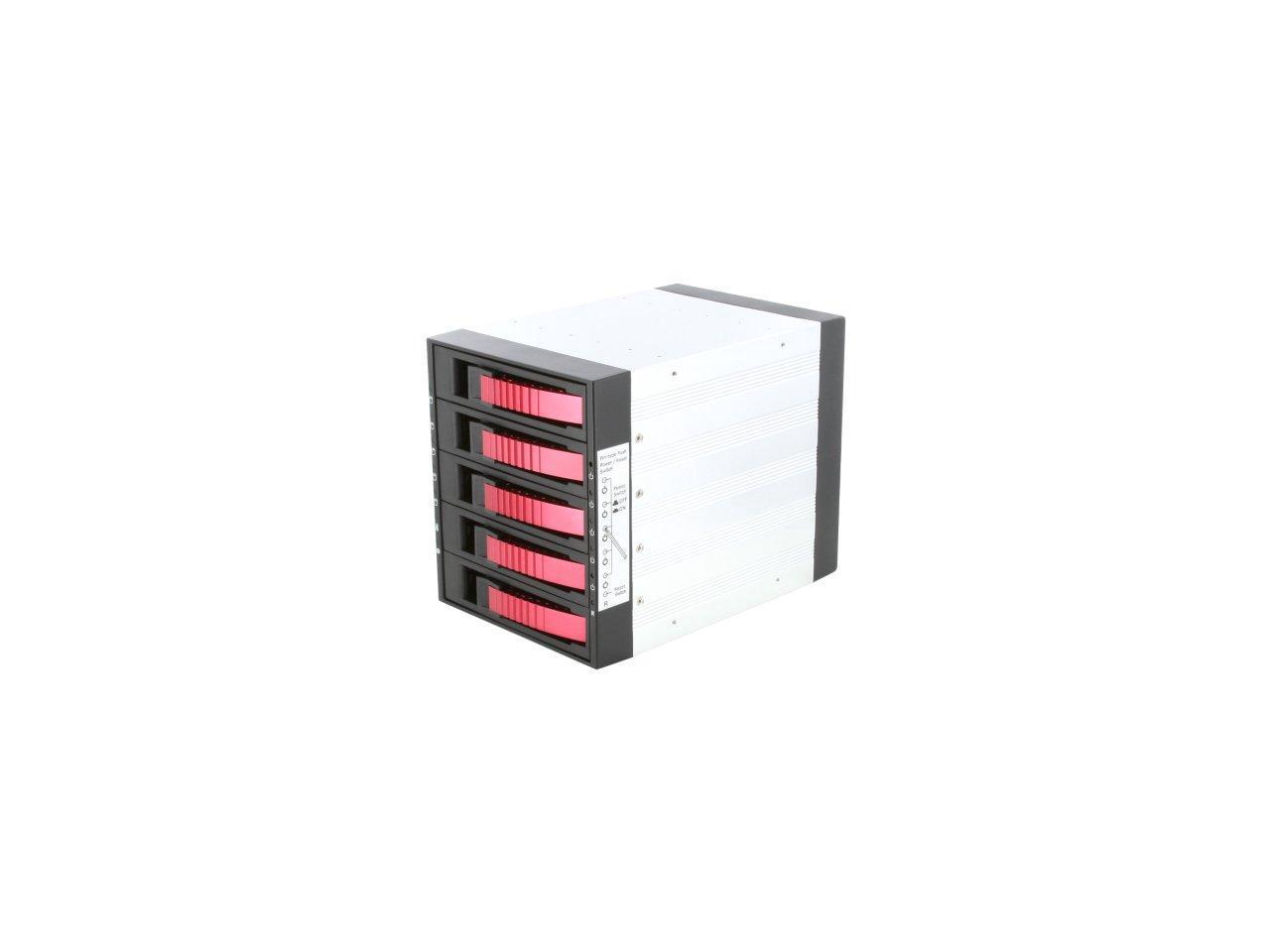 Cons: Be sure that you don't lose any of the custom phillips head screws for securing the drives to the sleds. Not sure where I'd find replacements if I ever misplaced them.

Overall Review: NOTE: The documentation doesn't mention this very clearly, but there are small power buttons next to each drive bay. You need to use a paper clip to depress each power button to power up the drive in that bay, otherwise you'll be left thinking your unit was DOA like I was for the first 30 minutes after I installed it.

Pros: Great construction, entire bay and tray cage is built from the same thick "square rod" style of "matte" aluminum. Not sure what to call it exactly, its different than the brushed stuff you get with cases but still aluminum. This type seems more durable against scratching. Trays slide in and out well, the handle latching mechanism is simple and confirms the drive is fully seated. They feel like decent heatsinks in their own right. Its also hard to see from just the pictures but the colored handles are actually anodized aluminum and not plastic. Comes with standard latching sata cables, even if you use sas breakout cables like me they're nice to have. Some bays don't come with cables...you could buy this entire unit for the retail brick'n'mortar price of 5 cables! Priced about the same as all the other 5-in-3 but from what I've seen this is the best built overall. I wish I could find an entire case made like this, though it would be really heavy.

Cons: Does not have indents for the cd-rom tab guides found in many consumer cases, so you will have to bend or cut those out if your case has them. Seems to be a common issue with many 5-in-3 bays, but less common with 3-in-2 or 4-in-3 bays. Many higher end or larger cases do not have the guides, or use removable rails instead. I don't think I've ever seen a decent rackmount case with the guides either, so its a moot point there. Fan is probably best left in slow mode unless this is in a server farm otherwise its noisy and airflow is a bit constrained anyways. Has connectors for all the leds and such on the back, but no idea how to wire them to the controller card connectors. The pin chart for this is somewhat unclear as is the chart for the card, so it will probably not get used. I can't complain too much, to get similar functionality that is documented and supported you usually have to buy preconfigured servers or entire san systems.

Overall Review: I really wish they still made the 4 drive version with a single 8087 SAS connector and this style of handle. Using mine with a 5x2TB "raid" array, pure HBA with file system parity/duplication instead of block parity so each drive is readable by itself.

Pros: 5 drives in the space of three with easy hot swap. Got to love this. Had mine over a year and still no problems. Easy to attach connections.

Cons: Not a flaw with the device, but a FYI. You're basically installing a 3 bay box. Any guide rails or tabs inside your drive cage need to be removed or bent down flush. Installing in older or cheaper cases are easier to work with in this regard.

Overall Review: Don't be a moron like myself, the 5 bay unit needs to be mounted with the drives vertical unlike any picture you'll see of this device.

Pros: Almost 100% aluminum chassis, which is always good. Drive sleds seem sturdy enough and they support 2.5" as well as normal 3.5" disks. Price was right, especially when other bays that are either the same price or more expensive do not match this quality.

Cons: None really so far. The manual could have been a little clearer on the fact that you have to push the LED buttons to power on the drives. There is a diagram on the side stating this but I didn't notice it until after I figured it out.

Overall Review: I didn't realize until I read another reviewer say that the spot where the LEDs are double as buttons to power up the drives. I had no idea this was the case until I read the other review and was going nuts trying to figure out why it wasn't powering up. I am using this hotswap bay as well as another iStar 2x5.25 to 3x3.5 bay in an HP ML350 G6 server. This 3x5.25" bay has a problem with the drive screws that act as a mount for 5.25" drives. Sadly, they do not line up properly so I am either going to have to leave it in the bay loose like it is now or drill some new holes so I can properly mount it. I was hoping there would not have to be any modding with this but I guess I was wrong.

Cons: Have to be careful when mounting this in a consumer tower case. I was aware I would have to trim the metal tabs in my HAF X case; however, couldn't get the screwless locking mechanism to work and then you have to be real careful when putting in screws as you could damage your HDDs. Needed super tiny screws to secure the cage.

Overall Review: Unlike what the pictures show, the only way to mount is with the HDD in the vertical position. Fine with me.

Cons: As mentioned by others, these have no grooves in them for cases with easy slide tabs. Easy fix though, i just straightend out the tabs on my case and fit perfect.

Overall Review: I have two of these in an Antec Nine Hundred case. I plan to buy a third at some point. I have 10 drives in a RAID6 configuration. HDD lights work as desired with WD and Seagate drives.

Pros: This is a pretty slick hot-swap rack. The aluminum construction helps dissipate heat, and the bays slide in smoothly and lock in nice and tight. I have 4 1TB WD Green drives running in this and plan to get another soon. If you're running a hardware raid 5, you don't really have the luxury of monitoring the raid health, but with this item, you can see when a drive is going and will be able to swap it before you have a big issue.

Cons: Doesn't have a built in raid card. That would be useful.

Overall Review: If you want a quality hot swap enclosure, this is your ticket.

Pros: The unit seems to work well at 6G speeds using Seagate Barracuda SATA3 drives. A similar Icy Dock cage would not work reliably with the exact same motherboard/drive/cable combination. The cables do need to be SATA3 rated, which is rarely marked on the cables (including the cables that come with this dock).

Cons: It gets a small ding for a noisy fan. The "auto" fan setting is annoying as the fan is constantly turning on/off. There also seems to be a high pitches squeal with the fan turning on. I'm not sure if it's the fan itself or the circuitry that's controlling the fan.