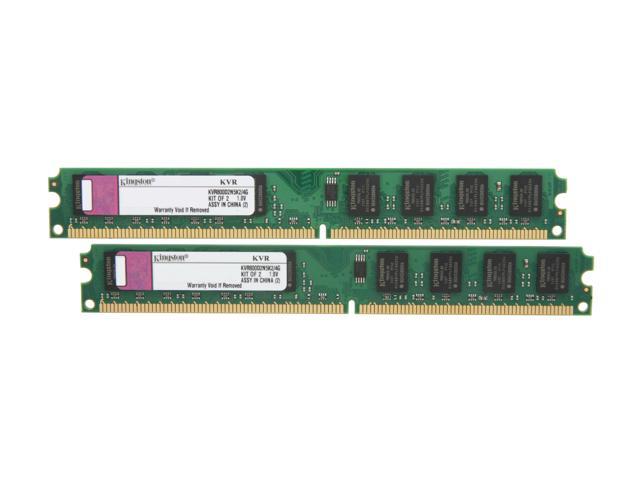 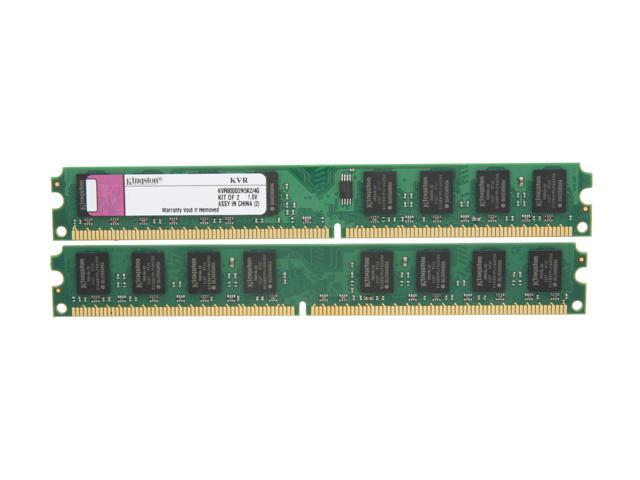 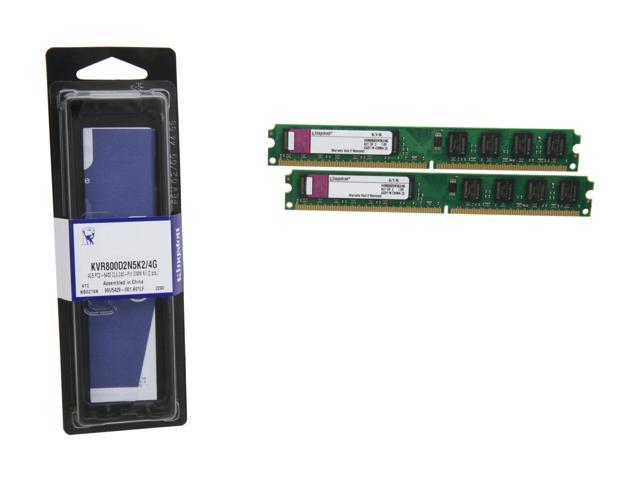 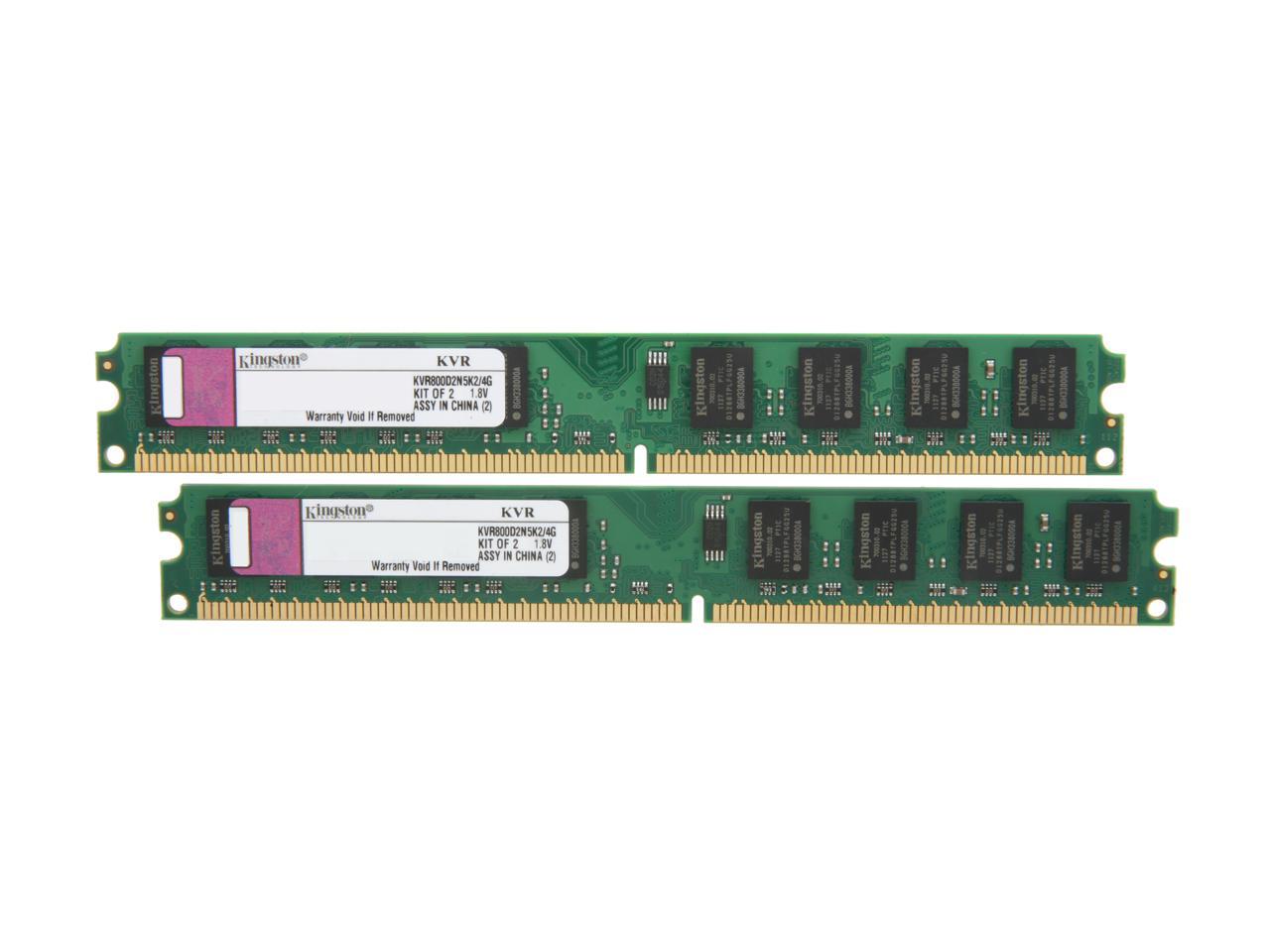 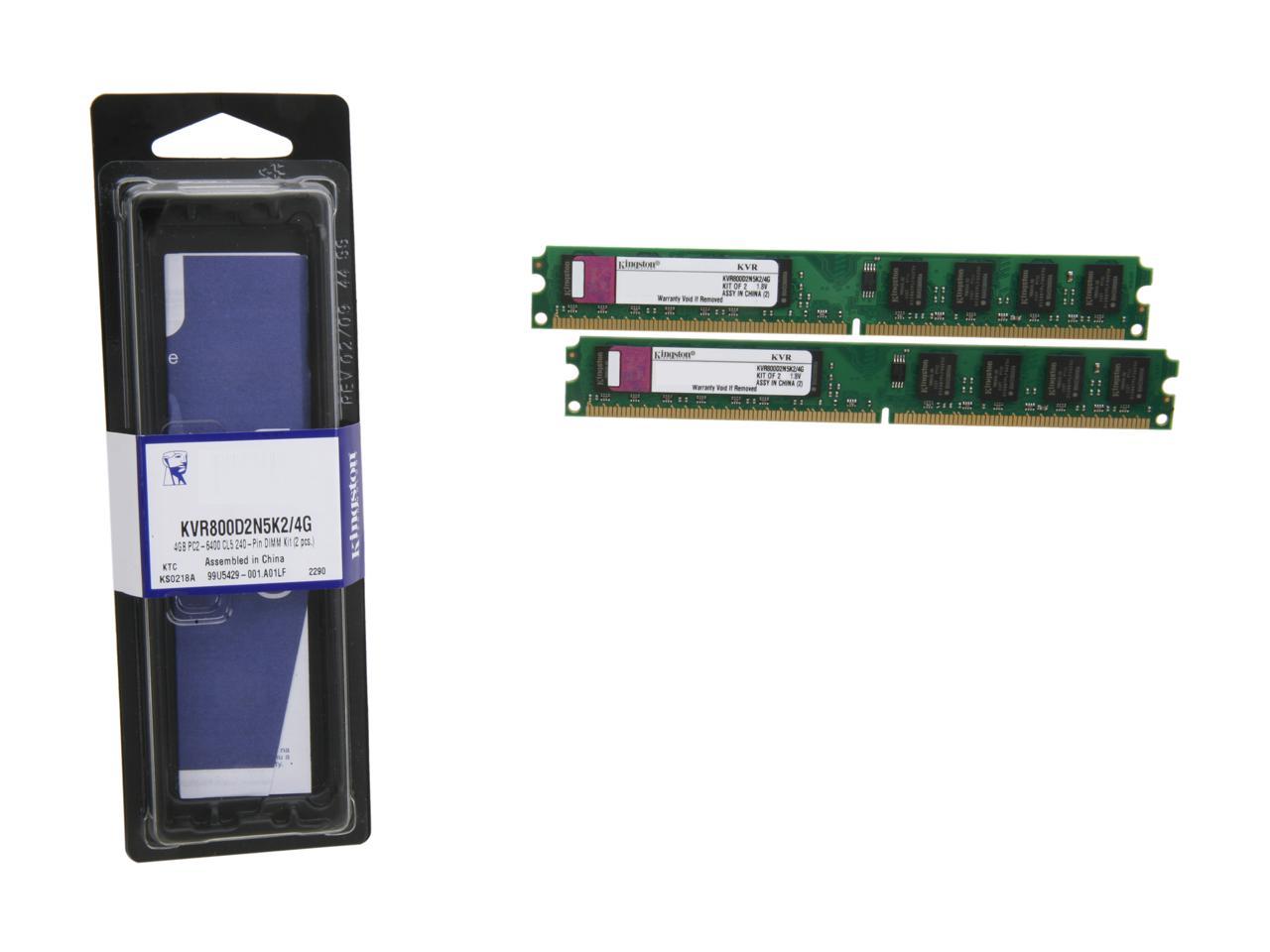 ValueRAM is Kingston's high-quality line of 'by spec' generic memory designed with the price conscious system builder, assembler and white box markets in mind. ValueRAM is backed by a lifetime warranty and is 100% tested both internally and through Advanced Validation Labs (AVL). AVL testing ensures all modules comply with JEDEC specifications.

Pros: I ended up with two 2 GB sticks, each labeled "KVR800D2N6K2/4G", "KIT OF 2, 1.8 V". The chips and boards were clean, but there were witness marks on the card-edge connector, where I believe they were previously installed in a socket. They are only about 3/4" (19 mm) tall. It appears to be genuine Kingston RAM. The hologram stickers look OK. All the text matches on the two hologram stickers. On the part number stickers, three out of the four lines match; the third line is different and might be a serial number (it is of the form xxLxx-x9xHxx-xWxxB). Each stick has sixteen Hynix HY5PS1G831C DRAM chips on it, plus the SPD EEPROM. The Hynix chips are additionally marked "KOR", "FP-S6 C 103V", and a varying line of the form "MWHABXEnxxn". I believe that "103V" probably means the third week of 2011 - more below. I installed these sticks with no other RAM. The system ran through one full set of Memtest86+ (about 30 minutes) and didn't show any errors. Memtest86+ detected the timing as 6-6-6-18. decode-dimms (Linux) also agrees with the 6-6-6-18 timing. It also says the RAM is "SSTL 1.8V", and supports CAS 6, 5, and 4. (I haven't tried it at anything besides CAS 6, though.) It also identifies Kingston as the manufacturer, manufacturing location 0x06, manufacturing date 2011-W10, and a 32-bit serial number for each stick. The serial numbers are relatively close to each other - about 5,000 numbers apart. Running it in the system, it seems to work OK. I can have a couple of separate instances of Firefox running and it doesn't swap, which is not the case when I had only 2 GB of RAM installed. As I write this, the system has been up for about 7 hours, running various applications, with no apparent problems.

Cons: Given the fact that these didn't come in original Kingston packaging, the probable January 2011 date on the RAM chips, the March 2011 date in the onboard EEPROM, and the marks on the edge connectors, I am pretty sure these are used. (I bought this RAM in October 2017). That's not the end of the world, but I wish it was disclosed somewhere on the ad. On the other hand, maybe these were enough clues that the modules were used: 1) This RAM was one andrew jackson, while the equivalent parts from mooshy kin, g'z kill, or coarse air start at twice that on Newegg. 2) Kingston sells these modules new on their site, but only on a build-to-order basis, and two modules would be about three times what this pair was. 3) DDR2 RAM is not exactly the latest technology sensation. The packaging was... economical. It shipped in a padded kraft mailing bag, 5" x 7.5". Inside that was a pink static-shield plastic bag, heat seamed down the middle to make a compartment for each stick, and then across the end to close it. It didn't have the plastic clamshell trays that new RAM typically comes in. On the other hand, free USPS shipping.

Overall Review: My Gigabyte motherboard has an AMD processor and AMD 740G chipset; the memory seems to work just fine with it. (In this era, some RAM was picky as to whether you had an Intel or AMD chipset.) My motherboard has only 2 RAM slots - it had 2x 1 GB coarse air sticks before this upgrade. I wanted it to run a little better than it did, but I didn't want it bad enough to go for a newer motherboard, CPU, etc. For one andrew jackson, this RAM woke it up enough to buy me another year or two of use, so I think it's a good deal. The parts shipped from Boca Raton, Florida, via USPS first-class mail.

Pros: I plugged it in and works great the first time and every time. 800MHz at 1.8v with 5-5-5-18 timings according to my motherboard BIOS. It runs cool enough that it doesn't need any heat spreaders.

Cons: A little more expensive than some of the other brands.

Cons: Stay away from this vendor. This is not new memory; it is memory that has been stripped out of systems and re-packaged. Lead time is also not great. So, if you need something quickly, this is not the vendor to use.

5 out of 5 people found this review helpful. Did you?
Manufacturer Response:
Hey Will L, Sorry to hear about your experience with the Kingston ValueRAM 4GB Kit. Are both module dead? Don't worry, your RAM is covered by a lifetime warranty, so just chat with our friendly technicians at http://www.kingston.com/us/support and reference Case#SR545671 so we can replace it for you. - Marcos @Kingston Technology
Dave R.
Ownership: 1 week to 1 month
Verified Owner
Solid7/5/2008 11:24:49 AM

Pros: It’s Kingston memory! Works great with my Intel DG35EC motherboard. Less expensive than some of the other brands.

Overall Review: For the price, get 8GB if you are running 64-bit!

Pros: this ram is great for my very small WHS case which has very minimal real estate for anything in it. I had OCZ ram in my server that was regular height and had head spreaders, but i took them out cause these kingston are actually faster, and the main reason is they are low profile. these are a must for any Mini-ITX, HTPC. these are also great for any other PC as well. the price is really great, plus free shipping really was icing on the cake!

Cons: none. these are awesome.

Pros: These kingston rams are fascinating. I've been using them for more than a year and have no problem so far.

Overall Review: would definitely buy more of these if they reduce the price a little bit

Pros: the price on these were good

Overall Review: Bought two for a total of 8gbs, for those who don't know......make sure you have a 64 bit OS if you want more than 4gbs