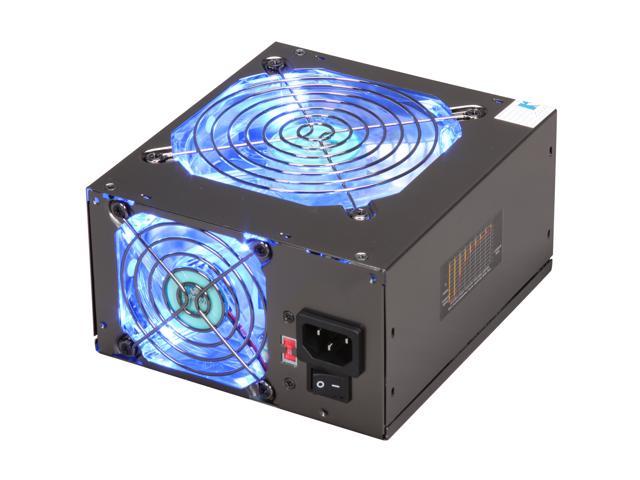 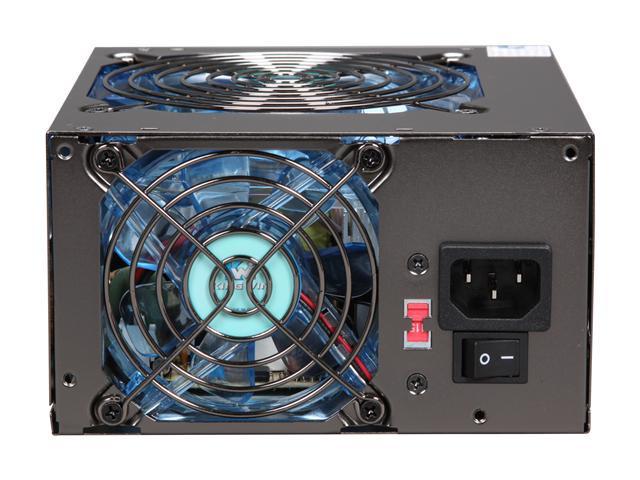 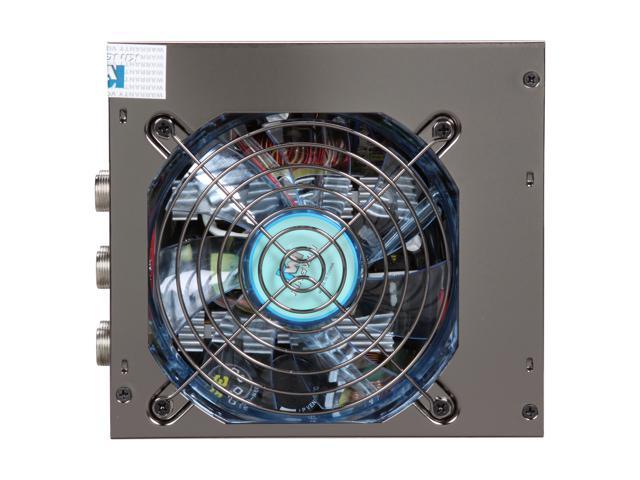 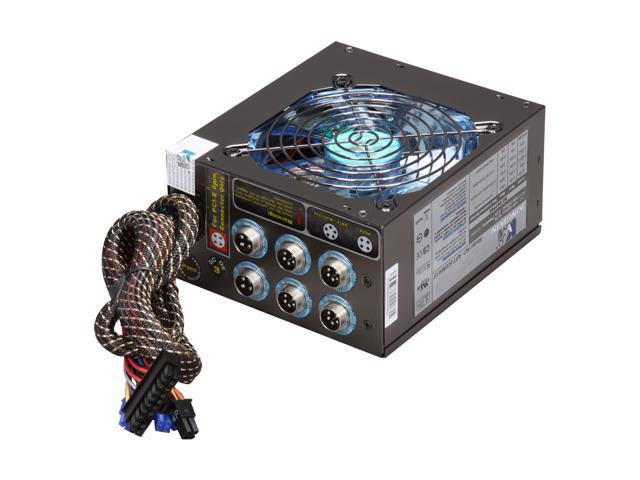 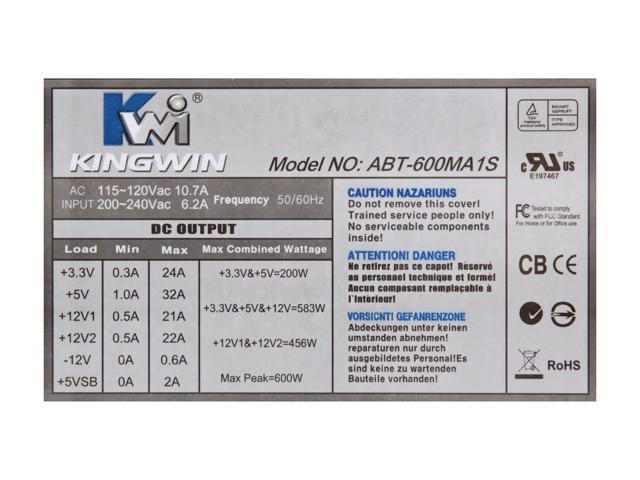 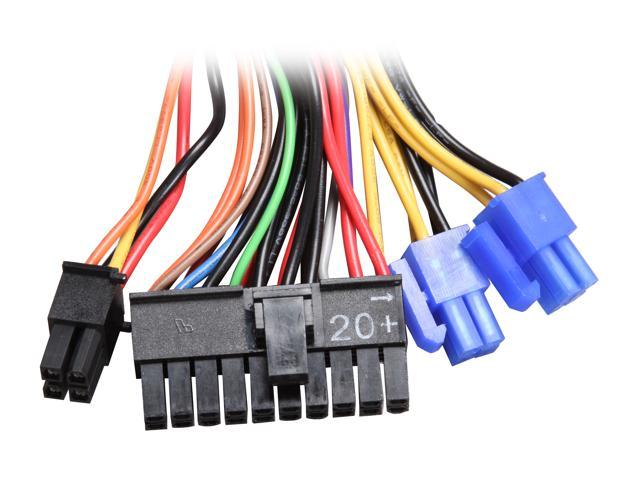 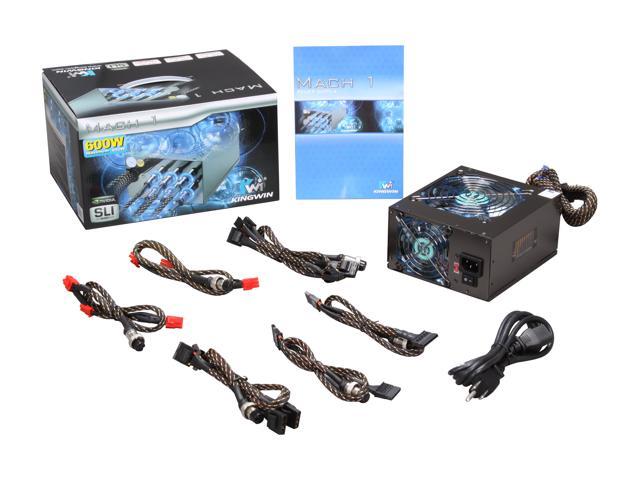 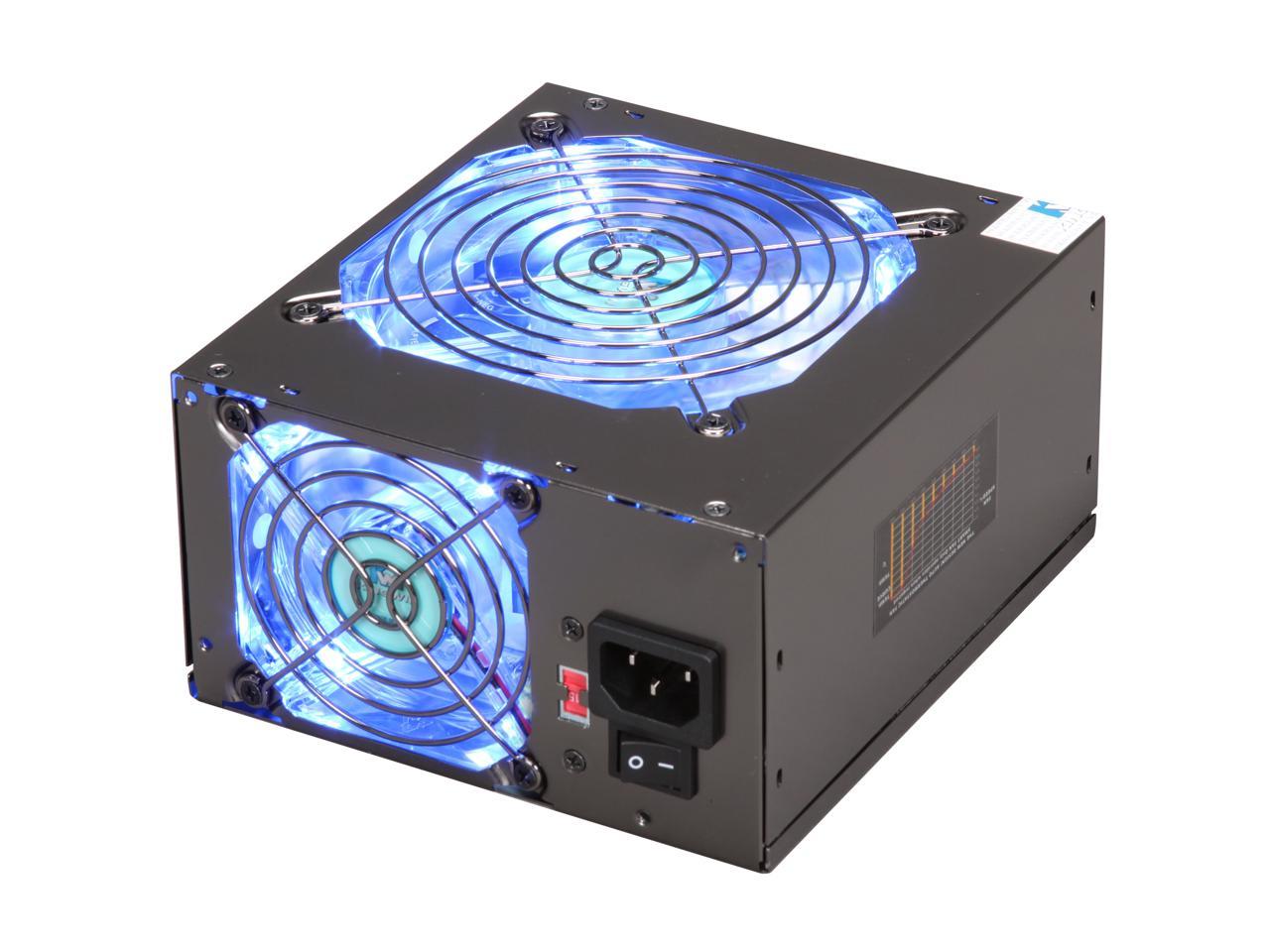 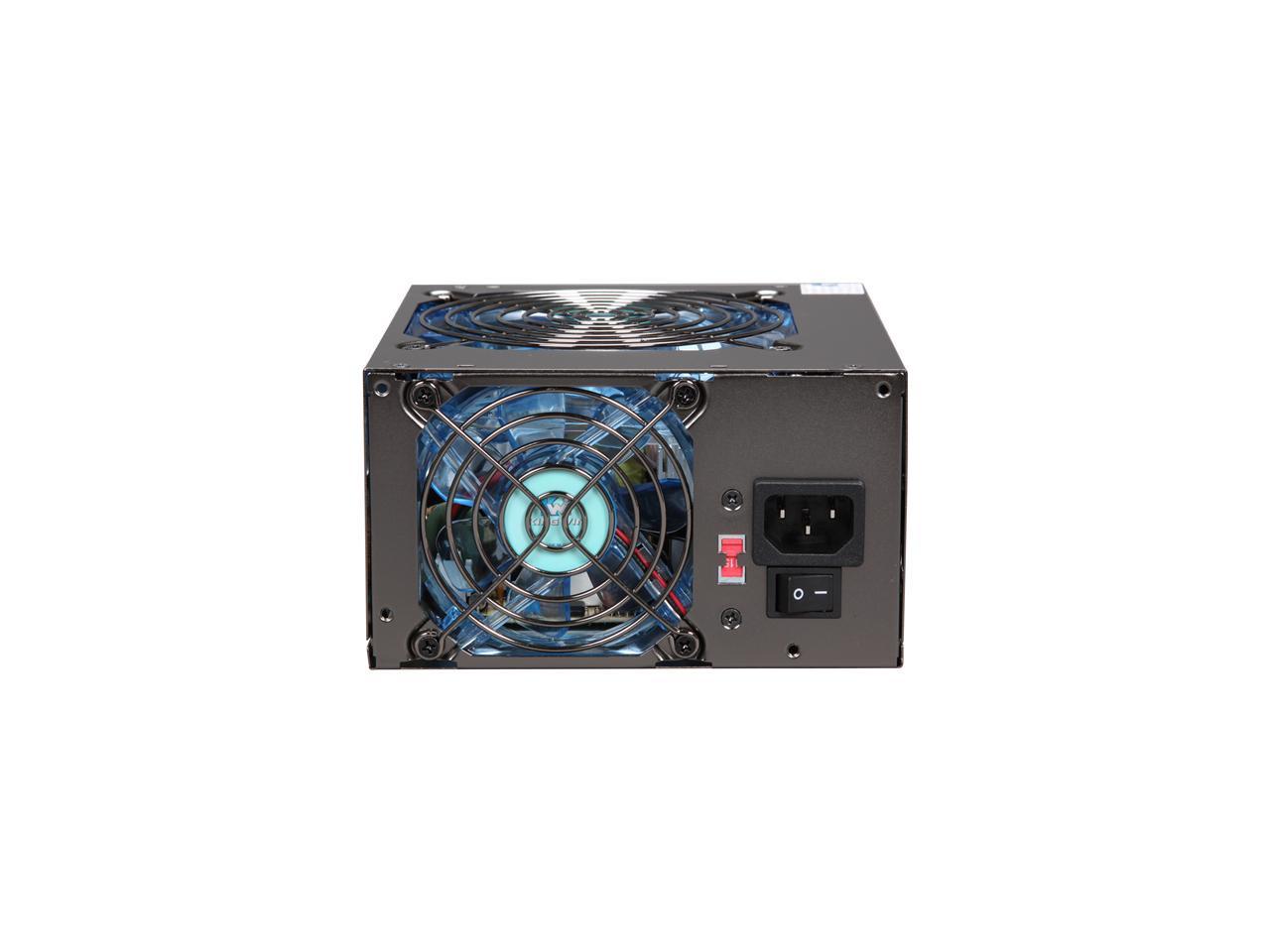 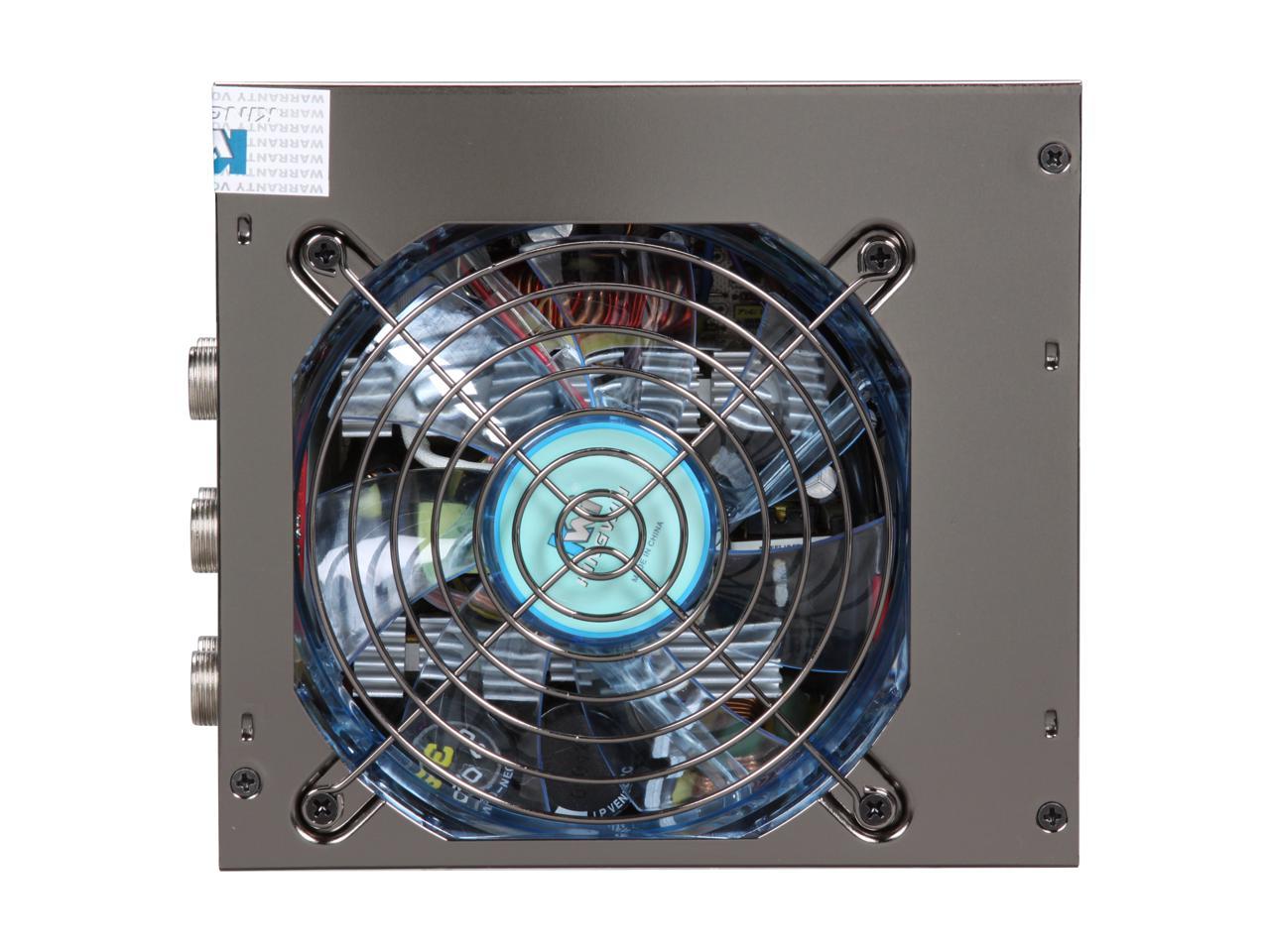 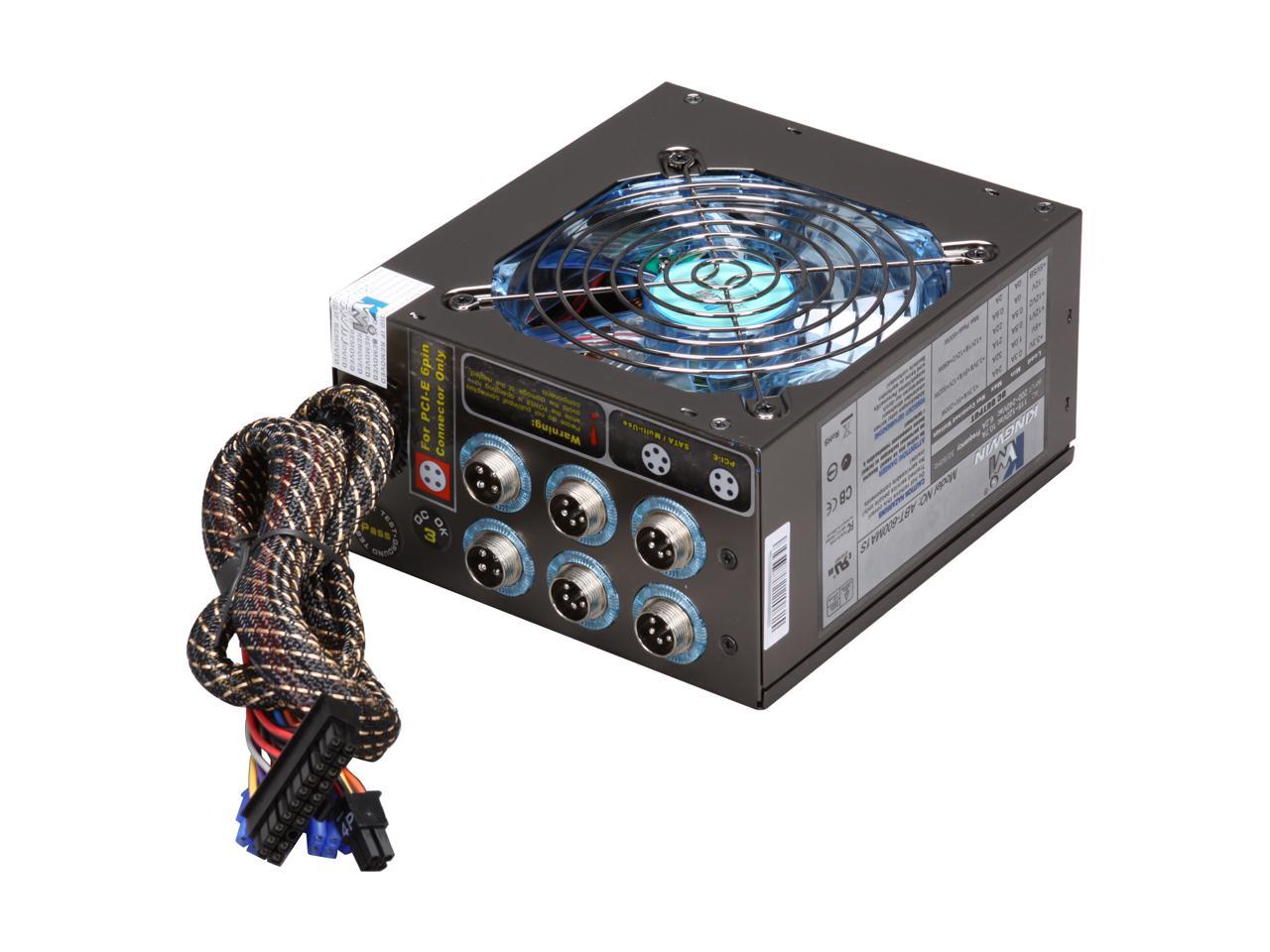 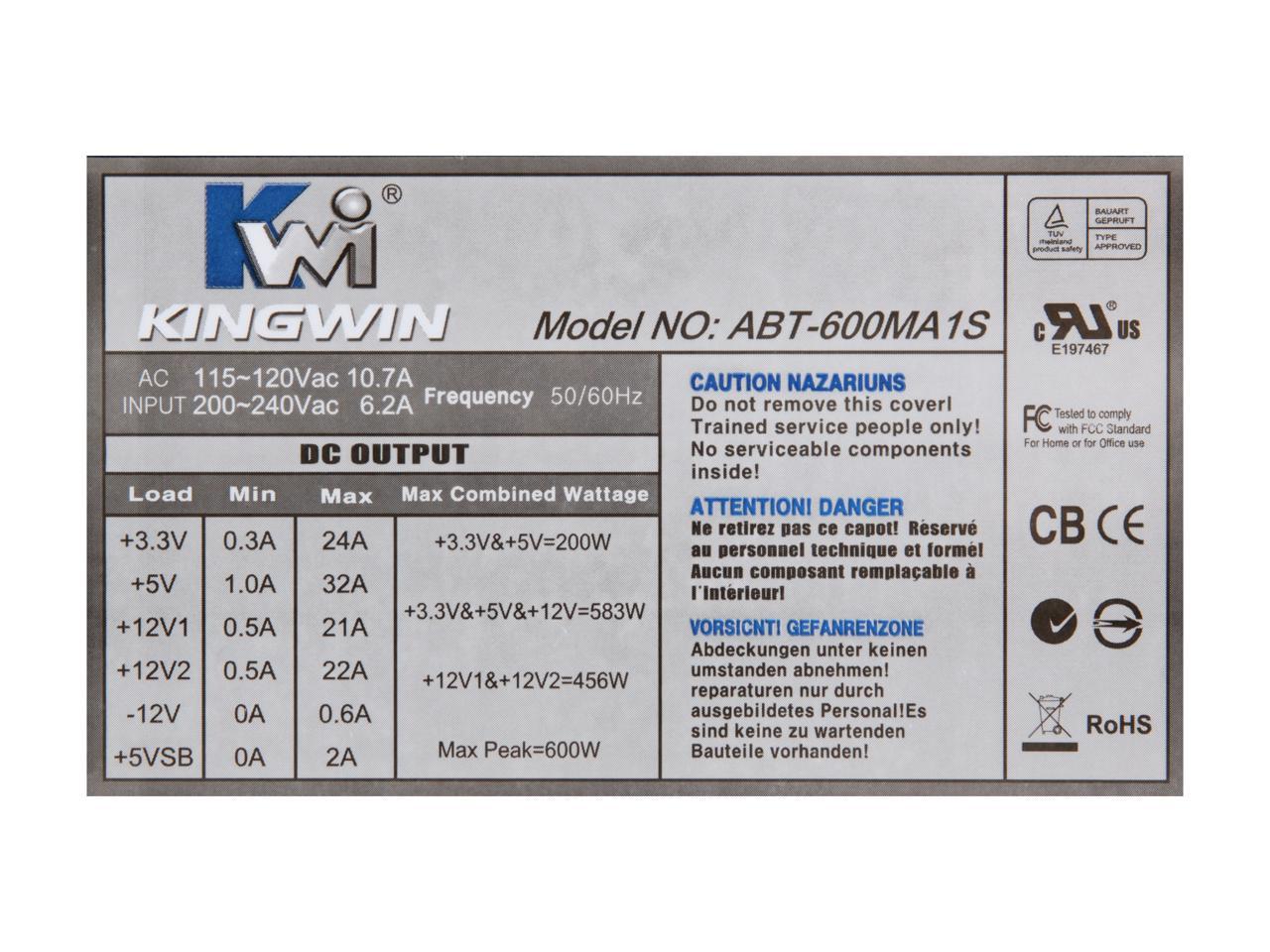 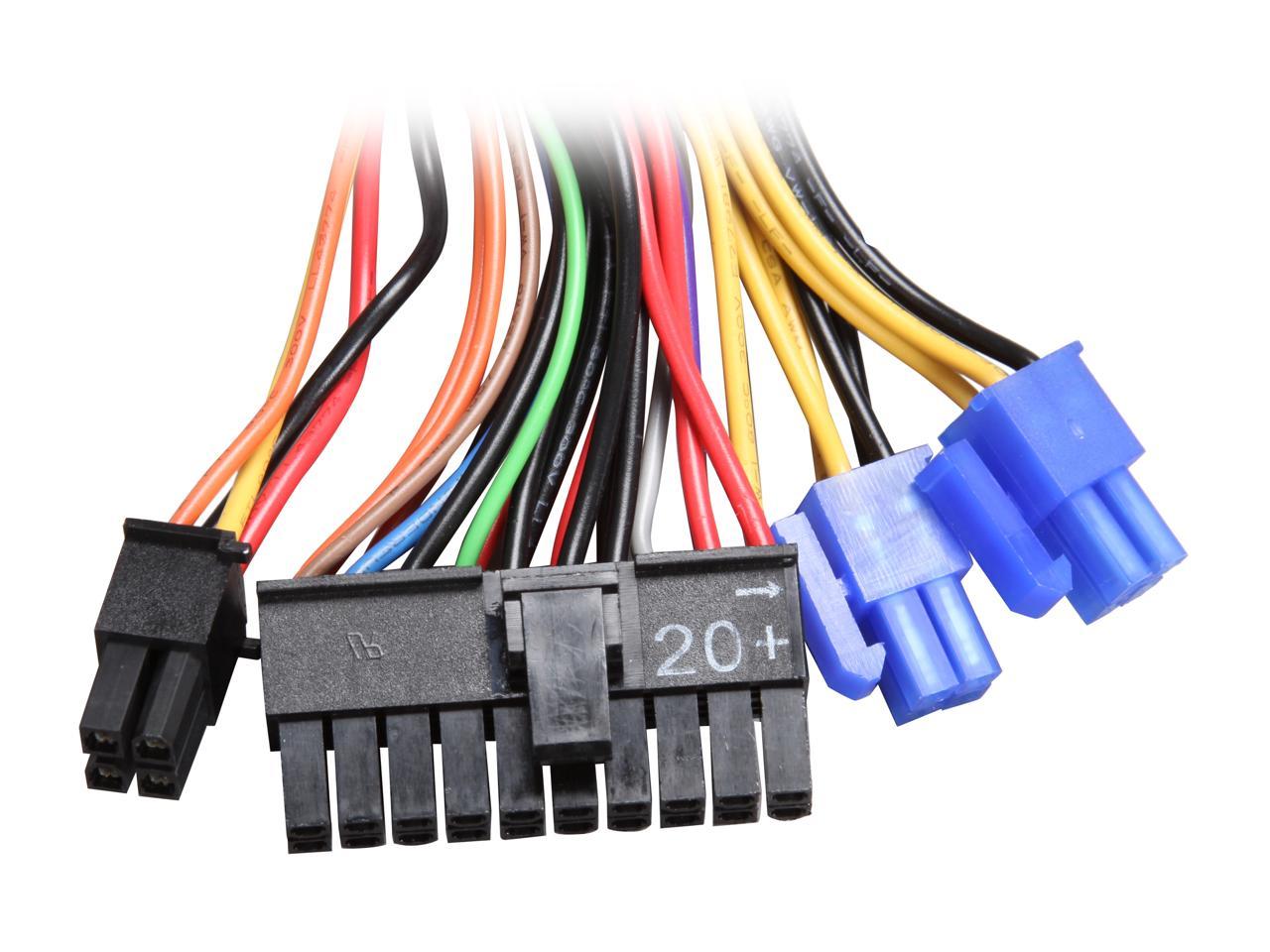 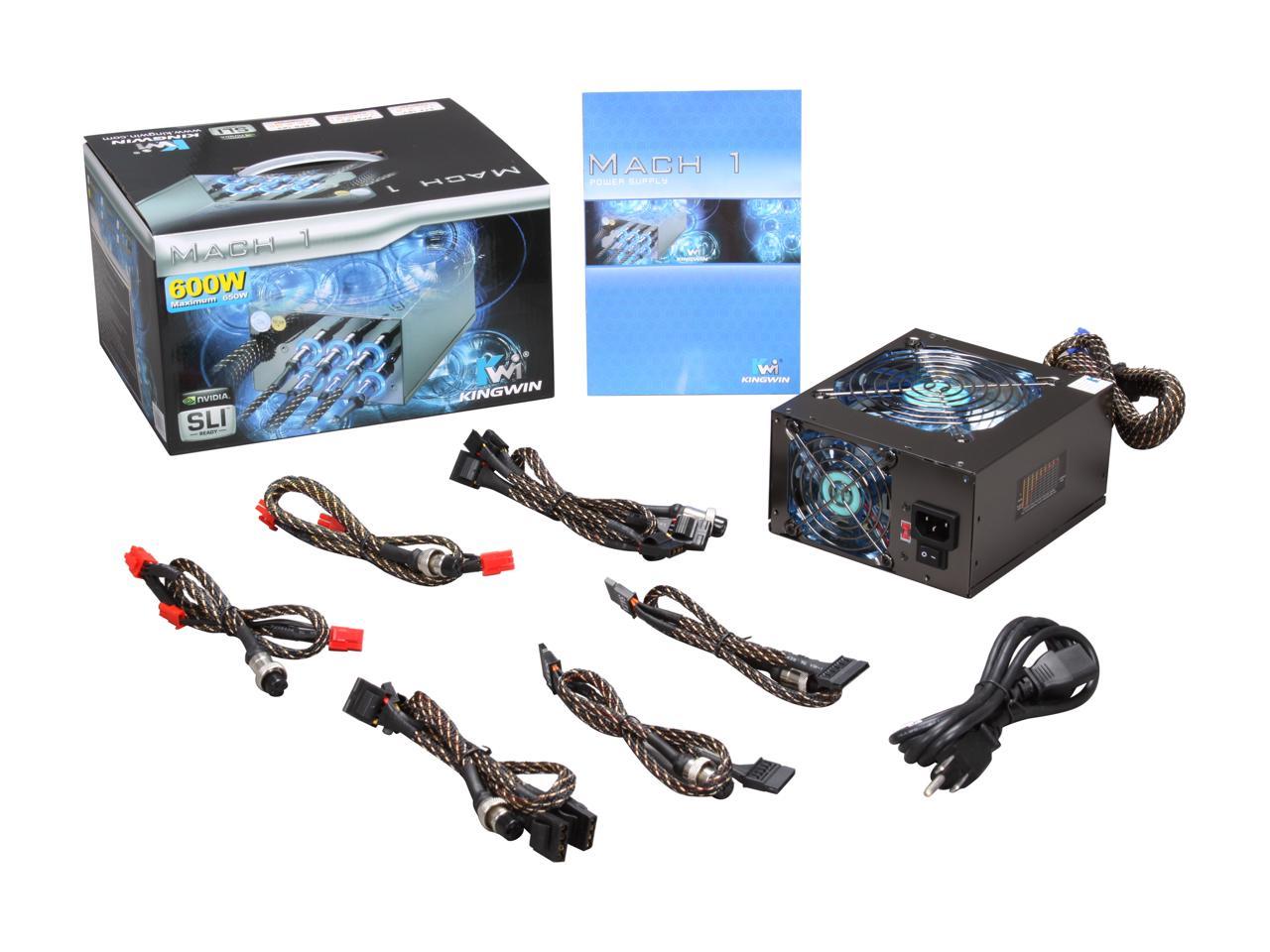 (100) Write a Review
OUT OF STOCK.
Overview
Specs
Reviews
So, you've tricked out your case with LED fans and maybe put in some supplementary lights and now you have this dark lump in the back corner.
But it isn’t all show and no go. It puts out 600W of power to run loaded systems. The modular cabling design lets you use only the cables you need. It comes with nine molex and four SATA headers. It also comes with both 4-pin and 8-pin 12V power connectors.
The PSU is SLI ready certified, and comes with both six and eight pin PCIe connectors. The connections at the PSU are specially designed to screw-lock into the place so you don’t have to worry about them coming off. Let your system take flight with Kingwin’s Mach 1 PSU!

Pros: My previous power supply's 12v rail was not supplying my 7800gt with the proper voltage and it was causing games to artifact and corrupt wow what a nightmare... The evga tech support told me to get a new one and i chose this beast and im am back to gaming and confident as i can be that nothing bad will happen with 600 watts of power and the 120 mm fan makes my cpu cooler 2.8 ghz A64 4000+ from 36C idle to about 32C, Great buy and extremely satisfied and the modular design is a godsend to my case and airflow thank you kingwin and newegg!

Cons: None at all also i really like that the two 12v rails supply 20amps each which allows sli config. to have stable equal power

Overall Review: price is almost to little to ask for such a great product i hope more people choose to buy this becuase i am very pleased and hope this review is helpful

Pros: At idle, it's quiet and runs very cool. At full power, such as running a high end game on the system or something, it's a little louder, but still runs very cool and the power does not fluctuate at all. The modular setup allows you to keep the case clutter-free and makes it easier to work with. I own a ThermalTake power supply as well and this one seems to be quieter... dunno if it is better though.

Cons: Owned it for quite some time, none so far. Fans still work, power still solid.

Overall Review: Very nice addition if you have a blue-themed case (Neons or other LED's). A little on the bright side, but compliments a good case nicely.

Pros: Love the modular connectors, excellent airflow off of the CPU.

Cons: None What so ever

Pros: Secure Lead to PSU connections (the modular cables are secured by screwing an attached cap down onto the unit itself)

Cons: None that I have found yet. Seems to be VERY solid.

Overall Review: I'm running a Core2 Extreme 6800, geforce 8800GTX, 74gb Raptor (main hd) and 4 150gb raptors (raid) on the asus striker extreme. 2 DVDr/rw and a bunch of extra peripherals (scanner , usb HD, etc My system runs very stable. I don't know from an over-clocker point of view, but running all my components at default specs, this psu certainly handles the job like a champ.

Pros: This PSU looks sick in my XCLIO A380BK Computer Case, the fans keep it at a low temp, nice color

Cons: none works great sofar, but it would be cool if the plug lights would stay on when the cable is not pluged in

Overall Review: make sure you have extra room, it is a little longer that a normal psu.

Cons: My 4pin mobo power cable was short, but this wont be the case for all users.If space is a constraint watch the front of the supply, and add about 2 inches to it. Account for that space

Cons: Cables can be a little stiff. I was able to work with them and get them to go and do what I wanted though.

Overall Review: This is the first modular PSU I have purchased. I will never go back to a conventional PSU again. Once again Newegg has delivered an excellent price with fantastic service.

Pros: I've been running this power supply for about 2 weeks straight, and it's been nothing but great. I have 4 optical drives, two hard drives, 6 case fans, PCI-E 6600 GT, Athlon 4000+, 2 GB RAM no problem. I was able to hook up everything and boot up without a hitch, which was very satisfying. The modular cabling gives you choices, i.e. if you don't need all the cabling, then you don't need to clutter up your case using them.

Cons: The modular cabling it has can make it an interesting affair to use. The cables don't like to bend very much from the connection to the PSU, about 2 inches from it, but if you have a Full tower case it shouldn't be a problem.

Overall Review: It runs slightly warm, but with a 120mm and 80mm fans on the sides I don't think it actually gets hot. As you can see in the pictures, there are 6 ports for cables, but it only comes with 5 cables. Not a big problem unless you must have two more SATA dedicated connections. I haven't been able to use the PCI-X power yet, but so far I have no reason to believe it can't handle a 7950GT. Also, don't be concerned by the 8-pin CPU connector. It ships with an 8-4 pin adapter, so if your motherboard doesn't have an 8-pin connection then there's no problem. As always, Newegg was the place to go with fast shipping.