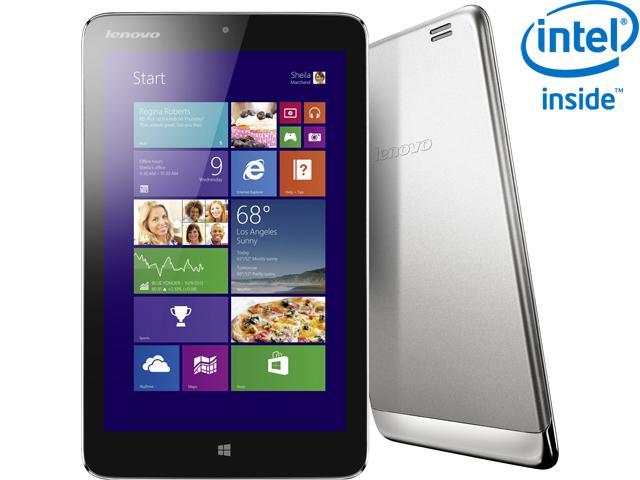 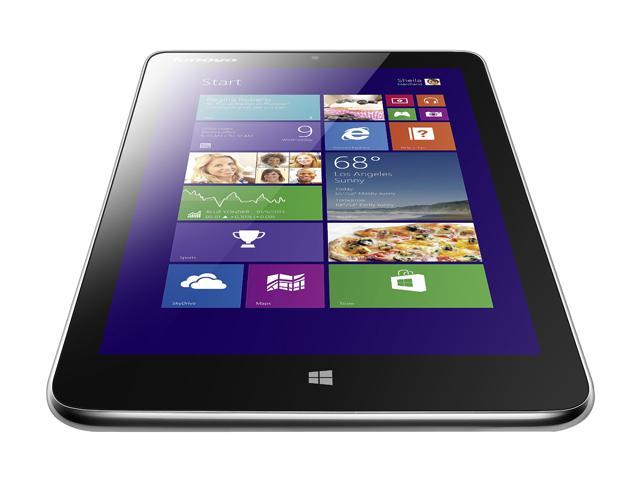 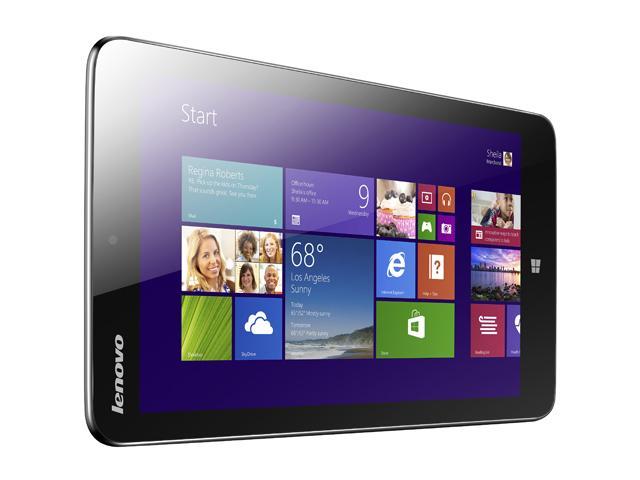 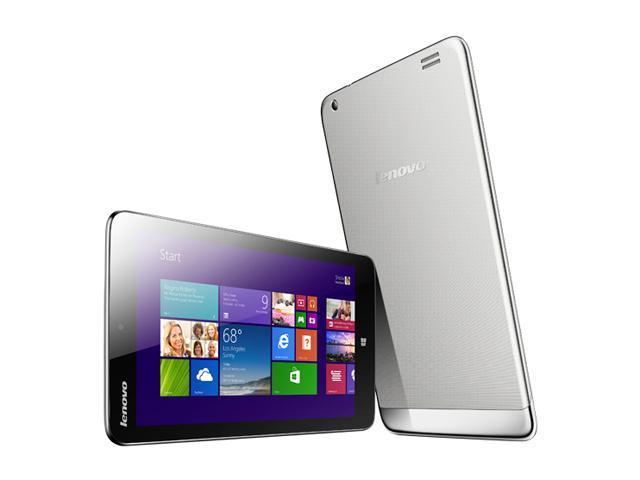 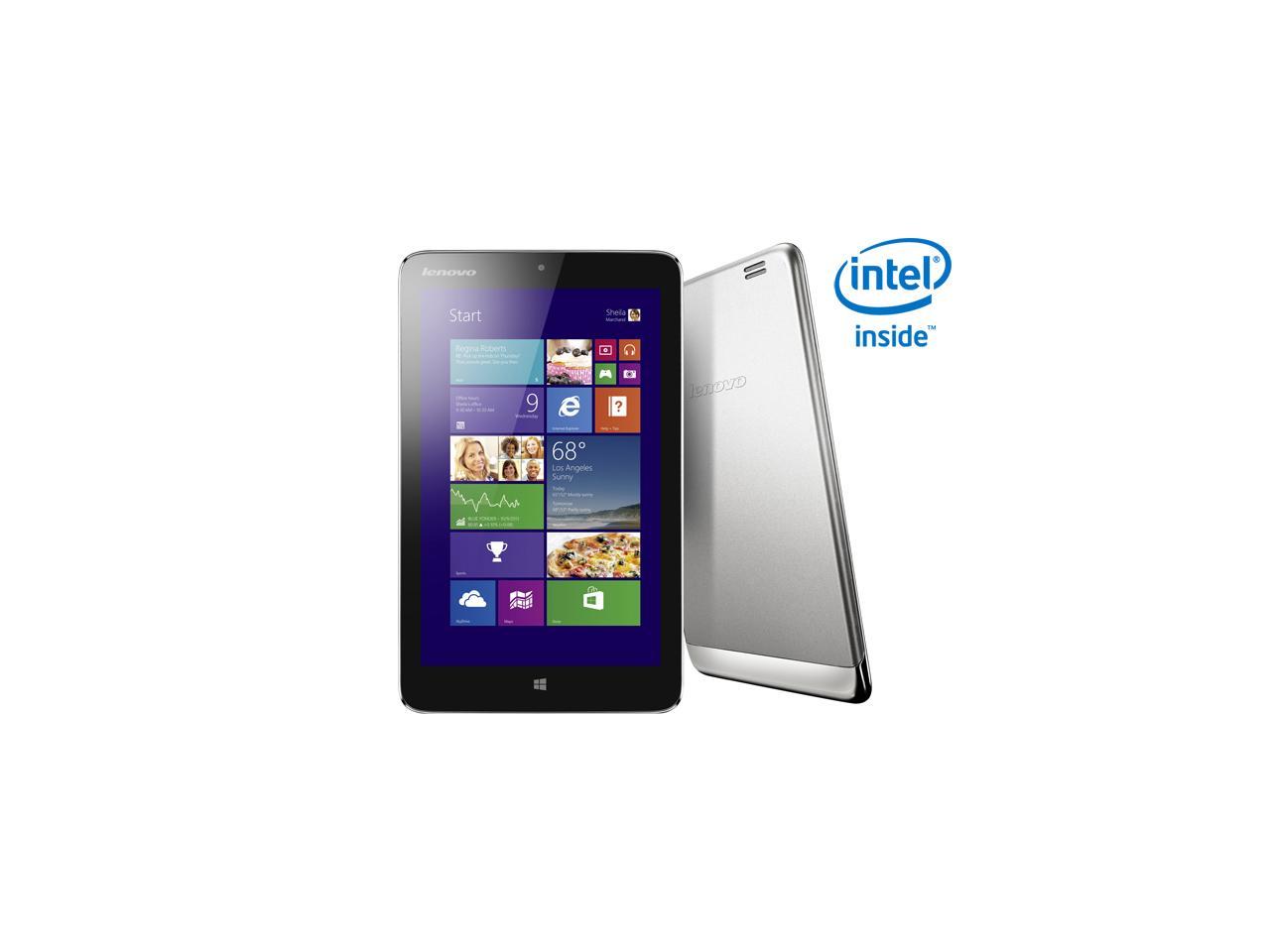 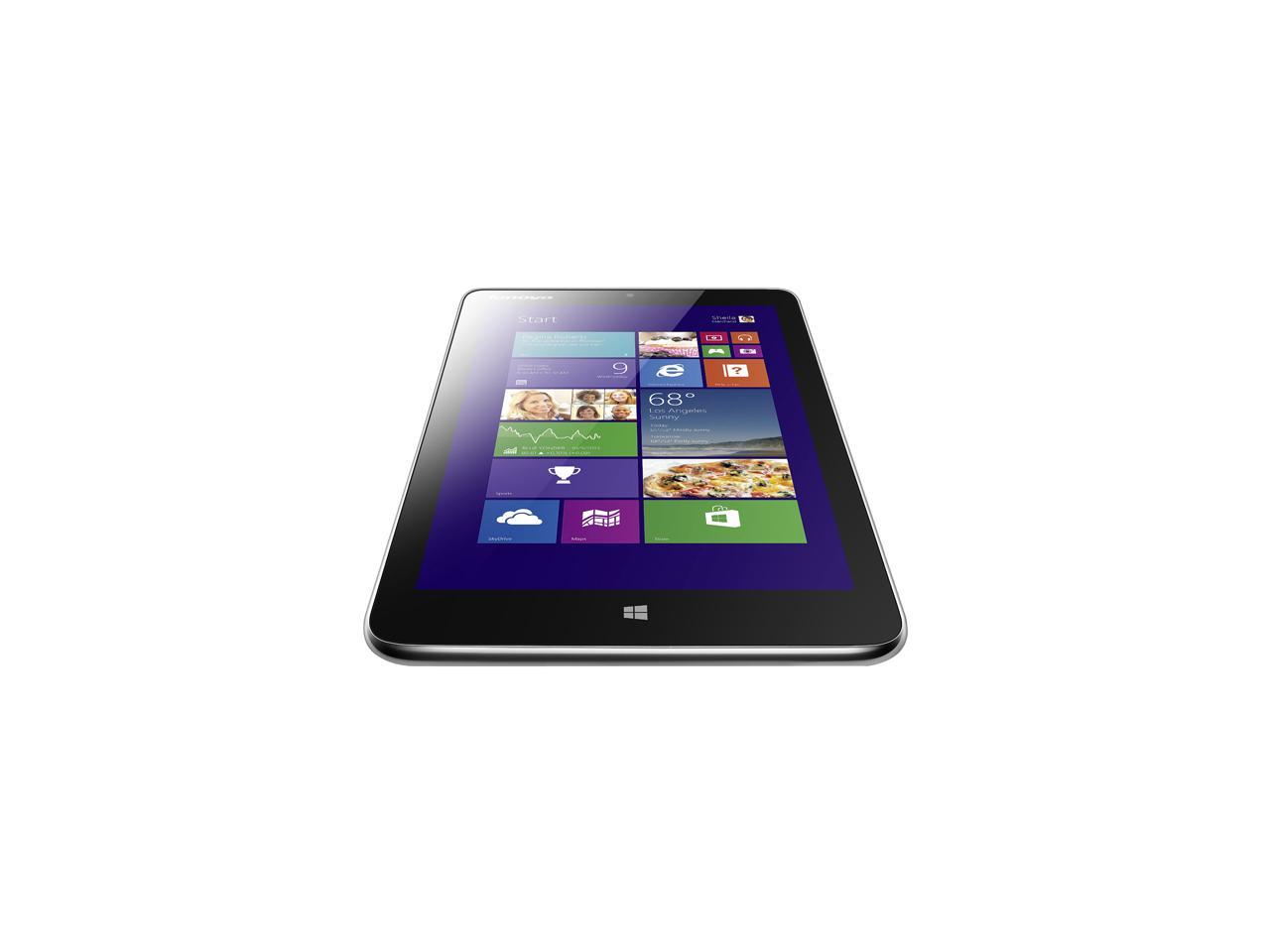 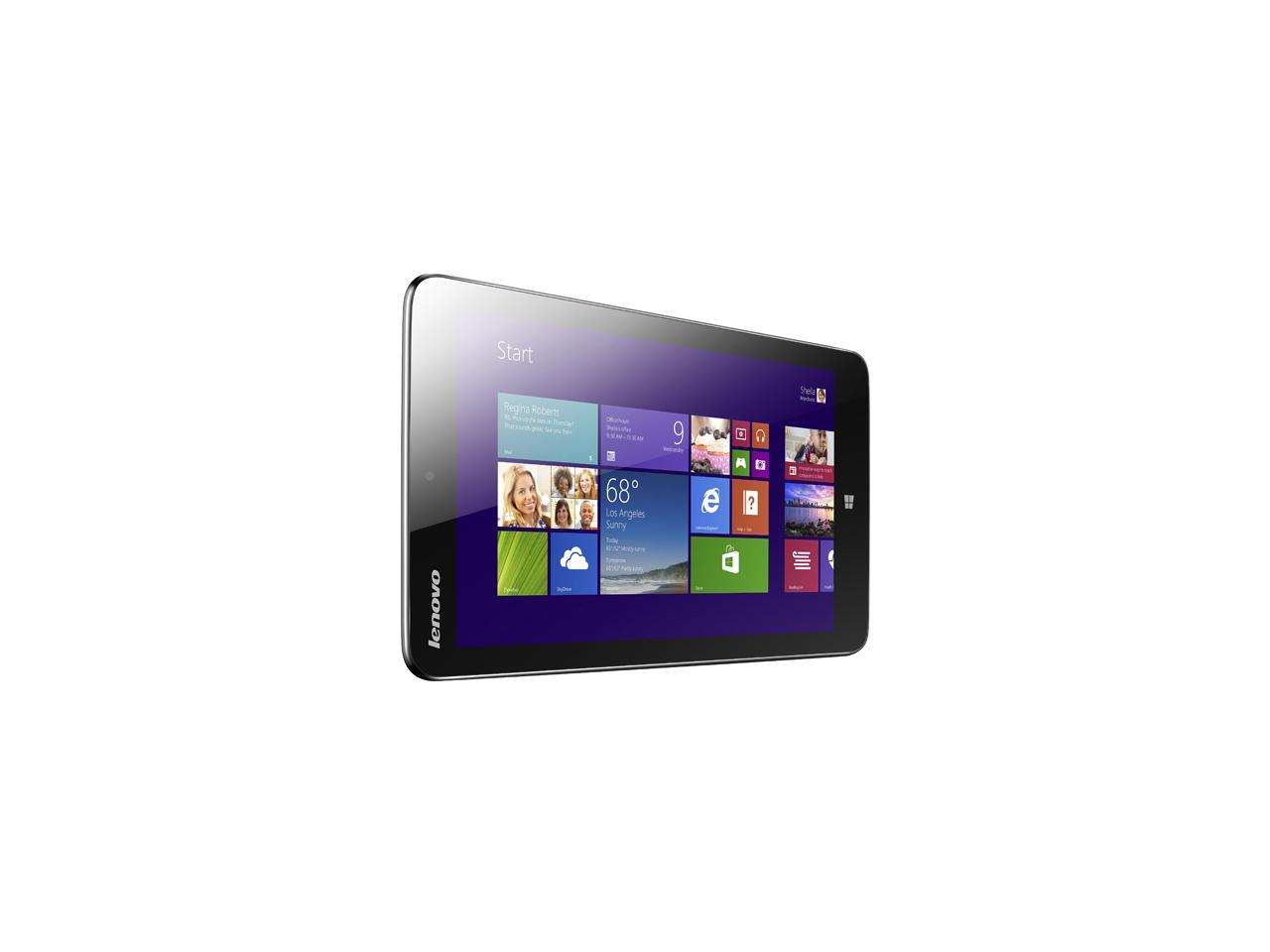 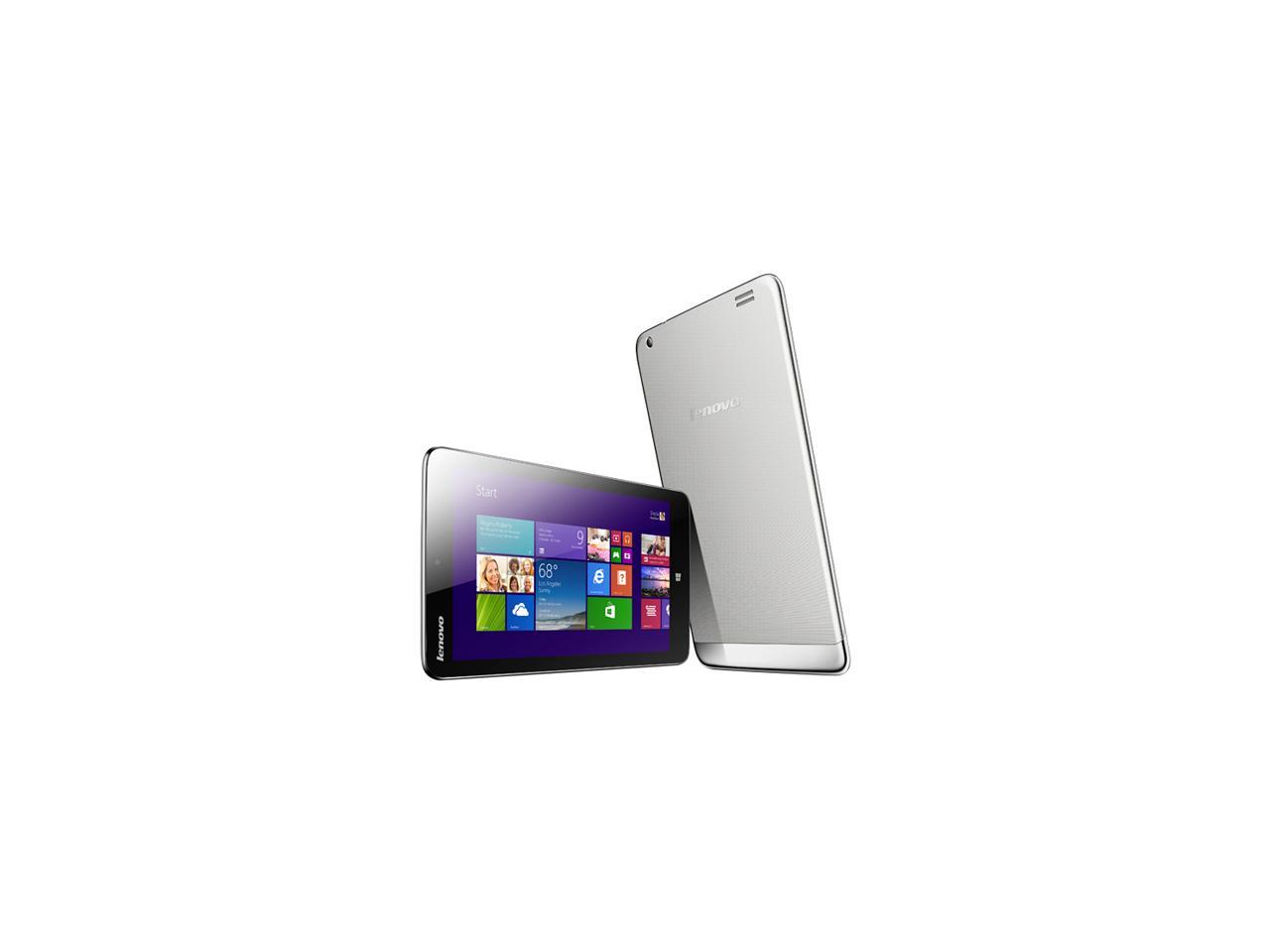 Learn more about the Lenovo Miix 8

Pros: It runs windows 8.1 very well. It boots up quite fast. 64GB Micro SDXC Flash Card works well. I have not had sufficient time to do a complete battery test but so far the battery life seems decent.

Cons: GPS is present and does work but only about 25% of the time. I would not use this device for navigation purposes. Although Neweggs' specifications page says it has a HDMI port it does not.

Overall Review: I also got the Flip Cover With Stylus. The cover fits nicely and the Stylus has a thin tip which works very well.

Cons: Don't buy the Lenovo cover unless you just want something to cover the screen.

Overall Review: I purchased this tablet for my wife for Christmas. She likes to have a "PC" while being mobile. She also uses the tablet for hours at a time for Web Browsing, Social Media, eMail, and she loves Solitaire. I was a little skeptical about this tablet because it was recently introduced at the time of my purchase. I was trying to think of some reason "not" to give 5 Eggs for this product, but I really can't. It has a beautiful display, its light, battery lasts most of the day, performance is above expectations for a "non" "I" type processor, and surprisingly it comes with the "Full" version of Windows 8.1 and a copy of Office (full, not trial). The only "Con" I could come up with was the "Cover" that Lenovo sells for this tablet. It's just that, a cover, much like the Apple cover for its iPads. It also comes with a Stylus. If that's what youare looking for, it might fit your needs, otherwise you'll have to wait for the device case industry to catch up for this new device. The device in my opinion fills 8 inch Windows tablet space very nicely and my wife and I are very satisfied with this product.

Pros: Battery life on it is amazing! The CPU is very powerful, for a cheaper Tablet. Storage space is great! (Get the 64gb and stick a 64gb SD card in, you'll be set.) Gaming on it is actually enjoyable. I'll make a list of all the games I have tested and played on mine so far in the other thoughts. Super bright screen (which doubles as a con) FULL WINDOWS 8.1. Free version of Microsoft Office. Thin and light, fits in my back pockets!

Cons: Super Bright Screen. While this is great in light areas, you can see the screen crystal clear, it kind of sucks when you're in a dark room, because even at the lowest brightness setting it is still SUPER bright. The only other con is that I can't find a a nice case for it. Since it's a sleek little device, I want to keep that and not ruin it with a bulky case. But sadly, I can't seem to find a good, slim case anywhere. I was something like the iPad has, just a screen cover. But sadly, all I can find are big bulky cases. So for now, I'm not going to buy a case.

Overall Review: I really do love this tablet. I have a friend that bought a Surface Pro 2 and he spent $1000 on it. I is powerful, but he just does work stuff on it. I bought this for $250, and it can do everything his can do that he needs to do with it. I love it! It is also pretty good at gaming. Here is a list of the games I have installed and working perfectly on my Miix 2 (I bought a wireless mouse and keyboard set to make gaming better.) -League Of Legends -LEGO Lord Of The Rings -Hearthstone -Prince Of Persia: The Sands Of Time -Warcraft 3 -Starcraft -Age of Empires -RPG Maker VX Ace -Worms Armageddon -Sim City 4 Deluxe -Roller Coaster Tycoon 3 -Max Payne -Half-Life These are just the games that I have installed and played without a hitch. LoL drops down to about 40 FPS when in a bigger battle, but other than that, it runs at 60 FPS. (All these games are running at lowest graphic settings, but they are enjoyable as high FPS.) In closing, I LOVE this tablet! It's incredible! And if they make a Miix 3 in a year or so, I'd probably buy it.

Pros: I use this thing for comics, light work (I'm a programmer), video games, media, and web surfing. Pros: - SUPER light. I can hold this in one hand all day long. A lot of tablets I've owned (including older iPads + Nexus 7) are too heavy for their size and your hands hurt from holding it. I can read all day on this and not get bothered. - Fast as hell. It's hard to tell this is running a quad-core Atom processor. Everything is super snappy. If you're a power user like me, then every once in a while you'll find a program that reminds you of the limitations, but in general it's insanely quick. - The screen is really pretty. My only complaint is that it doesn't get dark enough for me to read comfortably in the dark. Flux helps, but it's not perfect. - The battery life is awesome. I use it for days between charges with about 2-3 hours per day use. - It's very capable for light gaming. Here are the games I've played so far: --HearthStone. Medium settings, native resolution, ~30 fps. --Dota2. Low settings, native resolution, ~30fps. --Diablo3. Low settings, native resolution, ~30fps. --World of Warcraft. Low settings, native resolution, 45+fps.

Cons: There are some cons, but they are to be expected for a device of this price: - Connectivity blows. I use Bluetooth for everything on it, but it'd be nice to have a USB port that isn't OTG. There ARE work-arounds (you can use certain hubs to charge the computer & use USB at the same time), but they are a pain. - It's made of cheap materials on the back. You can hear it creak when you hold it certain ways. This being said, it hasn't shown any obvious signs of falling apart yet. - The screen is slightly too small for on-screen keyboard to be comfortable to use.

Overall Review: If this fits your needs, then buy it. There isn't anything better for the price.

Cons: My major gripe is the storage space, even with just Office 2013 installed you are very short on space with the 32gb version. The recovery partition is almost 7gb alone. The SD card saves you here and I knew going in that this would be tight on space so I can't knock it that hard.

Overall Review: This is a sub $300 device, it works well for general internet, documents, Facebook junk, and simple games. Do not expect it to be on par with a device that is almost 2x the price. It works as well as the first gen Nexus 7 from what I can tell, but in my opinion you can do way more with this device than a Android or iPad. All of these devices have their place, I own all of them and use all of them, just read and know what you are getting into before you buy. :)

Pros: Bought this unit at a Newegg bargain price. What a great buy! Battery life is excellent at 8+ hours. Cold boot for windows 8 32 bit is about 10 seconds. The unit is solidly built, and VERY light and portable (.80lbs).The computer can be used in a variety of setups (explained below), and is very versatile. Performance of Windows 8 32-bit is very fast. The capacitive touch screen works very well. The Musemee (extra purchase) Pen provides almost perfect screen writing capability. Finger touch also works great! I found the 64 GB SSD drive to be perfectly adequate. About 35 GB is available for programs. I added a 64 GB micro flash card for storage of PDF's, and data files. Formatted NTFS, the typical access time is virtually instant to the files and program on the micro card. MPG2 movie video files play perfectly. The 8" screen and extremely light (.8 lbs) weight makes this unit a superb portable device. I added a micro usb to female usb plug ($2. and a Y-connect usb cable. Thus, I now have the ability to both charge the device, and connect a powered usb hub. With a external usb-to-Monitor connection, the unit functions as a desk top replacement. My unit came with Microsoft Office 2013 - included! In conclusion, I LOVE THIS COMPUTER. Combined with the sale price, the Musemee pen writing capability (plus finger touch), and the available external usb hub capability, this unit has performed perfectly as my desktop replacement, and, as a portable under .8 lbs device! Great! (I am a mobile Financial Professional, and this device has been a life-saver!) .

Pros: Full windows 8.1 OS, no bloatware (except McAfee), able to power external usb drives and game controllers, very portable, great battery life, fast performance, good display, true multi tasking running metro apps and desktop windows at the same time side by side, or having multiple windows open and running next to each other.

Cons: Could use another usb port (to be able to charge while using external usb devices), screen is small so it can be tough to read sometimes (there are ways to adjust with zoom on webpages and such), windows 8.1 took some time to get used to (at first it can be frustrating to use if you haven't used it before), no hdmi or video out port, not many options out there for cases/keyboards.

Overall Review: This has been a great tablet so far. It's a little to small to be a complete laptop replacement, but it's much more portable. In my opinion, it's better than an android or ios tablet because of everything it can do that they can't (I'm still not a fan of windows 8, but it is much more versatile in what it can do vs. the phone OS's). The screen is small, so it has to be viewed closer than a laptop, but you can always use a laptop or desktop to RDP into it if you need a larger screen. It isn't the most powerful machine out there (sometimes it will lag a little when there are multiple tasks running), but it runs well for what it is. Haven't had any problems with heat or noisy fans. HDD storage is a little small on the 32GB model (had to move/delete the recovery partition for more space. 8GB free before, 11 GB free after), but being able to attach external drives, I haven't had a reason to have to store any large files on the internal hdd. Would have been nice if they had included the usb otg adapter instead of having to order it separately, but newegg has them for around $3, so not really a problem. BTW - my tablet did not come with Office Home & Student 2013 as stated in the specifications. The version included wouldn't work unless I paid for a license. Overall, I'd say this tablet is well worth the price.

Overall Review: One of the best full Windows tablets under $300 in my opinion. Nice design and quite fast. Screen is nice and sharp, This is running full Windows 8.1 not RT.