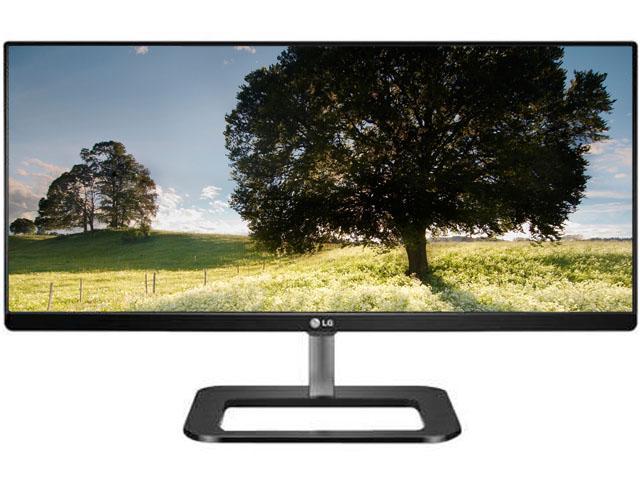 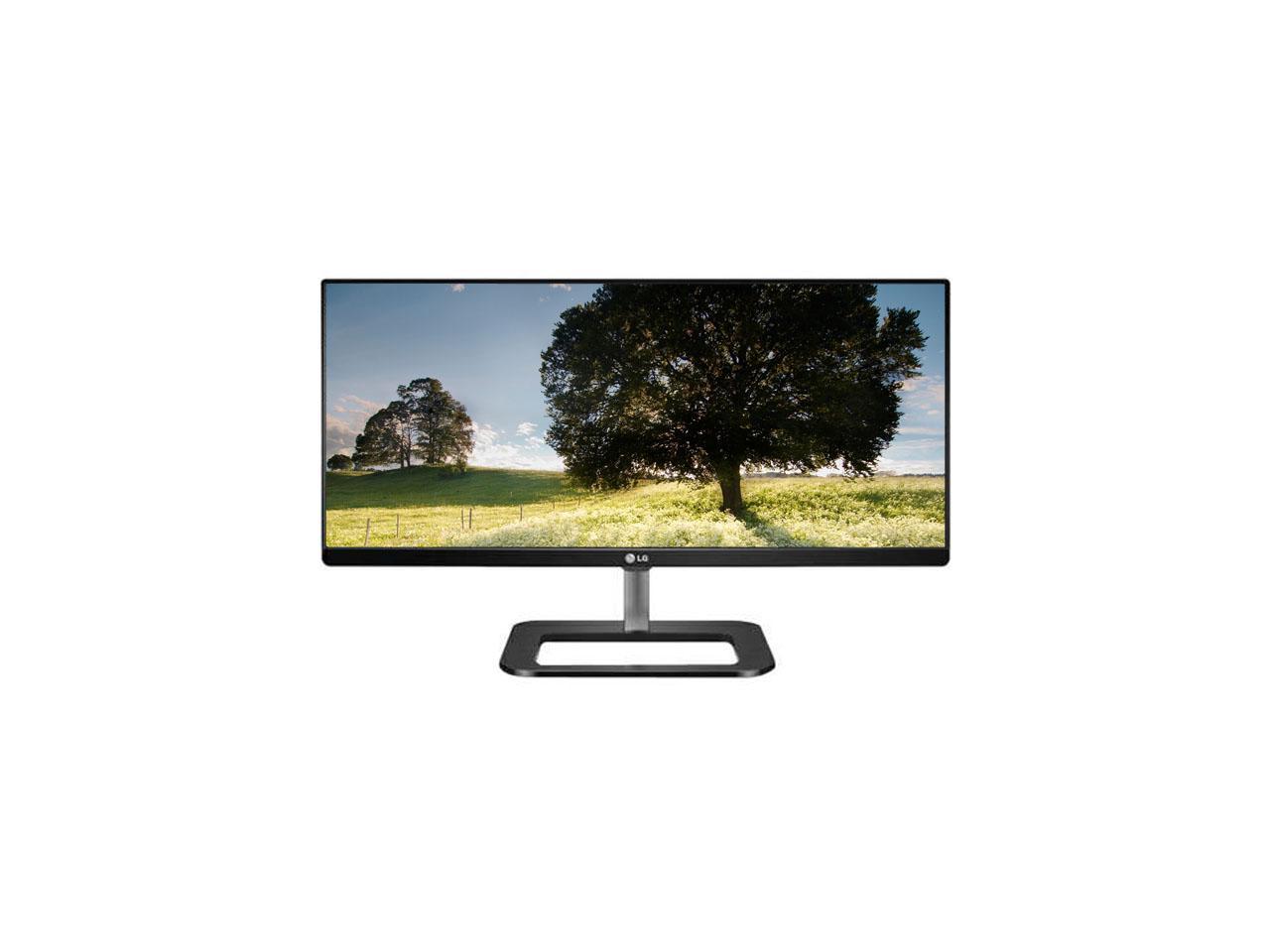 Using the right computer monitor might be the difference between a good presentation and a great presentation. LG offers dozens of innovative options to help you make the right impression, including 3D monitors that bring two-dimensional images to startling reality, IPS monitors with wide viewing angles and virtually no color shift, slim LED monitors, and ultra widescreen monitors that can be split into up to four windows for the ultimate in multitasking. Explore our full range of LG computer monitors, as well as our newest computer accessories, and create a space that's as functional as it is stylish.

Overall Review: Replace three 27 inch monitors with this monitor. The picture quality is so sharp!

Pros: Massive screen, amazing color replication. Really nice stand, feels sturdy. Bought this monitor largely for work from home, but gaming on it is very immersive. Small bezel, about 1/2" all around. OSD is nice, functions pretty easily. If anyone was looking at the pics trying to figure out where the power button is, it's directly underneath the LG logo, subdued. That's kind of nice to maintain a clean shape. Greatly enjoy this monitor.

Cons: Lowest the monitor goes down is about 13 inches tall including stand. Not a huge deal, it just barely fits in the furniture I'm using it with, but it would be nice to go down lower. Doesn't use a standard monitor power cable. It requires its own small power brick (included). These aren't enough of a complaint to dock an egg.

Overall Review: I bought this monitor when it was on crazy sale and had a coupon. Price was $350. For that price, this monitor is a steal.

Pros: This is a great ultra-wide monitor. Love it! If you do any spreadsheet work, this is the monitor for you. The stand has both height/tilt as well as rotation capability and is pretty sturdy.

Cons: Speakers are almost useless, get some external speakers and do your ears a favor. I'm not sure how useful the rotation option but hey, it's available if you want it.

Pros: The resolution is enough to run (and create) cinemascope size content. The IPS panel makes colors really pop *as it should, and accurately. Fairly light weight. Ability to use in landsape or portrait.

Cons: The lack of universal 3 prong female power connectors is a bit of a downer, especially in offices switching over.

Overall Review: My design studio uses the bigger brothers (34UC97 and 34UM95) at every workstation, as well as a few of these interspersed and let me tell you, if you are a professional of any kind, these are great. I use them with Premiere, After Effects, Maya, 3DS Max, Visual Studio, and since we switched, our productivity is up by a significant amount. I purchased one of these models for my personal use today. LG makes the best 21:9 monitors, and we've tried whats out there as far as professional monitors. That being said, for those who are simply looking for a new monitor, you'd be much better off buying a normal 1080p or 1440p 16:9 monitor, as the usage will better fit you. For professionals this, and every model we've used will blow anything else away.

Pros: HUGE Screen! Awesome quality of picture. Built in speakers are alright. I paid $300 for this monitor and for that money it doesn't get much better. Star Wars The Old Republic and World of Warcraft look awesome on this beast. And with it being very wide it helps having those extra toolbars on the side of the screen not blocking your view.

Cons: Dead Pixel right in the middle of screen, LG claims they have no stock left to give me a replacement even though its in stock everywhere else. The screen does seem like its squished a bit, its not a tall monitor just very wide. Make sure your happy with the measurements before you spend $450-$600 for one!

Overall Review: I use HDMI for this Monitor through a EVGA GeForce GTX 760 and the graphics are always set to ultra. You can turn the whole screen sideways... Idk why you would want to but you can!

Pros: This monitor looks amazing. Many people have said that the extra width does them no good, but I suspect that those people have never actually used a super widescreen monitor like this. The extra screen space rapidly became invaluable. I can have 3 documents up at once and see them all without scrolling or navigating a bezel. For example, for homework, or work I've taken home, I can have the instructions on one side, reference material on the other side, and my document in the middle. It's fantastic. The same can be said if you are the kind of person who surfs the web 3 browser windows at a time, like me. Yes, I could do this with dual 16:9 screens, and I have, and it works just fine, but this is better. For gaming it is no contest. I've used triple screens for gaming and loved it, but this no bezel experience is worth giving up a little extra total width versus triple screens to avoid the bezels in the way. Although not every game has 21:9 support, all the ones I play do, and it is practically like removing blinders from the sides of your eyes. The colors, detail, sharpness and contrast are excellent as well. It's not a pro monitor, but it performs well enough that I can do my imagery work at home when I have to, and my animation and video homework as well. For video editors and content providers, the 21:9 format is about as good as you can get, miles above a double or triple screen 16:9 or 16:10. You may want a second screen as auxilliary, for things like controls or documents, but timeline editing on the 21:9 is really the only way to fly. As far as IPS bleed, I haven't noticed anything worse than every other mid-priced IPS on the market. If you're super picky about it, then your priorities are different than most, and you should look for a different screen with less bleed. But if you're like 99.9% of the population, you'll never notice it, and if you do likely won't be disturbed by it. Due to their cost I wouldn't try to run these as dual or triple monitors, and that might be over the top even for me. If I needed more screen space than this provides I would either a) make due because I like this screen so much, or b) go triple. This screen pretty much makes double screens obsolete. What I haven't done yet, but probably will eventually, is run triple screens with the 21:9 in the middle and my two previous 16:9 on the outsides. I mean, I already own the other two, so why not? Time to save my pennies for the 3440 x 1440.

Cons: I suppose this screen costs more than it otherwise would because it is a fairly new format and not popular enough yet to benefit from economies of scale. That's a shame though, because if more people used it then more people would realize what an improvement this is over 16:9 for most things we do. Even the 25" model has an exceptional place in the market for very small screens, and yes, the 25" model looks like a small screen because although it may be 24" wide, the display is only like 10" tall.

Overall Review: I bought this as an open box sale to save a few bucks. Having experienced it now I would buy another at full price, but I'll probably wait for a sale.

Pros: 2560x1080 resolution is amazing. Although most users will probably require a displayport to use this resolution, it only costs 10 or so dollars. The movie experience is stunning. Most movies have black bars when they are watched on a TV, wide screen, or a regular monitor, but when it is on this ultra wide monitor, there will be no black bars. Truly stunning experience with the movies. Not all games will have 2560x1080 support. If the game does not support this resolution, you have two options. Play the game at 1920x1080 at stretched or 1920x1080 with the black bars in the left and right sides of the screen (in which case it will be the size of 23-24 inches monitor). The speakers are 7w!!! Two of them! Although this may not be at the same level of many TVs, assuming that you have the monitor at a much closer distance, they are more than enough. I keep my volume at 10 and it's pretty loud! When working with multiple screens, I don't like to divide into 4 screens. They get way too small/cramped. Dividing into two, left and right, seem good to me. If you are thinking of working with 4 screens, I would suggest that you go with a 34 inch at a higher resolution. 2560x1080 resolution will make them look really squeezed. Ability to change the height with ease. Got it for 275 dollars during the sale.

Cons: The package does not include the displayport. It'll take most people to use the displayport to get this to work to its full extent, even as the description says. Not including the cable is stupid. The advertising picture seems to have an extremely thin bezel. The actual monitor have about half an inch bezel when turned on. The button is quite annoying. Although the speaker volume can be changed with easy, this is the first monitor to use that I will have to hold the button for a some period of time to turn on or off. Why can't we have a simple click/touch to turn on and off?

Overall Review: People seem to have issues with the backlight bleed? Most IPS monitors will have a sort of bleed. That's the LIGHT SOURCE of the monitor. If you do not like that, do not use this monitor. While using it, there is no bleeding. While the computer is turned off with only the monitor on, then I notice a slight bleed in one of the corners.