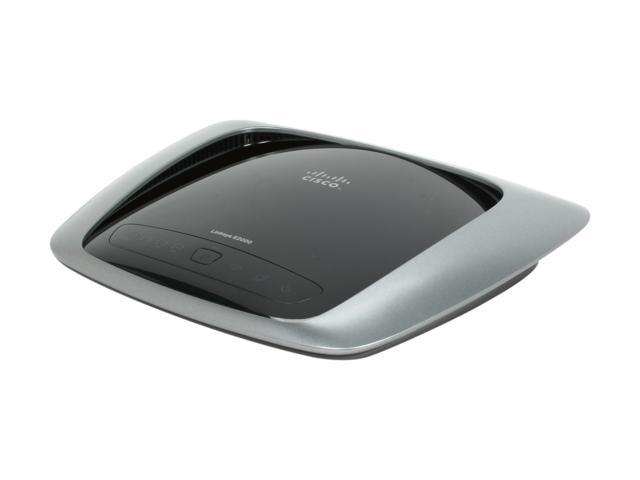 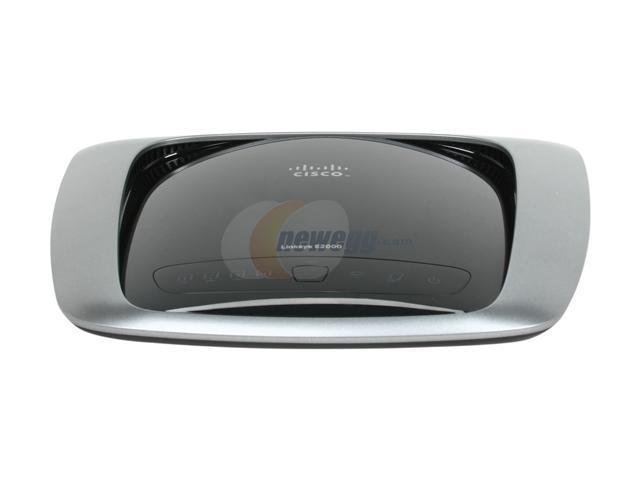 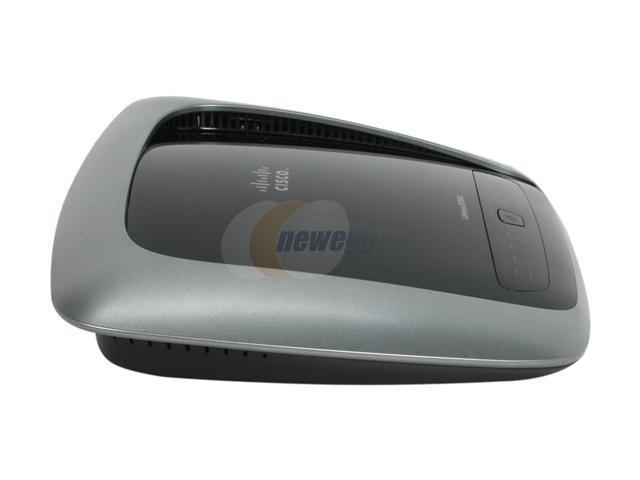 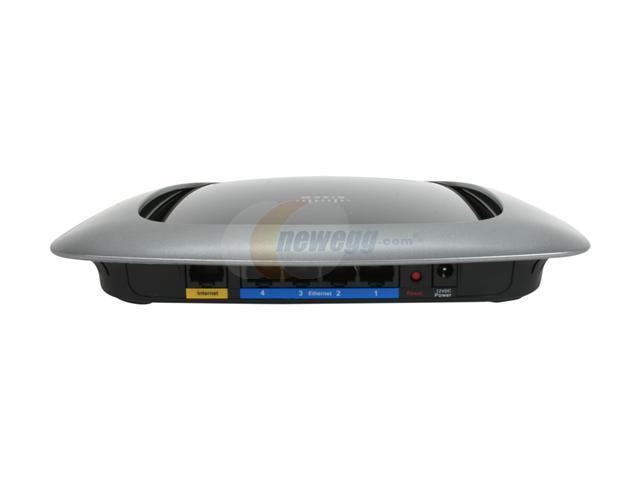 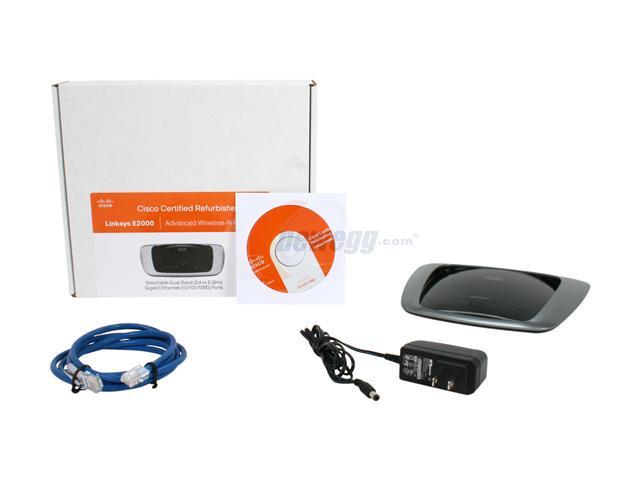 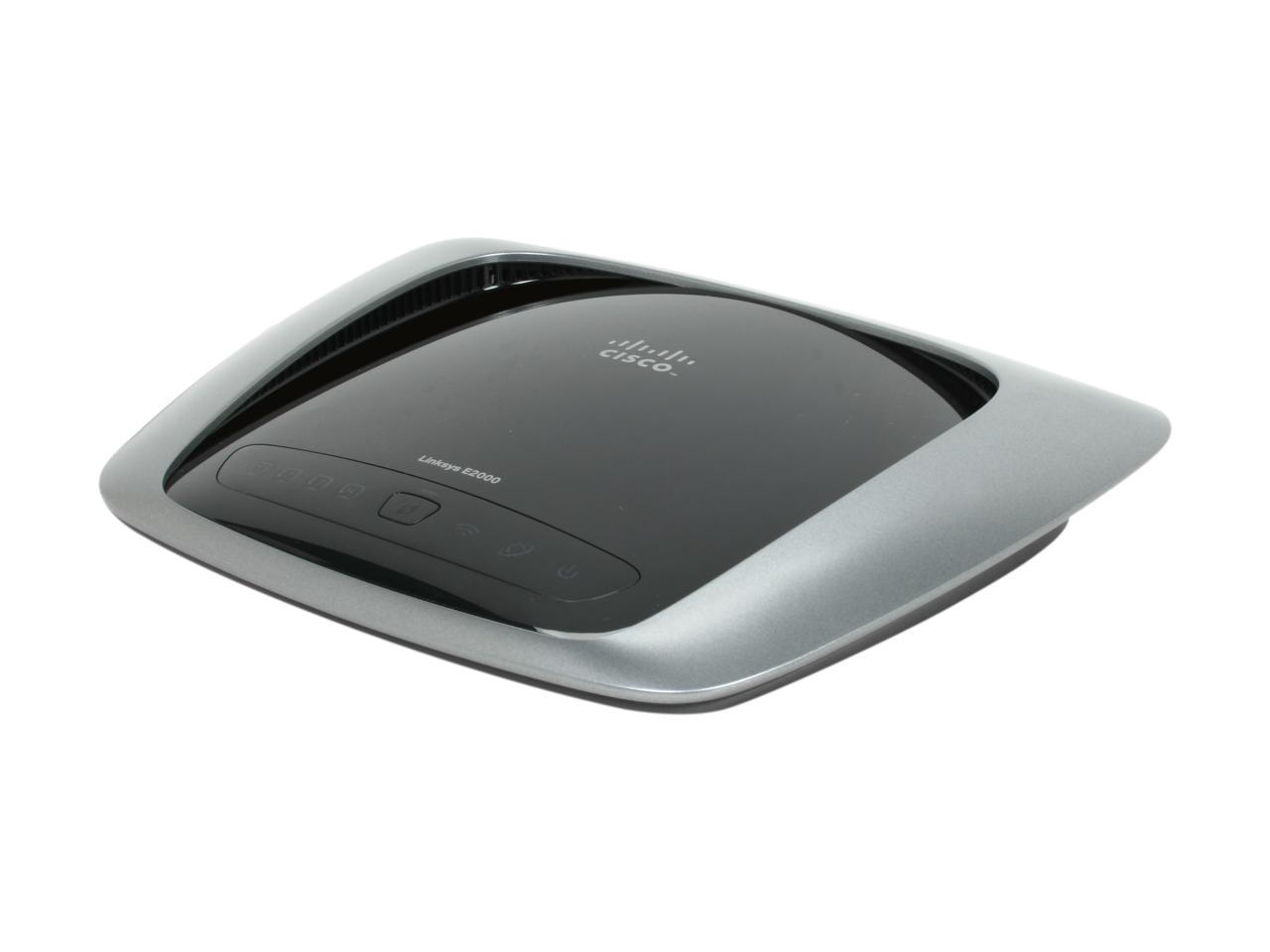 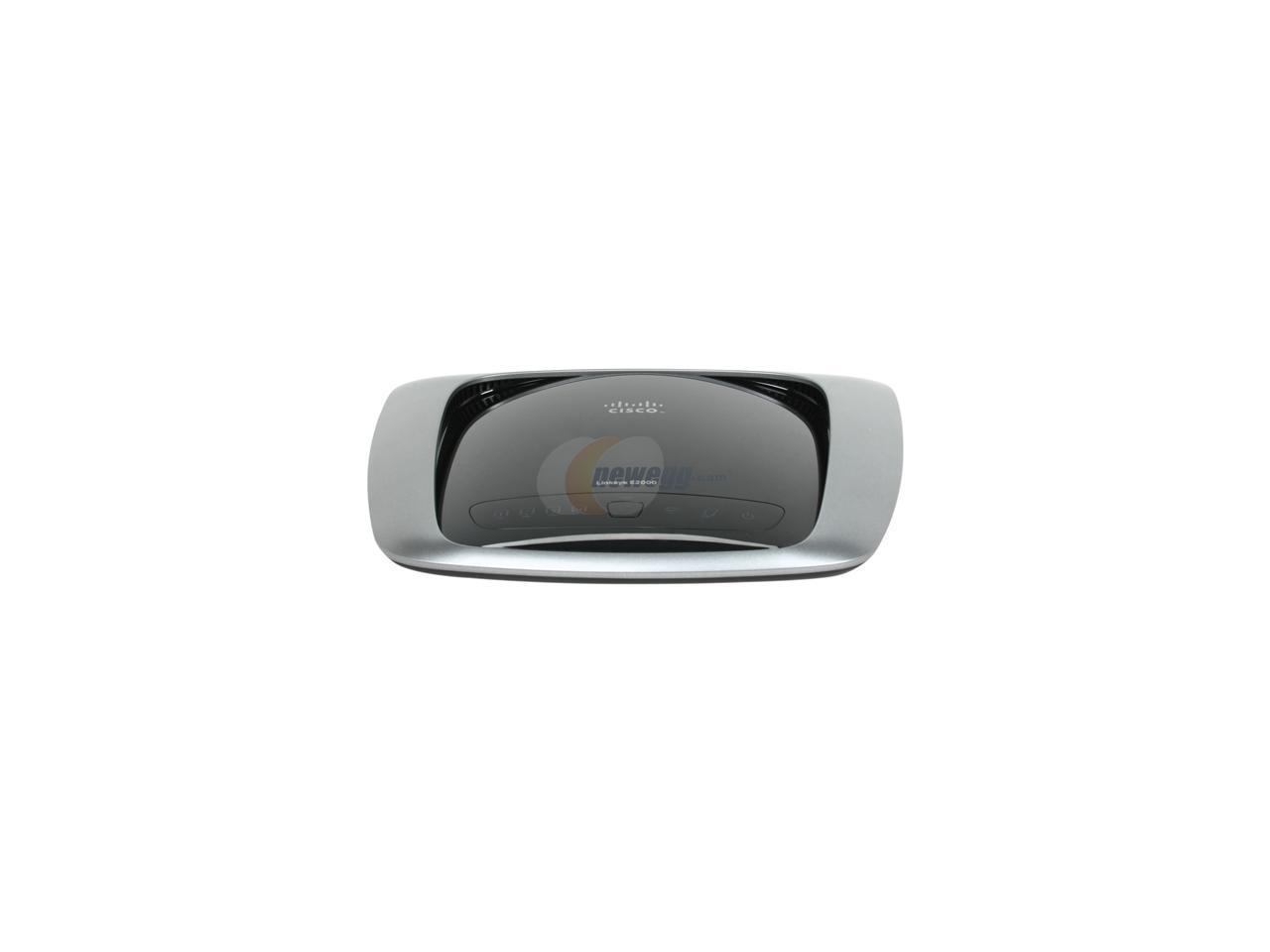 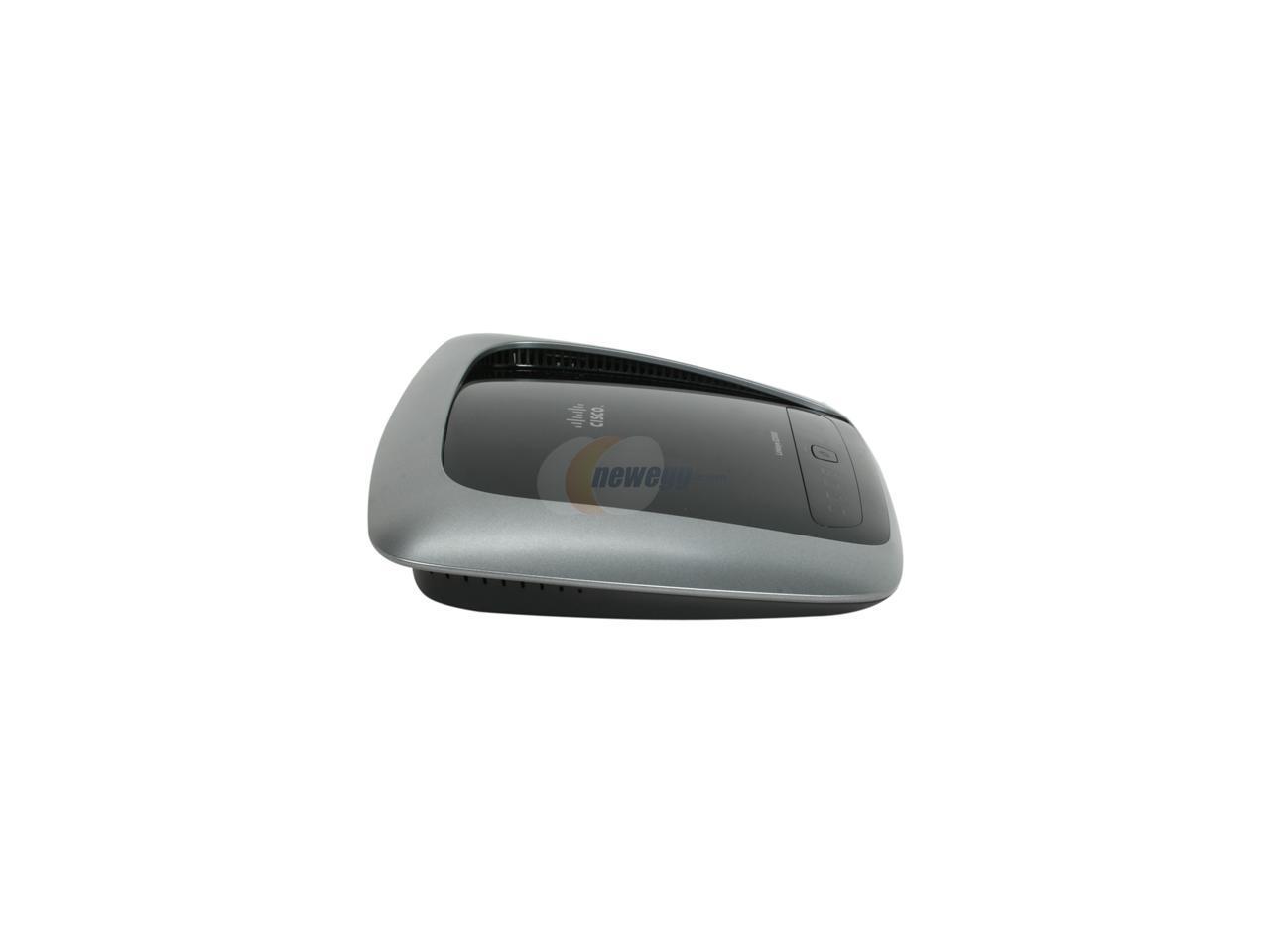 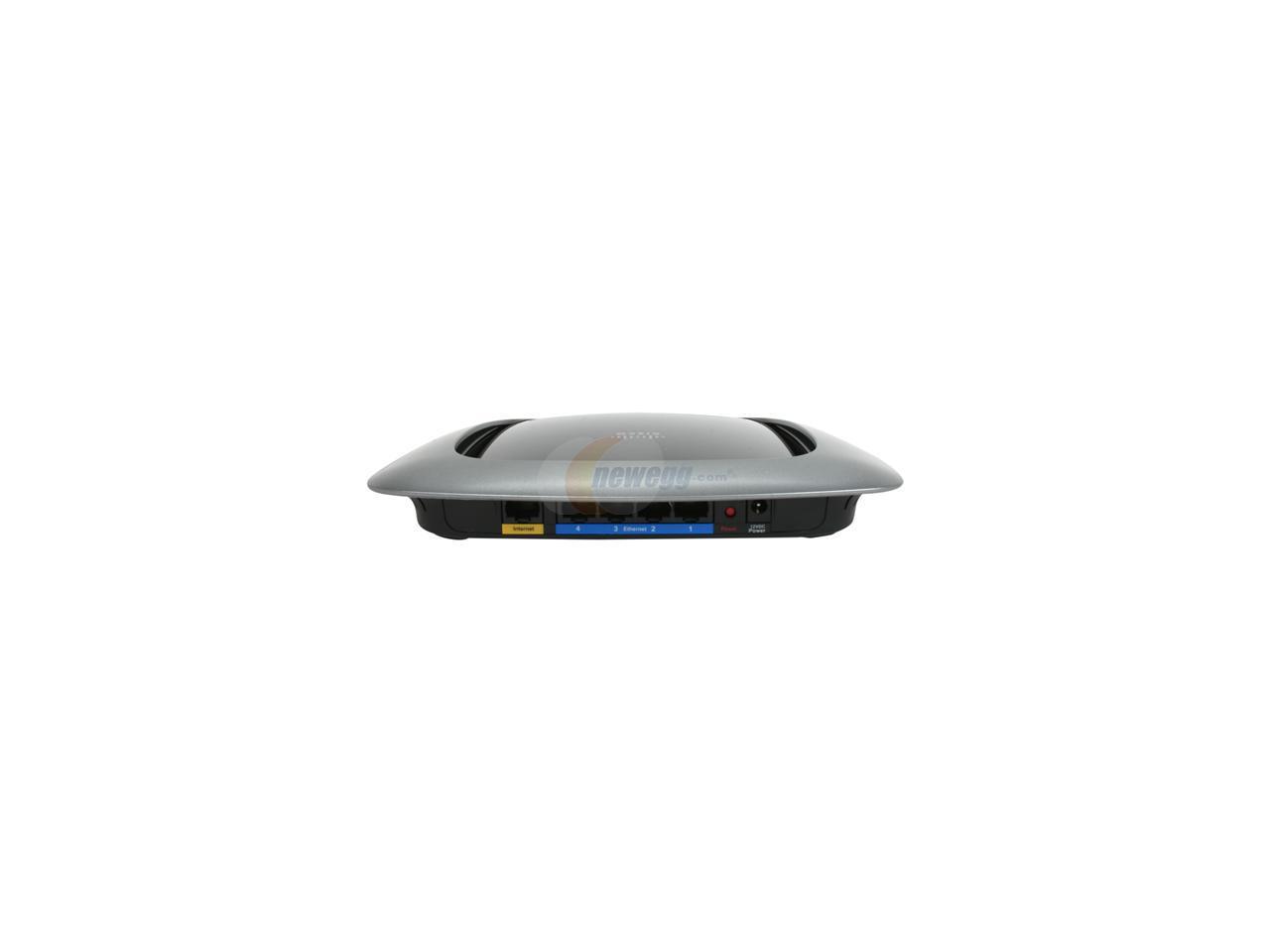 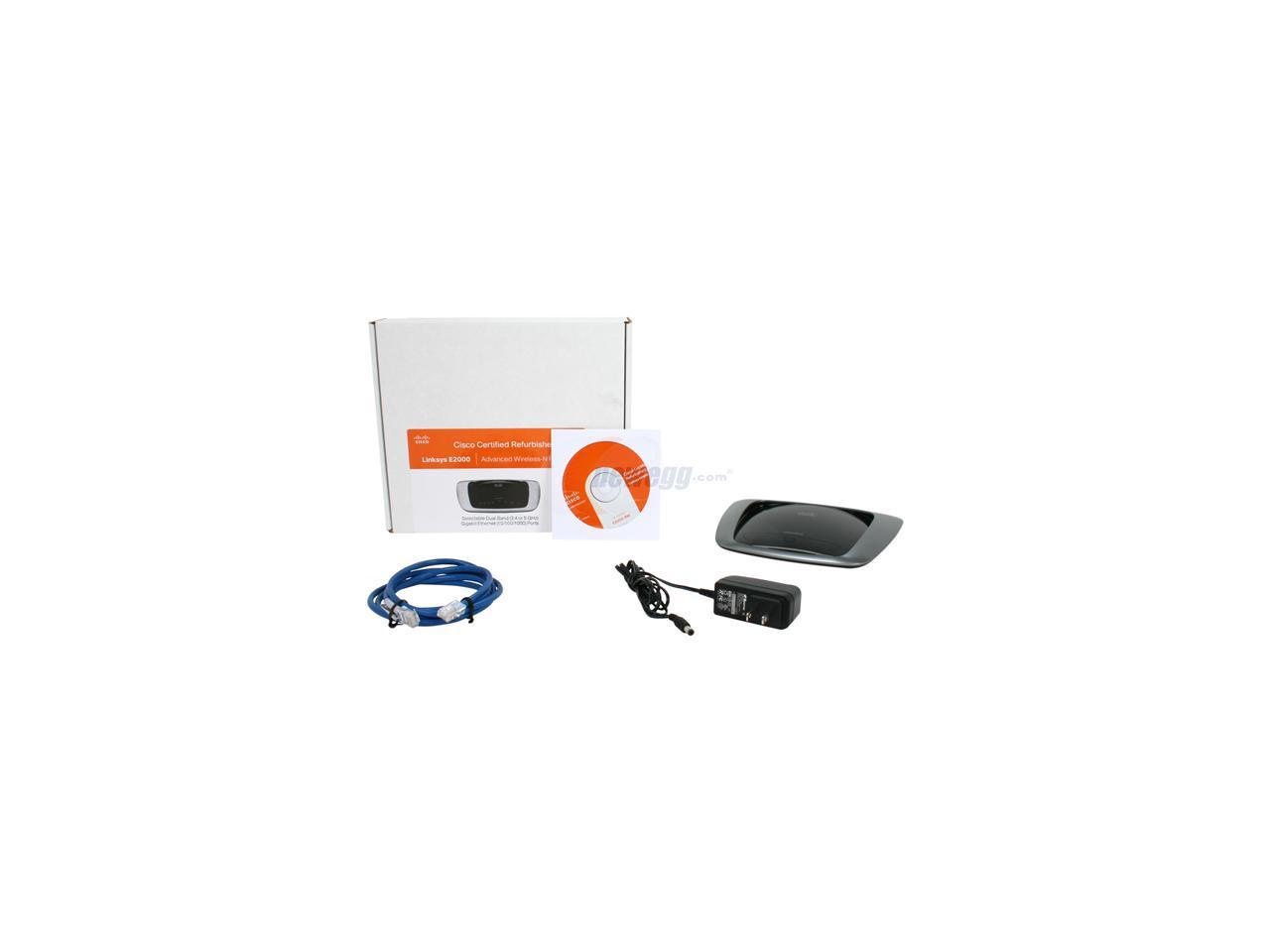 This means the product was tested and repaired as required to meet the standards of the refurbisher, which may or may not be the original manufacturer. Any exceptions to the condition of the item outside the manufacturer’s information should be provided in the listing, up to and including warranty details.
(98) Write a Review
In stock.
Ships from United States.
Most customers receive within 7-9 days.
Overview
Specs
Reviews

The Linksys E2000 offers selectable dual-band wireless-N technology and extended range to provide wireless coverage throughout your home. Cisco Connect software gets you set up in a few simple steps and offers powerful tools for managing your wireless network. Easily customize your security settings, set Parental Controls, and access advanced settings. This router is ideal for sharing your home's Internet connection with your family's other computers and devices.

Learn more about the Linksys E2000-RM

Pros: Excellent router, runs very well on DD-WRT. The pros of this router are that it flashed to DD-WRT very easily. Took me about 30 minutes.

Cons: Cisco firmware is garbage. Dont for a second think you will run comfortably with their firmware. Take it out of the box, do a 30/30/30 reset on it, and flash it with DD-WRT 14929.

Pros: Easy to flash with DD-WRT -- I've installed it to six E2000's without any problems. Follow the instructions on the DD-WRT page for the E2000 and don't try to install the most recent DD-WRT build. The older ones (like the recommended build) work fine for me. With DD-WRT, becomes a highly featured router, or access point, or client bridge, or repeater bridge. Purchased recertified (refurbished), an excellent DD-WRT value. I don't use it as my primary router, preferring a v1 WNDR3700 for that purpose. Wired ports support Gigabit. 5GHz band available (with some limitations, see below). Decent 2.4GHz performance. Looks good?

Cons: Stock firmware is weak. NOT simultaneous dual-band -- can only use 2.4GHz band OR 5GHz band, not both at the same time. 5GHz performance is mediocre. 2.4GHz performance, while decent, doesn't match today's top routers. Runs very warm (see below). No external antenna = positioning may be difficult. I find this router purchased refurbished to be the best bargain for a "utility" DD-WRT router. If you plan to run the stock firmware, and/or this will be your ONLY router, I couldn't recommend this router. I'd sooner pay the extra money and buy a more expensive, but more capable router. The range and speed in the 2.4GHz band is decent but doesn't match, say, the Netgear WNDR3700 or the new, expensive Cisco/Linksys E4200, or the top two ASUS routers. Like most 5GHz routers, 5GHz is more about trying to avoid interference from other 2.4GHz devices, and extracts a penalty in range and speed. I find the 5GHz performance of this router to be mediocre.

Overall Review: This router, purchased recertified, is a GREAT DD-WRT general purpose router, especially in a setup where you have multiple devices. Unless you live in a small house or apartment, I wouldn't buy this as your only router. I have bought six of them and ordered 2 more today. One acts as a dedicated 802.11g AP for the few "g" devices in the house, so they don't drain 11n performance. Another is an AP hanging off a Powerline adapter clear on the other side of the house where good Wi-Fi signals don't reach. Two are set up as client bridges with many wired devices plugged into them. The fifth went into the in-laws vacation house. The sixth is a spare. Thus this is a great general-purpose router when bought at a low price. BTW, all six units I've received to date look brand-new, just without the fancy box. The router does run quite warm. Make sure it can vent underneath. Two of mine sit on top of little rubber feet from the hardware store, that helps a lot.

Cons: It does 2.4 or 5Ghz, not both at the same time. This should be more clear. I would have spent the extra money on the E3000 if I had known this.

Overall Review: Installed DD-WRT almost as soon as a got it. The default cpu runs at 380Mhz, but is designed for 300Mhz. Changed the clock to 300Mhz. It runs noticeably cooler at 300 and can't see any speed difference.

Pros: This router is fantastic. I almost never give out 5 star ratings unless the product does something special or is better than expected and the E2000-RM is better than I expected. Range is great with the 2.4Ghz frequency band. The 5Ghz is just okay but I do have aluminum studs in my walls and floor so that may be a factor. The cost of this recertified router gives it the 5th star. At $58 you get an advanced dual frequency router with middle of the road throughput in the 2.4Ghz range and fantastic throughput in the 5Ghz range. Had I paid full price I'd give it 3 stars, at $58 it gets all 5 stars. Someone at Cisco actually checks the products sold as recertified! You can trust Linksys/Cisco.

Cons: This is my first Linksys router and the setup was a bit confusing. There was no documentation included... NONE! Know what you are doing or be ready to spend time researching. Wireless N was slower than I had hoped but a big improvement over the Bel*k*n wireless G router it replaced. Wired gigabit traffic moves at the same speed as it did through the D-L!*k gigabit switch I can now retire.

Overall Review: The refurbished unit was not pretty. It was scuffed and someone scratched what looks like a dog onto it. For $58 vs. $120 for new, I don't care it works!!! For the person that complained that the router is cheaper directly from Linksys, yes that is true. I could have saved $10 on this model refurbished router. However, Linksys will not accept Discover Cards. Newegg does not discriminate against my chosen method of payment. Before this really great Linksys I always had B*!k!n routers I got from the superstore that now also sells food and is mostly open 24/7.

Pros: The router took DD-WRT just fine. It looks fairly new, and all the ports work.

Cons: Had this same problem with the wrt320n. After flashing it to DD-WRT, it has trouble pulling an IP address from my ISP. I have no idea why... got it to use as an access point anyway, though.

Overall Review: It feels slightly heavier than the wrt320n, for what it's worth. I fried that old thing by turning up the power on the wireless antenas... sometimes, you just feel stupid.

Cons: Wasn't free. Had to wait for it to arrive.

Overall Review: Don't know how the stock firmware is, cause I immediately flashed it with Tomato. I use my Linksys WRT54GL (also from Newegg) to handle the G wireless. For some reason, Linksys ships these overclocked to 354 mhz. It ran pretty warm for the first few days. Broadcom specs the 4717 chip to run at 300 mhz. There's simple instructions over at the E2000 DD-WRT wiki to telnet in and lower the clock freq. After doing this, the E2000 runs as cool as a cucumber. Another thing: I have this router sitting next to my WRT54GL, and it makes the GL look like a Model T sitting next to a Lamborghini. I highly recommend this router at this price. As long as you use Tomato or DD-WRT firmware and do a few mods, you're going to have a great piece of networking hardware.

Pros: Recertified product looked new. Not a mark on the exterior of the product. Packaged like a new product within the plane Linksys Recertified Box.

Overall Review: This replaced a Netgear WNR2000 which was also an N router. Running the latest Linksys FW. My Touchpads no longer have dropouts, I gained gigbit ethernet, and did not need to DMZ or back rev my FW to get my NETTALK device to work.

Pros: Pro? How about transfer rates on 2.4GHz mixed mode of 70 to 110Mbs!!! Check out CNET's reviews of routers; looks like they know what they are doing. This little puppy is running 2 to 3 times faster than the old WNR3500v1 - I can finally reliably stream _real_ HD to my HTPC, regardless of how many of my neighbors trample on my signal. Woo-hoo!!

Cons: Con? It looks funny? Too many of my neighbors have wireless? I don't have any 5GHz adapters to try to link to?

Overall Review: I bought one locally (at vy small center); it worked fine but I took it back (long story). Then, I got so ticked at the WNR3500's performance, I got another. Two for two worked perfectly, and both were cosmetically perfect. So, I'm liking the odds w/ Linksys refurb. I don't think the Egg would get any worse assortment than the local did... I haven't tried the 5GHz, so I guess I can't be too sure there aren't any flaws. The gigabit wired links worked fine in both. With the great performance, it would make sense to buy a second just to run the 5GHz. Still be cheaper than one of the full dual band boxes! So far, I'm using the Cisco software. I don't broadcast SSID, so I turned off the Guest service as soon as I saw it used a variant for its name. WTH? Don't need it, but didn't find a place to rename it. Their hybrid setup really is kinda klutzy. Might try the DD-WRT, if only to reclock the Broadcom chip to spec and see if the Guest thing can be fixed. Oh - Good ventilation is a must