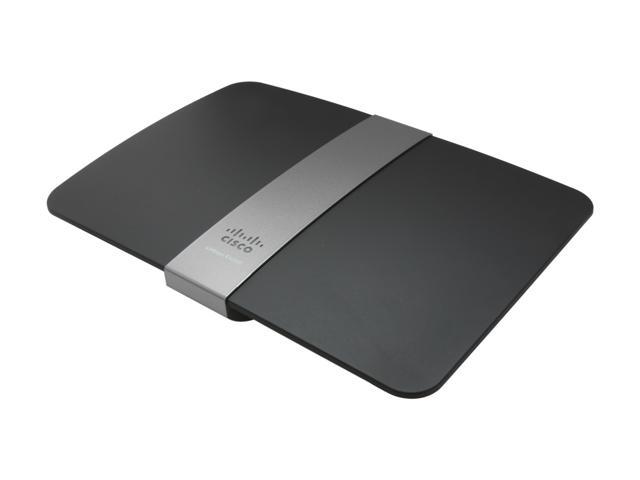 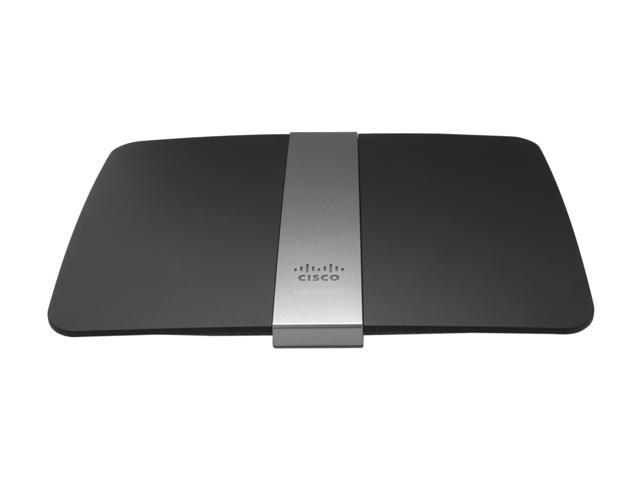 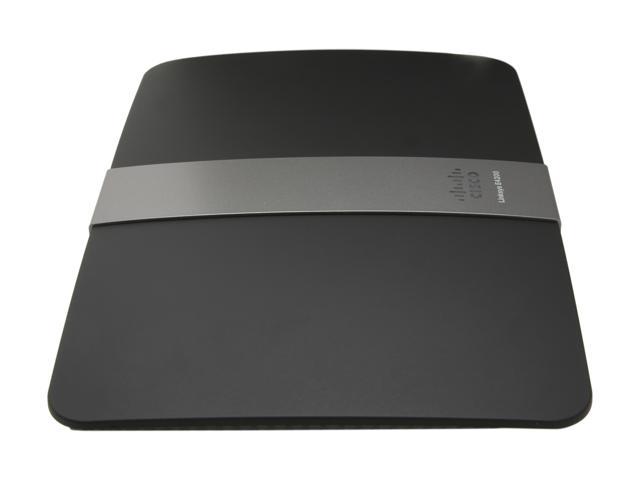 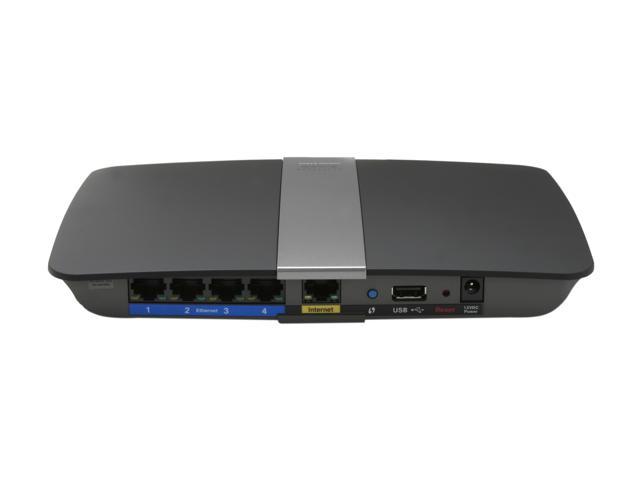 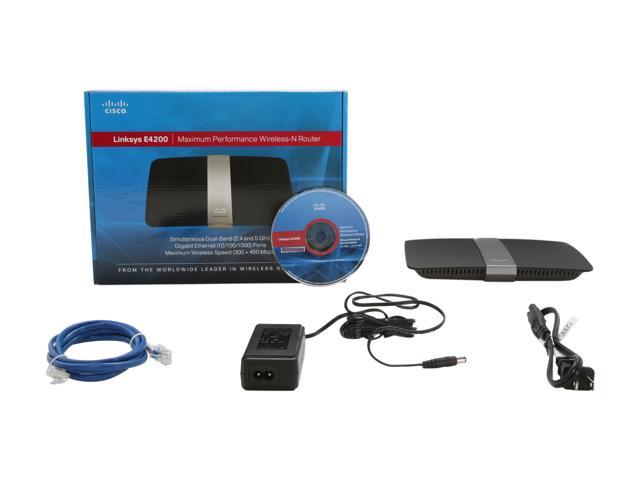 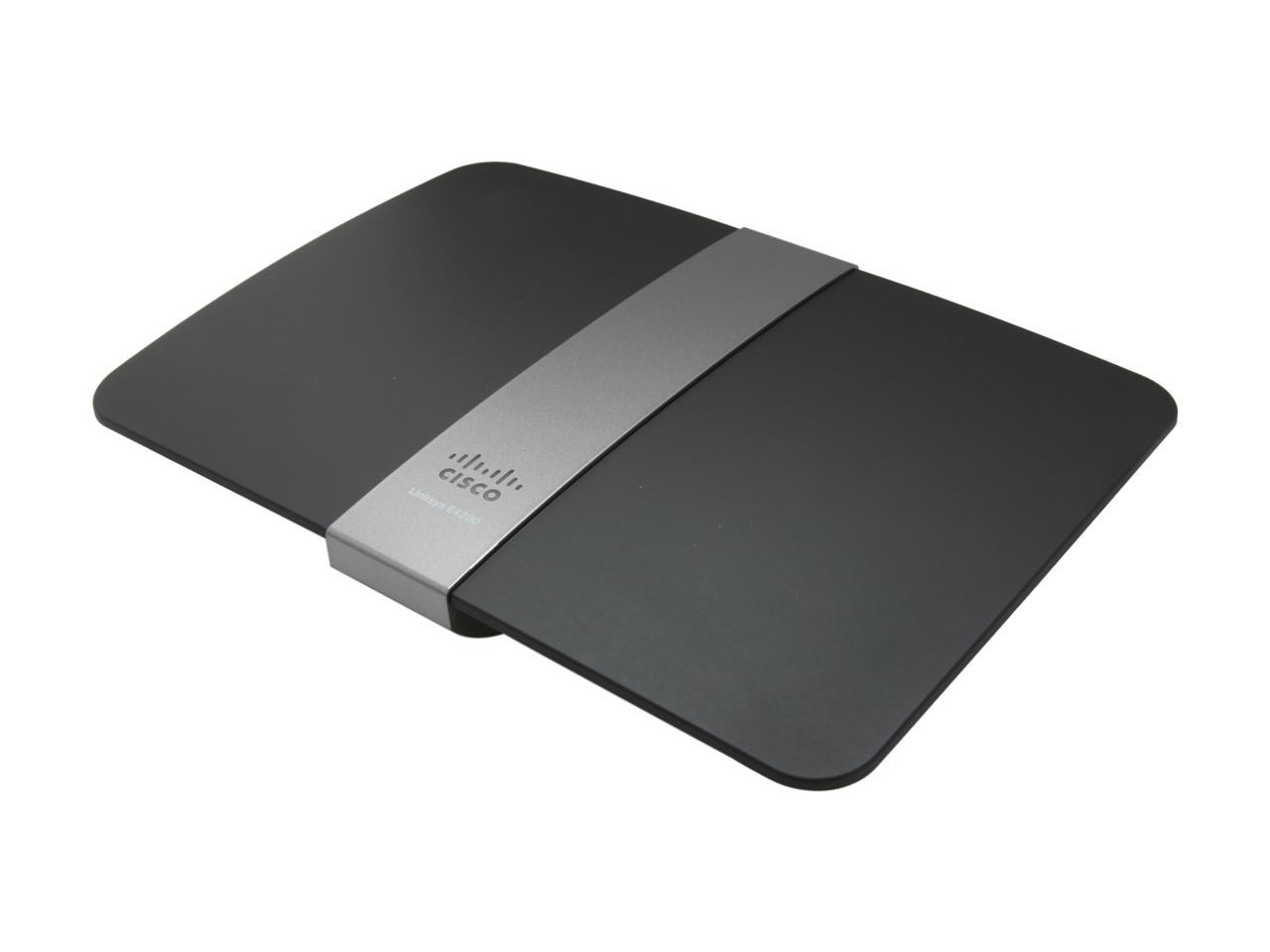 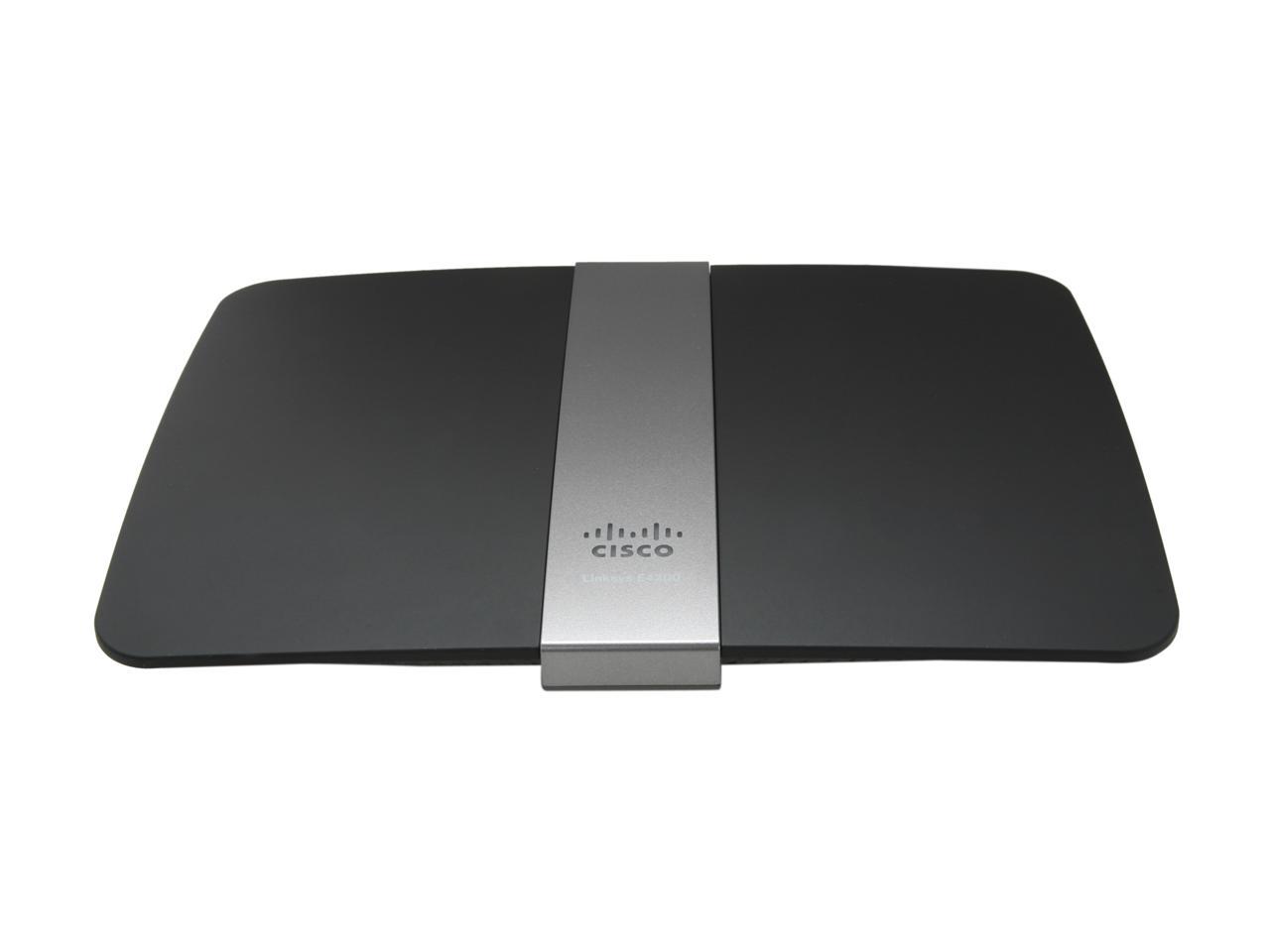 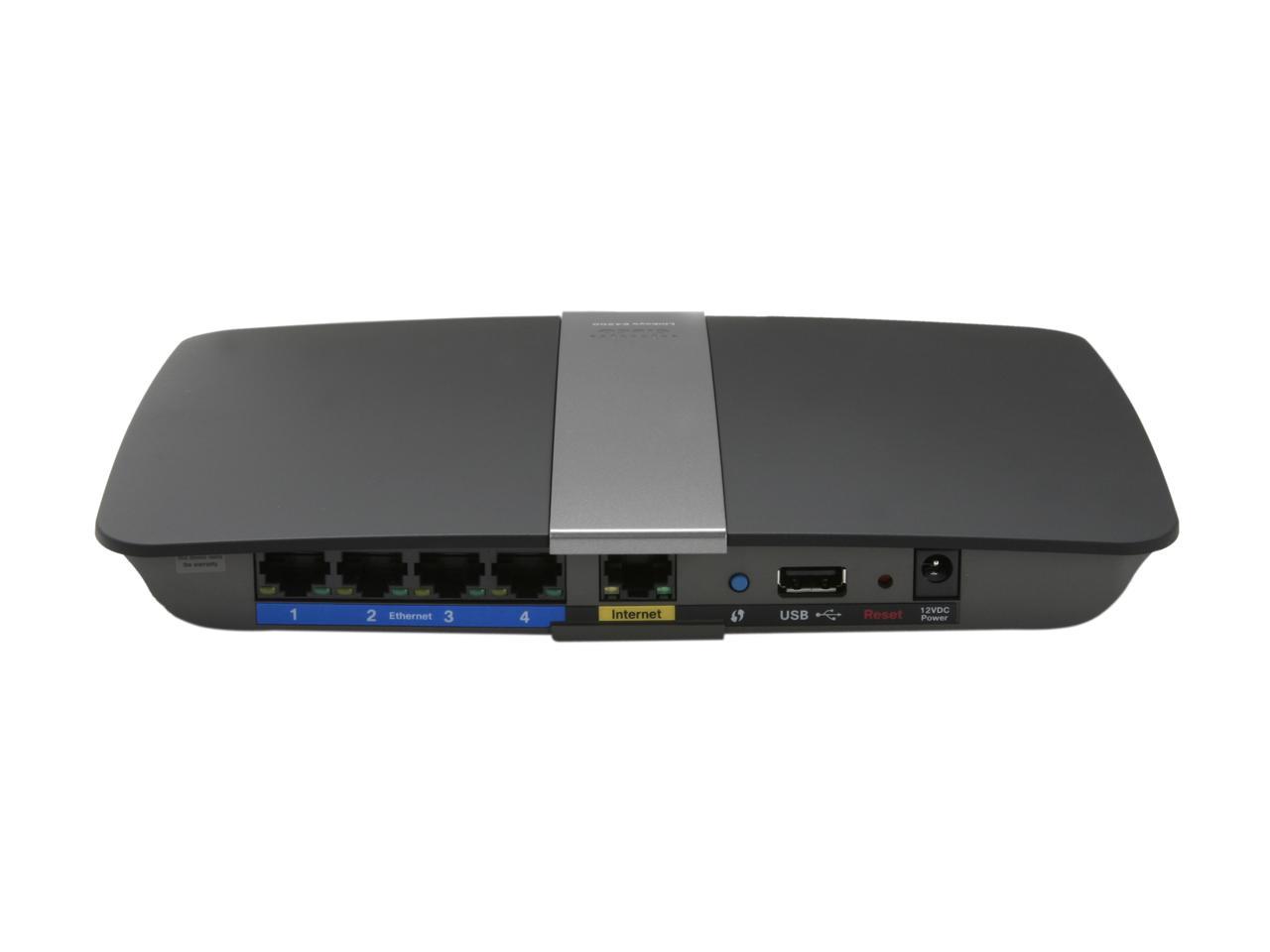 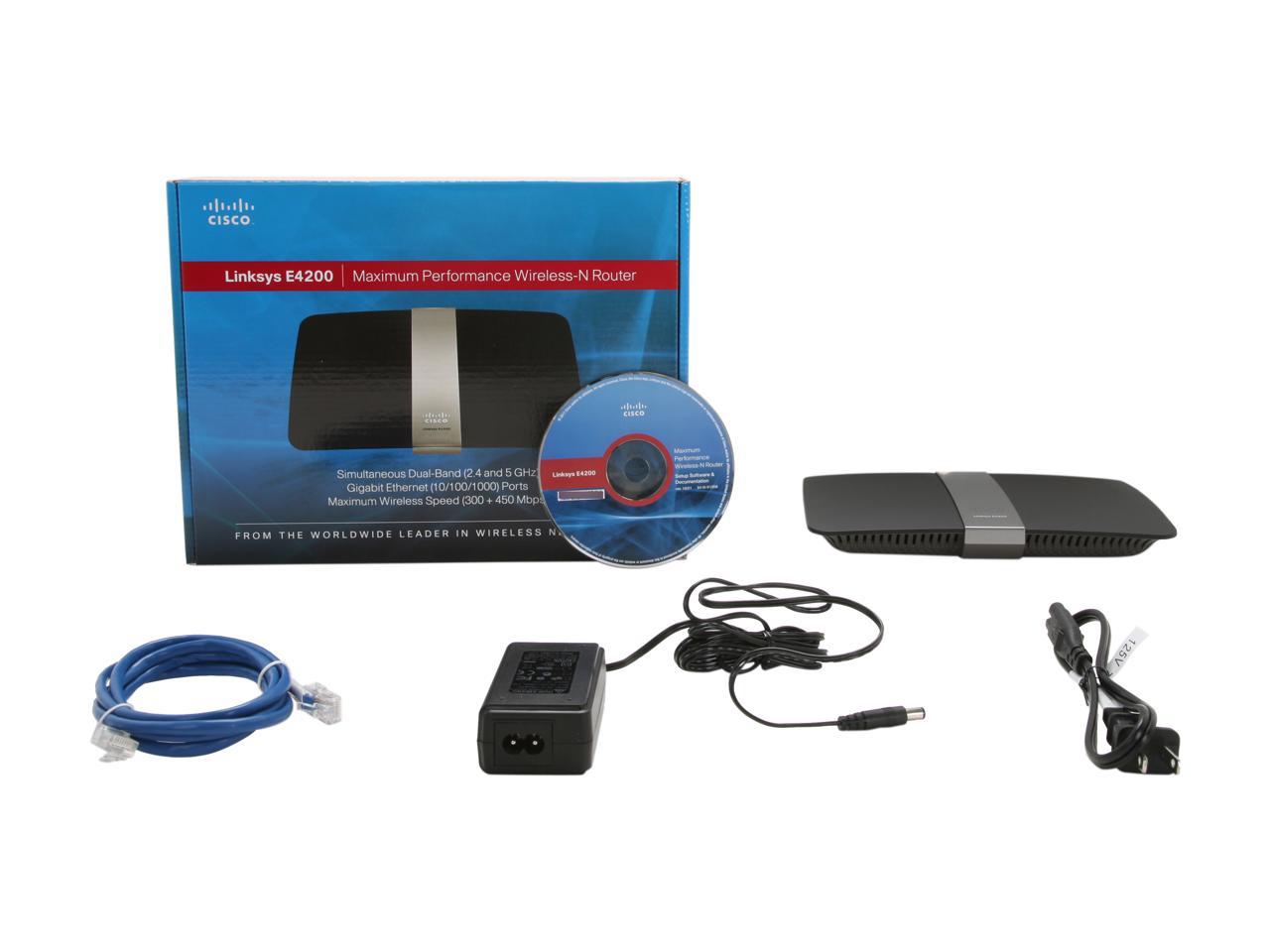 Learn more about the Linksys E4200

Pros: Great signal strength (installed in an attic and receive full bars three floors down). Simultaneous dual band has been helpful with getting signal in "hard to reach" areas. Can support 6+ wireless connections without problem. Great for streaming video and gaming.

Overall Review: Though I don't own one myself, I am a technician that installs them for other people. After installing at least 20 units and no one calling me back to complain, I am very happy with this product. If I could get broadband where I live this would be the router I would choose.

Pros: Nice looking. Can turn the back port lights off (but can't turn the glowing white Cisco light off).

Cons: Gets hot (to me) after prolonged use, so I have a side propped up on a coaster pending buying some padded feet for it. Web interface slower to load than expected. Using with my Dell XPS M1530 with Intel 4965AGN wireless card. Foot away from my router I get about 12MB/sec (about 100mbps). Only saving grace is the range appears to be excellent in my 2000 sq ft townhouse. Router is in one corner 2nd-floor bedroom, and even at the furthest point away in my basement I get about 6 MB/s (about 50 Mbps).

Overall Review: Used to stream ISO rips of my legally purchased DVDs & Blu-Rays from my home server to my TVs. DVDs require about 1 MB/s to play without hiccups, which this does fine, but the blu-rays require 5-6 MB/s which this unit can do about 90% of the time. Maybe it's just my approximately 4-year old laptop wireless that can't handle the new speeds?

Michael B.
Ownership: 1 month to 1 year

Pros: -10/100/1000 Ethernet -Dual Band 5Ghz (A & N) /2.4Ghz (B, G & N) -Guest Access - dual 3x3 MIMO antennas (really good coverage - much better than standard internal antennas - 2.4Ghz and 5Ghz each have their own 3x3 MIMO antenna) I can get Wireless-N coverage on 5Ghz for over 200 feet, before signal drops below 3 bars. Basic functions (router names, Wi-Fi names, passwords, etc) are easy to customize, and the hardware performs well when the software-side is working. I would give 5-stars, if not for poor support of advanced network functions (something that should not be the case with Cisco's flagship consumer router - with Enterprise-class hardware). Waiting for dd-rt or Tomato to work out Dual-band (or at least 5ghz) support and Wi-Fi stability. I would give even lower, if not for the incredible hardware - and the potential it brings when someone writes better firmware.

Cons: Horrible Software support and Firmware When you fist try to access the router's administration pages, you are reminded that the router's security has not been setup and are prompted to install Cisco's management utility - it's just bloatware. Most people are just going to change the passwords for the router, Wi-Fis, and some network names. No real management - which is really all that program can do in the fist place. At the same time, while with most routers in the past (WRT54G/WRT54G2), you're accessing a series of webpages stored at the router's IP address (default - 192.168.1.1), with the E4200, you're not accessing a series of web pages stored at the IP, you're accessing a software program. I'll explain more about that in "Other Comments" section I have yet to be able to set up this router as a secondary router (Router B) in a cascade arrangement (think almost like a sub-network), even following Cisco's own instructions and my own knowledge.

Overall Review: The Software-based management is an interesting concept, but it is poorly executed. I know it's software-based because anytime you make a change to something important (IP Address, NAT enable/disable, etc.), you need to reboot the router. For one, changing the router's IP is a pain - something that should be painless and take seconds, takes minutes and reboot (when it even works in the first place - sometimes, the changes don't take during a reboot and you end up locked out of the router until you do a full reset). In theory, to set up the router for a Cascade involves changing the IP, disabling DHCP server capabilities, and disabling NAT (disabling DHCP and NAT gives the main router management control over the entire network). When I do this, I can get the wired networking, but the wireless no longer works (at least as it's own network, I haven't tried tying the two router's Wi-Fis together) and I can no longer access the admin pages of the E4200. Things that should be simple, aren

Pros: Actual speeds (measured with Jperf) I'm getting are 44 Mb/s using 2.4 Ghz and 85 Mb/s using 5 Ghz. This is compared to 15 Mb/s I was getting with my old Linksys G router. The more impressive thing, though, is that while get 85 Mb/s directly next to my router (in the basement), if I go two floors up to the bedroom I still get 75 Mb/s. This has enabled me to view live TV wirelessly using an HDHomeRun network tuner. Previously, it was unwatchable.

Cons: The advertised speeds (300Mbps/400/bazillion/etc.) are rubbish, as they are from all manufacturers.

Overall Review: Gigabit wired ethernet is nothing to sneeze at, either.

Pros: Highly configurable. Doesn't lock up. No antennae sticking out of the back and yet has better range than any router I tried that did.

Cons: The interface is barely changed from the 10-year old workhorse, the WRT-54G. It's a little low-tech. At the end of the day I guess it's not a big deal.

Overall Review: I have been using a D-Link Gamerlounge 4300 for like 6 years now. Fond memories even if I did have to reboot it once or twice a week. I decided to upgrade to Wireless N, so I tried the D-Link 4500... it locked up daily. I tried that Edimax junk that has the "best rating" on Newegg but it locked up HOURLY. This little powerhouse is the first one I haven't had to babysit. If I have to pay 3 figures for the pleasure then so be it.

Pros: The E4200 is capable of dual band operation at both 2.4GHz and 5GHz with 3X3:3 (meaning 3 transmit and 3 receive antennas plus 3 spatial streams). So, with an adapter that also has 3 antennas (such as an Intel 6300) you can achieve 450Mbs if connected at 5GHz and the unit is set to 40MHz channels. Note that the range 5GHz is not going to be as far as 2.4GHz and stuctures such as walls will certainly lead to loss. Wi-Fi geeks already know all this so I'm explaining this for those who don't. The guest wireless feature may be of interest to some. It's 2.4GHz only without encryption and relies on a captive portal in which guests type a password.

Overall Review: I recommend visiting Cisco's Linksys website for the latest firmware and software. I haven't used the USB feature so can't speak to that. It would be nice if Cisco provided more info on the antennas in the device and info like azimuth and elevation patterns. The software to configure the device is probably good for novice users. For anyone else I'd recommend manual configuration.

Pros: - Excellent wireless signal stability (no wireless disconnects, great pingtest.net results, even over a wireless connection). If you have any problems, just disable any optional third part wireless adapter network utility. - Proven class-leading wireless performance in a review by a site that specializes in reviewing networking gear. - IPv6 support. - Great looks and also smaller than it may seem to some based on the pictures.

Cons: Media server broken in latest firmware - 1.0.02 (Just downgrade to firmware version 1.0.01 to get it working until 1.0.03 comes out, albeit without IPv6 support). I don't use the media server luckily. - Tech support is unaware of the "flashing logo light" syndrome (luckily this is purely a cosmetic since the router works flawlessly) and Linksys has not acknowledged this quirk in their FAQ etc.

Overall Review: At least two reviewers lowered the overall rating to just 1 star mostly / solely because the current firmware broke the media server. This is unfair since they even noted how well it works otherwise. Linksys is beta testing a new firmware as we speak to fix (bring back) the media server functionality. They should have tested the current firmware better before releasing it and should have pulled it by now, but to give the router 1 star for something (media server) other than its primary purpose (routing) is unfair at best. I understand people are upset at Linksys but this is not the right way to go about it.

Cons: The setup CD works perfectly. Extremely easy to get operational in a very short time. HOWEVER, the software gives the router's wireless password and the router's Admin password the SAME password value. Thus, everyone that has wireless access has admin access to your router when using the web interface. You can change either password via the web interface and your security is then OK. BUT...... if you try to use the Cisco Connect software again (which was installed automatically on your PC), it will complain and force you to change the passwords back to the same value. This "feature/bug" was verified by Cisco Support. Therefore, the Cisco Connect software is really of no value once you have performed the initial install. No need to leave it installed on you PC.