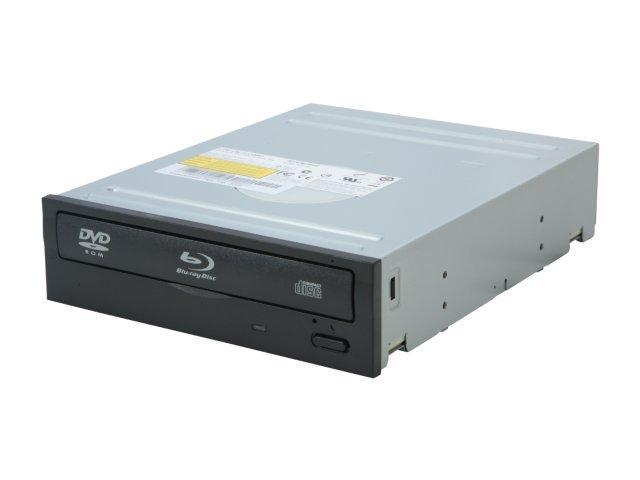 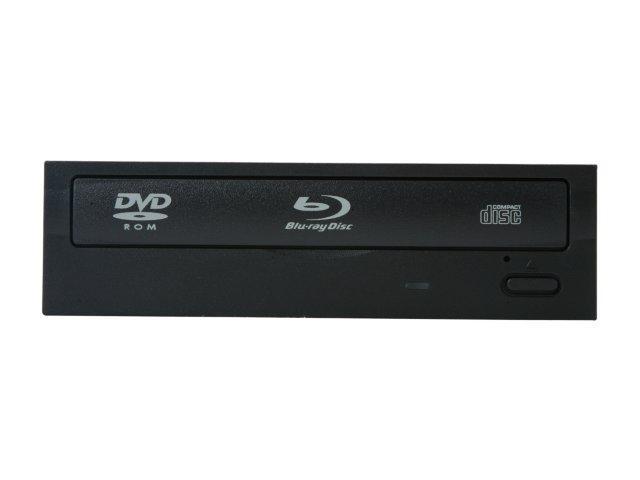 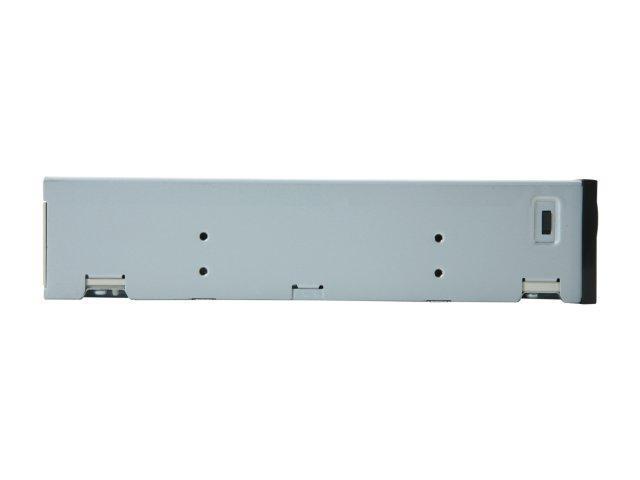 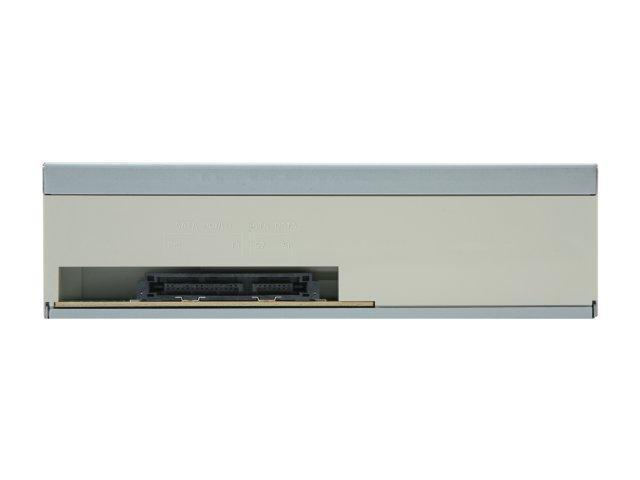 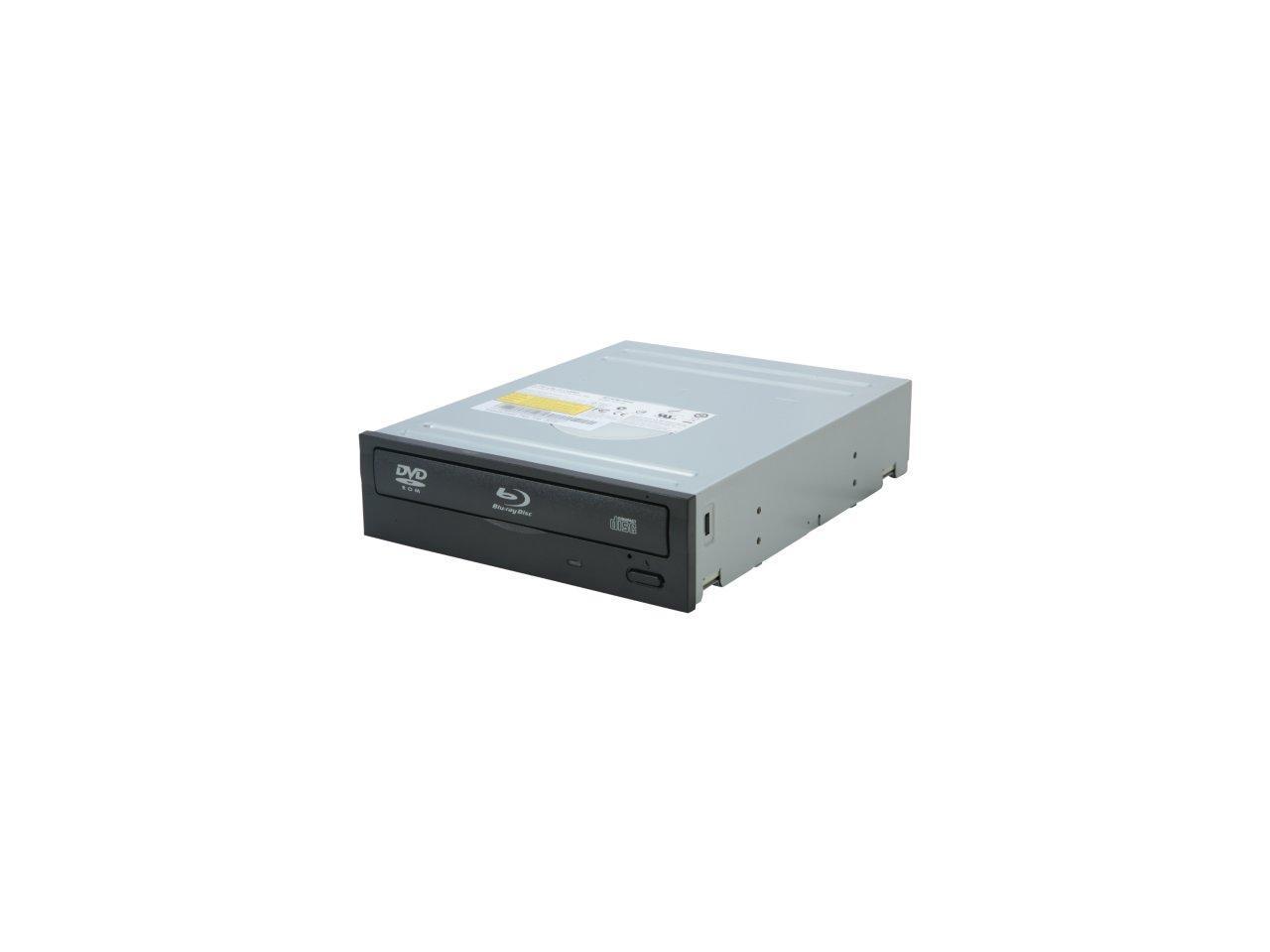 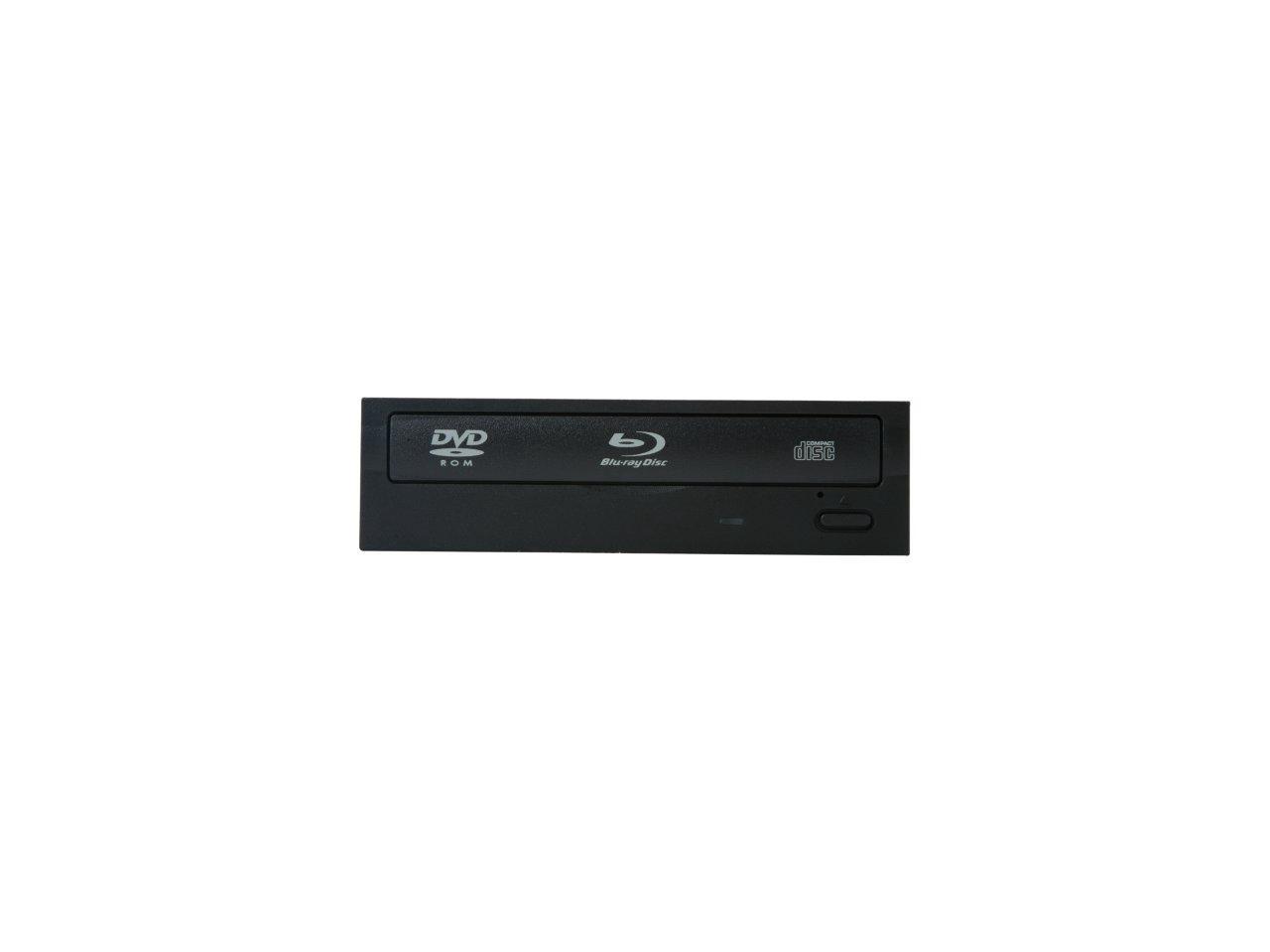 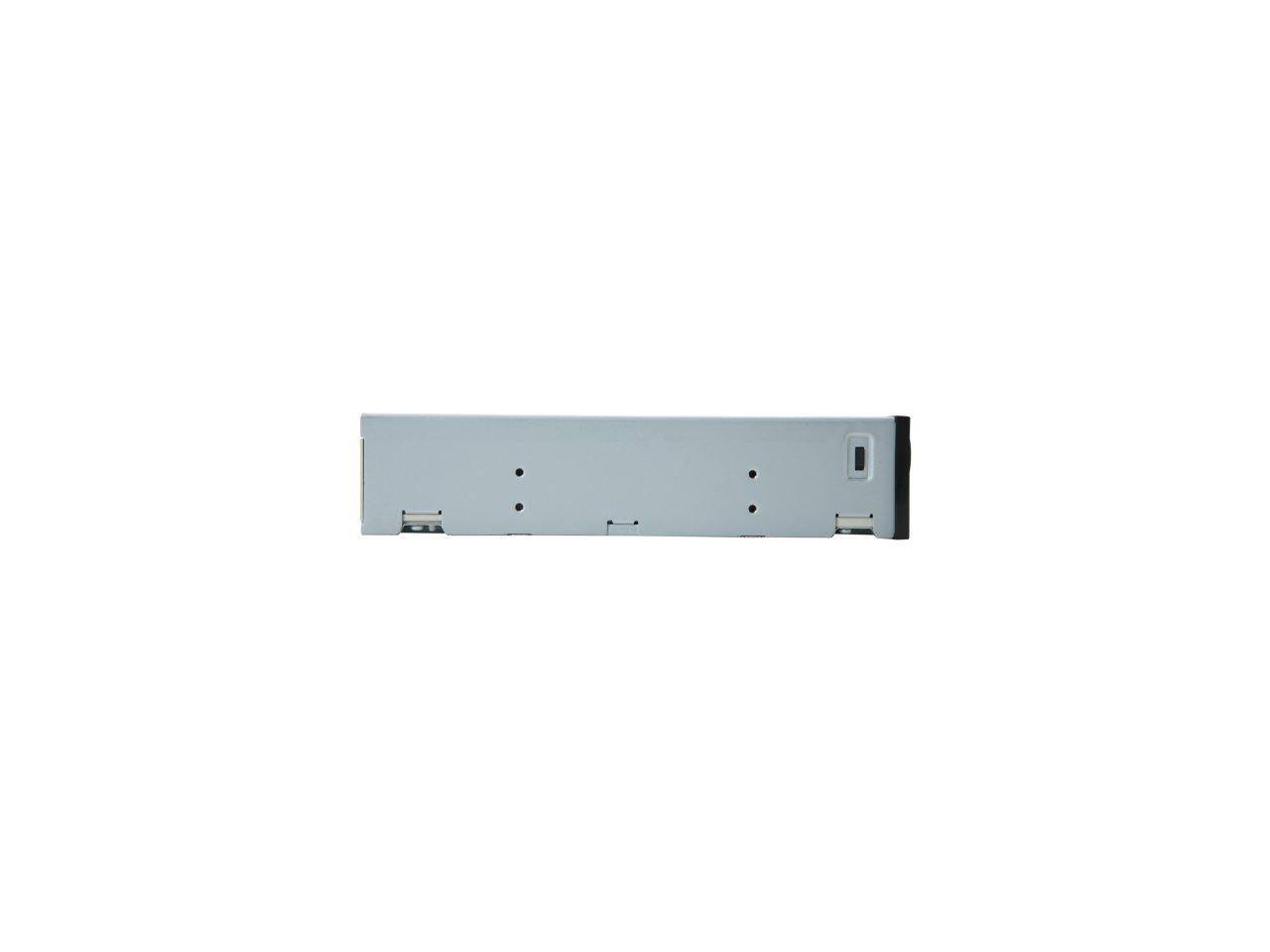 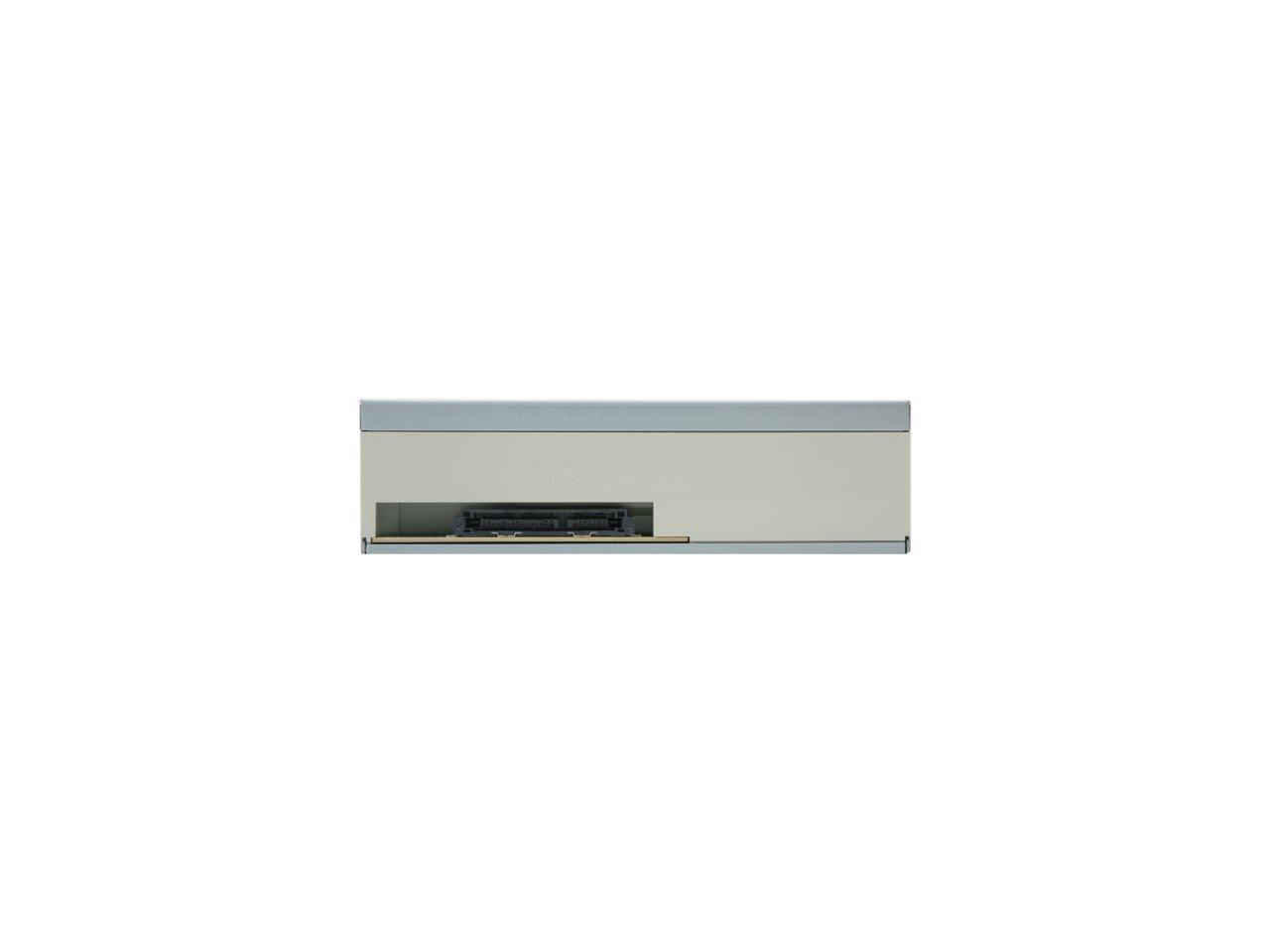 (374) Write a Review
OUT OF STOCK.
Specs
Reviews

Pros: Inexpensive SATA Blu-ray drive. Handles Blu-ray, DVD and CDs. Other thoughts: Ran out of room, so I'll start Other thoughts here... If you plan to use this for playing Blu-ray movies, I can tell you it does work, but there are some things to consider. You can play Blu-ray movies without a "Blu-ray media player." What the Blu-ray media player provides is the menu system for navigating the content easier. HDCP - High Definition Content Protection Need it both on video card and monitor in the form of HDMI (HDCP is implied) or HDCP over DVI (only found on newer models of video cards and monitors, so you should look for this). Cheap alternative is to use analog PC video (VGA) connection, which gets you around from having to buy new equipment. An easy thing to do if you have one of the newer video cards with 2 DVI or DVI and analog video out with a monitor with DVI and analog in ports. Hook up both DVI and analog cables and set monitors for dual display mode. Contin

Cons: It's been reported that firmware W06 (latest firmware and only firmware I'm aware of) has a bug where CSS does not descramble content, which maybe causing the following problem... The free PowerDVD 8.0 BD (Blu-ray Disc) Edition that came with the drive didn't work with Blu-ray discs. I get error 80040154 after selecting Blu-ray region but region is never set and indicates 0 changes left, even though the region has never been set before, much less changed. I googled the problem and found the media player (PowerDVD in this case) is suppose to handle region changes. PowerDVD doesn't have any problems setting DVD region and play DVDs. No good for Blu-ray, though. I haven't tried PowerDVD 9.0, but someone reported getting the same error 80040154 on it and PowerDVD 8.0 BD edition in Cyberlinks forum. Error message in Device Manager: Windows did not start a related device driver. To learn more, click the Driver tab and then click Driver Details. But it still works fine.

Overall Review: ... Move the Blu-ray player to analog screen to watch movies to get around not having HDCP on the video card and/or monitor. Use the analog/digital switch button to toggle between the two. PowerDVD didn't work for me, but WinDVD Pro 2010 plays Blu-ray. It's a little buggy and crashes on occasions and the mouse pointer doesn't correspond to menu items. You'll have to use keyboard arrow keys to navigate menu sometimes. Mouse movement causes Blu-ray menus to pop up even though the cursor is not directly over the WinDVD window. You can play Blu-ray movies without a Blu-ray player software. You need Blu-ray ripper to copy the contents and remove the content protection or use something like AnyDVD HD which removes content protection on the fly so you can directly read the files off the disc. You need a H.264 codec (ex: google Vista Codec Pack or K-Lite x64 for 64-bit Windows.) You can use Window Media Player 11 to watch Blu-ray movies after they've been decrypted. Out of room.

Pros: This drive is great for an HTPC build. Drive reads single and dual layer blu ray discs faster than my stand alone 2nd gen blu ray player. Both reads are at 4X. Very quiet and does come with Power DVD 8 software even though it's OEM. Thanks to the previous reviews on the software heads up! You can't find a cheaper BD ROM.

Cons: It doesn't burn CD or DVD but it's not supposed to for the price (and clearly states so). Power DVD8 doesn't work well with Media Center and is only 2ch audio. You must upgrade to PowerDVD 9 Ultra to get Surround Sound but it also integrates with media center. You are only as good as the software so spend your money there, not the drive.

Overall Review: Works fine with BD-Live and other extras content. Make sure that you have a good PC and a great video card before you invest in a blu ray drive. You only need a 1X ROM to play and FF/RW movies. Don't buy this if you want to rip blu ray or DVD. It will be too slow. No firmware upgrade yet but doesn't need it. Worked with Windows 7 right out of the box. Plug and play. You will need to download some hacks to get the software to play nice with media center. Just pay the extra money and upgrade to PowerDVD9 Ultra. Also, read some other LiteOn blu ray drive reviews on newegg. Sounds like there is an issue with drives that quit reading after about 3 months. I hope they fixed that problem with this model as they don't even support those previous models on their site anymore. Something to look out for. As for mine, after a month it's still working just fine. If it goes out, at least I didn't pay too much for it!

Cons: takes anywhere from 30 seconds to a minute to start playing movies after you hit the play button

Overall Review: i bought this for a htpc, plays movies great i can't see spending 200-250 dollars on a blu-ray player this thing does it all... besides the slow startups it a great product can't beat $70

Pros: Works out of the box, has played EVERY disk I've trown in it. Quiet drive with access time for a BD. Bought this for a HTPC....and it works great.

Overall Review: It amazes me the folks that deduct a star or trash the drive because it does not come with software or cables. It is OEM...which means no software...no cable. Except for the cable EVERYTHING you need to get it play movies on XP, VISTA or WIN 7...is available FREE on the net. You'll need codecs and a player...again, FREE. I would suggest people do a little research on the subject before they say it "will not work".

Pros: Cheap, does the job it should. Did I mention it was cheap? Purchased as an upgrade for a HTPC.

Cons: Finding software that will play Blu-ray in 1080p is a nightmare. That was my biggest issue with this. I ended up using Power DVD DX (which comes with Dell machines). When I installed this drive a upgrade for the program became available which lets me play in 1080p. There is a plug-in for Media Center which fully integrates the program.

Pros: I purchased the drive in October 0f 2010. It operated until January 2011. The drive was inexpensive. The drive was compatible with my system. The drive claimed to carry a warranty.

Overall Review: I gave it one egg because it was inexpensive and operated until it broke. I subtracted four eggs, though, because while I can understand that often products break -- even my OCZ SSD with no moving parts broke a few moths into my use of it -- there is no excuse for poor support. By poor support I mean it's been days since I submitted a request and I have yet to hear from the company -- not a word. So while I could excuse a broken product -- especially, perhaps, a cheap one -- I cannot excuse unresponsive, uncommunicative, and totally unhelpful support. Don't waste your time here: pony up the five bucks and buy the better drive. You'll be glad you didn't lose the time to inferior (nonexistent) support.

Pros: It reads Blu-Ray discs. It does exactly what it is designed to do.

Cons: The software, PowerDVD, is really terrible, but that has nothing to do with the quality of the drive.

Overall Review: The only reason it doesn't have five stars is because a lot of eggs were lost by other reviewers who didn't like the software. It's not the drive's fault, it's the MPAA and Sony's for making Blu-Ray discs nearly impossible to play. You'd think a Blu-Ray drive would be able to play Blu-Ray movies out-of-the-box, but sadly, Blu-Rays are designed to be difficult to play and it makes the drives look bad.

Pros: This is a great Blu-Ray player, which is what I bought it for. The burners are just too pricey. The drive works exactly as advertised. I haven't found a disc that it won't read/play.

Cons: I wish I had realized that this drive is a read-only drive. I thought it would burn CDs and DVDs, but it doesn't. I guess I should read the specs closed before buying! LOL