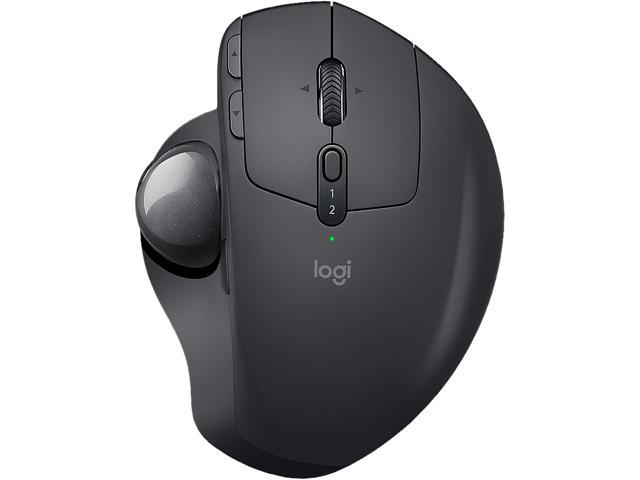 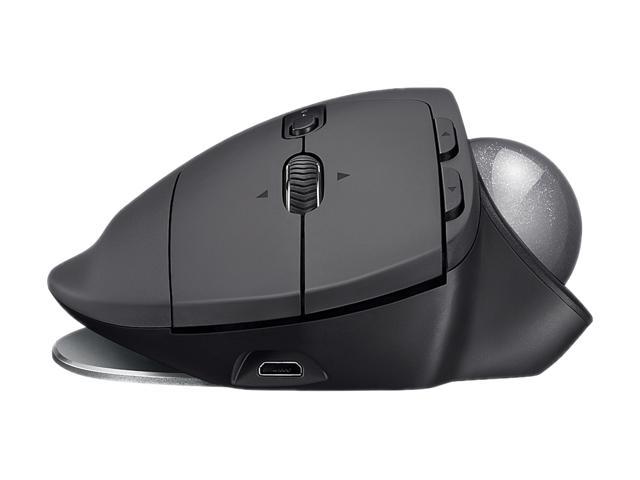 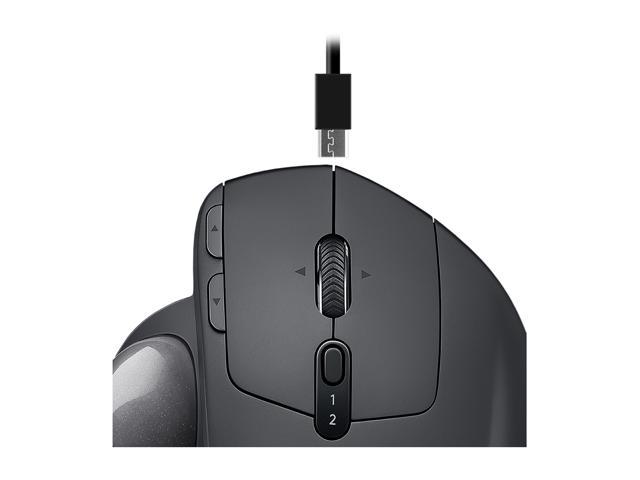 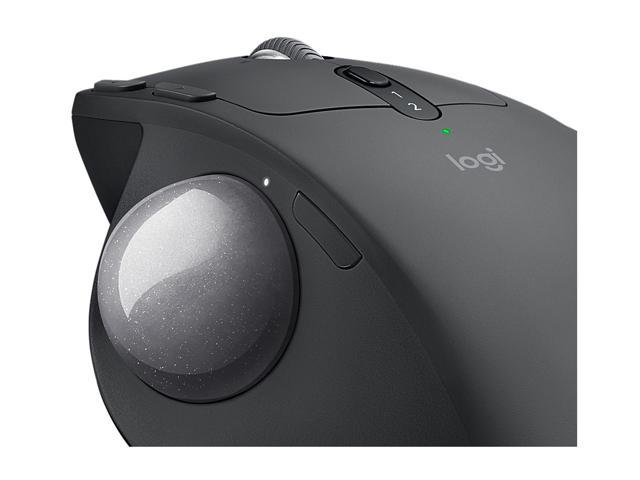 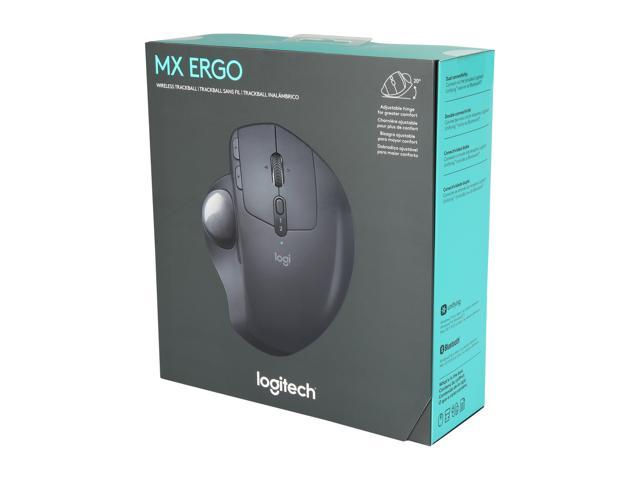 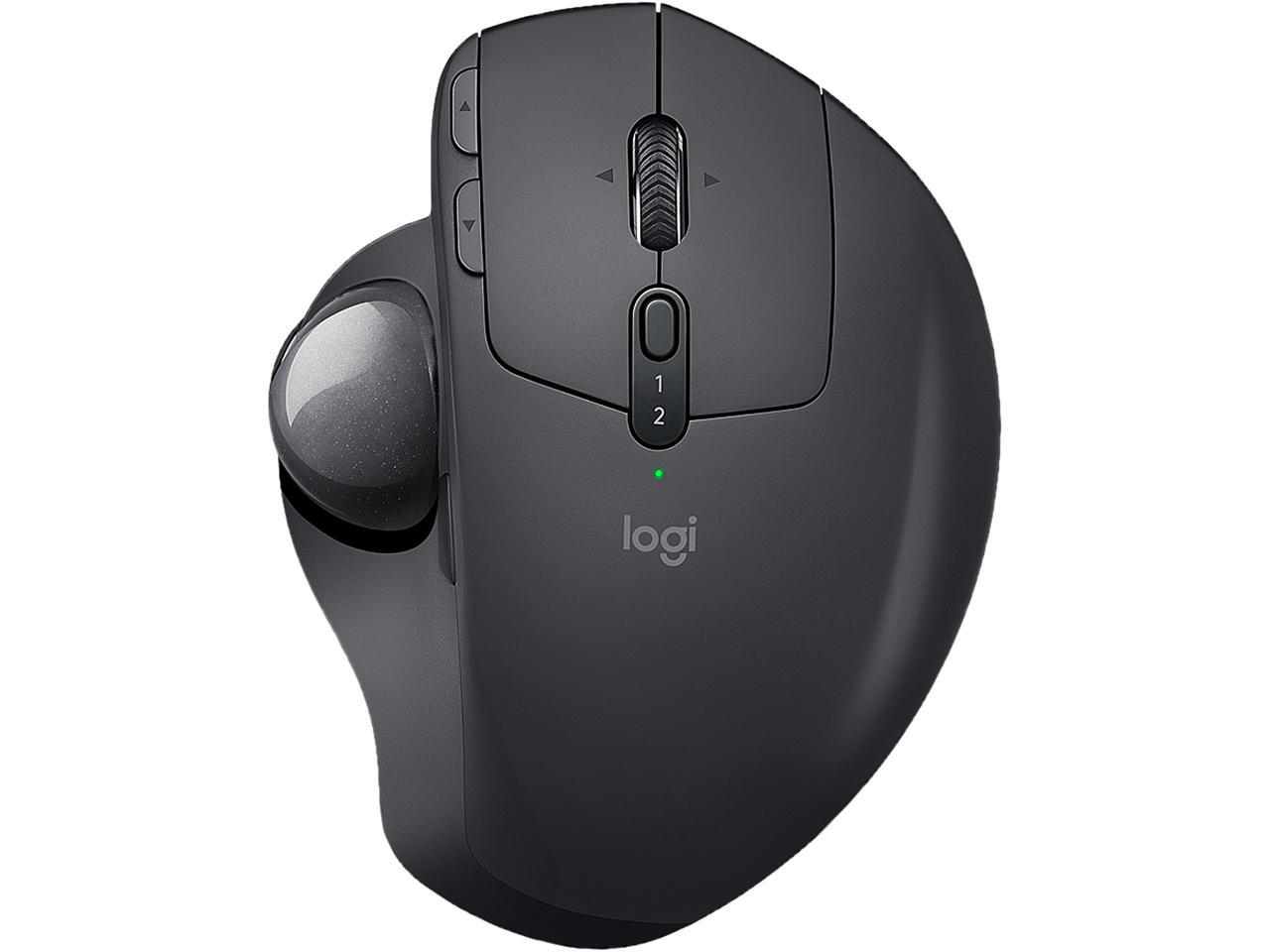 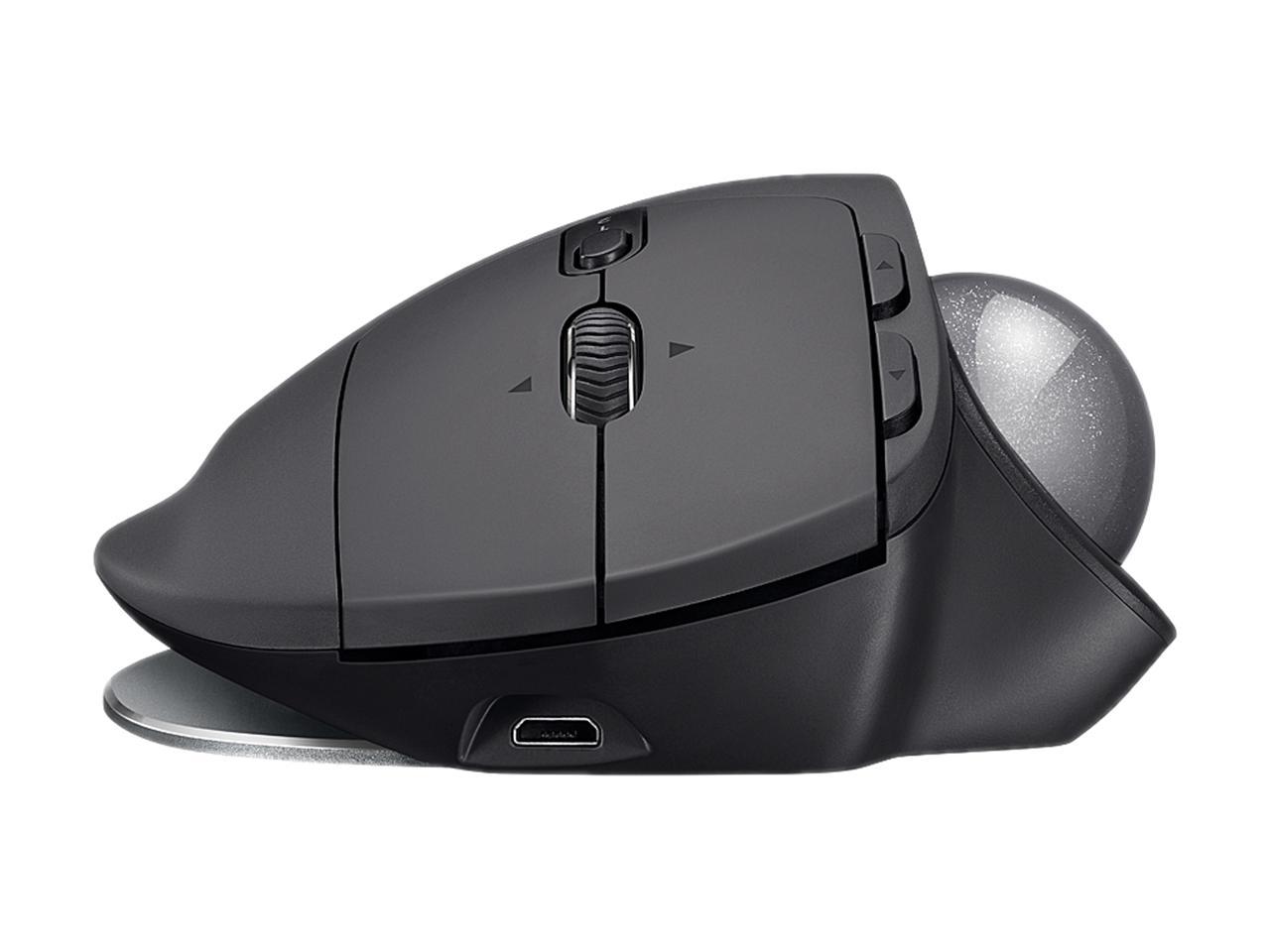 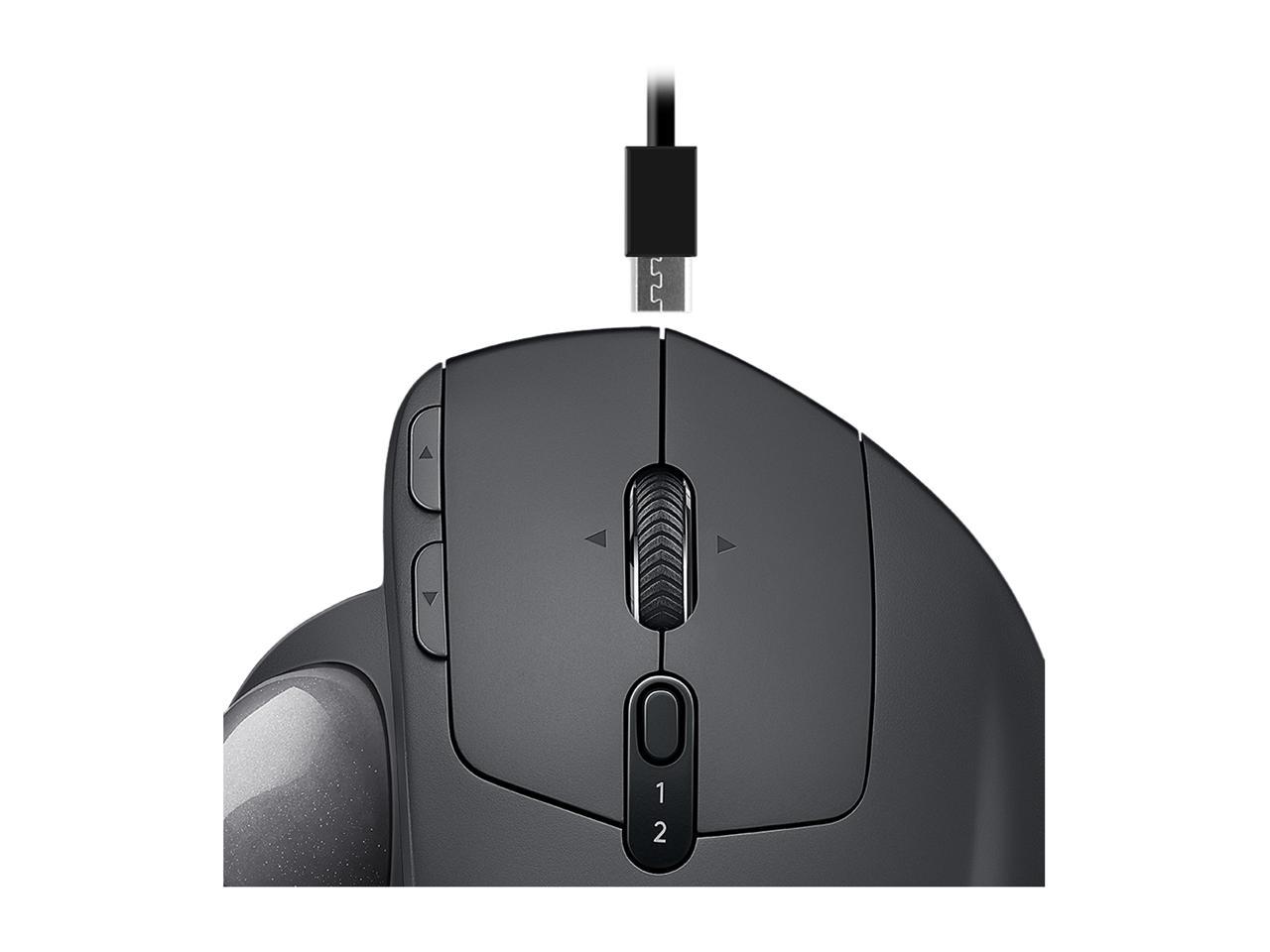 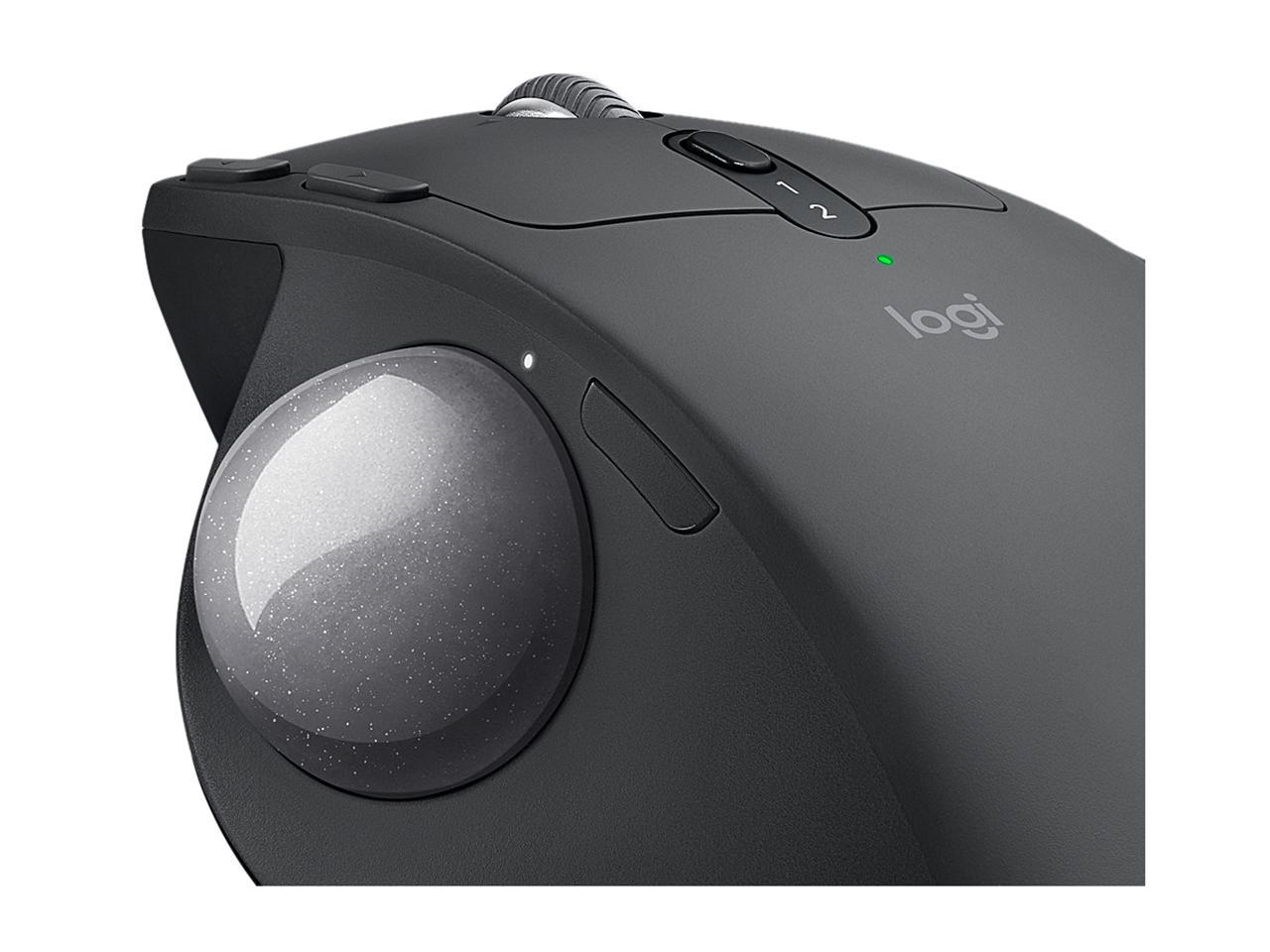 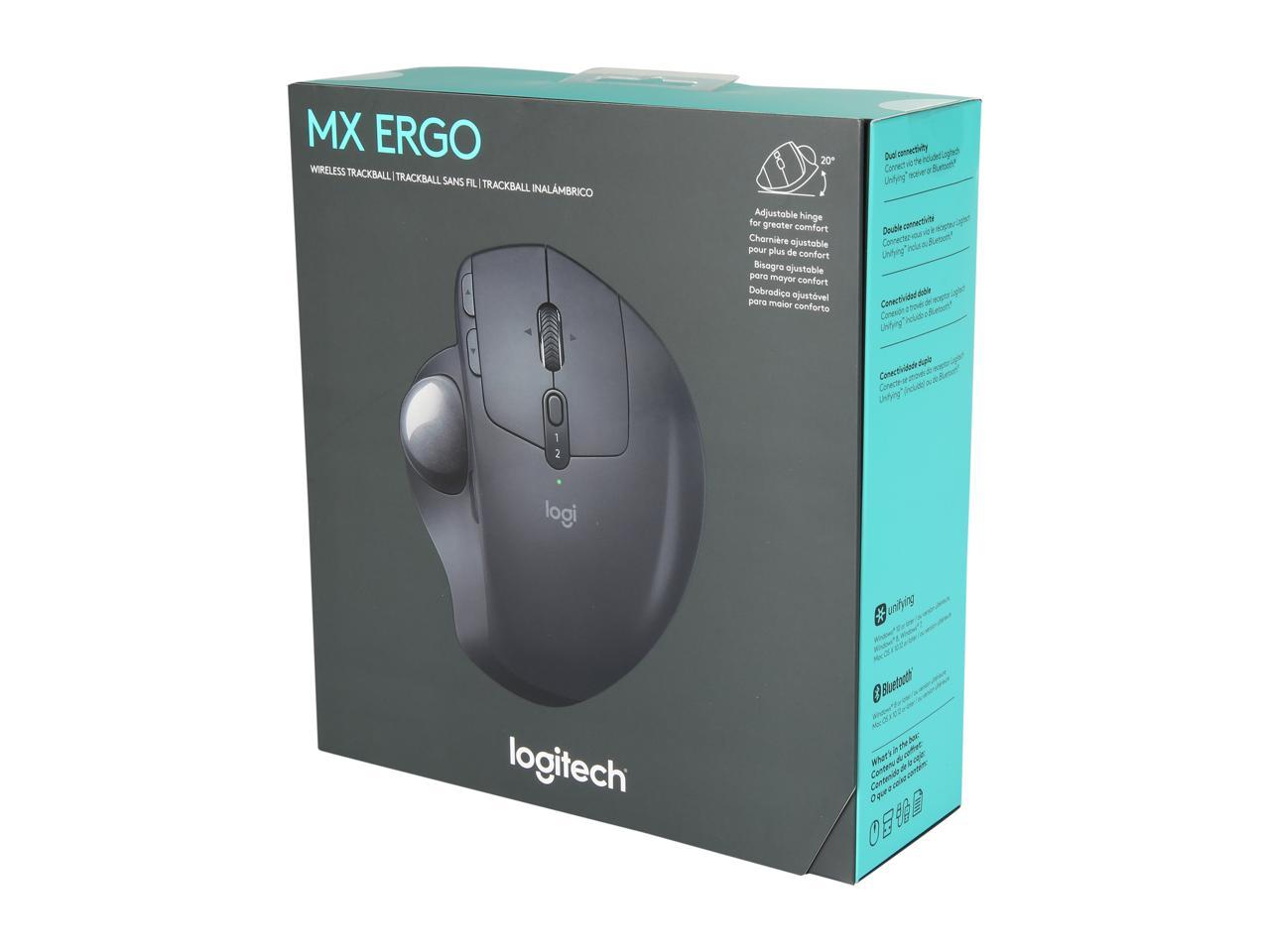 Learn more about the MX ERGO

Pros: Fits my large hand better (less arthritic pain) Grips surface better (Mine sits on the arm of my leather couch - my 570 was always falling off when my hand wasn't on it - popping the ball out and then a search commenced for the rolling ball...) This ERGO holds on nicely I like the dual angle base (great for relieving pain) see cons for how I think it could have been done better I like the grippy top surface better (see cons for concerns) As I do CAD work with this device the precision button is AWESOME. If you draw or need precise, pinpoint accuracy, this is the mouse for you.

Cons: Really the cons here are minor. First, the dual angle bottom plate should be multi-angle as we're all made a bit differently and getting just the right angle is important. This could be accomplished many ways - I'm going to try small wedges to get the angle just right. Next, I have used the 570 for years and periodically need to clean the skin oil build up on the top of the mouse. On the 570, the skin oil would literally melt into the finish and removing the build-up would also remove the finish in a tarry mess (sorry if that's gross.) Now the ERGO has a rubbery surface - I am hoping it's easier to clean and doesn't melt like the 570's did. Finally, unlike the 570, the ball clunks a little from time to time. I have not quite figured out why this is happening but there seems to be a tiny bit of slop in the ball cage which allows for it to 'clunk' but it strictly an annoyance; it does not affect how it works. PRICE. C'mon logitech.... this mouse is going for nearly $100 just about everywhere and that's just nuts. Fortunately I found it here on Newegg for less than $80 but still...

Overall Review: Ok I've owned this mouse now for nearly a year. The left switch is already worn out (this is a problem I've had with 570 mice in the past - I was hoping that this mouse would be better-built given the price) as it won't hold a selection. For instance, if I try to select something by holding the button down and dragging, it's nearly impossible. Pressing harder doesn't help. I am still in warranty so I'm hoping Logitech will have improved the switch when I get a replacement.

Cons: Same bad buttons that Logitech uses on all their trackballs and mice

Overall Review: I bought this to see if it had better buttons than the M570, sadly it does not so after 6 months to a year you have to add debouching software to keep it from double clicking on a single click. Also the buttons start feeling mushy edit: 11/6/2019 well that's it the left mouse button doubles clicks on a single press and dragging no longer works, right button is now sometimes works sometimes not. Order the Adesso iMouse T30 to see if it has better buttons

Cons: I find it less ergonomic than the cheaper M570 Also harder to clean than the M570 And it costs more than 2x the M570

Overall Review: Good build quality overall but not worth the price.

Pros: The trackball can rest either flat (like the M570) or at a 20 degree tilt. The latter is actually slightly more comfortable. The tracking is as good as the M570. I haven't gotten used to the precision tracking (the button next to the thumb rest controls it). Finally, bluetooth compatibility. One issue though, you need a second mouse to configure the bluetooth. Also, finally a rechargable mouse (although the battery life on the old M570s was very good).

Cons: I'm not sure why they made the bluetooth/2.4Mhz switch is on the top. It is usually a configure once an forget it. A hardware rather than software switch on the bottom (better labeled) would have made more sense. Except for the high precision button, the buttons are compatable with the M570, so no upgrade there.

Overall Review: I've gone through a large number of M570 trackballs. This looks like a good upgrade. I'll see if the new arm angle helps my tendonitis.

Pros: I have two MX ERGO wireless trackballs for my four console computers. The dual use feature is very convenient. They are also absolutely reliable and work great even from a distance. I also appreciate the configuration features. Fantastic product!

Overall Review: I would definitely recommend this product to anyone interested in a professional well designed Trackball.

Pros: Works great. Nice when you don't have a good surface for moving a normal track mouse with. The magnetic back is awesome for changing the orientation, or mounting the mouse on a horizontal surface.

Cons: Difficult for fine control of the cursor, but I think that's normal from track ball mouse. If you're used to trackball I think this one is probably on par with what you'd expect.

Pros: Dual Bluetooth and Unifying USB dongle functional (the only reason is got 2 stars instead of 1) Scroll Wheel side clicks added

Cons: So many cons...... The first is the complete failure in their design of the tilting base. Nowhere on their website, box, or product listings, do they mention that their "smart hinge" is nothing more than a heavy steel plate with pivot point held on by MAGNETS. When using it, any force much greater than resting your hand on it will pop it back in the other position. Not only can you not lock it in the 0 or 20 degree position, if you accidentally rock it from the 0 to 20 and your pinky overhangs the edge, you can pinch it. What in the hell Logitech? So now, when you knock it off your desk, not only do you have to find the ball that popped out, you also have to find the steel plate that flew off into space in the opposite direction. It is unusable without this plate BTW! Logitech obviously knows the magnetic pivoting base plate is awful since they don't mention that is how it works anywhere I can find! So remember those magnets, well, I opened this in my shop to use with the system on my workbench, and my MX Ergo was instantly covered in steel filings. Yeah, had I known, I either would have opened it elsewhere, or not ordered it at all. When in the 20 degree position, it is also almost impossible to pick up one handed like with the M570. Logitech took almost everything bout the M570 and tweaked it in the wrong direction. There is no pinky lip on the right hand side, there are sharp edges where there used to be smooth, and the new low profile back and forward buttons have sharp corners. The top of the shell has a sharper curve radius with a butyl rubber overmold that just feels clammy in the hand. This is going to rot and fall apart over time, just like the small piece of rubber overmold did in the pinky rest on the Trackman Wheel. The left and right click buttons are extra loud with what feels to be a bit more travel than the M570. It is HEAVY. Over 9 ounces. I sometimes like to pick up my M570 and place it on my chest when leaned back in my chair. The weight combined with the difficulty in being able to pick it up with my thumb and pinky have ruined that flexibility. Plus, this is now a clunky weight in my travel bag, not to mention I have to remember the magnets so I don't wipe my credit cards if I happen to set my wallet next to it. The scroll wheel kind of has a papery noise to it almost like it has a bad bearing. No more convenient storage slot for the unifying receiver when traveling. Micro-USB charging port.....come on....I almost had everything switched over to USB-C. I mean, you include the charging cord with it.....there is no excuse to have stuck with micro-usb.

Overall Review: I have 5 M570's on various machines. I am glad I bought extra replacements for the future because if this is what Logitech thinks is an improvement, us legacy Trackman lovers are doomed if they cancel the M570. I have owned every iteration from the original serial version around 27 years ago and each new version was mostly an improvement, until now. Logitech, why the hell didn't you just take the M570 and add the Easy Switch Bluetooth functionality. This would have been amazing. If you are trying to kill the Trackman line, you should have just not released a new model. Also, there is no way you tested this design with regular people, or if you did, you ignored all the negative feedback. If I had a 3D priner, I would print a solid base for it, take the magnets out, throw away the steel plate and epoxy the printed base plate with wedge on. I understand why you would think the ability to switch angles would be a good idea, and maybe it is, but this is a horrible execution of that idea.

Pros: love the way i can choose the angle of the mouse, and the ability to adjust settings, it feels so natural and my hand doesnt hurt anymore.

Cons: they could offer different color choices, but other than that it's great

Overall Review: yes i would recommend and yes would definatly purchase again