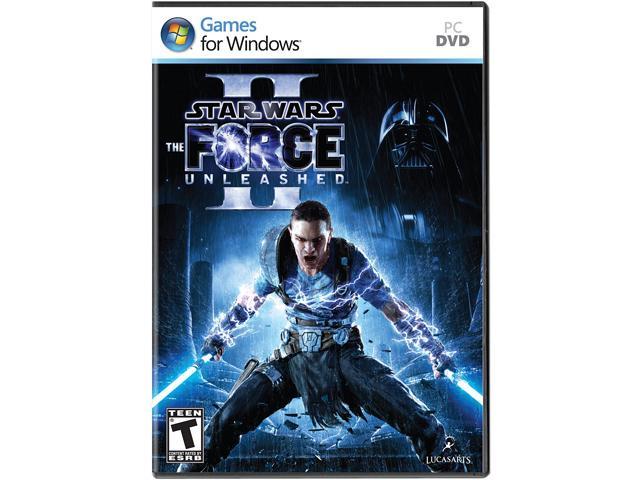 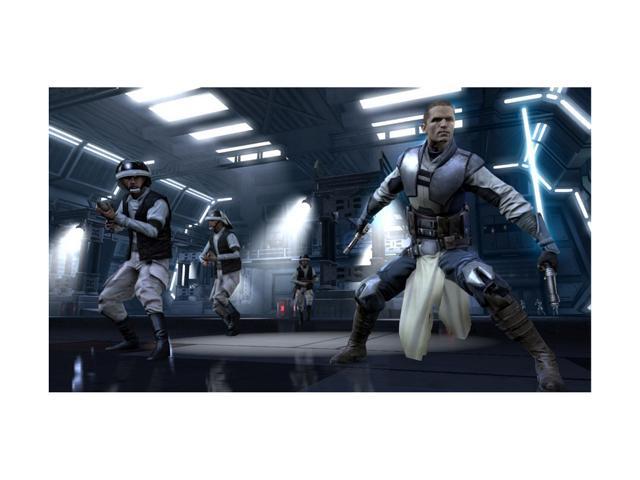 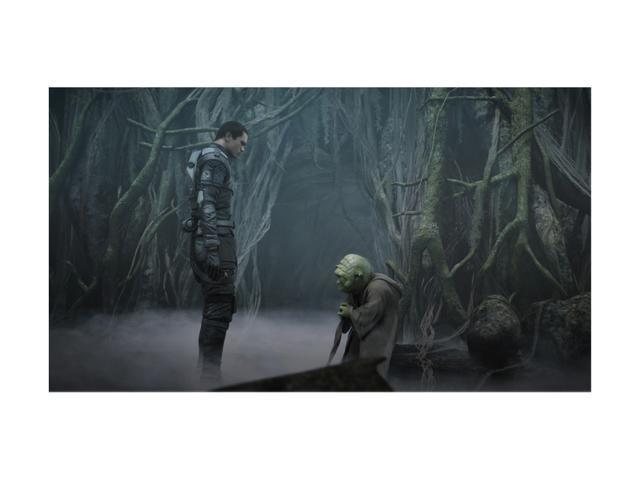 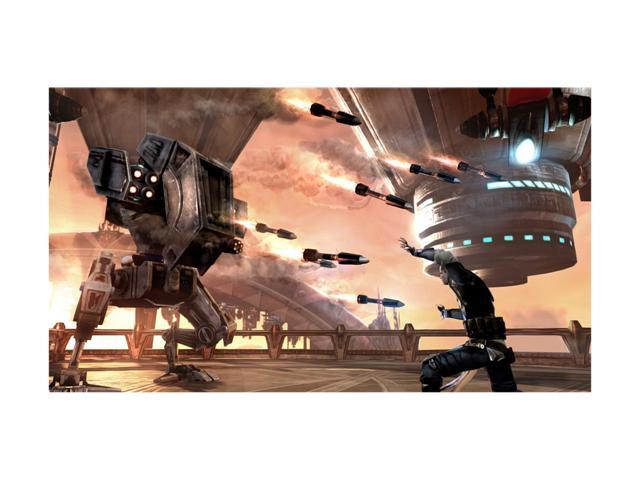 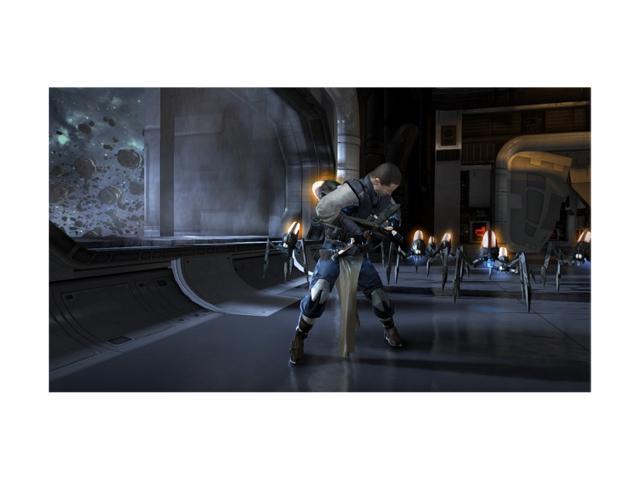 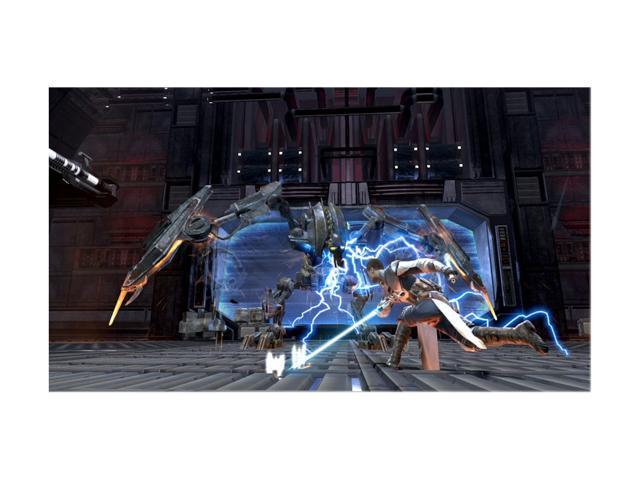 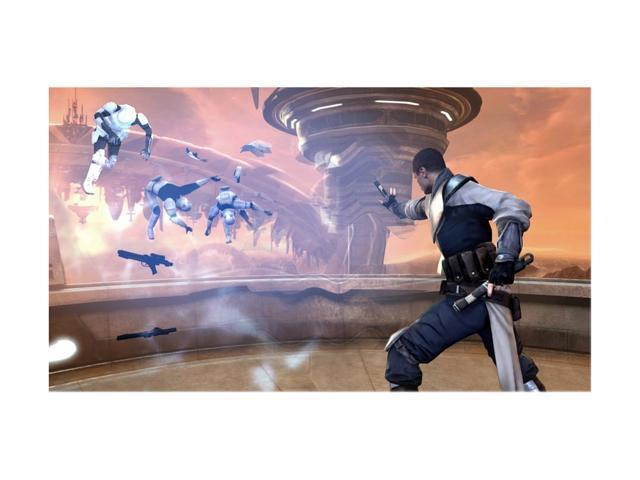 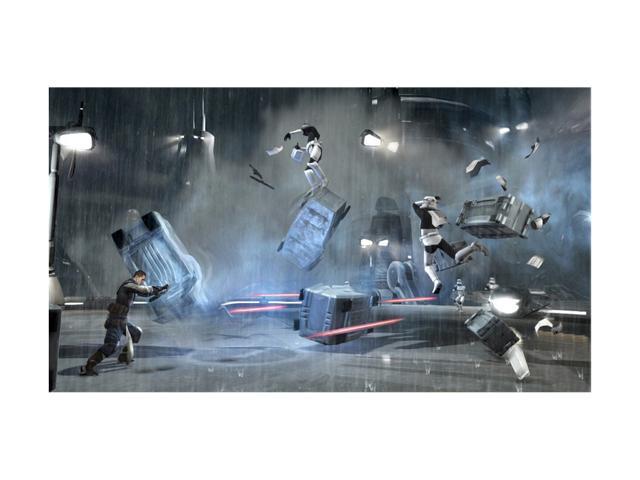 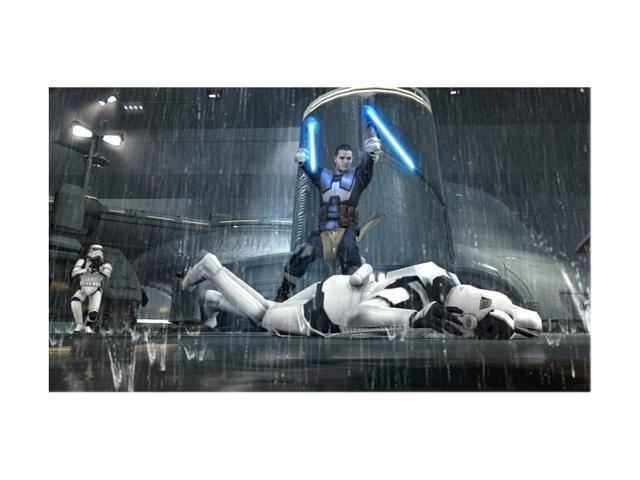 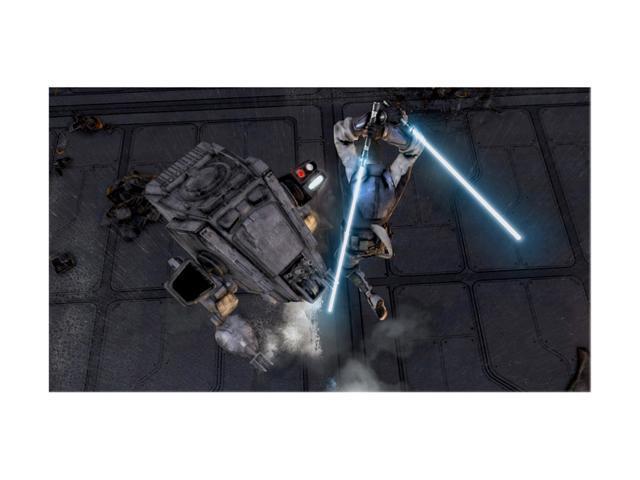 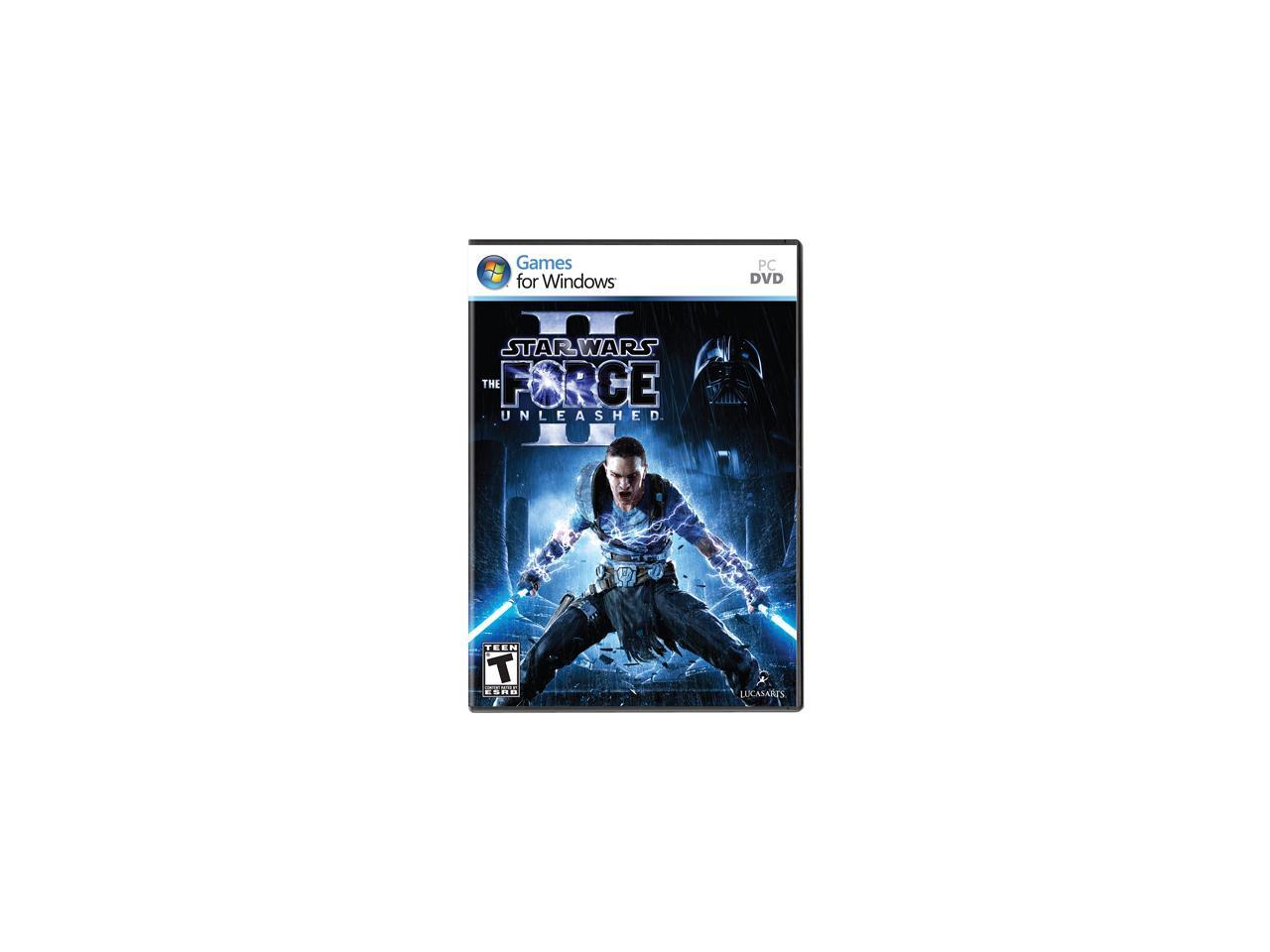 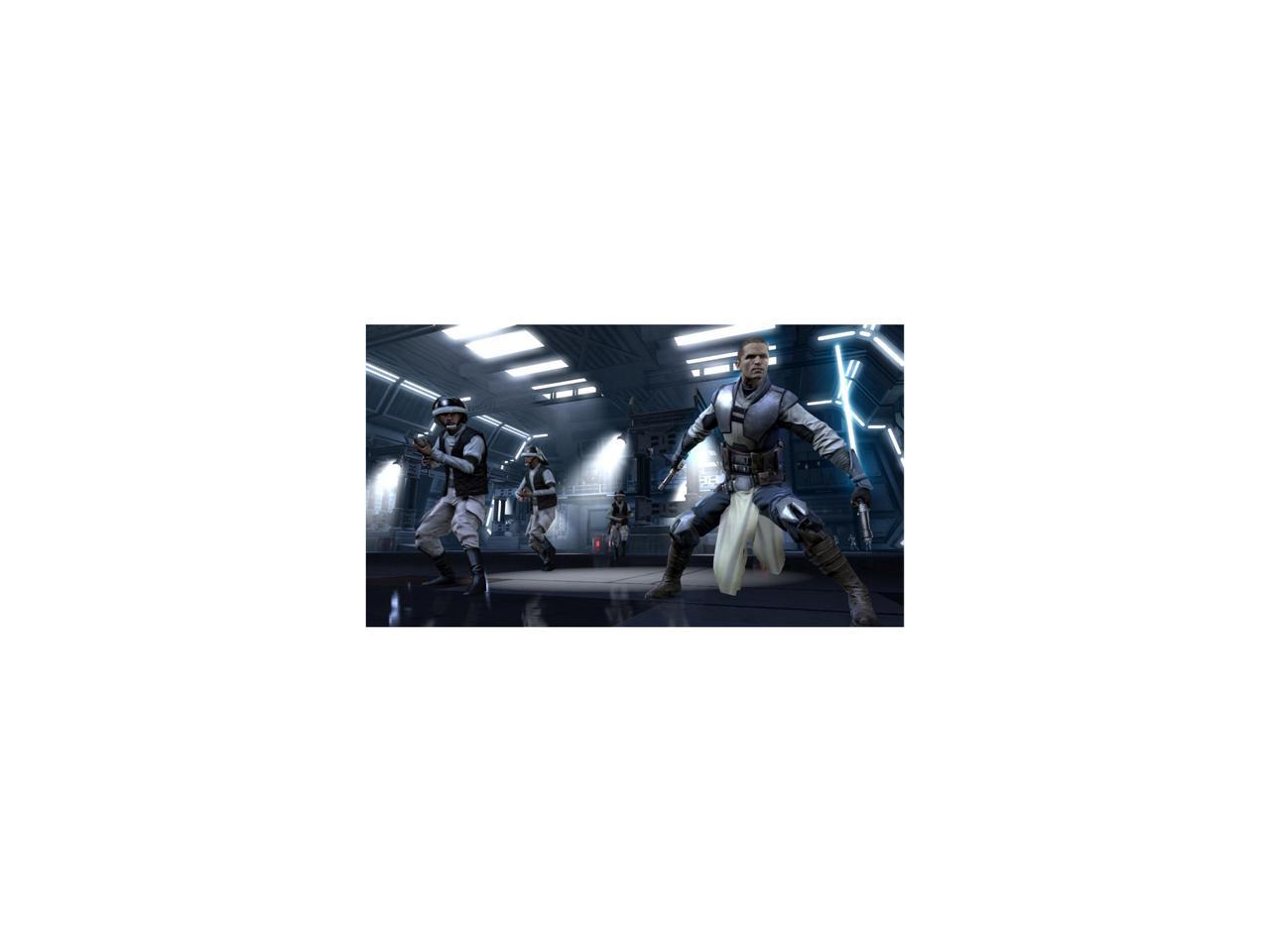 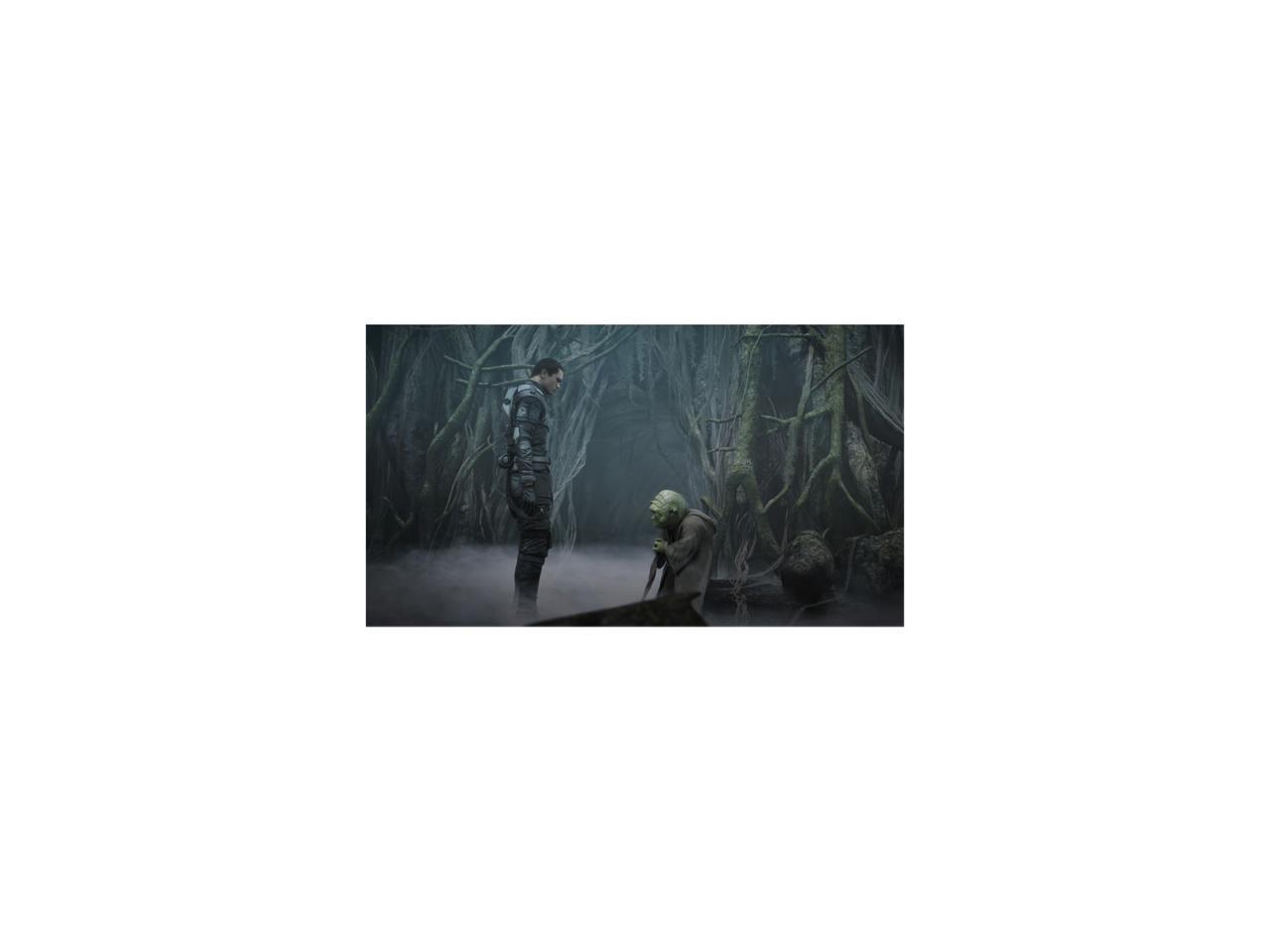 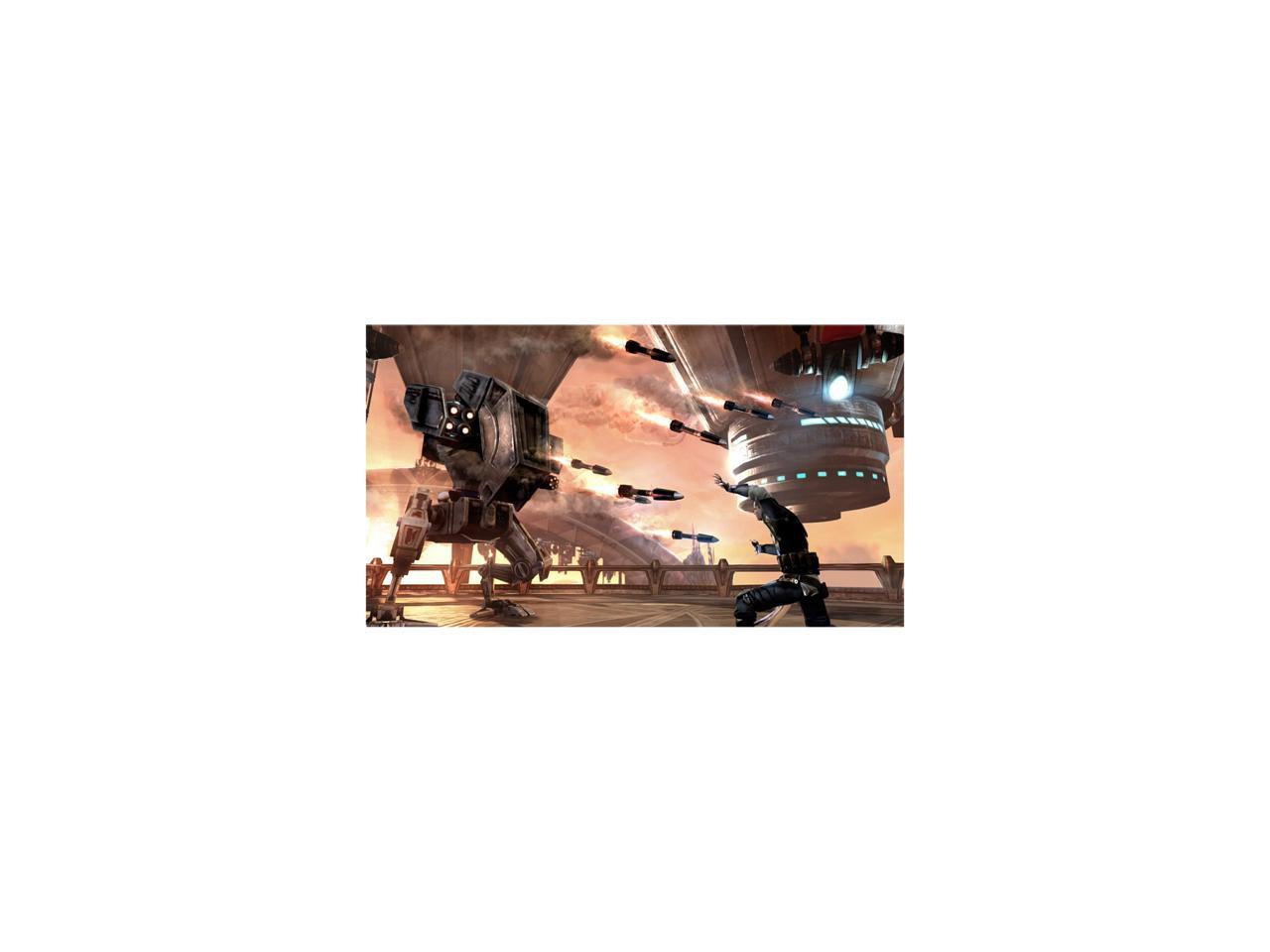 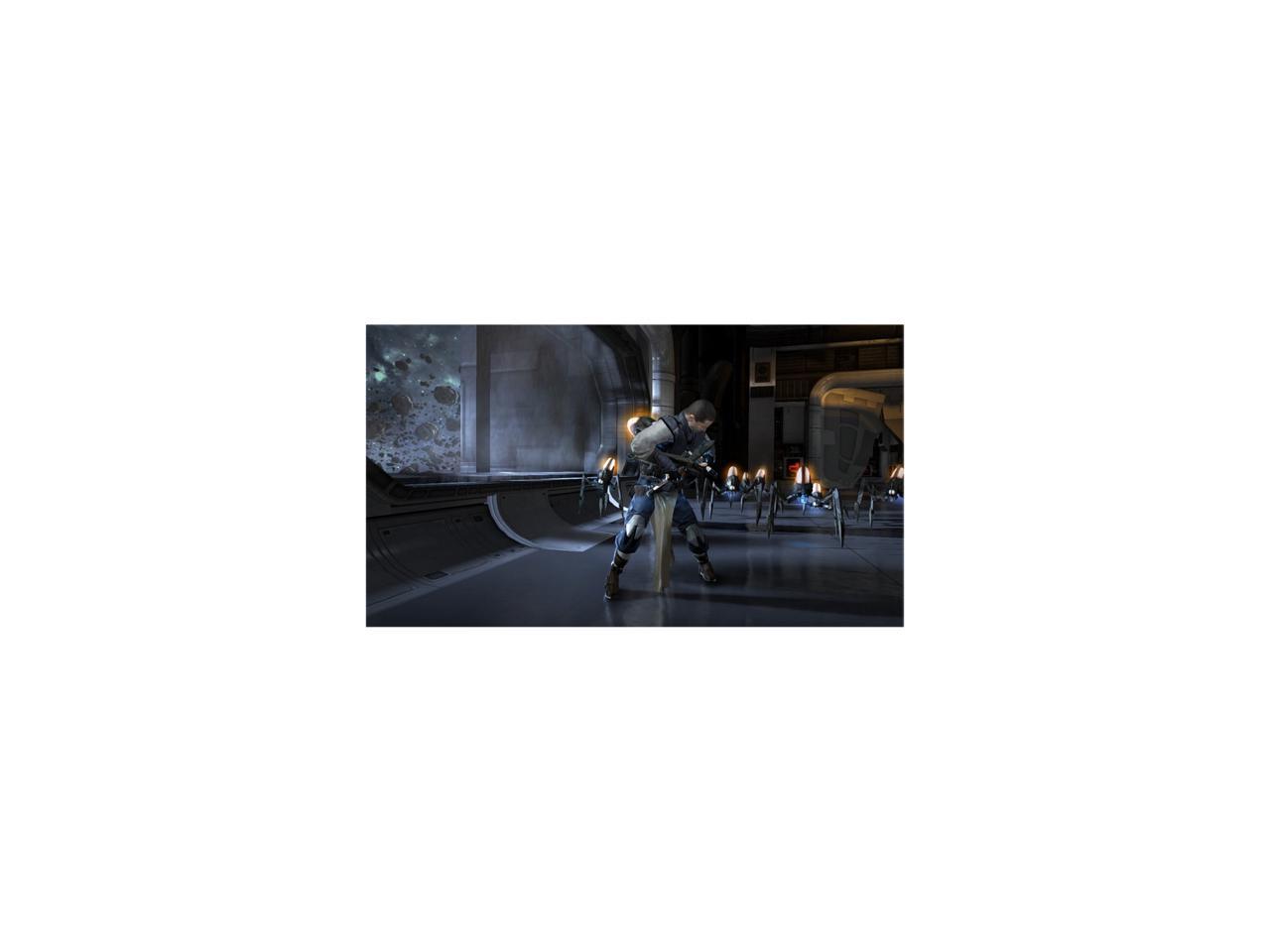 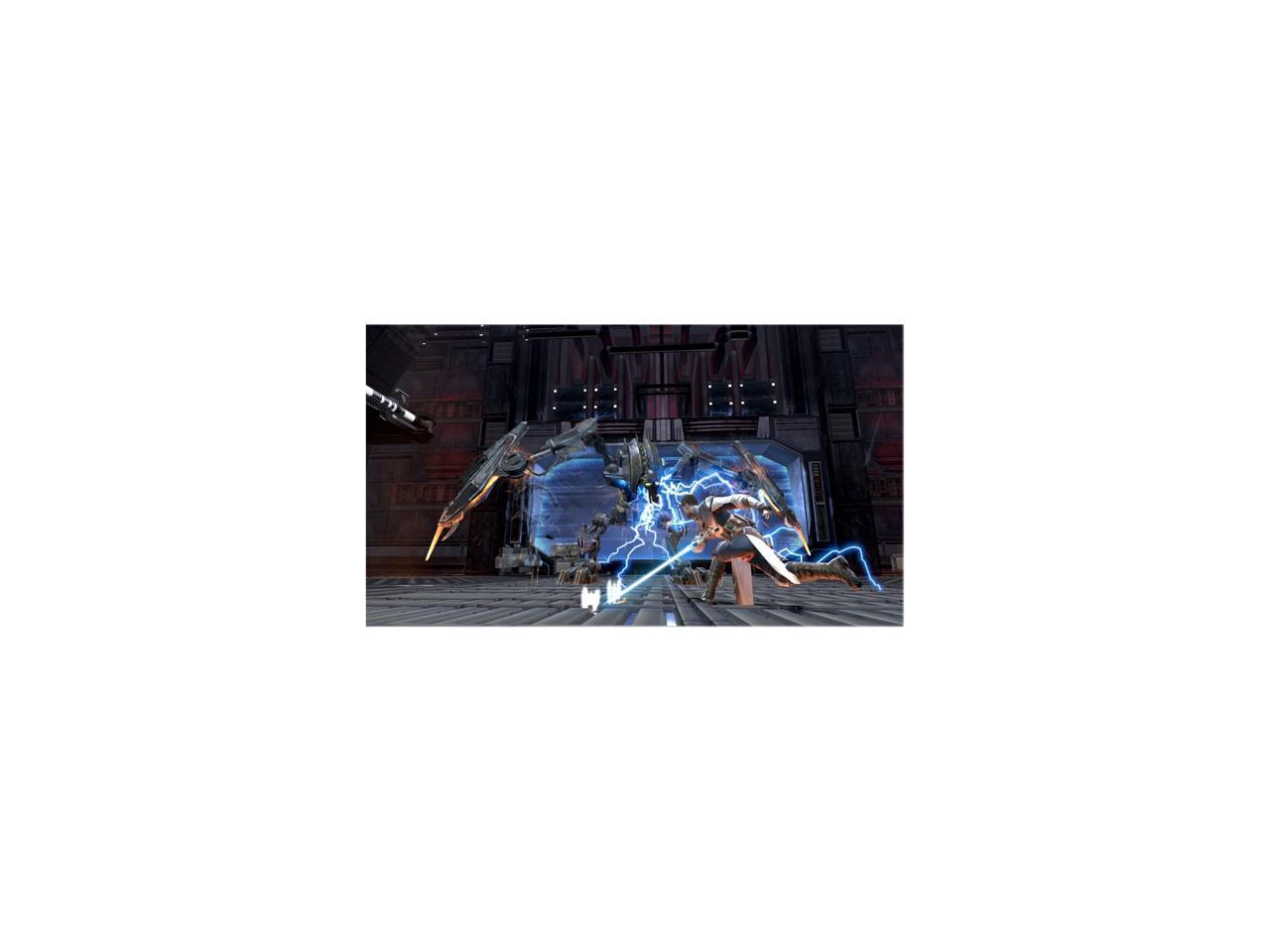 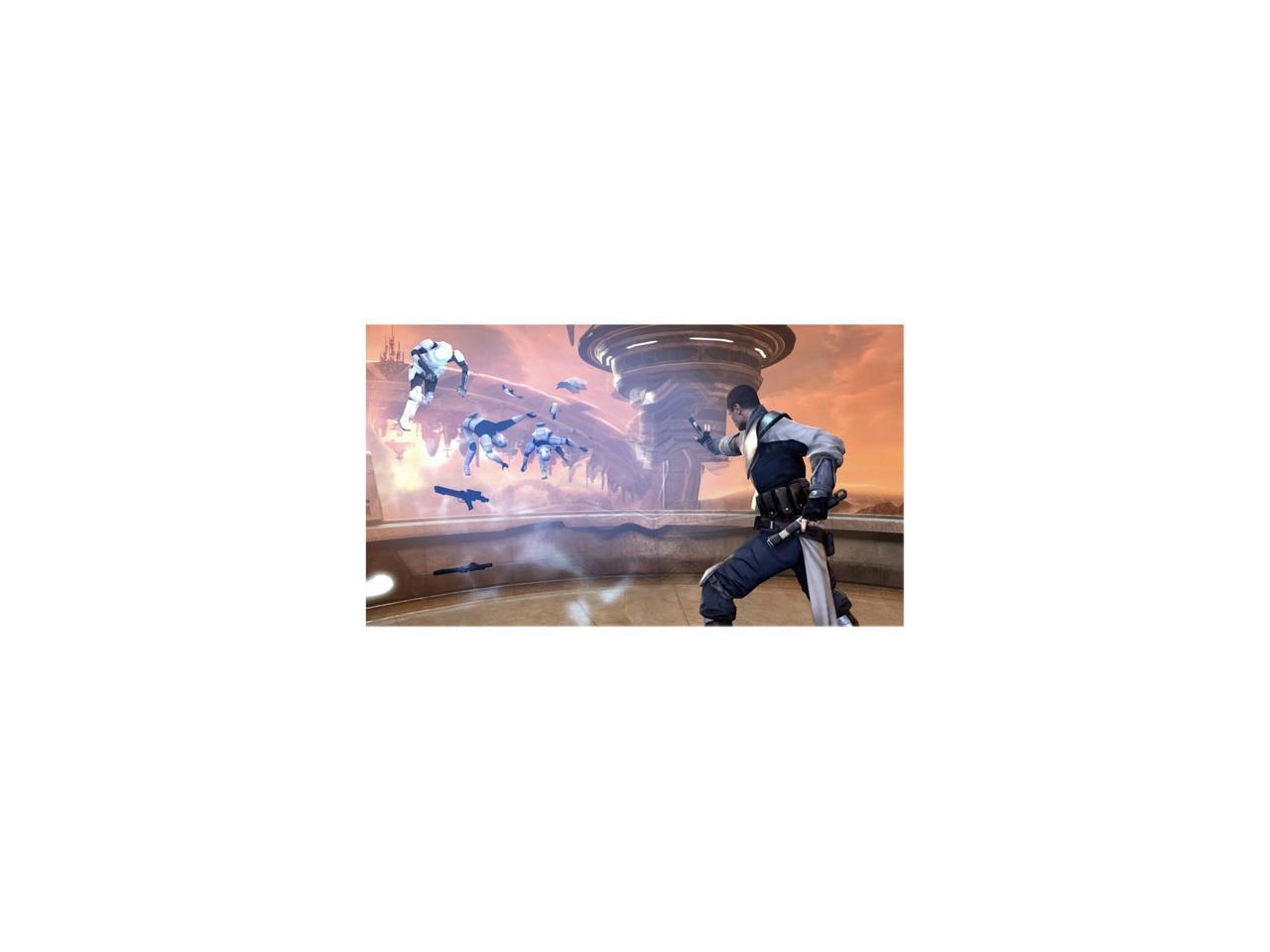 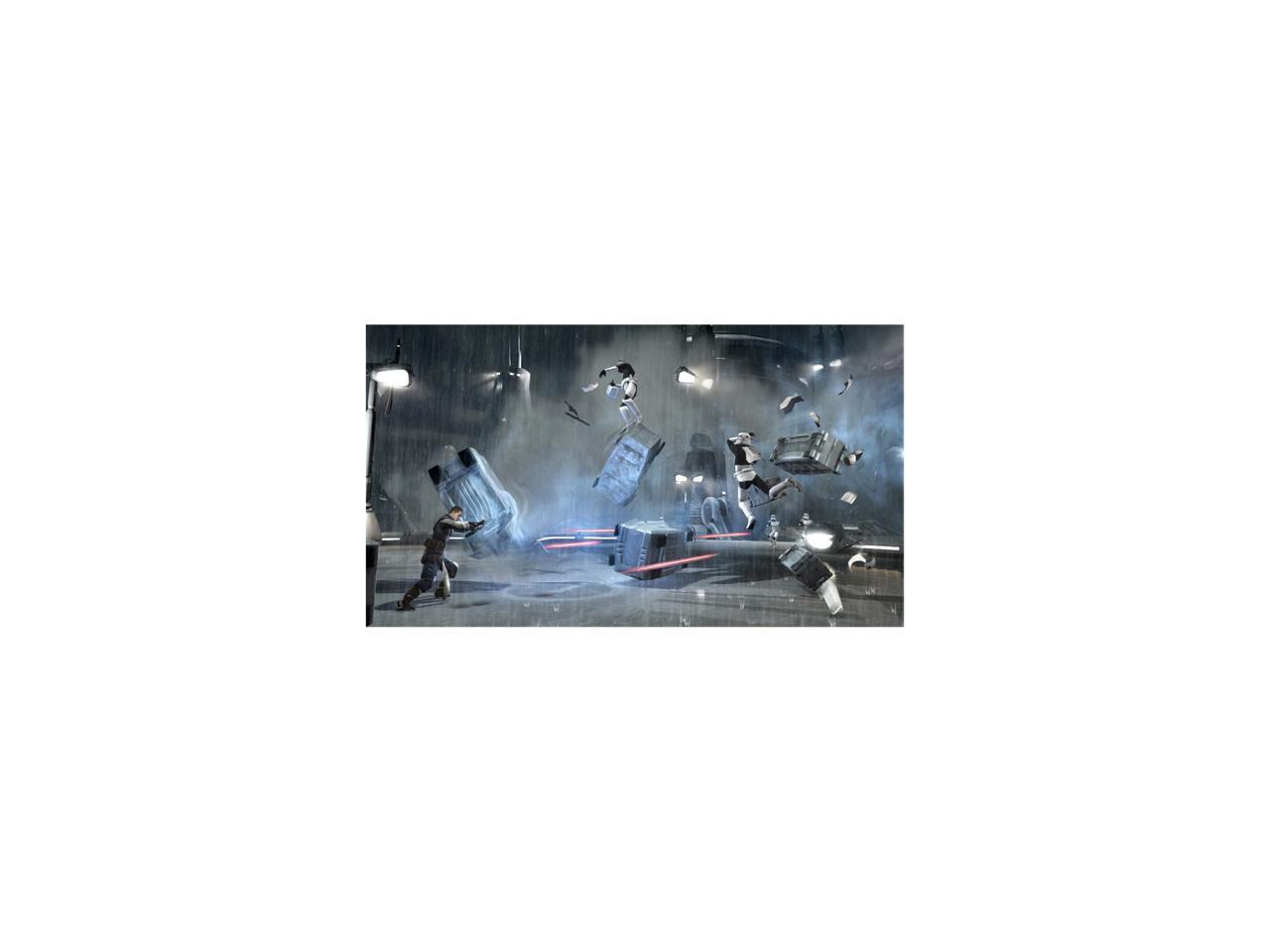 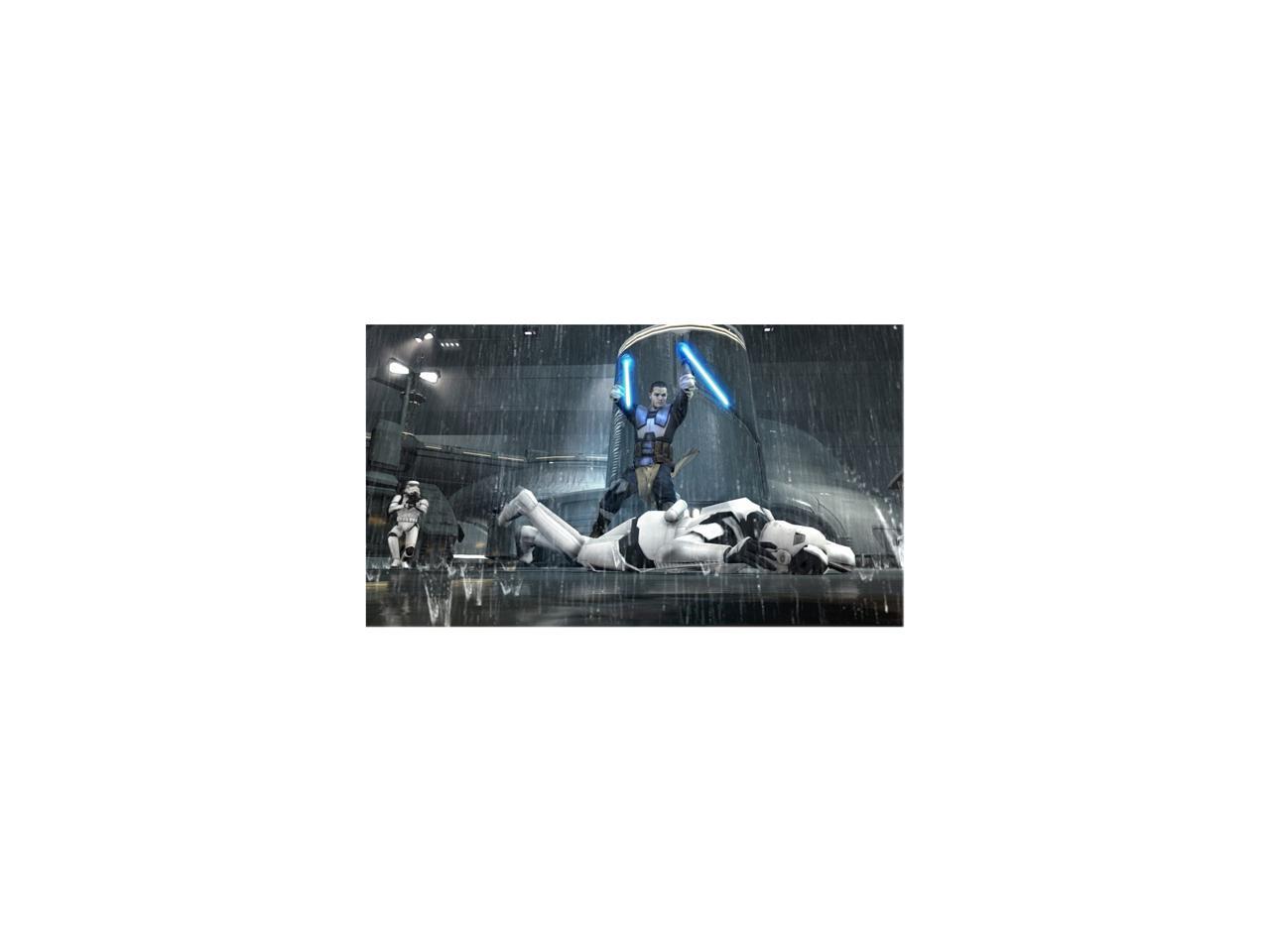 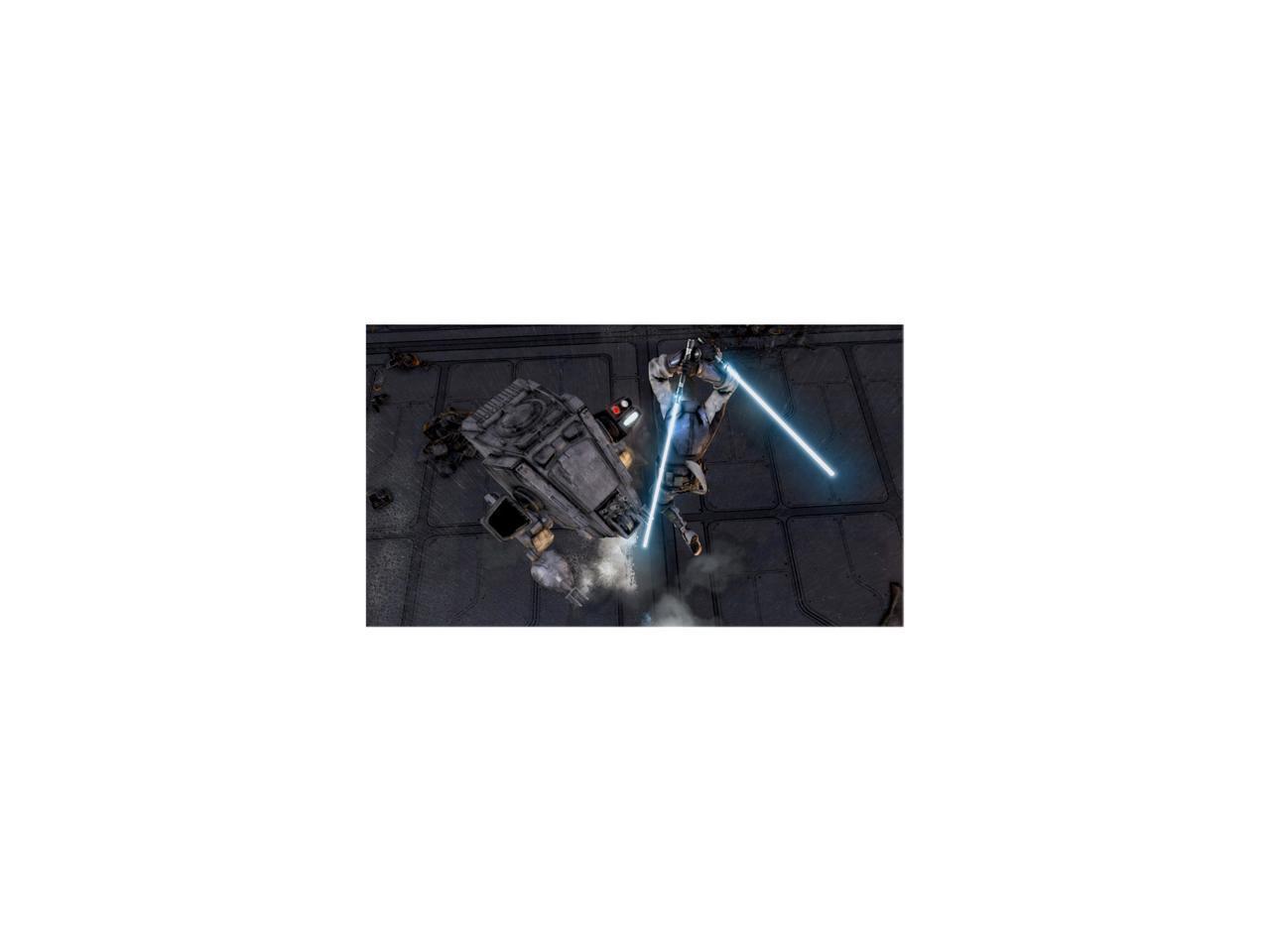 (6) Write a Review
OUT OF STOCK.
Overview
Specs
Reviews
The Star Wars Saga continues with Star Wars: The Force Unleashed II, the highly anticipated sequel to the fastest-selling Star Wars game ever created, which has sold more than seven million copies worldwide. In Star Wars: The Force Unleashed, the world was introduced to Darth Vader’s now fugitive apprentice, Starkiller—the unlikely hero who would ignite the flames of rebellion in a galaxy so desperately in need of a champion.
In the sequel, Starkiller returns with over-the-top Force powers and embarks on a journey to discover his own identity and to reunite with his one true love, Juno Eclipse. In Star Wars: The Force Unleashed II, Starkiller is once again the pawn of Darth Vader—but instead of training his protégé as a ruthless assassin, the dark lord is attempting to clone his former apprentice in an attempt to create the Ultimate Sith warrior. The chase is on – Starkiller is in pursuit of Juno and Darth Vader is hunting for Starkiller.
With all-new devastating Force powers and the ability to dual-wield lightsabers, Starkiller cuts a swath through deadly new enemies across exciting worlds from the Star Wars films - all in his desperate search for answers to his past.

Pros: The game play is fantastic and while some aspects to the game may seem repetitive, it is still fun. Def. one of the best games from the Star Wars franchise.

Pros: Gameplay is similar to the first one. Controls are all exactly the same. Plugged my wired Xbox 360 controller and couldn't tell the difference at first...

Cons: Game is unstable. Game will crash or lock up regularly. I just built a nice new machine so I shouldn't have any problems... (Phenom II x 6, Asus Crosshair IV, ATI 5850, 8GB DDR3, etc) unless had something to do with my RAID 0 controller. Extremely short... You can beat this game in 6-7 hours. Start a GameFly account for one month and rent the game for a console... it'll be cheaper.

Overall Review: Very disappointed. I love Star Wars and the first Force Unleashed. People have said that this seems like Force Unleashed 1.5, and rightfully so. The storyline is bleak. There are really only 4 levels... escape from Kamino, Save General Kota, Defeats enemies on ship, and go back to Kamino. There is technically a Dagobah stage, which sounds awesome, but you literally do NOTHING there. Yoda could've been so much more...

Cons: Like the rest of the comments it is a very short game... I mean even the challenges are very limited... I have basically completed every portion of the game in about a week. Storyline was quite weak as well. Also as of 1.0 there is a bug during the canon mission on the PC version. If you die at any point during that level you will be stuck trying to get an energy capsule out of a canon. You must restart the whole level over again and not die once. An annoying bug as of right now.

Overall Review: I never played the first one. So I have nothing to compare it to. I had no idea why I was trying to save the girl... I guess I needed to play the first one in order to understand the story line. I did enjoy the game, but almost no replay value after you have unlocked 90% of the stuff.

Pros: This game has some pretty good graphics and a smoother transition storyline than the original. Basically, when you're done with one level the game flips to the storyline and then back to the game seamlessly; no real pauses at all. The game also loads much faster than the first one. There were definitely some parts of the game that I thoroughly enjoyed and found entertaining. The camera angles are a bit easier to control when compared to the first one as well.

Cons: VERY, VERY SHORT!!! I got the game on 10/26 and finished by 10/30. Also, the fight sequences between main level characters are too drawn out. If you buy this game you'll see exactly what I mean. All in all, the game feels rushed and didn't draw me in like the original. The game isn't worth 39.99. It's a 15.99 game, at best. I enjoyed playing it, but was very disappointed when comparing it to the original. I would call this game "Star Wars The Force Unleashed 1.2" rather than 2. Yes, it feels that rushed and incomplete. It just seemed like they wanted to get something out soon and ride the success of the original before everyone forgot about it. Should there be a 3, I'll wait to see what others say about it first. Hope it's better than this rush job.

Overall Review: I played this on a pc with an x-box controller and had no problems at all. It appears you have to play the game 3 times or more to see what all they packed in to it. I've only played once, so I hope it's better the next 2 times around. I paid 7.50 for the original, so I guess I can't complain too much for paying too much on this one. Pert. sys info: I3-540 HD-4650 graphics card Win 7-64bit 4gb ram

Pros: Fun game to play. Played the first one and it had some really annoy parts throwing tie fighters and other stuff that you had to do but in this one they seemed to have added an auto targeting so as long as its aimed in about the right direction it will hit. Graphics are pretty good. I had no stability problems with starting or playing it. Very satisfying game play chopping the enemies to pieces ,zapping them to death, just pushing them out of the way, or getting them to kill each other.

Cons: Biggest con in my opinion I beat the main story line in under 6 hours and its seems they did it on purpose so they could do a Force Unleashed 3. Not really a con but I don't like that they integrated the crystal colors and powers. Tried playing the challenges but they are no substitute for playing the storyline.

Overall Review: Didn't try playing on a keyboard this time so I don't know how well they did the controls. Like the first one the force grip/throw is pretty useless except when they make you use it. More for entertainment than practical combat weapon. It is satisfying throwing an Imperial Storm Trooper across a room but I can do that with push as well. Wish they would do a RPG like this were we could chose to be Sith or Jedi without KoTR's chance system with several alternate endings were we could help the Jedi or Sith rise with 20 plus hours of game play.

Pros: I love the first Force Unleashed so much that I had to buy this one. I bought this game becasue you can download the PC version for $20 less than what the console version would cost. The game looks just fine on my Core i7/Radeon 5870 system. Starkiller looks great in the Sith Stalker Armour. I have a SammyF3 4 disk Raid0 setup. The game loads ultra-fast thanks to this setup. So far there hasn't been any stuttering problems created by low frame rates. The gameplay is better and the off camera angle problems aren't quite as bad. I love being able to download games through my vapor powered account. Thanks Newegg for making it possible to build a system that can play these games 10x better than any console ever could.

Cons: The graphics are just a bit too smoothed out on this game. I set everything to high and I'm just not too happy with the way everything looks. Maybe they should have done what they're going to do with Crysis 2 and make the PC version a lot better than the console version. One thing I loved the most about TFU 1 was the battles with the Jedi and other Force weilders. I'm disappointed that there weren't any boss battles like this. The last fight with Vader wasn't great. This game is all about hack and slash along with throwing things. By now the Salvation Glitch should have had a patch. I think this game suffers from a lack of creativity and it seems like a rip-off of some of that boring, poor fan-fiction. They need to make at least 6 free DLC stages to make up for the short depth of the game.

Overall Review: By now the Salvation Glitch should have had a patch. The Salvation part 2 cannon glitch on the PC version had 2 solutions... Either bring your own fuse from a previous room or don't die in that stage. DLC...To make up for this game, I'd like to see a stage where Sith Starkiller sends Luke on a mission to battle Mara Jade. Yes, this will make the hardcore fans mad. The could do a blast from the past stage where you're Darth Maul and you battle a Jedi. I'm one of those people who believe that in 5 years our TV's and game consoles will be connected to the internet. I predict that as internet connection speeds increase, more and more people will download games. In fact, I believe that in several years you'd be hard pressed to find a video-game title, music CD, and DVD movies in a store.