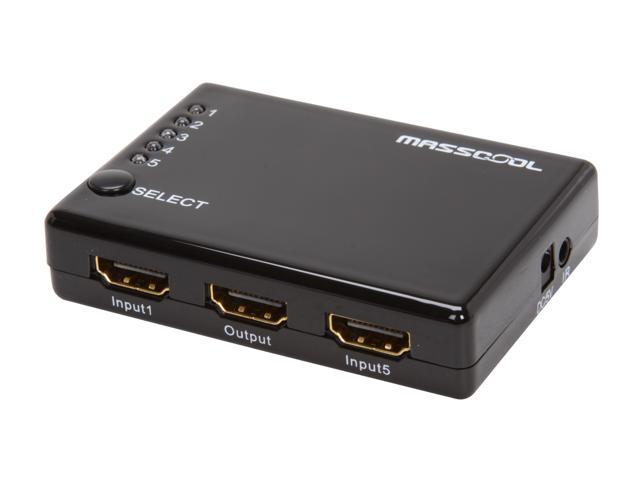 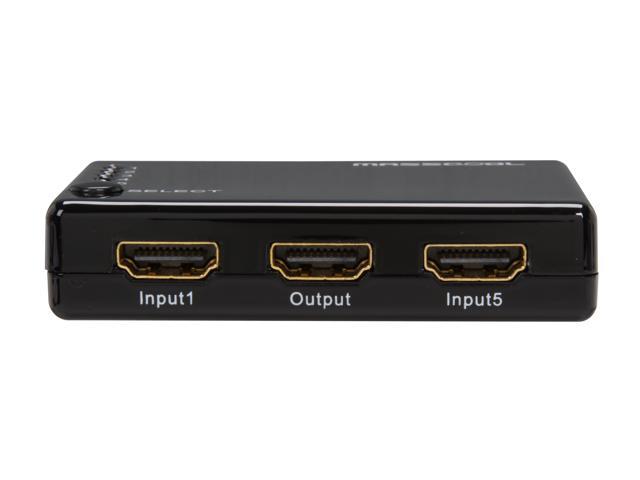 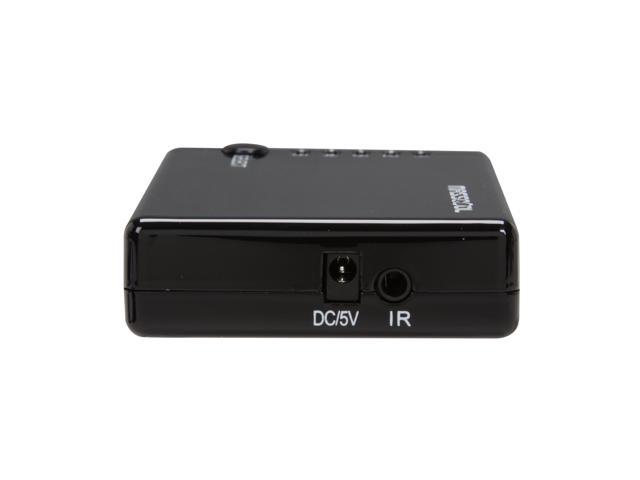 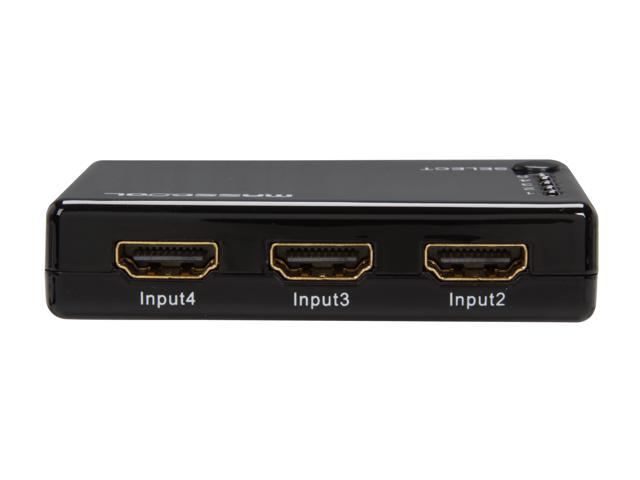 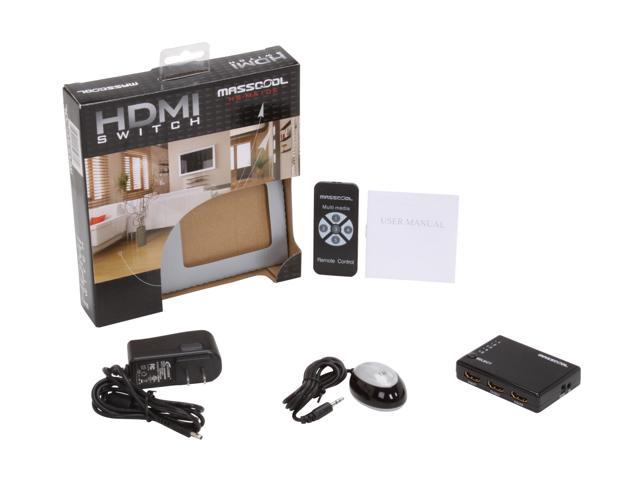 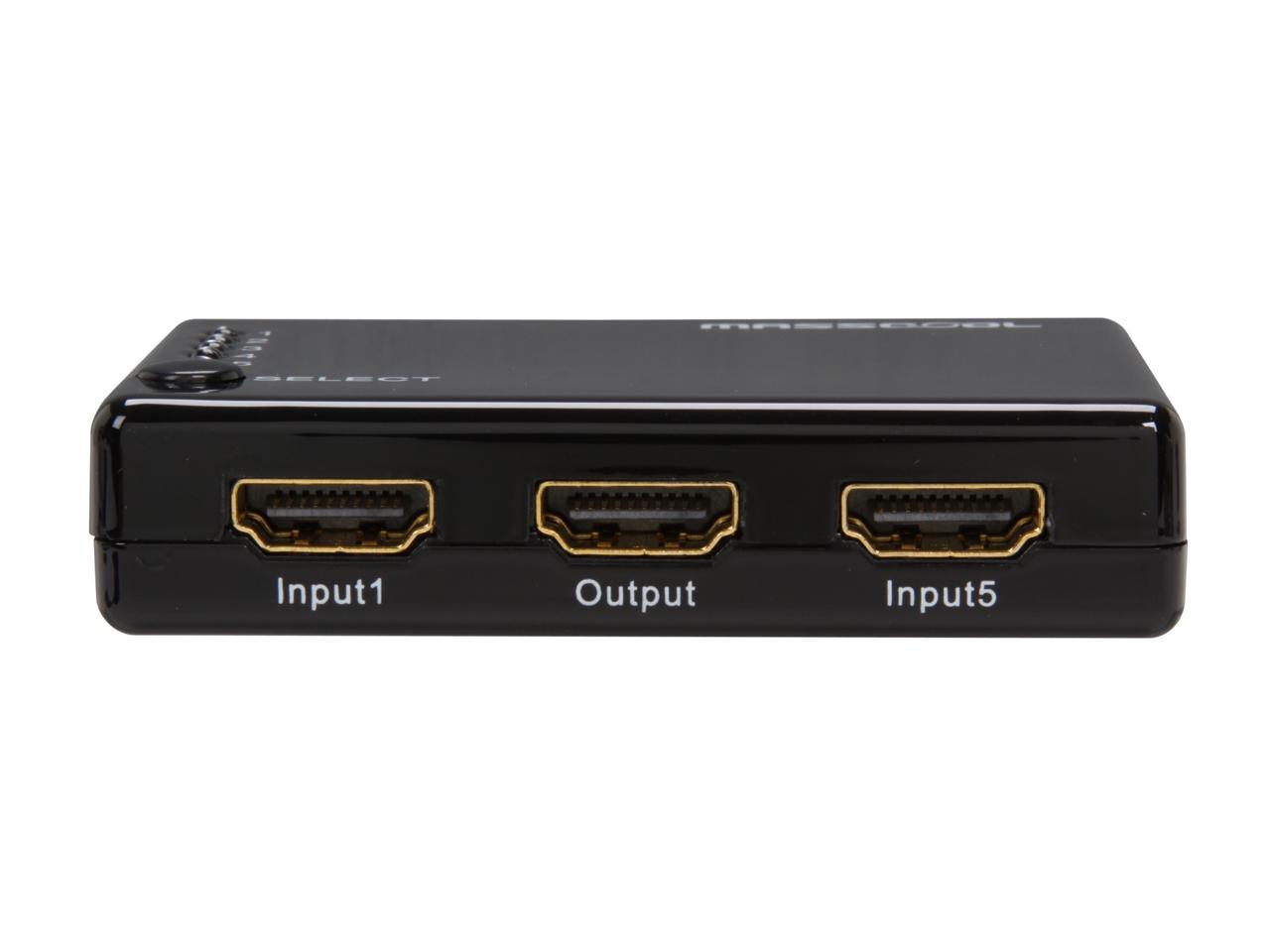 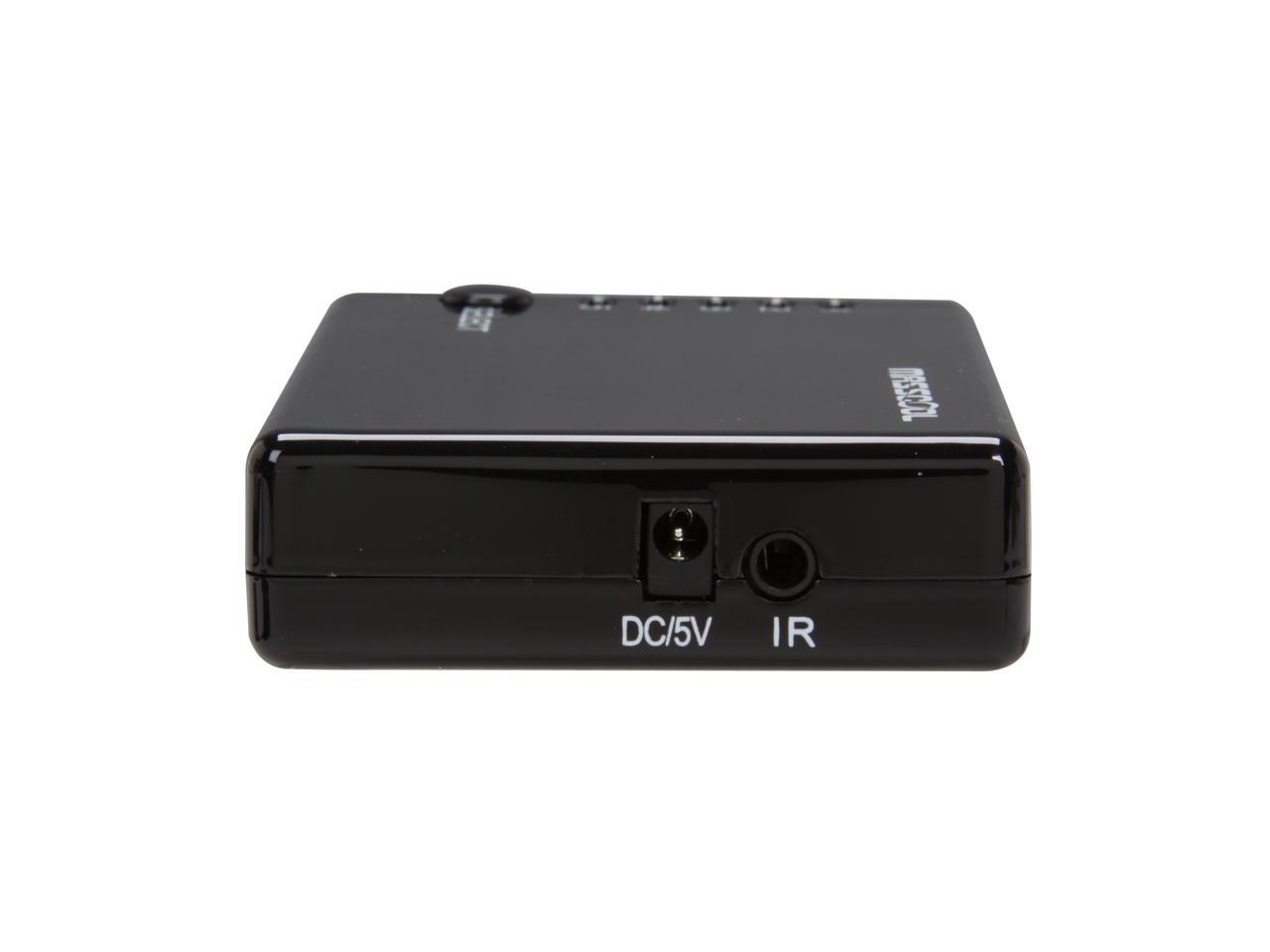 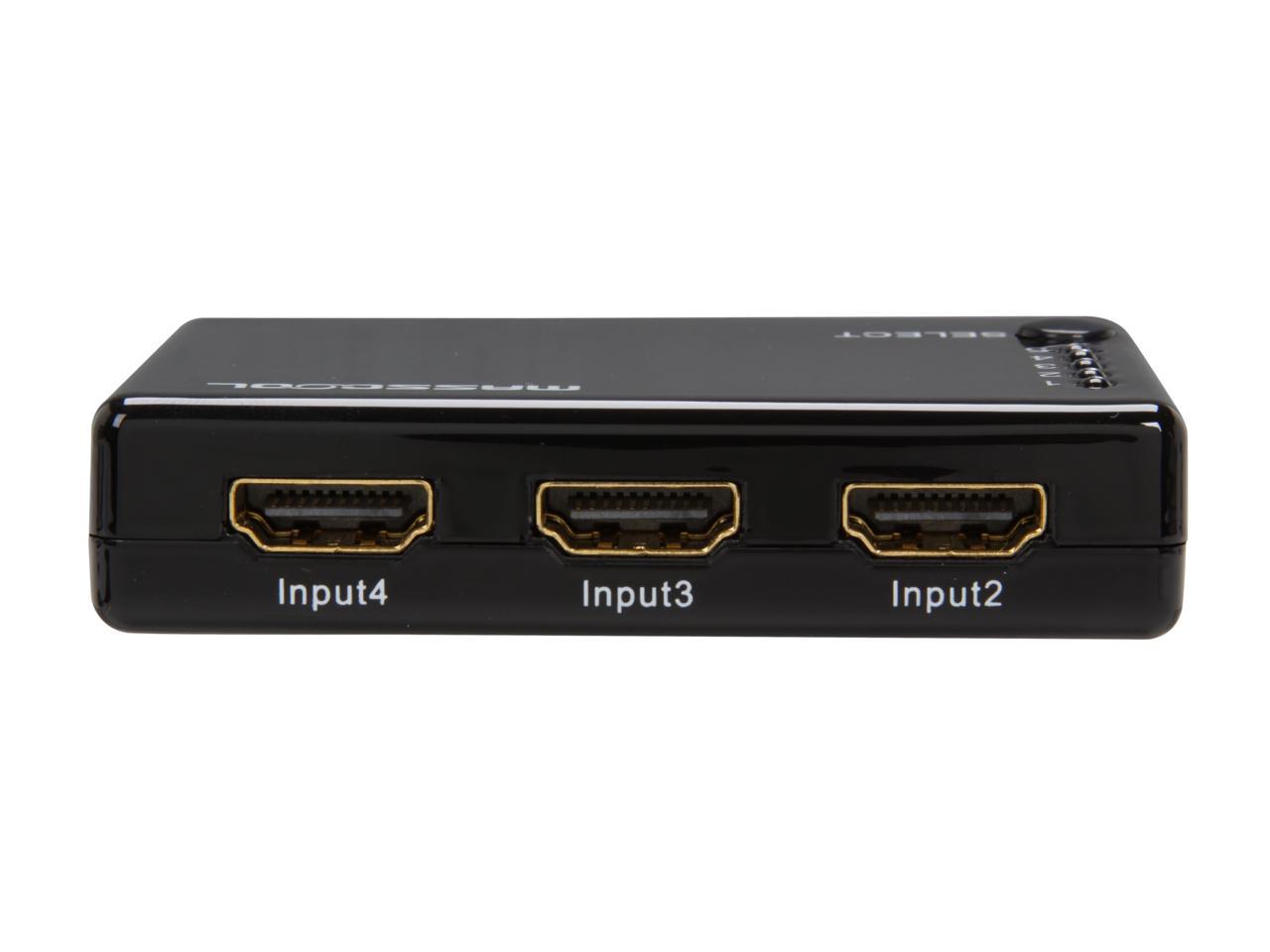 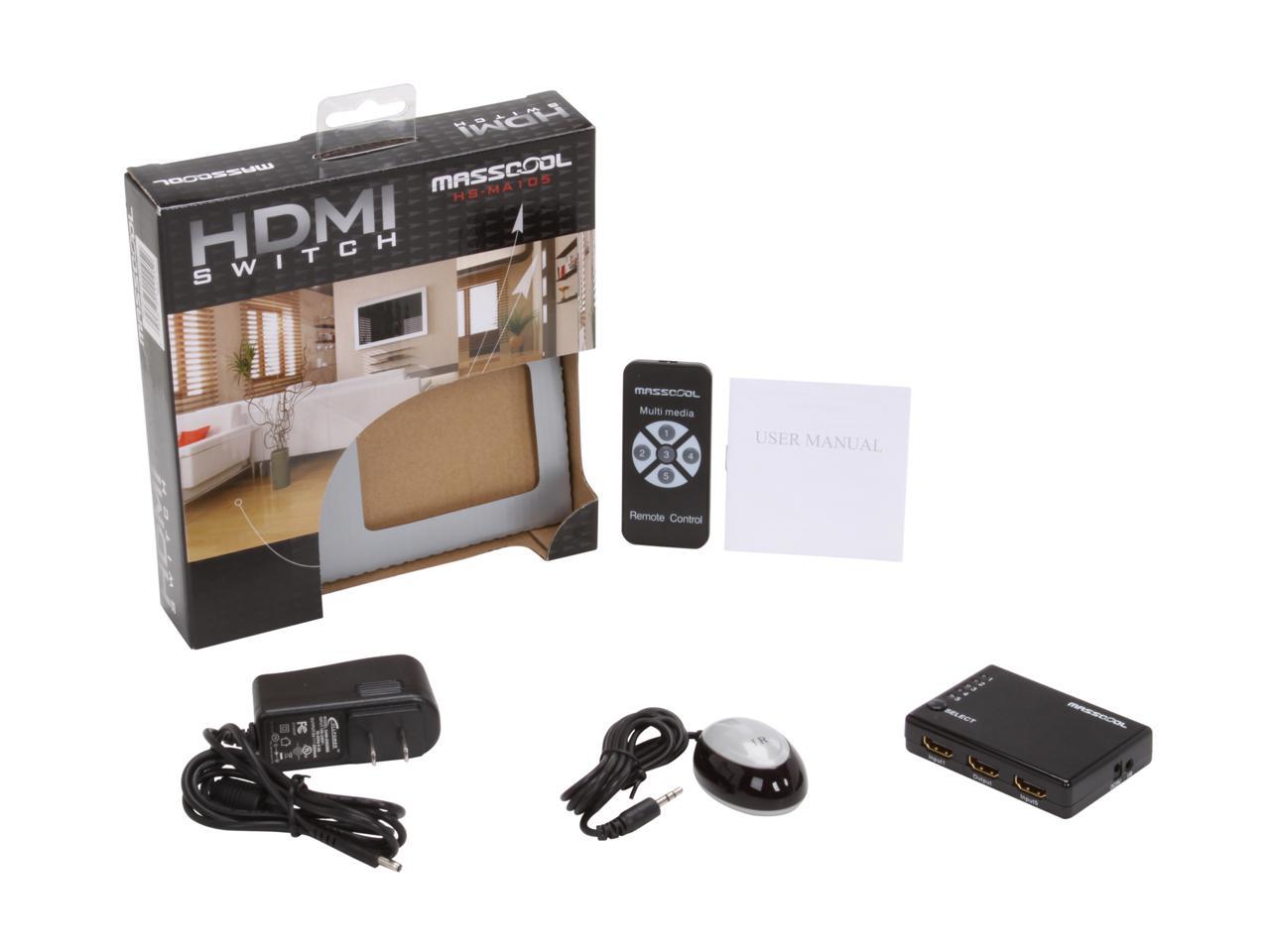 (61) Write a Review
OUT OF STOCK.
Specs
Reviews

Pros: Price is good. Has 5 HDMI inputs. Does include a power supply if needed.Remote is basic if you need it, however it auto switches for me fine.

Cons: None so far, it's working for what I wanted it for.

Overall Review: Years ago my daughter bought one of the 60" Samsung DLP TV sets when they were all the rage. Little did anyone know they were built with sub standard components which caused all kinds of headaches. A year and a half ago the TV went dead and I did a diag for her as best I could, and knew there was at least two bad power boards on the set ( it has no less than five power boards, all separate). She complained to and phoned Samsung numerous times to get the thing fixed after putting over three hundred hard earned bucks into the TV. Samsung agreed to fix it and the local service center replaced all five power boards in the set, most of them with Samsung recertified boards. A couple of them had to be replaced more than once before they got "good" ones. To make a long story short, the set had only 3 HDMI ports to begin with, and the HDMI 1 port was never right, and never would recognize the Blu Ray player as being turned on and switch over to HDMI port 1 automatically like it did before. That port finally quit working withh displaying video distortion, so I picked up this MassCool HDMI amplifier to route the Comcast digital cable box and the Blu Ray player into the HDMI 2 port. It works perfectly, switches back and forth as it needs to with no issue, and makes the TV and Blu Ray player useable. Kudos to MassCool for making a good working HDMI amplified switch. Good job guys, and highly recommended.

Pros: Does exactly what it says it will. This is a great product at a decent price (I got mine on sale here at Newegg).

Pros: This is more of a follow up review. I've noticed several people have complained about trouble with PS3 connectivity. I'm happy to report that I have no issues with this...I have connected several PS3 systems to this switch to test with...my PS3 slim, as well as a buddy's older style PS3 with PS2 backwards compatibility, and both worked without issue.

Overall Review: Devices regularly connected PS3 Xbox 360 PC Ruku 3 All runs into a HD Projector, all without issue. I'd recommed if you're having issues with a single device (such as a PS3) not working but others do, to swap some cables around or RMA the device, because it does function normally with PS3 systems for me.

Cons: Uses power adapter. Sensor for remote is not built in but a separate piece with a long wire. However, you shouldn't need the remote since it should auto-detect and switch the HDMI input when you turn on a different device.

Overall Review: I wanted to try this out before getting a second unit but now I see the price almost doubled since I ordered it. Also, don't forget HDMI cables in your order.

Pros: 1. It works 2. It's inexpensive 3. It's small & unobtrusive 4. Logitech Harmony software was a listing for it 5. My spouse is happy! ONE remote works everything!

Overall Review: Wish I had seen this sooner

Overall Review: 5 ports, remote, and it works great. can't ask for much more.

Pros: Low cost HDMI switch. Automatically switches to the device you power on last. No need to use power adapter, unless using the RF receiver. 5 HDMI in ports.

Cons: I had an Apple TV (Gen 2), Verizon FiOS HD Cable Box, Slim XBOX 360 S and a Sony 3D Blu-Ray (BDP-S570) player connected to this switch and it would not work at all with the Blu-Ray player nor would it work properly with Apple TV. One thing that came to mind is that the Apple TV doesnt have a power switch so I think any device that has constant power current may not work properly with this switch. However, I tried to switch it manually and it wouldnt pick up the signal. Only when I pulled out the power plug to the Apple TV and reinserted it would it switch and show up on my TV... Strange. As for the Sony Blu-Ray player... It could be the constant power flow, which I disabled, but still no luck -or- it could be the HDMI cable. Only reason why I mention the HDMI cable is because the Blu-Ray player is 3D ready and the latest firmware updates have enabled that feature. Maybe, just maybe, since it requires more bandwidth, my current cable is not sending the signal properly?

Overall Review: I cant say this is a BAD item, but it didnt completely work for my setup. Hopefully, its just the HDMI cables I am using, but I cant say for sure. For basic HDMI connections, this switch should do okay. It just didnt work for me... In some cases, you get what you pay for. That might be the case here.

Pros: This HDMI Switch is exactly what I was looking for! It has 5 inputs for all your home theater needs. The added remote is also nice when you have multiple things running and need to switch between them. It eve auto-switches to the most recently turned on thing.

Cons: The auto-switching can not be turned off when you don't want to use it. But it only takes a few seconds to push the button and have it turn back so nothing major.

Overall Review: I would recommend this to anyone looking for a way to easily hook up multiple HDMI devices to one Home theater.