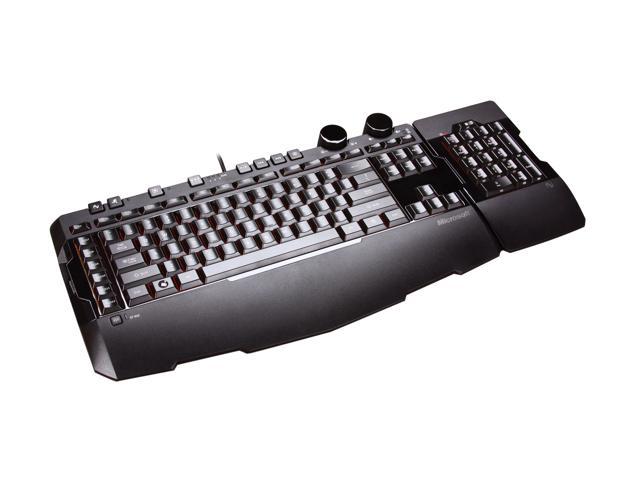 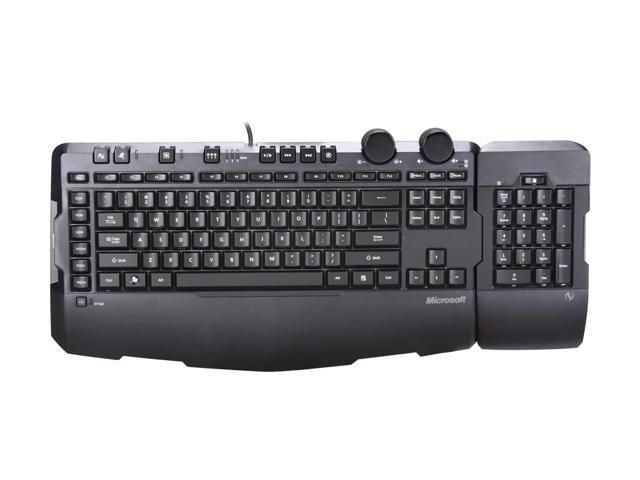 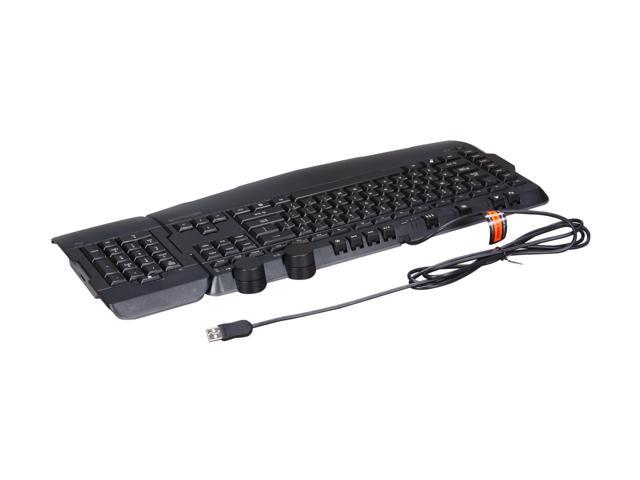 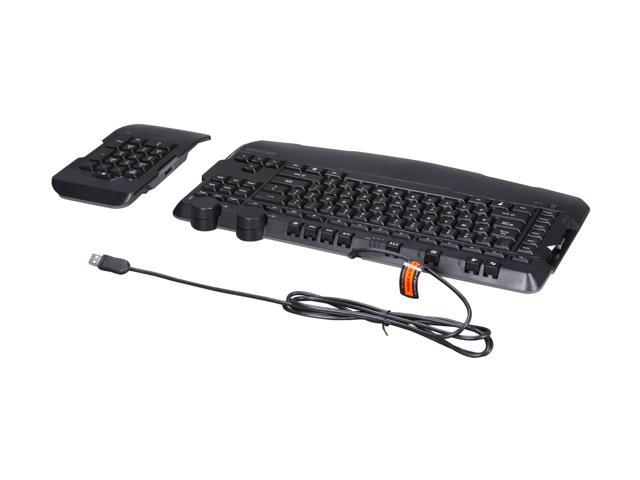 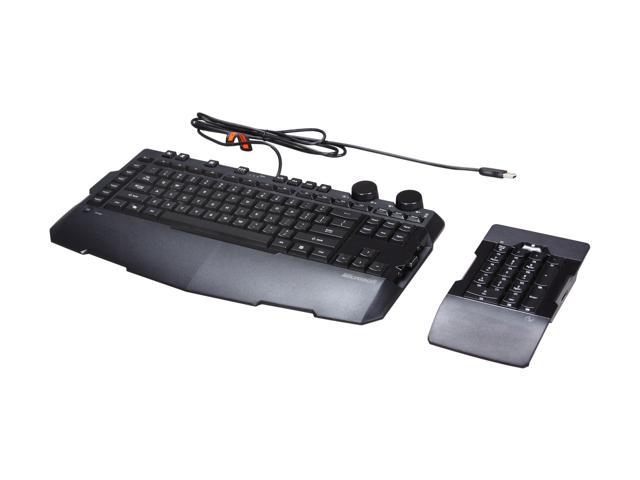 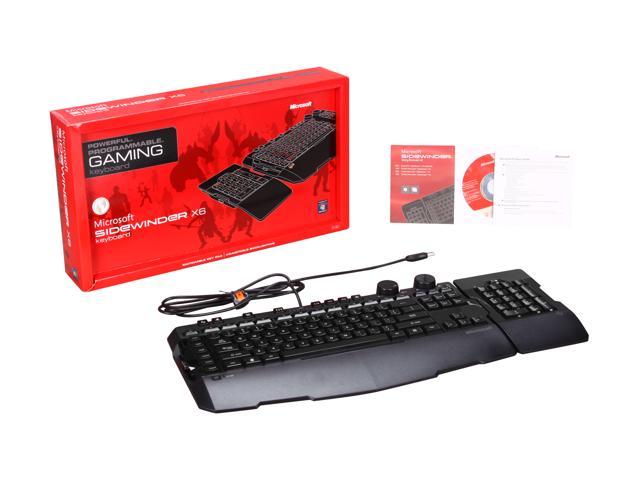 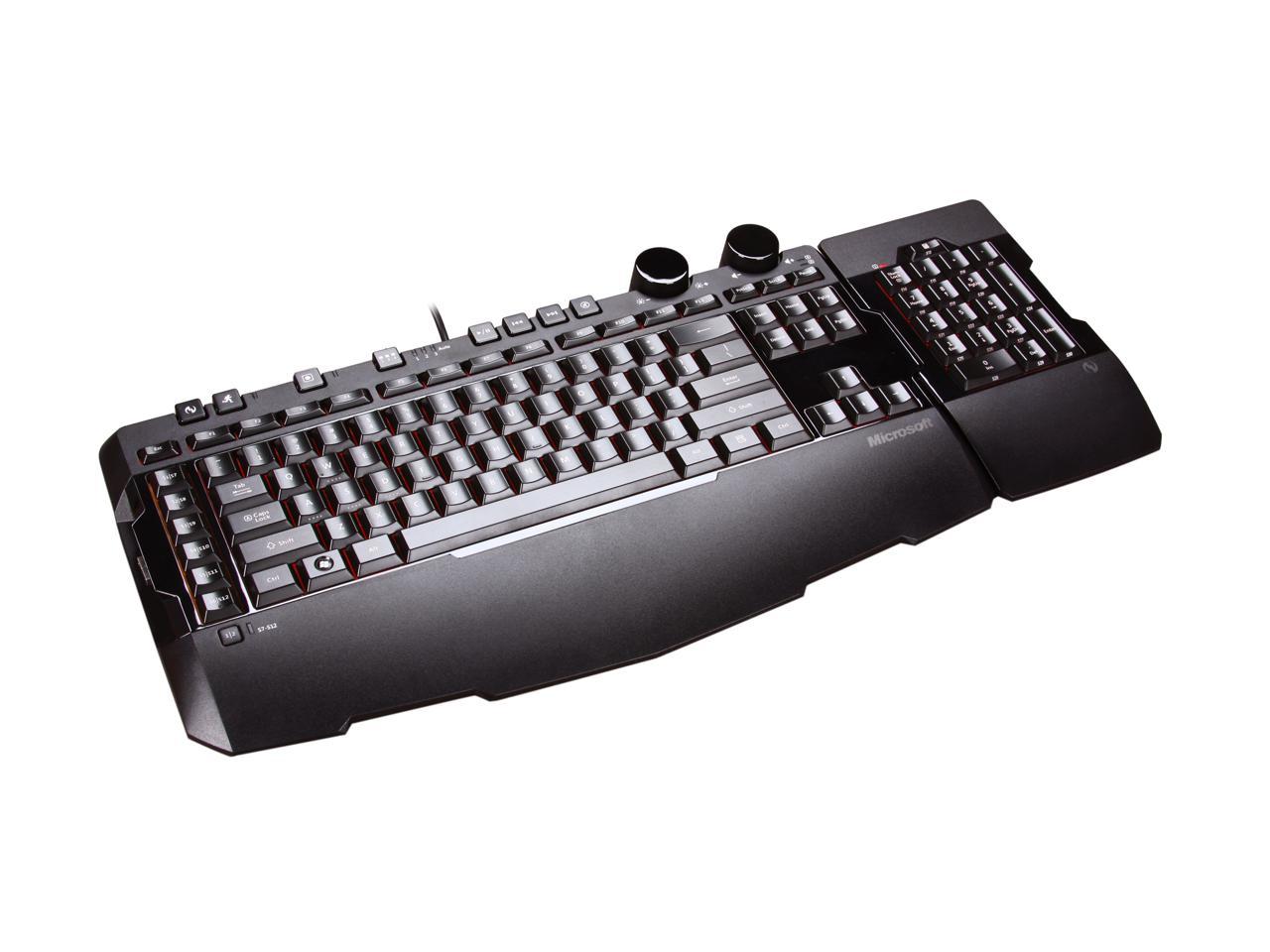 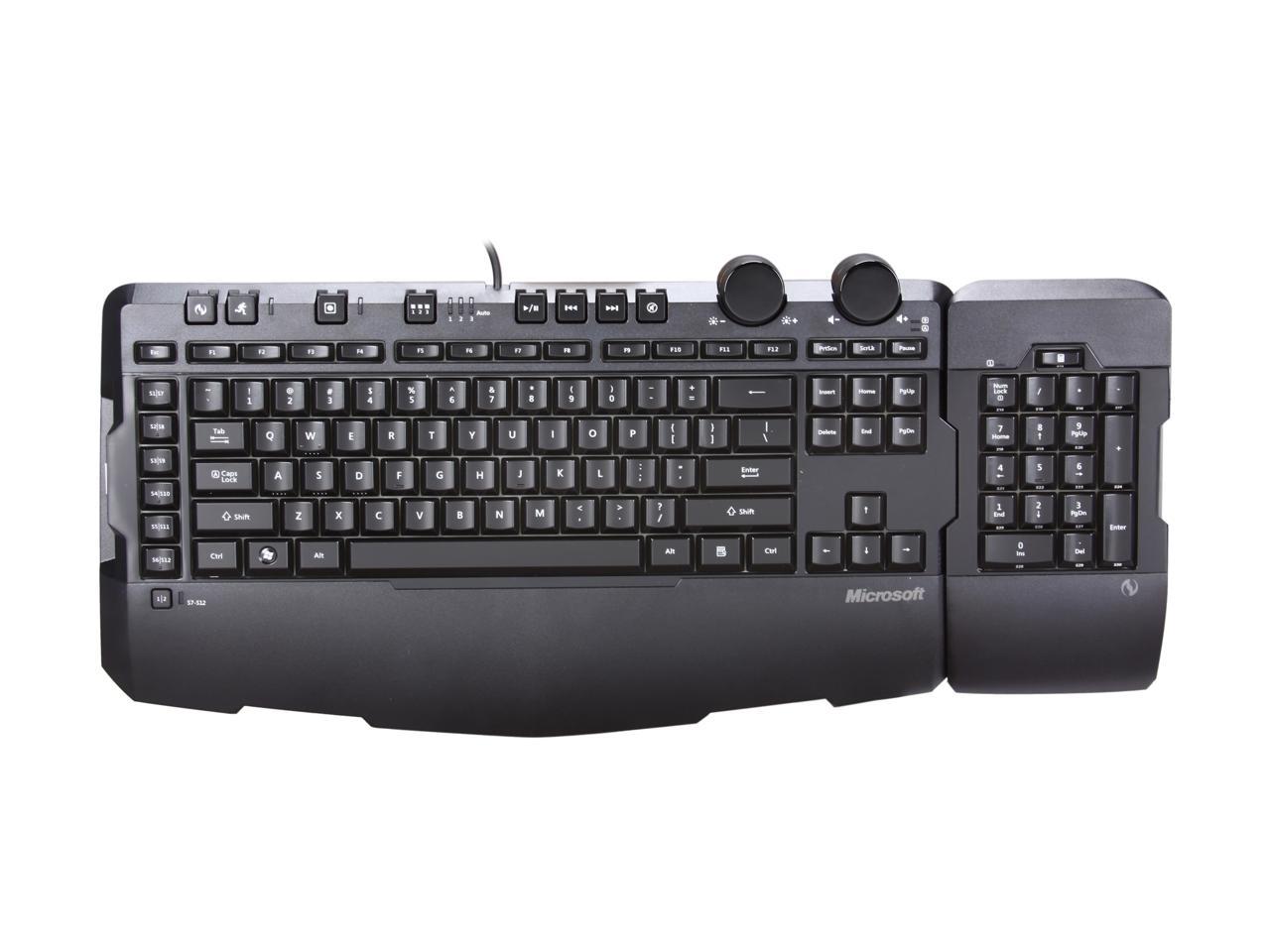 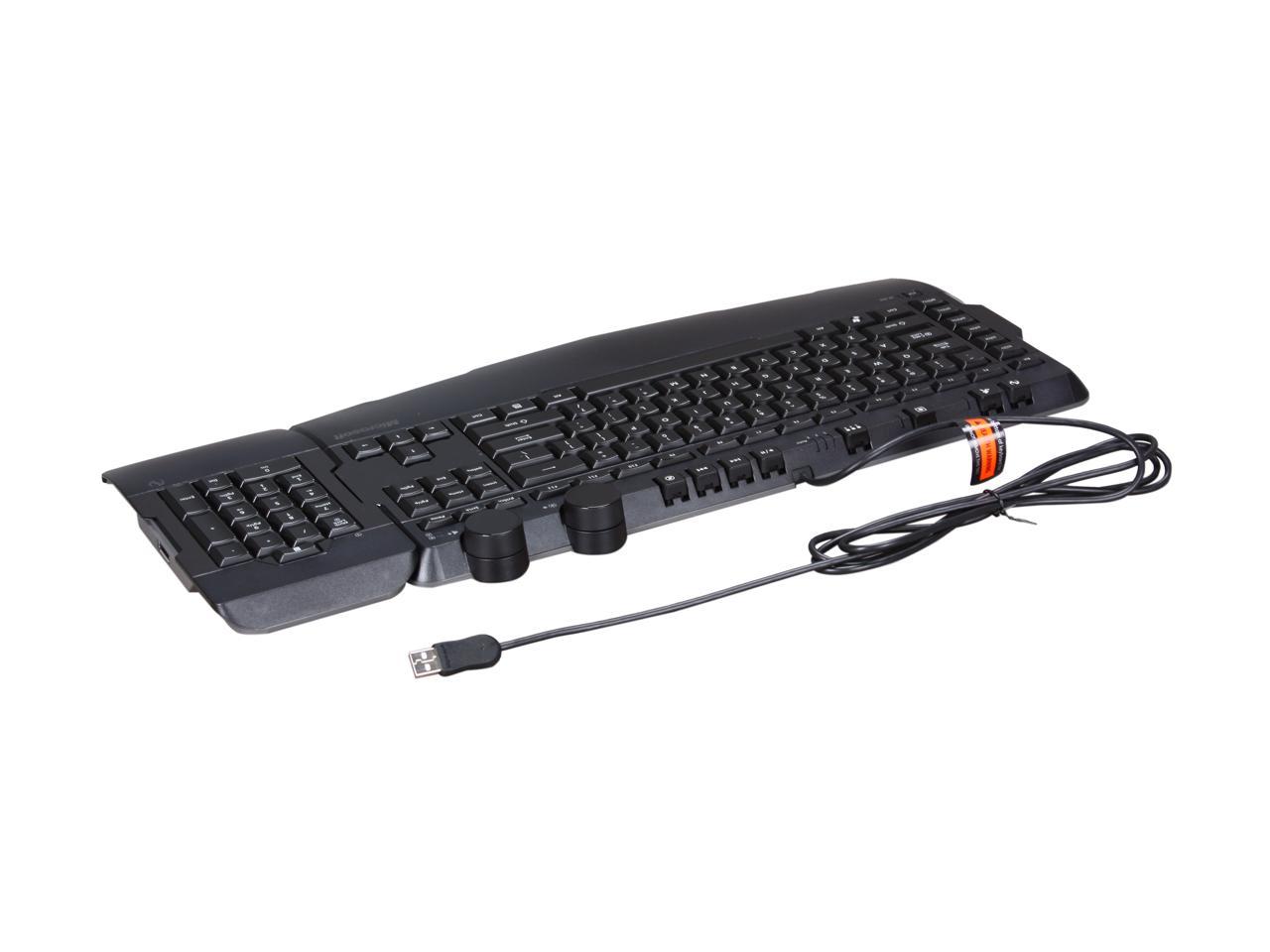 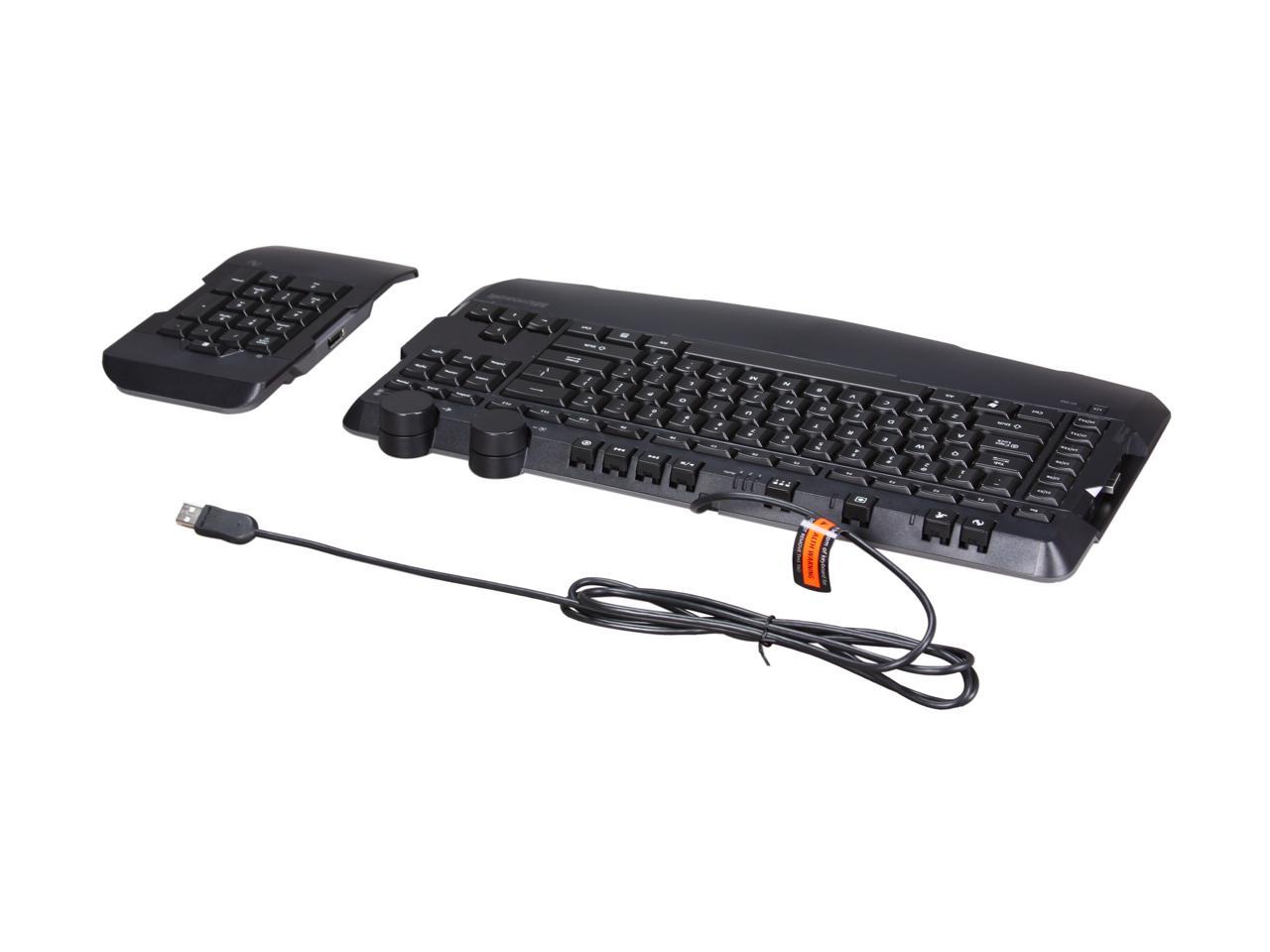 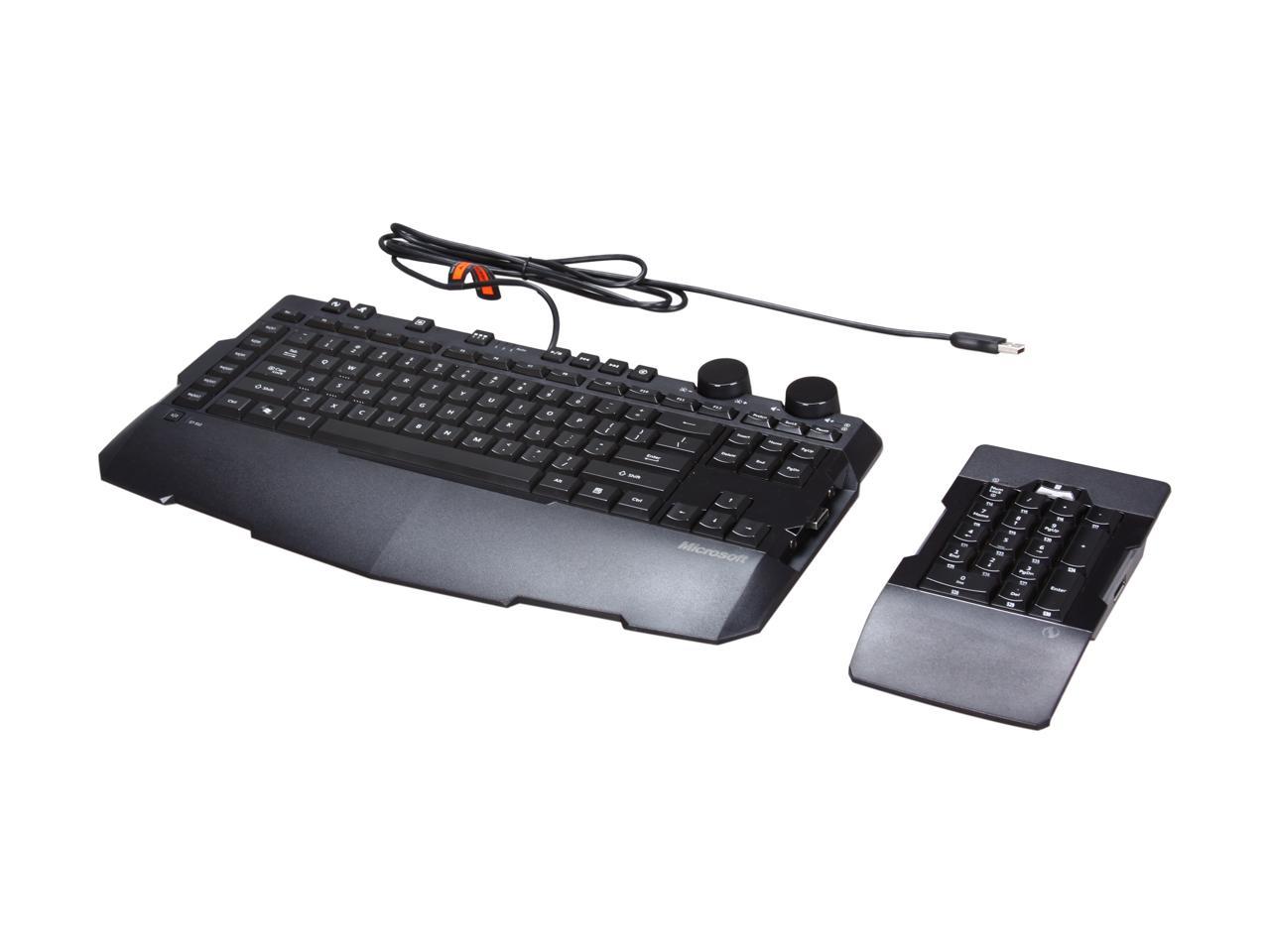 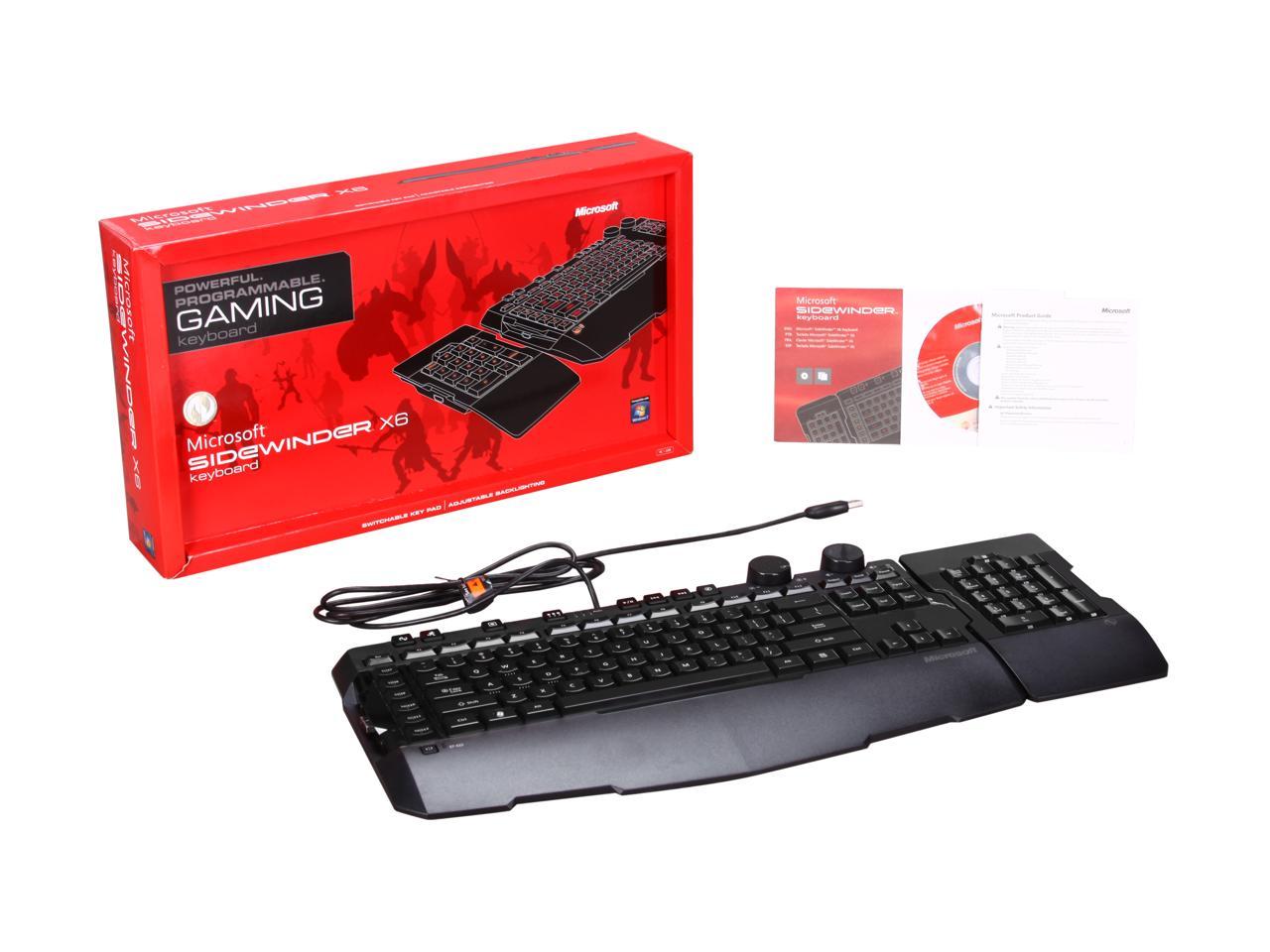 (204) Write a Review
OUT OF STOCK.
Overview
Specs
Reviews
Use the included software to assign games and applications to the keyboard, and when you activate that application in the future, the keyboard will automatically detect it and switch to the custom profile you created for it. The macro feature lets you assign up to 90 functions, using 30 macro keys to automate your most commonly-used commands. The in-game macro record button lets you create macros on the fly.
There's nothing better than a SideWinder to help you destroy your enemies!

Pros: First I want to say Newegg is the greatest! I ordered and received my items in 1 day. Ordered Monday early and received Tuesday. Thanks for the great service. Now to the keyboard. It looks great. Everything works and there is no lag or ghosting with rapid use of multiple keys. I play FPS and WOW/Guild Wars games. They keys have a good feel with a bit of crispness. There are 3 mapping schemes available as well as the standard key layout. You can set 3 game layouts and switch between each when you want. The numeric pad can be put on either side of the main board. this was a major attraction for me. I use my right hand for the mouse and now I cam program the keypad for in game left hand use. Also when is standard mode it is much easier for me to use the numeric portion with it on the left when working in spreadsheets and Quicken. Now I will wait to see how it holds up. I have older keyboards that are many years old and still work. I hope this one proves to be as long lived.

Cons: There is no way to elevate or tilt the angle of the keyboard. I prefer a slight raise to the top edge. There are what appear to be holes on the underside that could accept round posts type legs but none are provided. I solved the issue by putting a strip foam type weatherstripping under the edge. Now I am comfortable with the angle. The keys are just a bit cramped for my hands. I am used to a wider spacing between them. i am ajusting to the new layout and this is not a major issue.

Overall Review: I have not had any other gaming keyboards to compare this one to. I did try a few in store and can say this one seems to be a best fit for me. I think the choice of keyboard is very personal. We all have different size and proportion hands. As I noted above the only open issue for me is to see if this device will stand up over time.

Pros: Having both a dial for LED lighting and a dial for volume is what sold me on this board. Detachable numpad is icing on the cake, and included software makes it very easy to customize keyboard functions. For instance, the keyboard supports three profiles. There are three LED lights on the top of the board to show which profile is selected, with a button to cycle through them. The stock second profile disables keys which can accidentally take you out of a game. I have not explored the macros at all yet (and may never need to - like I said, bought it for the dials), but from what I've seen so far I'm sure I'd be happy.

Cons: None. Took a while to adjust to where my fingers needed to be due to the extra macro keys on the left, but that's to be expected.

Cons: Even after over a month, I'm still accidently hitting the caps lock key when typing; it's placement is a little too close to the 'a' key.

Overall Review: I use this mainly for FPS gaming for which it serves its purpose well. I have not tried setting up macros or using any of the other bells and whistles.

Pros: i really love the aesthetic, looks really cool, especially in the dark. back lighting is very even, except in the letters of the PrtScn/ScrLk buttons where it is somewhat faded, although this might just be in the board i got. brightness knob is analog, so you can get a very nice gradient of light anywhere from off to full. the keys plastic texture feels nice and the keys themselves are nice to press. travel distance is between that of a laptop keyboard and a standard keyboard. keys are easy to press. response is perfect. the software is needed for configuring the advanced features of the keyboard. it has a ton of features but i haven't touched any of it.

Cons: the esc key not being over the ` is a big throw off, i've hit F1 instead of esc many times.

Overall Review: i really wish keyboard makers would align the function keys with the number keys instead of staggering them in groups of 4... how much more intuitive would that be to operate? what's the deal? also i don't like how the two knobs protrude out and up higher over the height of the keys. maybe it helps if you have chip grease or zit juice all over your fingers, but i wouldn't know... using with the numpad on the left takes some time to get used to. i have no need for any of the advanced features. i just needed a cheap back lit keyboard. in conclusion, best keyboard i have ever used.

Pros: It has loads of features and it's quite comfortable. Like others have said it doesn't have a removeable handrest or a clip at the bottom to raise the board. The lights are just amazing. The keyboard could have been without the extra macros for it makes the keyboard slightly larger, but it does indeed have a remvoeable number pad that I will have to learn to live without (or pull out my keyboard number pad) for my desk keyboard tray is too small. I have not had any problems using it on crysis, css, or any other half life games, although I had not tried the macros, but im sure they work. It was a good price even without the combo deal, I would buy it again for a client build.

Pros: I have been eyeing this keyboard for a few weeks. Once it went on sale I decided to just go for it and I couldn't be happier. The backlight is superb, the layout and design are both functional and stylish, and the keys themselves are just very very fun to type on. After using a stock Thinkpad keyboard for quite some time this is a change that is easy to switch between. After having it shipped to my door in 3 days at an excellent price point you would be crazy not to buy it. After my friend saw it he immediately bought one for himself. : )

Cons: Not alot really. the size and removable keypad take some getting used to. Occasionally, some of the "media keys" lag when used/spun however this may be the fault of the ancient laptop it is running on.

Overall Review: This review was written on the Sidewinder x6. I am a very satisfied customer.

Pros: -Extremely durable, even in very dusty conditions -Analog backlight adjustment for every light level -Medium throw keys that aren't excessively loud -Heavy use has not caused key paint to wear down at all -Detachable keypad for small desks or left handed people -Key sizes and layout are ideal for gaming or people with large hands/fingers -Long cord, red lighting, very solid construction

Cons: -No keyboard feet. (Seriously MS?) -Location of F1 key is where ESC is on most keyboards, inadvertently hitting this key more often than I should - Media keys don't respond well in Winamp, OSD has a significant delay(although is is likely due to software)

Overall Review: Bought this over a year ago to replace my trusty old Saitek Eclipse in my office. I work in a computer repair shop so I get about 1200 computers worth of dust a year and this keyboard hasn't had a single hiccup from that. I've spilled black coffee into it, and even had an 80lb Alienware dropped on it. The keyboard is still fully functional and still looks amazing(with the exception of some scrapes on the glossy finish). I type dozens of pages of documentation a week so it's getting plenty of use and frustration in the form of hulk smashes are nothing to this thing. Only reason for 4 eggs is the lack of keyboard feet, but I went out to a local store and bought adhesive laptop feet and they work perfectly. I can do nothing but praise this keyboard, especially for the price and what horrors mine goes through. MS hardware has really stepped up their game and this is proof.

Pros: Ive only made it 4 stars because the buttons colors wore down on me, the keys sitll function perfectly, but takes away from the cool facter. other than that, perkect keyboard, amazing on the wrist, perfect for those who are worried about damaging their wrists or already have problems, no need for padding or anything, the button extends much further than most mouses, and is not removable, but is veyr good for your wrist, i woudln't take it off if i could. it doesn't stand up, whitch could be looked at as a con, but its designed your health, not for lazy people, getting used to sitting keyboard isn't hard. it's much like a laptop.

Cons: the buttons wore, the funtions buttons dont work with out drivers, but most the media buttons work.

Overall Review: the macro software is incredble, you can program it to the nano second, I wrote a few extreamly complex macros for world of warcraft to test them out, they work very well, and have endless posabilitys, but they only do as you tell them. their are 3 dif programable set ups, along with a switch for another 6 keys, the 6 macro keys act as 2 each, when switched the 1st key acts as the 7th key, so on and so forth.