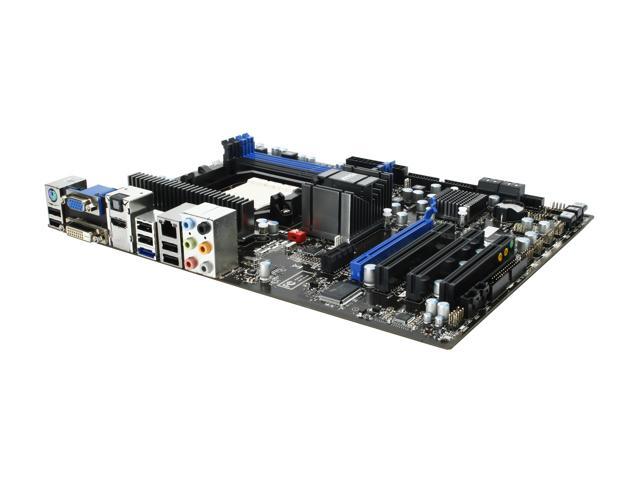 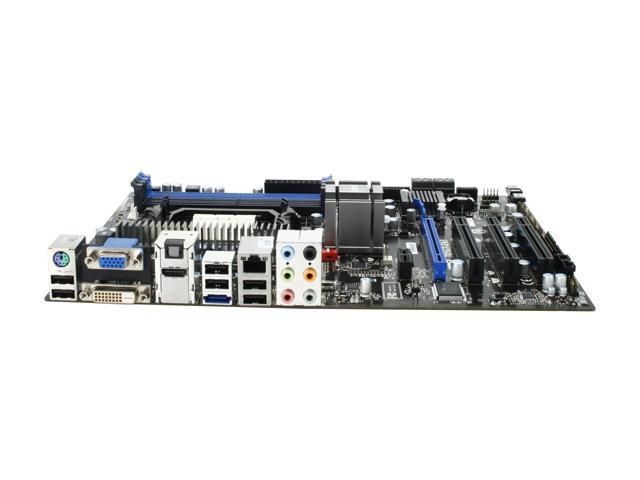 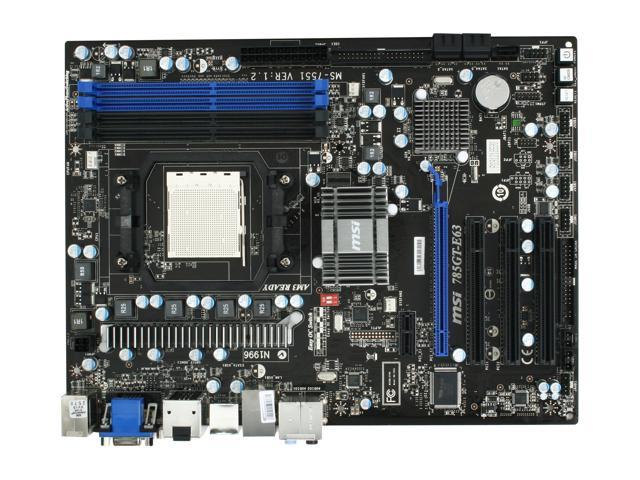 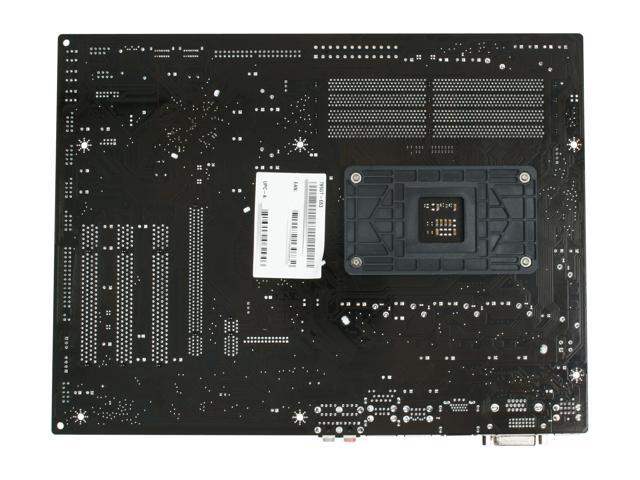 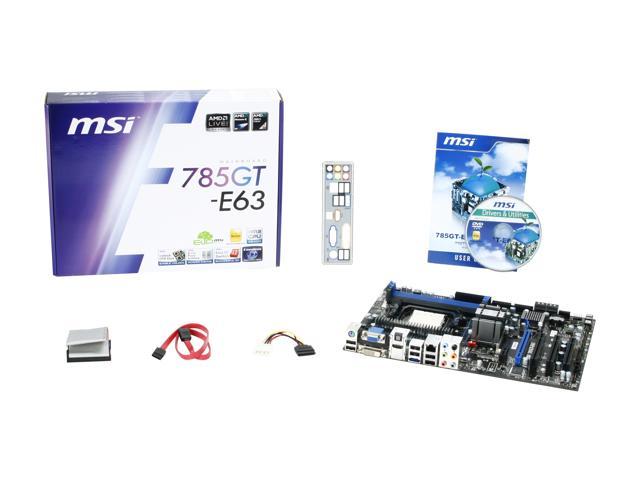 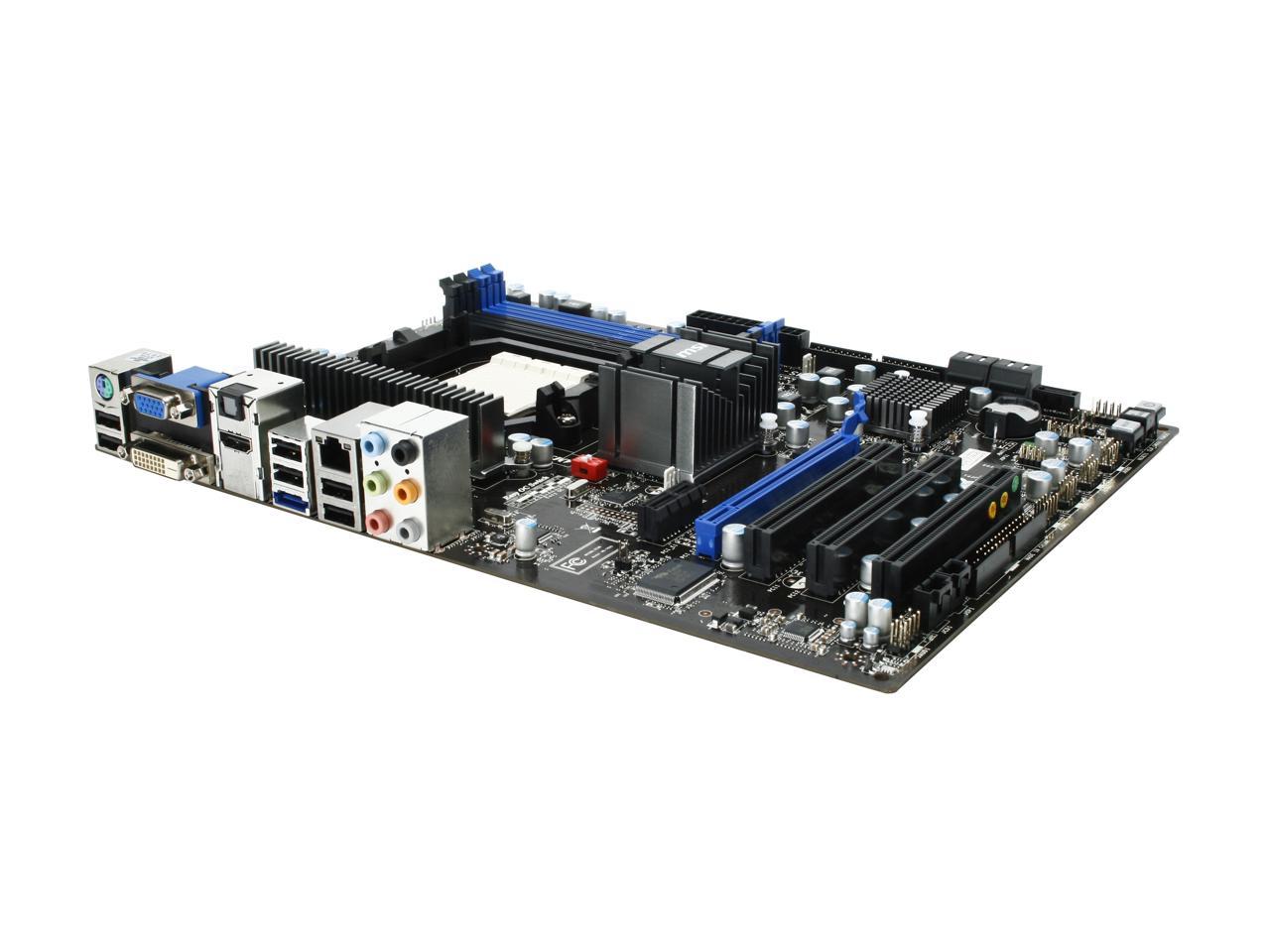 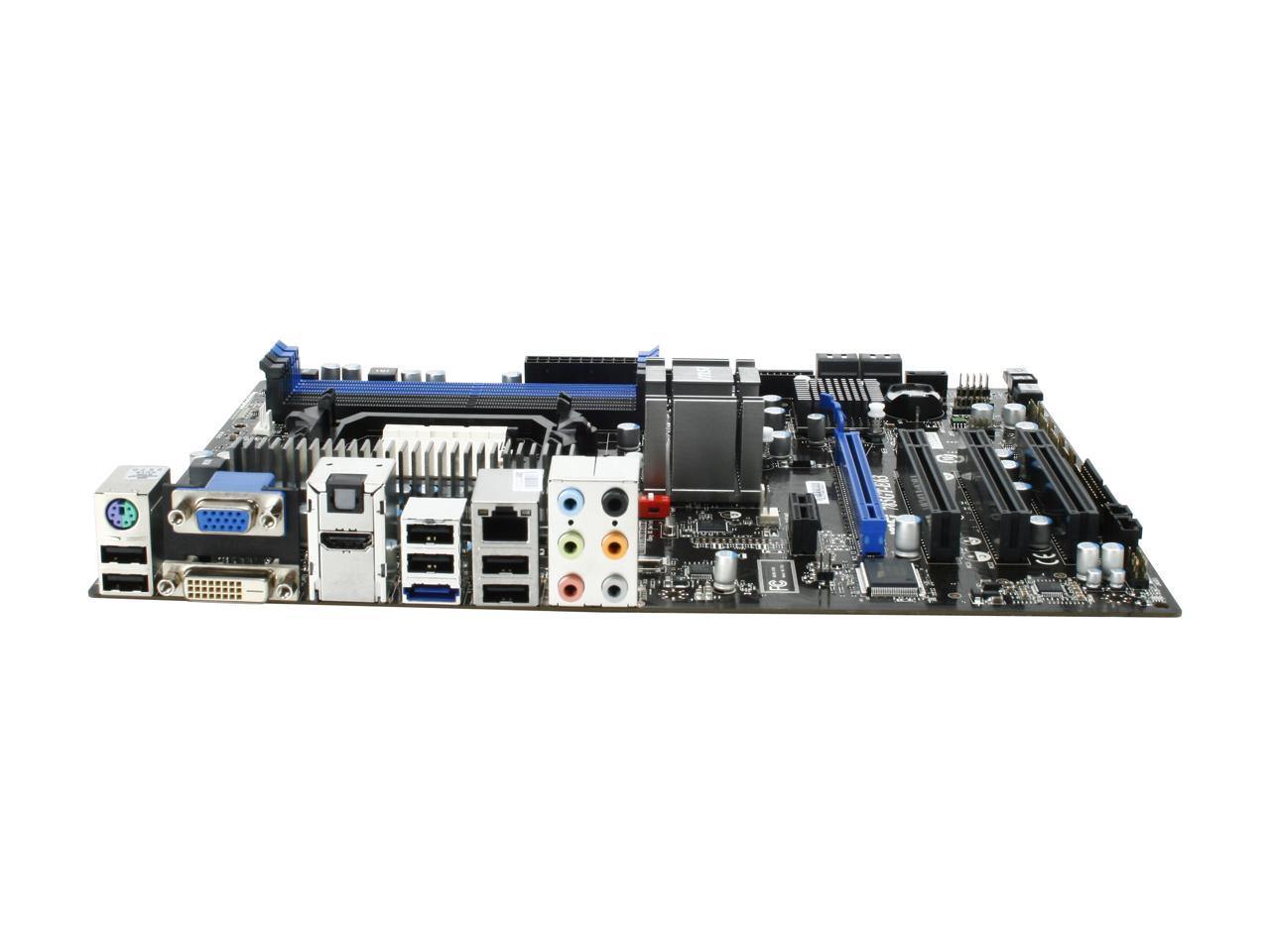 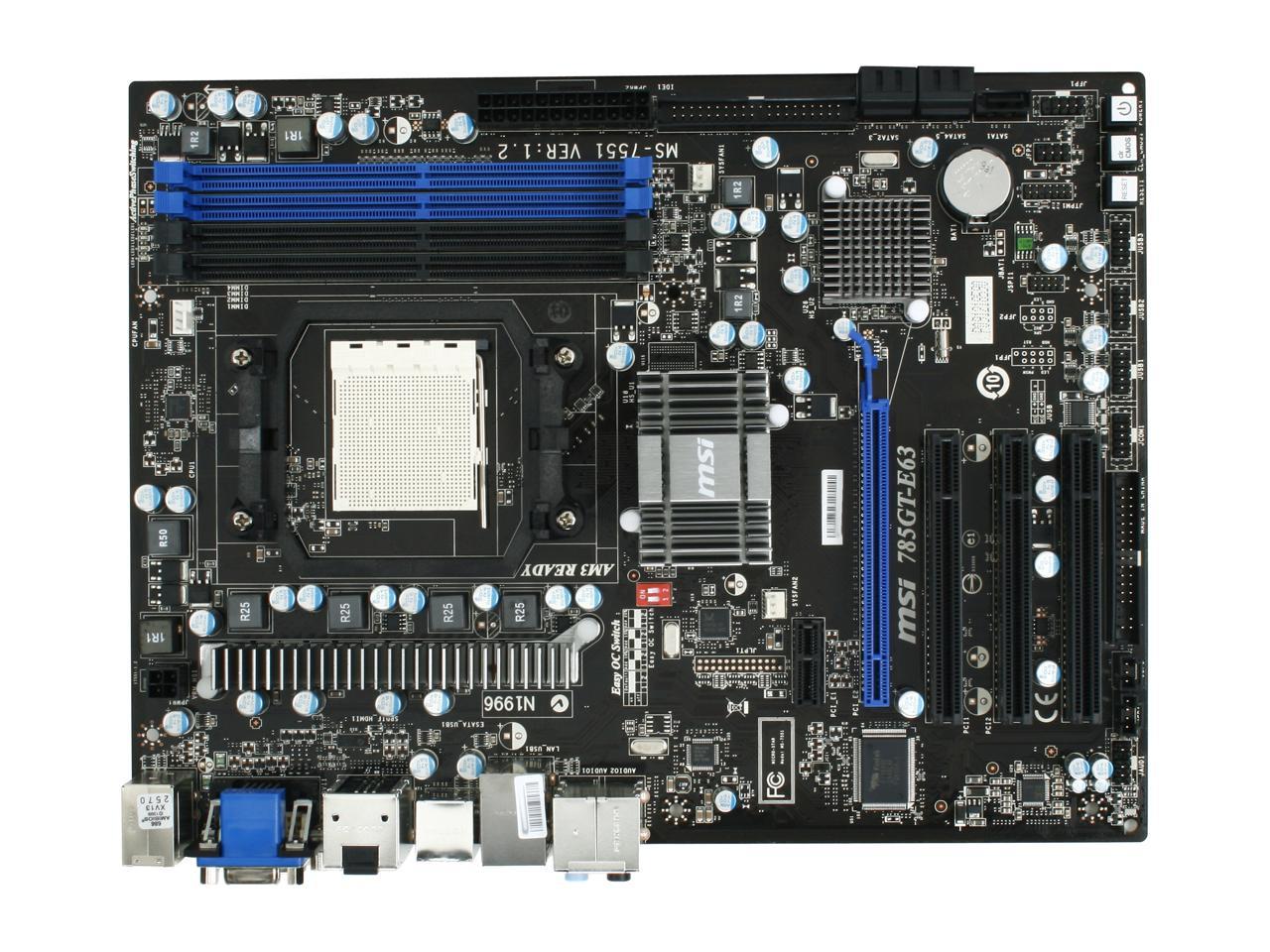 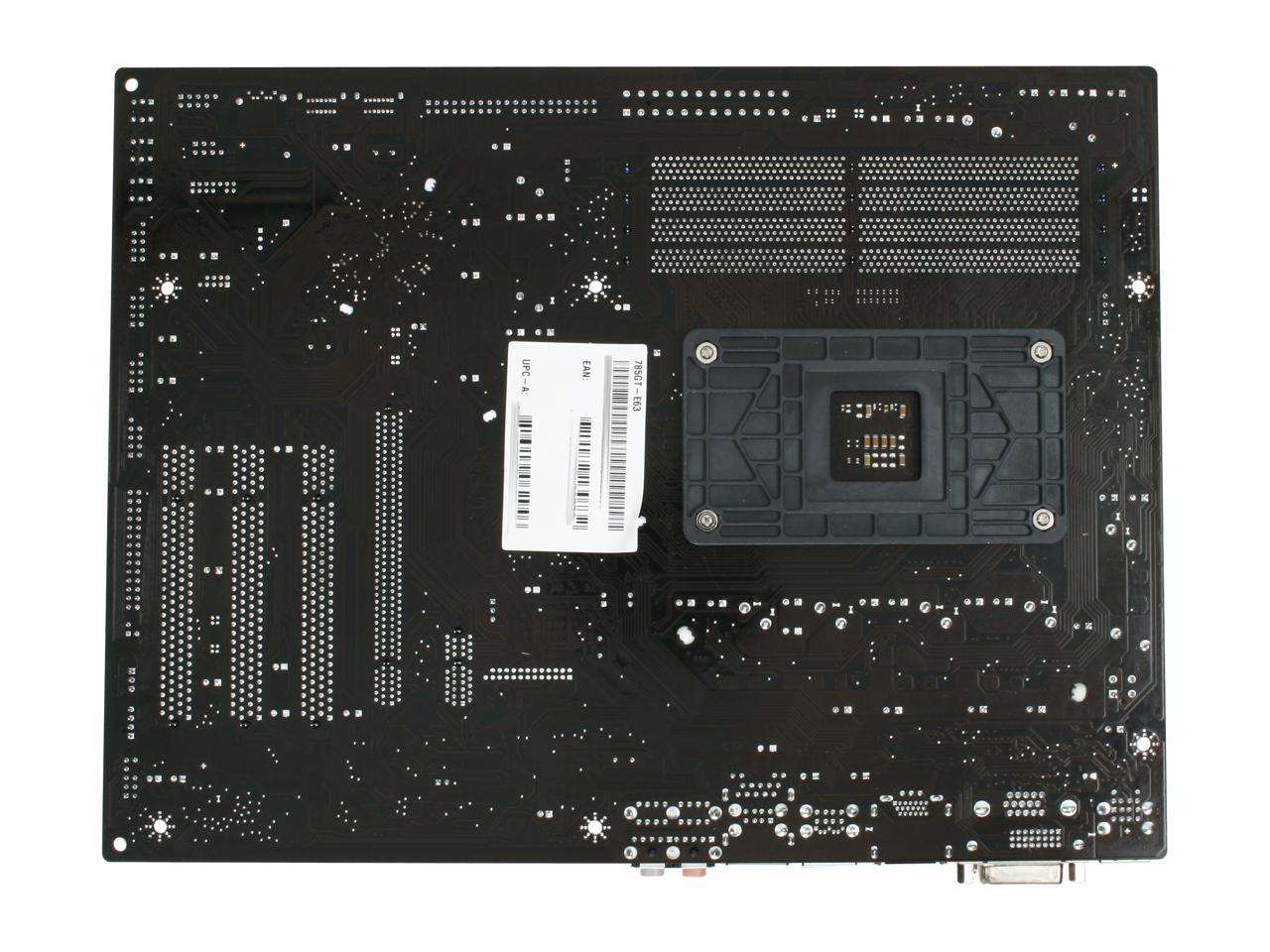 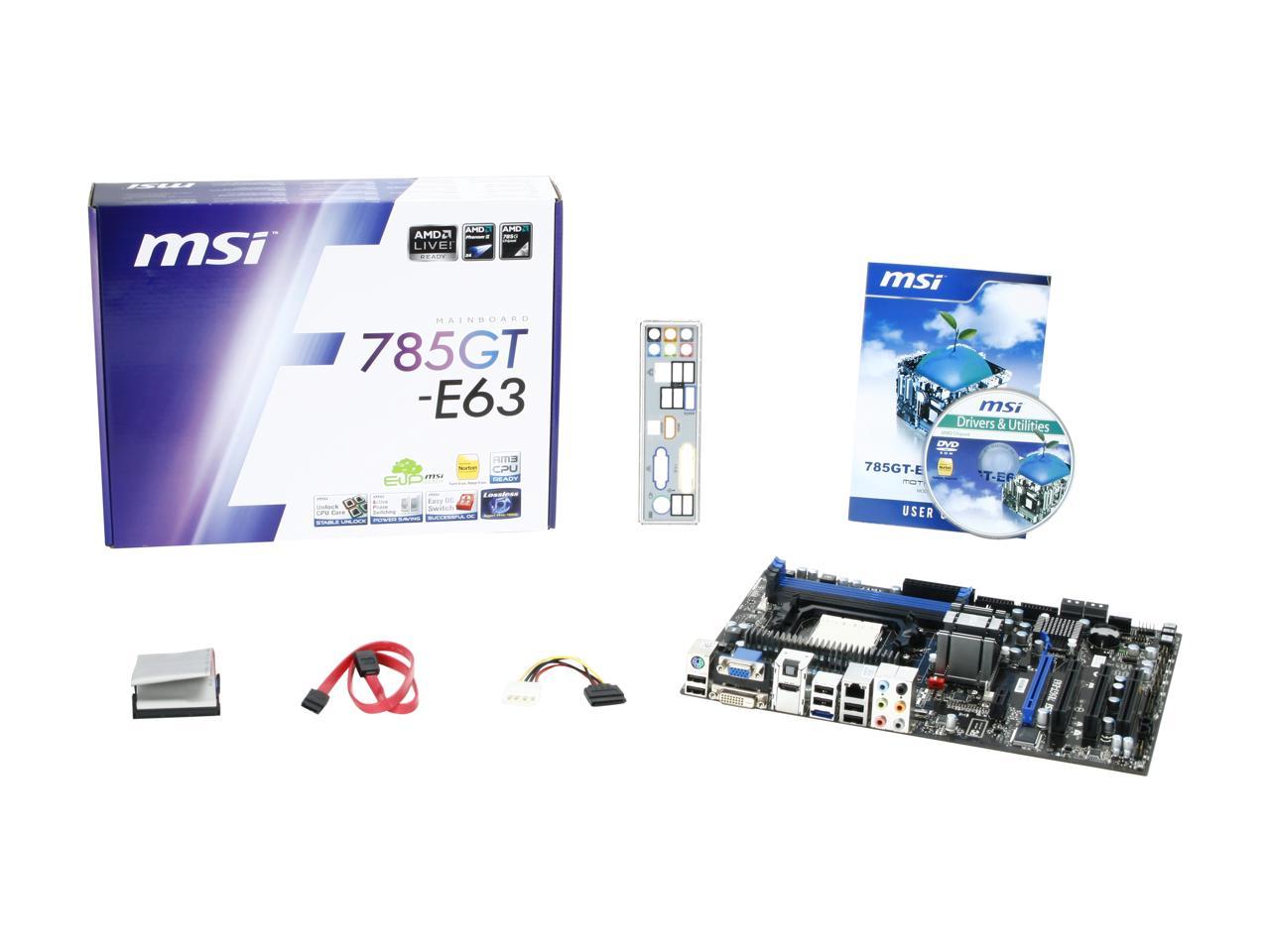 (118) Write a Review
OUT OF STOCK.
Overview
Specs
Reviews
Get affordable graphics and computing performance with MSI 785GT-E63 motherboard. Based on AMD's 785G chipset, this ATX form-factor board is designed to support the latest AM3 Phenom II processors.
Dominate your applications and games with up to 16GB of DDR2 memory fitting into four 240-pin slots with dual channel support and 2600 MHz Hyper Transport technology for increased performance. Onboard Gigabit Ethernet LAN means that you can connect to other networked devices without running into a bottleneck.
The integrated ATI Radeon HD 4200 chipset can be augmented with one PCI Express 2.0 x16 graphics card to achieve high visual performance at a fraction of the price. Video can be output through the DVI, D-Sub or HDMI ports and accompanied by eight channels of sound from the High-End audio chipset. Five 3Gb/s SATA connectors give you the ability to store massive amounts of data locally with several RAID configurations possible for extra security and high-speed performance. Six USB 2.0 ports give you additional options in connecting and expanding your system.

Pros: Stable, easy setup, excellent layout. AMD Overdrive I would highly recommend for setting an 'overclocking starting point', you click, let it go for awhile, reboot if necessary, and you have your starting OC for further testing if need be. This motherboard replaced an older Aus board (that failed after a year, no more SATA recognition) with an NVidia chipset and I'd recommend the AMD chipset hands-down (as Overdrive is included with that). For a starter or an overclocker, excellent board either way.

Cons: Won't make my coffee for me.

Overall Review: I'm shocked with this board. It's a less expensive board, but so far has proven very stable, easy to tweak, you can see alot of thought went into the layout, and it's packed with features. MSI, every product I've bought of theirs so far so far, has proven to be a winner.

Pros: The on board HDMI and optical actually sound great, and look awesome, can watch HD movies FLAWLESSLY, and play most games on the onboard video/sound, its pretty nice. TONS of OC options, and really, just a nice board overall, if you are looking for a cheaper system to do MILD gaming with, and something that will make a good cheap media center, this is the board for you.

Pros: #1 Pro is that it booted my win7x64 from my old board immediately with 0 issues. Old board was completely different chipset (asus m2n32-sli wireless edition). The easy oc switch works great, set it to 20% oc and it has my phenom x4 9850be running at 3ghz like i had manually set on my last board. After doing alot of searching to replace my dead one, this is the only one I could find that would take am2 and am3 cpus, uses ddr2 with 4 slots so I could use my same 8gigs that i had, is full atx size, had digital audio out, and on board video wit hdmi in case i need a backup video source. I am truly pleased.

Overall Review: After reading the other reviews and saw that 2 other people were able to boot up their existing windows installations with this board I decided I would give it a shot even though I was skeptical but it booted right up, installed the latest drivers and bios and have no problems. I did have to reinstall geforce drivers for vid card. My heatsink (zalman CNPS9700-NT) fits but you couldnt slide a piece of paper between it and the ram, My ram has built in cooling fins that make it about double the height, but I thought it may help someone to know that in advance who may have a larger cooler, it is a tight fit. There are 4 blue leds above the ram that are pretty bright. The built in power/reset/clear cmos buttons are a nice feature.

Pros: I have never purchased a MSI motherboard before so I was not sure what to expect. I was looking for the core unlock feature and it worked fine. This was for my own system not a clients so I was picky about what I wanted and it did everything I needed. I have a 3 monitor setup no issue with my video card. I saved money on the processor and still got a 4 core out of a Phenom 2x

Overall Review: I don't know if I am lucky or what but I have shopped here a long time and I have not had any issue that I could not solve on my own. Studying helps reading reviews is a must. Work on the front end save time on the back end. These reviews are a must so help out talk about your own experiences this and other products.

Pros: NIce layout,front connecters usb all on bottom of board.Fired right up,unlocked my x2 550 to quad fast and easy.

Cons: ram slots are really close to cpu my ac freezer covers first 2 ram slots, many non stock coolers are going to have trouble with this board.System fans could be located better.

Overall Review: reducing the width of the board gives better access to sata ports but covering up 2 ram slots isnt a good idea,I normally add only one stick to first boot up board. that was not an option here,it worked but could be an issue for some.Like i said great layout of the board just be aware of ram slot issue

Pros: Its a great board i gotta say.. did a fresh install of 7 on a new hdd to make it all flawless. its easy to work with and has great for there overclocking choices...

Cons: did fit alil funky in the case but after it was all right so no really cons to this buy

Overall Review: I gotta say for the money i have in my set up its a great computer have the msi 785gt-e63 motherboard with 8gbs of ddr2 1066 gskill ram and a phenom II X4 840 (quad core 3.2gh) and nvidia geforce 7600 gt video card all fit well and this board is great

Pros: Pretty much everything. I love the bios, the layout, all the features. It's very reliable and hasn't disappointed at all. If anything I love this board more now than I did when I first got it.

Cons: Still have yet to find one.

Overall Review: Silly people knock an egg off for this or that. It doesn't make sense. If you wanted a board with vertical sata ports you should have bought a different board. This is a wonderful board and I have yet to find another board in the am2+/am3 area that tops it for features and all. I mean, it even has a vrm heatsink. come on people, you don't buy a Ford then gripe cause it isn't a Mercedes. Don't do that here either.