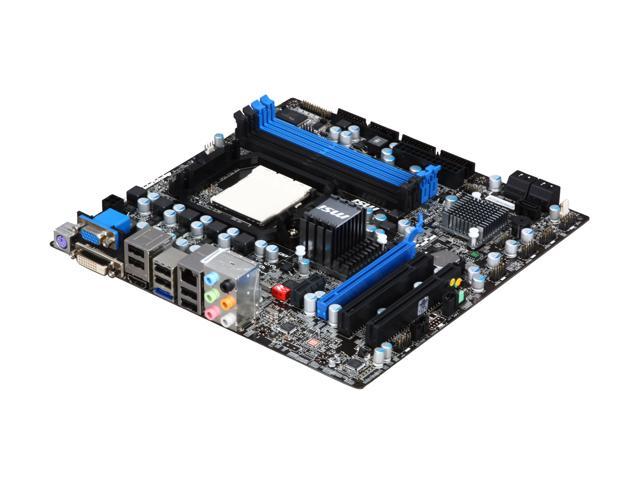 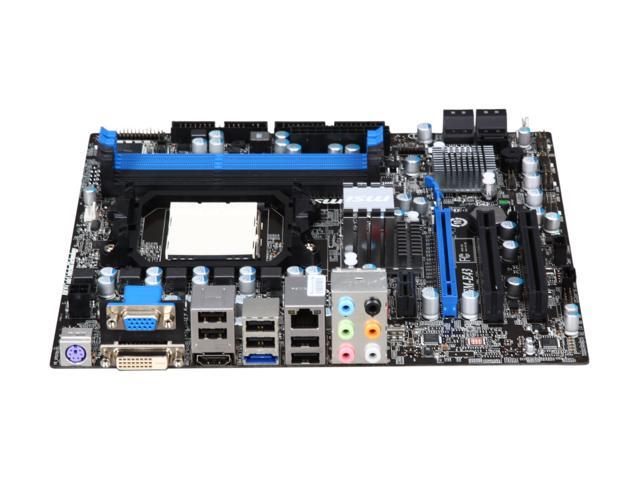 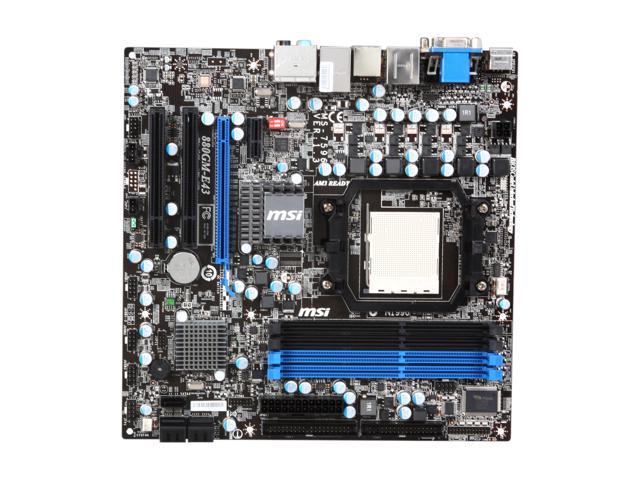 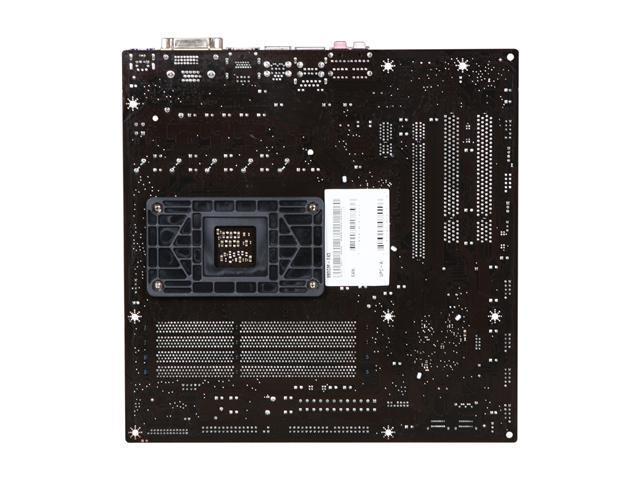 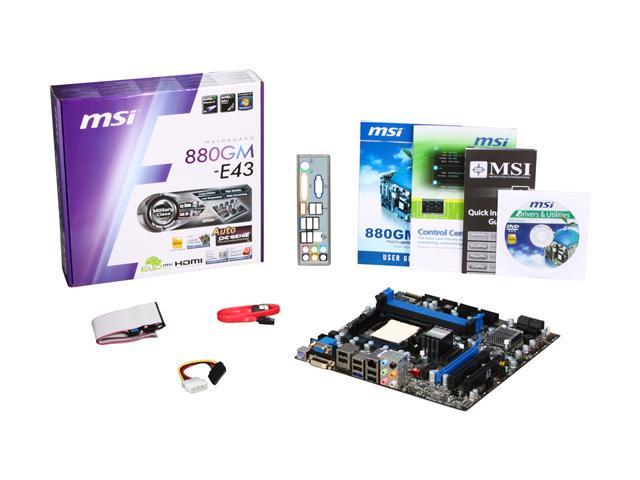 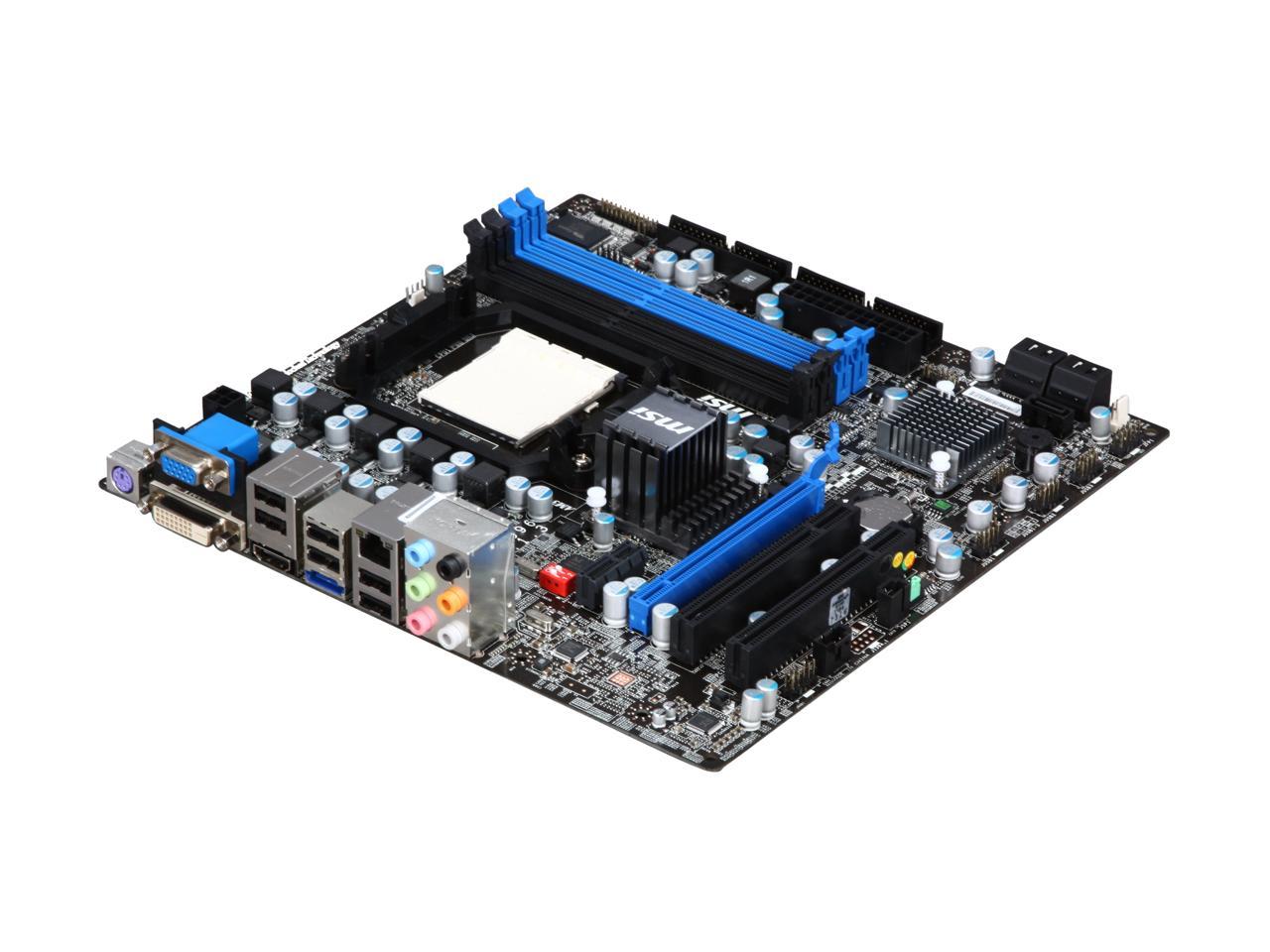 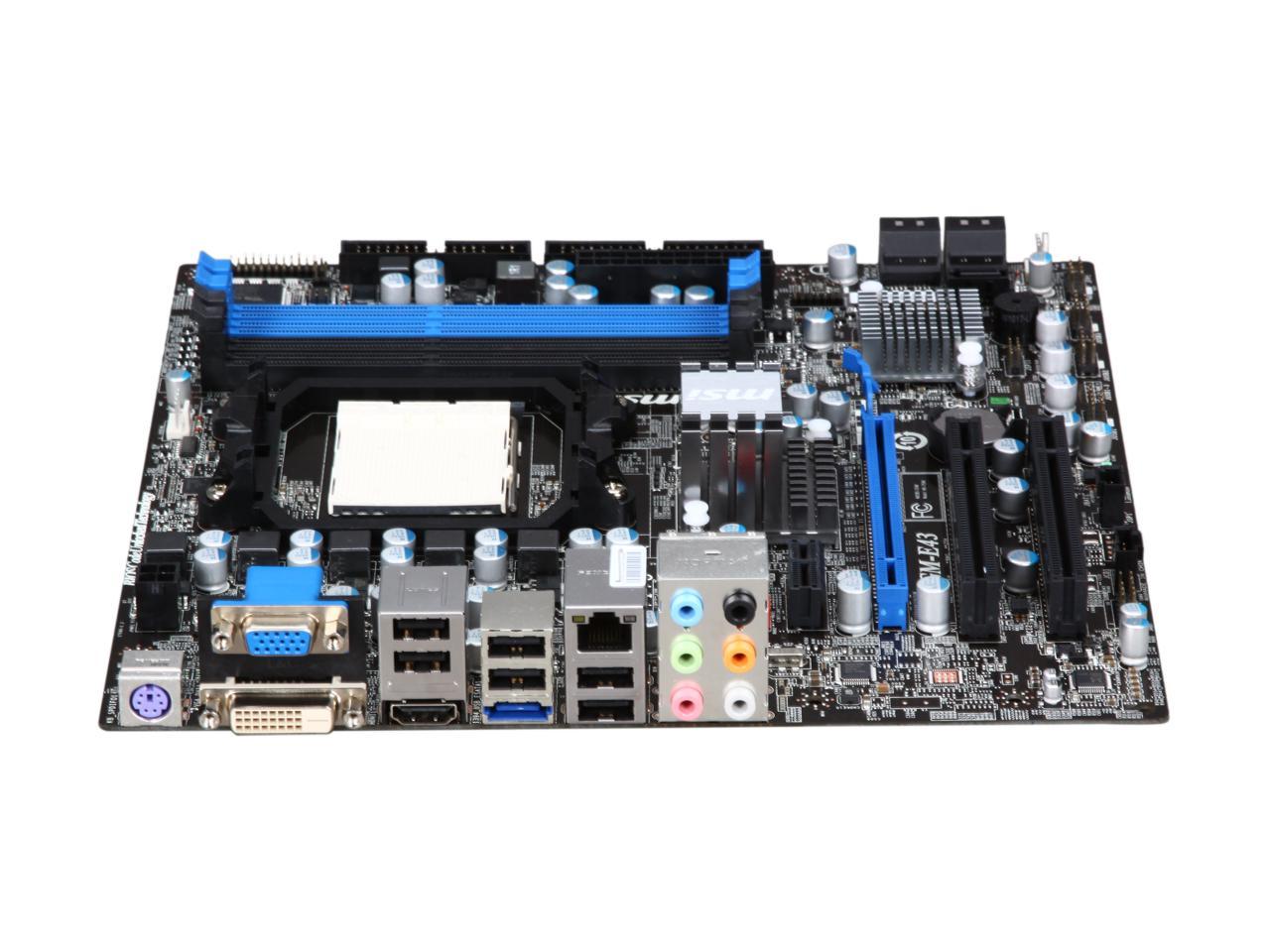 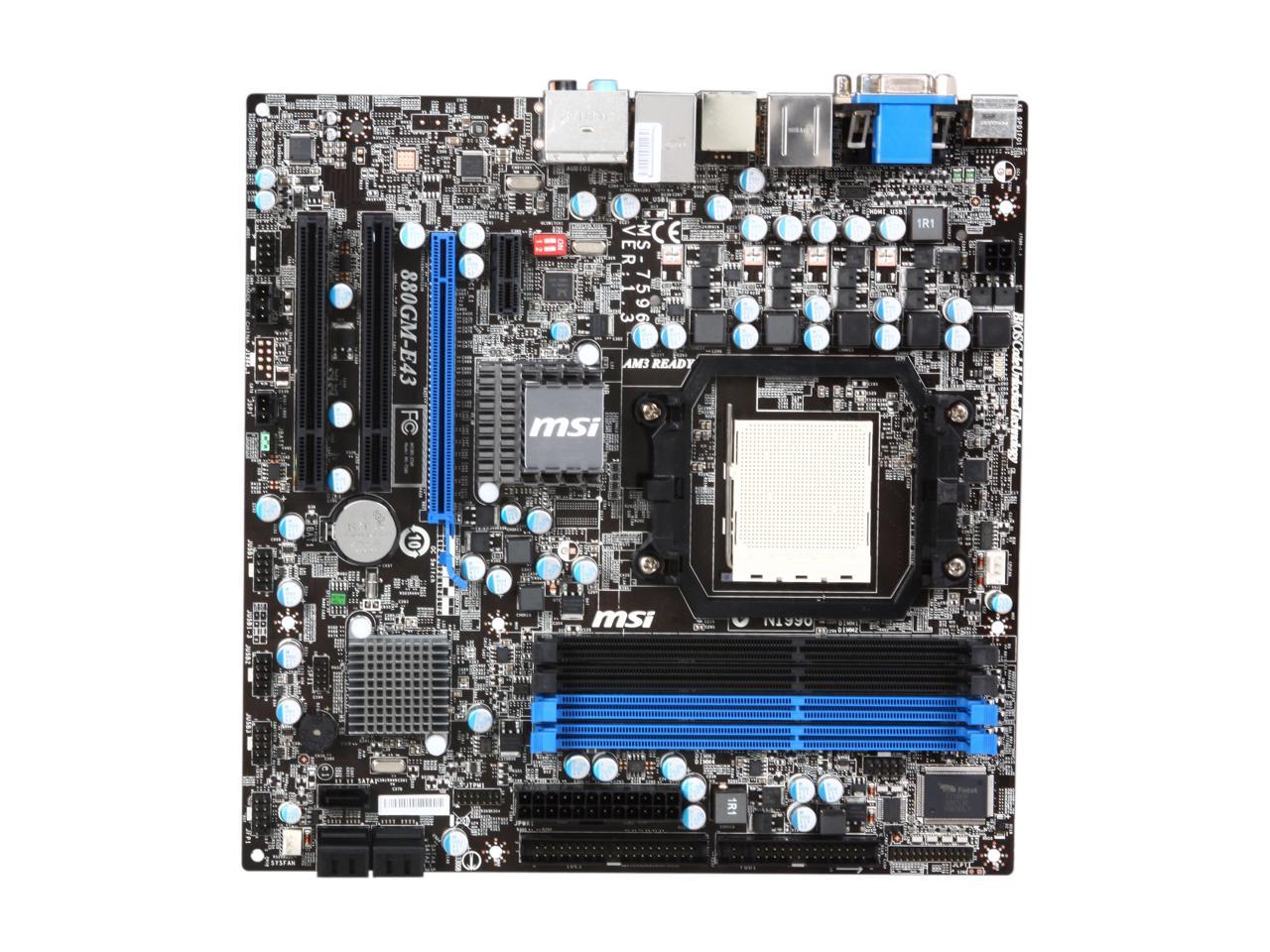 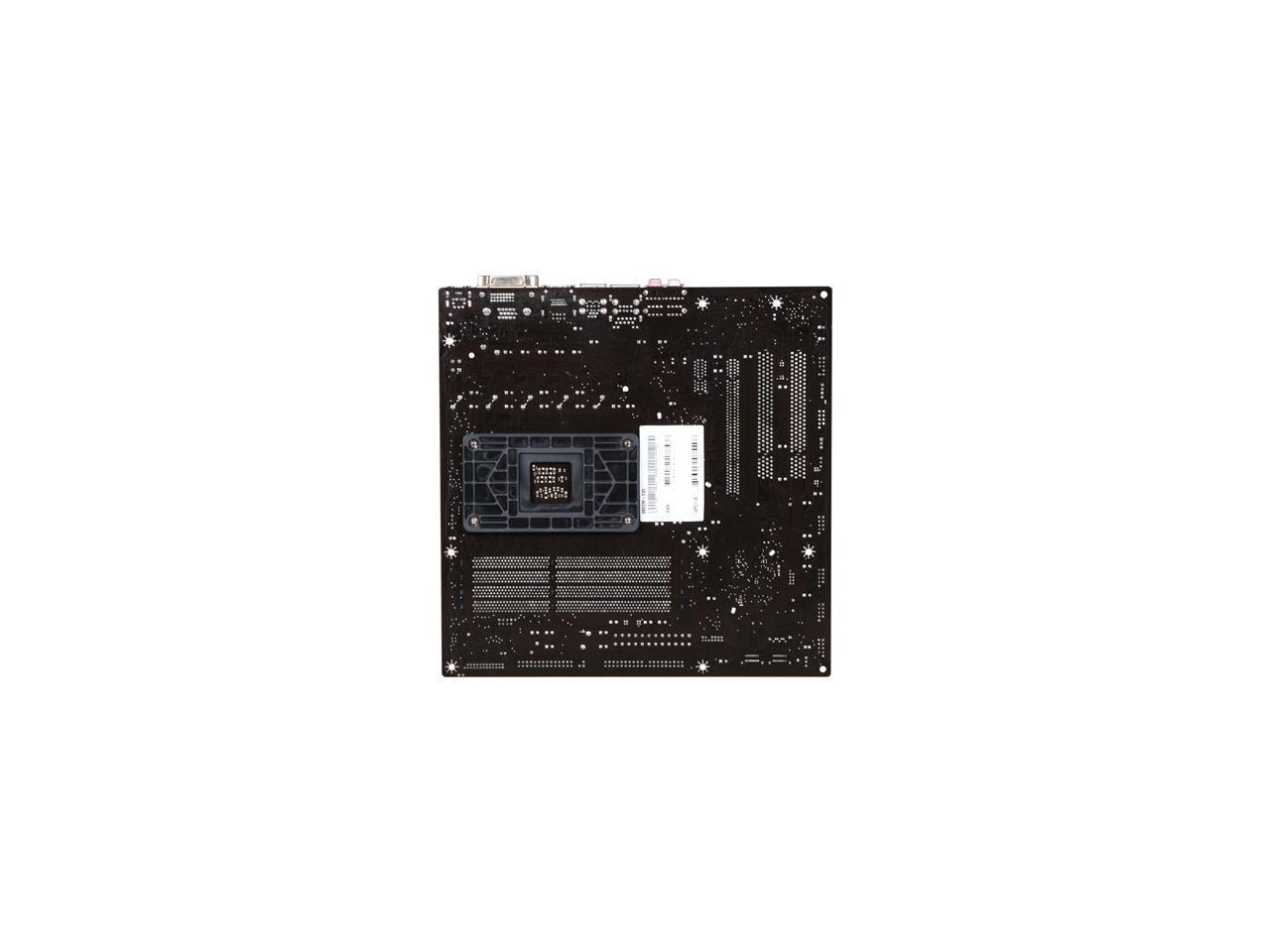 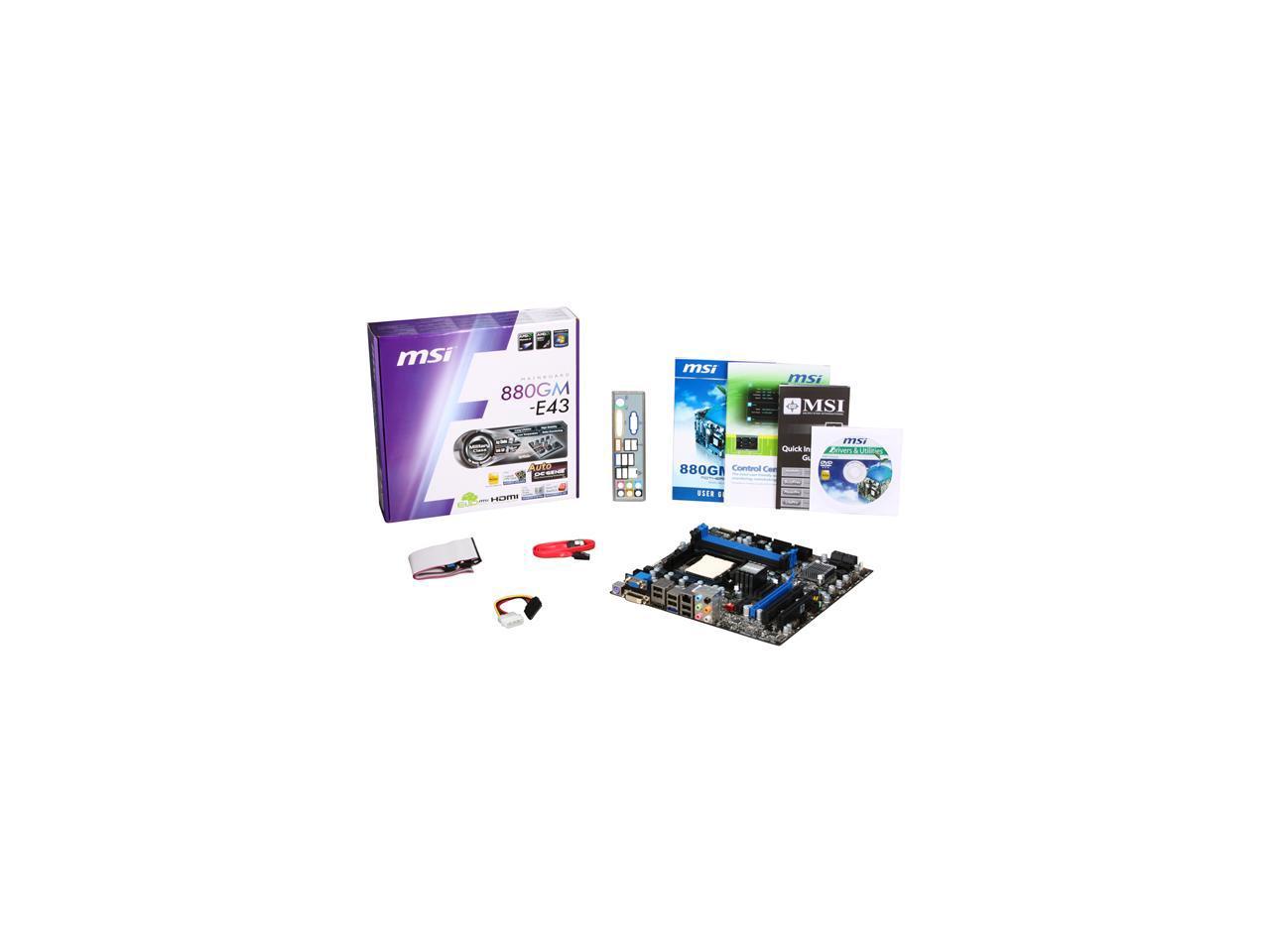 (142) Write a Review
OUT OF STOCK.
LOADING...
Overview
Specs
Reviews
Get affordable graphics and computing performance with MSI's 880GM-E43 motherboard. Based on AMD 880G chipset, this micro-ATX form-factor board is designed to support the latest AM3 Phenom II including X6, Athlon II and Sempron 100 Series processors. With MSI’s OC Genie and Unlock CPU Core technology, you can easily dig the most potential out of your CPU for extra performance.
Dominate your applications and games with up to 16GB of DDR3 memory fitting into four 240-pin slots with dual channel support and overclock up to 1600MHz for increased performance. The integrated ATI Radeon HD 4250 GPU provides adequate 3D and video playback capabilities and if that is not enough for you, simply update your display subsystem with one PCI Express 2.0 x16 graphics card. Onboard lossless 24 bit/192kHz HD audio chipset offers top-level audio quality of extra high fidelity.
Five SATA 3Gb/s connectors give you the ability to store massive amounts of data locally with several RAID configurations possible for extra security and high-speed performance. Count on the reliability and stability offered by MSI's 880GM-E43.

Pros: First build I did. Love the features of this board. I've never overclocked before, but I really like the switch inside, makes overclocking easy for noobs (me). Plenty of overclocking features in the BIOS. 16gb memory supported, always a good thing. Lots of Sata ports. Decent number of USB ports.

Cons: would have liked to have seen more system fan connections

1 out of 1 people found this review helpful. Did you?
Anonymous
Ownership: 1 week to 1 month

Pros: fantastic parts used with long term reliability, nice heat dissipation, and great specs. It's a great budget board to build a standard AMD build for an office or general use computer.

Cons: MSI dropped the ball on this one. I've used 3 of these boards so far and all 3 failed to boot on the first power cycle for some reason. Then after about a 30 second delay, it reboots and takes quite a while again then boots properly or lets you access the BIOS. Some sort of odd first time BIOS setup glitch I guess. The layout is pretty bad. The entire board is really wide for an mATX. It barely fit in 2 of the normal sized cases I used and doesn't leave clearance for a 2nd DVD drive in either. There is no chasis fan hookup, just one "system fan" connector in the bottom right for a hard drive fan. Most cases have a chasis fan but no hard drive fan so you'll find yourself either using a 4 pin molex to 2 pin fan adapter or crossing the fan's cable over the entire board to get to that hookup. Just bad design. Also, the blue LEDs next to the CPU are INSANELY bright! If you don't have a windowed case, you'll feel like you do because light will get out like a laser beam.

Overall Review: If you can put up with forced bad cable routing and first time setup weirdness, this is still far better than the majority of boards out there for speed and reliability. Oh, and you have to be able to put up with blue glow escaping every little gap and hole in your case from those CPU LEDs. There are multiple in a row and the 2nd on keep flashing on and off, I think to indicate the CPU's current multiplier (it turns it down as a power saving feature). It might just be CPU activity it's measuring but either way, your case is going to be glowing and pulsing blue. You might want to consider using any other board than this one.

Did you find this review helpful?
Manufacturer Response:
Dear Valued MSI Customer, We would like to apologize for the issue you have experienced with this particular mb. Please email me directly via usersupport2@msicomputer.com your mb's serial number and your complete contact information, subject heading "EAH880GM-E43". I would like to help you get this resolved. Best Regards, User Support MSI Product Support
Christopher R.
Ownership: 1 month to 1 year
Verified Owner
Don't Buy7/13/2011 8:38:01 AM

Pros: The pros of the mb would have been: Solid cap capacitors, HDMI and video chipset for multimedia, price point, MSI build quality.

Overall Review: To start I have been building systems from scratch since 1996. I am a computer programmer and network engineer. I have been doing this for a very long time. The system I build for my wife is thus: - AMD Athlon II X4 635 - 2GB Muskin DDR3 memory chips giving me 4GB Total - Power supply is a Antec 450w unit - connected to an APC from the start I have spent way to many frustrating hours trying to troubleshoot this MB. I have reinstalled everything from scracth, installed the latest drivers and dumped the logs to see what was going on. I can confirm that it is the motherboard because I have setup a new computer with the exact same components except the MB is a Biostar 880. I am having no problems with this setup. I also find it curious that this motherboard seems to be the European equivalent to the model they sold in the US. Just saying. I would like MSI to own up to this faulty/defective motherboard and replace it with one that works.

2 out of 2 people found this review helpful. Did you?
Manufacturer Response:
Dear Valued MSI Customer, We would like to apologize for the issue you have experienced with this particular mb. Please email me directly via usersupport2@msicomputer.com your mb's serial number and your complete contact information, subject heading "EAH880GM-E43". I would like to help you get this resolved. Best Regards, User Support MSI Product Support
Yao L.
Ownership: 1 month to 1 year
Verified Owner
Graphics Errors3/5/2011 2:24:15 PM

Pros: It had enough features for my needs, which is actually more than I would use.

Cons: Worked fine with my hardware except for one major problem. Anytime I run anything that involves a lot of video processing, my pc would crash and it would give me a "hypertransport sync flood error" (seen in Asus and MSI mobos). I've researched about the error for a long time, and have tried all the things other people have done to fix the problem, including increasing cpu, memory voltages, and other settings in bios. Also had to correctly set memory timings, but nothing worked. None of the preset bios configurations like fail safe works either. They aren't very helpful anyways considering some of the automatic settings weren't correct. All of the components are compatible with this mobo and I have tested all of them except the cpu and memory in another computer. The problem persist whether I use the onboard video or a discrete graphics card.

Overall Review: I have tried to find a fix for the issue for a few months now on and off when I am at home. Emailed that customer service representative and haven't got a reply in two weeks. I've given up and will just replace the board after overcoming the lose spent on this one.

2 out of 2 people found this review helpful. Did you?
Manufacturer Response:
Dear Valued MSI Customer, We would like to apologize for the issue you have experienced with this particular mb. Please email me directly via usersupport2@msicomputer.com your mb's serial number and your complete contact information, subject heading "EAH880GM". I would like to help you get this resolved. Best Regards, User Support MSI Product Support
Jenna R.
Ownership: 1 month to 1 year
Verified Owner
Do not buy3/2/2011 8:19:58 AM

Pros: Worked great for about two months. I purchased this motherboard specifically for the integrated video which seemed to work fine at first.

Pros: Nice motherboard. Easy to setup and maintain. Very stable. No issues whatsoever. Running Linux 64bit and Windows 7 64bit with excellent results. I use the system under Linux to run virtual versions of Windows 2008 Server and Windows 7. The MB has been fantastic.

Cons: None that I've found

Pros: Appears to be high quality based on appearance and look of components. Very easy to setup and installation instructions included are first rate. All connections are well labeled. Good Price.

Overall Review: I've always had good luck in the past with MSI products and wanted to build a faster machine. I'll be using Linux (Ubuntu 64 bit more than likely). Using with Athlon II X4 640 processor and stock fan.

Pros: Installed perfectly, booted properly first time. I have a Athlon II x3 455 Rana chip and it unlocked perfectly. Not only that but it's stable and cool with my Hyper 212+ As far as the sleep issues I have read about, you need to go in Bios, and change from S1 to S3, and it will sleep the whole computer. I figured that out with about 2 minutes of research. OC works like a charm, but with 4 cores at 3.3... I haven't really needed it. I do have a 7.3 WEI now, and am pretty impressed with this board.

Cons: I am now wishing I would have gone with a full size board, but if you don't need Crossfire, this is the board for you.