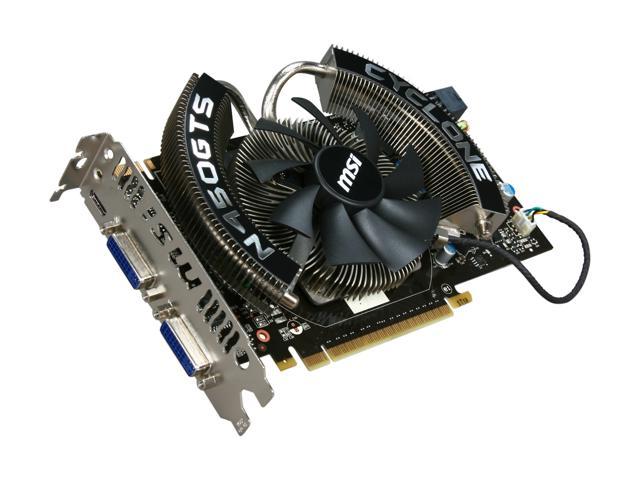 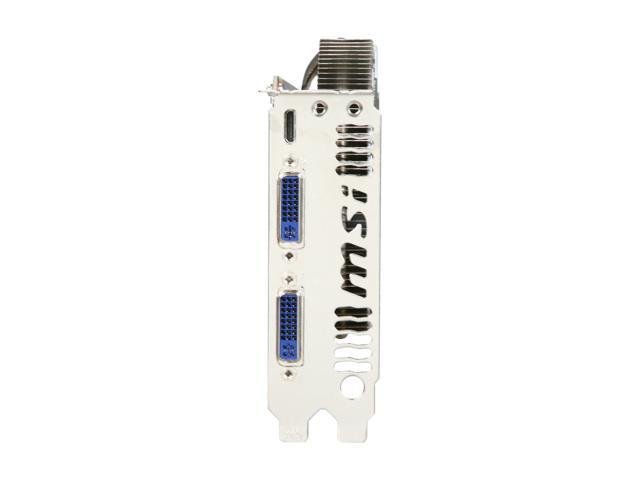 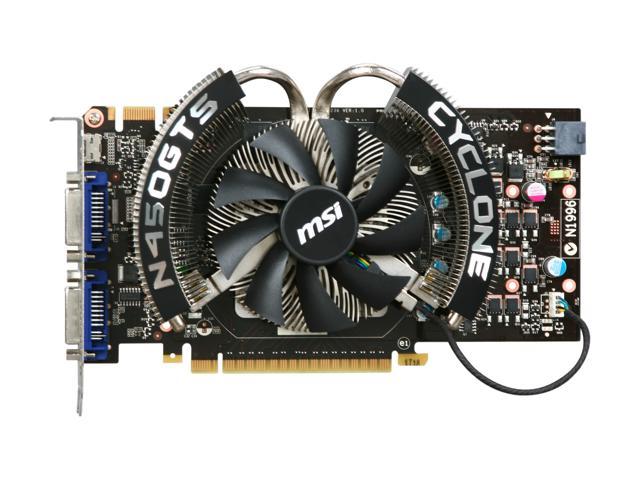 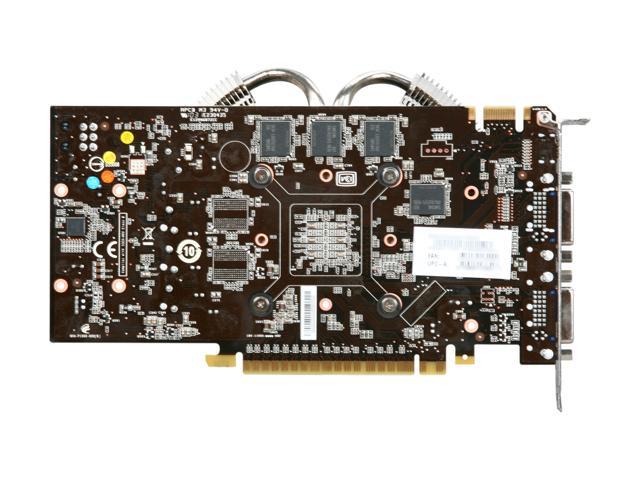 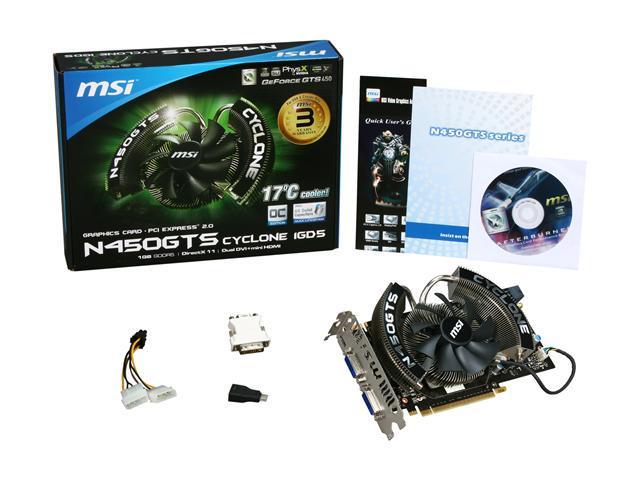 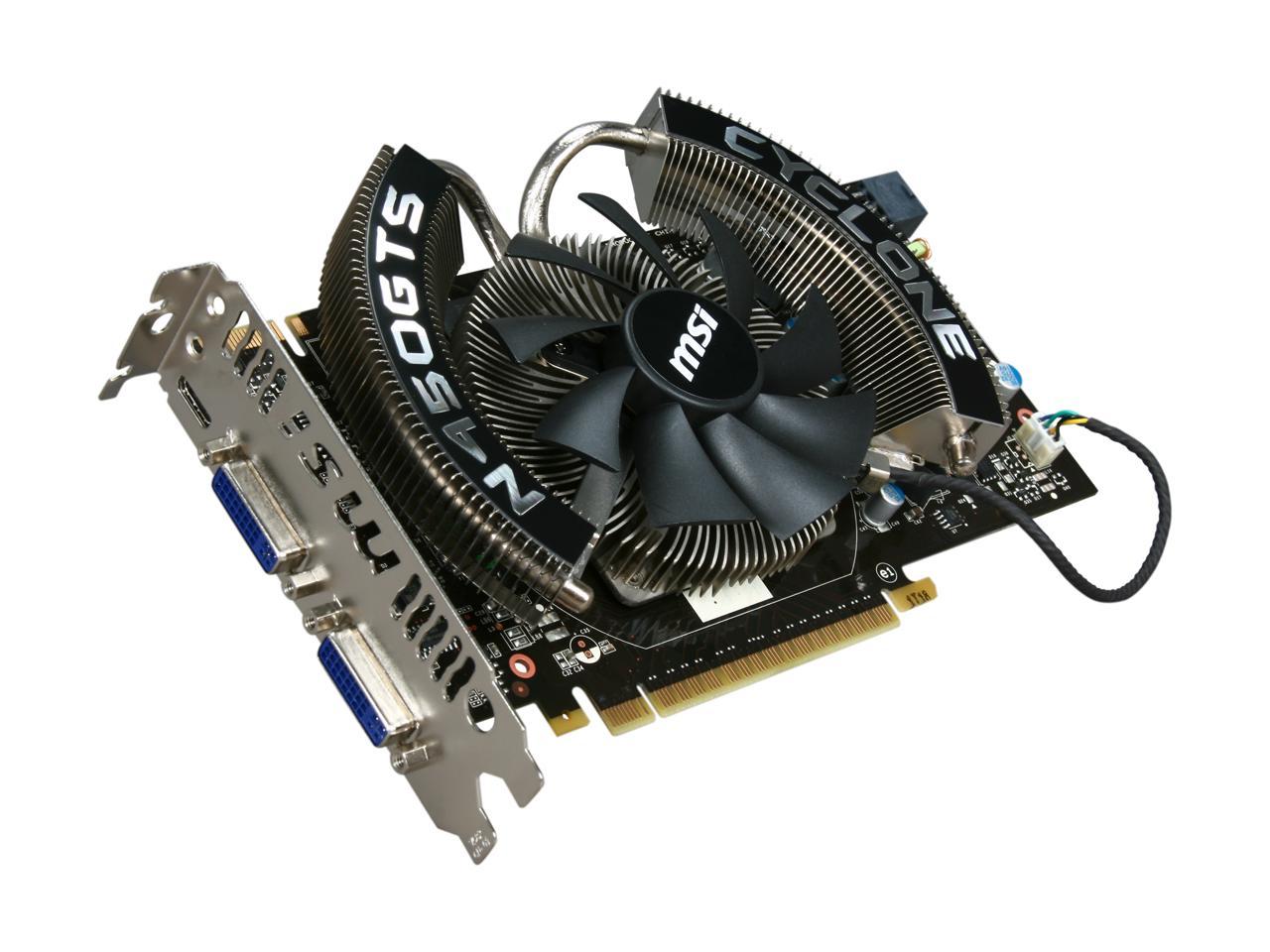 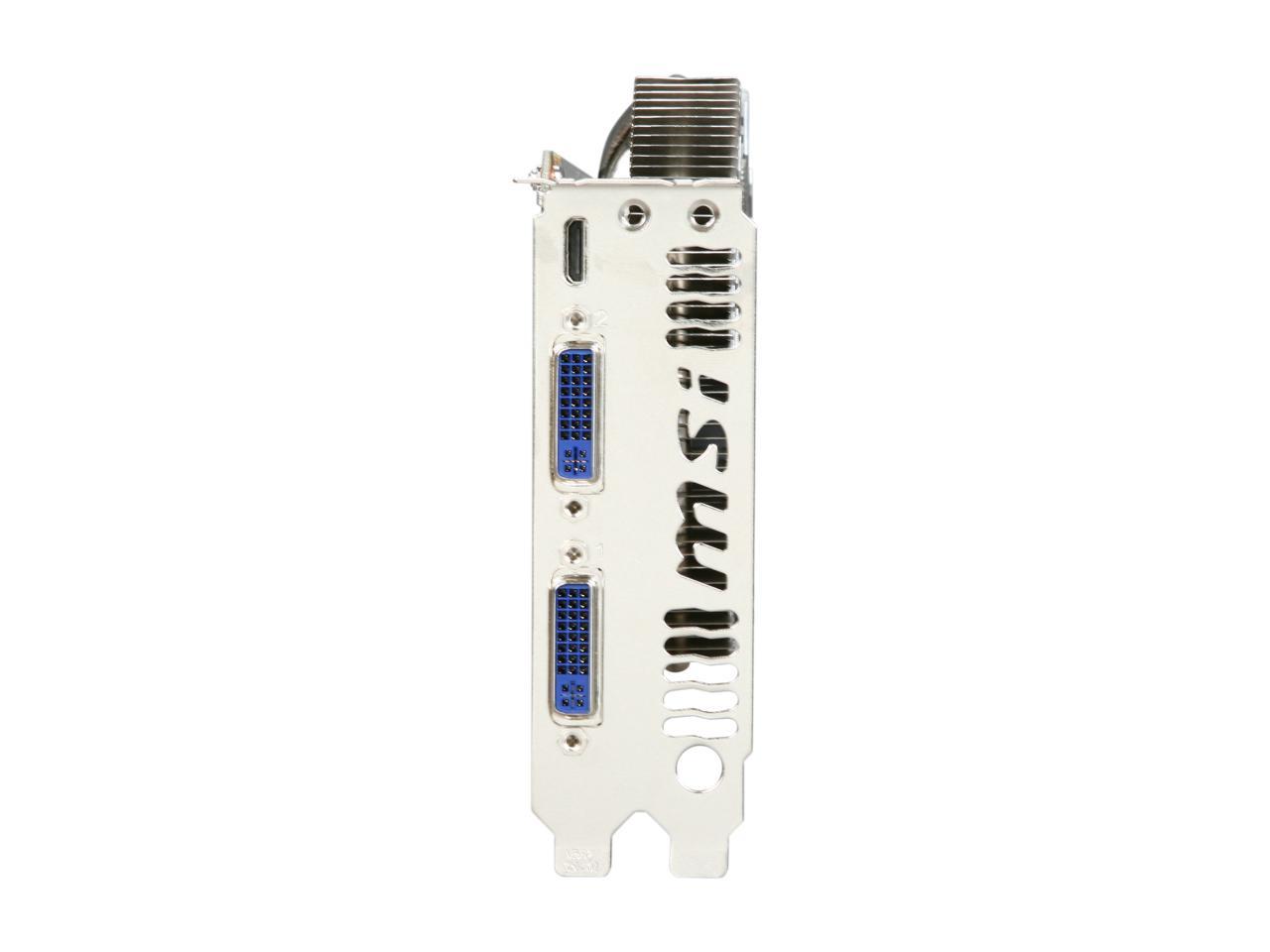 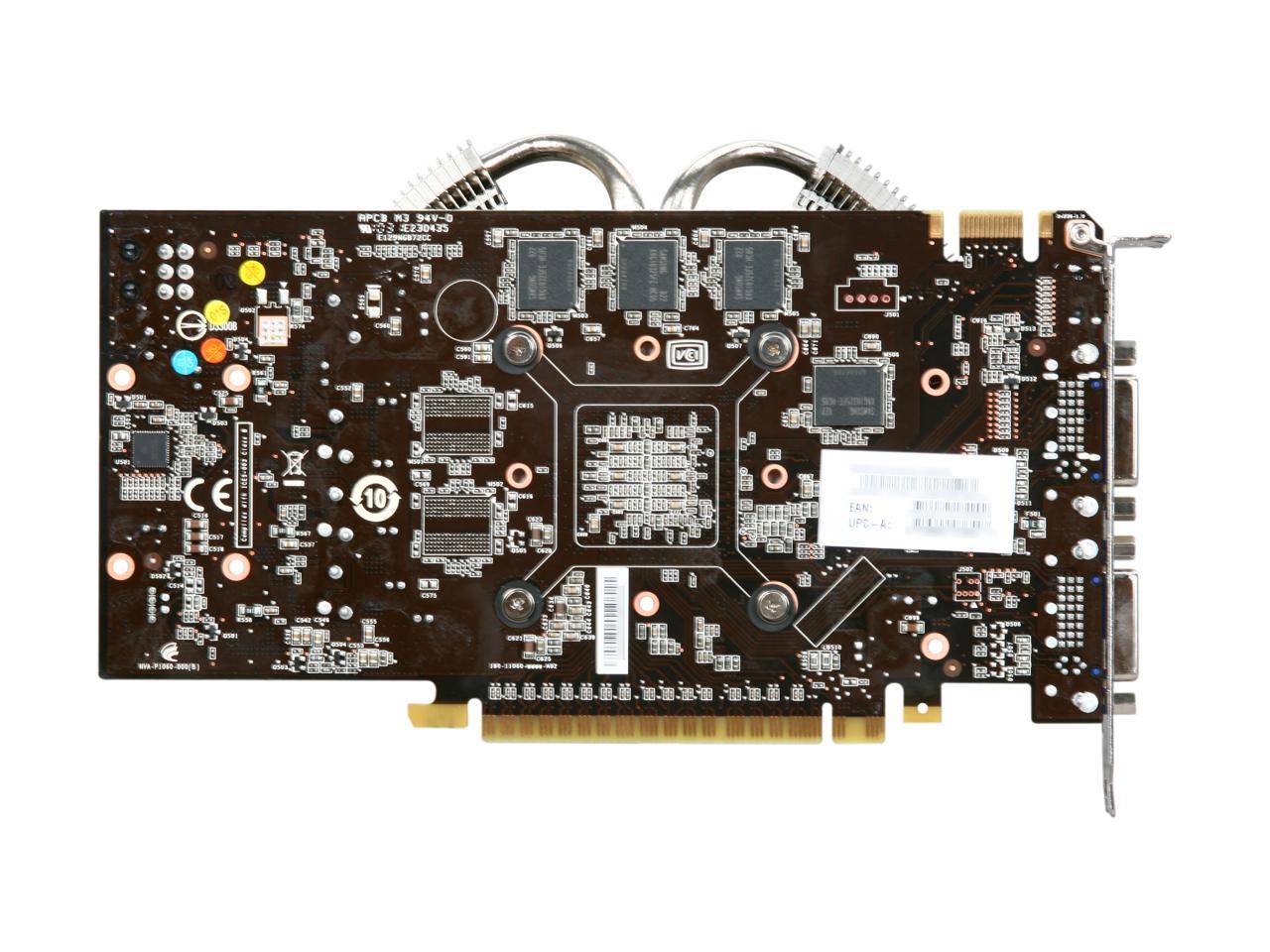 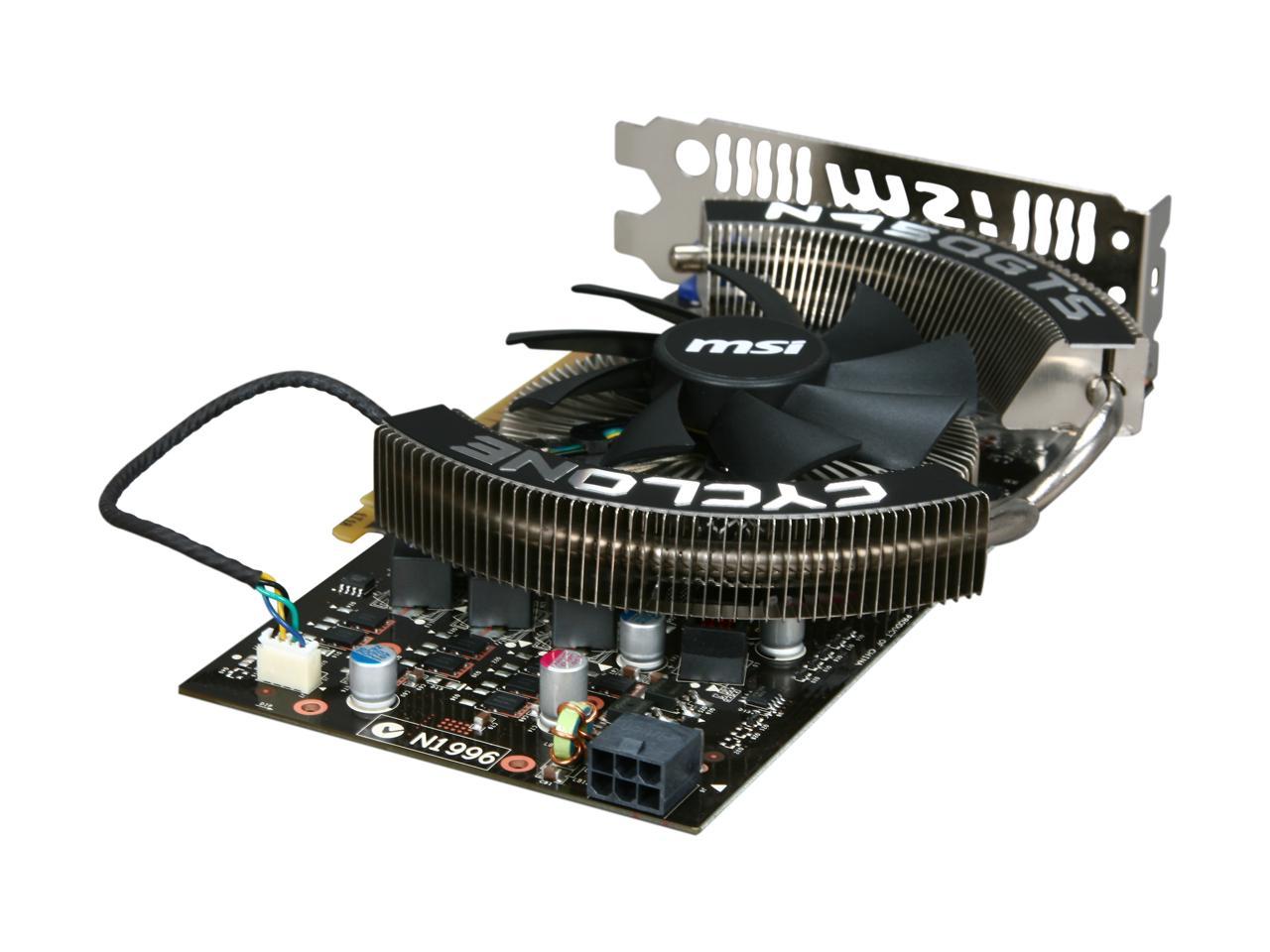 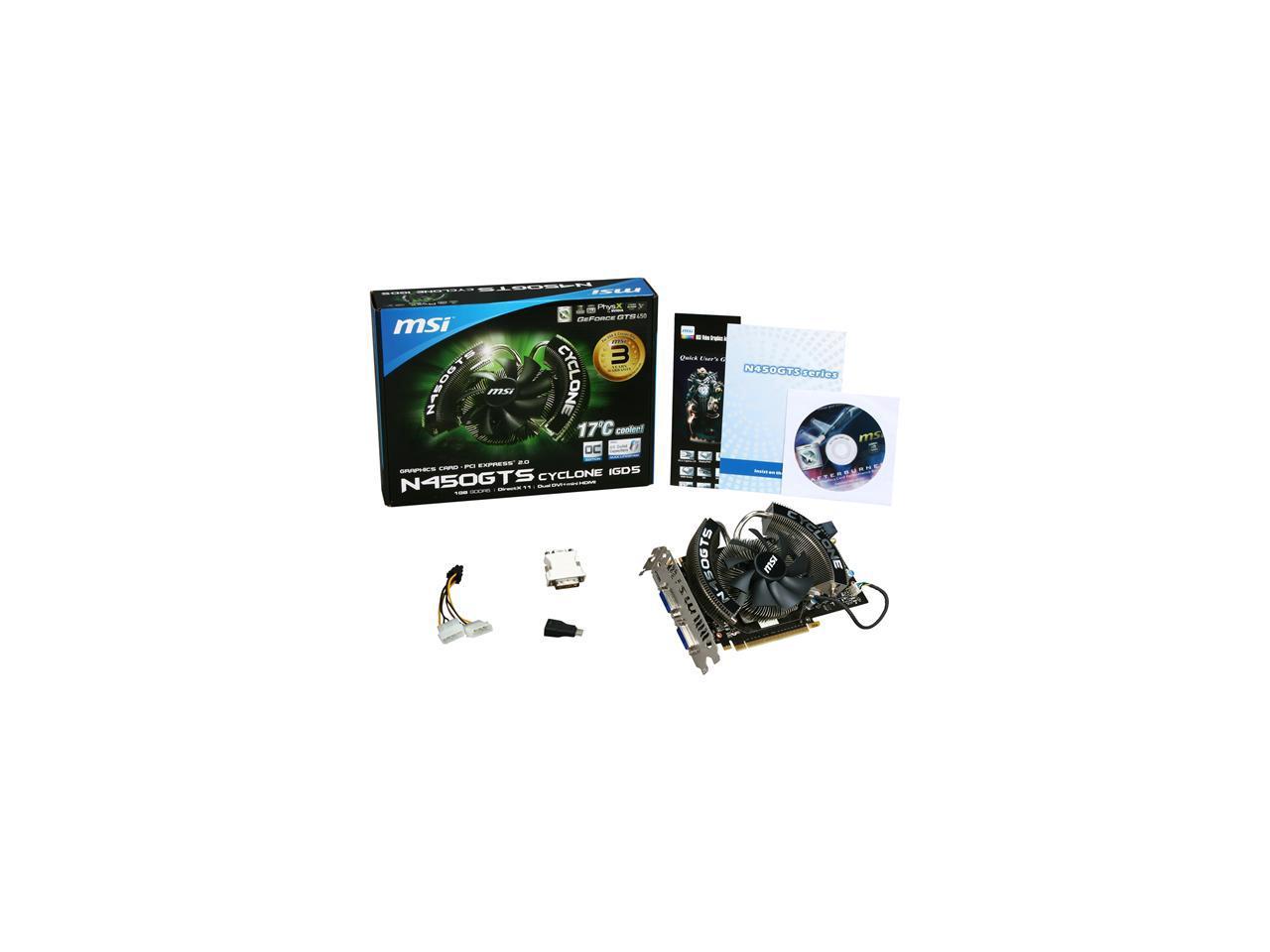 Pros: I don't know much about graphics cards, but this card hasn't flinched at any game I've tried on it. It averages 70 fps in Left 4 Dead 2 on full settings (no AA of course)

Overall Review: If you're one of the anti aliasing crowd, you probably best move on. Personally I'd trade x32AA for 1fps any day, so this card is perfect for me.

Pros: For anyone looking for decently powerful quiet gamming card this is about as good as it gets. I'm always aim for as little noise as possible and this card really exceeded my expectations. At idle (1300RPM) its effectively silent. Under load the fan dose pick up but the heatsink is really open and the fan is super smooth, MSI made a great choice here with the fan. The HS/F also dose a great job with temps as its the same heatsink MSI puts on the 460 GTX which has a much higher TDP. I topped out at round 60 - 61c under Furmark, idle is around 28c, pretty impressive.

Cons: The stock OC could be pushed a bit higher as the GPU certainly as the potential and the HS/F can for sure handle more as well. But thats about all really.

Cons: Very occasional system lockups so far but looking into this.

Overall Review: I have a Dell XPS410 that was long in the tooth. Before scrapping it for another machine, I opted to try upgrading the RAM (from 2GB to 4GB on faster chips) and the video card - from the GeForce 7900GS to this 450GTS. I had read that the stock PSU could handle it and this proved to be correct. Upgrade was a breeze, and now games that could barely run on DX10 are sailing on DX11. The other critical improvement was noise. The MSI card seemed to rate well as far as being quiet and I can only say that it's a whisper compared to the old card. Overall a highly recommended upgrade for owners in similar situations.

Cons: Slighty slower than 5770's that have been out forever 128 bit memory bus Several other gts 450 models cheaper

Overall Review: Bought this as a replacement for a 4850 that I bought less than a month ago. I only play WoW, and with the 4850 I was constantly seeing noticeable stuttering on screen in WoW and NOT in other games like CS:S and TF2. Stories online made it seem like it was a recognized issue with 4800 series video cards, so I decided to get this card as a replacement. I've been very happy with it. Stuttering in WoW has stopped and with vsync enabled my framerates are steady in cities and in raids. System: i3 530 4gb a-data 1333 ecs p-55h WD 640 black msi gts 450

Pros: I bought this card after a fair amount of homework. It seemed to put up some good numbers considering the price. It installed easily enough, although it does take up a fair amount of space. Ran nice and cool and performed Ok with windows 7 32 bit, MSI P7N 750i SLI motherboard, E8500 CPU, 500W PS

Cons: Worked for a few months, then yesterday I turned on my computer, left the room to grab a coffee, and came back to a blank screen. Had to reset the breaker on the power supply; the cards fan worked fine, voltage in checked good with multimeter, but the card was dead. Swapped out another card in the slot and it worked fine, so not a motherboard issue, reinstalled drivers so not a driver issue. The card just fizzled on me. That’s a lot of money to spend on a card that’ll only work for 3 months.

Pros: Fast for the price. I have oveclocked it to a bit over 950 using MSI AfterBurner (without altering voltage). Much beyond that and I start to get artifacts and the screen crashes. It gives me a WEI 7.3 (using the lastest Nvidia 266.58 drivers).

Cons: None so far. There are references to a Win 7 problem that some may mistake for a Vid Card problem - that is if you have Win 7 Screen-timeout ON and also Hide the Taskbar, there is a Win 7 glitch that freezes the PC and shows up as a video card problem in Device Events. It is Win 7 though, not the video, and Microsoft has a Hotfix for it - Google "Windows 7 freezes when idle" and there should be a msdn link that leads you to the fix.

Pros: Excellent price, and a fantastic upgrade from my 8 series. Initially purchased as an upgrade for my older system which I recently gave to a friend. I've been a huge fan/shopper of Newegg for years, and this would be my first negative experience with a product from you guys.

Cons: Purchased this card in late Sept 2010 and it was fine up until about a month ago. It is randomly crashing, regardless of driver versions. Afterburner will not run as it states it is corrupt or missing files, no matter how many times it is installed/removed/reinstalled. Case is running real cool, and the heatsink/fan on the gpu are still humming along... first time I've ever had a card just randomly flop like this. It can be fine for hours, then suddenly die 2 to 4 times in a row under varying cirumstances. Mid-game it will cause the comp to crash (WoW, StarCraft 2, CS:Source, etc). Just in Windows, it will show a video device failure & recovery, without an automatic restart.

1 out of 1 people found this review helpful. Did you?
Manufacturer Response:
Dear Valued MSI Customer, We would like to apologize for the issue you have experienced with this particular VGA. Please email me directly via usersupport2@msicomputer.com your VGA's serial number and your complete contact information, subject heading "EAHN450GTS". I would like to help you get this resolved. Best Regards, User Support MSI Product Support
Cham S.
Ownership: less than 1 day
Verified Owner
Awesome Vid Card1/18/2011 3:17:38 PM

Pros: Upgrade from my old school x1650 pro, HUGE DIFFERENCE, I am casual PC gamer, i was looking for a good affordable vid card, and i decided this one. I am loving it so far.

Cons: It was slightly bigger then i thought, i have a small tower, it was a tight fit. i expected this though.

Overall Review: I paired this with some extra 2gig memory and almost double my benchmark. 0_o Looks like i do not need a new comp for awhile. Mostly Used for School, Movies, and casual gaming.