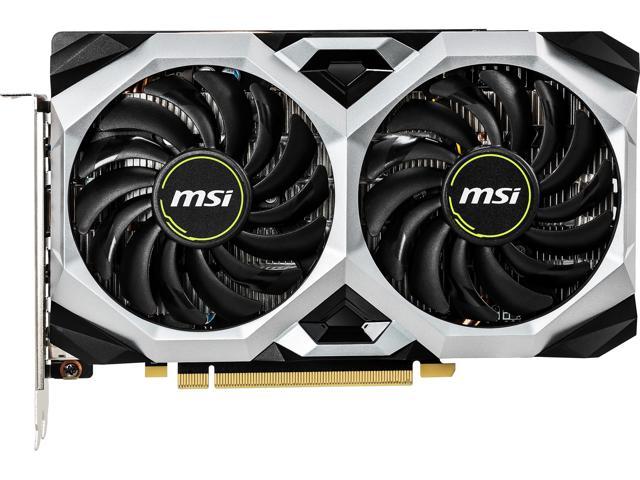 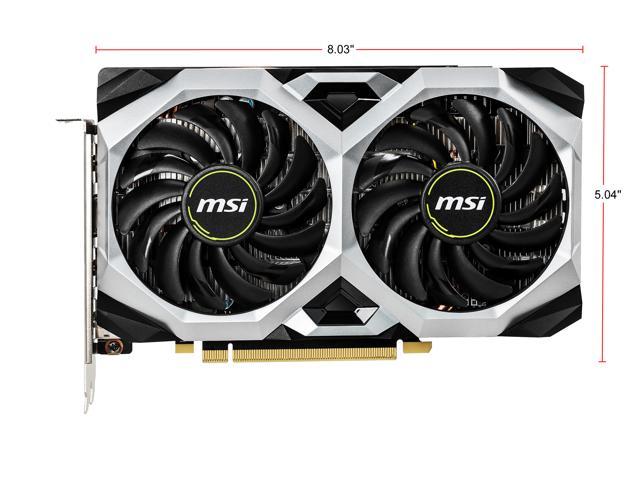 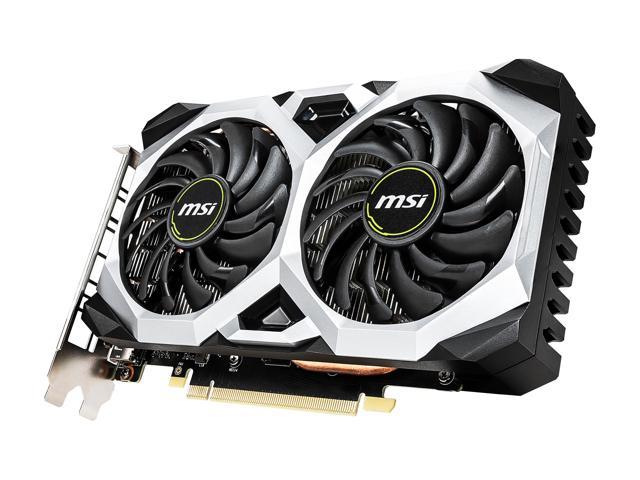 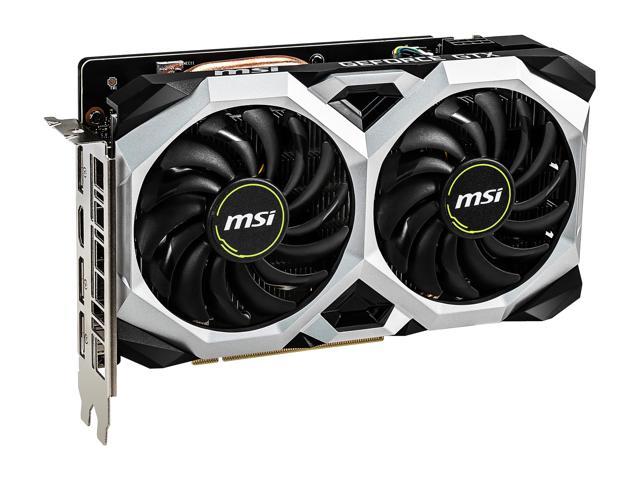 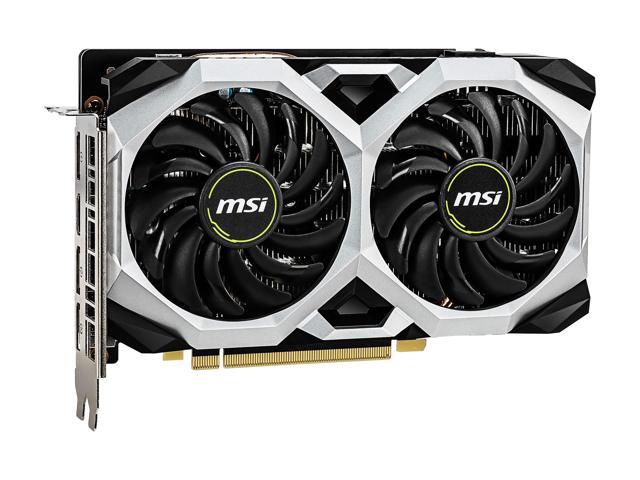 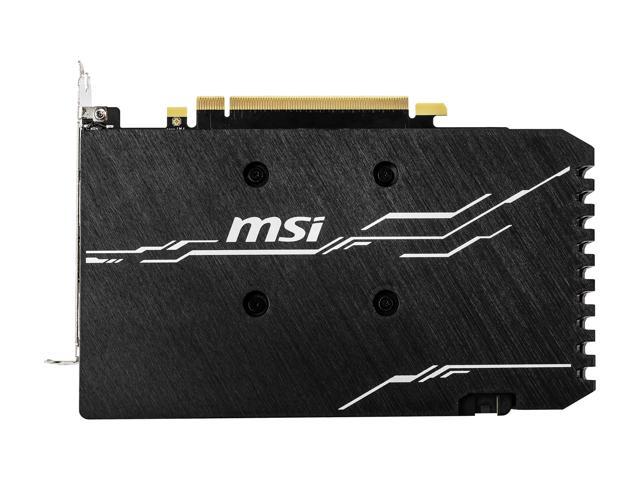 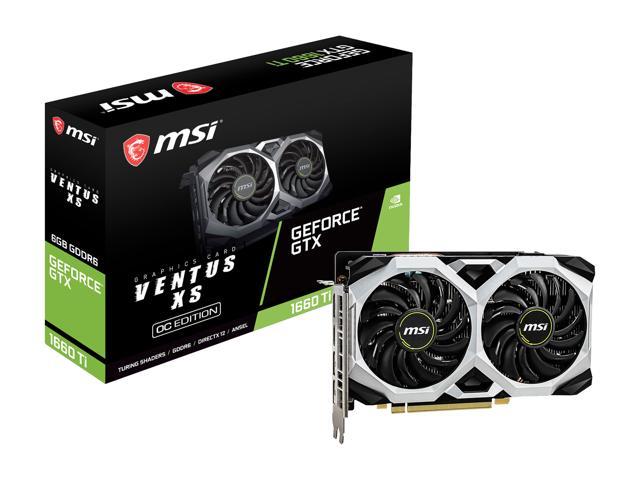 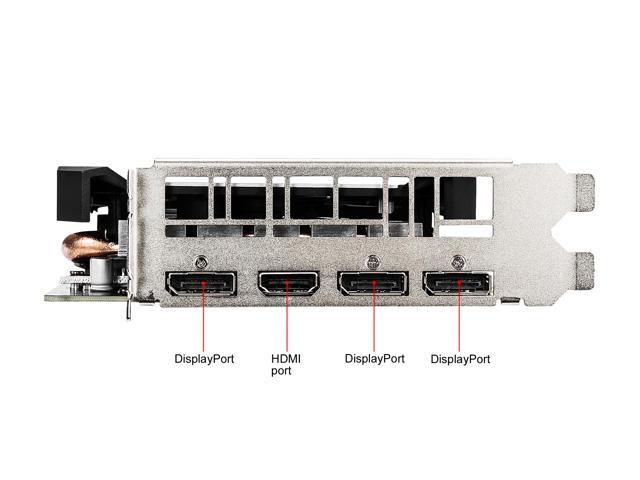 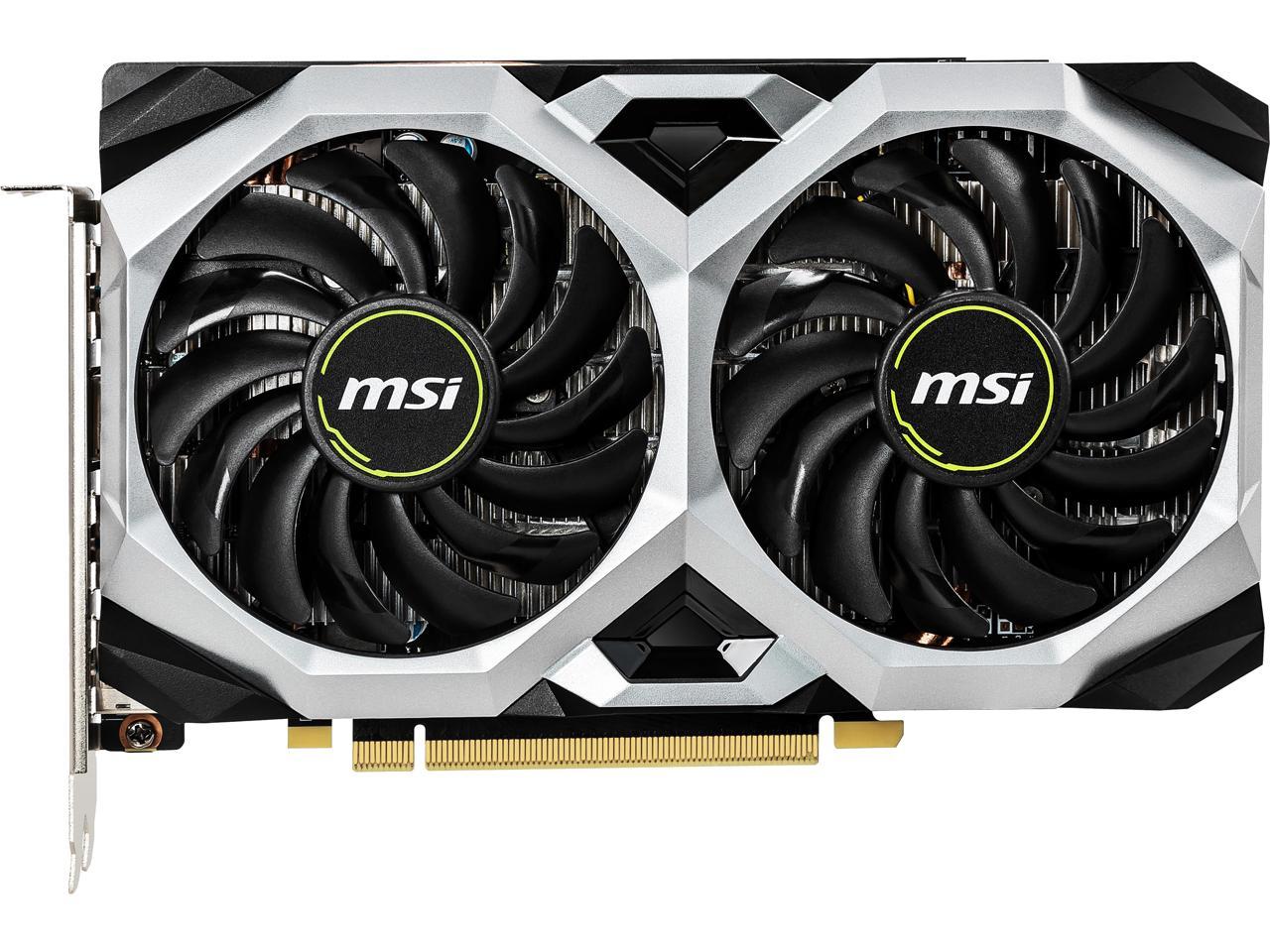 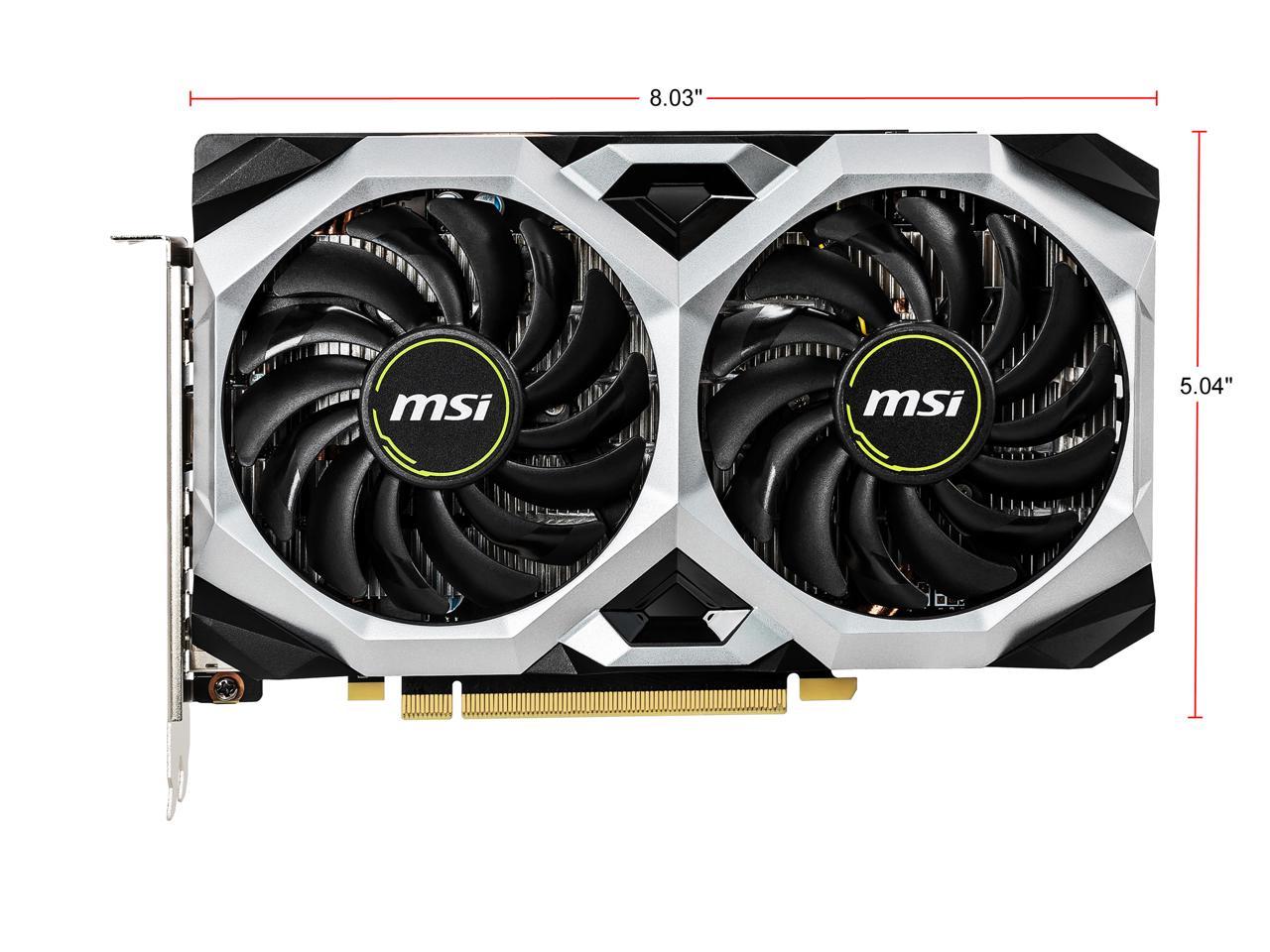 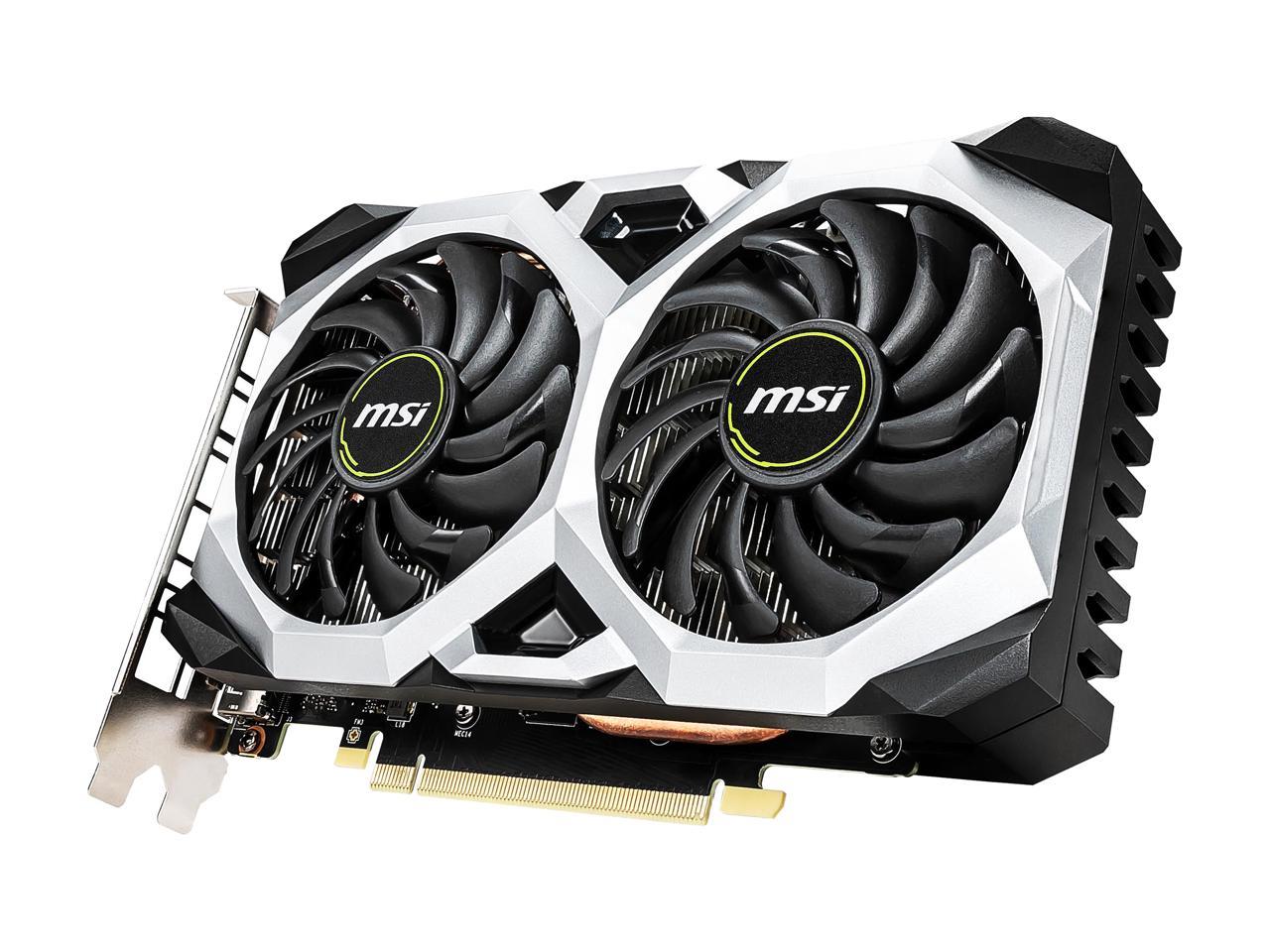 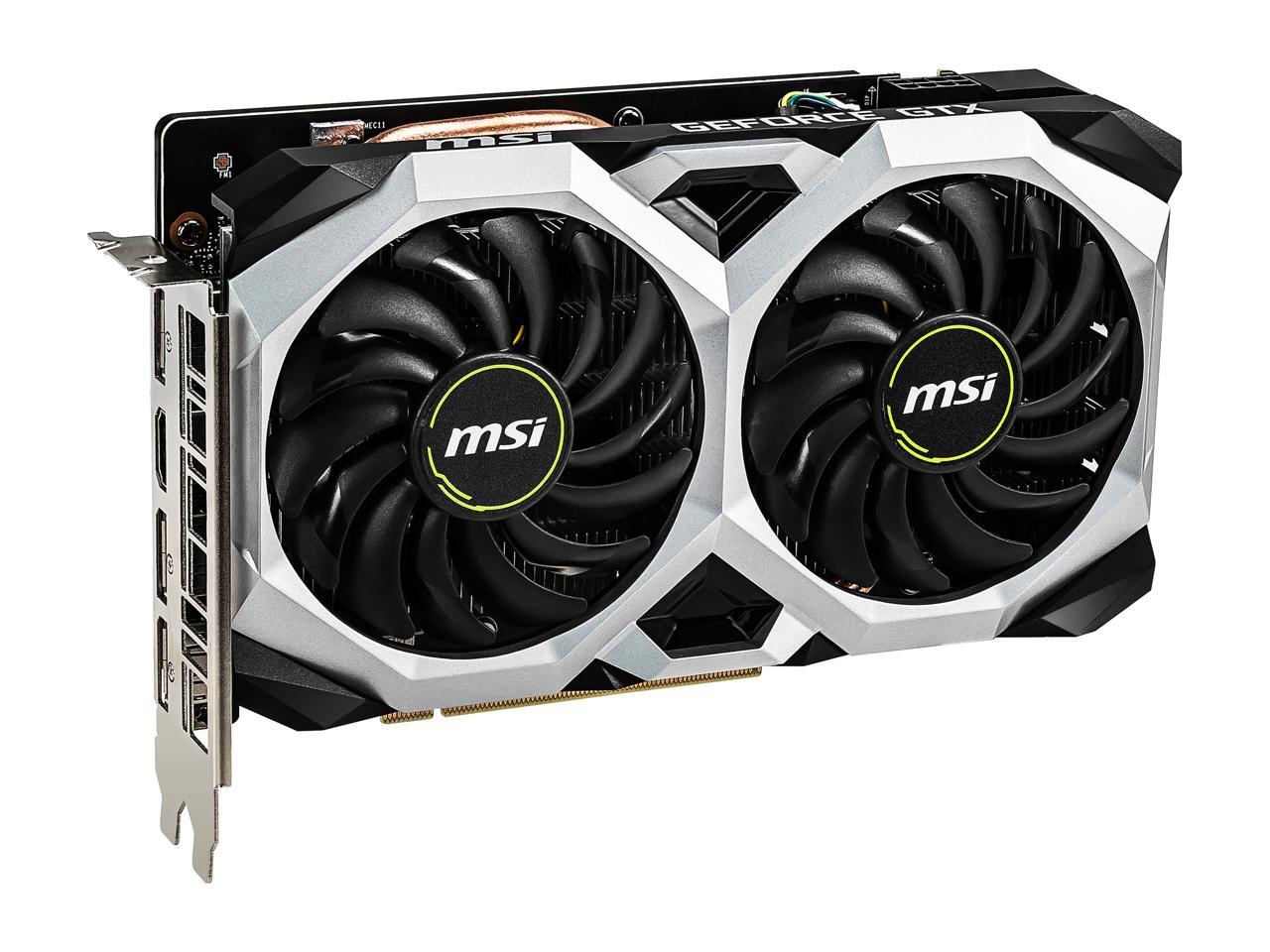 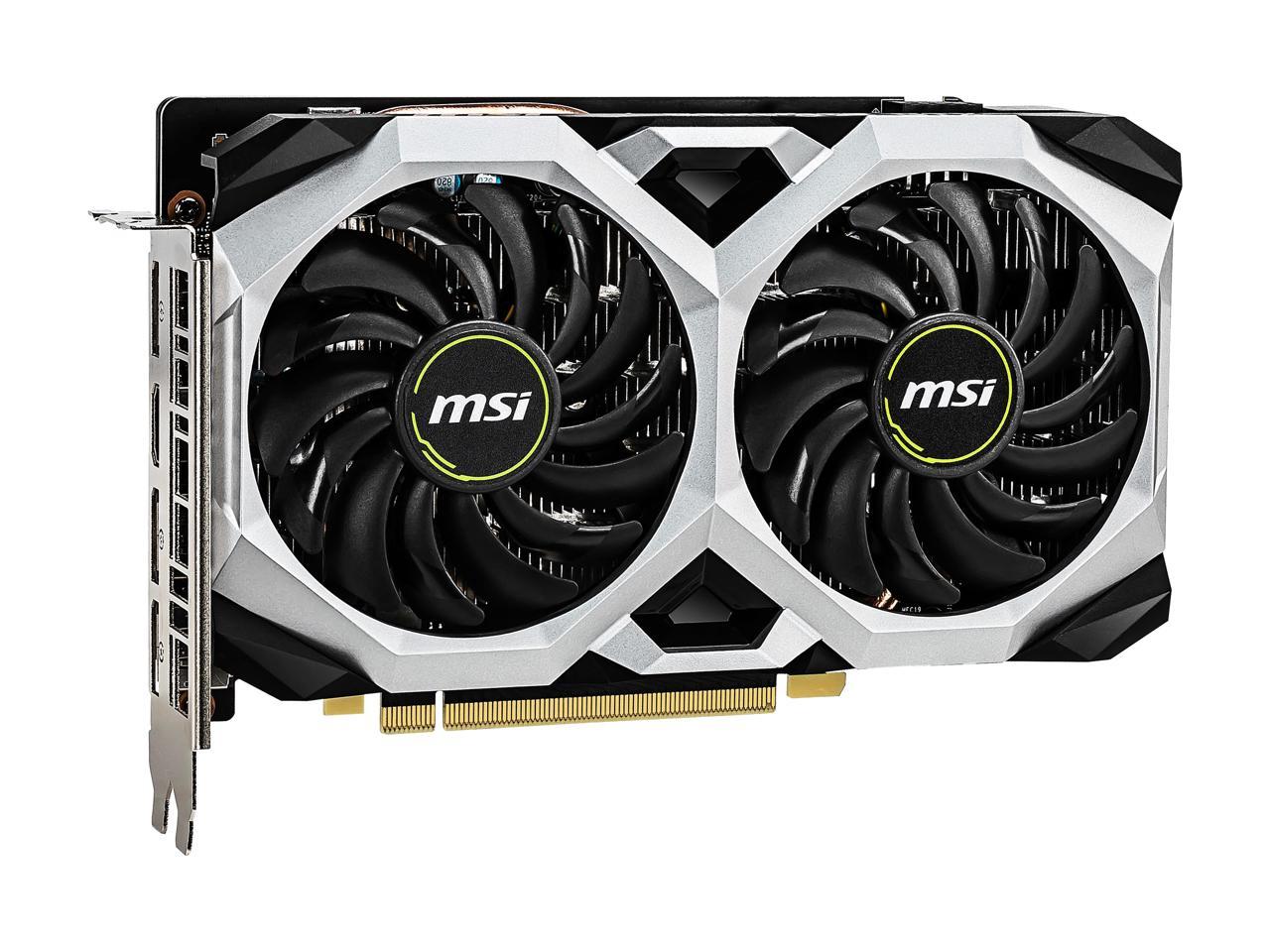 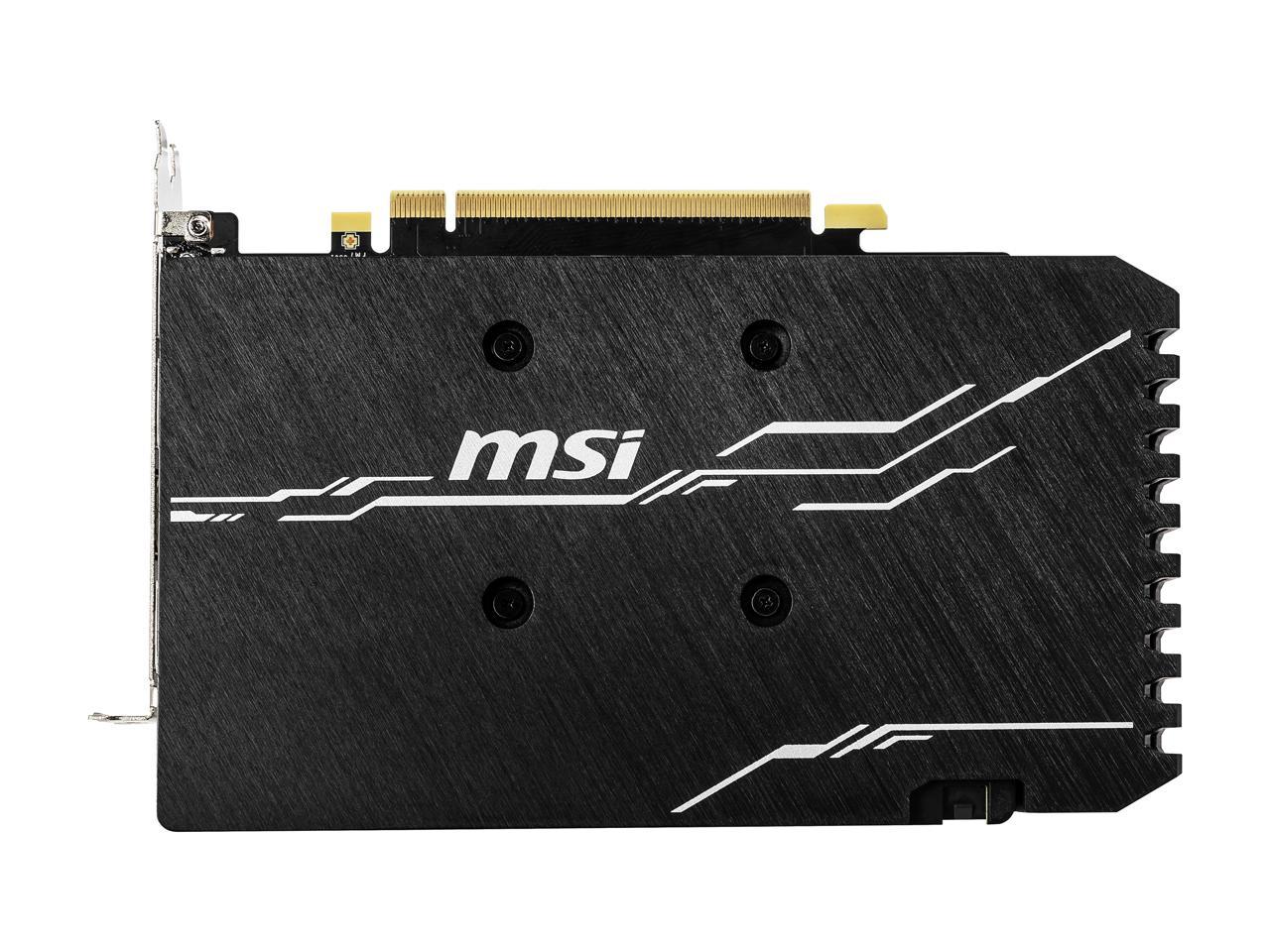 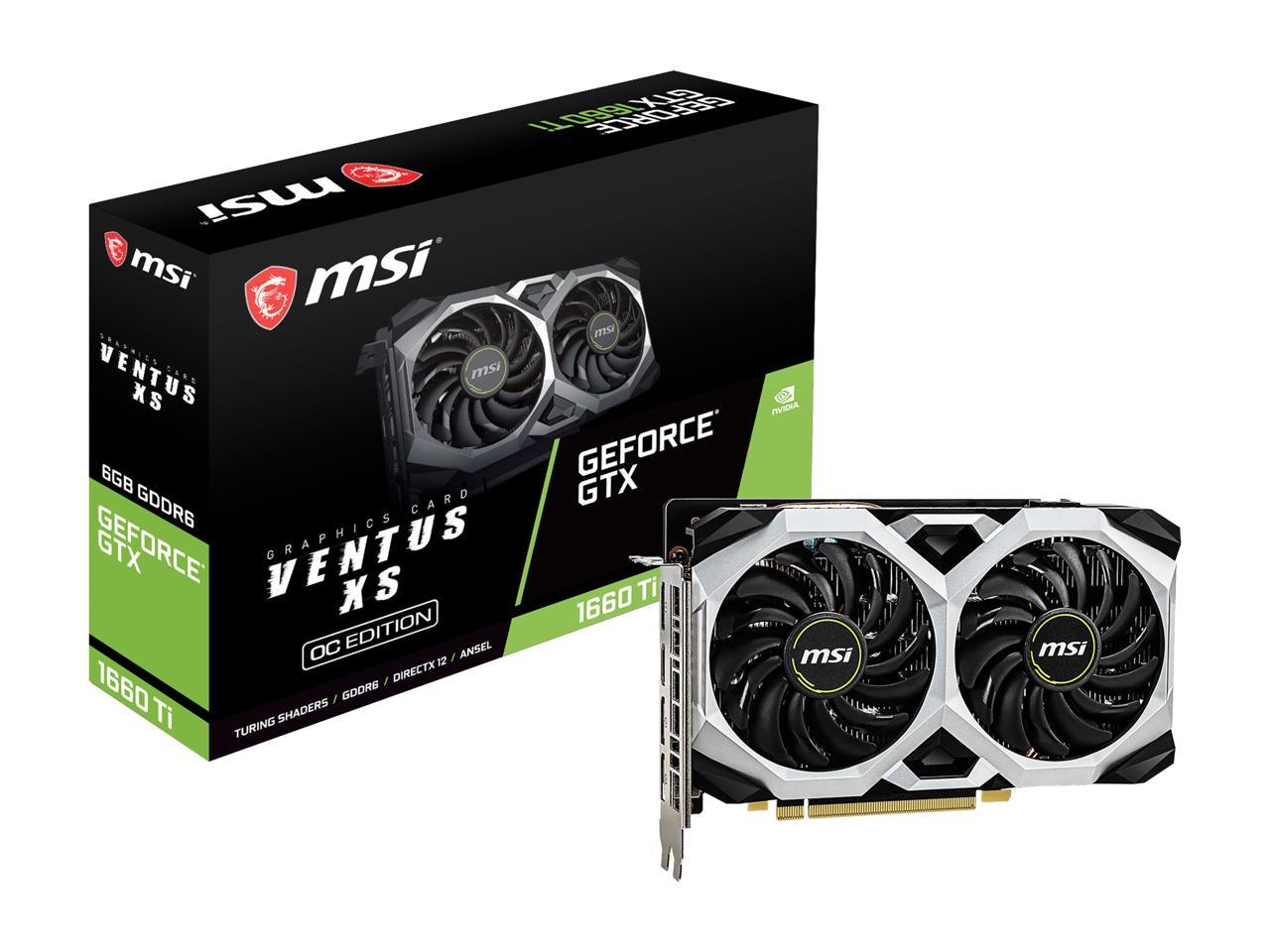 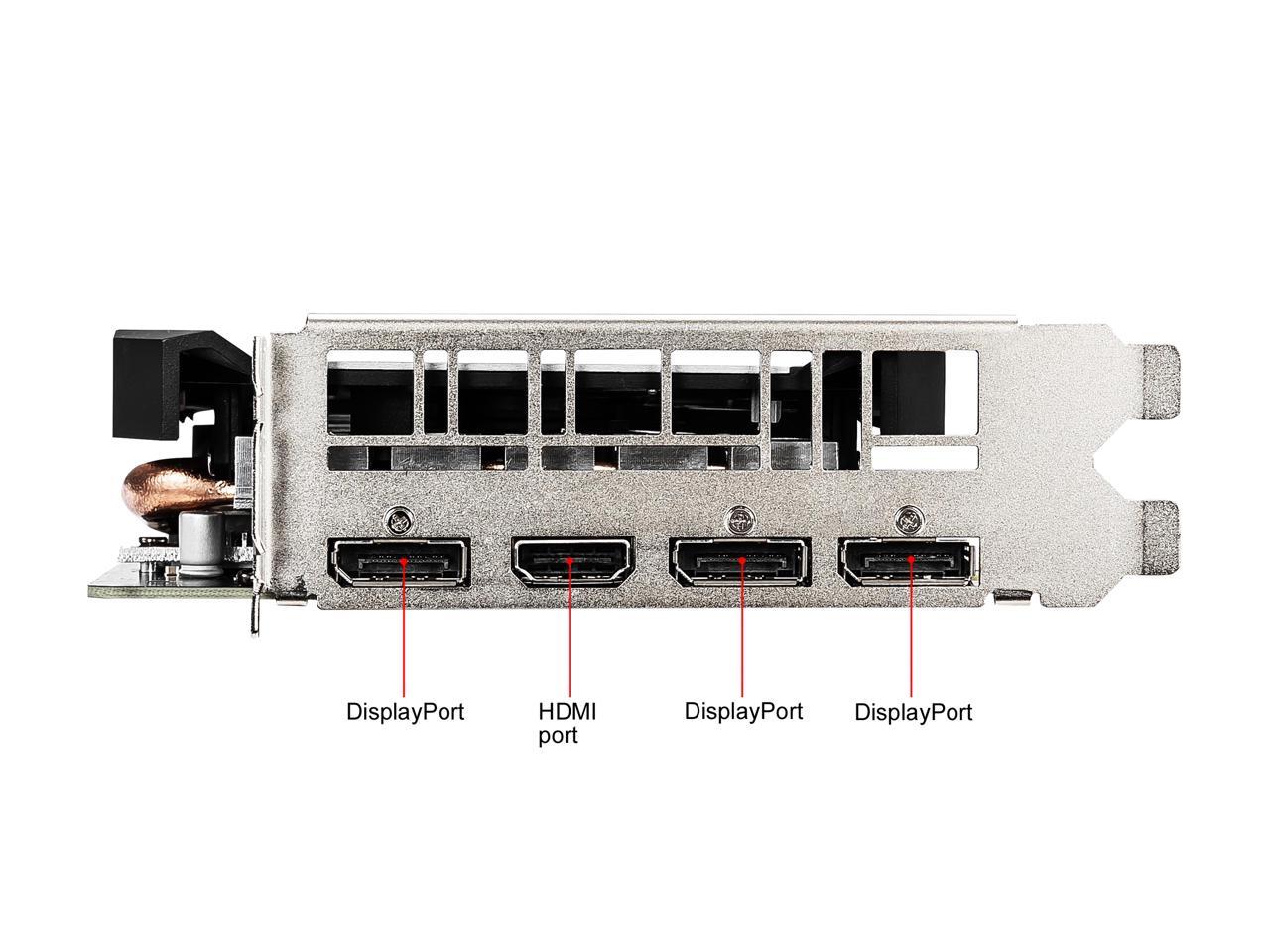 Capture + share videos, screenshots and livestreams with friends. Keep your GeForce drivers up to date and optimize your game settings. GeForce Experience™ lets you do it all, making it the essential companion to your GeForce® graphics card.

With its fresh, new dual-fan design, VENTUS proudly displays its industrial shapes in neutral colors to fit any build. These have a special curved blade that accelerates airflow, increasing its effectiveness. The classic fan design pushes down a steady airflow to the massive heat sink below.

WE'VE GOT YOUR BACK

A sturdy backplate helps to strengthen the graphics card and complements the design to look even better. MSI Afterburner is the world's most recognized and widely used graphics-card overclocking software. It gives you full control of your graphics card and enables you to monitor your system's key metrics in real-time. The latest version of MSI Afterburner features OC Scanner for GTX 16 series graphics cards. OC Scanner is an automated function that will find the highest stable overclock settings for your card. Giving you a free performance boost for a smooth in-game experience, thanks to higher FPS.

Pros: + Consume only 120 to 130 watts (Less Watts means less heat) + Decent heatsink for Base Model (around 68 at max temp) + Backplate.. which is nice for a base model + It's mostly quiet even at full load, unless you increase fans up to %100

Cons: - No fans stop feature, but I guess that's is not available in Base Model

Overall Review: - It's like q Square Lol.. that's all I can think about xD

Manufacturer Response:
Dear Valued Customer, Thank you for sharing your experience with the MSI product! If you ever require technical assistance, please feel free to contact our technical support department directly at 626.271.1004 from M to F, 9am to 6pm Pacific Standard Time. Thanks for choosing MSI! Best Regards, MSI Review Team
Alder M.
Ownership: 1 week to 1 month
Verified Owner
Good Bang for Buck10/1/2019 11:08:55 AM

Overall Review: When I was building my second rig, this was the toughest decision to make. I was going to get an RX 5700, but I later decided it was really overkill for 1080p. Wasn't really feeling the RTX 2060 and the RX 590 is too far of a step down, and I couldn't find any new Vega 56s that I was interested in (i'm a little scared of used hardware if you can't tell). Eventually I decided to grab this. It was small, so it was perfect for my build. It is also crazy efficient compared the RX 590. I normally don't care about that sort of thing but it is a nice bonus. As for the performance, it absolutely knocks 1080p out of the park. I can max out Forza Horizon 4, Forza Motorsport 7, DIRT 4, and Skyrim with ease, barring any crazy AA settings on DIRT 4. If you dial back some settings you could get very close to or hit the 144 FPS mark, which is something else, let me tell ya! Now for some of the negatives, although neither of them are truly even a big deal. Unlike my much cheaper RX 570, there is no zero RPM mode, at least based on what I've seen so far. I didn't see a way to configure this in the NVIDIA control panel, and MSI Afterburner won't let me put the fans below 41%. That being said, the fans are quiet anyway so it hardly matters. Thanks to this it idles in the 30s as opposed to my RX 570 which was in the 50s. The VRAM also raises a concern for me. While 6 GB is perfectly adequate now for 1080p, I worry about it in a few years time. For me, games typically use around 4 GB. It SHOULD be fine but I worry that I'll start hitting the VRAM capacity and running into performance issues in the near-ish future. Few other things to note, if you have a Freesync display, see if you can enable G-Sync. I managed to get it working on my Freesync display as I had an AMD card before this, and it works very well barring a few errors. Really helps performance in a lot of games which were previously very choppy, particularly FM7 which suffered a host of performance issues. So basically, you should buy this card. Although with rumors of the RX 5600 around the corner, and supposedly the 1660 Super, I'd highly recommend holding out until then. As of me writing this though, this is possibly the best 1080p card, 2nd to the RTX 2060 or Vega 56.

Manufacturer Response:
Dear Valued Customer, Thank you for sharing your experience with the MSI product! If you ever require technical assistance or warranty support, please feel free to contact our technical support department directly at 626.271.1004 from M to F, 9am to 6pm Pacific Standard Time. Thanks for choosing MSI! Best Regards, MSI Review Team
Matthew M.
Ownership: 1 month to 1 year
Verified Owner
Amazing upgrade card for a no fuss build4/6/2019 10:35:12 PM

Pros: Small Design The cheapest dual fan I could find at the time from a reputable brand Thermals have never gone over 65c and the auto fan curve hasn't gone over 65% Amazing performance

Cons: My only real complaint is that there is no control for the power limit on it so overclocking is very limited, but even so the cards performance is still quite great for the price.

Overall Review: Just make sure you've got an open 8 pin connector on your PSU since you will need to have additional power.

Cons: No issues so far

Pros: This is one amazing GPU! Coming from a GTX 770 (2GB) from my older gaming PC, and some other cards that I tried on my newly built PC within that range, all I can say is wow! This GPU makes a huge difference and exceeded my expectations greatly. The quality of graphics immediately enhanced. Clearer, sharper, more vivid, best I have seen ever! I have always been a 1080p gamer and this card suits me just right. High settings with games like Assassins Creed 4, Dying Light, Metro Exodus, with no lag at all. Never tried ultra yet but that is my next step, and I'm sure this card will have no problem with that :-).

Cons: None at all!

Overall Review: If you need a GPU upgrade and you can't or don't want to spend much and you are mostly a 1080p gamer like myself, then do yourself a favor and buy this card now! You will not be disappointed!

Pros: Runs anything I throw at it, temp doesn't exceed 68*C under intensive load.

Overall Review: Runs any of my games on high/max, decent cooling and I don't find it especially loud.

Manufacturer Response:
Dear Valued Customer, Thank you for sharing your experience with the MSI GeForce GTX graphics card! If you would like further technical assistance, please feel free to contact our technical support department directly at 626.271.1004 from M to F, 9am to 6pm Pacific Standard Time. Thanks for choosing MSI! Best Regards, MSI Review Team
Anonymous
Ownership: 1 week to 1 month
Verified Owner
Sweet Spot 1080 Gaming Card for 144 Hz9/3/2019 11:11:32 AM

Pros: Better hardware than most GTX cards Card should shine for 1080 gaming at 144 Hz

Cons: You probably don't want this for serious VR or 4K Tweener card: more expensive than cheap cards and without the power of the top of the line cards

Overall Review: Typically the best tech deals are on technology that is one step behind the current. The new current tech drives down the price of the still capable older tech - creating bargains. This is an oddball video card where nVidia actually followed that strategy because not many RTX games were being released. The newer nVidia tech is RTX (ray tracing) so for this card, they took the hardware for the RTX - more transistors, more pipelines, more bandwidth and ripped out the RTX and put GTX in on top of the better hardware. That is why this is a sweet spot mid-range card with the newer hardware developed for RTX running the older GTX package.

Pros: Great card, fast on a 75Hz 2560 monitor, absolutely outstanding for the price range. Bought two of these for myself and a friend, we have no complaints whatsoever, they run any games we've tried just fine. Nvidia's Turing architecture is just awesome.

Overall Review: Some people complained about this card running hot when it's at 70. That's NOT really that hot for a decent card performing well. Not sure what people expect, if you have liquid cooling it would go down some. But this is literally the best bang for the buck, I did extensive research and comparison before buying. We had RX 580 8 GB cards for a very short time but they were awful, kept blinking black every few minutes and running REALLY hot all the time, we dumped them and got this card and haven't looked back. If you're looking at NOT spending a small fortune for a really high performance card, just buy this and you will not be disappointed. It is the very best for under 300 that you can get.

Manufacturer Response:
Dear Matthew, Thank you for sharing your experience with the GTX 1660Ti VENTUS XS! If you ever require technical assistance or warranty support, please feel free to contact our technical support department directly at 626.271.1004 from M to F, 9am to 6pm Pacific Standard Time. Thanks for choosing MSI! Best Regards, MSI Review Team