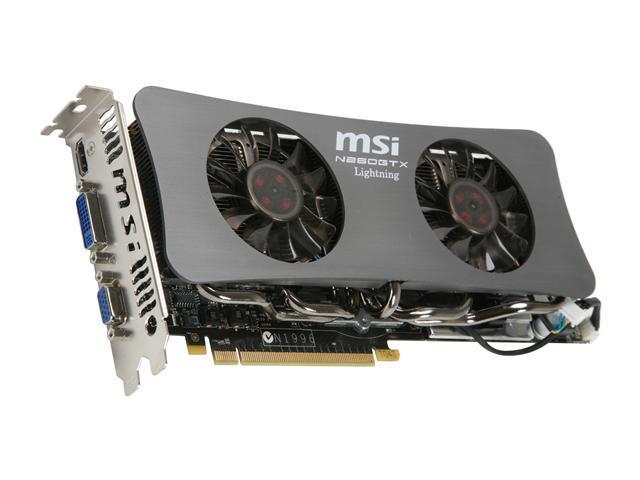 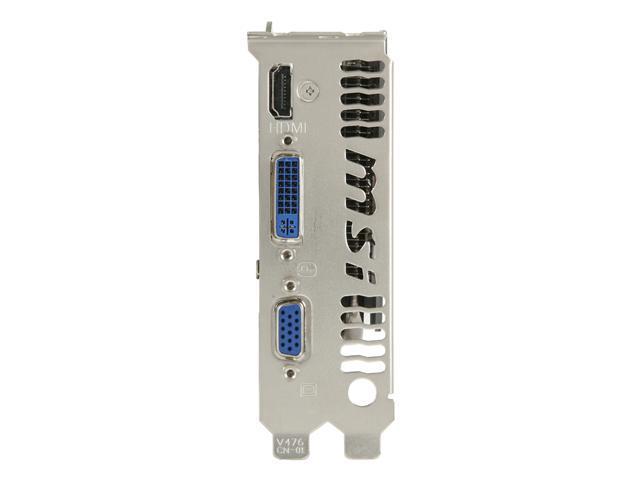 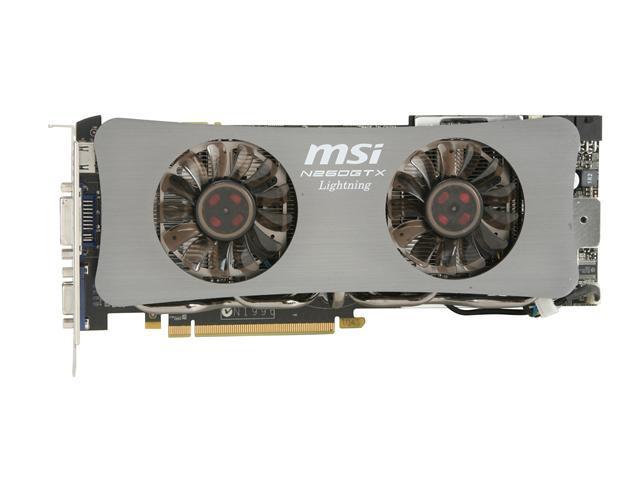 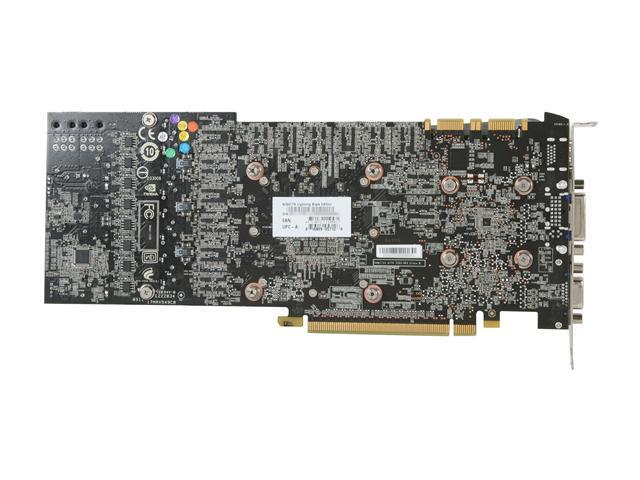 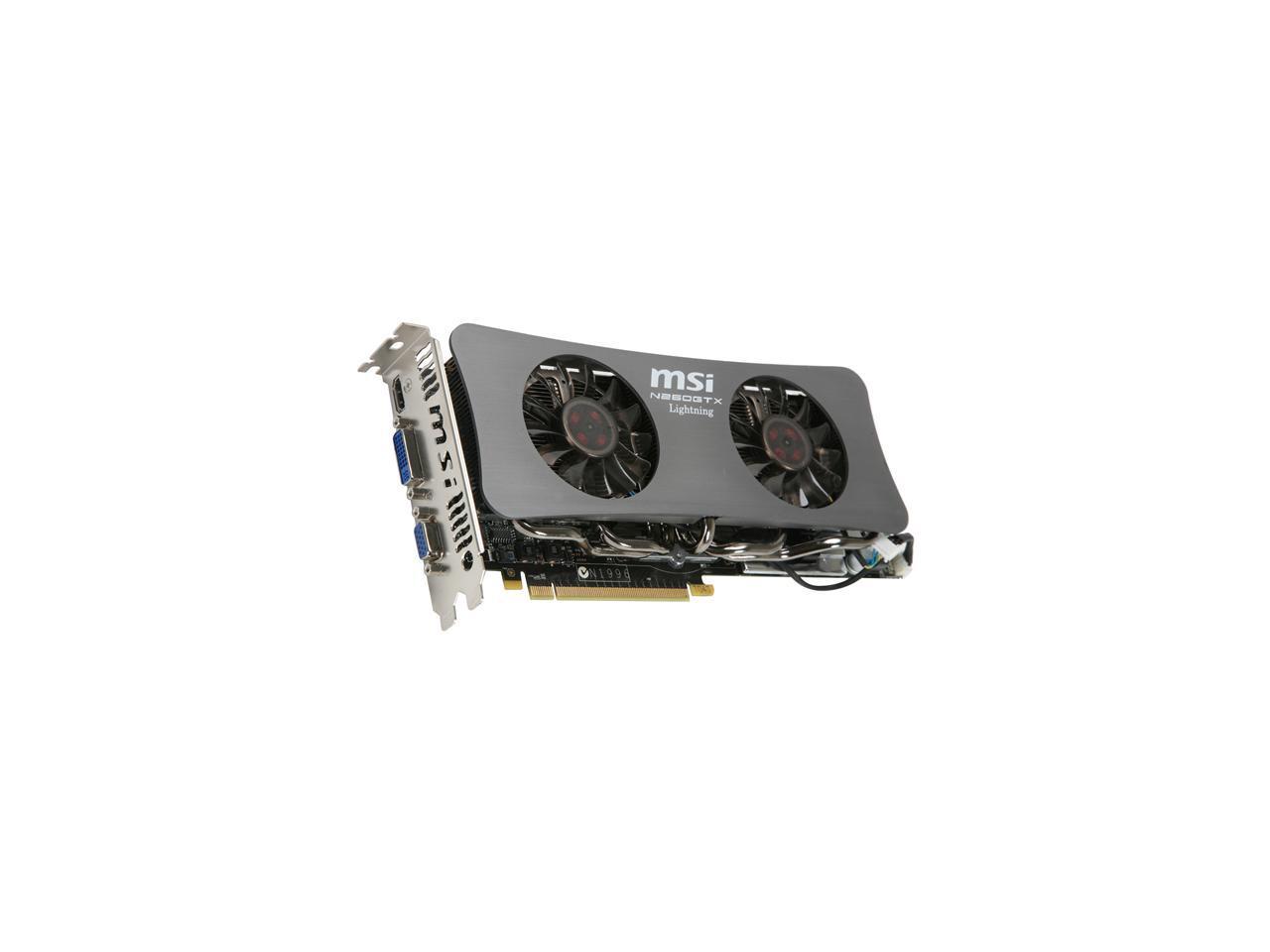 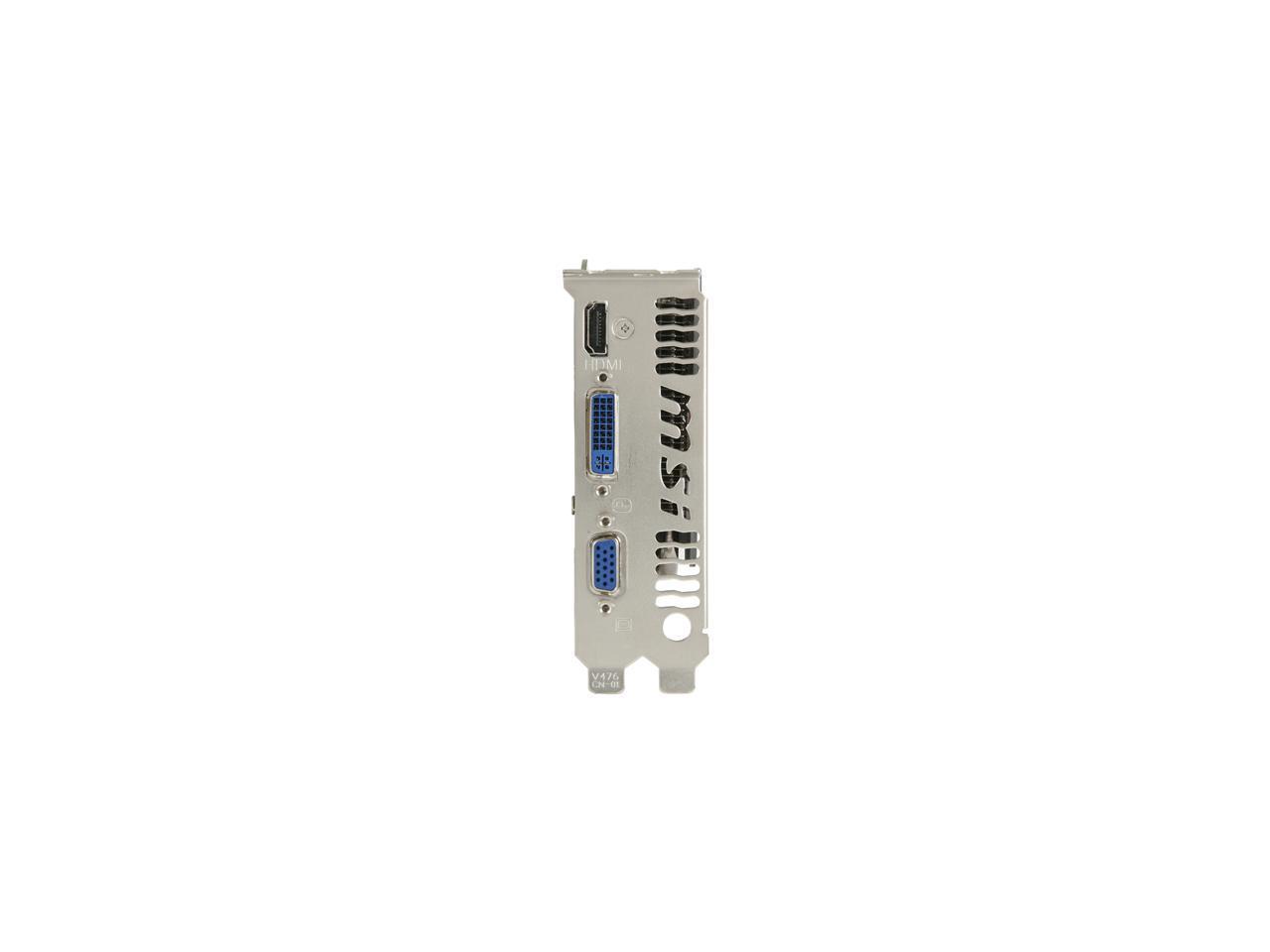 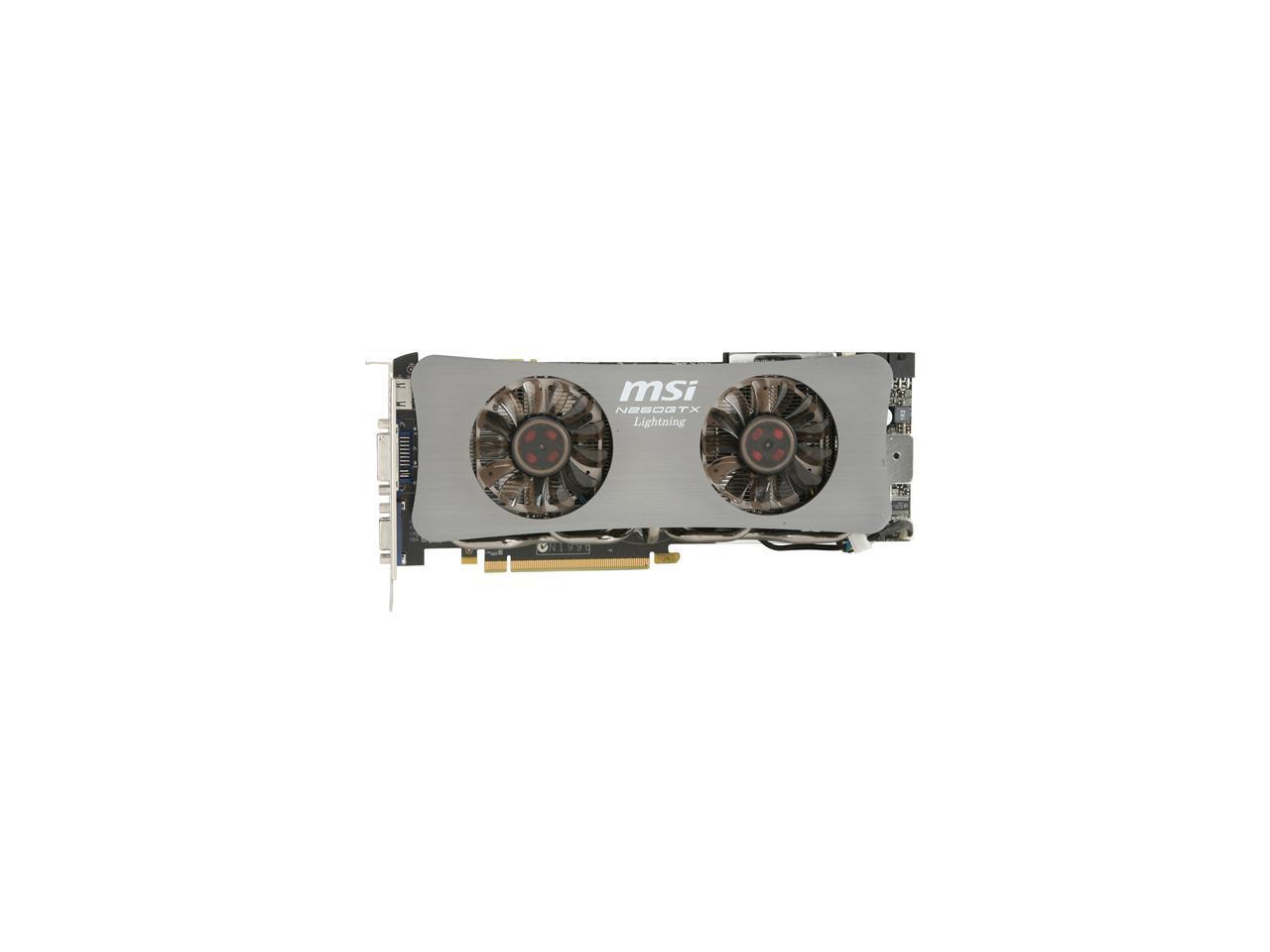 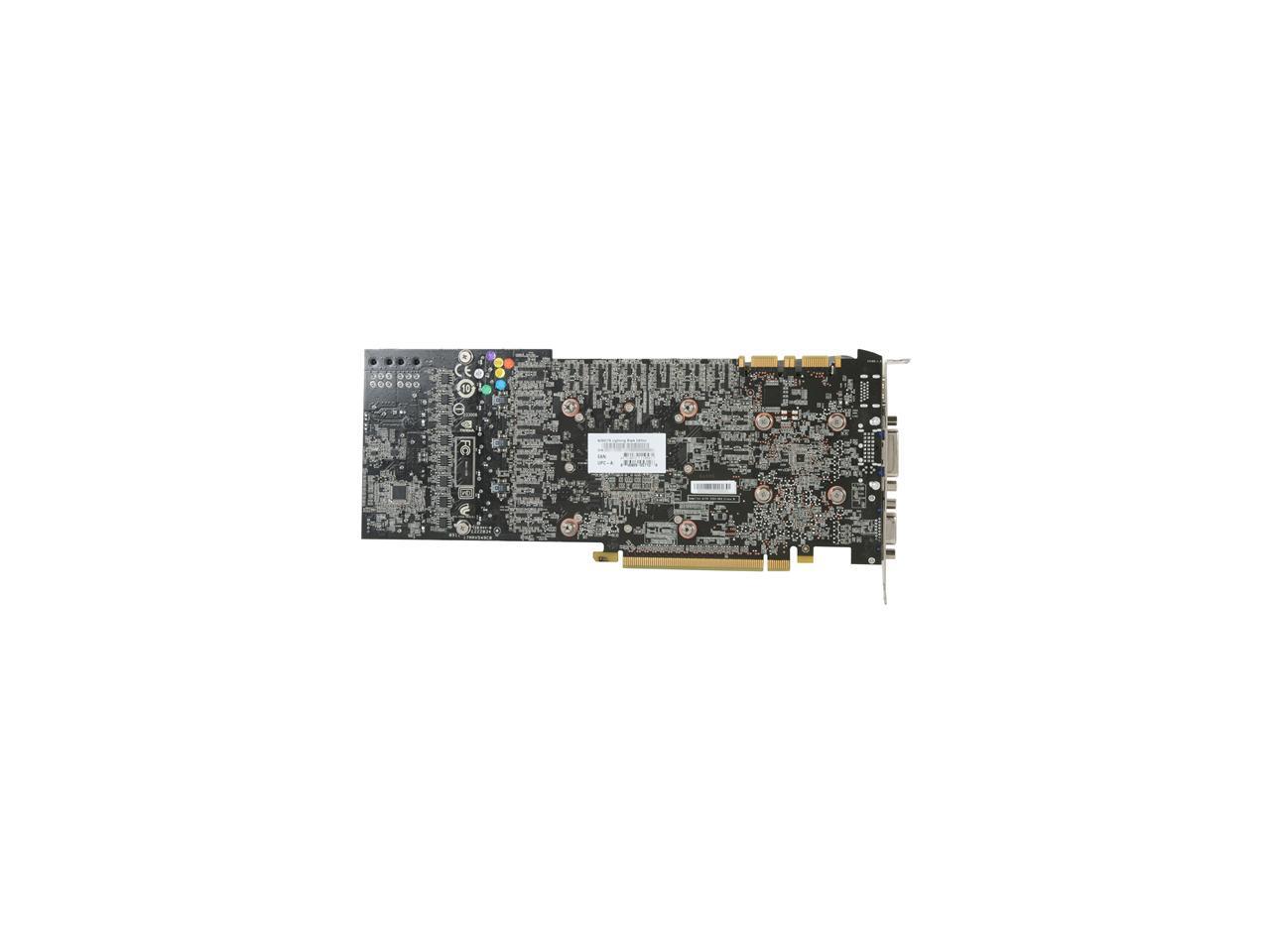 (10) Write a Review
OUT OF STOCK.
Overview
Specs
Reviews
NVIDIA's 200 series of graphics cards combines cutting edge technology and advanced capabilities together to provide best-in-class performance. The GTX260 boasts 2nd Generation NVIDIA Unified Architecture solution for all your most demanding graphic needs. It’s Microsoft Vista ready and equipped with a PCI-Express 2.0 interface. The GTX260 supports 3-way SLI to seriously crank your performance options by using up to three graphics cards to for insane flow rates.
The card's core clock runs at 655MHz, relieving your CPU of pixel crunching duty. Data surges through the GTX260's 216 stream processors fed by 1792MB of 448-bit 2100MHz GDDR3 memory. Twin dual-linked DVI and 400 MHz RAMDAC lets you display 2560 x 1600 resolution video and graphics on even the largest monitors, or output to your home HDTV via the HDMI connectors (DVI-to-HDMI adapter is included) for maximum flexibility. Built-in support for DirectX 10, OpenGL 2.1, NVIDIA's PureVideoHD, CUDA and PhysX-ready renders even the most intense environmental effects or HD DVD video with brilliant clarity.
The GTX260 delivers fluid frame rates and HD video with solid performance. If your motherboard can take it, the GTX260 can dish it out.

Pros: The card comes in a special “mimic sniper rifle case” packaging as MSI calls it. Well thought out, it’s a wrapped heavy cardboard box with a lid that opens to reveal their newest weapon. The box is lined in thick, die-cut rubberized foam. The pullout tray on the bottom has folded compartment lids for your manuals, driver disk, and connectors/adaptors. It is above and beyond what you’d expect, but once the card is installed, the case is just clutter. The card is just top quality and a beautiful component that is heavy, but has a very solid feeling. With plenty of milled aluminum and two onboard fans, it does feel like “military class product.” Fire it up and there is nothing but fast, amazing detail, that is so smooth, and straight out of the box with no over clocking of any component. The way a graphics card should run in the first place or it’s not worth getting.

Cons: What happened with the “Air Force” Panel? “Redefine the standard of top quality” is what it says. Panel is a flimsy piece of plastic with the worst designed mounting system. Can go on a desktop, but the extremely lightweight panel will slide away from you every time you touch it. Its’ unsightly USB cable sticks straight out of the top, instead of out of the back of the unit. Mounting the panel, first fight several minutes connecting the tiny connector on the internal cable, to an inside opening of the same size, in the back of the panel. Remove the cheap clear plastic screws from the plastic bracket and install it into the bay. I have a Tt Armor+ case with tool less bays, that won’t accept the bracket because it doesn’t slide in like a CD/DVD drive. Push the panel onto a little tiny catch piece that locks it in. Touch the panel to adjust settings, the catch lets go, and the panel falls out. Aggravated by this junk design, I can’t say if it works, but it fails in design.

Overall Review: The card does what it’s supposed too and for less than the latest and greatest gadget prices. Save a few dollars and don’t get the Black Edition Version. You’re really just paying for a fancy cardboard box that should be made out of metal, or maybe plastic, but usable for other things after the graphics card is removed if, it is really to be “special packaging”. Also, the panel could not have cost much in R&D to create. Lastly, MSI should send out an apology and offer to take back these “Air Force” panels, and then send back out a better designed unit. Mounted to an aluminum skeletal frame with metal screws or some other internal mounting system, is needed so it can just slide into a tool less bay or affixed by metal screws. Also, affix the external USB connector to the back of the unit instead, make the internal cable a little easier to connect, or have one connection point for either to use on the back.

Cons: *AirForce panel is a joke--don't bother installing it. If they would have done away with it and reduce price it would have been better for both the consumers and them. Please read other reviews about this panel to get an idea. *Supplied overclocking software doesn't seem to work on my computer--it shows up when computer boots up and then disappears not to return until the next bootup no matter what I do, even if I click on the icons initiating the program. *It's been a MONTH and still no news about my REBATE whether they received it or not--visiting their web site shows that the rebate is in the initial state = no confirmation of them receiving it. I would give them another month and then give up looking for it. Rebates are BAD NEWS for consumers! How many people DO NOT receive their rebates? ALOT. Many companies have lost faithful costumers based on such foolishness. Reduce the price $20 at sales point and keep the costumers or keep $20 for 2 month and lose a customer=SIMPLE

Cons: People who think that other people don't know what they are talking about.... ( YASHI ).... read...... high level of understanding....... I've been building computers for 10 years. Opine after you start shaving.

Overall Review: A week later and the card truly is useless. The XFX GTX260's with half the memory are much better. 640/2300. Why MSI or anybody would rave over this is beyond me. The memory runs too slow and it will not stay clocked higher after you make adjustments.... and it will not reach 2200. Inferior memory on the board IMO and Just a sly marketing ploy by MSI to make people want to buy it. My reason for buying it stated below...... to see if the extra memory would make a difference..... it doesn't !

Overall Review: The AF panel never did work right. Had to use Riva Tuner to over clock the card. Ran it 675/2200. Wolfenstein killed it.

Pros: Has extra memory. May have helped a little bit.

Cons: Mounting system for the control panel. First thing you want to do is get rid of the plastics screws. Installs easy from there. You supposed to be able to push the control panel in and then release it and it supposed to pop out. Doesn't. It gets stuck in the front bay housing. The card is severely under clocked...655/999. When you get used to using the control panel and make adjustments it doesn't stick and when you run gpu-z it still reads it as stock. I used an XFX GTX260..640/2300 with half the memory. It blows this thing out of the water. Gets loud sometimes. Not so sure the super duper cooling actually works all that great. it does work better than the XFX card but that doesn't say much. 2 days after I ordered it newegg gave out a rebate. Thought about returning it but you can only get a new card in it's place.

Overall Review: I wanted the extra memory to see if it actually would make a difference and it's not really noticeable. FarCry2 and Crysis played better on the faster card. This one won't over clock right and cant match the others performance. I was going to buy the newer GTX285 with the 2gigs of memory. That would have given me more performance over what I already had. Gonna have to call the egg and see what I can do about returning this DAWG !

Overall Review: USELESS does not understand that memory has several ways of being measured. Odds are high that when 1 source calls it 1000 and another 2000 they are using different methods and its the same speed. Research before supplying inaccurrate criticism. Check specs on here and on MSI website.

Pros: For the poster asking if this card would be a good work horse.. Just get a GTS 250 1gb. would be plenty for what you are running. Unless you are on a monitor at a resolution of 1920x1200 or higher but still even then would be decent

Cons: None. This is still a great card for gaming. I have the one with the red PCB

Overall Review: Great card.. Wish I would have known there would be a black version...