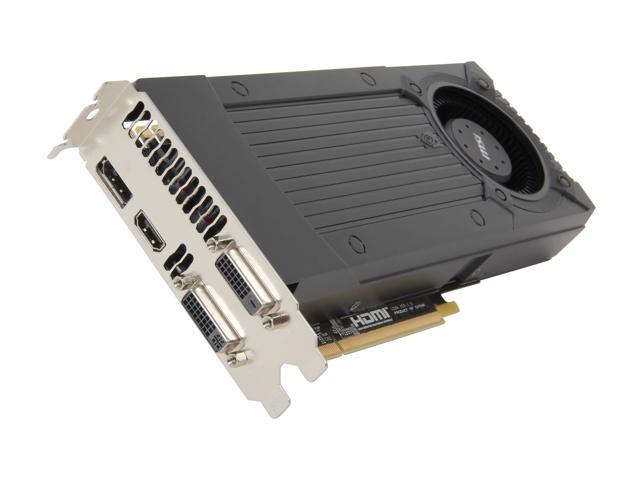 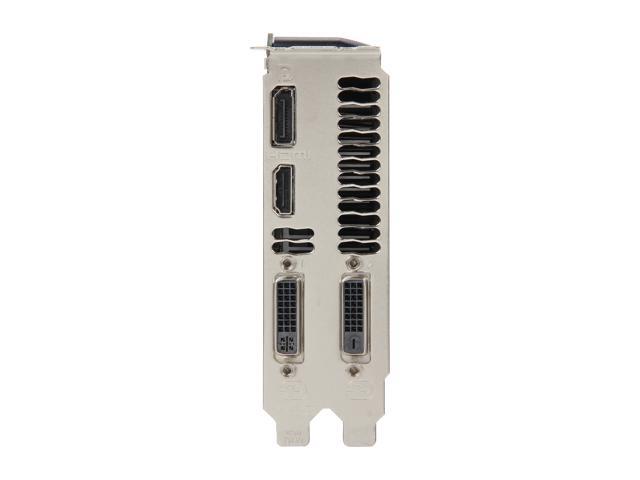 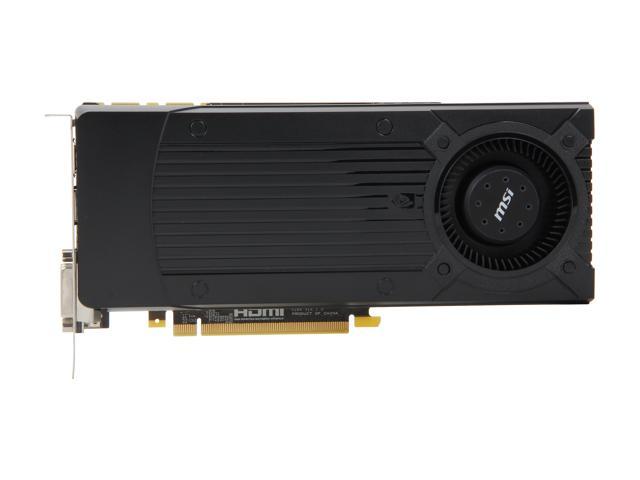 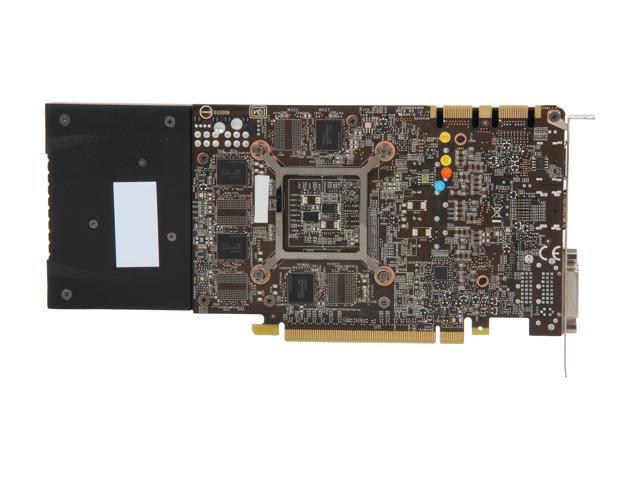 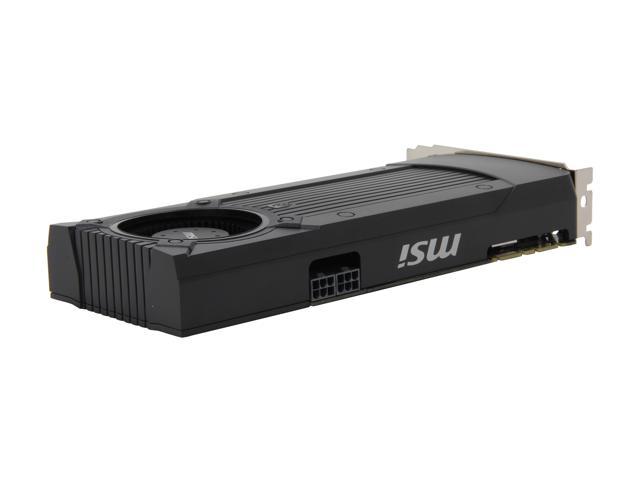 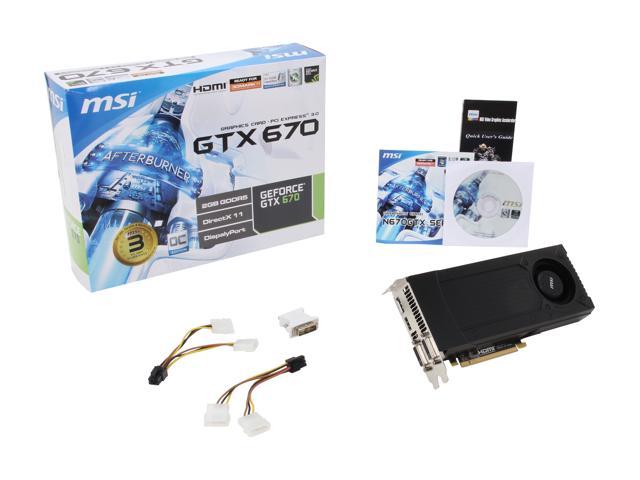 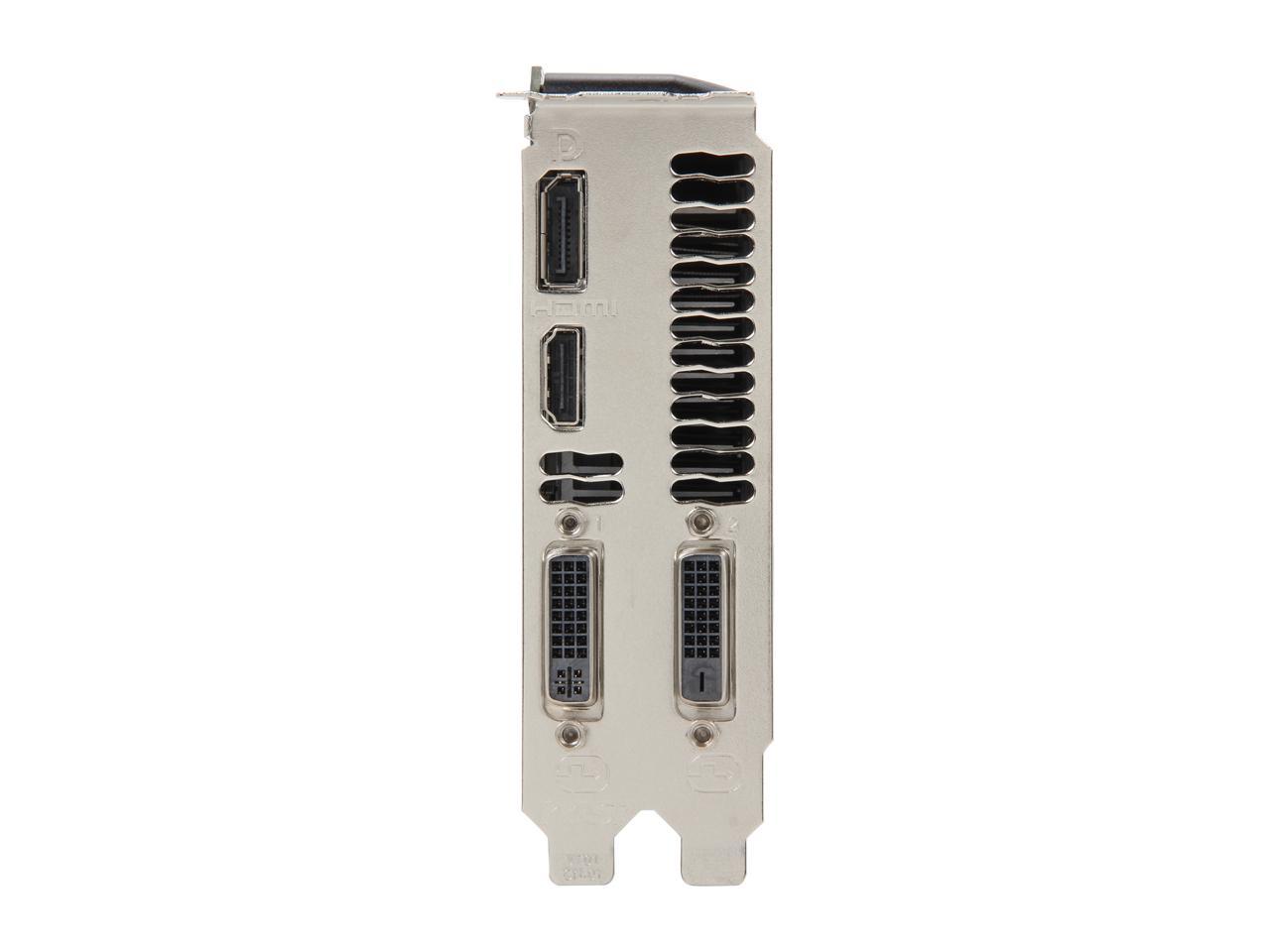 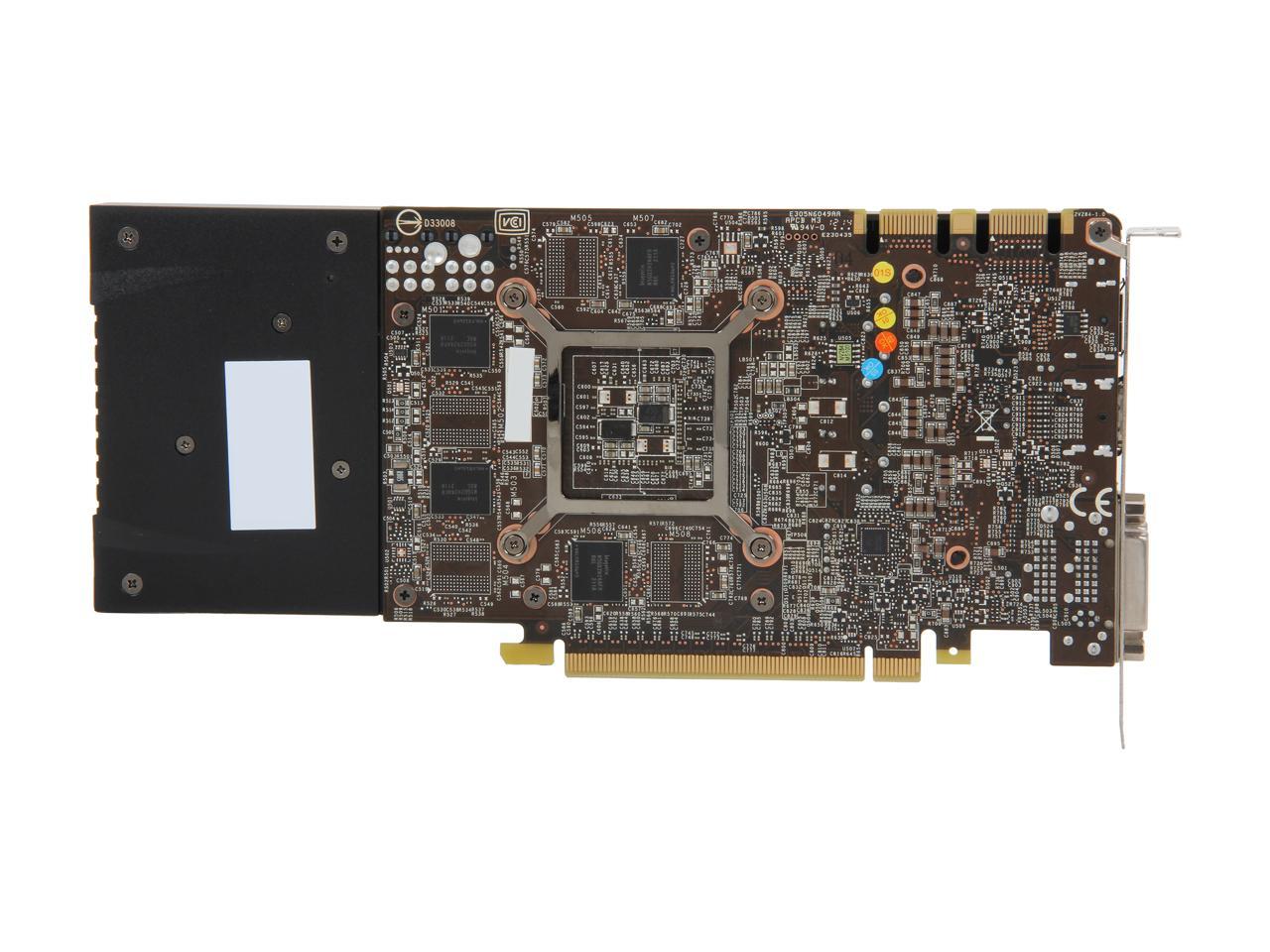 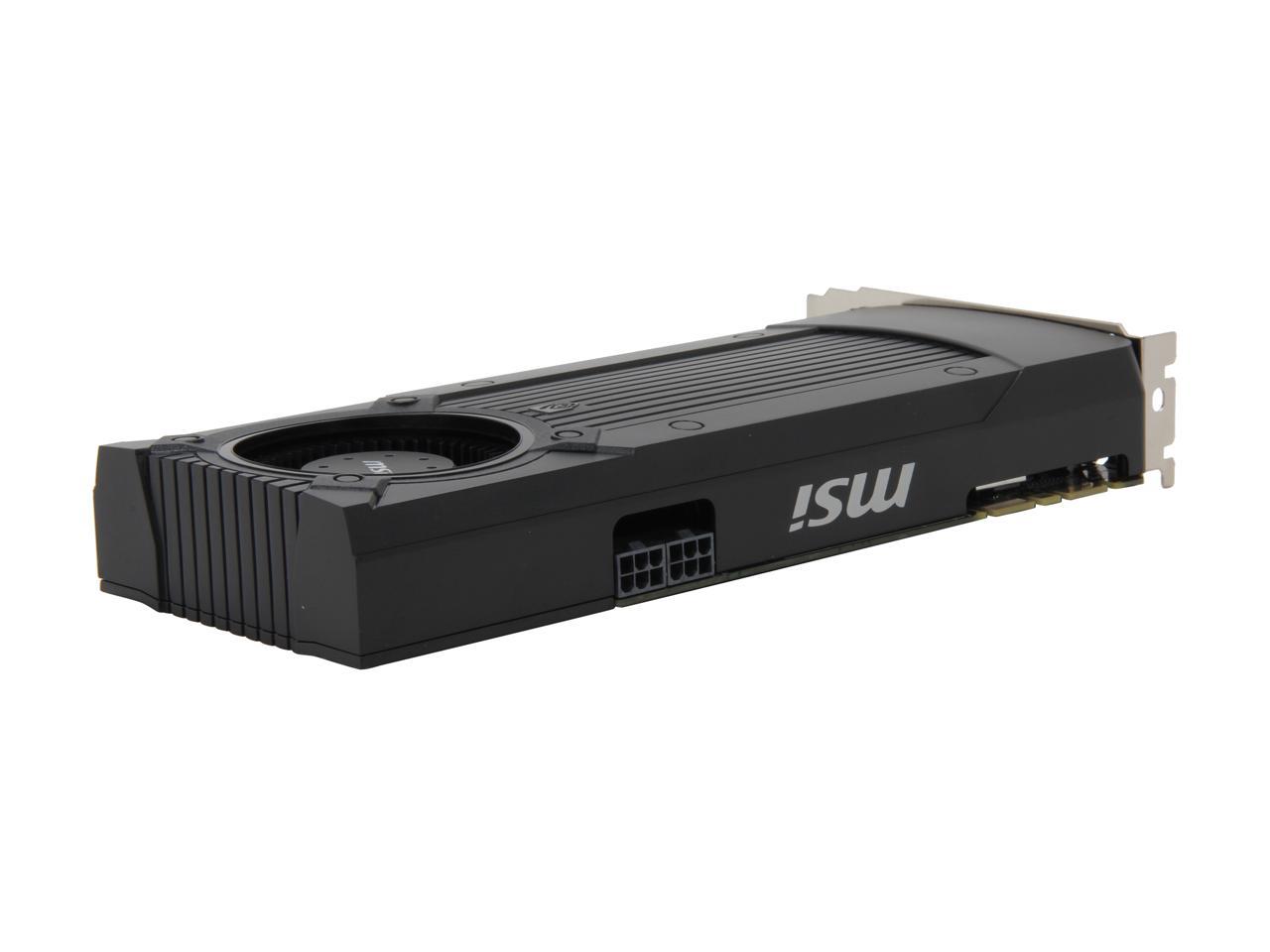 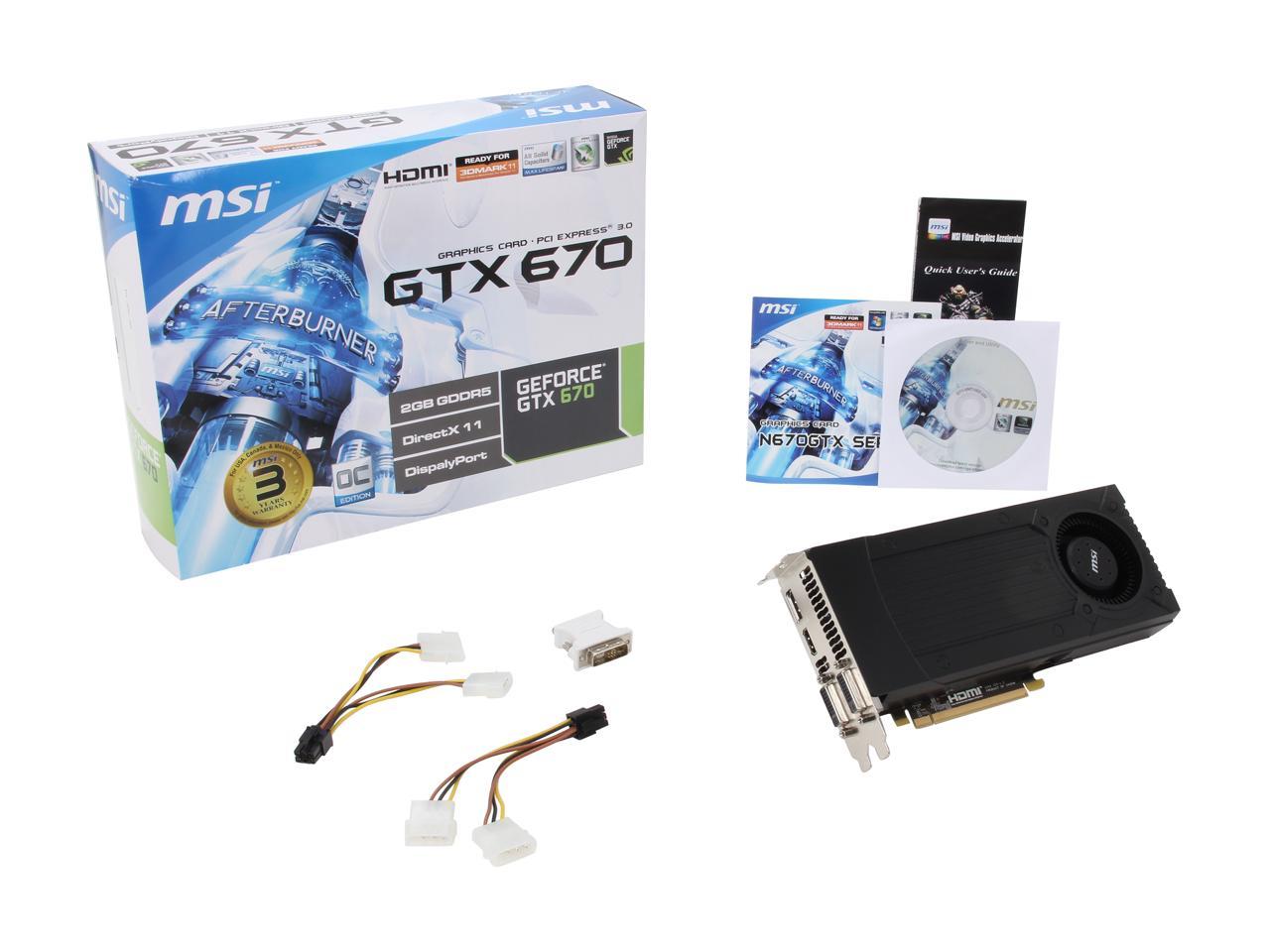 Learn more about the MSI N670GTX-PM2D2GD5/OC

Pros: This. Card. Is. A. Beast!!! Ran a good deal of benchmark tests, and I'm consistently getting only about -5% to -8% performance when put up against the (significantly more expensive) GTX 680. That is INSANE. Coupled with an i5 3570k, this card chews through Skyrim maxed out like a fat kid through brownies, makes Battlefield 3 never drop under 50 FPS, and slaughters Borderlands 2 in a total "come at me bro" kind of way. Some folks say that this card is a tad loud...but what they don't say is that if you put your ear down next to your case, you can hear that it's actually laughing at your games' system requirements.

Cons: It's slightly factory overclocked, but unfortunately because of it's reference model design, it's nigh-impossible to push it further without running into stability issues. Runs a tad hot on it's own, but if you have a couple of case fans trained on it, this is basically a non-issue.

Overall Review: MSI has never steered me wrong, and this card is continuing the trend. The plastic shroud is total reference design, and while MSI has better cooling options with their Twin Frozr II, III, IV aftermarket coolers, this thing still never gets all that bad temperature-wise. Highest I've seen it is mid 60's, and that was with Unigine Heaven running full bore.

Pros: This card provides awesome performance in all of today's games. I was very worried about what I have been reading lately with respect to the GTX 670 reference card fan noise. I am happy to report that this card is very quiet at idle. I do not here it above my case fans.

Cons: Unfortunately, the fan noise does start to get pretty bad at speeds above 55%. It wouldn't be so bad if it was simply an air movement type of sound. But instead it is a very mechanical sound that is annoying and out-of-place among the normal fan noise that comes from my pc. Hopefully, the fan will stay under 55% for most of my gaming. Due to the somewhat cheap-feeling cooling solution in the reference design, I am deducting one egg from the score.

Overall Review: This card provides great performance for the price. If you are at all concerned about fan noise under load, I would consider one of the custom GTX 670 cards that offer better cooling solutions. If I was not limited to cards that are less than 10.5", I would've waited on the Gigabyte brand. Overall, I am very happy with the card.

Pros: Runs Skyrim in Ultra @ 1080P pegged at 60 fps (vsync). Works with my 3D projector (720p unfortunately). Not noticing the noise issue, but my machine isn't silent to begin with.

Cons: Big, but that is to be expected for a high end card.

Overall Review: This card looks exactly like the reference card in reviews. Wish I had sprung for a 120Hz monitor.

Pros: This is a very good graphics . It is very quiet and runs very fast. I have two monitors connected to this card and when running flight sim I have windows on both monitors at 1920x1200 resolution, the card is so fast that the simulation is as smooth as glass.

Cons: Do not install the demo programs from the installation CD . They will result in the "Red screen of Death"

Overall Review: I swapped this card with a GTX 7800. After swapping in this card, I installed the a couple of demos from the instalation CD and after that l both of my monitors went red. My monitors would come back to normal and turn red again at random intervals. Getting another card after the RMA did not help. I had to reformat my drive install the latest BIOS, reinstall OS and update to the latest drives and now the card is working great. Even though it took a lot of time to resolve this problem, I received very good support from MSI Technical Support Team at the end.

Cons: As mentioned by others, the fan is loud at full load. It seems cheaply made for a top end card. At this price I expected better.

Overall Review: I kind of regret not waiting for one of the non-reference models. They seem significantly quieter for about the same price.

Pros: Roughly 8% less performance than a reference GTX 680. Relatively good price. Plays pretty much anything at max with all eye candy cranked up.

Cons: I got 3 defective units... Read more below. I would buy GTX 680s, or if you can't afford those get EVGA GTX 670's because they were giving upgrades to 680s for defective units. I don't know if they still are, but I wish I went with EVGA. (This is the FIRST time I have had a problem with an MSi product, and I do still support them-Because of one staff member and his ambition to satisfy an MSi customer. Read more below.)

Overall Review: So, i ordered a pair of these back in October of 2012. It's now March of 2013 and I have gone through hell with these GPUs. The original pair I ordered from NewEgg had some bios issues, and it couldn't communicate with the memory. So, I kept getting that "Red Screen of Death" that a lot of 670 owners have been experiencing. (google GTX 670 RSoD and read about the theory that Nvidia damaged a large number of GPUs by severing a processor core on the GK104 chips.) I bench tested both GPUs on 4 rigs. 2600K on Asus P8Z68V-LE, 3570K on MSI Z77A-G45, 3770K on Gigabyte G1 Sniper 3 and AMD FX 4100 on Asus Sabertoooth 990FX. All rigs experienced problems with both GPUs individually and in SLI on Windows 7, and Windows 8. I RMA'd them out to MSi in CA, and dealt with Henry. He was fantastic. Very caring about the issue, and was ALWAYS polite. If you ever have to deal with MSi USA's RMA dept. Go with him if you can. He's awesome. More on why further in. So, the first RMA was in November of 2012. The test team in CA found "Nothing wrong with either card" despite my own test results and notes that were given to them. Oddly enough, both GPUs ran through Kombustor, Heaven, 3Dmark 11, and Furmark without a hiccup. It was only when the GPUs were in game that the RSoD would happen, which I made sure to tell the folks over there at MSi so they wouldn't waste their time on that. Regrettably, they tested with the former mentioned Benchmark software. Why? Standard procedure. Okay-fine. I got the cards back, tried the new Nvidia drivers that released while they had the cards. Nothing worked. By this point I had tested each card with 4 different drivers-individuality and in SLI(3), on all 4 systems on Windows 7 and Windows 8. That is 96 tests(4x3x4x2=96), and at this point, one card worked on the AMD system with most recent drivers on Windows 8... but that's not the system I built for these cards... that was the system I built for a friend. I RMA'd them out again... same thing happen. So now we're setting up the 3rd RMA for the same problem. Finally, talking with the guy mentioned above, Henry, he said "You know what? Lets just swap them out instead of shipping them back and forth." So, he put word in that they needed replaced. Cool. Finally, on the replacement cards. Refurbished, as usual. I don't expect a brand spankin' new card. Nobody ever gives a brand new GPU-Sadly. One of the GPUs was wonderful. I love it. It's the system now as I type this. (Just spent like 14 hours playing Tomb Raider on it.) The other GPU looked like the guys in the warehouse got drunk and played Hot Potato with it. The HDMI port was damaged, there were scratches all over it, and the I/O Bracket was dented. So, I emailed Henry, and he was quick to reply with a shipping label and another RMA, and in this one it said that the replacement is to be sent to him for testing before shipping. The GPU arrives in CA today, and hopefully I'll have the FINAL replacement in two weeks.

Cons: I am now RMAing My 4th card back. These Cheap thieves send you used cards that have been returned because of issues as replacements, There service department doesn't have the collective knowledge to replace a heat sink and all returns are sent to Taiwan for refurb certification by there MONKEY squad and then sent right back to there victims as replacement cards hoping you will just go away. I tried these cards in 3 separate computers all of which have ZERO issues with other name brand cards. Look on line at all the horrible reviews MSI is getting...BUYER BEWARE, This company makes a TERRIBLE Product and backs it up with HOT AIR !!!

Overall Review: " I WILL NEVER BUY ANOTHER MSI PRODUCT"

Manufacturer Response:
Dear Valued Customer, We apologize for the issues that you are having with this product. Please contact us at usreview@msi.com with your previous RMA# so we can look into this issue and get it resolved for you. If you have any questions or concerns regarding the product, please do not hesitate to contact us directly at usreview@msi.com and we will be more than happy to assist you, thank you. Best Regards, MSI Review Team | usreview@msi.com