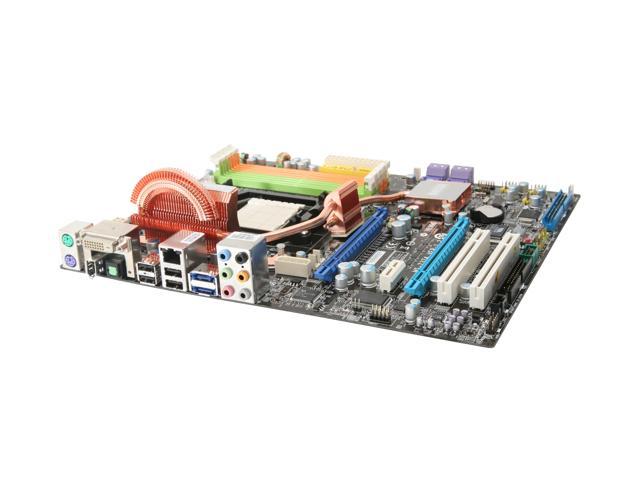 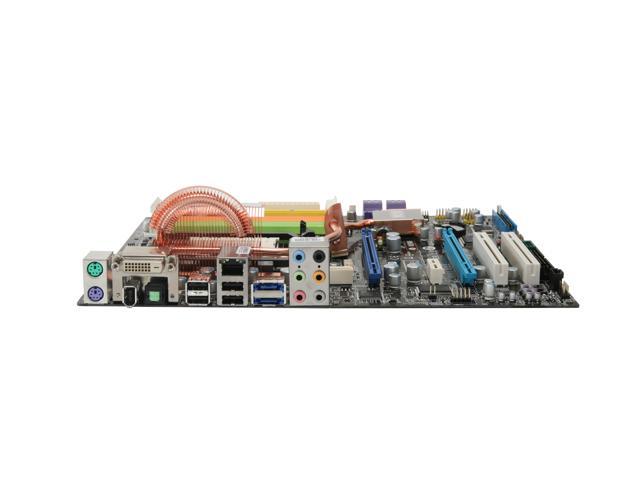 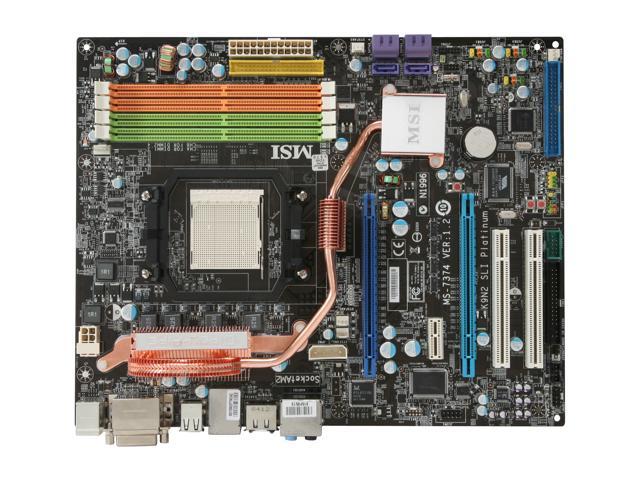 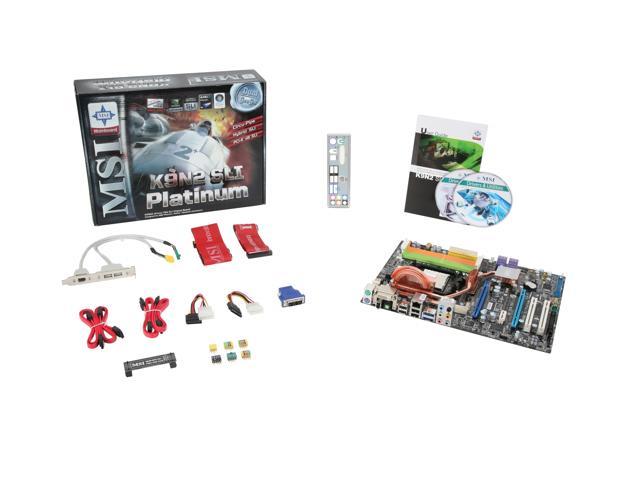 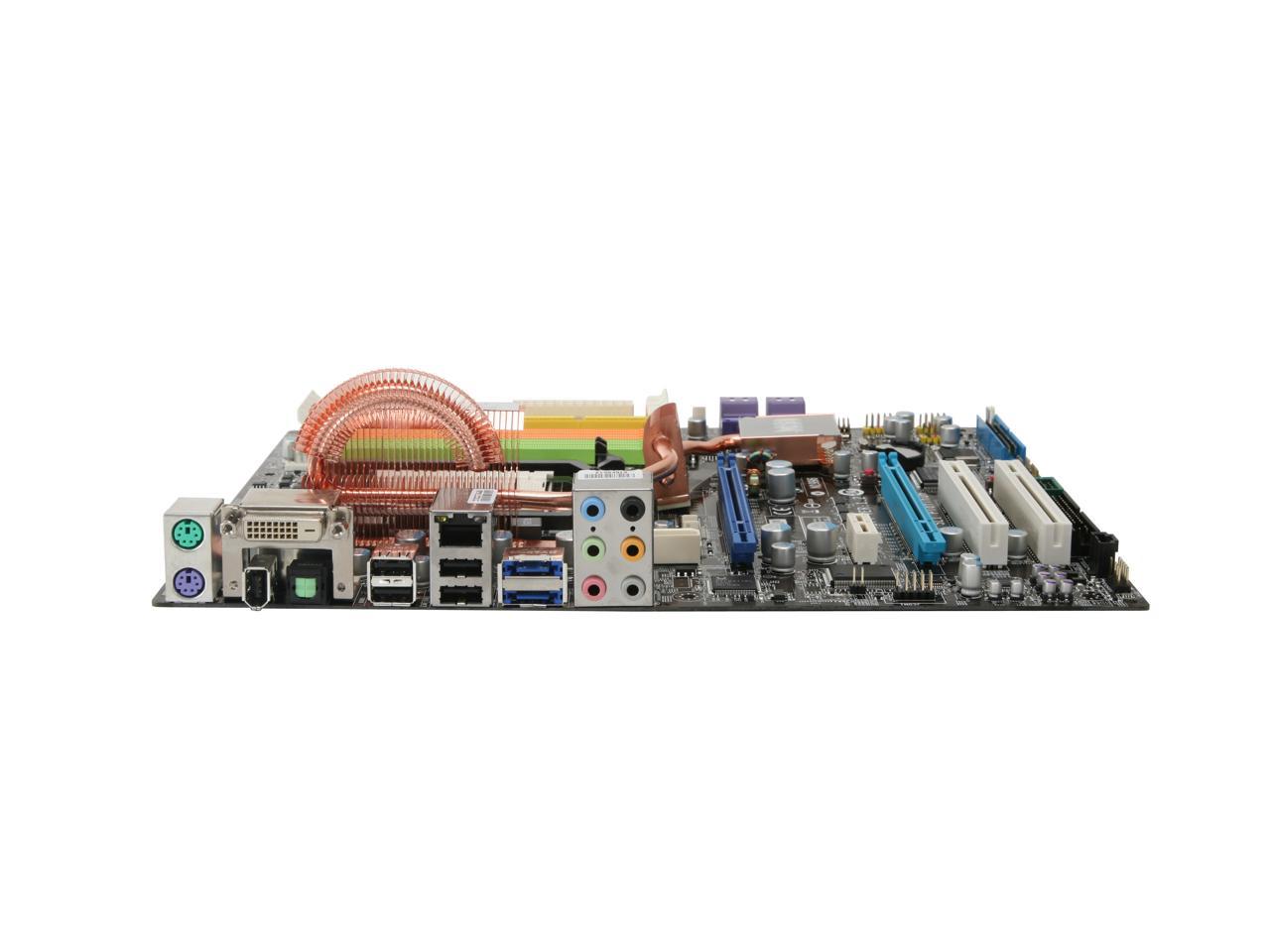 (216) Write a Review
OUT OF STOCK.
Specs
Reviews

Cons: Well the 9950 came and the 140 watt cpu works just fine even though they say they are testing and yet advertise this as a 140 watt board.

Overall Review: I also bought these for multitasking and boot time is nearly half as long. I megatask in a computer business where time is literally money. This badboy has earned my respect. My oldest son has a 9850 and as a gmaer it garnered his attention. Since I only do it part time I didn't put my money into the card. I recommend to anyone a good 2.0 card along with this board and cpu will be amazed. Recommend the 4850 1gb saphire, or 4870 for the K9 Platinum 790Fx guys, or for this board the GTX 260/280 series. My experience with the 8800 gt was amazing for the money. Enjoy.

Pros: Worked perfectly with my AMD 9850BE and four 2Gb sticks of Corsair -- even ran at 1066. It seemed to run pretty cool. The build quality seemed good.

Cons: I had a problem when I upgraded to the AMD Phenom II 940. Even with the latest bios, at least some of these MSI boards default to vcore = 1.8V for that proc. This is a dangerously high voltage, but you can race into the bios and change it downward. I'm sure MSI will fix this in a later rev.

Overall Review: Some here haven't seen the 940 Vcore problem (or don't know they have it), but have a look at the MSI forums - search "K9N2 SLI platinum - another problem w/ Phenom II " My CPU shot up to 80C before I realized it was running at 1.8v. I sold this MB rather than RMA because I already removed the UPC for the rebate. Lesson: avoid rebated motherboards or wait the full 30 days of test and burn in before removing the UPC if the rebate allows it.

Pros: Before I bought this board I downloaded the pdf manual to check the features of the bios. Both the pdf manual and the manual I recieved with the board I actually bought, both say there is an option to disable the intergrated video. But with the 3.1 bios that the current board is shipped with there is not an option to disable the onboard video, only an option enable or disable SLI.

Overall Review: I don't review a product that I don't own or have first hand Knowlege of. This is a good stable board but the way MSI is handling this bios update sort of sucks. My contact the MSI tech support to resolve my problem was very quick (via phone) and informative. But it was a call that I should not have needed to make.

Pros: Passive cooling so you don't have to worry about a tiny fan going out and having your chipset over heat. Very stable and very configurable. Works with a wide range of CPUs from AMD. Attractive board for those with window or plexi cases. Comes with little header blocks for all those front panel connections that are so annoying to plug into the board so installation is very easy and quick. Plus you can remove the board without disconnecting those plugs and just simply replace them to reinstall. Built in video that is low nVidia 8000 class in performance. Also gives you a backup video output if your main video card goes bad. Good instructions. Two standard IDE connectors as well as SIX SATA channels so you don't have to get SATA right away if you don't have it. Great set of diagnostic LEDs on the board to tell you what's wrong if you're having an issue. Plenty of needed cables and such. Great board to use for a surfing machine, home theatre, OR gaming machine. Very flexible!

Cons: For some this won't be a con but the on board video does NOT support analog out signals so you HAVE to use a digital monitor with it (ie: LCD) The video connector is a DVI-D (for digital) so you cannot just use a DVI-VGA adaptor and run your regular old CRT monitor. I had to purchase a DVI-D cable for my monitor from a local shop so it wasn't inexpensive like it would've been from NewEgg. The board does come with an DVI-D to HDMI adaptor so if you have HDMI there's nothing to worry about. RAM has to be low voltage so I recommend g.Skill with a voltage range of 1.8volts - 2.0volts. Just keep this in mind when spec'ing your system.

Overall Review: When building my new machine I had a very limited budget to work with. This board with it's built in video allowed me to skip the video card right away and still have a usable computer with MB, RAM, and CPU, with the case and power supply and drives I already had. I've had the machine up and running for a few months now and I just ordered a Palit 9600GT 1Gig video card today to complete this rig. MSI K9n2 SLI Platinum 2x 1gig of g.Skill (PC2 6400) AMD Athlon 64 X2 5000+ Brisbane XP Pro Never regretted the purchase and NewEgg was great as usual!

Pros: runs great and fast, had trouble with finding xp64 drivers but foudn them link: http://www.nvidia.com/object/nforce_730a_710a_winxp64_18.11.html

Cons: none, runs cool ( atleast in my setup, alot cooler then other peoples)

Pros: This motherboard has alot of things going for it... solid MSI construction (my 2nd MSI mobo), lots of cables, very well labeled motherboard connections, handy clear-CMOS button, dual PCI-E etc. Also has some nifty overclocking options in the BIOS, and some useful problem LEDs. Basically performs exactly as I expected it to; very well (aside from the issue described below). Seems to stay reasonably cool, and of course the MSI utilities like Dual Core Center and Live Update are nice. Has some cool multi-colored LEDs for mood lighting. Also works beautifully with a 140W Phenom 9950 BE on the v3.1 BIOS, and contrary to other reviews, I was able to disable the onboard audio and video without any trouble in the BIOS.

Cons: Manual is OK and has a nice fold-out map, but the section on the BIOS is terrible. It doesn't really provide any info you can't glean from the name of the option. This made it frustrating when I was troubleshooting an issue; I was able to POST on first power up, but for some reason it would not attempt to boot from any device (DVD or HDD) regardless of the boot sequence. I fiddled with settings, and I eventually was able to boot and install Vista off the SATA DVD (but only after I added an IDE DVD to check if the new SATA DVD was bad, which it wasn't), but when I disconnected the IDE device, I had the same no-booting problem. I resolved the issue by changing the SATA DVD from 2 to 3 (HDD on 1, and ports 1/3 on same connector). I don't believe this was a hardware failure problem since SATA port 2 worked fine to install Vista. I think there is some kind of boot conflict with two SATA bootable devices on different mobo connectors. Since I moved DVD to port 3, everything has been gravy.

Overall Review: I can't comment on the onboard Audio or Video since I disabled them up front.

Pros: ive only had i week and only had 1 day to tinker with.got it and installed vista without a hitch.i have Phenom 9600 black edition and overclocked using cpu multiplier to 2.6 ghz. with ati 4850 got 11600 bench on 3dmark06.played crysis on high settings no lag.everything was working too good to be true.when i get back home from over th road trucking im going to play more with bios and get it up to 2.9 ghz.the board has pretty blue led lights on each slot and light up when you put in vid card ect.also has 4 leds that on boot up blink red and green in code and then all 4 green if no errors.manual explains codes.also has power and reset buttons on board.pretty cool features.got all 5.9 scores on vista ratings.

Cons: none yet but time will tell

Overall Review: i believe for a quad core set up i got the best bang for the buck.for $550.00 i got 4 gigs ram Phenom 9600,ati 4850 and this motherboard from new egg on preferred account no pay six months.am i dreaming lol

Pros: Feature rich board. This board is capable of alot of cool tricks. Just have to know how to set them up. Nice BIOS, very modernized looking.

Cons: Board is rather thin making adding ram and plugging wires in kinda scary if your not carefull.

Overall Review: FIX ADVERTISING 1066GHz RAM WITH THIS BOARD!!! CAN ONLY USE 1066GHz RAM WHEN RUNNING AM2+ CPU. BOARD ACCEPTS AM2 AND AM2+ PCU!! PAY ATTENTION TO THIS