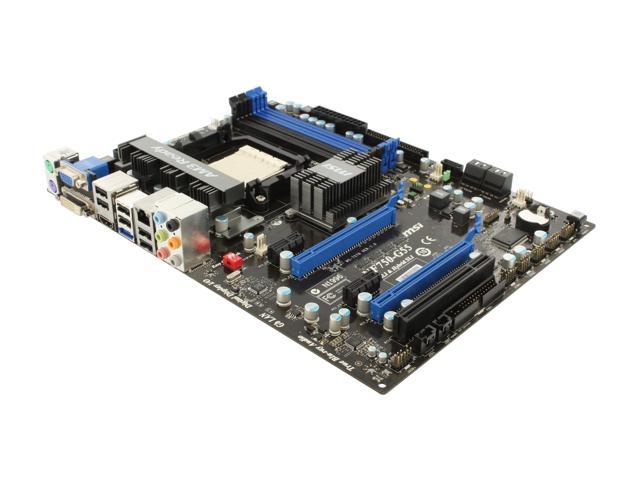 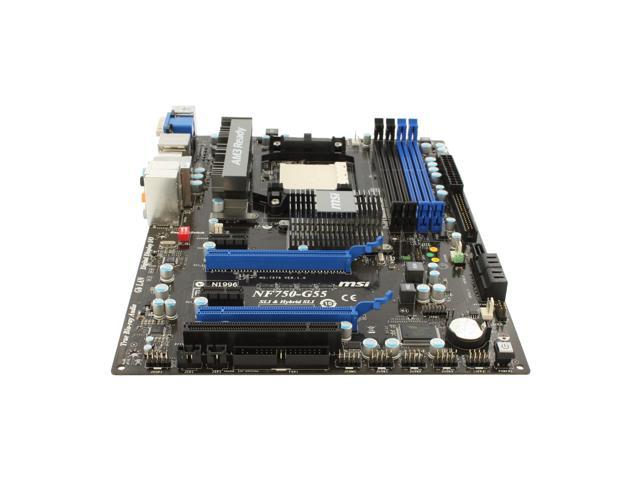 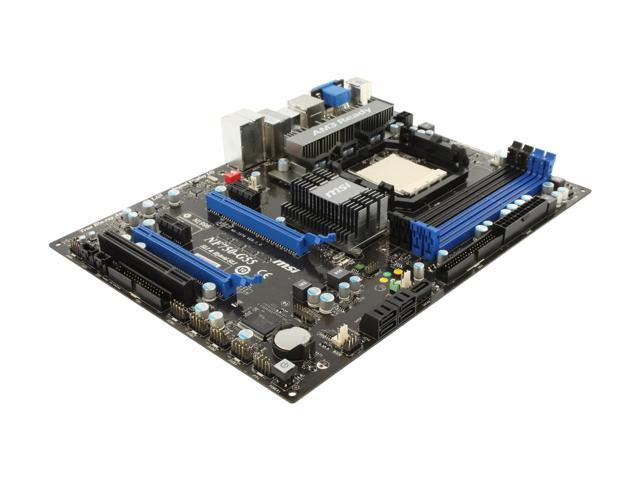 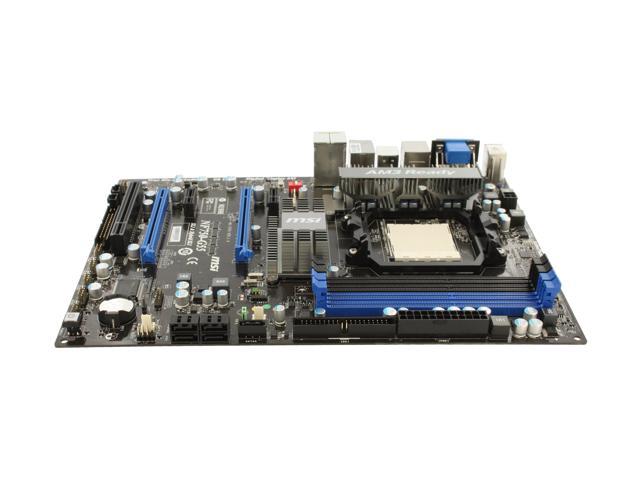 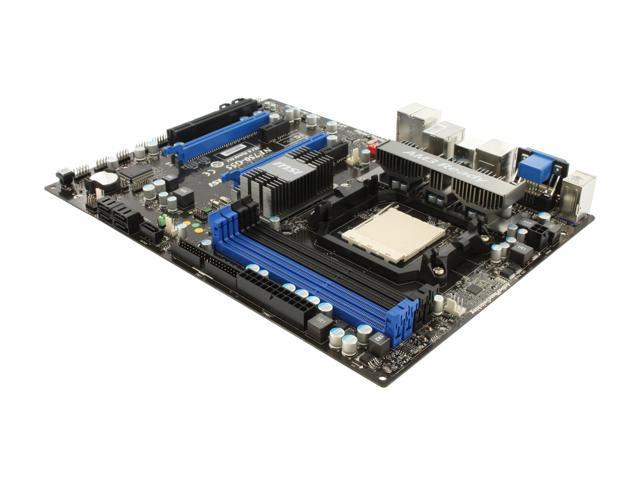 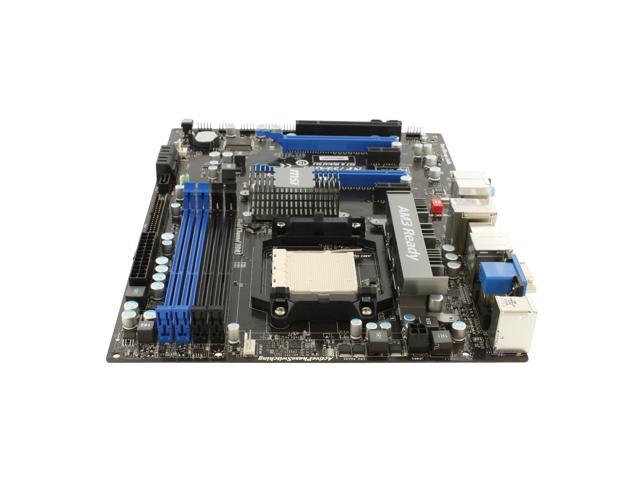 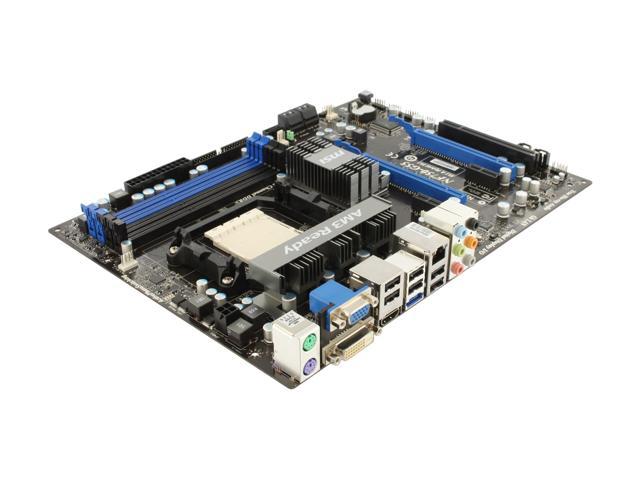 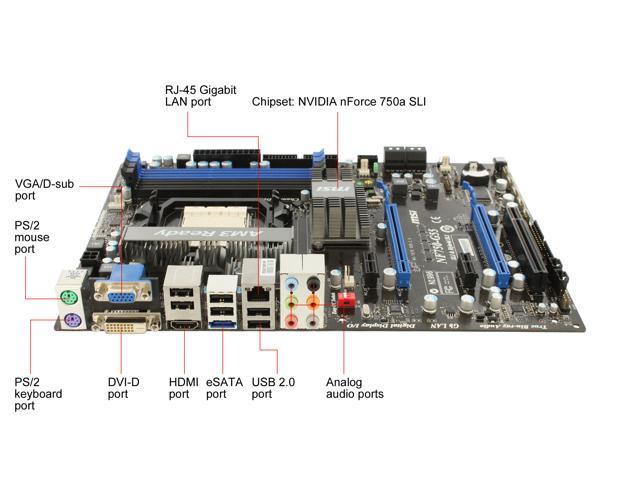 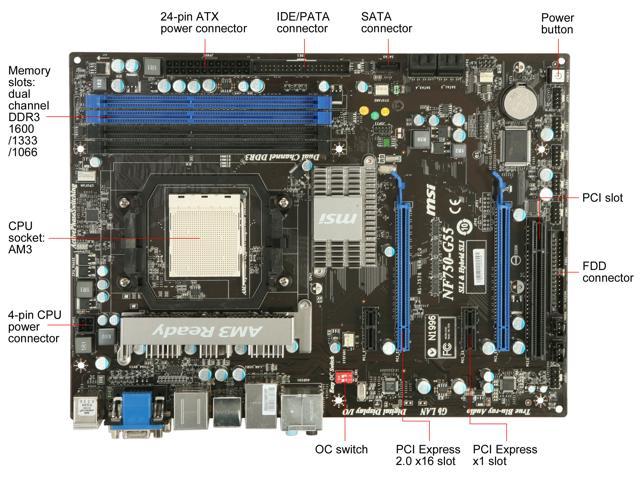 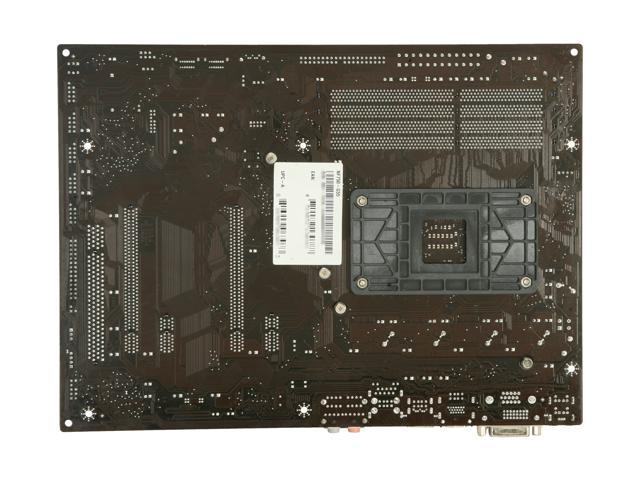 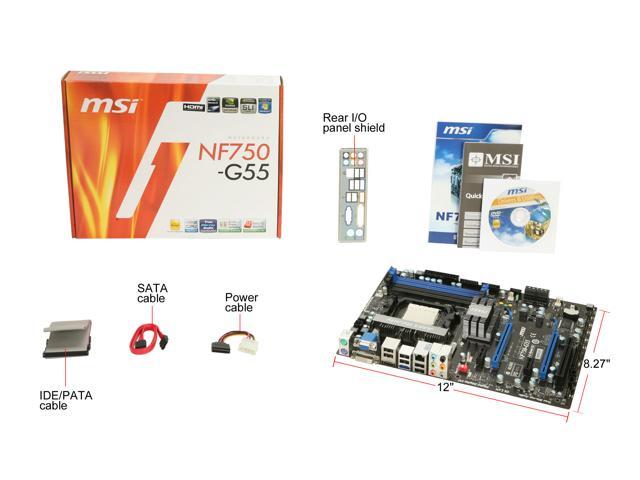 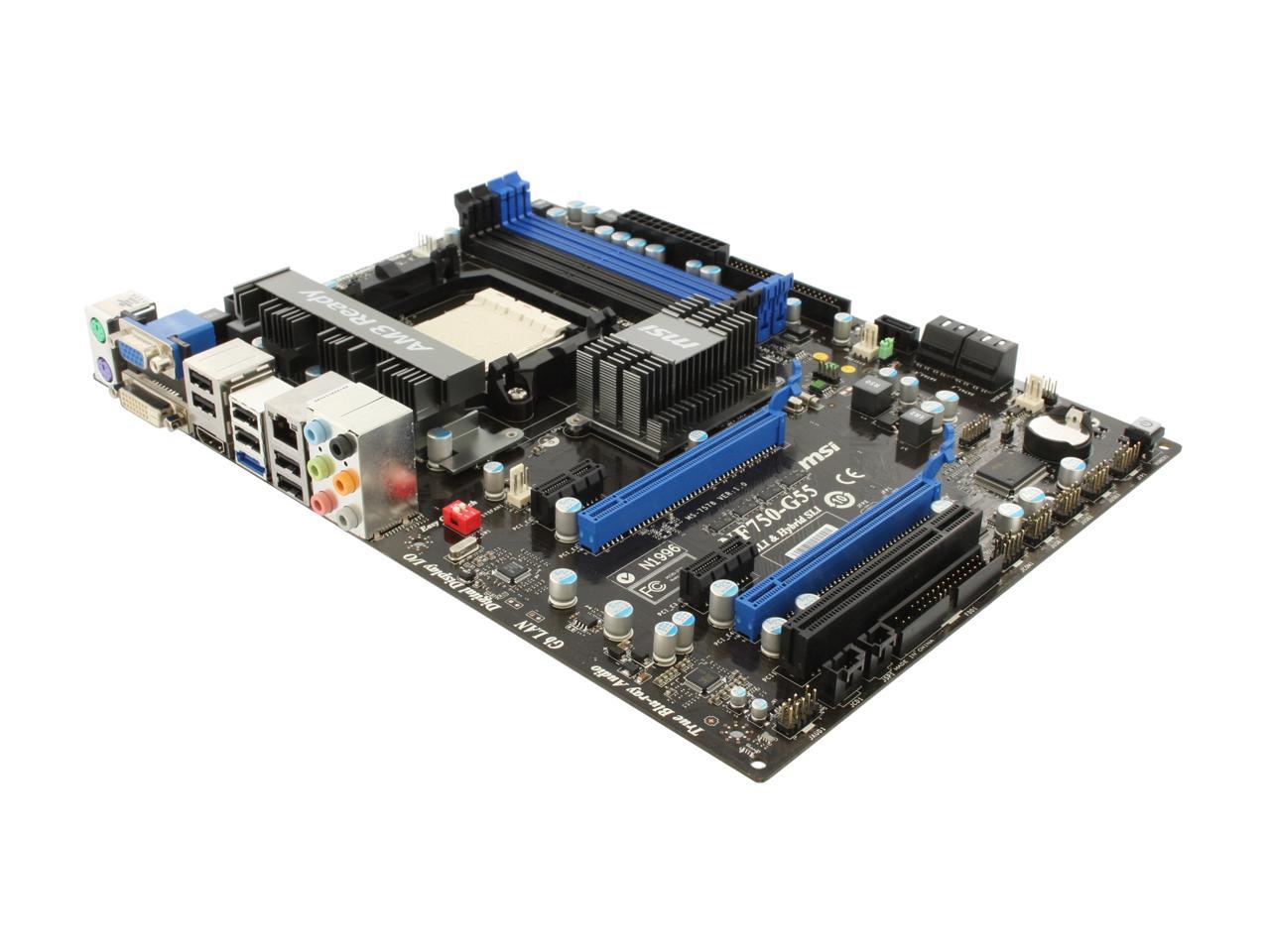 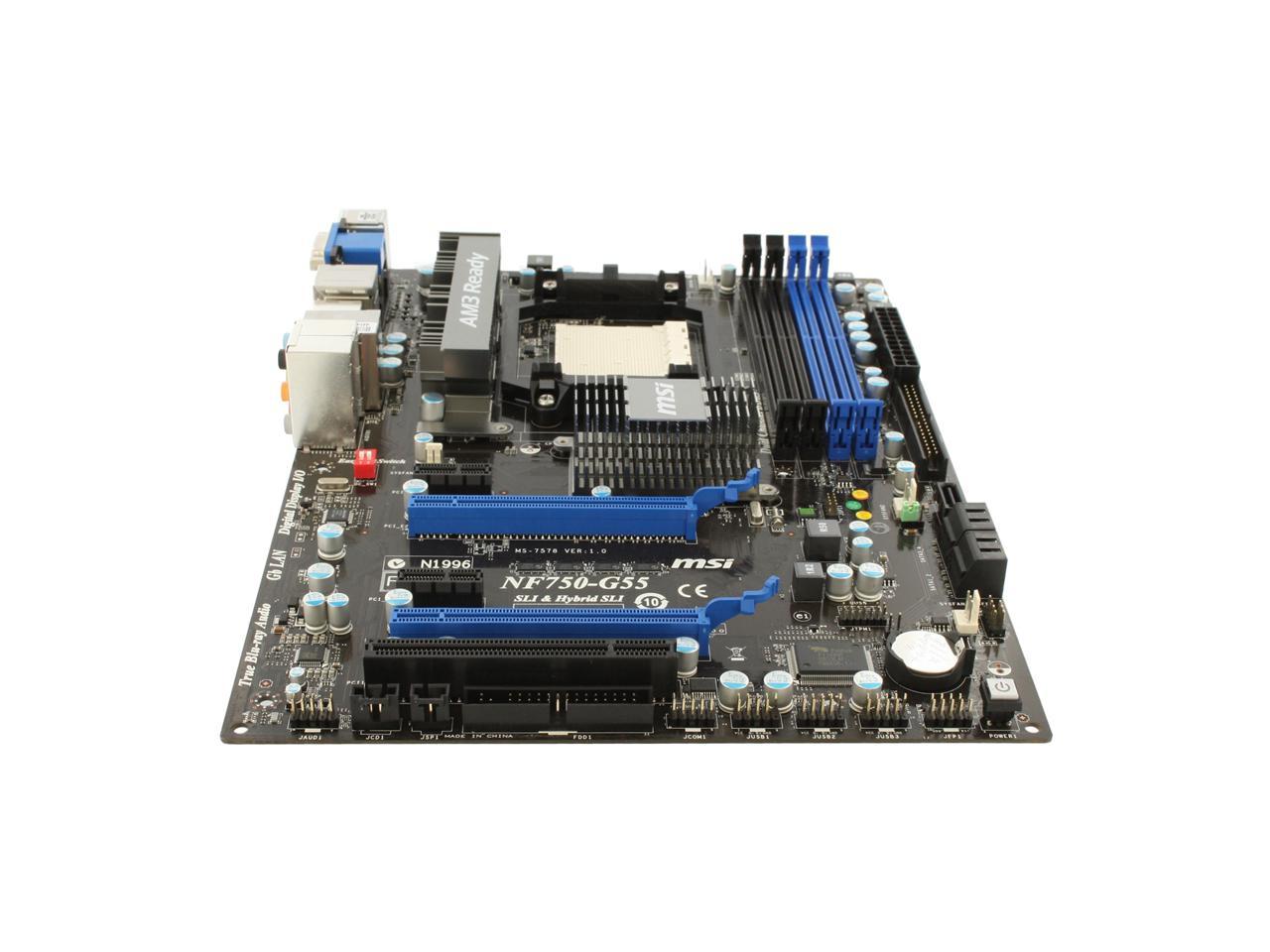 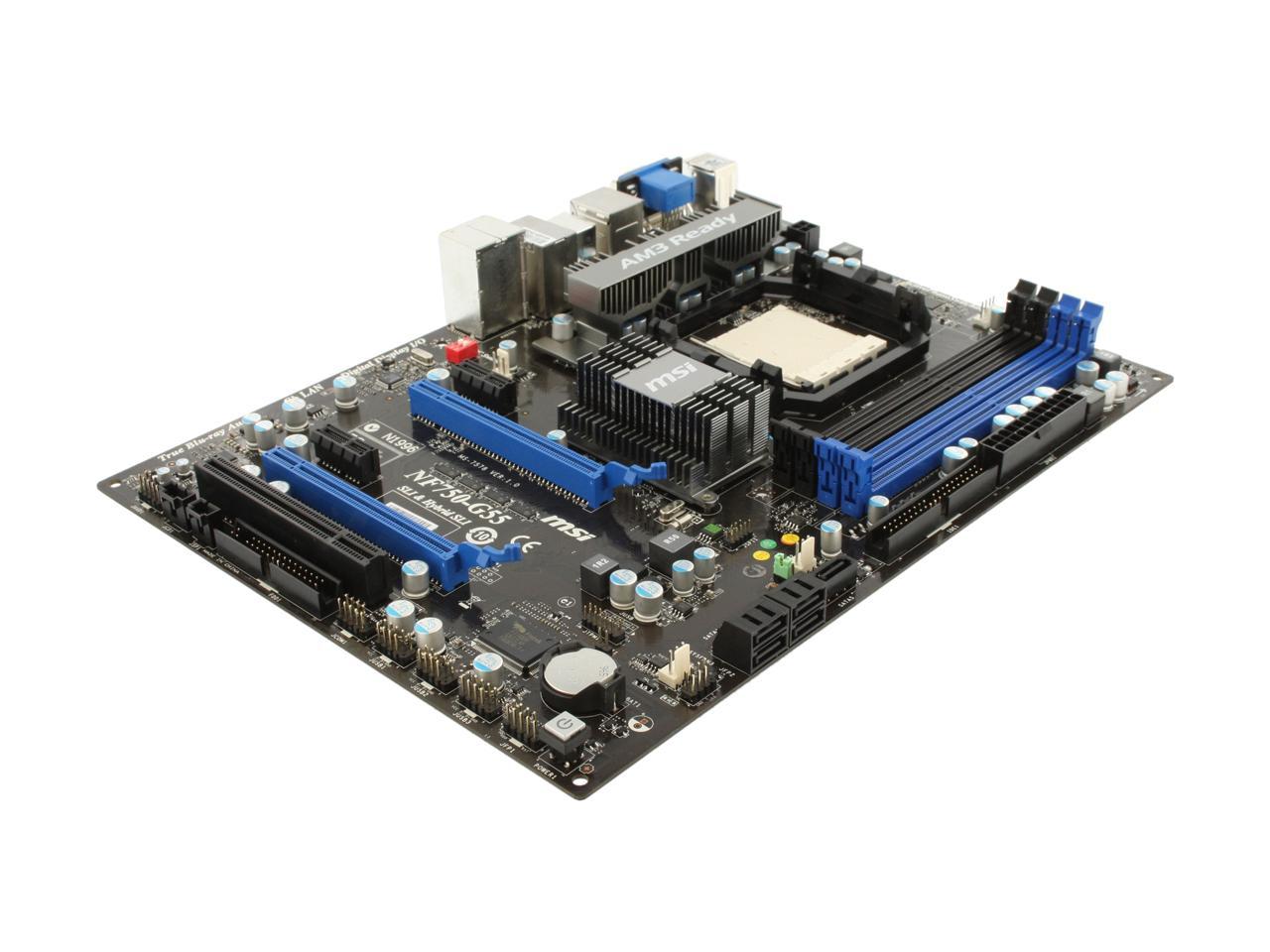 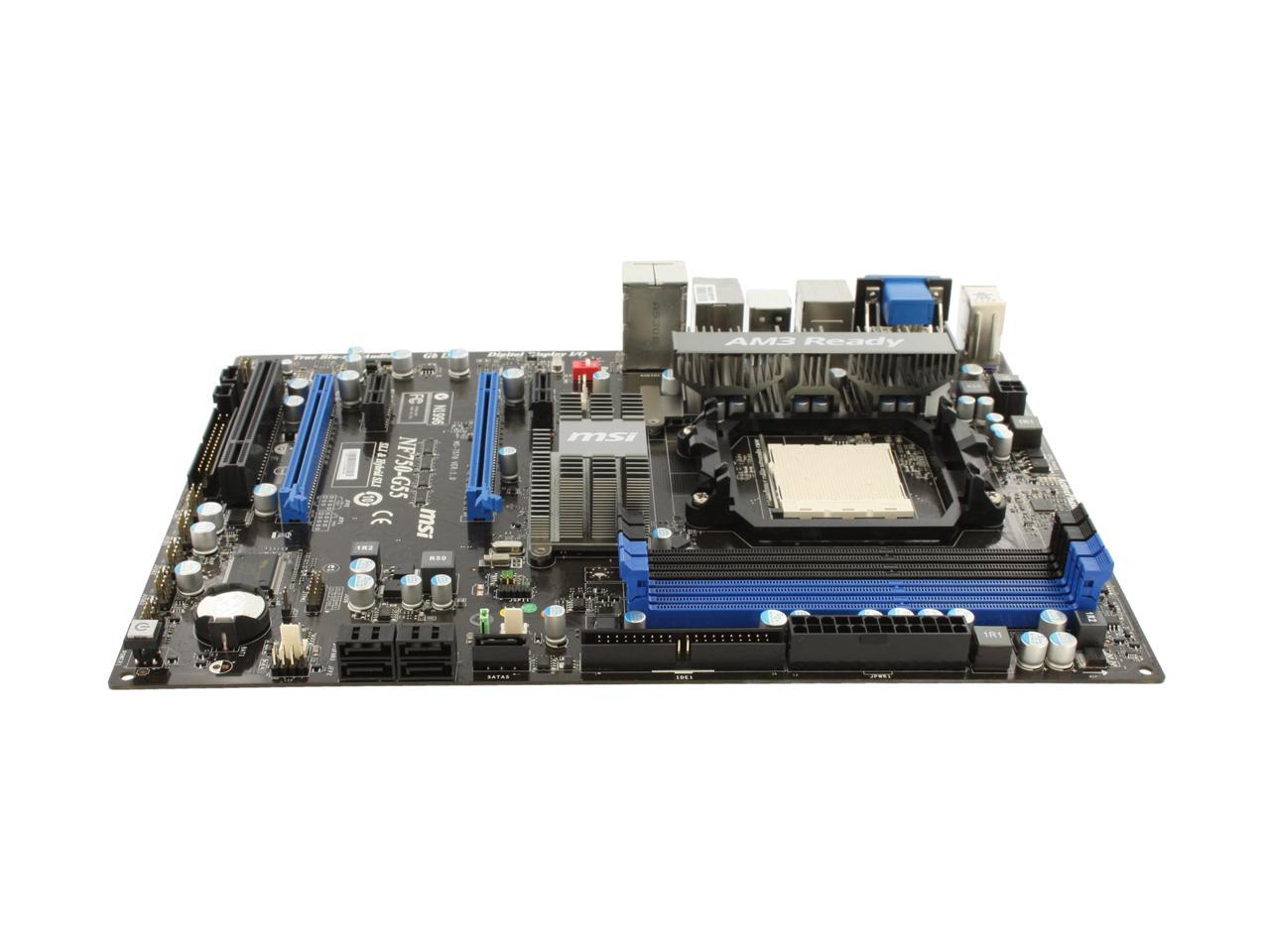 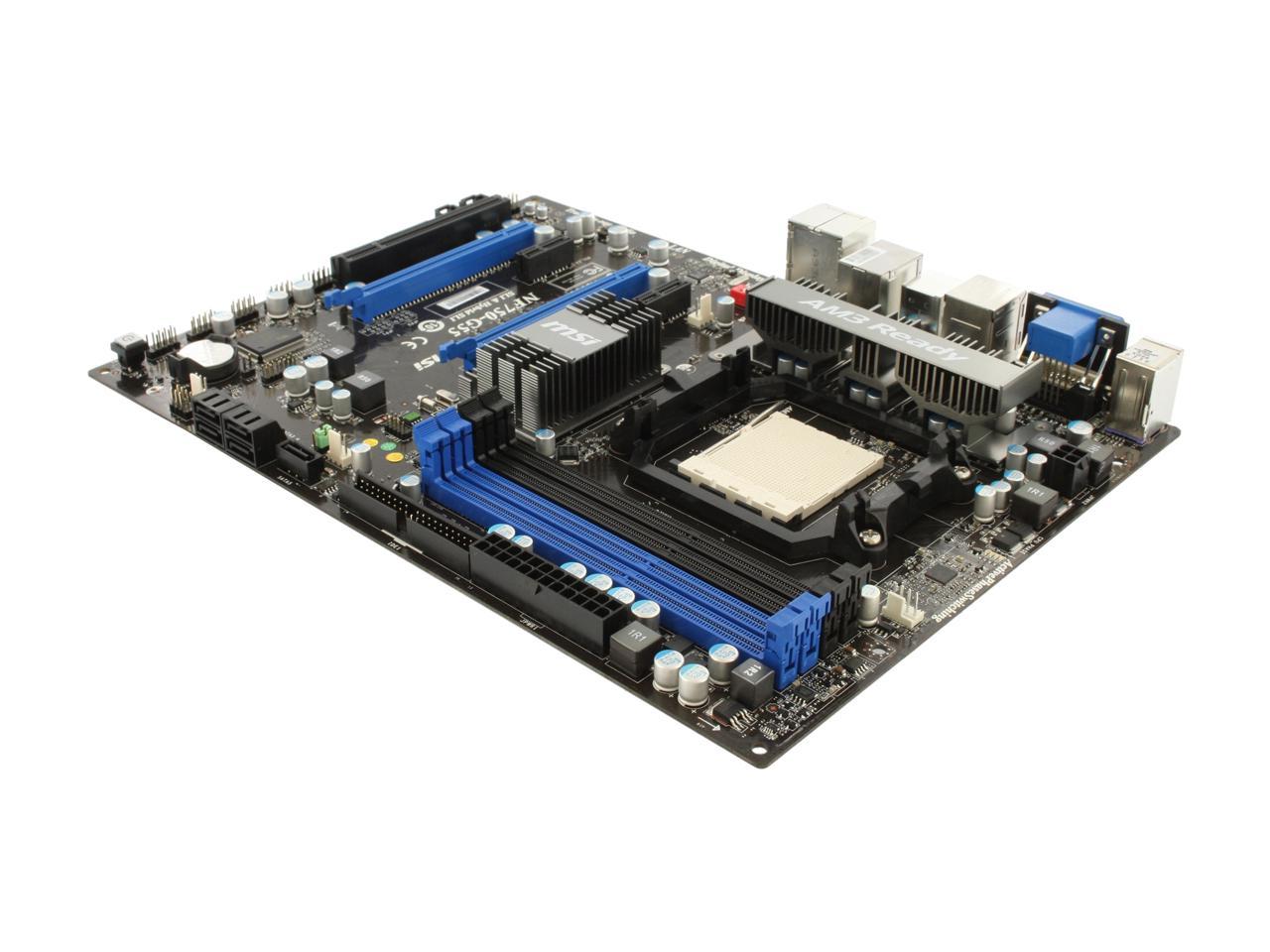 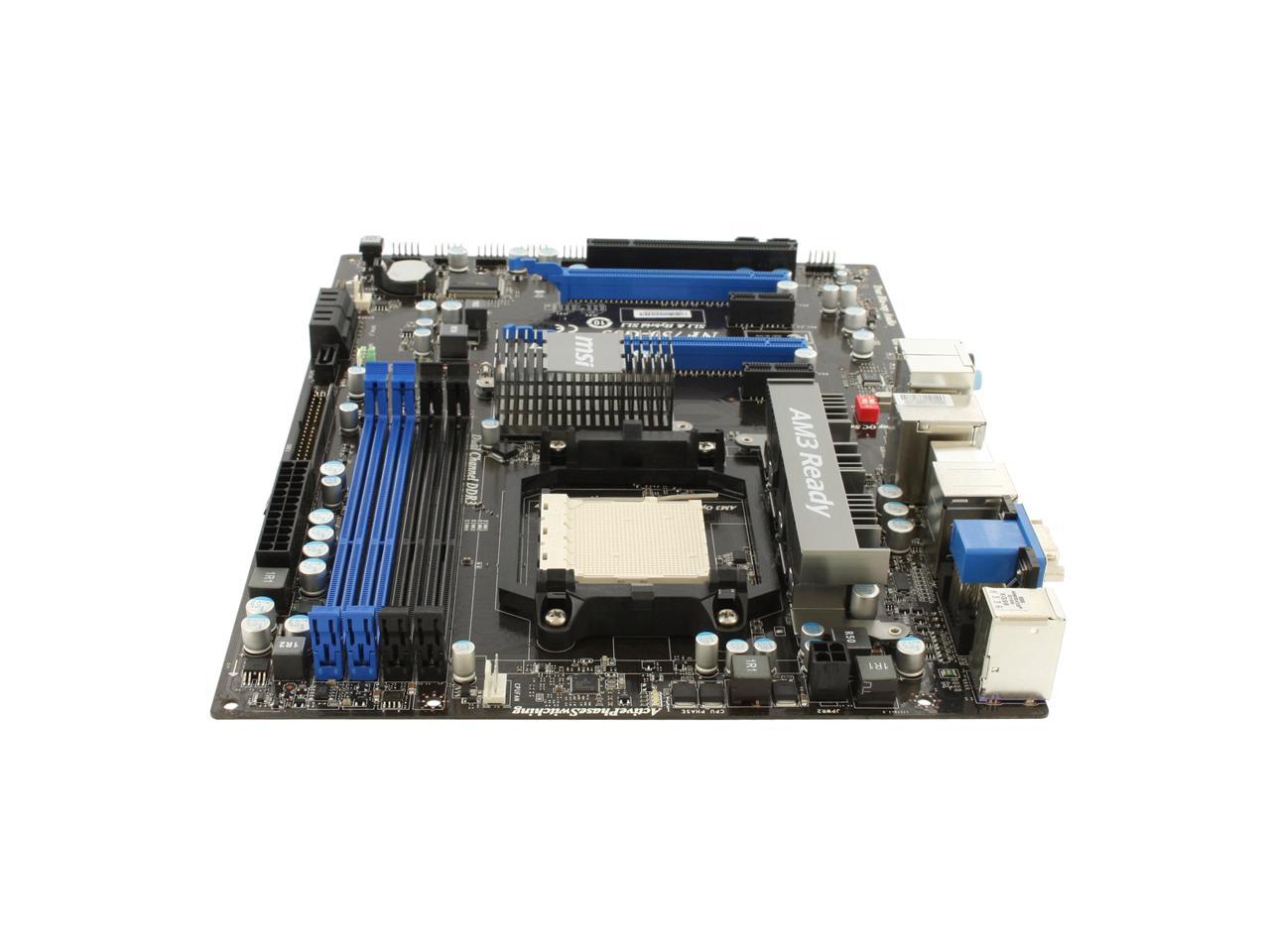 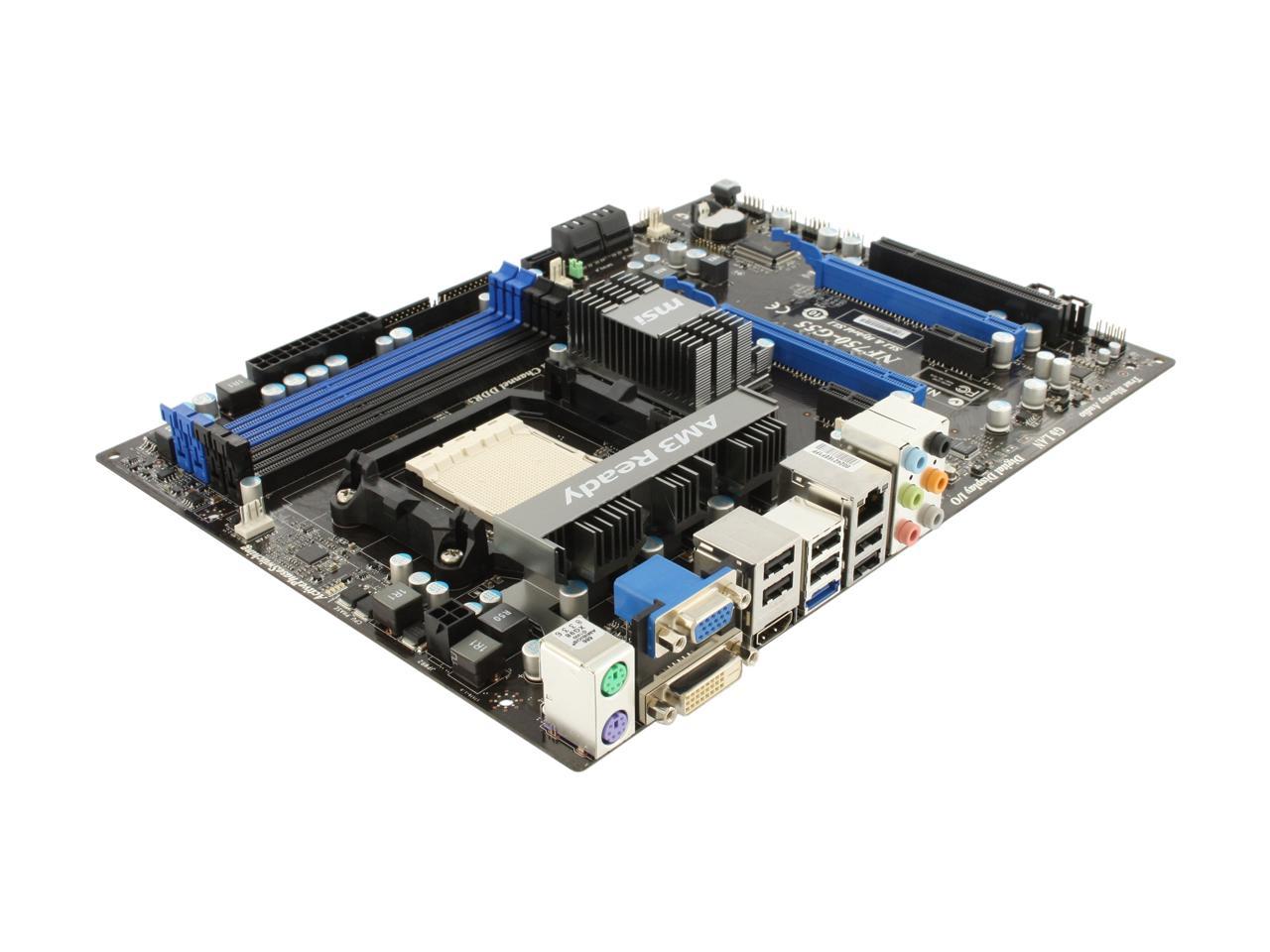 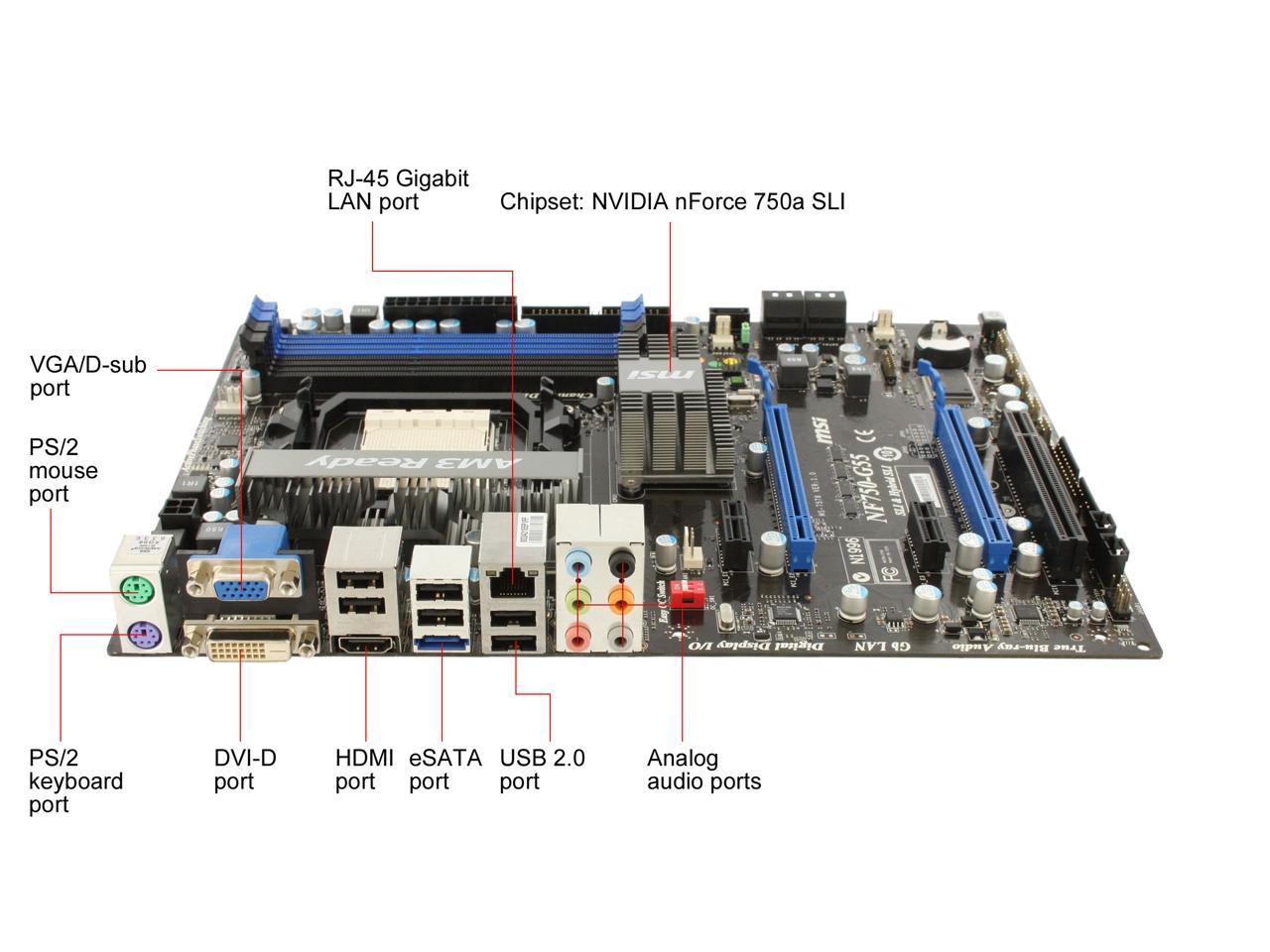 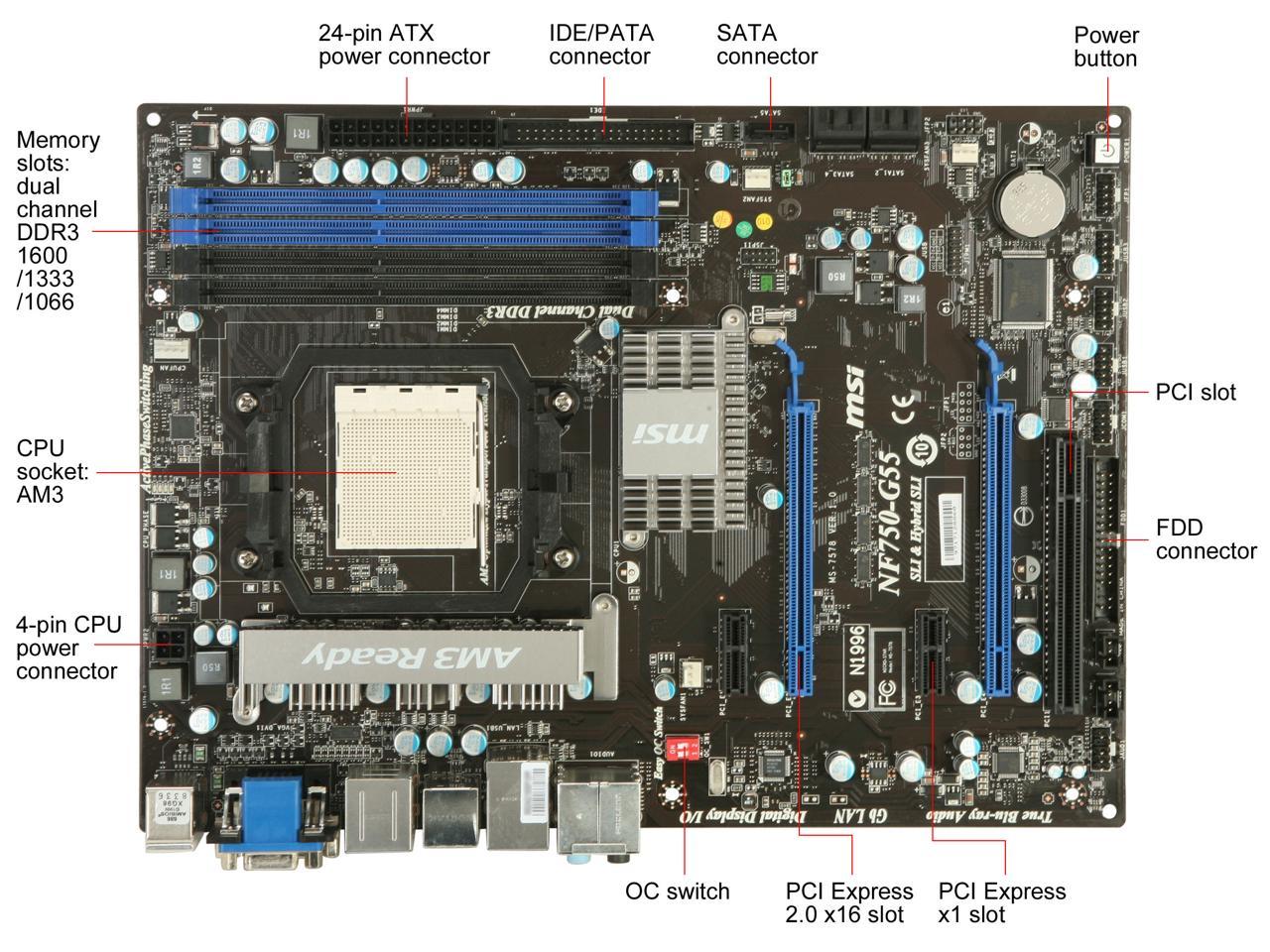 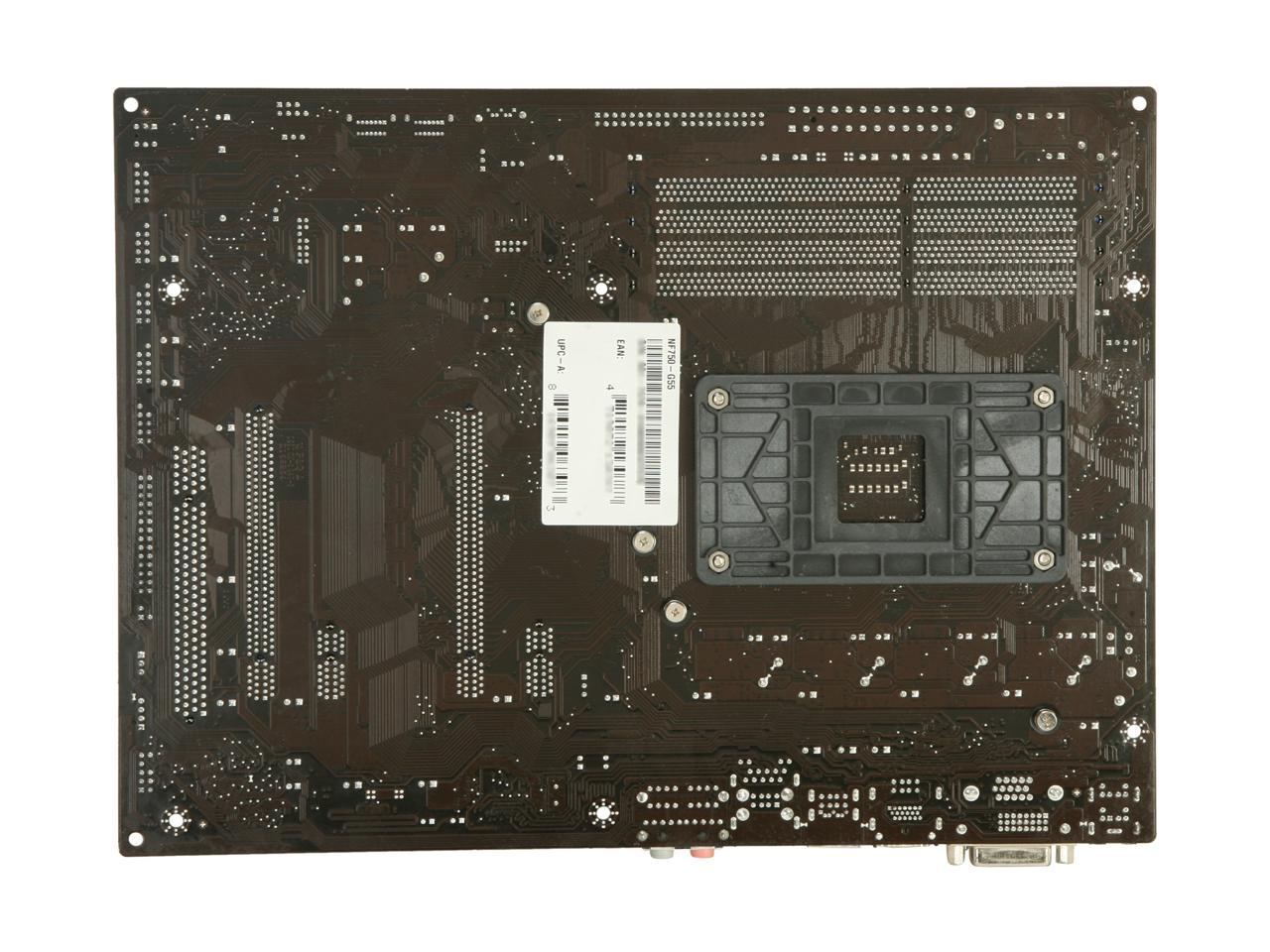 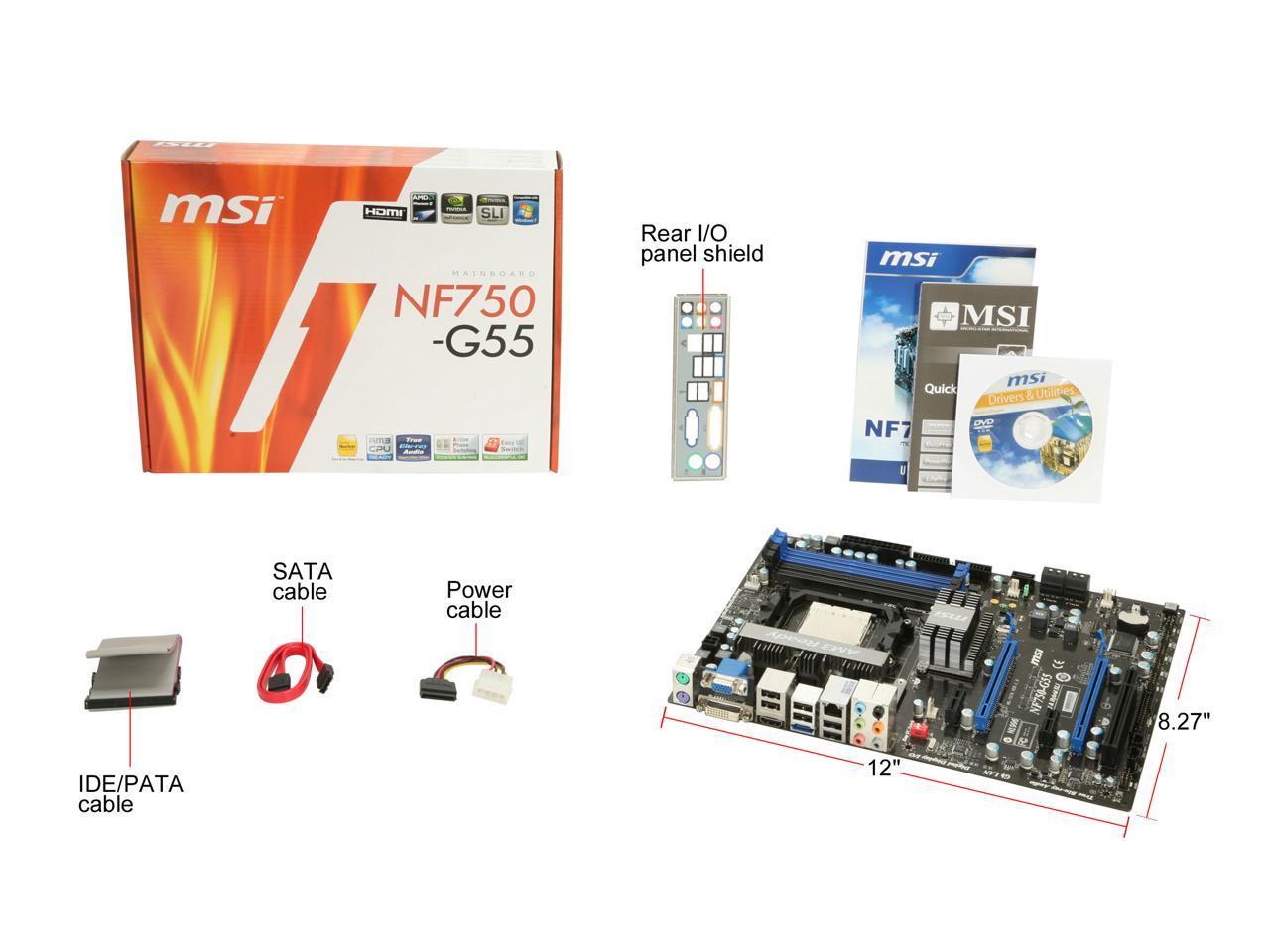 (279) Write a Review
OUT OF STOCK.
Overview
Specs
Reviews
Get fabulous graphics and computing performance with MSI's NF75-G55 motherboard. Based on NVIDIA nForce 750a SLI chipset, this ATX form-factor board is designed to support the latest AM3 Phenom II, Athlon II and Sempron 100 Series processors.
Dominate your applications and games with up to 16GB of DDR3 memory fitting into four 240-pin slots with dual channel support and 2600 MHz Hyper Transport technology for increased performance. Onboard Gigabit Ethernet LAN means that you can connect to other networked devices without running into a bottleneck.
The integrated NVIDIA GeForce 8200 chipset can be augmented with two PCI Express 2.0 x16 graphics cards to achieve SLI-linked performance at a fraction of the price. Video can be output through the DVI, D-Sub or HDMI ports and accompanied by eight channels of sound from the Realtek ALC889 audio chipset. Five 3Gb/s SATA connectors give you the ability to store massive amounts of data locally with several RAID configurations possible for extra security and high-speed performance. Six USB 2.0 ports give you additional options in connecting and expanding your system.

Pros: AM3 SLI DDR3 Unlocks Phenom II X2 550 BE Throw a switch and auto OC's your CPU Mine came with the SLI bridge Must say I am very happy with this board What else do you need?

Cons: None? Does its job well.

Pros: Well I have been using this mobo for almost two days now. The install was absolutely painless. Everything is working flawlessly. The DDR3 ram is working perfectly and the reported speeds/size for all components are correct.

Cons: None yet. I'll report back if I find anything. I haven't pushed it much yet. The nVidia stress test was nothing for the system, didn't even seem to push it much. Only gaming thus far is Qlive, so that isn't exactly a test. I don't want to install much because I intend to move to Win7 as soon as it's available.

Overall Review: Mobo is installed in Antec 900 case with a Phenom II 955BE, 4G of GSKILL DDR3 1600 Ram ( http://www.newegg.com/Product/Product.aspx?Item=N82E16820231193 ), and one 9800GT vid card. Going to add another 9800GT to run in SLI mode ASAP. Also going to add 4 more GB of the GSKILL ram. I'm not one to buy the latest versions of anything, so this mobo was a stretch for me. But like I said above, this install was totally painless. Oh also, this is the power supply http://www.newegg.com/Product/Product.aspx?Item=N82E16817182186 Eventually I will get around to some tweaking and OC. I want to try the easy overclock switches for sure. But with stock install it runs perfectly. Everything was bought last week right here on Newegg. Shipping was fast. All around just an excellent experience. Bolt everything in, boot up and install OS, enjoy computer.

Pros: This is an awesome board overall. Not cramped, plenty of room to sli. If u plan on using an AM3 cpu socket and a nVidia gpu; Get this mobo.

Cons: My only complaint is minuscule; I had trouble with the bios. my comp would turn on and the screen would be like snow. it wouldn't load the bios menu. I played with a few times and got it working a few mins later. Not bad enough to deduct an egg.

Overall Review: Get it if u want to sli and use an AM3 cpu socket.

Pros: Not a bad price, has a ton of nice features including OC and core unlocking. Good size and space management.

Cons: It did not like my AMD Phenom x6. At first I was getting BSOD when trying to installed Windows, so I flashed the BIOS to 1.3. I was able to install Windows fine after that, so should be out of the woods right? No, I kept getting random BSODs all over the place. I wasn't really sure if it was the board for sure or not since it was a whole new build. I ended up swapping out the board with a Gigabyte GA-MA785GMT-UD2H and I have not had one problem. Everything worked right out of the box. I've never used any MSI products before and I don't want to say I won't be using them in the future, but this was definitely not a good first experience.

Overall Review: It could have been a defective board, but I very confident that it was just not playing nice with my other hardware. Combined with the BSODs I was getting, it would also freeze on me as well. The main reason I didn't go below 3 eggs is because I truly don't think it's a bad board. I just think it wasn't a good choice for the other components I chose for my build. I've always been a fan of Gigabyte boards and they've never done me wrong, so I will probably stick with them, but I wouldn't say MSI lost a customer just from this one experience or anything.

Pros: The board has easy overclocking, to get real OC you need to get your hands dirty. BIOS settings should be used instead of the easy switch. This board is very easy to setup. Very stable with OC'ing. Brought my AMD X4 955 BE from 3.2 Ghz to 3.9Ghz with out high heat gains beyond exceptible levels, using aftermarket thermal paste and cooler. Pretty much your best choice if your running an AMD CPU and want SLI.

Cons: Buried deep within MSI's website is a list of approved RAM http://www.msi.com/uploads/test_report/TR10_1874.pdf It should have been easier to find. I have to RMA my RAM, as the board kept crashing and would not reach RAM speeds over 1333. This board uses low voltage RAM.

Overall Review: Other than the fact that the RAM list is buried this is a great board. Mine came with the SLI bridge and ALL 5 SATA connectors work just fine. Easy RAID set up.

Pros: Feature rich at a good price: Nvidia chip-set with SLI, External-SATA at the back, full speed Gbit NIC, AM3/DDR3, legacy PATA for old HDD and CD/DVD ROM, OnBoard Video in needed, and all from a quality manufacture - MSI.

Cons: None so far; thought I was having trouble with the SATA controller, BUT it turned out to be a BAD SATA CABLE - not a cable from MSI, either.

Pros: Good simple layout, nice feature set for a 'budget' board, HDMI and eSATA from the backpanel, well built.

Cons: Not sure I get the onboard 'power button' or the screaming bright LED 'CPU phase' gizmo....and 'OC switches'? If you want to OC, read, learn and try. Dont flip switches. It's a little like 'become an enthusiast in 3 easy steps', and then all the reviews are jammed with melvins who cant figure out BIOS settings. 5th SATA is non fuctional on mine, as with others. Also, I should flame the guy below for saying engrish, you sound pretty stupid to the engineers at MSI too Im sure. Deduct 1 egg for the SATA plug, and shame on newegg for not pulling the racial remarks outright.

Overall Review: 5th personal MSI build for me, I really like the quality and for price-conscious folks like myself, they are very flexible and have the right features. SLI ppl might stick with the 78x or 9xx revs, this board is 8x8x in SLI, and hybrid is outdated (a $50 card would not benefit from a boost from an 8200). For the single-card option this is a steamroller and has years of headroom! Cant wait for a Fermi!!

Pros: It works and it comes with the sli bridge and an extra sata cable.

Overall Review: It is good for SLI/AMD setups, which is hard to find motherboards for. Also, NVIDIA has spec for this chipset on their website but they are wrong. NVIDIA says it is DDR2 and has other really old specs, but rest assured the specs quoted on newegg are correct.