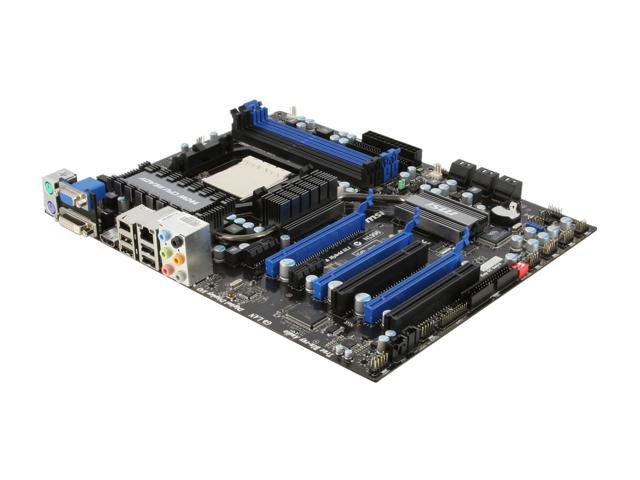 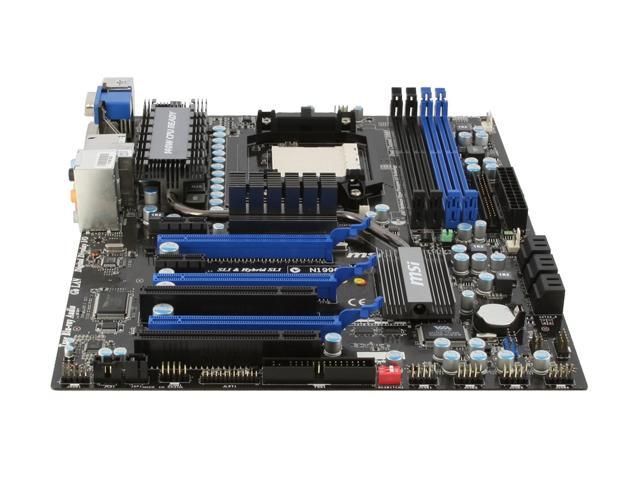 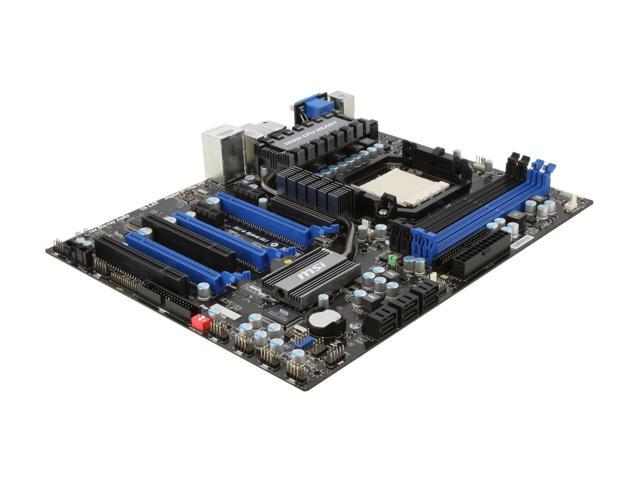 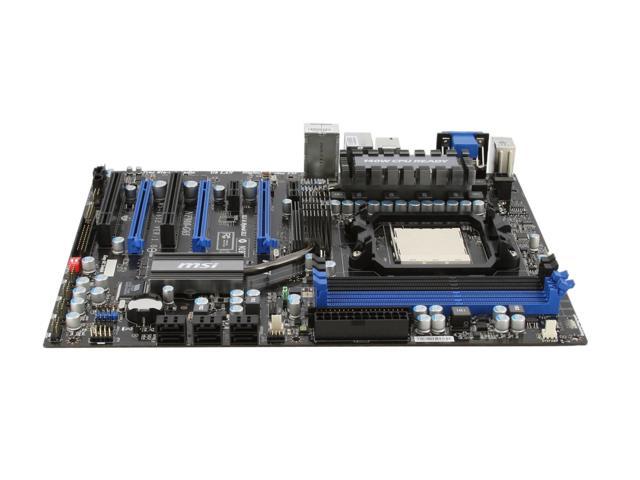 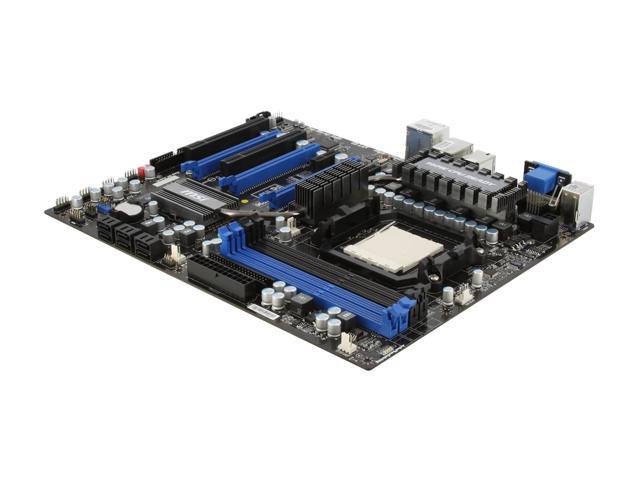 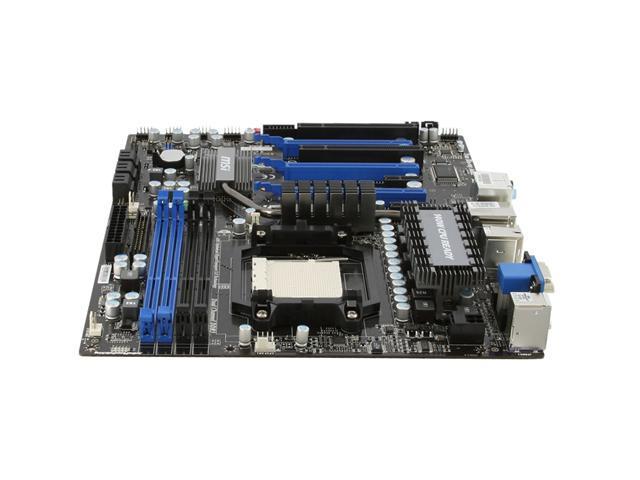 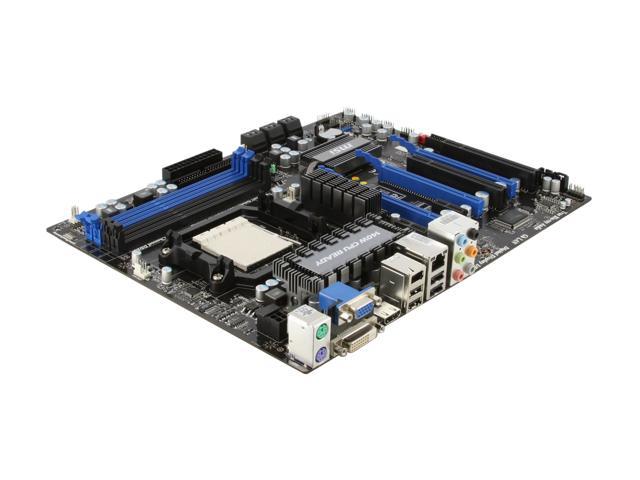 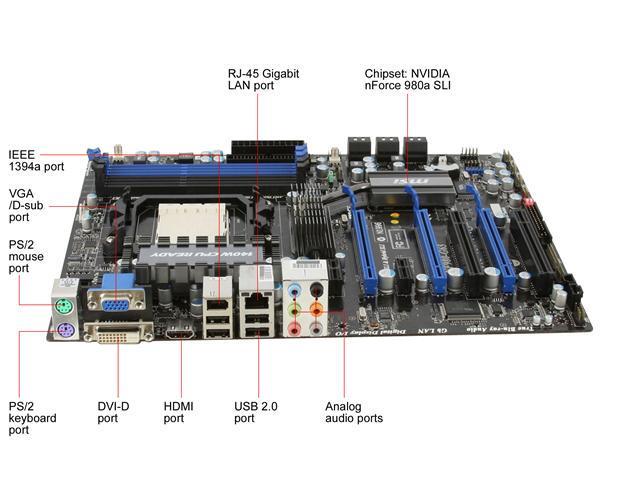 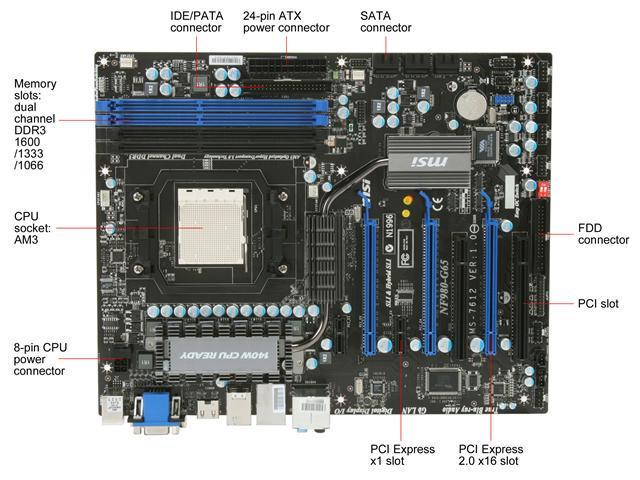 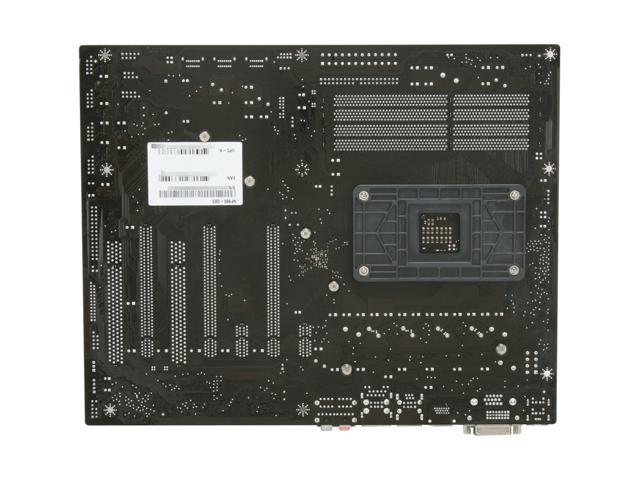 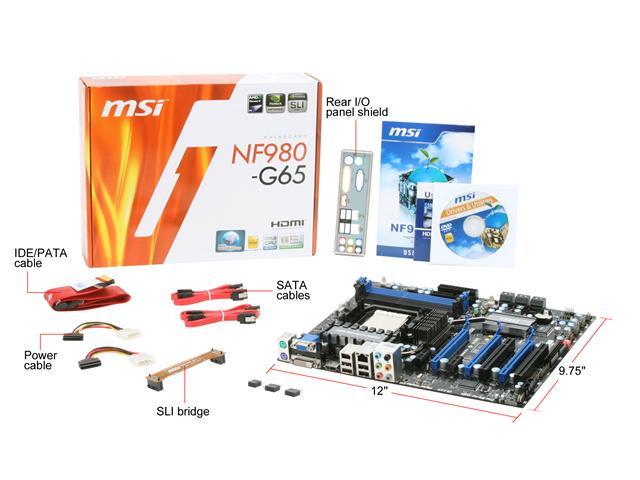 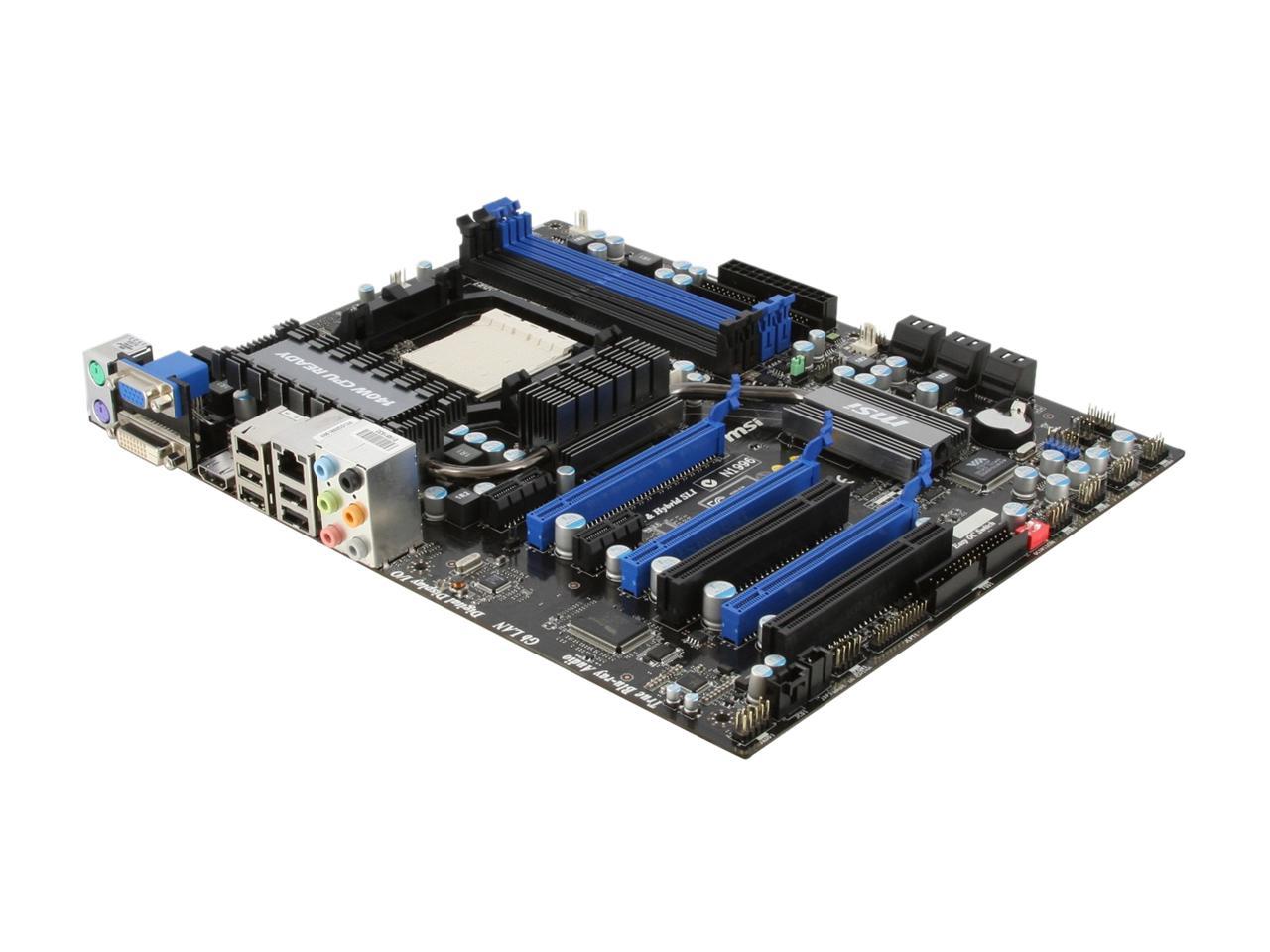 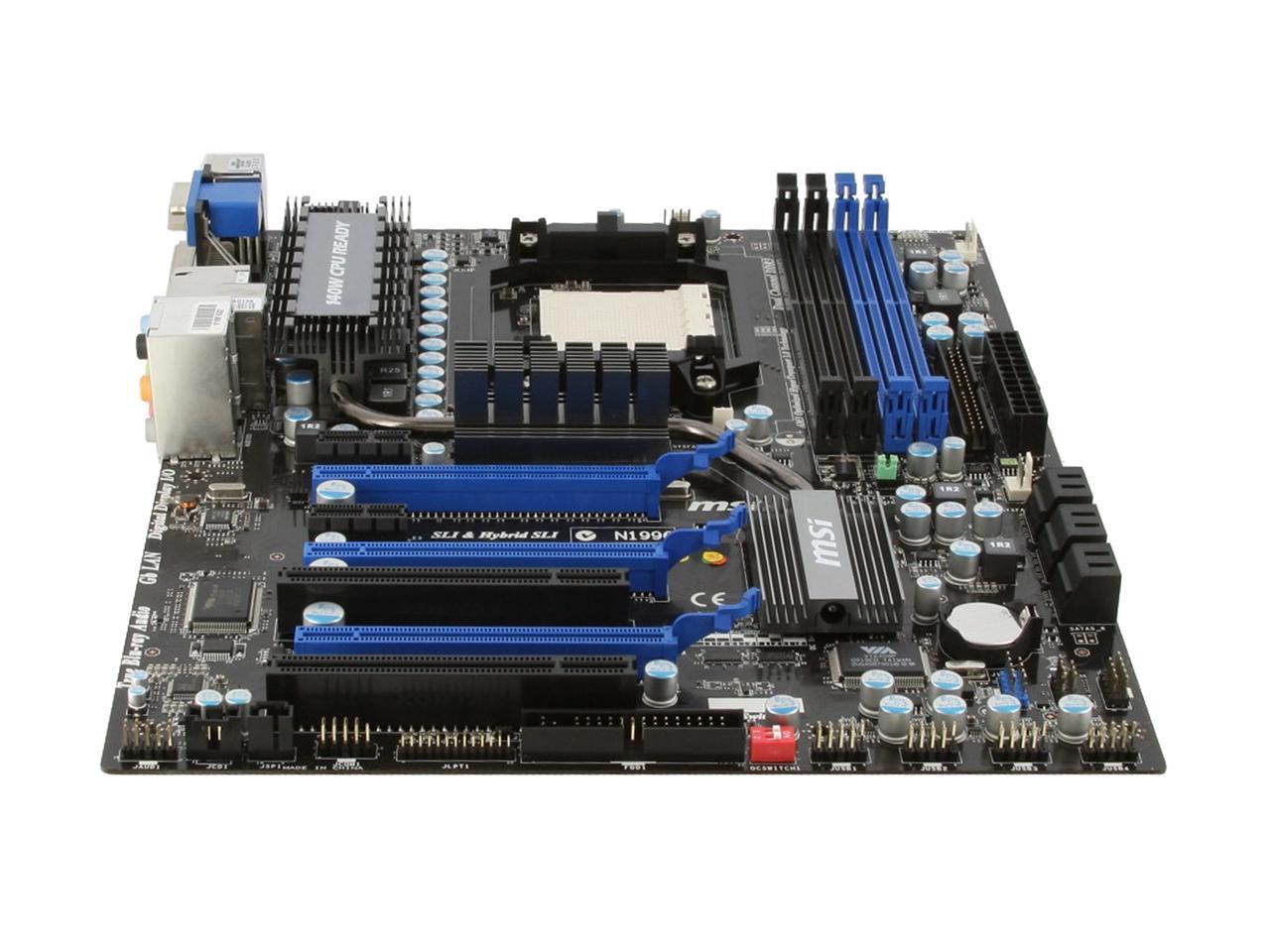 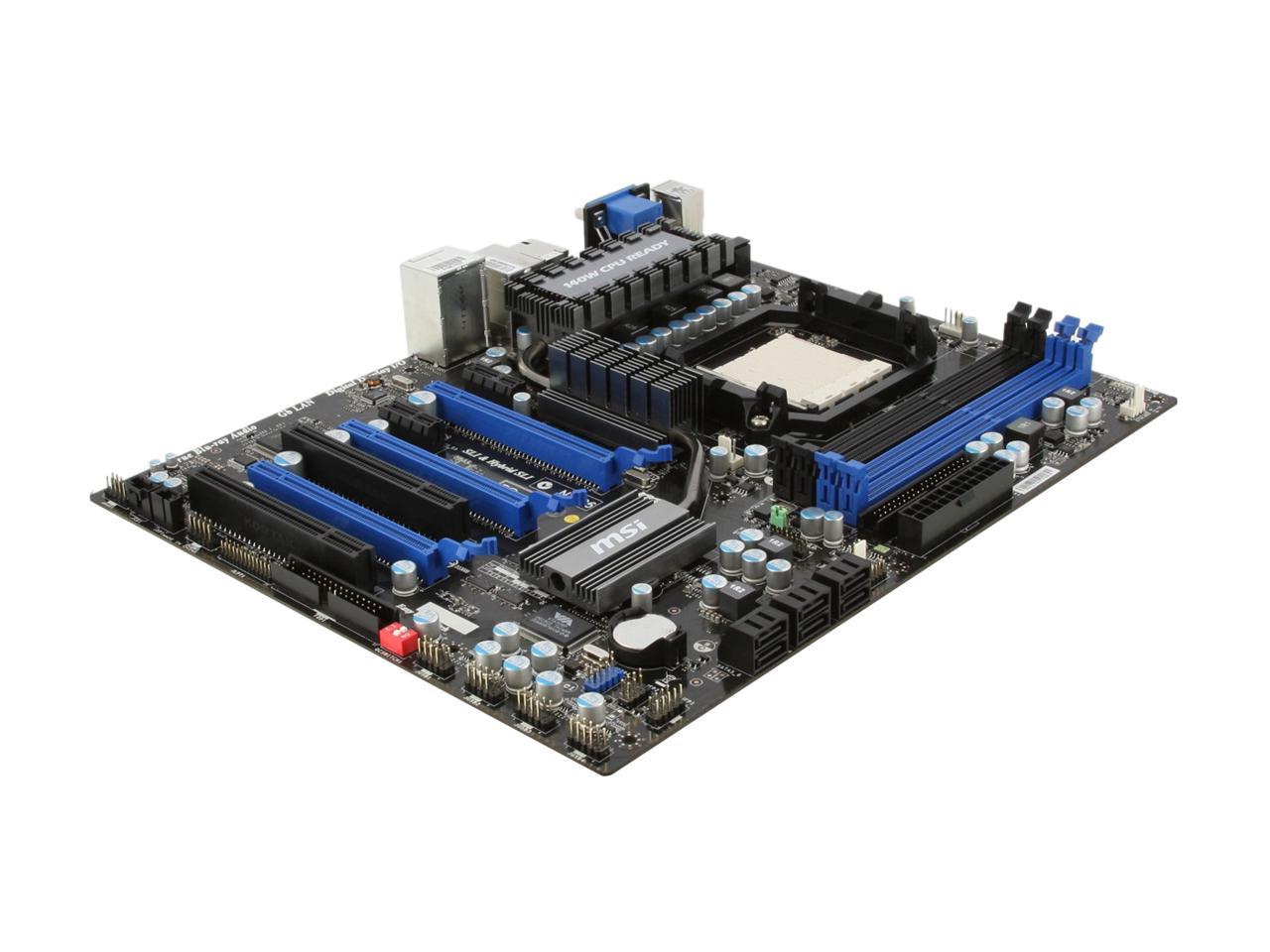 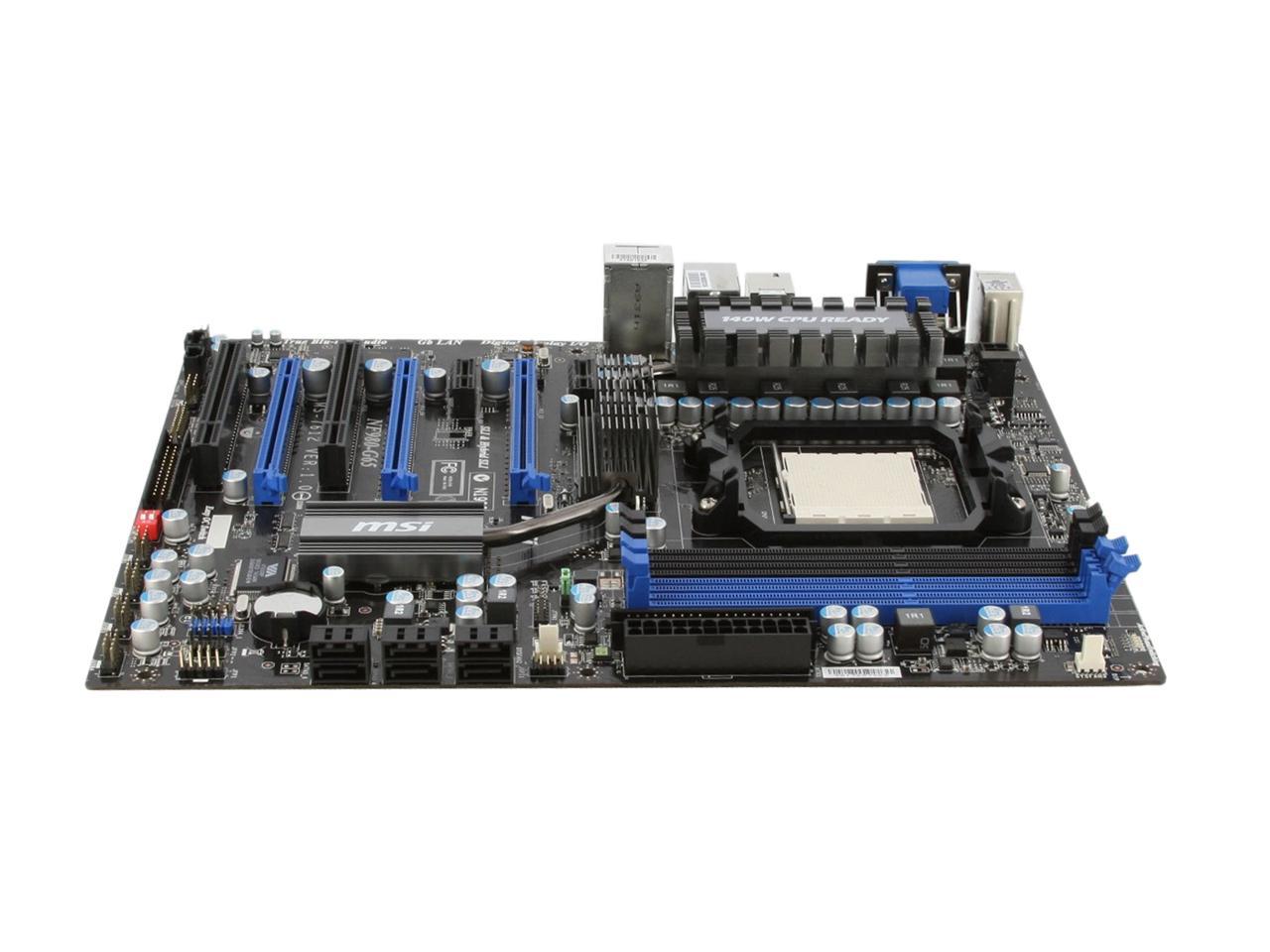 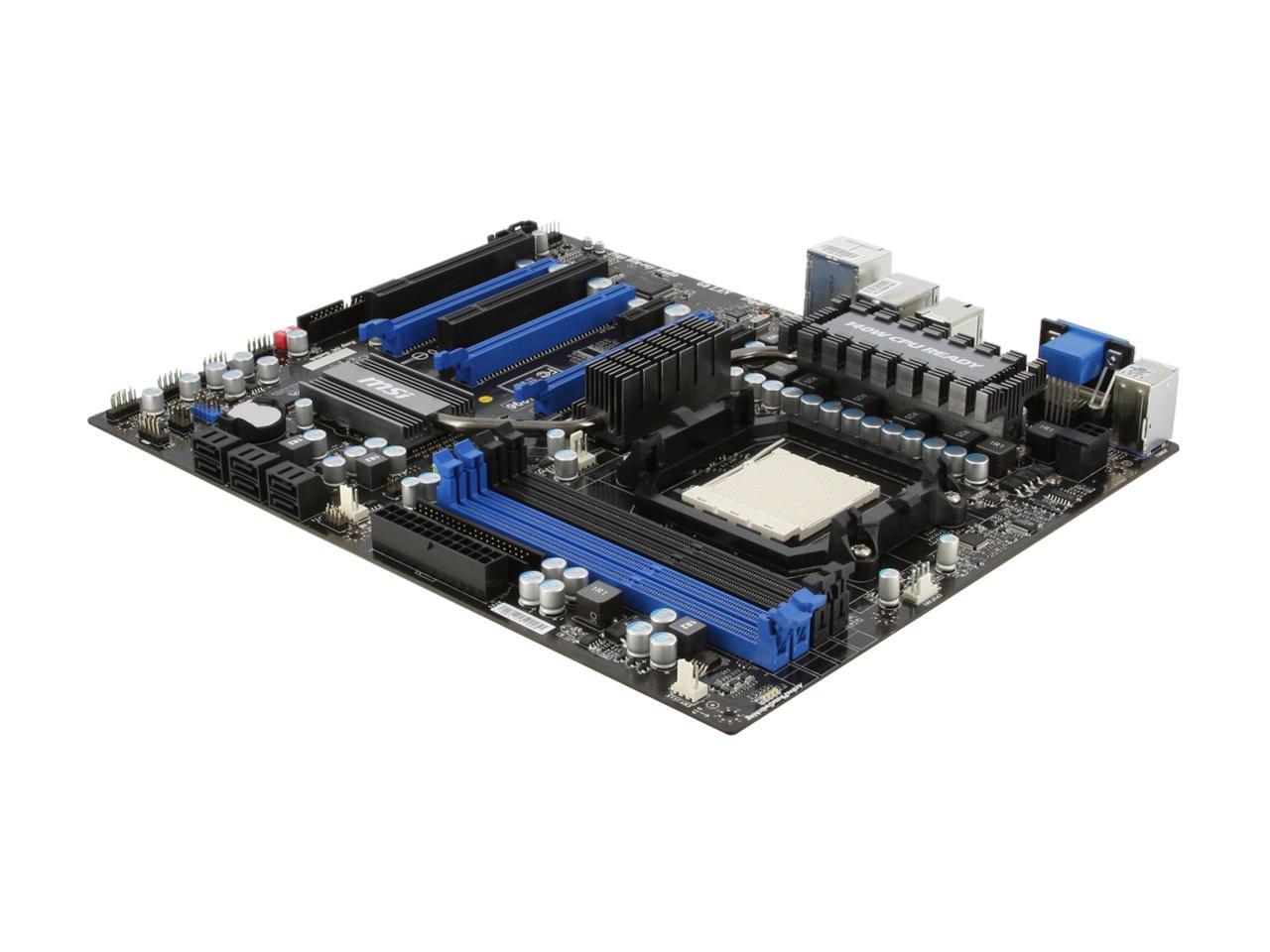 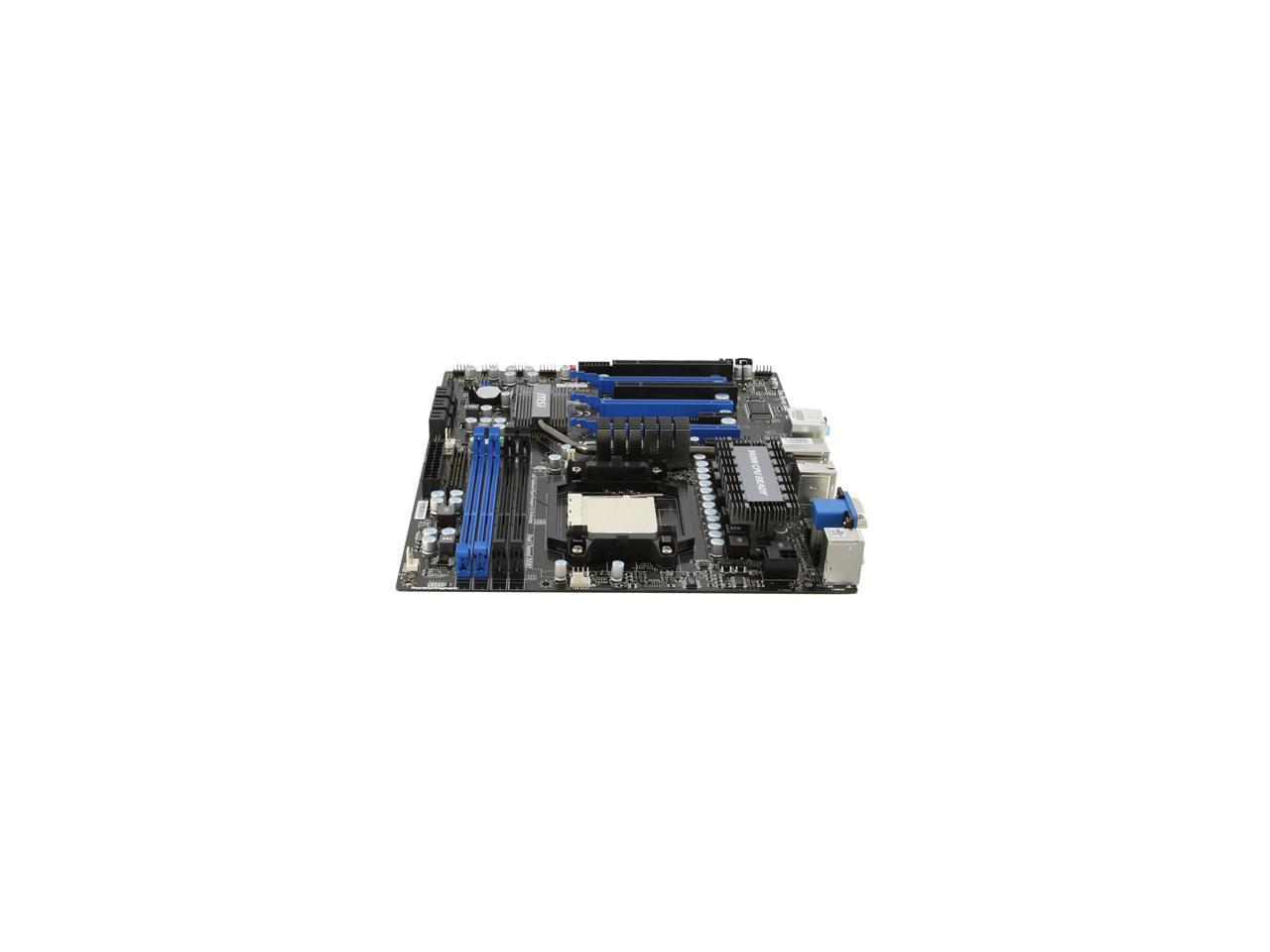 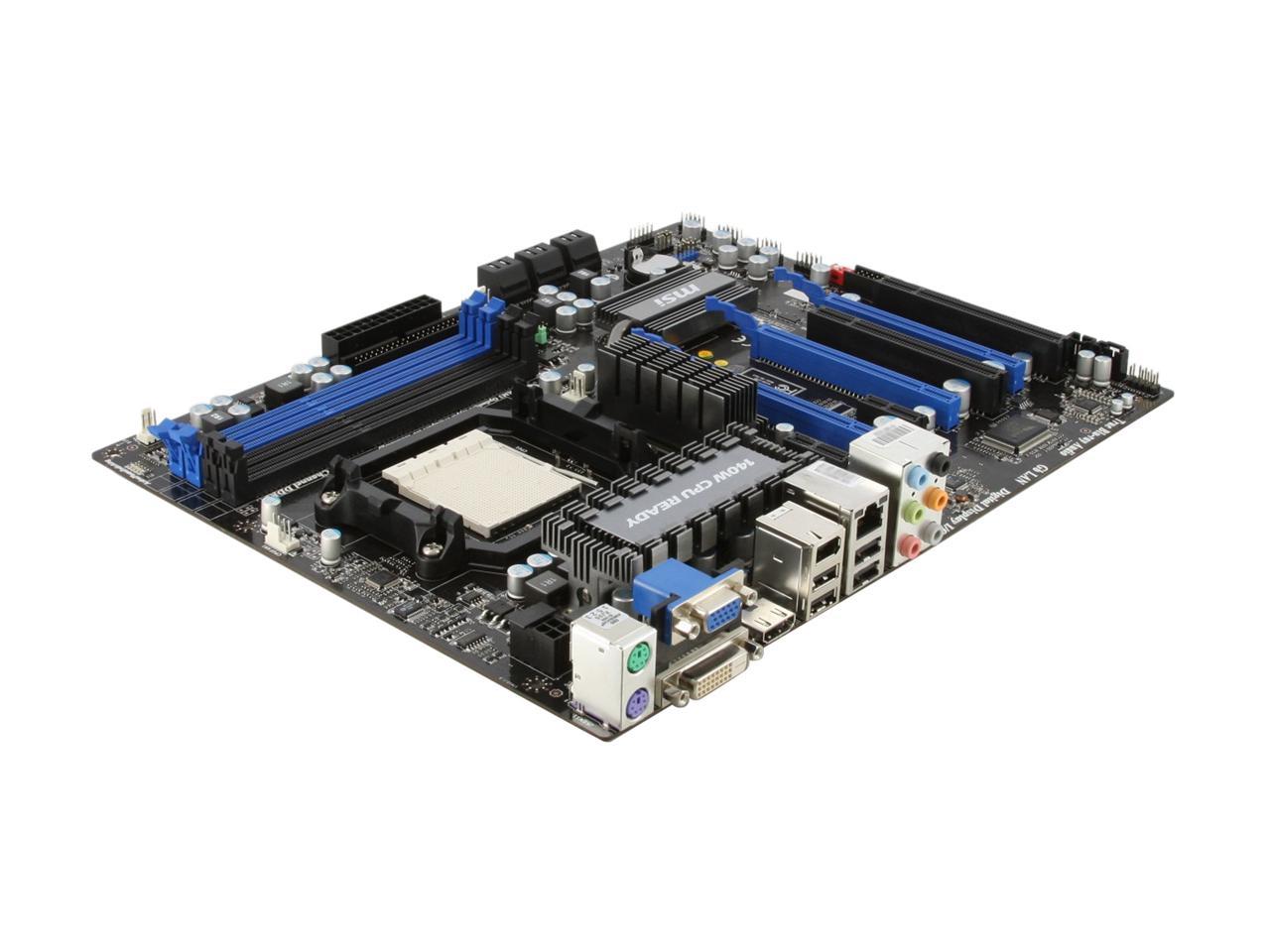 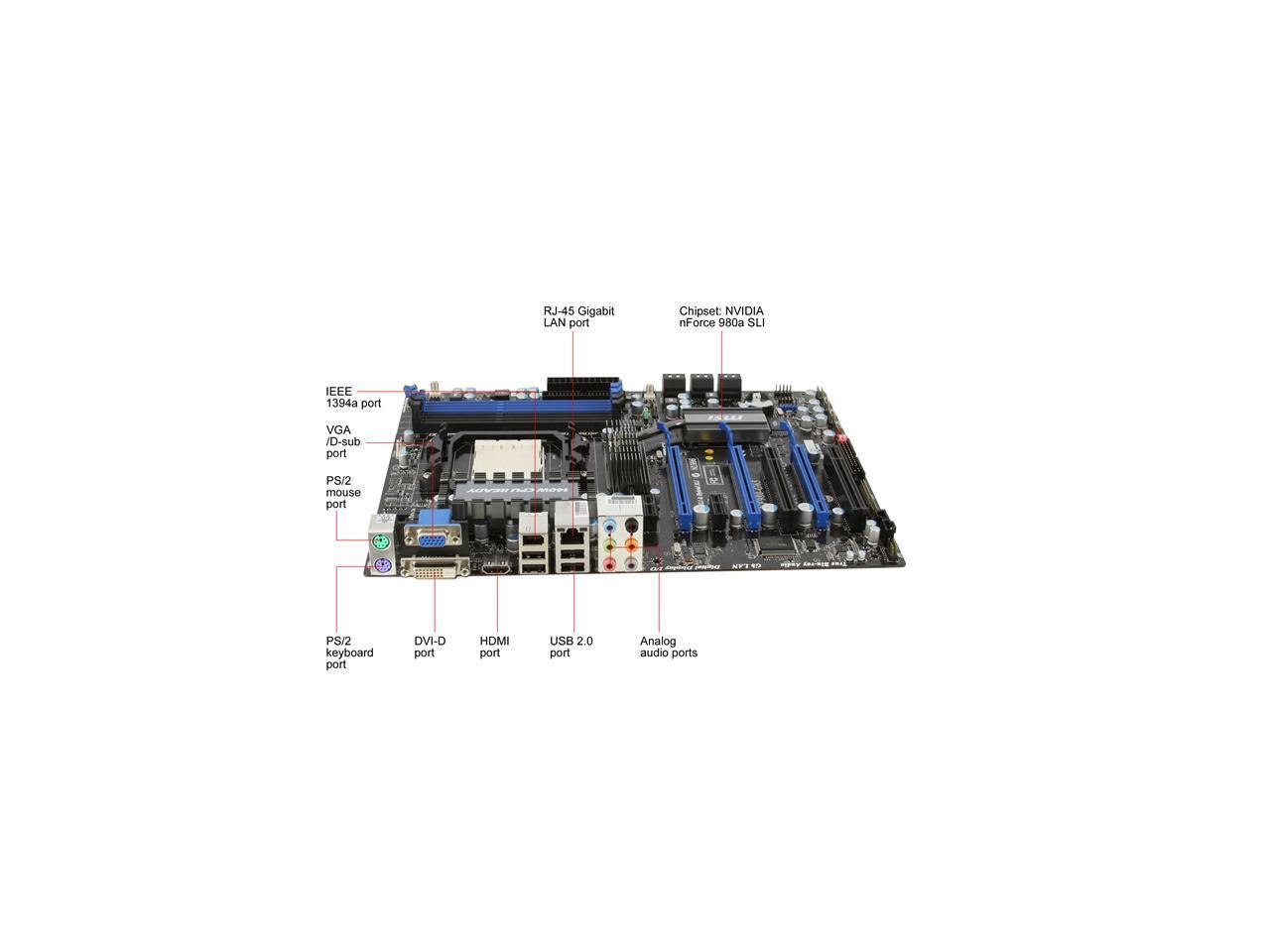 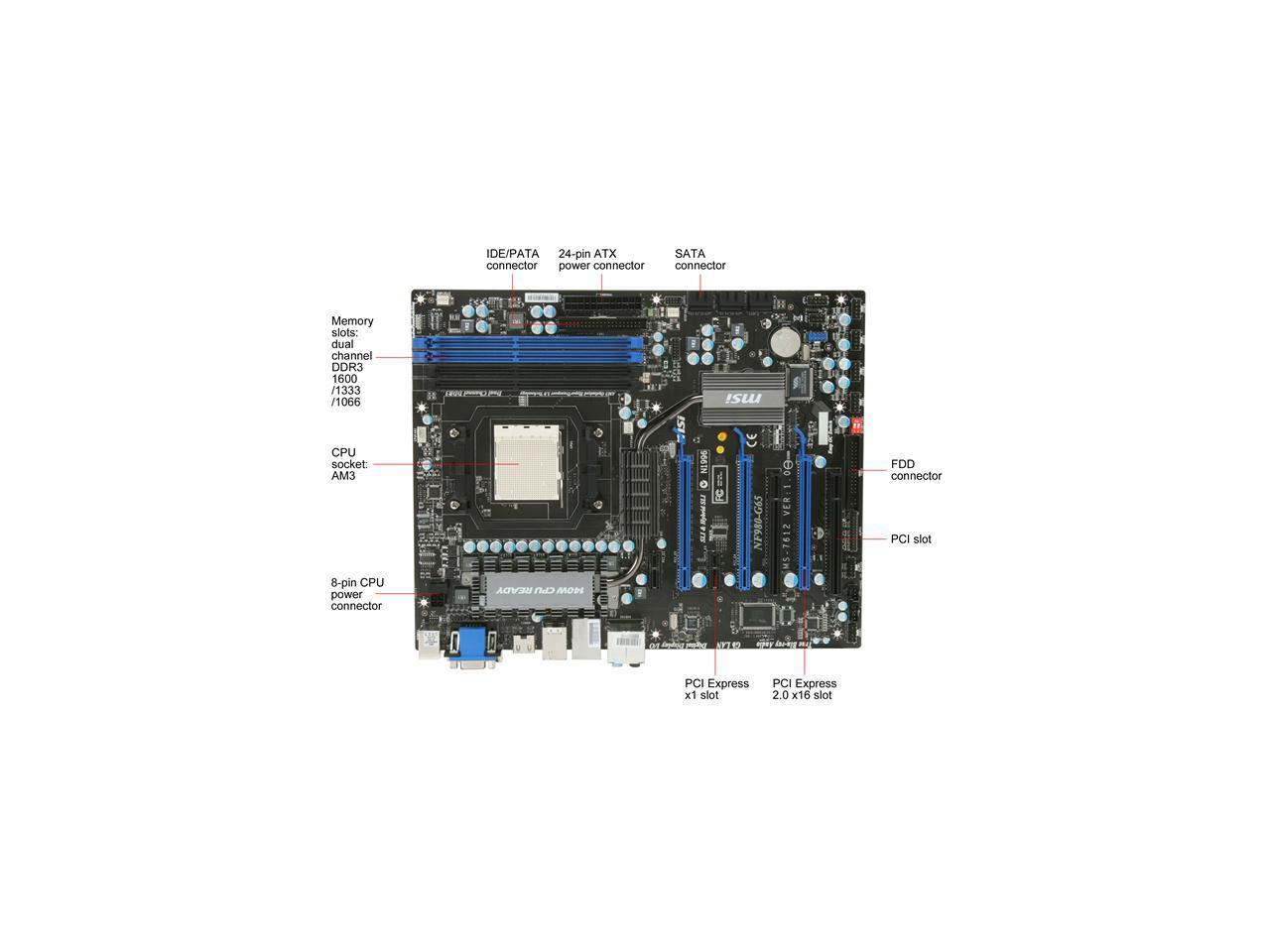 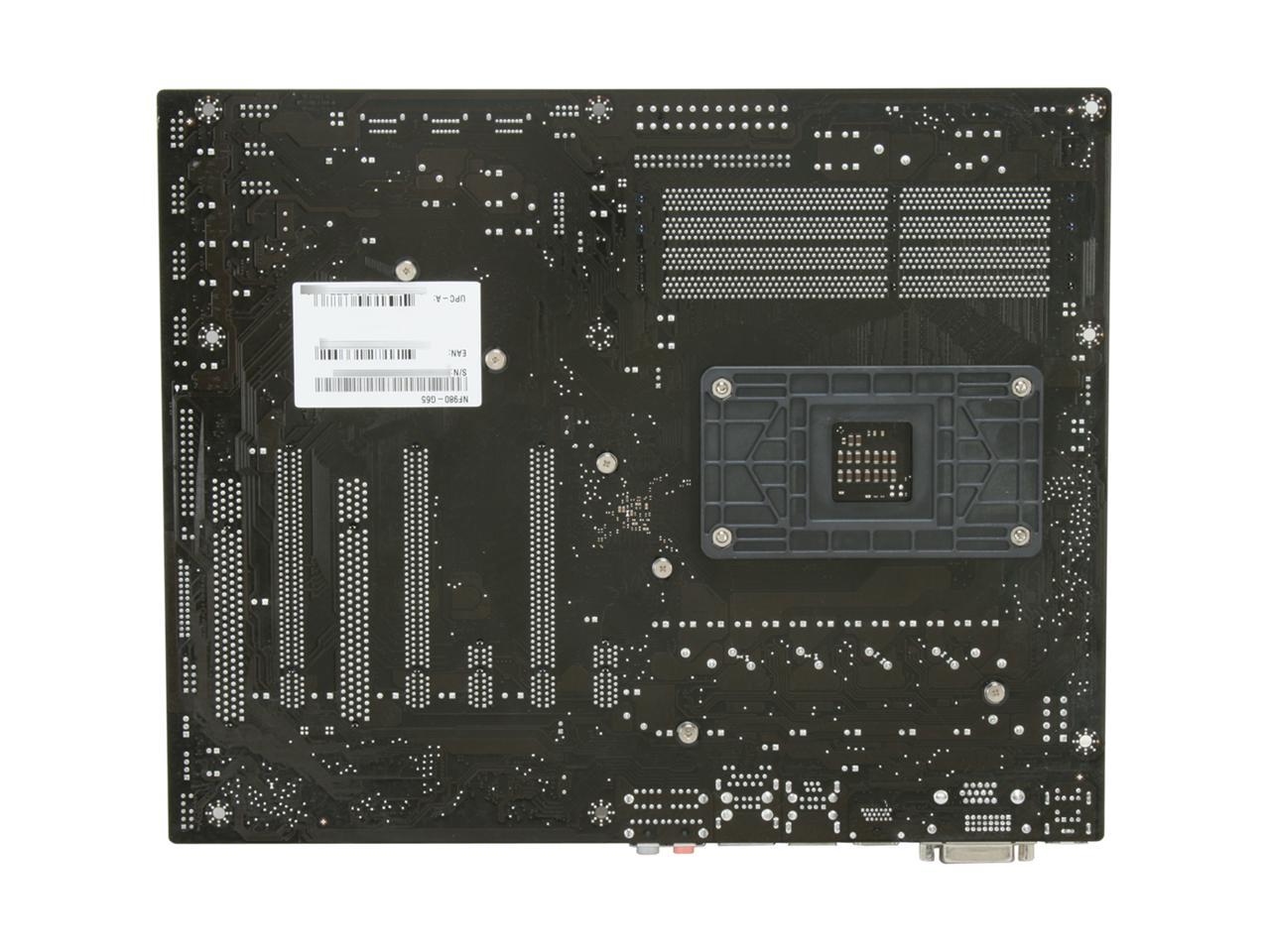 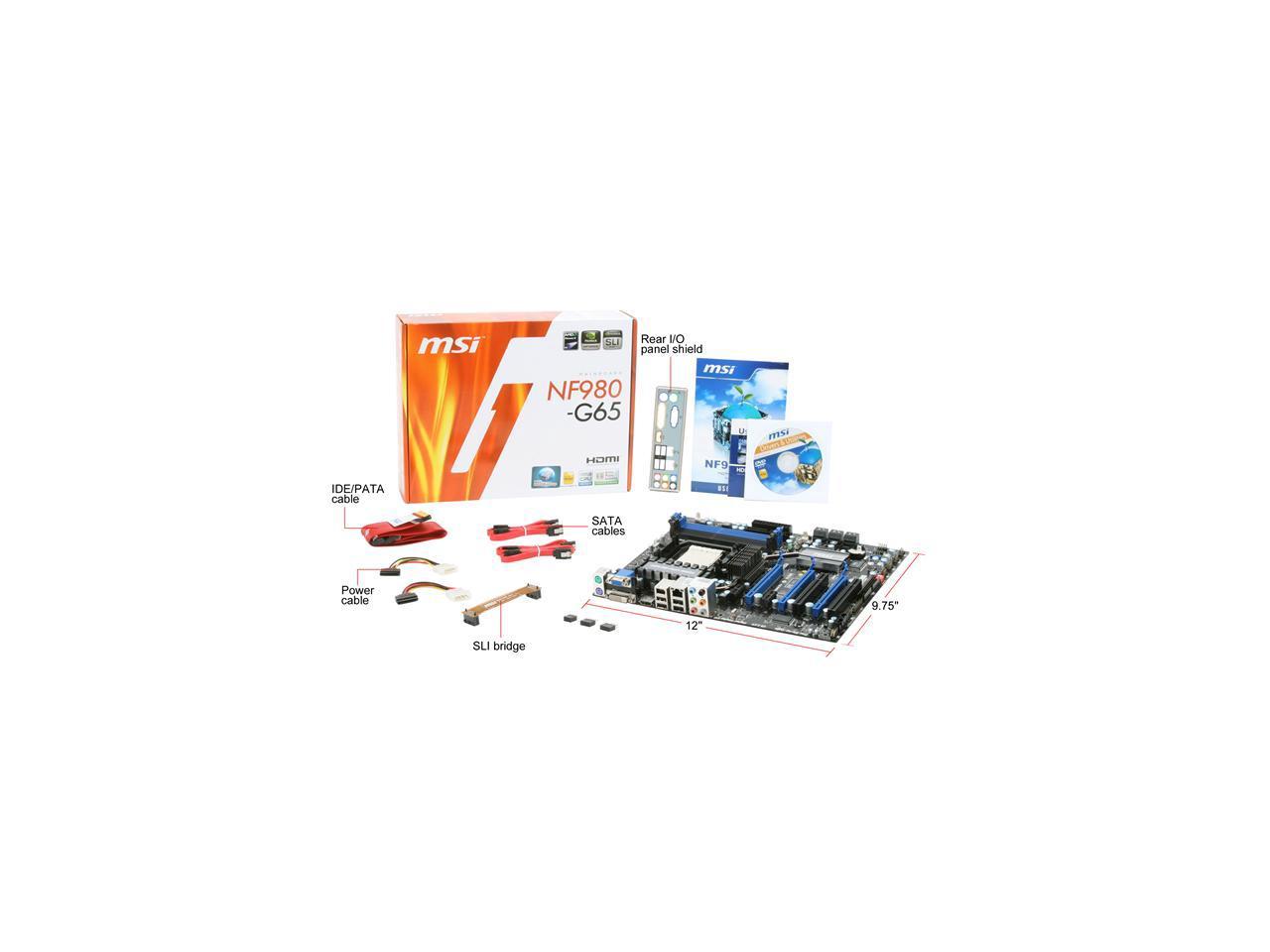 (351) Write a Review
OUT OF STOCK.
Overview
Specs
Reviews
Get excellent graphics and computing performance with MSI's NF980-G65 motherboard. Based on NVIDIA nForce 980a SLI chipset, this ATX form-factor board is designed to support the latest AM3 Phenom II, Athlon II and Sempron 100 Series processors.
Dominate your applications and games with up to 16GB of DDR3 memory fitting into four 240-pin slots with dual channel support and 2600 MHz Hyper Transport technology for increased performance. Onboard Gigabit Ethernet LAN means that you can connect to other networked devices without running into a bottleneck.
The integrated NVIDIA GeForce 8 series chipset can be augmented with three PCI Express 2.0 x16 graphics cards to achieve SLI-linked performance at a fraction of the price. Video can be output through the DVI, D-Sub or HDMI ports and accompanied by eight channels of sound from the Realtek ALC889 audio chipset. Six 3Gb/s SATA connectors give you the ability to store massive amounts of data locally with several RAID configurations possible for extra security and high-speed performance. Four USB 2.0 ports give you additional options in connecting and expanding your system.

Pros: First I have to say I love this board. The color, layout of everything and even the easy overclocking switch( more on that later) it seems to be great placement of everything in comparison to my last mobo. Has enough USB headers for all my add ons inside the case and yet I still have no issues with any of them not posting properly like on my old mobo.

Cons: While I admit this is a great board, but it comes without problems as does anything else that is new. From my experience I have experienced quite a few set backs but have been able to overcome them all. 1. no post....found that the bios has a no post button you have to press in order to overide the errors and allow it to post, F1 key is what you have to press. 2. Startup issues, when i powered on I have to hit the reset button everytime to get it to post properly...but thats more due to the fact I never did a clean install of my OS and just ported everything over to my new setup. not worth taking a egg off for my laziness 3. temperature diodes is all wrong, I have used various software to try and read the temerature of the board and none come even close to reading it properly....this is where a infrared heat gun works it s best

Overall Review: While I have listed a few cons, I really do not think that its deserving of taking any eggs off for this as its a new motherboard with only a factory bios, as more issues come to light MSI will issue a bios update that should fix these issues. On a side note: for anyone who does not have this board you should not be making comments about it as you give false hope and misinformation to those who may be interested in buying it.

Pros: First of all, I'd like to point at that I actually own this board. I know, right? Who reviews something on here they own? Ranting aside, this motherboard is truly awesome. First of all, a minor detail, but the BIOS is very easy to navigate. My board did not give any false readings on temperatures, and my PhenomII 955 is running more stable than ever. I have tortured my system since the arrival of this motherboard, and all I can say is "Wow". I have two GTX 260's in SLI and had 0 hiccups and installation was a breeze. The NB runs cool, and the lights on the board are a nice touch. There are also plenty of USB plugins on the motherboard itself. I won't rate the onboard VGA because I'm not using it. Remember to turn this off in the BIOS if you are only using your dedicated card.

Cons: I wouldn't trust a review that didn't give any cons. As said before, this motherboard is amazing. However, the placement of the power connectors wasn't very well thought out. Also, in difference to other AM3 boards, you need to "flip" your power cord as the connecter is backwards. You will understand what I mean if you purchase this board. Also, there aren't many USB ports on the back. This isn't a big problem, but If you have a hefty backup system and a lot of accessories (and don't have a case with a lot of USB ports) look elsewhere. Also, I don't know many people who run 3 cards in SLI, but the board only comes with a 2-way SLI connector. This could be a con, but not incredibly likely.

Overall Review: I can't stress enough how great this motherboard really is. I will update this review if something strange happens, but so far I'm as happy as can be. Also, you all know how your BIOS always has a "quick start" option (or something of the sort)? Well, this one does what it advertises. Boot logo and BAM - starts the Win7 startup immediately. No POST screen. Period. Odds are this will drop in price at some point, but I still advise anyone and everyone to purchase this board. Thank you Newegg as well for the fast shipping!

Pros: I like this mb alot. Works fantastic for a Nvidia Sli ddr3 mb. Always been a Asus guy for years. But since they have no option for a ddr3 sli, I switched.

Cons: none as of yet

Overall Review: I have this mb going with the new Phenom 965 125 watt cpu. Mushkin ddr3 1600 #996601. Quad sli Gtx295. Works fantastic. If you buy this mb and the new 965 cpu, the bios needs to be updated, it can be done with the 965 in. However do not use the M-Flash in the bios to update bios. Use the MSIHQ Tool that can be found in the Msi forums. If you use M-Flash it will result in a RMA for sure and will make the mb useless.

Pros: A very amazing board. I've had no problems with it so far and with my current build I haven't had to oc at all. Only AMD-SLI board option at the time of purchase. Didn't want to go with Intel because their cpus are over priced. Saved quite a bit of money. 300-500 to be exact. It runs anything and everything I throw at it max settings. The new NFS, COD 4, COD 5, Dragon Rising, etc all at 1920x1080. No stutters what so ever. There are many options in the bios too. Haven't really had to mess with them though. Because it runs rock solid and stable. Get this board, you won't regret it.

Cons: Wish it was free.

Pros: Well designed board, very dependable, as well as durable. This board with the latest Phenom II x 4 processor and watch it breeze through applications like a tornado through a office building.

Cons: The memory supported by this board and processor has to be 1.5 volts, all other memory above that has been unstable, so I would highly recommend staying away from high voltage ram. The North bridge like most boards gets a little warm, and if you have a GTX 200 / GTS 200 Series NVIDIA Video Card you wont be able to modify the North Bridge with a Heatsink / Fan which is a great idea for keeping it cool.

Overall Review: I came from a MSI Board into another SLI board after Asus let me down yet again. This one seemed to suit all my needs as well as allowing me to upgrade later if nessisary.

Pros: It worked pretty well out of the box, even better with a BIOS update. It was exactly what I wanted with two x16 PCI Express slots & a third for an eventual physx card. The manual says you either get x16/x16/x0 with two video cards or x16/x8/x8 with three, so I'm not sure what an earlier reviewer is talking about with x16 times 3. I have a Phenom II X4 955 overclocked to 3.5GHz using a AC Freezer 64 Pro cooler with AS 5 and the temps are reasonable in a moderately-well ventilated case. The PWM settings in the BIOS are good and allow me to keep it quiet enough for casual use, but fast enough for max usage. It handles two 8800GTS in SLI as hoped and my existing Windows 7 install from a 750A motherboard that died kept working with out a hitch, other than a restart. I am running F3-16000CL9D-4GBTD DDR3 at 1600 with only a voltage increase of 1.65v, as designated by the XMP-2000 spec. All has been running stable & smooth for weeks now. I like the subdued status LEDs on this board.

Cons: The MSI Overclocking Center software, which I just need for temp monitoring, is pretty lame. I downloaded the most recent online version and as soon as I run it, the alarms continually go off. I am guessing that is because I have the DDR3 voltage at 1.65v, per the XMP-2000 spec. I hope this software is improved over time.

Overall Review: I paired this up with 4GB of G-Skill F3-16000CL9D-4GBTD DDR3 & a Phenom II X4 955. I got lucky on the RAM, as I had not checked the approved list at MSI before purchase - G-Skill has never let me down though. From what I have read online, 1600MHz on the DDR3 with an AMD board is OK. All in all, MSI continues to be my favorite brand for products and service.

Pros: Great board at a decent price. The onboard sound is awesome, no need for sound card. The triple SLI is super sweet and really allows this board to kepp with the times. Looks good too. If you are looking for a great SLI board, look no further.

Cons: Some cons but not enough to take an egg away. If you use an aftermarket CPU cooler, be aware that accessing two of the four RAM slots requires removing of said cooler. Three PCI-Ex16 slots make for a tight fit, especially if your PSU is on the bottom of the case.

Pros: I bought this board after careful consideration and relatively positive reviews. The SLI feature as an option on an AMD platform is intriguing and the only alternative to Crossfire-based boards. The board shipped with the latest bios and had no issue properly identifying my Phenom II X4 955 revision 'C' cpu. I paired this board with G.SKILL DDR3 1600 7-7-7-24 1T@1.6v memory and after setting the FSB/ratio to 1:4 (and XMP profile memory timings), I was 'up' and 'running' at 1600 DDR3 speed with little effort. Additionally, the cpu overclocked from the default 3.2 to 3.8GHz at default cpu voltage. I also increase the NB frequency from 2000 (default) to 2400 with no increase in cpu-nb voltage.

Cons: The Phenom II X4 officially supports DDR3 1333 only. DDR3 1600 is consider an overclock. Although the G.SKILL memory I used is rated DDR3 1600 7-7-7-24 1T @1.6v, it absolutely refuses to run at CL7 on this board. So, it runs at 8-7-7-24 1T@1.6v. However, there appears to be success stories around with people running a select few 790FX boards (with beta or unofficial bios support) that allows CL7 to work with this type of high-speed memory. I am hopeful that MSI may release a bios that will support CL7 with this type of memory.

Overall Review: SATA ports 1&2 (from total of 6) do not recognize RAID-0 configs. Only after moving to port 3 & 4 did it properly boot my Windows 7 Ultimate 64 disc for installation of the OS. Mounting my Tuniq 120 Extreme cpu cooler required the installation of the memory sticks first as there is no room in slots 1&2 if you install this cooler.