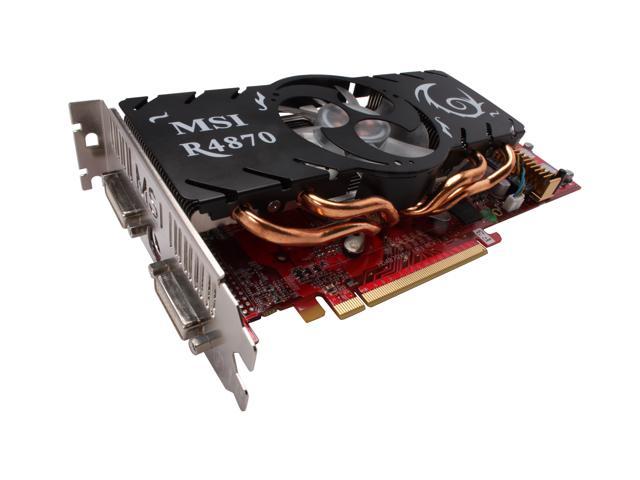 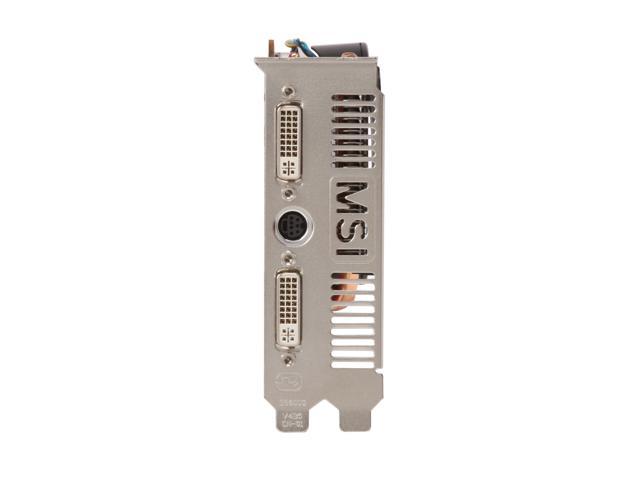 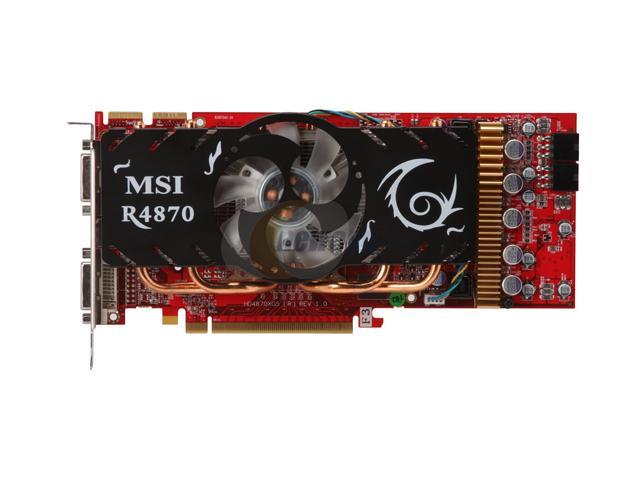 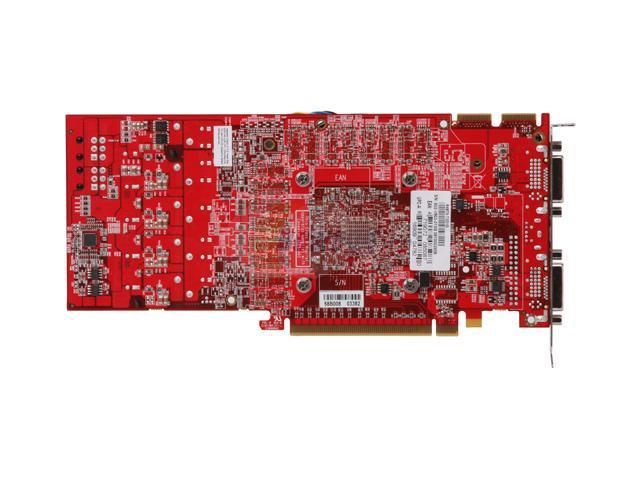 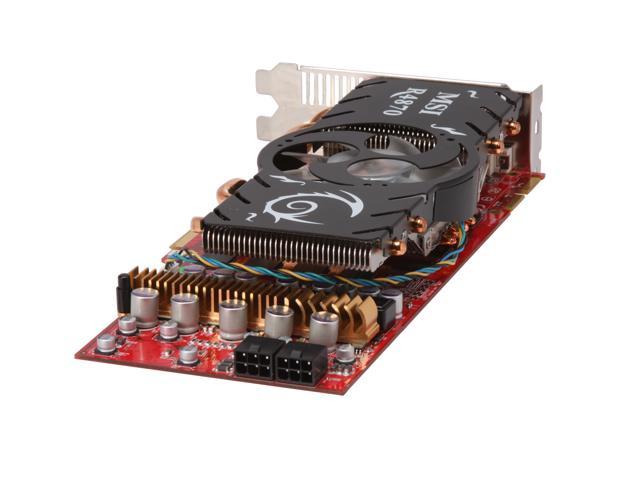 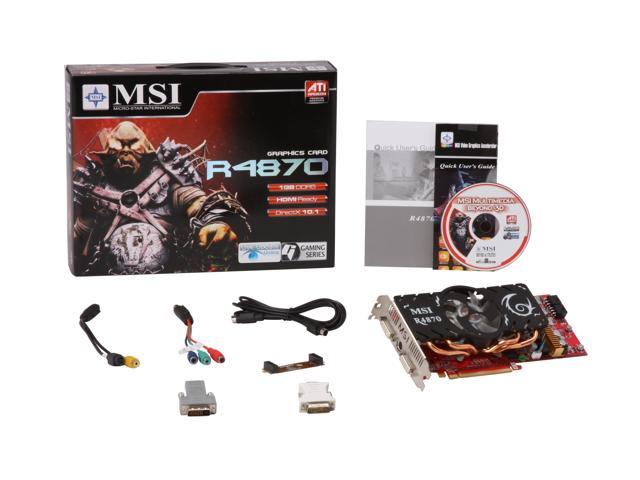 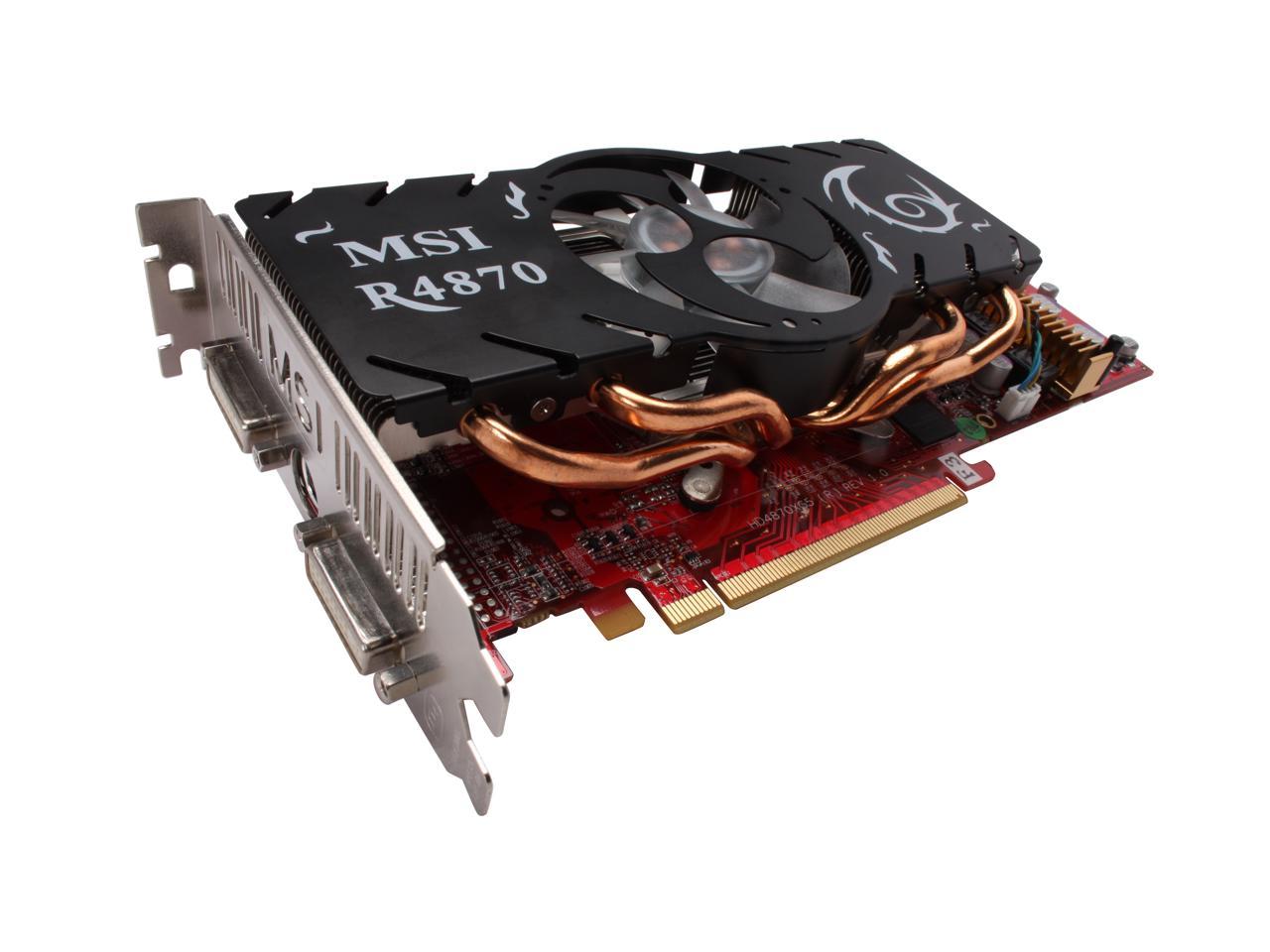 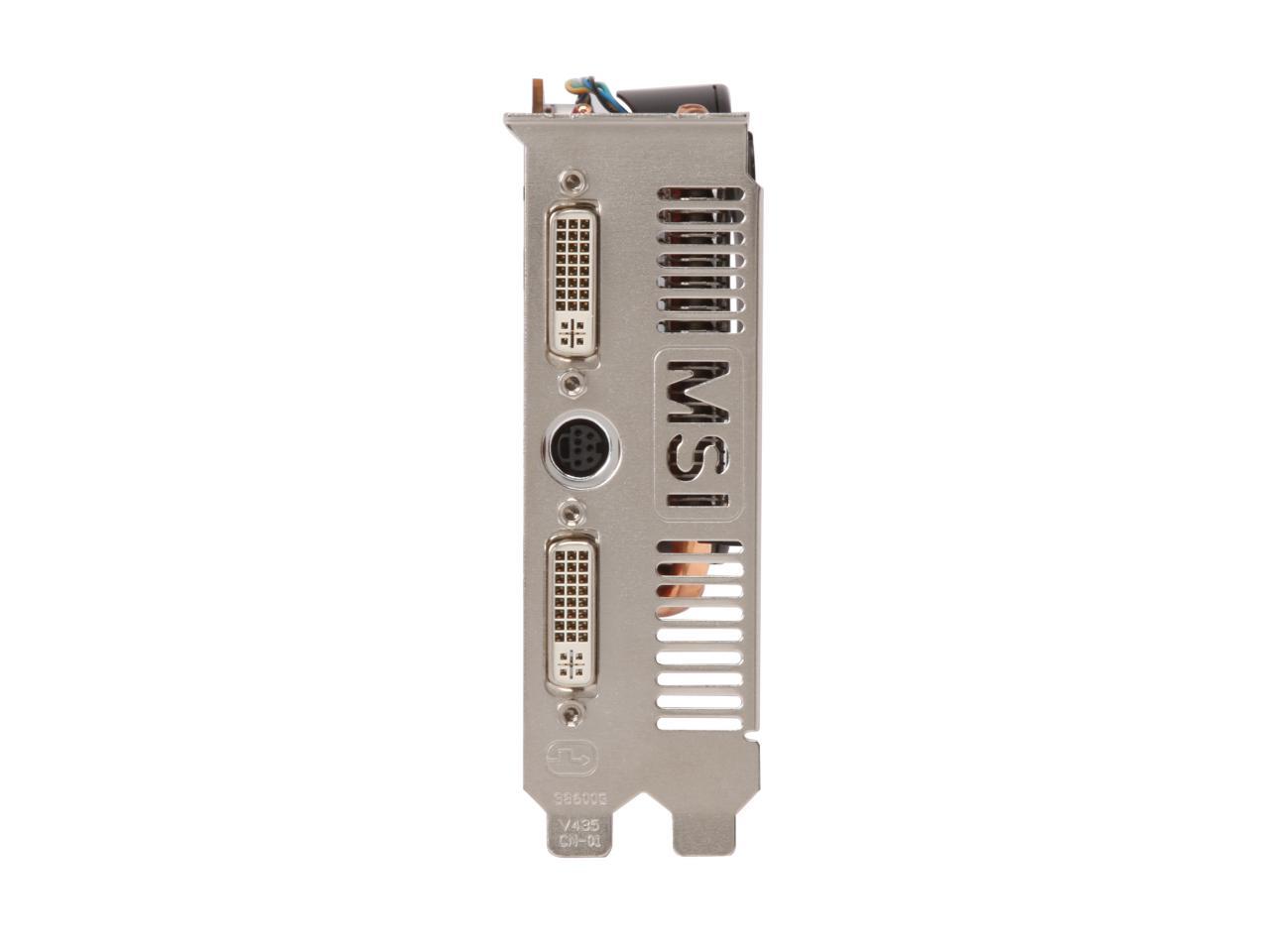 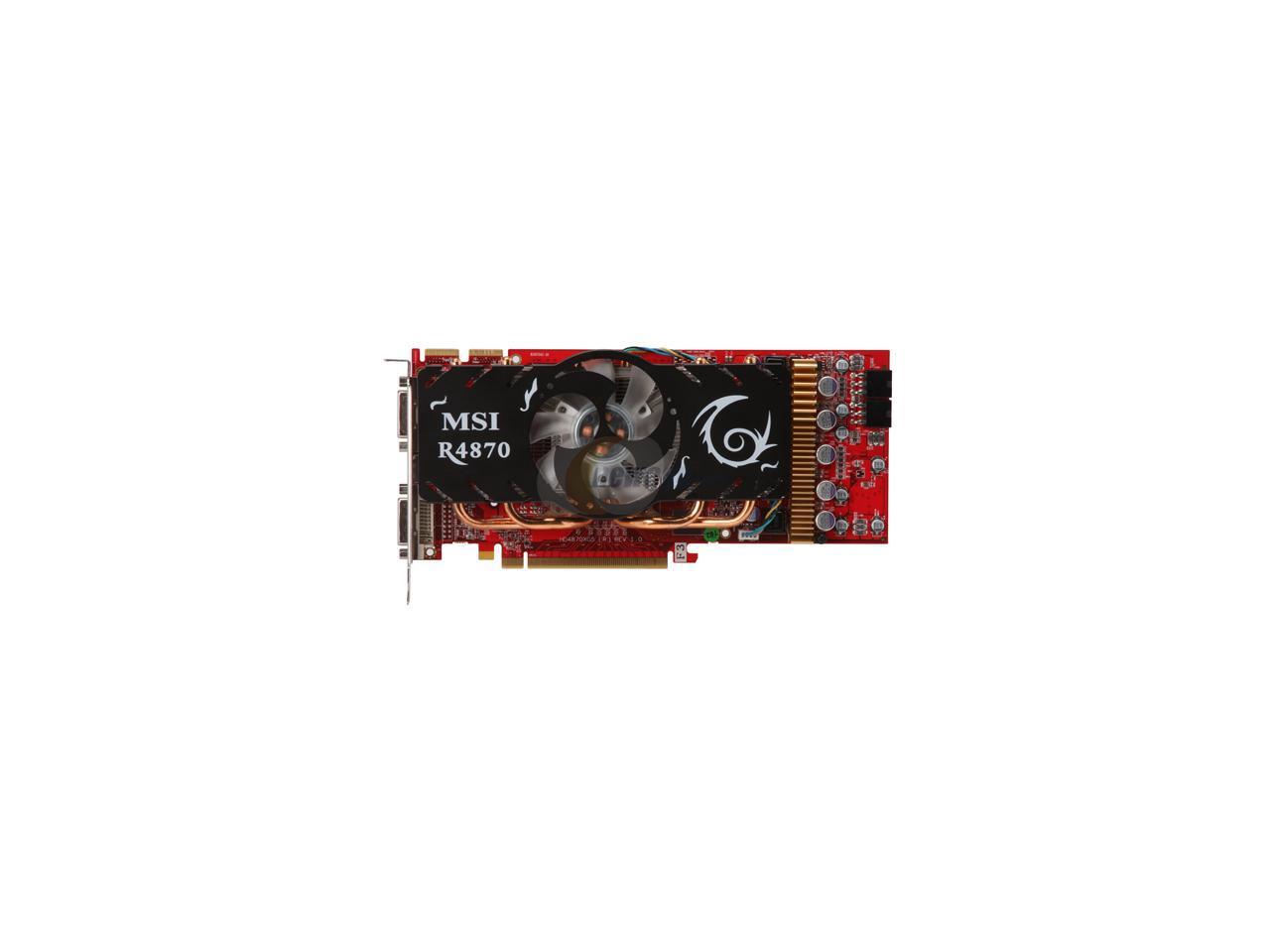 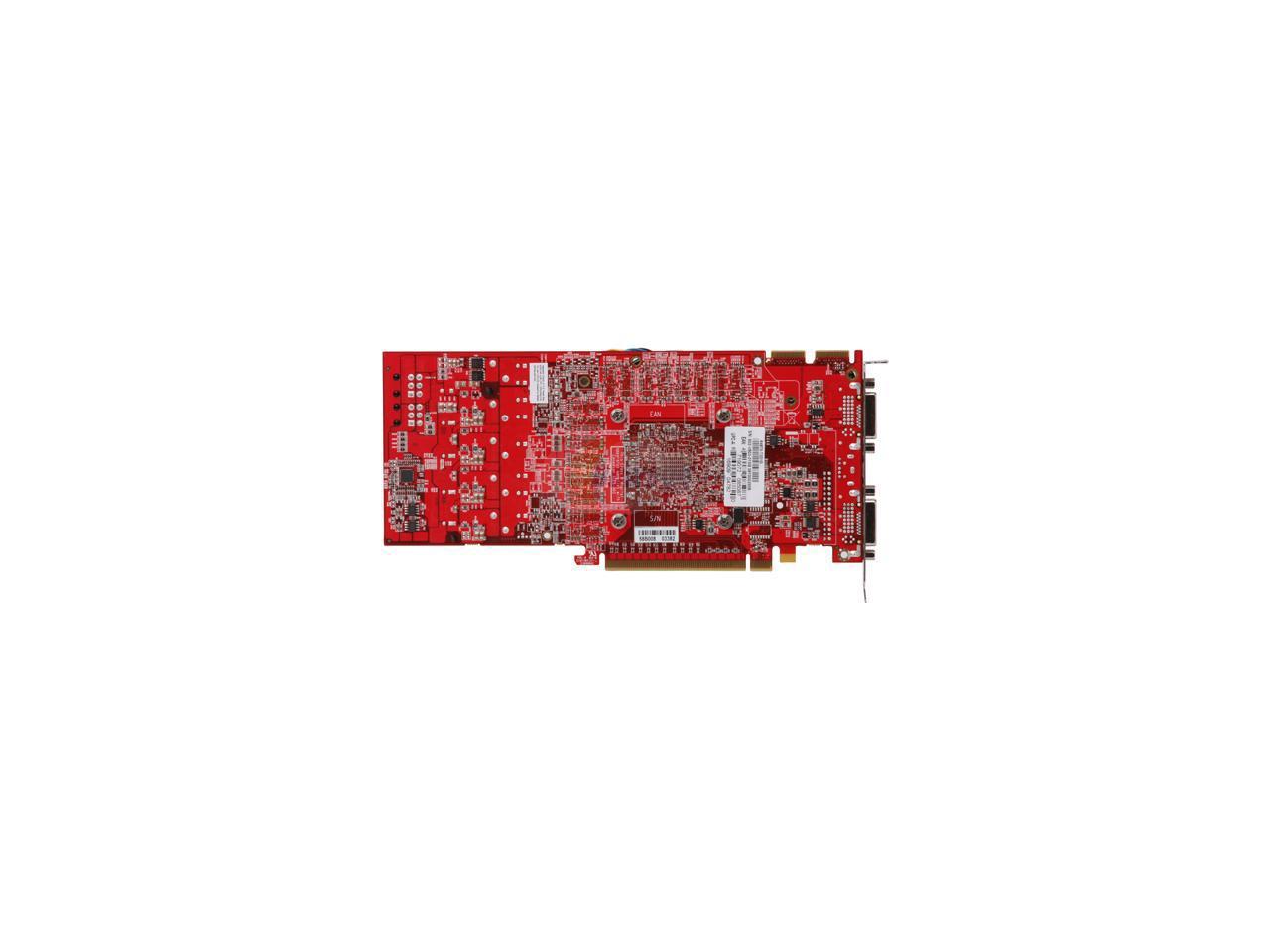 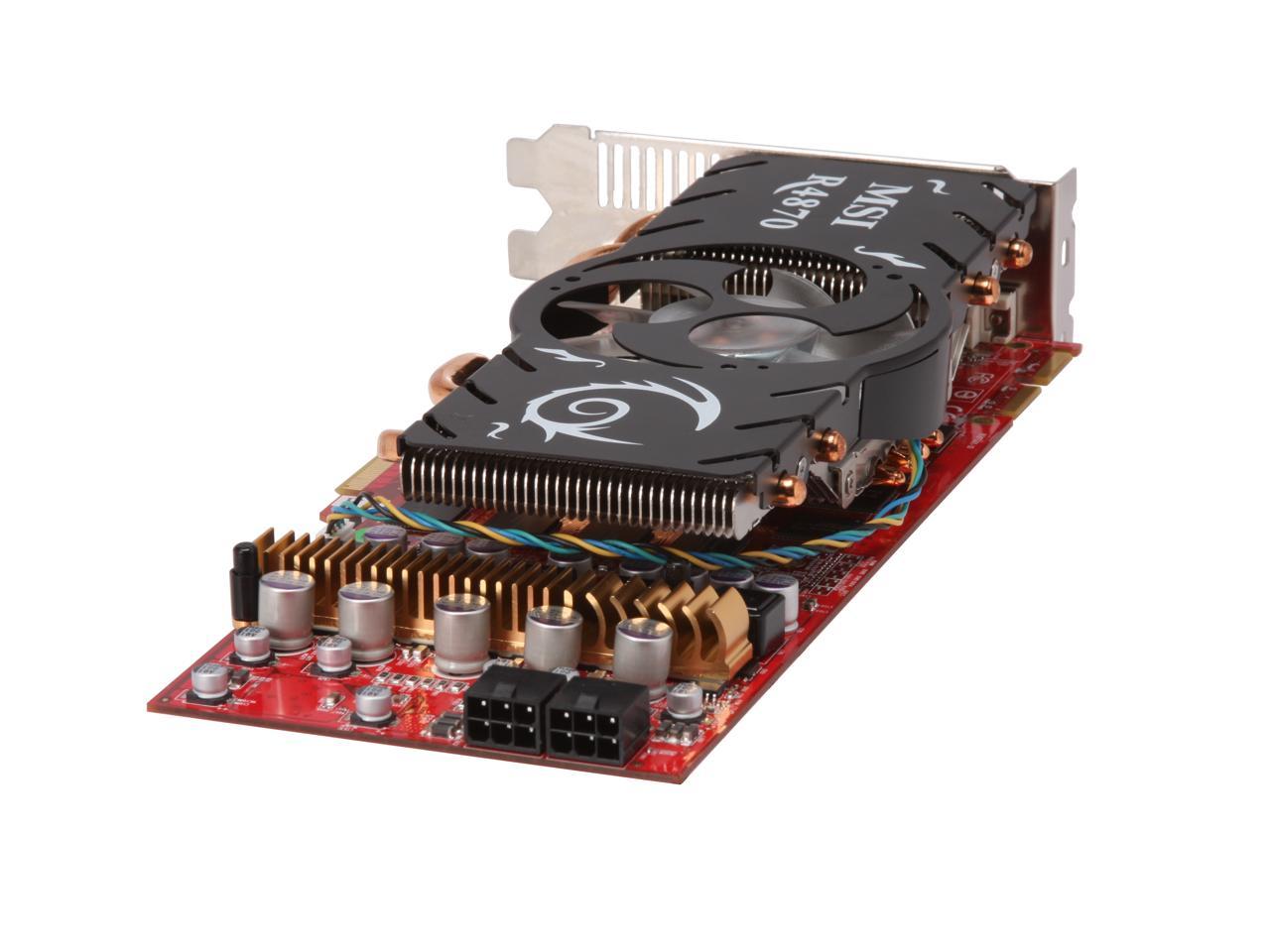 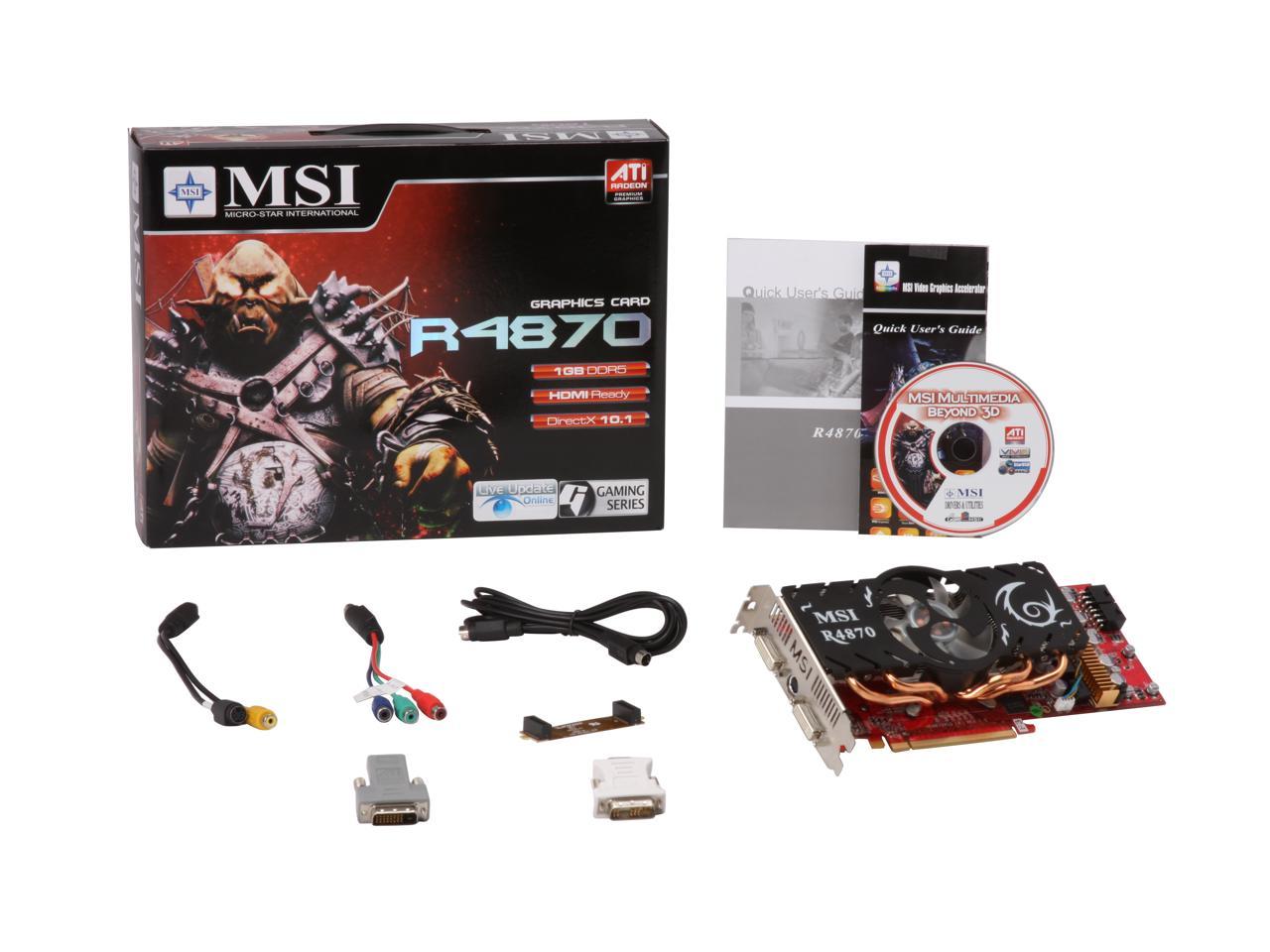 (45) Write a Review
OUT OF STOCK.
Overview
Specs
Reviews

Cons: ATI Overdrive maximum core speed limit is 790MHz. I had similar Sapphire card where max limit was higher. I expect this card would reach 800-820MHz stable core if it was possible. Power hog in 2D. I had my PC (Phenom II 940 running on Gigabyte GX790 MoBo) first running with onboard video and only used ~100W from wall at idle without Cool'n'Quiet. When I added this card idle power consumption jumped to 178W from wall! Green team cards are slightly more efficient at idle. 3D power consumption is reasonable. I noticed about 330W total peak system power when running 3DMark06. However, when I run OCCT GPU test power consumption raised to 350W.

Overall Review: To get back to reasonable idle power I created profiles for gaming and 2D use in Catalyst Control Center. For 2D use I set memory clock speed to lowest possible (450MHz) and power consumption dropped 30W! With now also Cool'n'quiet running my PC use ~126W from wall at idle. Since discovering this trick to save power I can now give all 5 eggs. HD4850 series cards support automatic memroy speed downclocking at idle and have significantly better power consumption. (In fact two HD4850's in Crossfire match a single HD4870 in idle...) Not sure why HD4870 series cards can't do this? GDDR5 limitation maybe?

Pros: I initially wasnt too impressed with my upgrade from a 9800GT OC+, but then I got to tweaking it a little. I used the "Auto-Tune" button in the settings to automatically overclock it (I thought Id try this first, since it probably safer than doing it manually). It went up to 780MHz core clock, and 1090MHz Memory clock. I turned on Crysis(since that games a hog) and was blown away at the difference. I ran all the settings on high with AA at 4x, and I was getting average 55 FPS, with the GPU running very stable. I thought it ran a little warm peaking at about 67C (in game with the fan running at about 40% speed) and running idle at 53C (on desktop). After reading up on it though, thats perfectly safe for an ATI chipset.

Cons: Ive read alot of whiny reviews here and Id say theyre all silly. Everything works great out of the box. The Fan is louder than other fans in my Antec 900 case when it starts to run above 40% in gameplay, but its really not very annoying at all. Also, if youre gaming, youre likely wearing headphones or have it cranking through speakers.

Overall Review: Overall Im rather impressed with this card. Ive only been using it for a day, so as long as it doesnt die on me, I imagine I'll stay very happy with it. I bet you could run all the overclocks to the max without damaging the card, but this is the first thing Ive overclocked, cause I dont normally see the need to risk your equipment, so I probably wont push it any farther. Im running this alongside a AMD 3.0ghz phenom II 940 black box(havent overclocked it, but after seeing the huge performance boost in the GPU, I may notch it up slightly), K9A2 Platinum Mobo, 4GB OCZ Platinum Mem, in an Antec 900 Case.

5 out of 5 people found this review helpful. Did you?
Anonymous
Ownership: 1 week to 1 month
Verified Owner
Excellent Cooling and Overclocking potential2/18/2009 4:44:11 PM

Pros: I have owned this card for a little over two weeks now. I overclocked it using ATI Tray Tools from 750 core and 3600 memory to 840 core and 4300 memory, with no hiccups, artifacts, and most importantly, acceptable temperatures. With house temperatures hovering around 70 Fahrenheit (21 Celsius), MSI's 4870 never rose above 160 Fahrenheit (71 Celsius) while running Crysis at High Settings at 60+ FPS for over a half-hour. A profile of my personal computer's airflow: I am running an i7 920 at 3.8ghz with a Coolermaster V8 running at the minimum fan speed, in an Antec Three Hundred Case, with 3x Silverstone fm121 120mm fans (2 front, 1 rear) running at minimum (800rpm) fan speeds and the Antec Case's top fan also running at minimum fan speed. I'm using a Corsair 650w PSU pumping air into the case and directly into my sound card, and not the 4870. Fan noise of MSI's 4870 is inaudible in 2D, and while audible in 3D, it is easily drowned out by typical, low volume gaming or music.

Cons: Though not a real con, artifacts appeared when overclocked to 850 core and 4400 memory. My own personal settings seem to be the limit of this card's overclocking ability.

Overall Review: I've played/tested MSI's 4870 in Crysis, Fallout 3, World of Warcraft, Company of Heroes Opposing Fronts, Call of Duty 4, Rise Of Nations, Far Cry 2, and a handful of other, less meaningful titles. All games played smoothly at 1600x1200 resolution with high or highest settings and varying amounts of Anti-Aliasing and Anistrophic Filtering.

Pros: The 4870 1GB is by far an away the best card in it's class. Regularly besting the GTX 260 216, market competition has made them cheap as hell. At 205 after mail in rebate this card is a BARGAIN that handles anything I throw at it with no trouble at all. This MSI model performs as well as expected and the cooling solution is quite effective, staying silent at idle and barely audible at full load. A bargain price for a fantastic card that smokes anything below a GTX 280.

Cons: I'm not crazy about the MSI logo cut into the PCI bracket. Looks stupid and slightly lowers airflow, but that's a really minor concern.

Overall Review: Bought MSI because it was the cheapest 4870 from a reputable dealer. Not unhappy with what I got. Highly recommended!

Pros: This card is as fast as I could ask for. Those who talk about the card running hot have a small case with bad air flow. I have a 120mm and a 140mm hitting the card and it runs nice a solid. Idle temps are around 50c and it only hits 58-59c while playing Far Cry 2. By the way, just one of these bad boys plays Far Cry 2 at 1920x1080 with ultra high settings and 8x AA. Specs: Aerocool Mastige case (modded of course) Silverstone 600W psu Phenom 9600 Agena 2.3GHz 4 GBs OCZ Reaper HD R4870 1 GB Gigabyte GA-MA790x motherboard

Overall Review: Love the heat pipe heat sink on top. This card isn't as big feeling as my buddies 4870 from HIS... Nor is it as loud...

Pros: Bought it for warhammer online.. plays it on full settings without a hiccup. Would recommend this card to everyone.. Ive overclocked it and still running very cool.. havent experienced any noisy fan issues either.

Overall Review: Would purchase it again if i could go back and do it again

Pros: Worked right out the box! Big card but thankfully I have a full tower case with plenty of room to spare. So far after playing warhammer for about 45 minutes last night the card temp never got above 50 Celsius with the fans manually set to 55% and it also ran warhammer beautifully. Even in a large warband with tons of characters on screen never had one hiccup ran smooth! Love this card so far!

Cons: No so far! I would just reccomend downloading the latest ATI drivers instead of the boxed MSI.

Overall Review: Great card for the price although be careful because if you plan on running 2 of these bad boys in crossfire make sure your power supply has 4 4pin connectors as these cards take 2 4pins each!

Pros: Excellent bang for the buck. The MSI version of this card performs better than cards that stick strictly to the reference model, so it's a good pick if you're looking at this series of card. The cooling on it is decent, and not deafeningly loud. Performance is why you'd spend the money for this thing, though, and it delivers there perfectly for the price point; it was a solid upgrade from my 8800GTS 512.

Cons: It's a large (and long) card, so plan accordingly. If you have a small case you will want to check dimensions before you pick one up and try to install it. The 8800 I had before was a large card, and this one is actually slightly longer still.

Overall Review: Download and use the newest driver package from ATI's site for the best results.