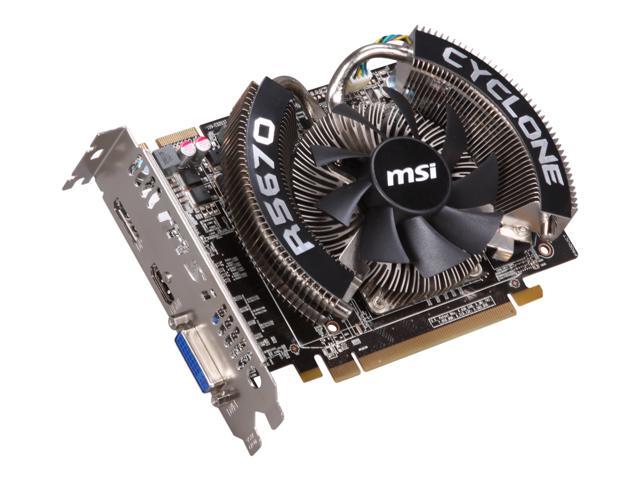 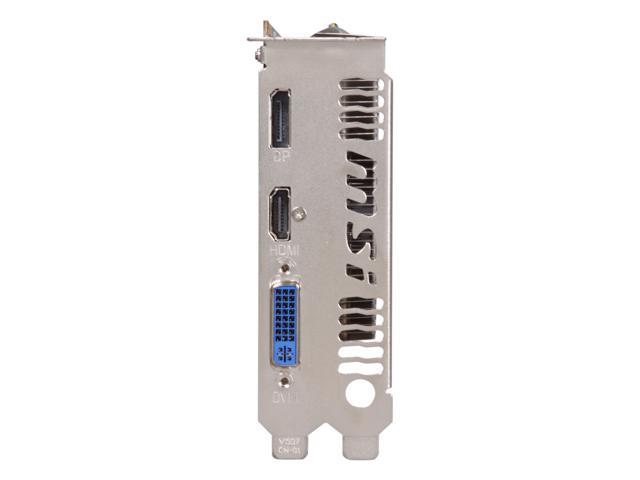 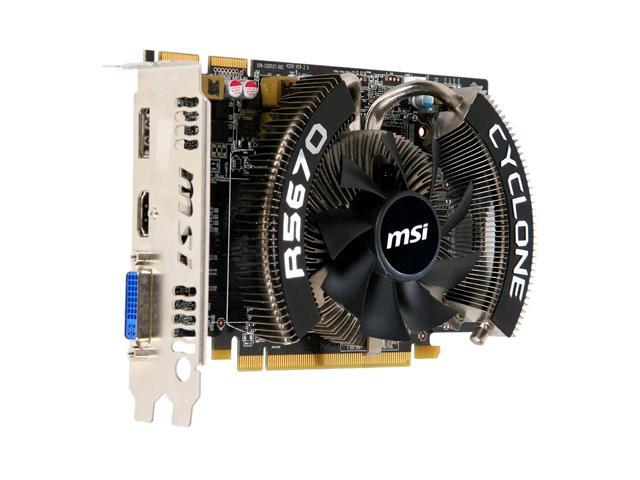 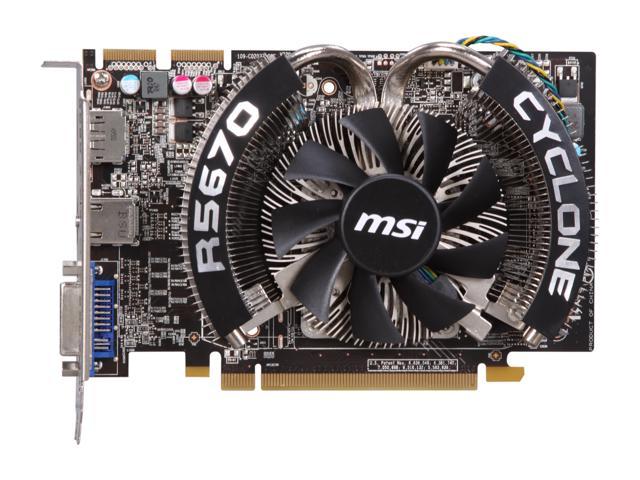 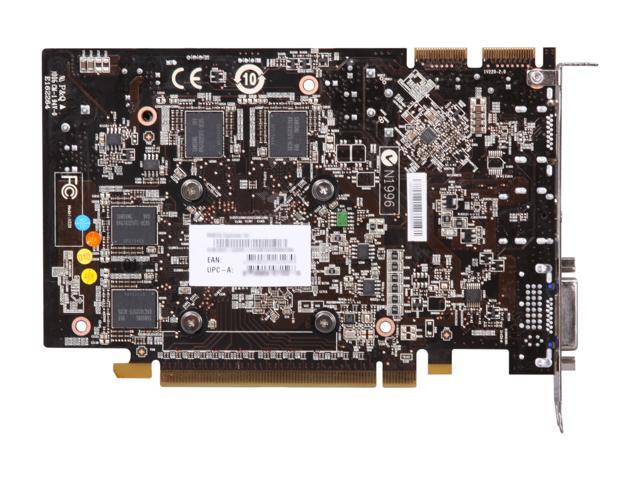 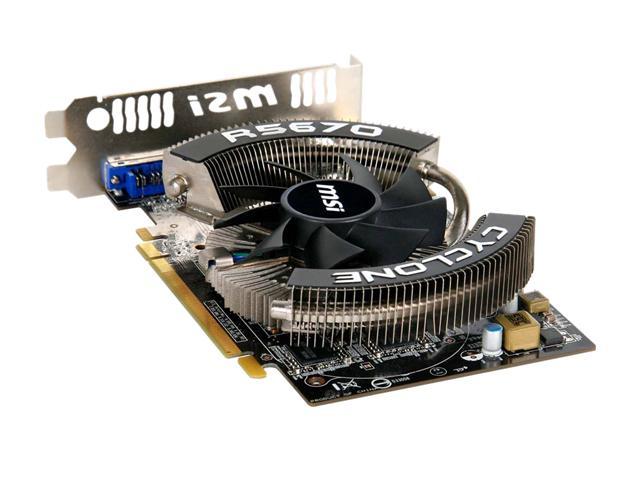 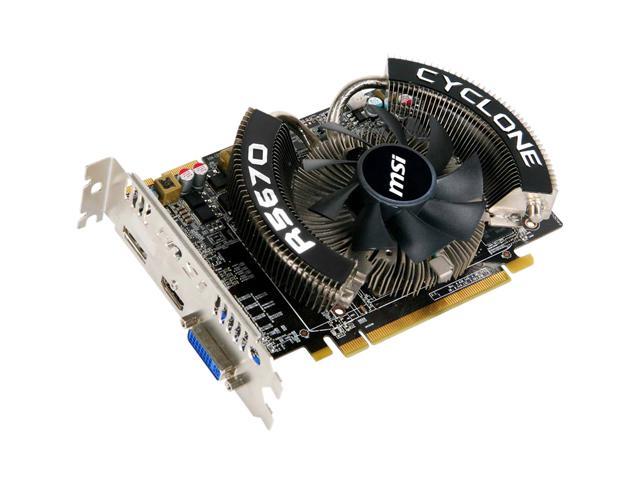 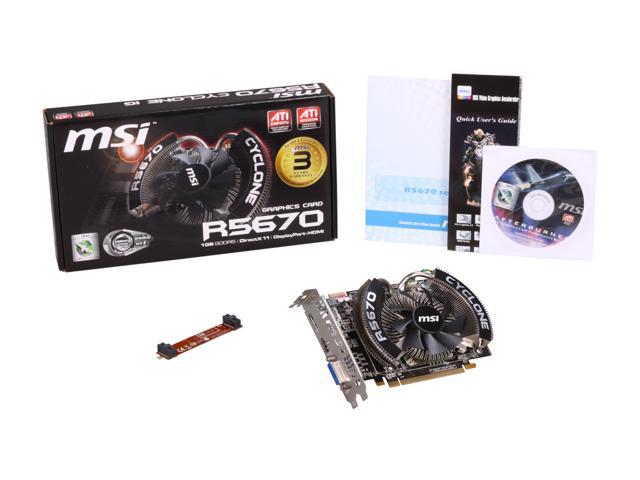 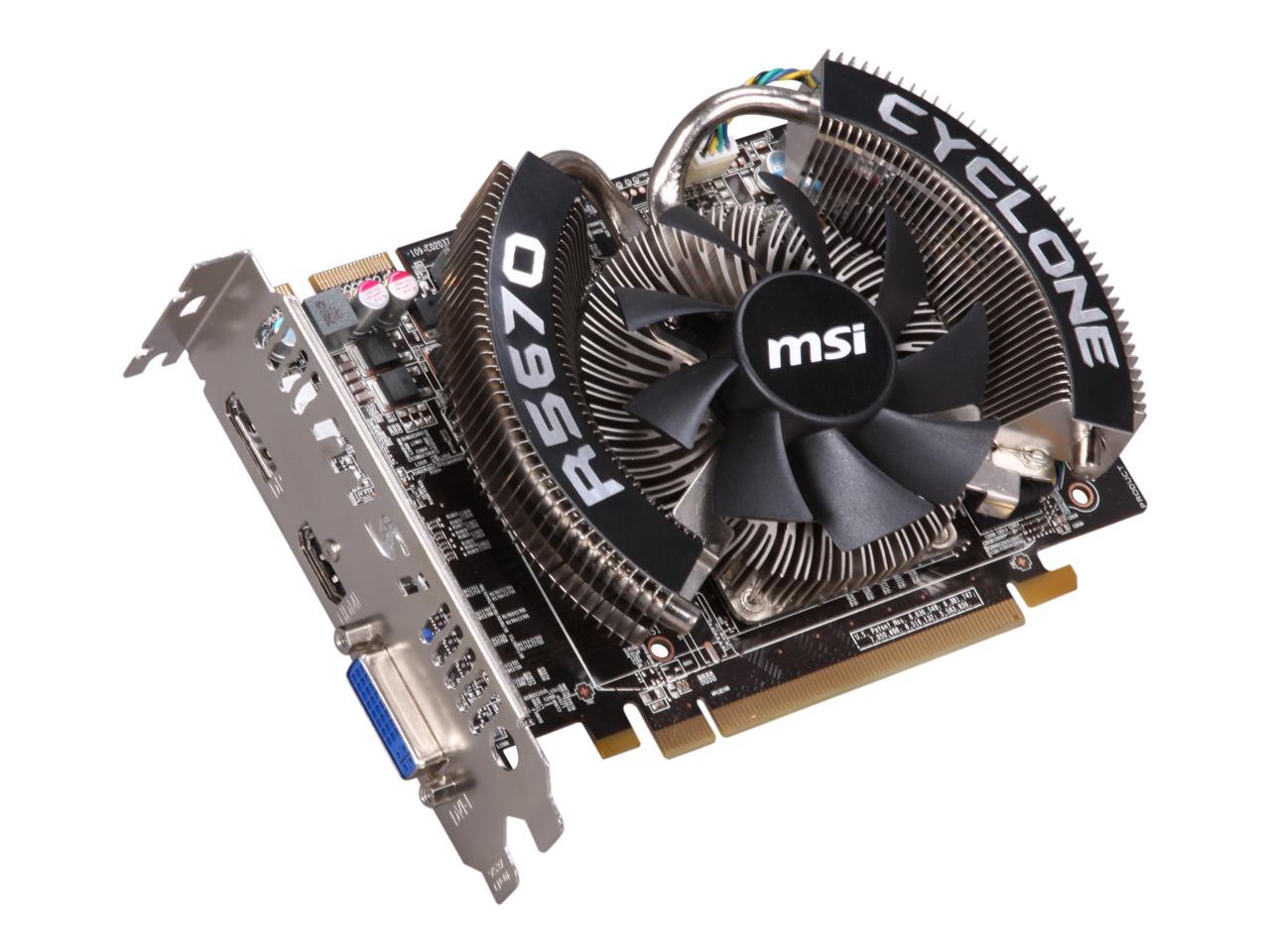 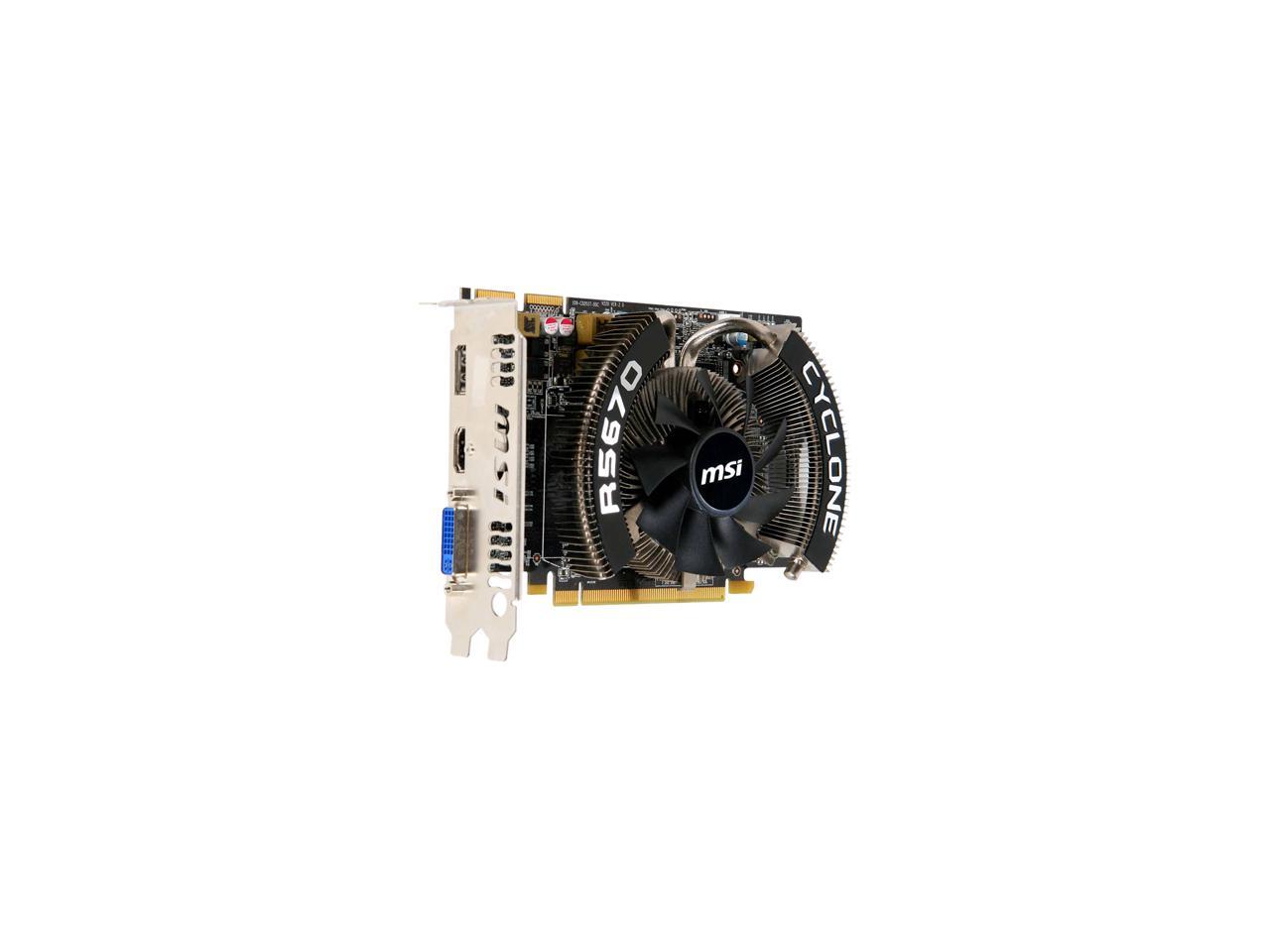 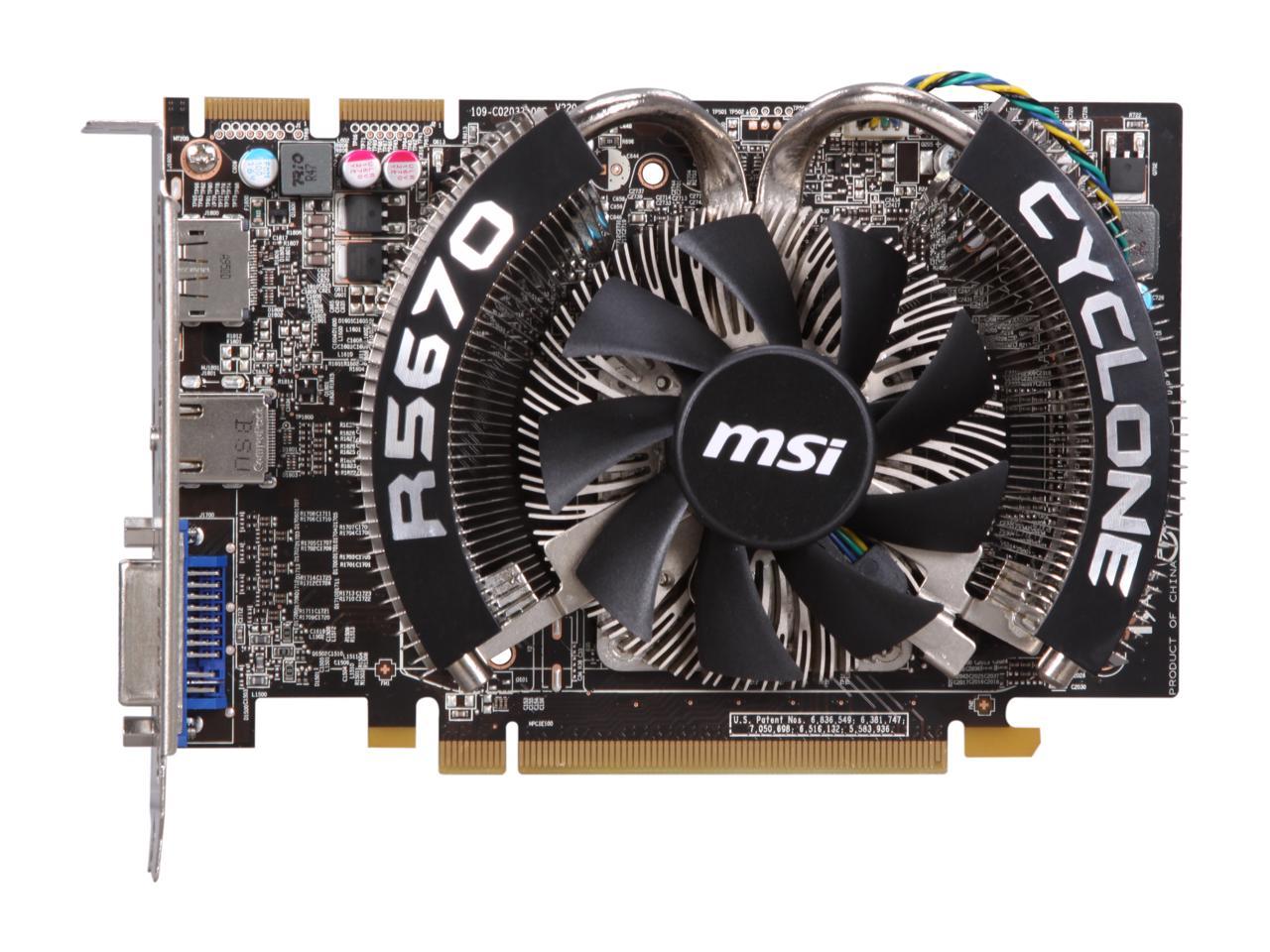 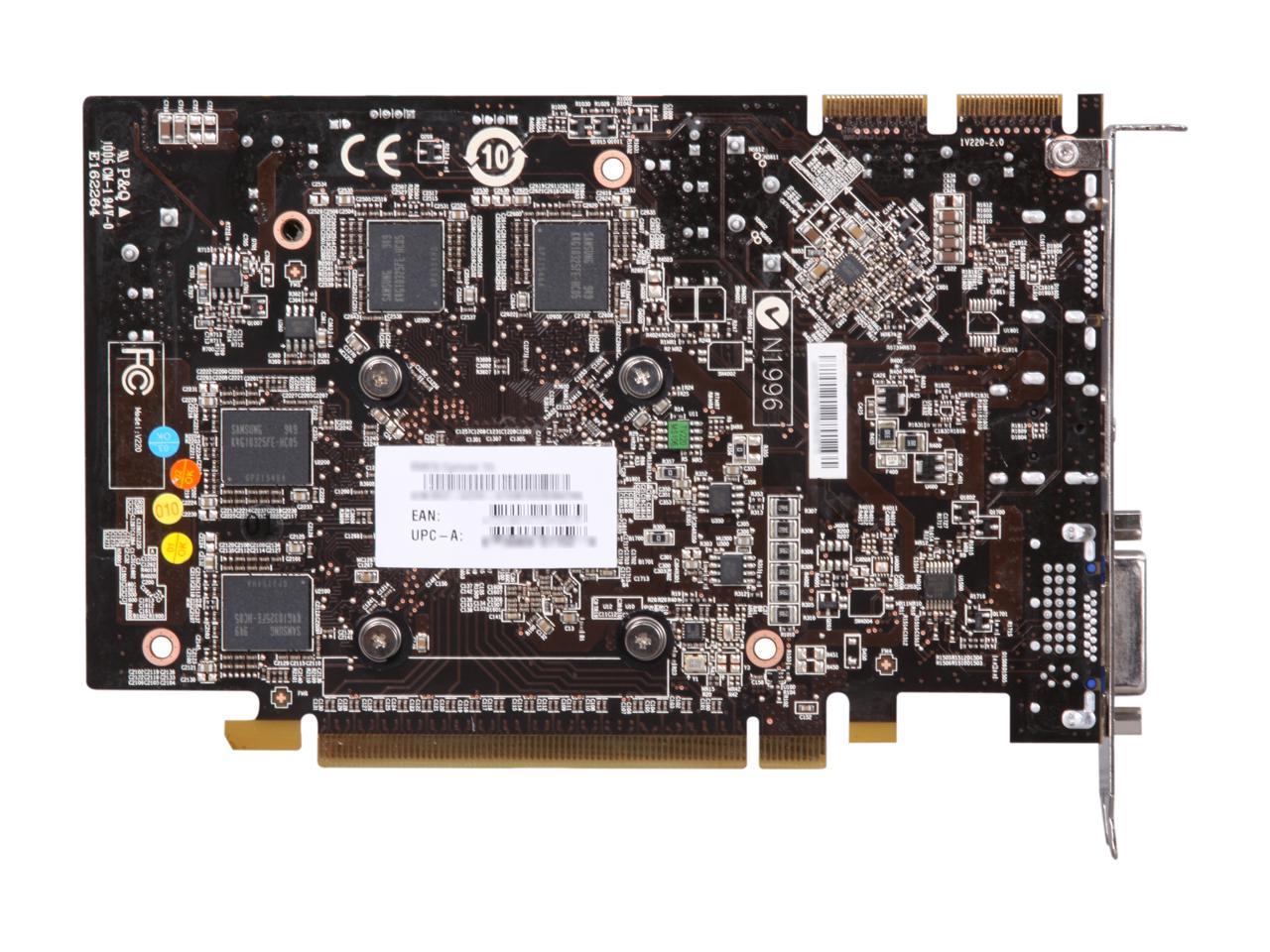 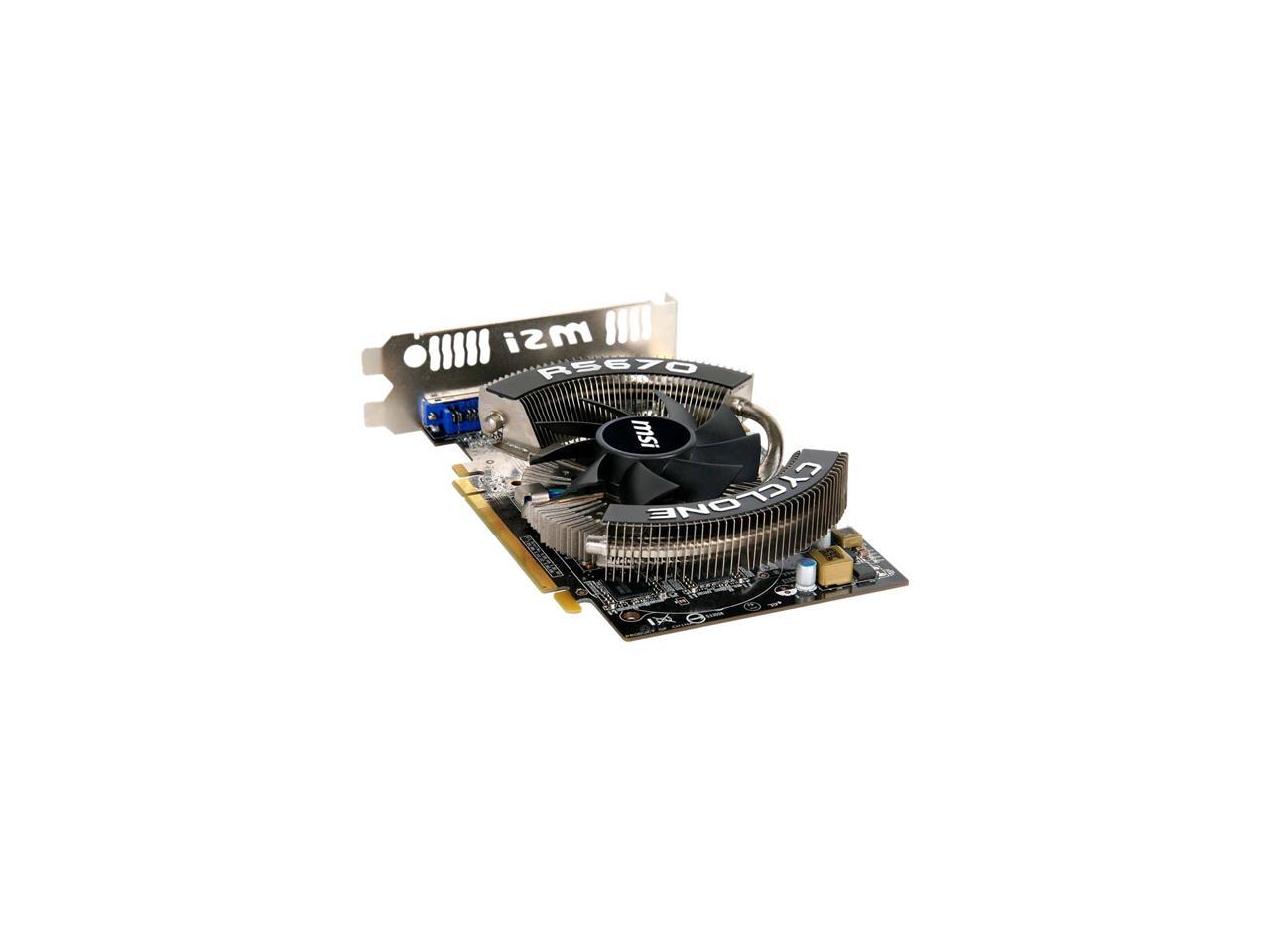 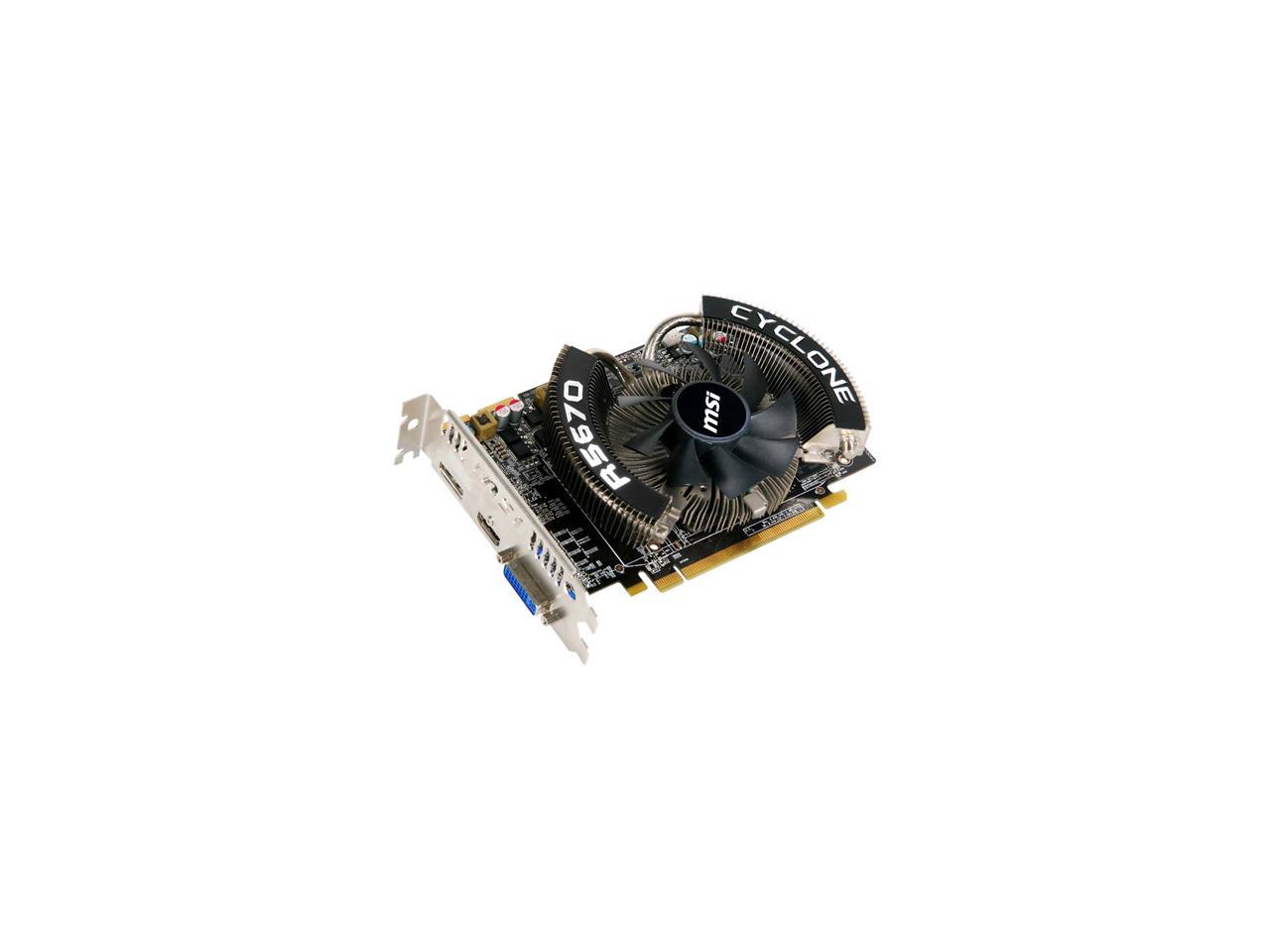 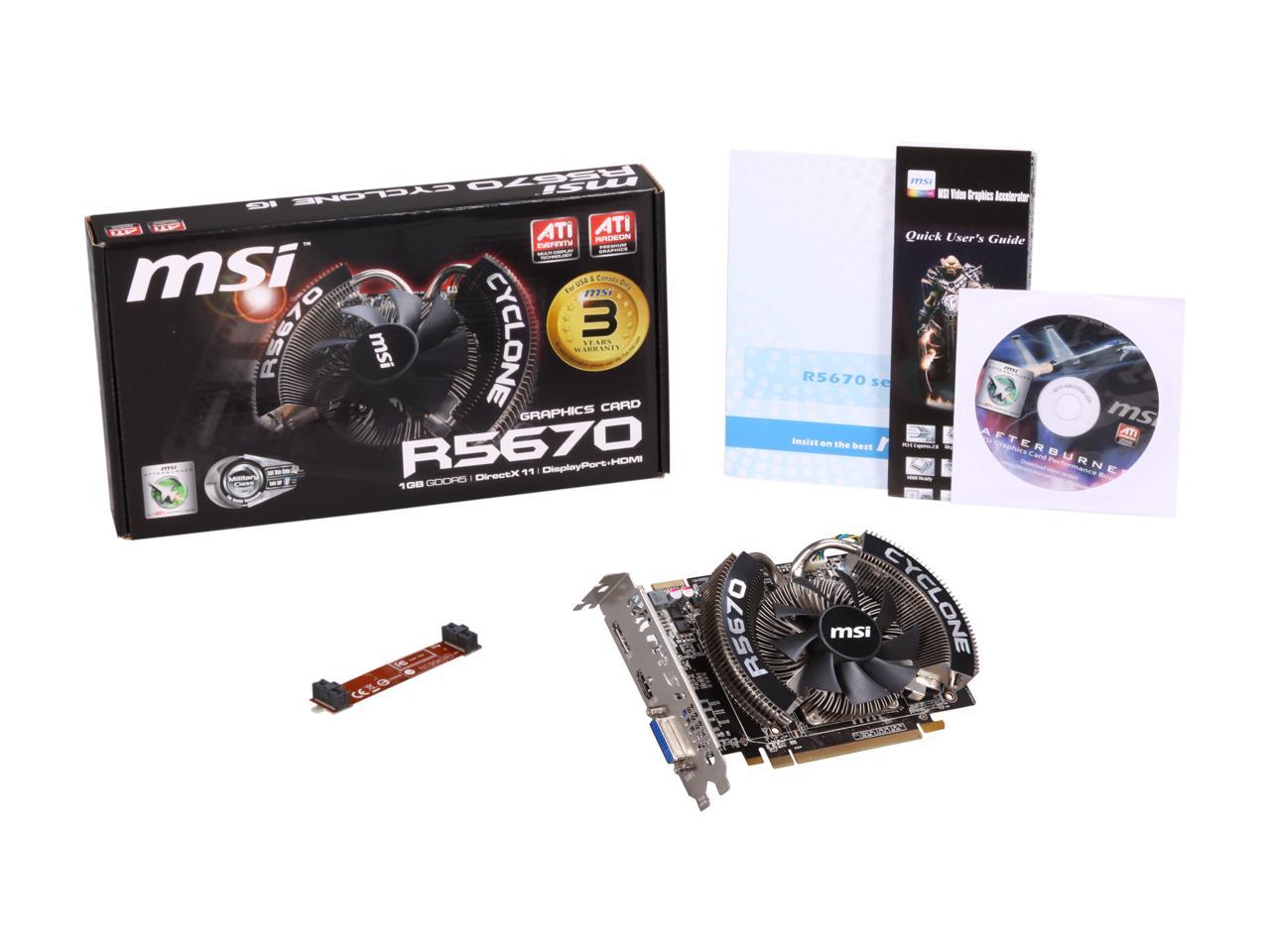 Leading international graphics card maker MSI has always been a key player in the competitive graphics card market. Thanks to its strong R&D capabilities and outstanding product performance, MSI's products have always received high acclaim by the media and consumers throughout the world.

Pros: So the pro's stay from my previous review... however.. the cons... well

Cons: DO NOT PURCHASE THIS CARD IF YOU ARE LOOKING FOR CROSSFIRE/. the cards that are sent from newegg, not only do not come with bridges... they aren't the same Dies on the boards. they dont physically HAVE the Crossfire slots... the board shown here is NOT what you get when new egg sends it to you... i now have two of these. with nothing i can do with them. and support told me they would send me a bridge if it was under $10. So good of them to listen. Newegg your dropping the ball...

Overall Review: NewEgg Failed. good card if you need one.

Pros: I bought it Open Box, so price was good (around $80). The thing weighs 3 pounds because of the massive heatsink on it, but it runs super cold. I used the Kombuster program that comes with it for about 8 hours overnight and it never got over 50c. With the Afterburner program that also comes with it, you can control the fan speed and make it run even cooler.

Cons: I use to use an overclocked 8600GT, http://www.newegg.com/Product/Product.aspx?Item=N82E16814130085 but it wasn't cutting it on newer games, so i upgraded to this card thinking it would blow my old one out of the water. After trying it out on a few games, I wasn't really that impressed. Also, my games would freeze up and then Windows would freeze up a couple seconds after that, causing me to hard reboot the PC. After much research, I'm sure its my cheap 450W PSU thats causing the freezes. Which may also explain the lackluster performance.

Pros: This card is way overkill for a media center but also very quite. I beneched it and it about par with my aging 9800gt. not bad for the card. Audio sound great.

Cons: pricy for the chip you get.

Overall Review: MSI support is terrible, I hope the card will not fail.

Pros: This was bought to replace a failed 8800GTS and actually outperforms my old workhorse. It is extremely quiet and uses such a low amount of power that it is powered solely by the PCIeX Slot. *** I have tried Warcraft at full resolution and settings with no issue and higher frame rates than I am used to.

Cons: You will lose a little bit of power compared to comparable cards in this price range but it is balanced out by the low power and noise.

Pros: Card worked great for gaming with all the GFX turned to the max.

Cons: Card stopped working after 3-4 weeks. Just went to turn on my PC one night and nothing but darkness.

Did you find this review helpful?
Manufacturer Response:
Dear Valued MSI Customer, We would like to apologize for the issue you have experienced with this particular VGA. Please email me directly via usersupport2@msicomputer.com your VGA's serial number and your complete contact information, subject heading "EAHR5670". I would like to help you get this resolved. Best Regards, User Support MSI Product Support
Micah R.
Ownership: 1 month to 1 year
Verified Owner
O_O7/30/2010 6:46:02 PM

Cons: Will sometimes get a glitch in it and freeze the screen. Sucks but you deal. Could be something else doing it but only started when I got this.

Pros: -Card is silent -Running dead cold with low fan speed -Play most of my game decent at 1050 res and some other really good -Bundeled software ( MSI afterburner ) are nice and easy to use -Price is forsure a pros -Small card fit in low end system

Cons: Only have 1 DVI port and no HDMI to DVI or Display port to DVI are bundled with. Not a big issue but it can be for some people. No french in the installation guide?? Some people may find it a bit hard but well, not a issue also.

Overall Review: I, for sure recommend this card. For the price the performance ratio is very nice and she can also do a sweet and powerfull HTPC card since she is NOT NOISY! Look tiny im my ATCS 840 to replace my GTX260 but she perform like a little monster:) Really happy!

Cons: Quite poor Blu-Ray video performance, very grainy in low light scenes. Swapped with a GeForce9800 in the same system and everything looked fine. Tried new drivers, nothing helped.

Overall Review: This isn't a high performer for games, bought it for Blu-Ray, that didn't work either, just a poor card.

0 out of 2 people found this review helpful. Did you?
Manufacturer Response:
Dear Valued MSI Customer, We would like to apologize for the issue you have experienced with this particular VGA. Please email me directly via usersupport2@msicomputer.com your VGA's serial number and your complete contact information, subject heading "EAHR5670". I would like to help you get this resolved. Best Regards, User Support MSI Product Support