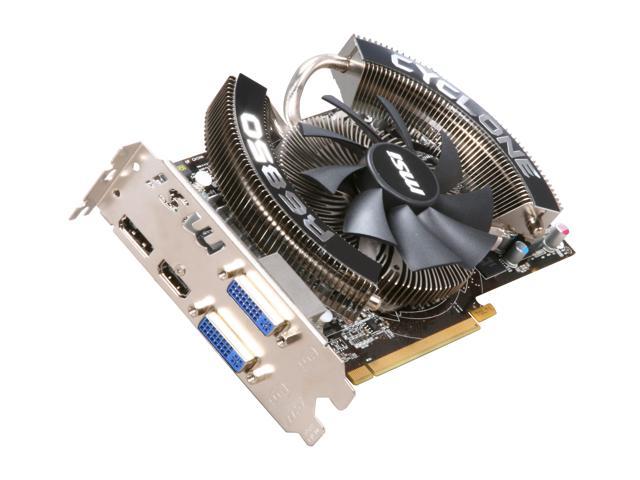 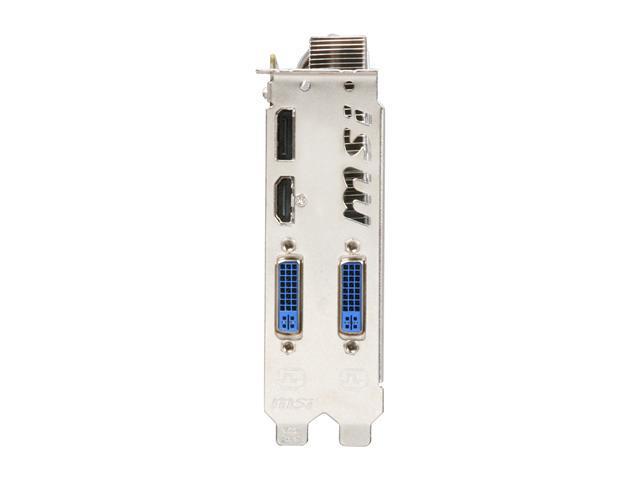 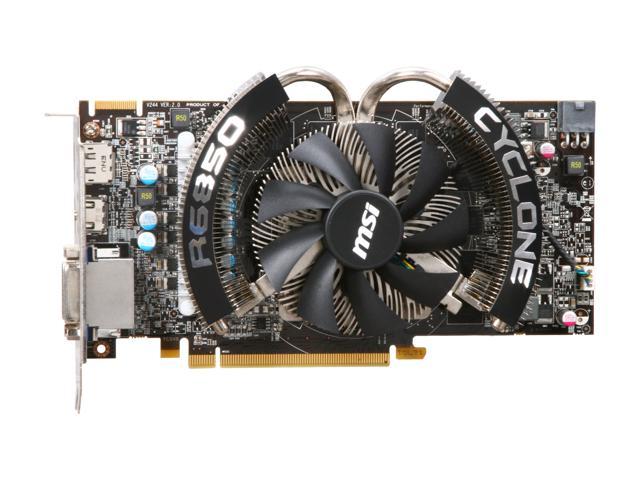 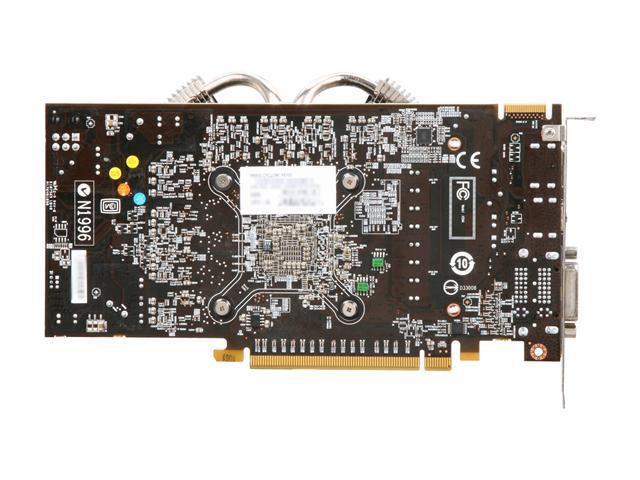 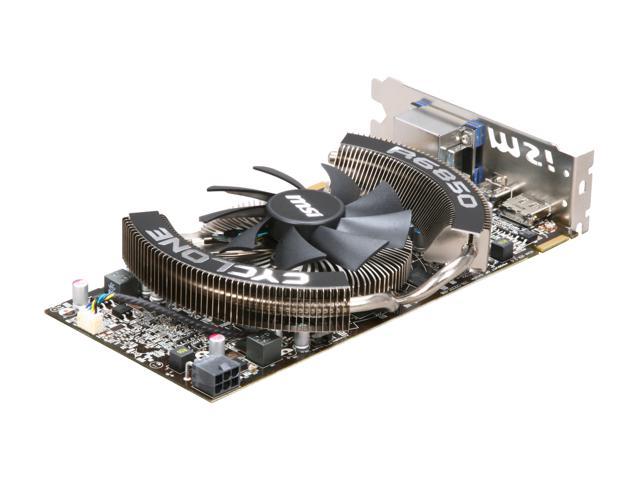 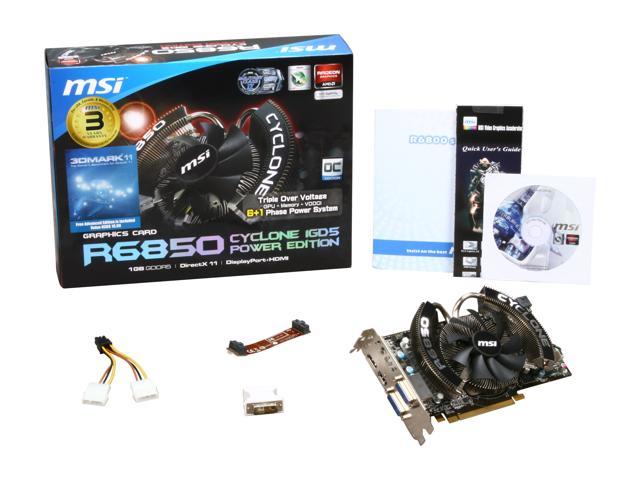 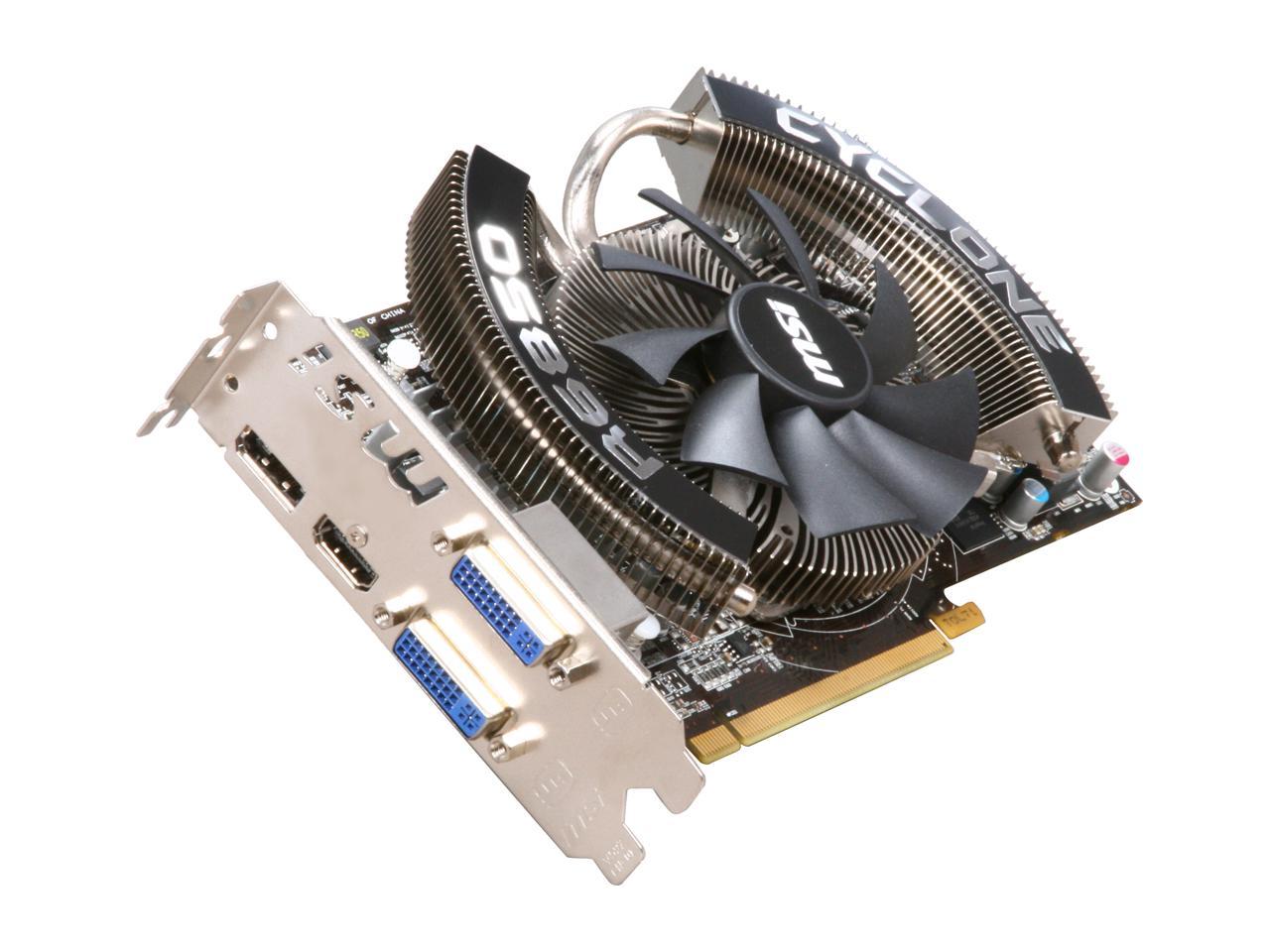 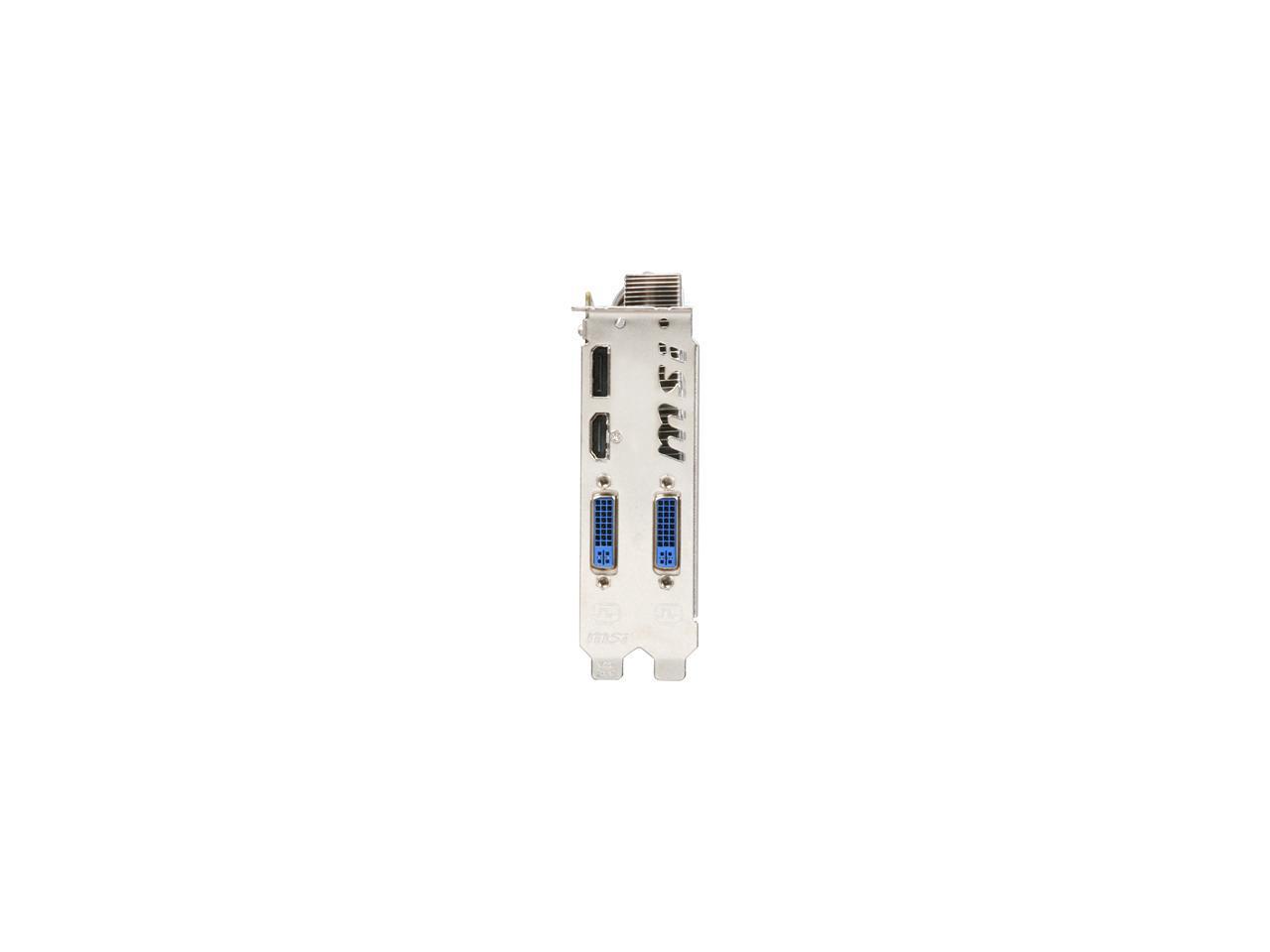 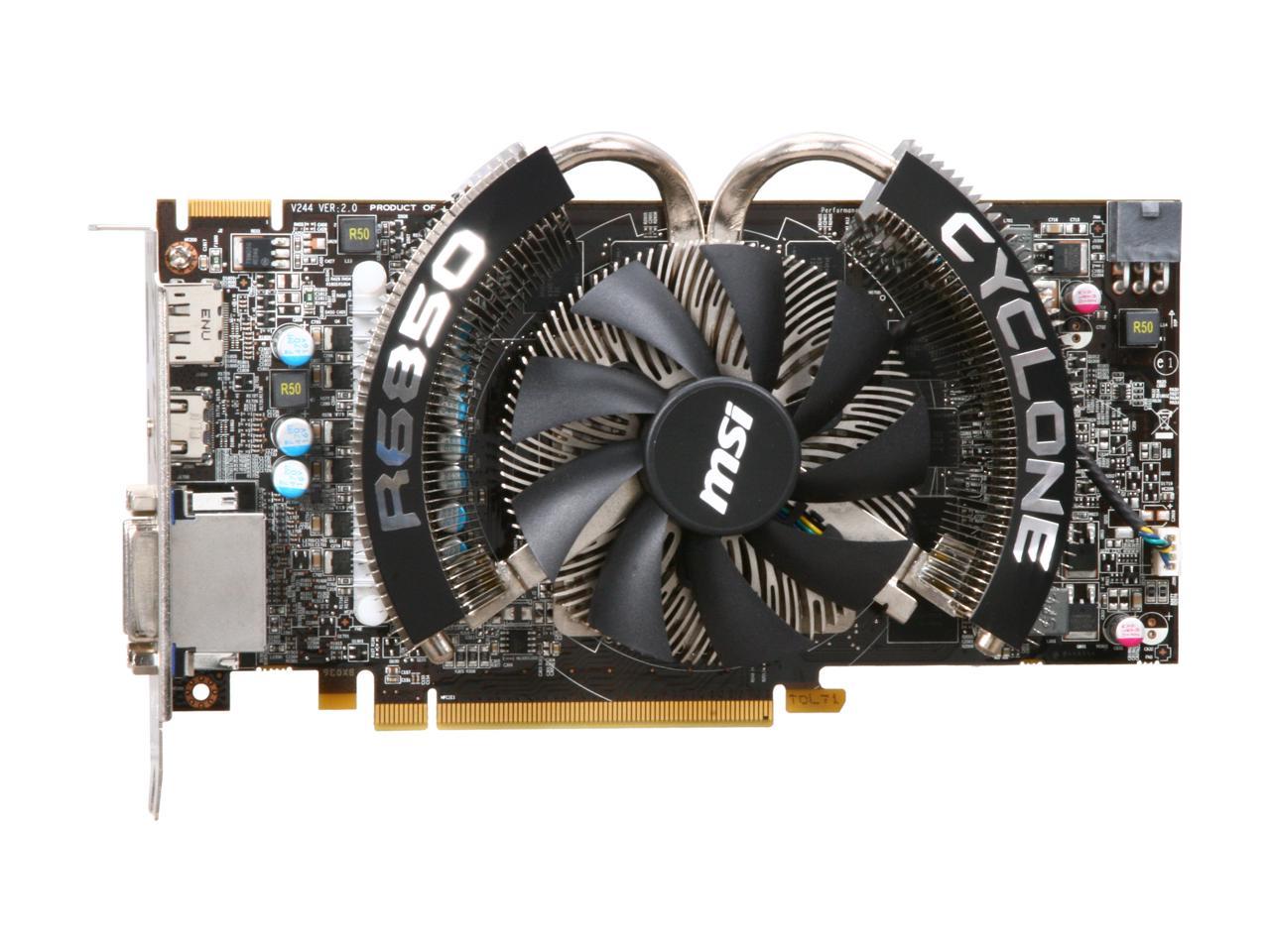 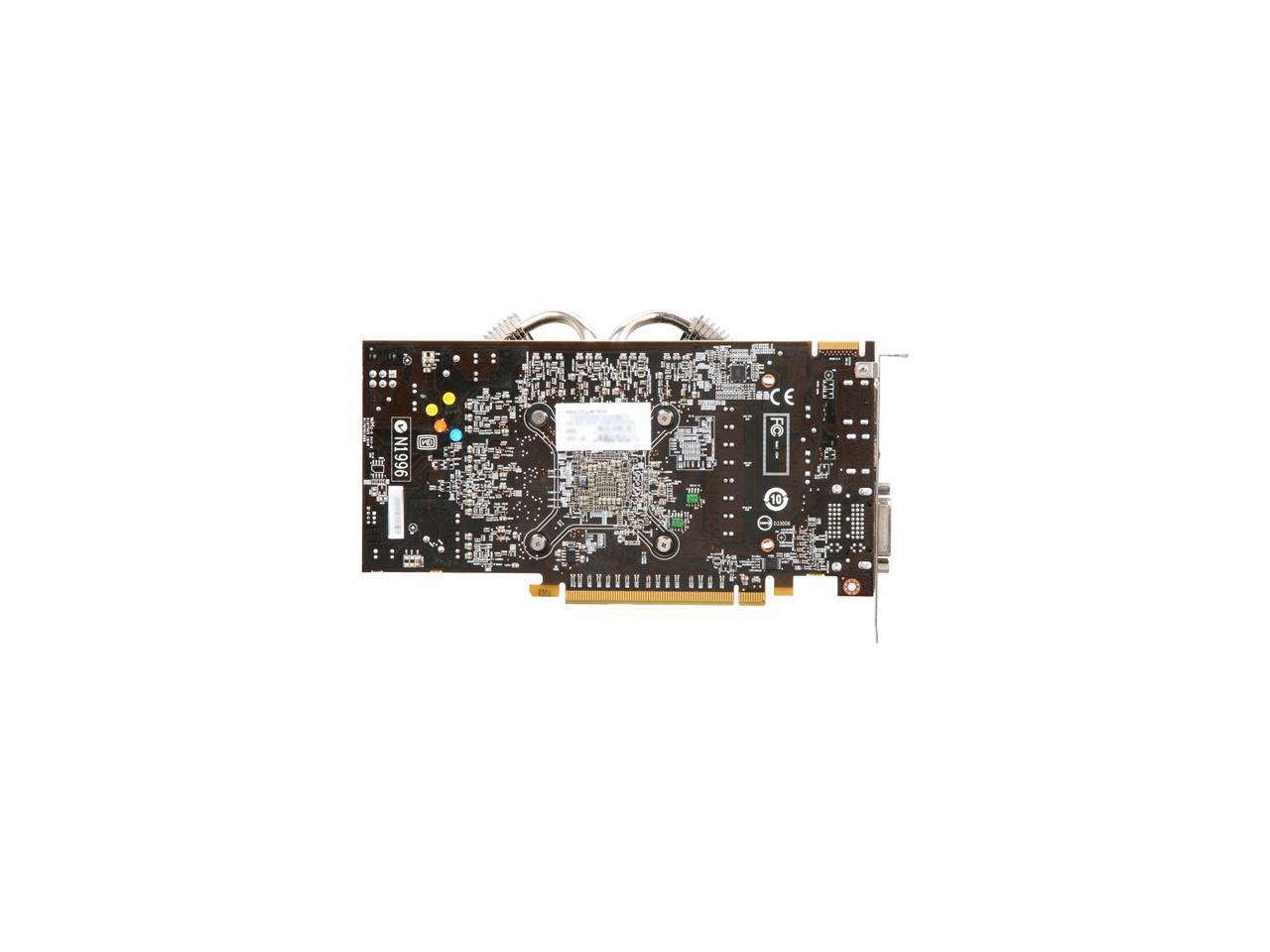 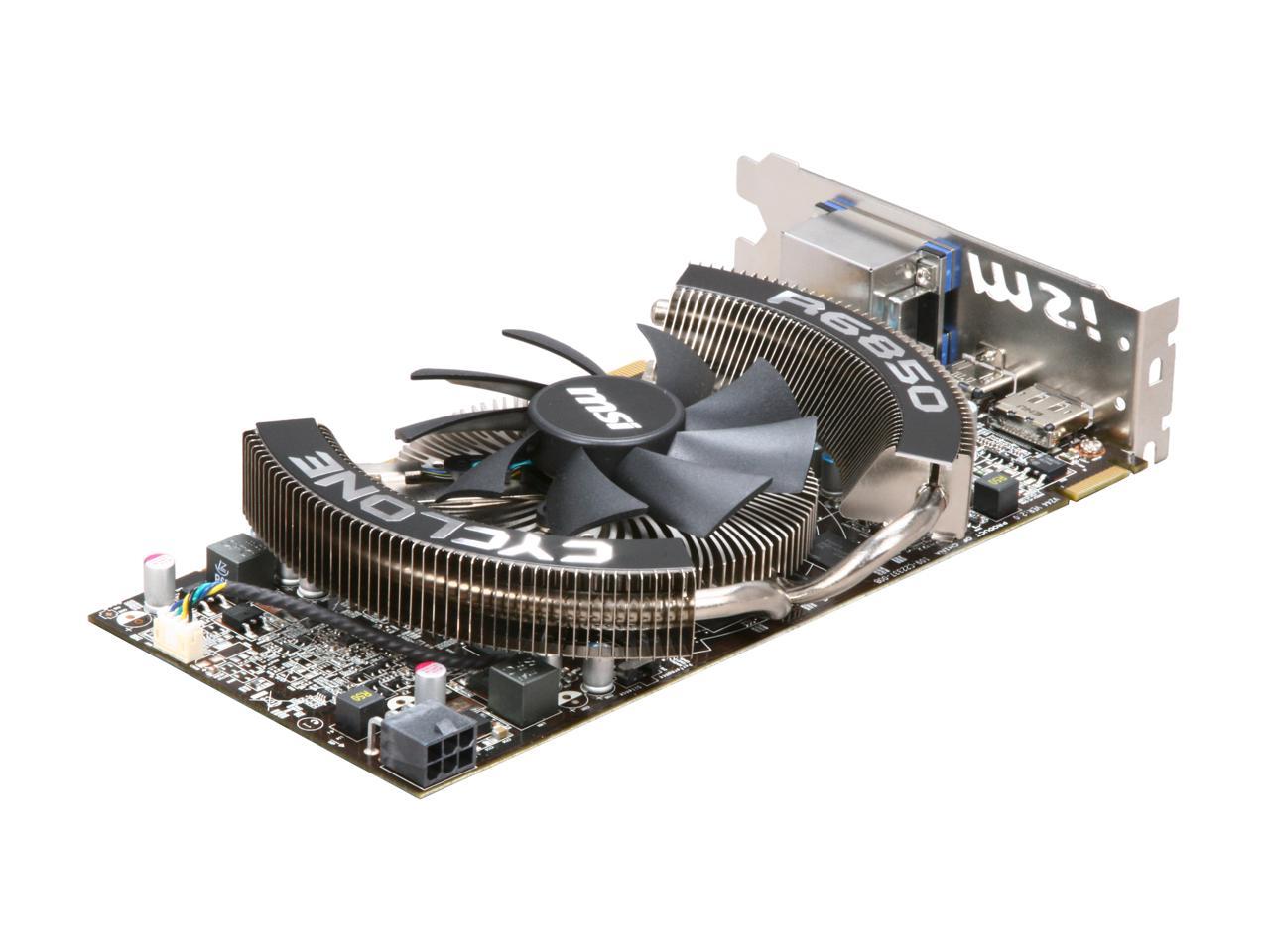 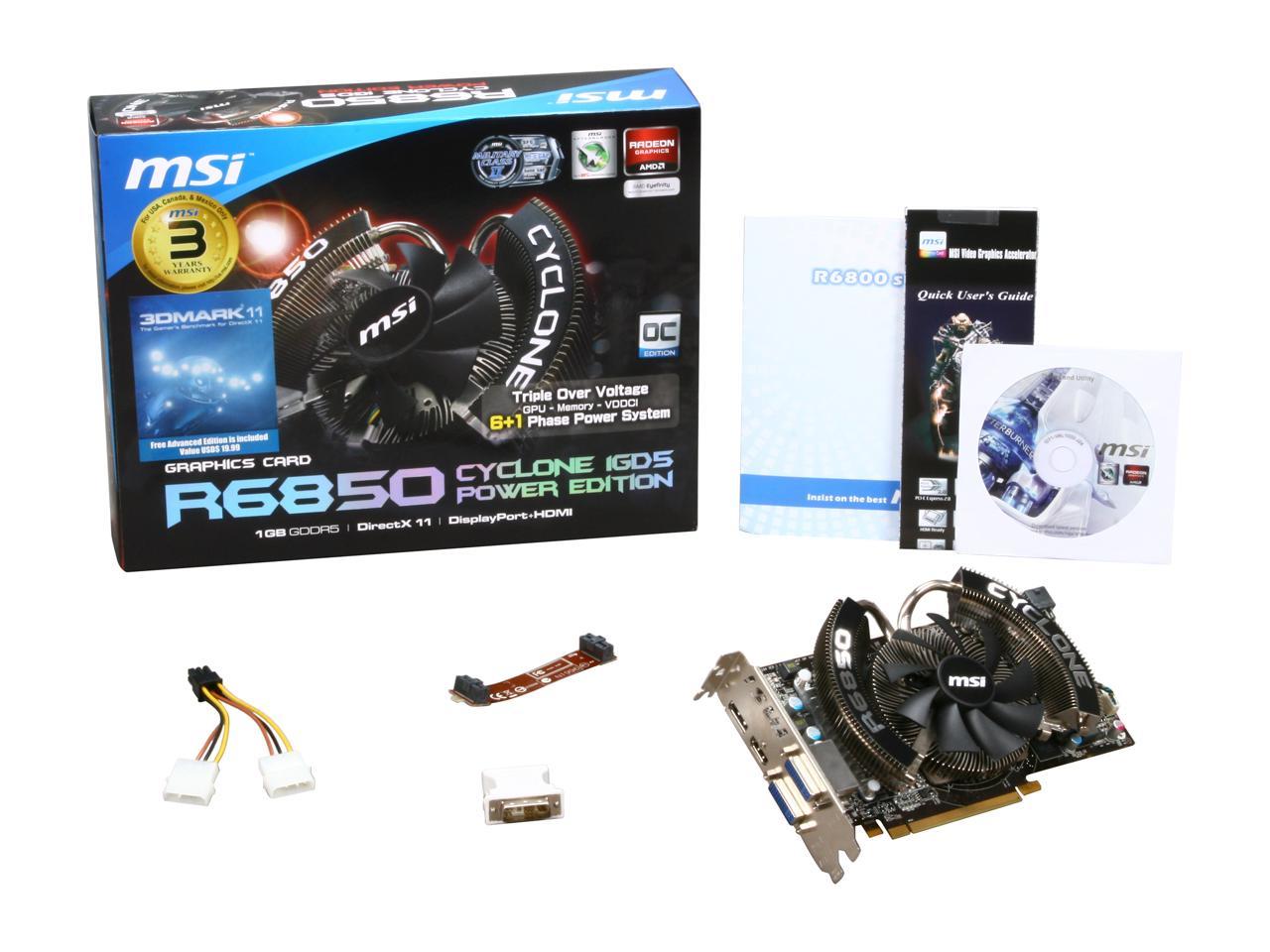 (72) Write a Review
OUT OF STOCK.
Overview
Specs
Reviews
Being the first Radeon HD6850-based graphic card supporting triple over-voltage functions, the MSI R6850 Cyclone 1GD5 Power Edition equips a 6+1 Phase power system to improve overclocking capability and stability. Also, the critically acclaimed Cyclone thermal solution can reduce the GPU temperature by up to 14-degrees and lower noise by 4dB versus the reference design under full-speed operations. The exclusive P/S Switch allows you to easily adjust fan speed between the Performance Mode and Silent Mode. What’s more, the R6850 Cyclone 1GD5 Power Edition is built with the latest MSI Military Class II materials to ensure the best power supply quality, stability and lifespan. Overall, the R6850 Cyclone 1GD5 Power Edition is one of the most powerful Radeon HD6850-based graphic cards with the most functions and highest quality.

Pros: This device works great with Win7 32bit & 64bit & Ubuntu 10.10. Pay no attention to those who say it does not. Load AMD Catalyst Control Center (running BIOS Version 013.009.000.004 ...dated 11/25/2010). I'm running two ASUS VH236H monitors from both outputs on the card. Different windows open on each monitor, perfectly. I don't game very much, but this CPU and GPU can run FarCry2 in UltraHigh max settings extremely fluidly. No stutter, no crashing, no glitches at all...and I've played for 6 hours at a stretch @ hardest level. I don't see what the problem is, (especially for someone with HIGH tech knowledge) heheh. High tech knowledge is reserved for those who build PC's 24x7x365 for a living. Get real. I'm a computer networking engineer who hobbies with personal computers. I don't know everything, so I have to ask people on forums and read a ton. And I've been computer geeking, only since 1988. This card kicks major tailfeathers (so far).

Cons: I didn't purchase two of them. (but I'm limited by my PSU at present). I was looking at the MSI 5770, and purchased this GPU before there were any NewEgg customer feedback ratings/comments. I'm glad I went with my research and gut instinct. This card cools wonderfully, and delivers the goods. And works with XP/Win7 (32&64bit) and Linux Ubuntu.

Pros: I just got mine a week ago and have been thrilled with this thing. It's the fastest clock speeds out of the box compared to the other 6850's. Playing Bf:Bad Company 2 at 1600x900 with all settings on high is very smooth. I have no lag or screen tears even with 32 players in server and dead smack in the middle of a huge battle. I paired this card with a new system: AMD Phenom II x6 1055t 2.8ghz @ 3.5ghz 4GB Gskill DDR3 1600mhz Asus M4A89GTD PRO/USB3 Motherboard Seasonic 620watt PSU For the price this videocard is tough to beat with the MIR. Hardocp.com just posted up a sweet review of this card. Check it out if your considering this thing. They gave it a gold award. ;)

Pros: * Fastest 6850 series card out of the box on the market * MSI's non-reference design is the most energy efficient, quiet, and cool of all 6850 series cards on the market!!! * MSI's card is hefty, solid, and easy to clean * Voltage is unlocked for user manipulation during overclocking * Overclocks like crazy!!! * 3 Year Warranty My MSI 6850 overclocks with complete stability to the tune of a 965Mhz core clock and 1165Mhz memory clock, compared to the 775Mhz core and 1000Mhz memory reference clock speed without a voltage increase whatsoever! I used the MSI Afterburner utility to achieve these results and ran continuous tests with MSI Kombustor and 3DMark 06 to assure 100% stability. I can without a doubt achieve better results with slight voltage increase, yet why bother when I am running 18% faster overall than stock reference designs?!?!

Cons: The best 6850 on the market at middle of the pack prices....don't hestitate to buy this card immediately!

Overall Review: I can't even imagine what this model will do crossfired and OC'ed.... This is the best price to performance value of all DX11 capable cards on the planet. Read up on this thing for yourself if you don't believe me!

Cons: its looks good and is not loud...

Pros: Theres a ''Silent/Performance'' switch under the heatpipes

Cons: Need to reboot to apply the change.

Overall Review: Look under the heatpipes on the pcb theres a small switch to select the fan speed on the cooler.

Pros: This card was part of my first build and I'm very happy with the performance. Very quiet card to me. My case sits about two feet away from the monitor and I can only slightly hear the fan when playing games at night. During the day I can't hear it at all. Good frame rates (70+) on every game I've played so far with 1680x1050 resolution and very high settings. Games played with this card: Portal 2, Dirt 3, Mafia 2, Bulletstorm, Mass Effect 2, Dragon Age 2, Metro 2033 and Sims 3 (for the wife). I don't think I'll need to upgrade for a long time but when I do will probably try crossfire with another R6850.

Cons: Heat sink is about an inch wider than the PCB which can be seen in the pictures above. This was not a problem in my case but may be for others.

Overall Review: I have had this card since January of 2011 and I have not had an issue with it once. Not even any minor flickers or anything. This card has performed at top notch and I saw everything I could have expected from it.

Pros: Crossfire's well. Overclocks easily to 1ghz with updated drivers and overclocking makes a huge difference in real world gaming performance for me. Afterburner works well and can be set to start up with windows and always be OCd if you want. First one has given me no trouble after a year and a half. Second one died after 3 weeks. Almost never micro stutters with crossfire and looks cool. Overclocks to 1ghz with no voltage increase but my settings for stable 1ghz gaming is 1220cv 1000Mhz, and 1130mem. By itself one of these cards plays skyrim and crysis 2 at max res/max settings but frame rate on those is low until its overclocked. With two cards this card will play BF3 Metro ect on max no problem. Reviews I have seen of the 69xx suggest those cards do not perform as well as this card has for me for games .

Cons: Purchased a second one for crossfire and put my new card as primary and aparantly it couldnt take it. RMA in progress with MSI and it has been almost a month and they are now shipping it :( If you can go through NewEgg for RMA do that since they took about a week last time I did one with them.