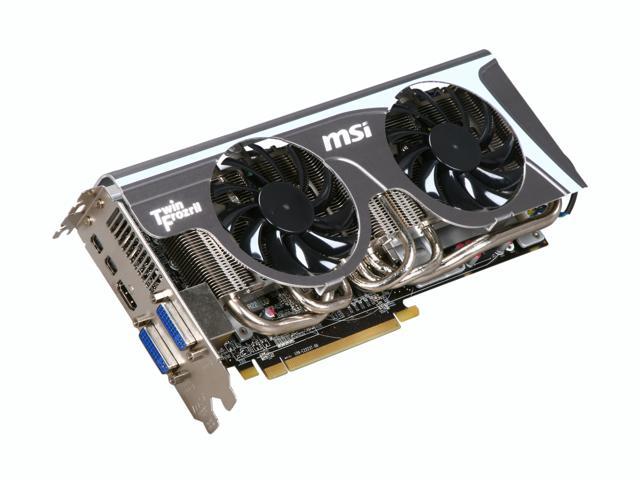 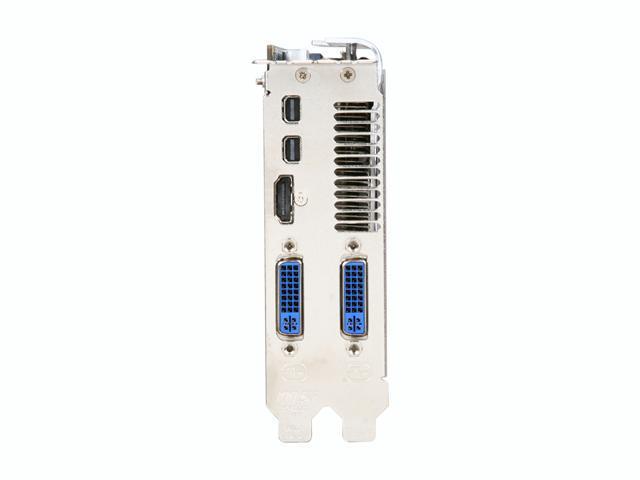 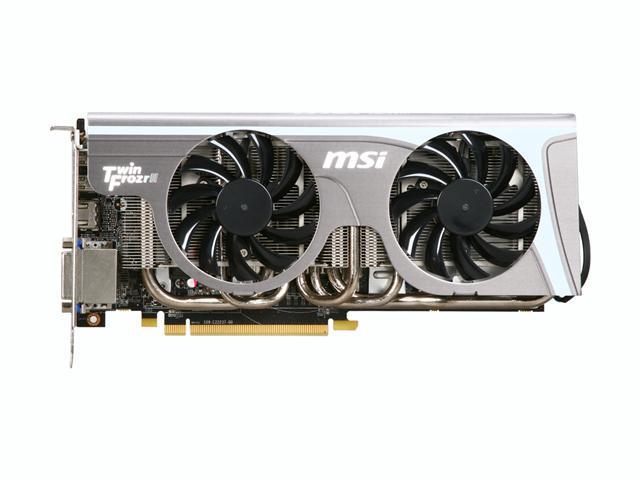 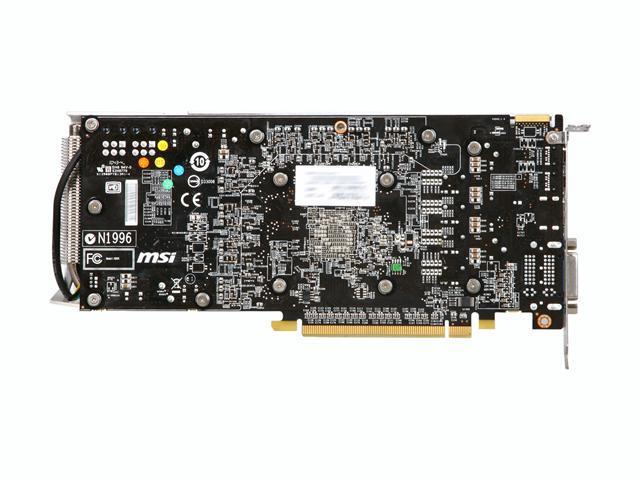 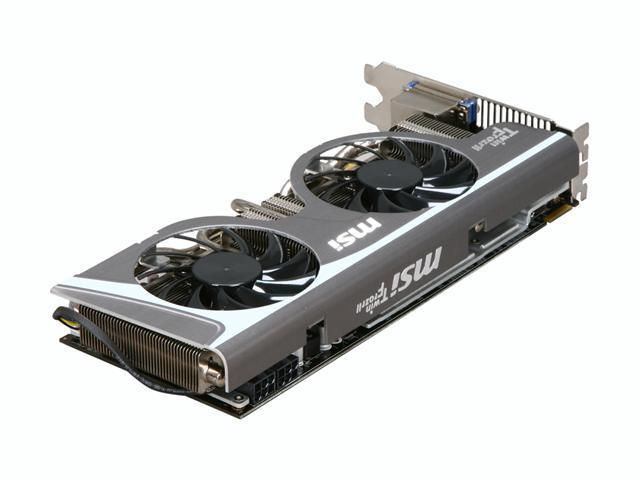 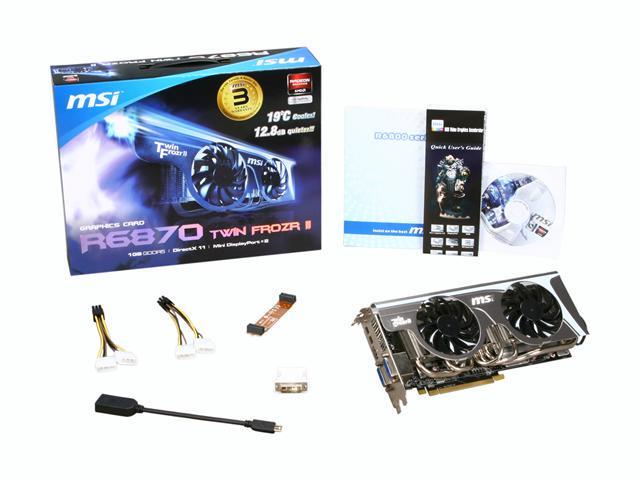 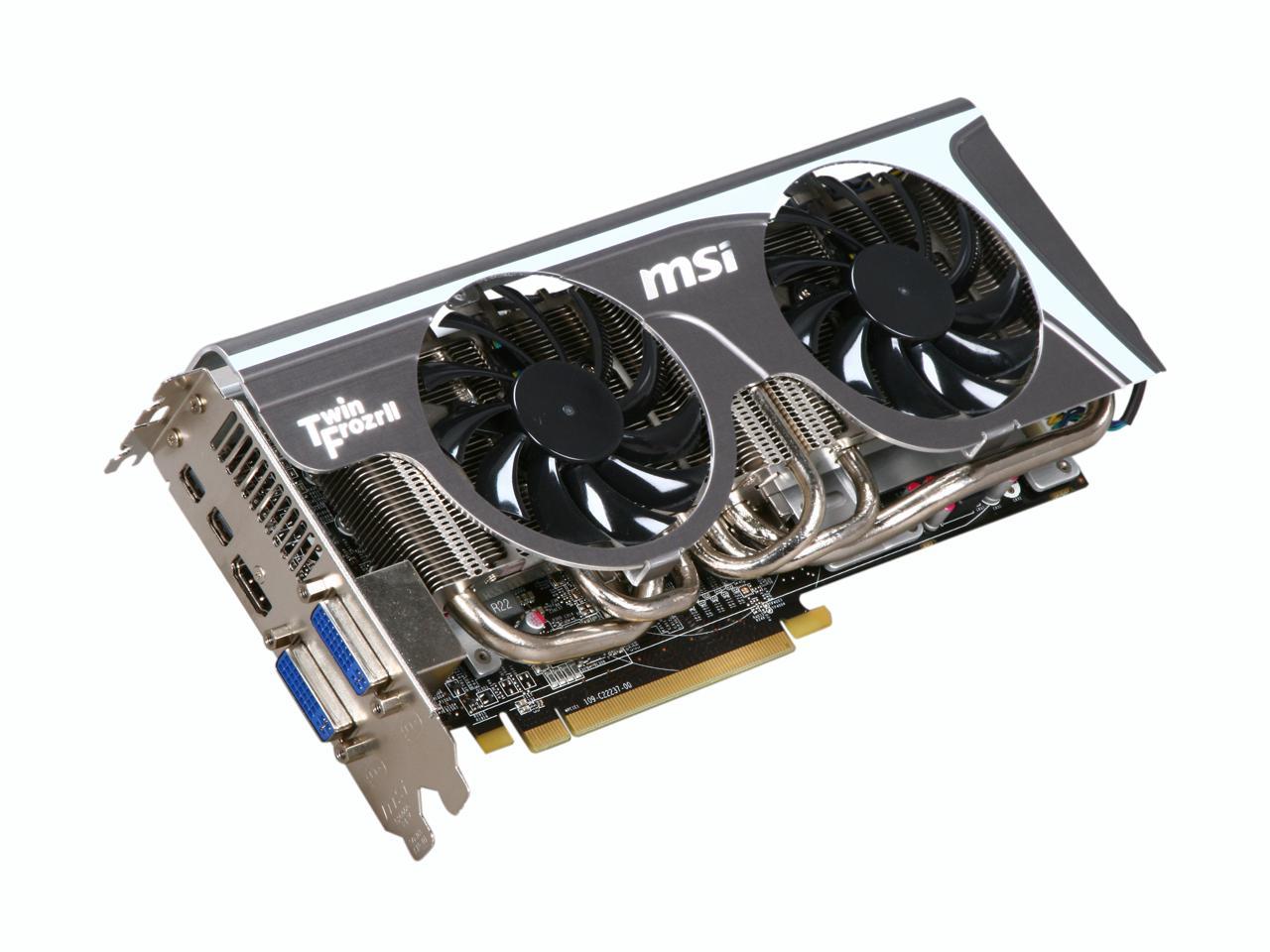 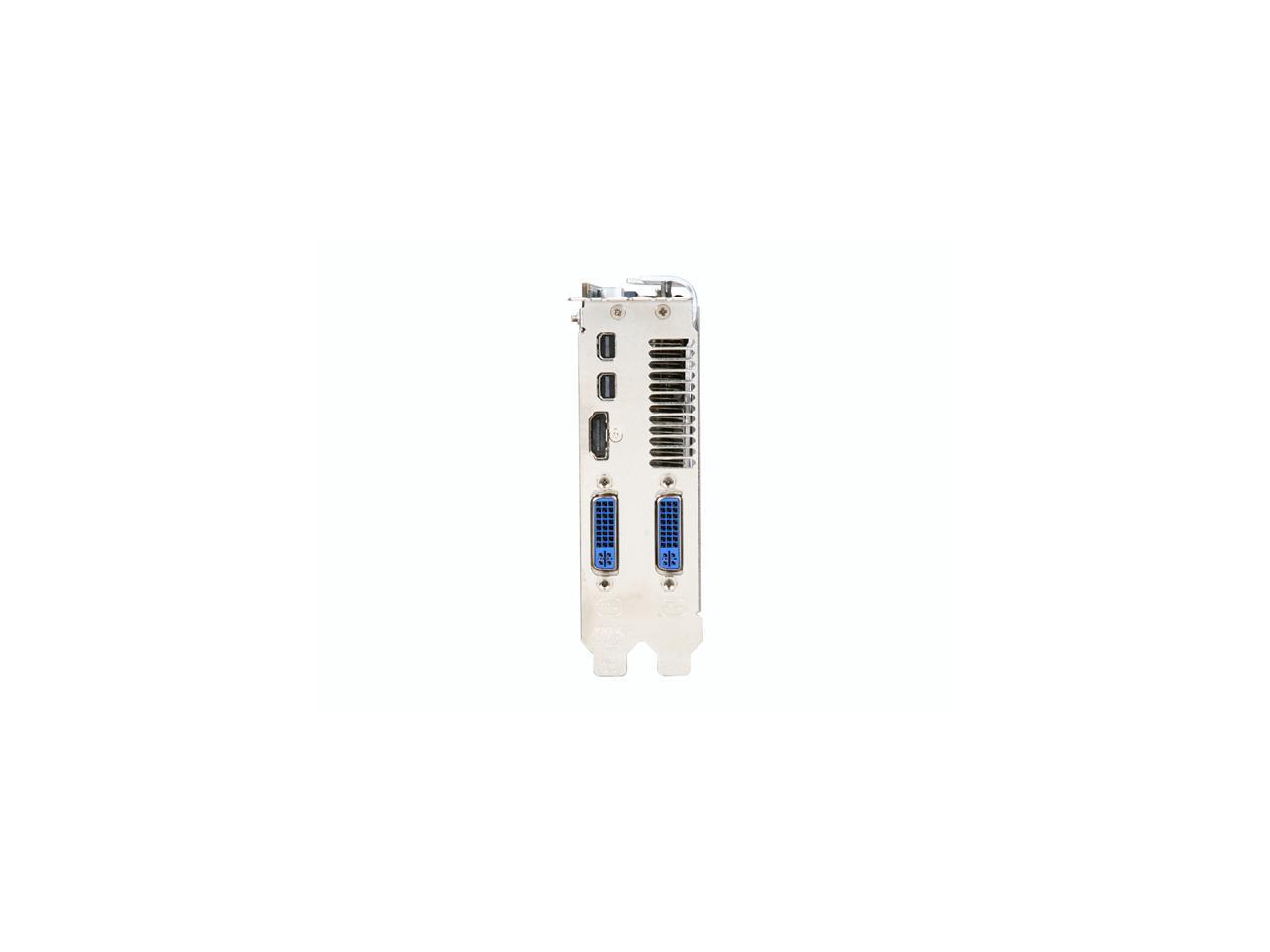 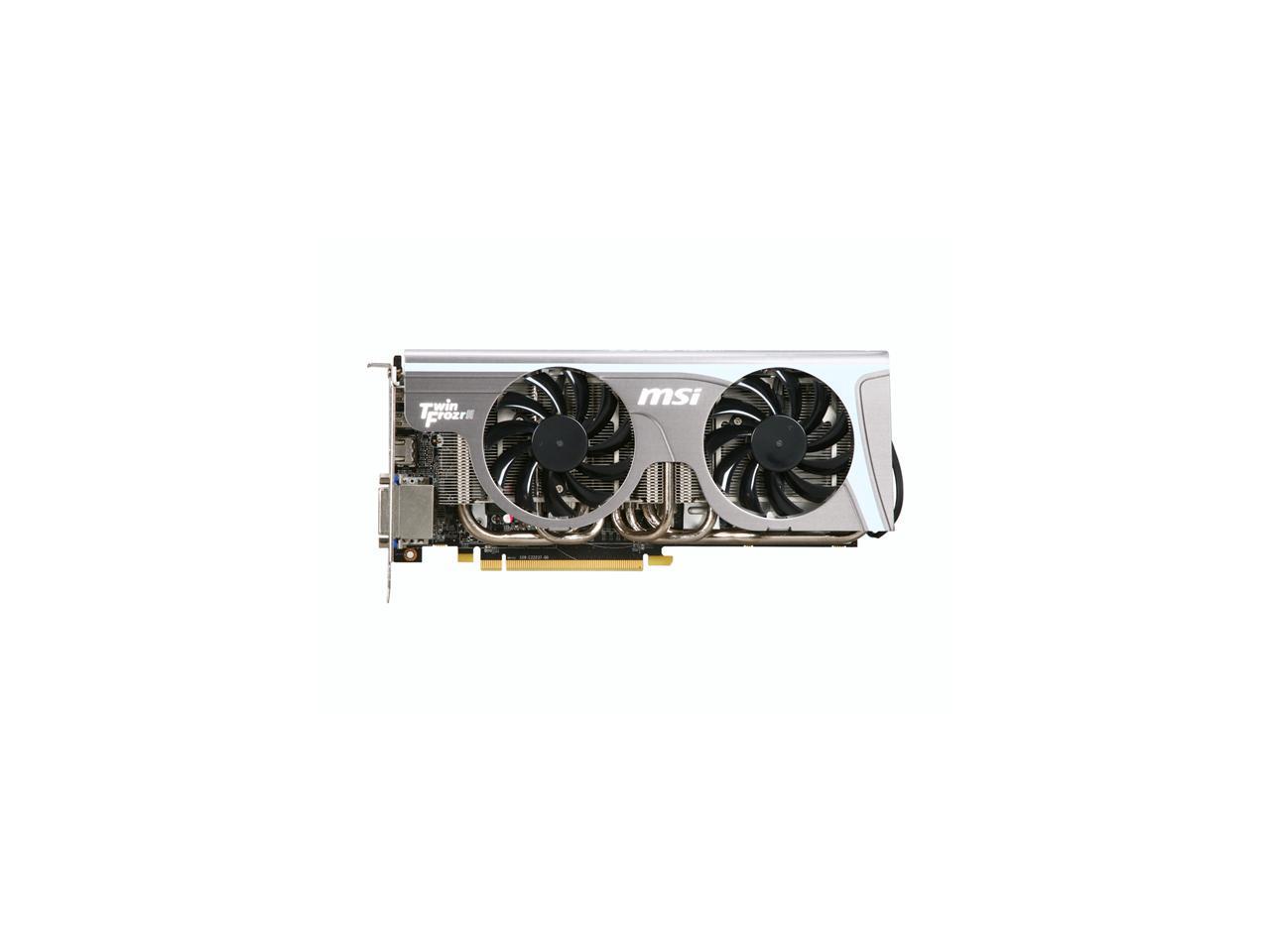 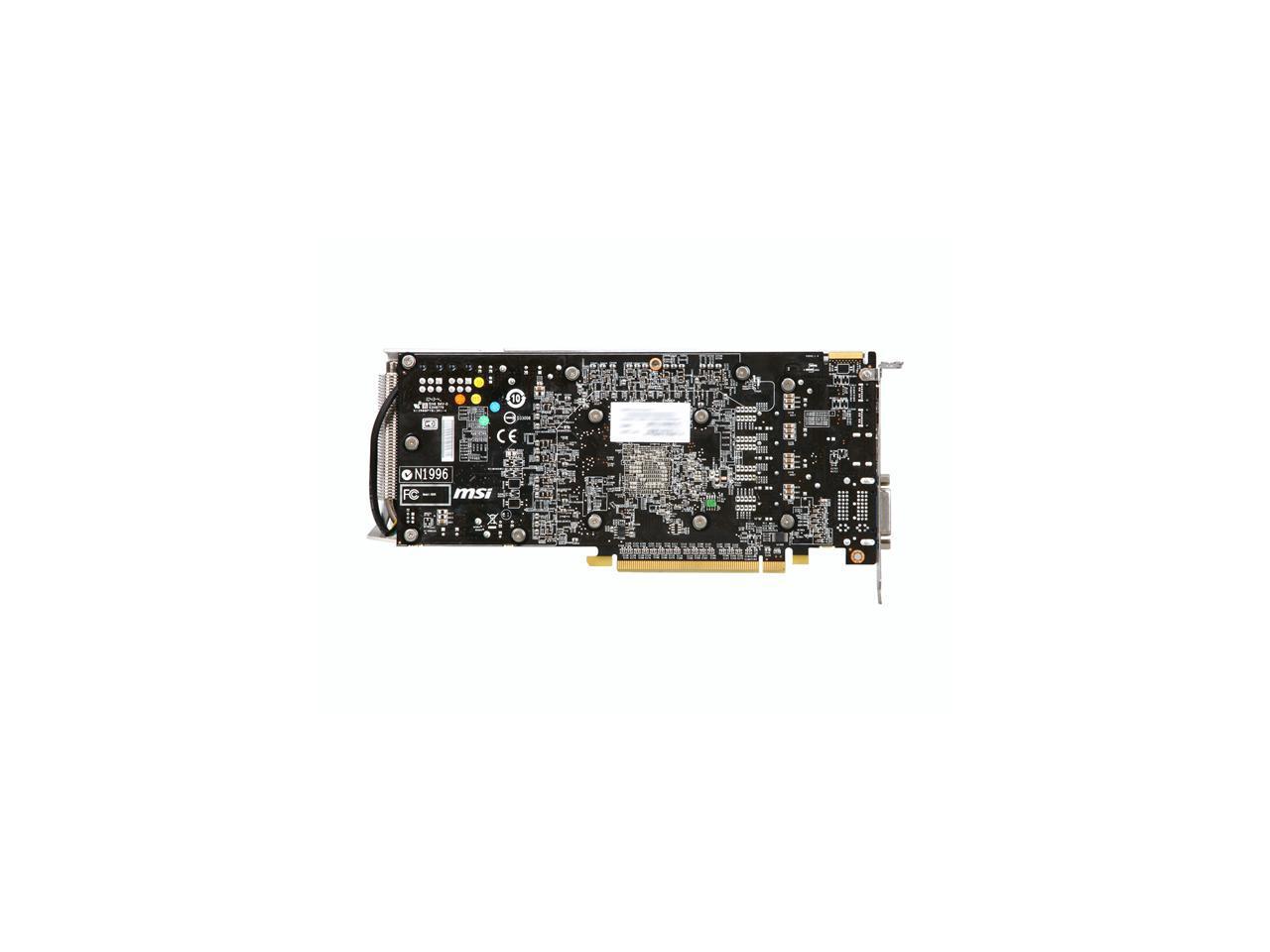 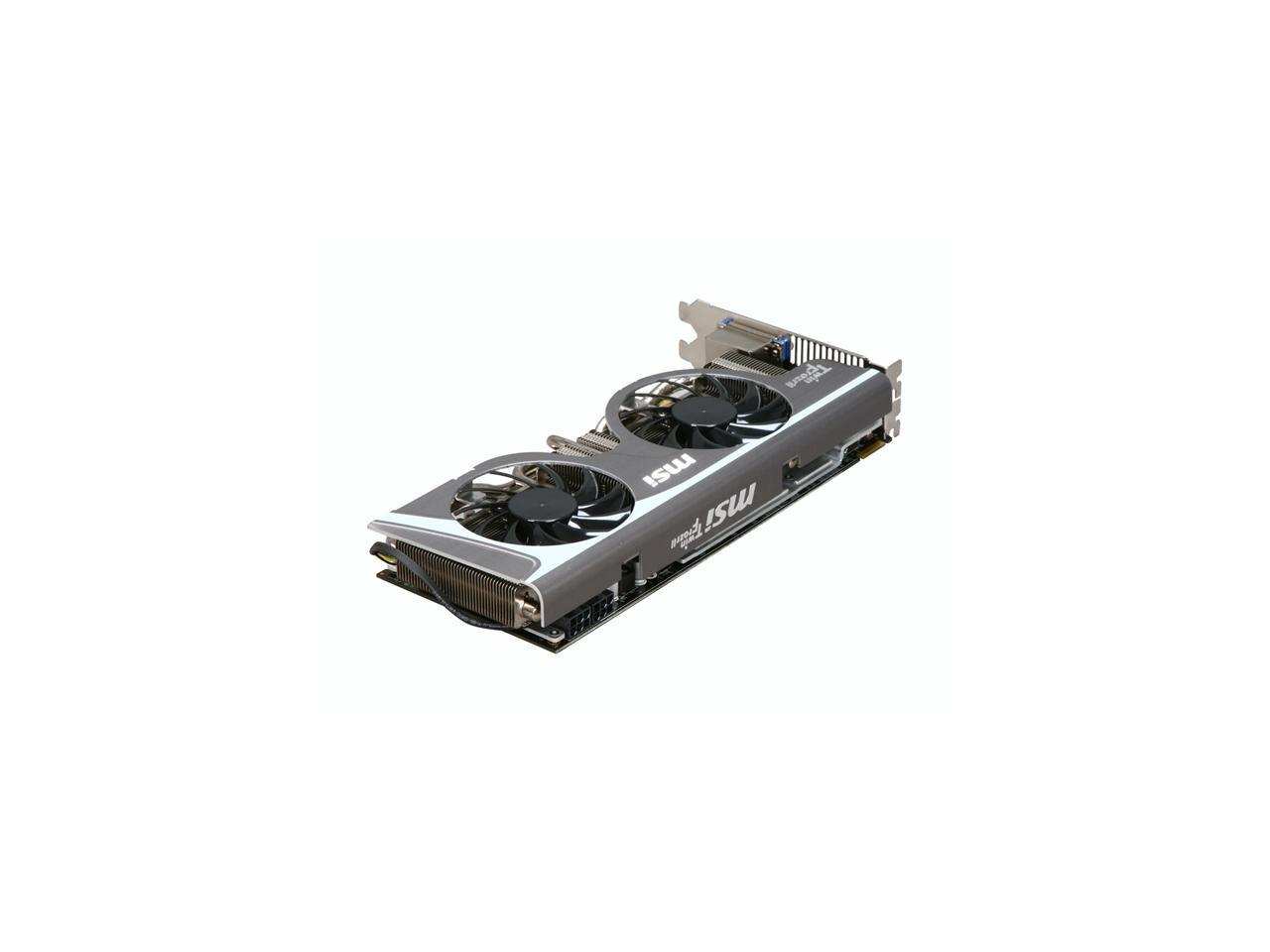 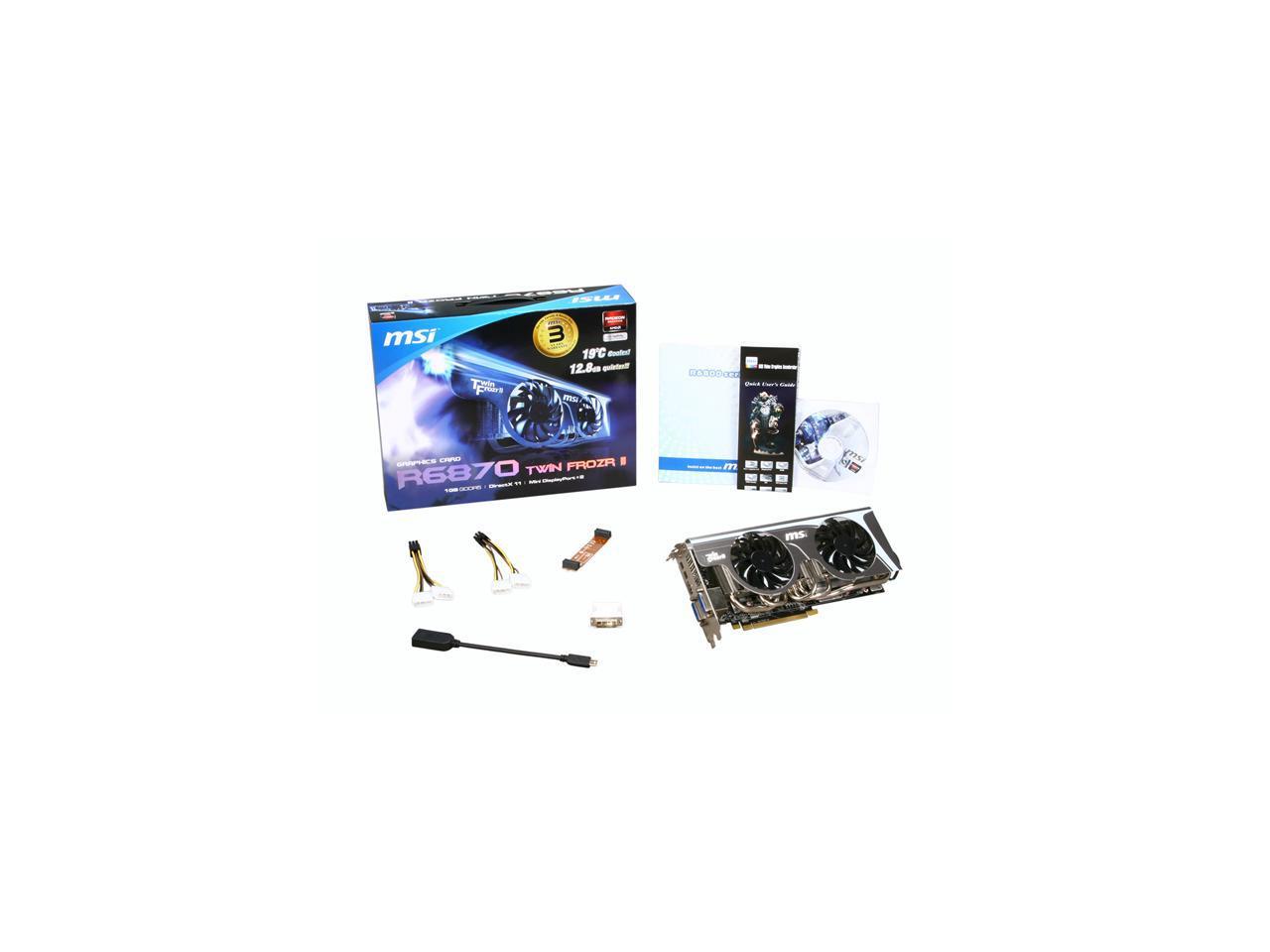 Pros: MSI Twin Frozr II cards are great for overclocking. I've got mine at 1000Mhz core / 1175Mhz memory. That's 32.0 Gpixels with 150.6 Bandwidth very stable. 100FPS Kombustor benchmark for 1900x1200 resolution 4XAA ON and get and get 76FPS stability score in Direct 3d 11. Playing Blu-ray like eye candy. Fan is very quite no matter how hard I run this during game play. Playing Crysis Gamer mode full screen 1900X1280 blood on, weapon inertia maxed aa:off and the card never goes above 65C with fans up to 60%. Lower power consumption and greater efficiency than mid-level cards it competes with.

Cons: Other than having to set Afterburner to match the "user defined" fan settings to that of MSI's website - NONE.

Overall Review: The MSI AMD 6870 video card OC at 950Mhz/1050Mhz comes very close to Nvidia heavily OC MSI GTX 460 Hawk Talon Attack running at 1000Mhz/1000Mhz as a single card solution. In crossfire vs SLI it surpasses it in all benchmarks online. Check out reviews on Legit Reviews, AnaandTech, and KitGuru. AMD crossfires better than Nvidia SLI's getting better gains on their second card it competes with and is a known fact. So if your going to crossfire two of these babies you've got the specs of one GTX 580 under the hood at a lower price and lower power consumption with less heat dispersing under the hood. I ordered this card and got the boxed OC version! Thank you NewEgg.

Pros: I absolutely love this card. I ran one of these for a month or so until i could get the second one, and even with one i maxed out pretty much anything except metro 2033 and got 45-60 fps. Running in crossfire, i get absurd framerates. I run Bf3 at around 90 fps, i run skyrim at a steady 60 fps, not because that is all the card is capable of, but because i cant turn vsync off in that game. i even run metro 2033 at 60+ fps, seeing only occasional dips to the 40's. the overclocking ability offered by these cards is equally awesome. i run both cards at 1000 MHz and they never break 50 C. And its not even loud. This card has turned me into a lifelong MSI customer

Cons: at first had some issues with crossfire drivers, but i just reinstalled my drivers and was fine. not really a con, but all i could think to put in this section

Overall Review: This is the best iteration of the 6870 on the market right now. i could not give this product a more glowing reccomendation.

Pros: Quality built solid state military grade capacitors with awesome cooling going on. My AMD 6870 reference card would max at 920Mhz core 1150Mhz 71C temp at high usage or would freeze if I went a sliver higher. The MSI AMD 6870 Twin Frozr II card tweaked a bit more to 940Mhz 1250Mhz without any problems and runs at a cool 59C with maxed settings on Crysis and WOW. NewEgg sent me the OC version instead to boot....WTG NewEgg! Pleasant surprise. Two of these cards crossfireX will match one Nvidia GTX 580 and puts out less heat and demands less wattage running both and the MSI Twin Frozr II version even more so it's built so well.

Cons: Need to define the user fan settings yourself or wind up with video tears playing games. The 10.12 drivers work but dosen't adjust the auto fan ratio to heat dissapation. The AMD CCC actually is right in line with Afterburner in stats. This card will last longer than I'd like before wanting to replace it with a more current up to date GPU. LOL.

Overall Review: I wish there was an area on MSI.com that explains in detail on what settings to set your manul fan speeds for temps or an additional driver that would get thier fans in auto sync. Would be nice to also include an overclockers guide to settings so the less savvy overclocker can use to unlock more potential on thier cards at safe recommendations other than stock.

Pros: Powerful and quiet. SURPRISE FACTORY OVERCLOCKED! Newegg's stats say the default core clock is 900MHz, but when I installed the card the default is listed as 920MHz! The size is just right. It's slightly longer than my previous MSI 4850, but small compared to many other over-sized beasts out there. Got it for a great price ($269) on Black Friday because the standard version of the MSI 6870 was out of stock that day.

Cons: At time of purchase, AMD says that the current 10.11 drivers do not support the 6800 line. We are to instead use 10.10e hotfix until 10.12 is out. No big deal I suppose, it's probably mostly Crossfire support anyway. MSI underestimated the power of their cooler. The fan doesn't seem to go over 30% speed and the card gets into the upper 60C range. If the fanspeed curve was a little more aggressive - say, 50-60% - the temps would get even lower and the card still barely makes a sound.

Overall Review: This is the first time I have ever seen a video card automatically underclock itself when not in use. It drops to 100/150 for core and ram respectively. When you enter a game it kicks right up to 920/1050. Very interesting, should allow the card to live a long healthy life.

Pros: Great card, got two of these in crossfire. Easily overclocked to 1000MHtz with a lil xtra voltage. Cards run very cool for how little ventilation room they have in crossfire. Cards rarely ever breaks 60C under full load and 30C ambient.

Cons: Have not found anything as of yet.

Overall Review: If you are having drver resets or black screens your voltage is probably too low for your clock speed. I needed about 1.2 to be stable at 1000MHtz.

Cons: -Not a 69XX card -when I originally tried to set up an RMA, the MSI website did not recognize my S/N for my card.... Shouldn't that be recorded when it leaves the factory?? -AMD drivers are terrible at the moment.. -Having to let my card overheat the first few times because of the fan problem

Overall Review: I was originally going to give this a bad review because I thought that this thing was defective at first (it was getting up to 90C @ 21C ambient and was showing artifacts when I played SCII), but I started playing around with the settings for afterburner and found that to make the fans go any higher than like 20%, you have to create your own "user defined" cooling curve (My curve kinda looks like a tangent curve - but I'm not a graphics cooling expert, so go make your own if you know how to). If you don't do this, your gpu will overheat and You'll wonder why your fans aren't blowing any air... System Specs: Intel Core i7 870 oc'd@ 3.5GHz, 8GB DDR3 Mushkin Blackline 1600 @ Cas 9, Asus Maximus III Gene Mobo, Corsair H50, NZXT Vulcan, 1x MSI R6870 Twin Frozr II, Seasonic X750 PSU

Pros: I think I just gizzed in my pants. These cards are beautiful. Crysis 2, max settings, INCREDIBLE. Upgraded from a single 4890, the specs aren't much beefier, but there is definitely a decent performance jump. This is my first MSI card, I usually buy XFX but i am pleasantly surprised with the quality of the cards. The selling point for me was the cooling setup. Twin Frozr works as advertised. My case has very adequate cooling, my cards idle at 36C and I havent seen them go above 60C under load. I have noticed that when under load, the fans speed stays at 45% ish...? So this setup could run even cooler if you program the fans on temperature chart, in the included Afterburner utility. The afterburner utility ROCKS btw. But at 45% speed, the fans are almost silent, if i turn off my case fans, i can barely hear the gpu fans.

Cons: HEAVY. But thats completely understandable, due to the design and size of the heatsink. My computer definitely gained a couple pounds with 2 of the cards :P A little troubling to me because I attend LAN parties frequently, but its not overwhelming or a reason to not buy these cards.

Pros: Basically plug and play. Windows 7 found and loaded basic drivers to get the card up and running. AMD overdrive utility included is cool and the card really shines with the proper drivers from the MSI disk. Can run (for example) Starcraft II on extreme settings and still does 50-60 fps and runs cool and quiet (Still playing the the OC settings). Excellent and fast shipping

Cons: The Dirt3 promo it came with has been a headache to aquire. I logged in to the AMD site and filled out the info and then was prompted to visually verfiy my promo card and more info. To this date I haven't recieved the proper game code required to download the game from Steam. Also this card is supposed to have a $20 MIR and didnt receive a rebate card or any info to aquire it to send it in. Left an egg off because of these ongoing issues.