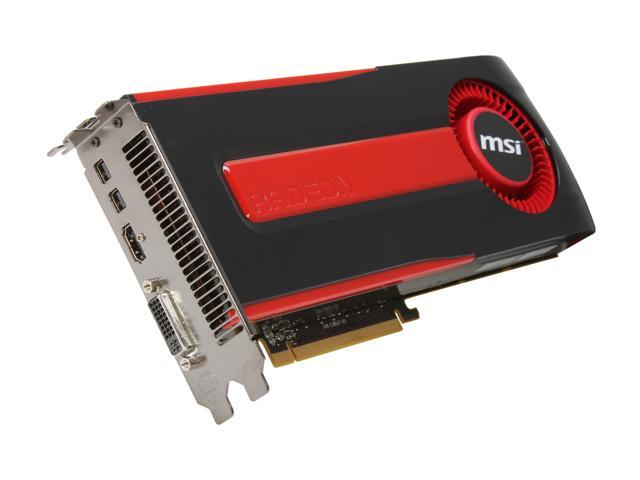 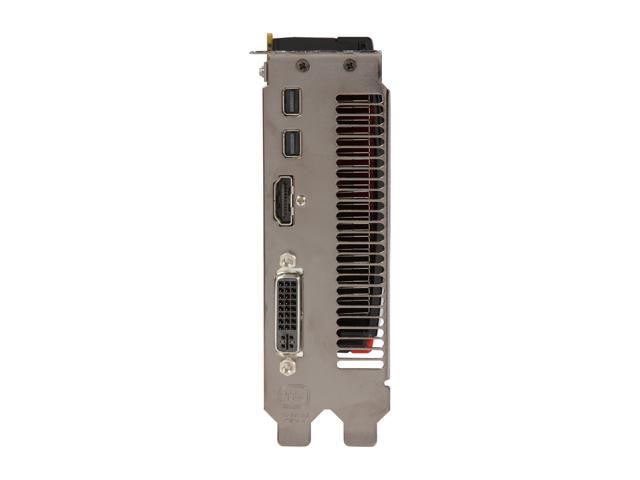 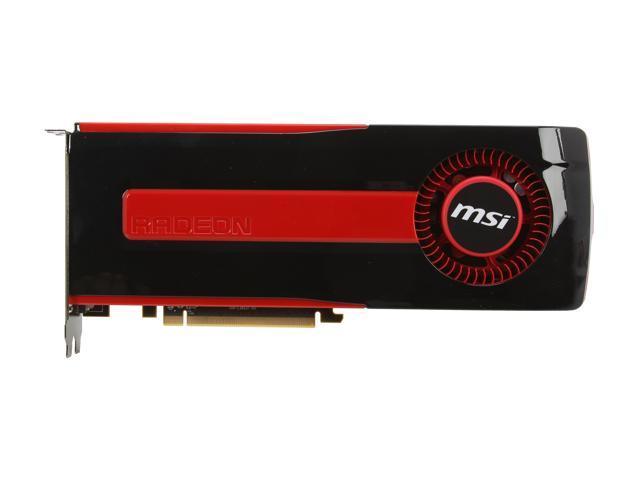 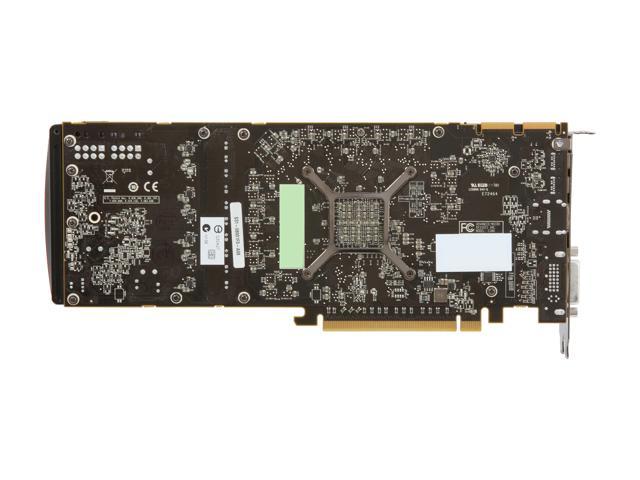 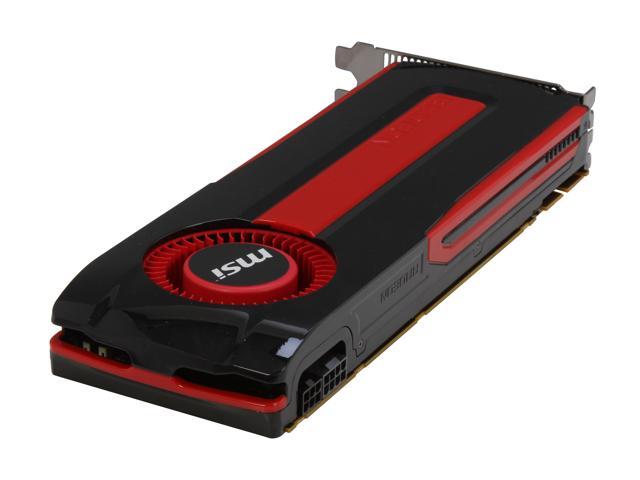 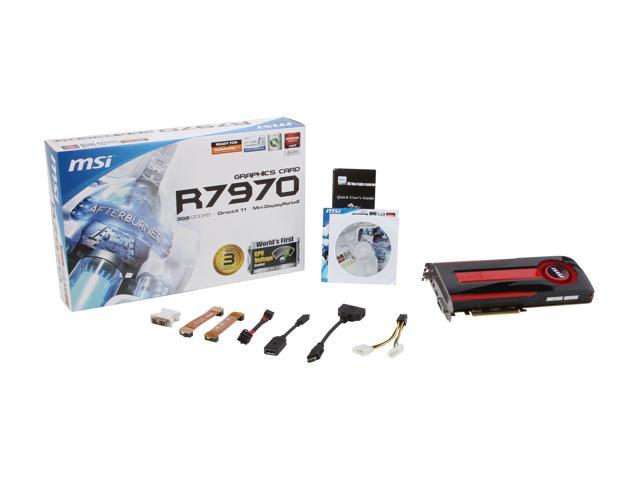 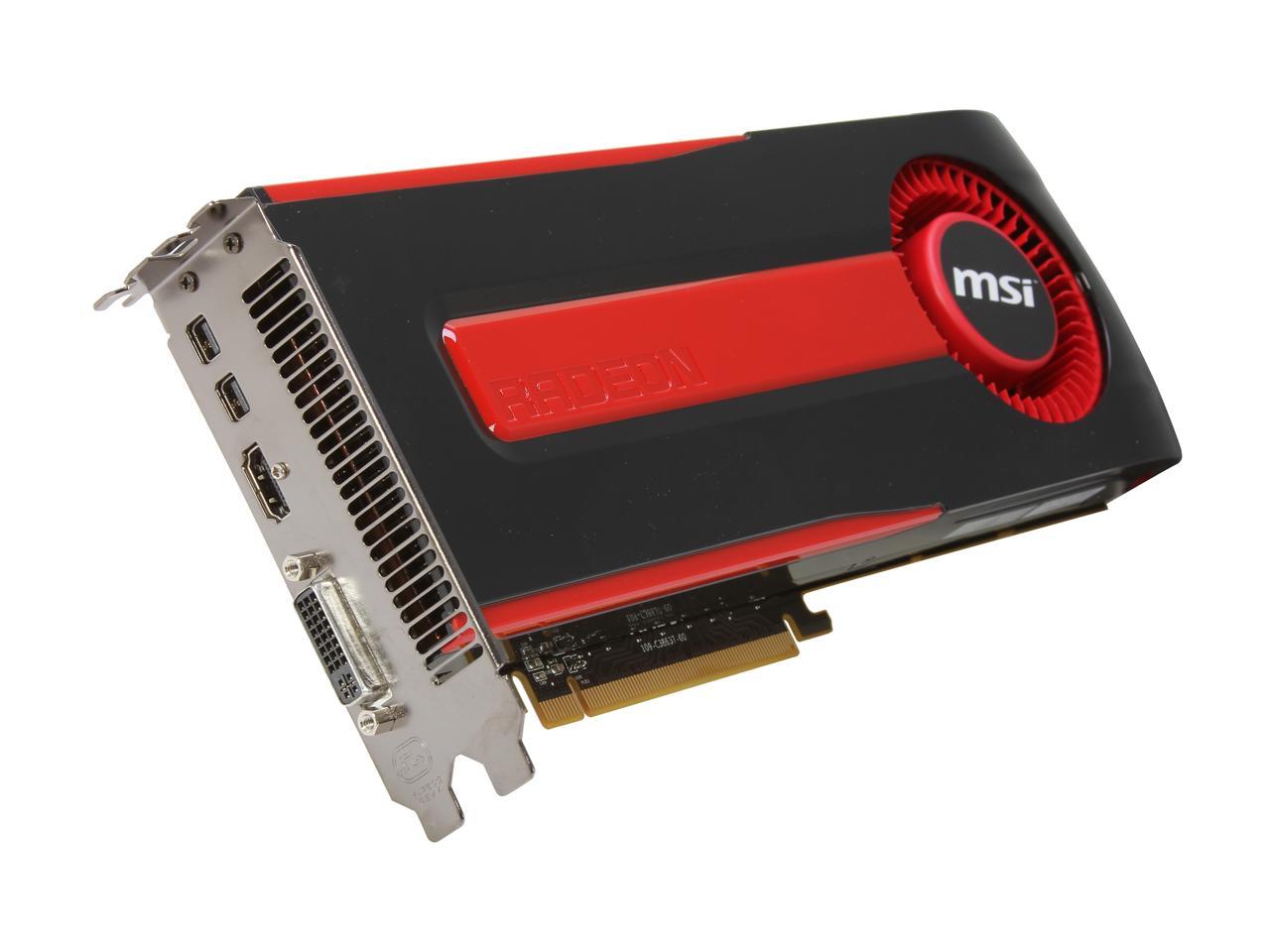 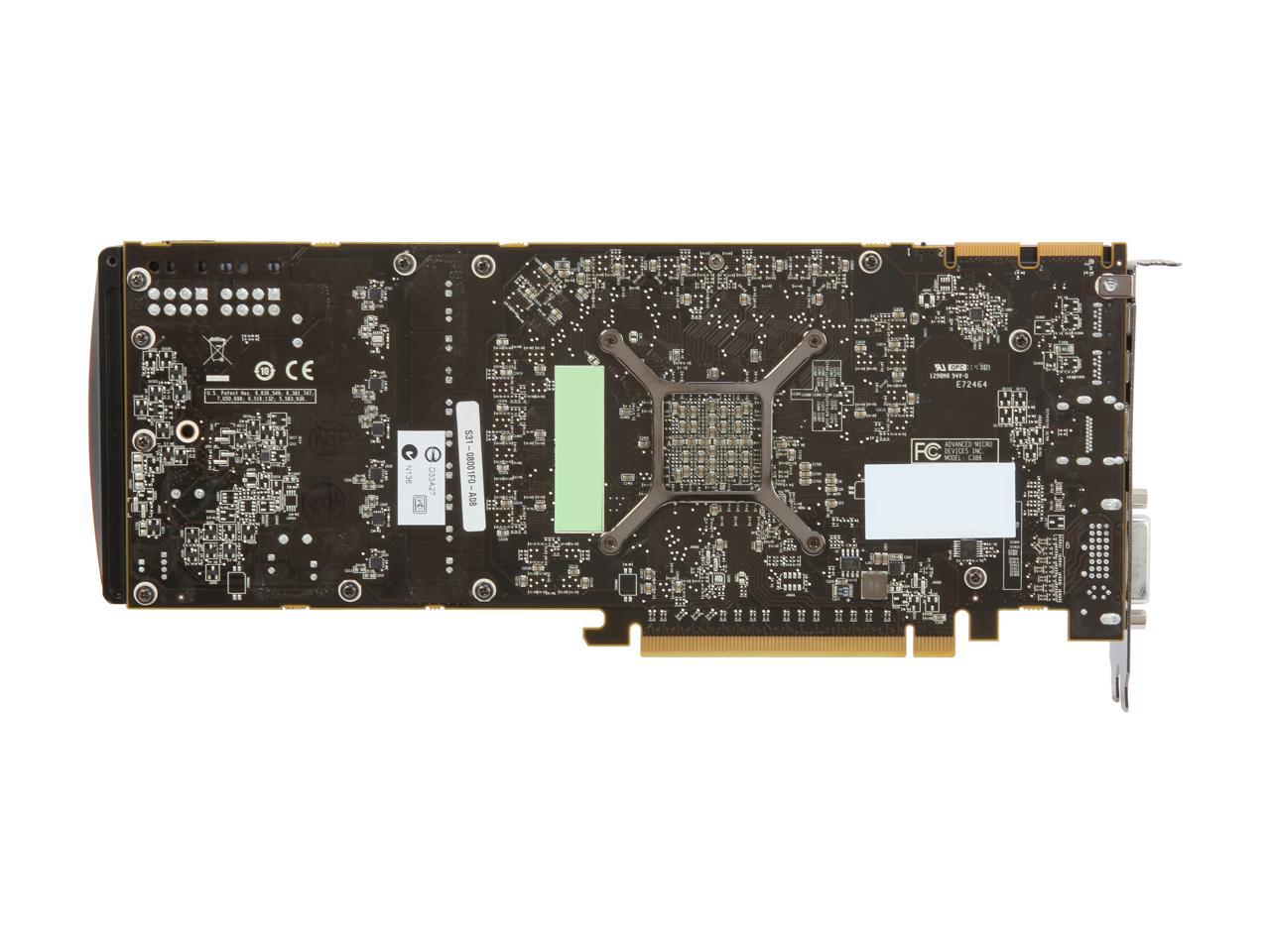 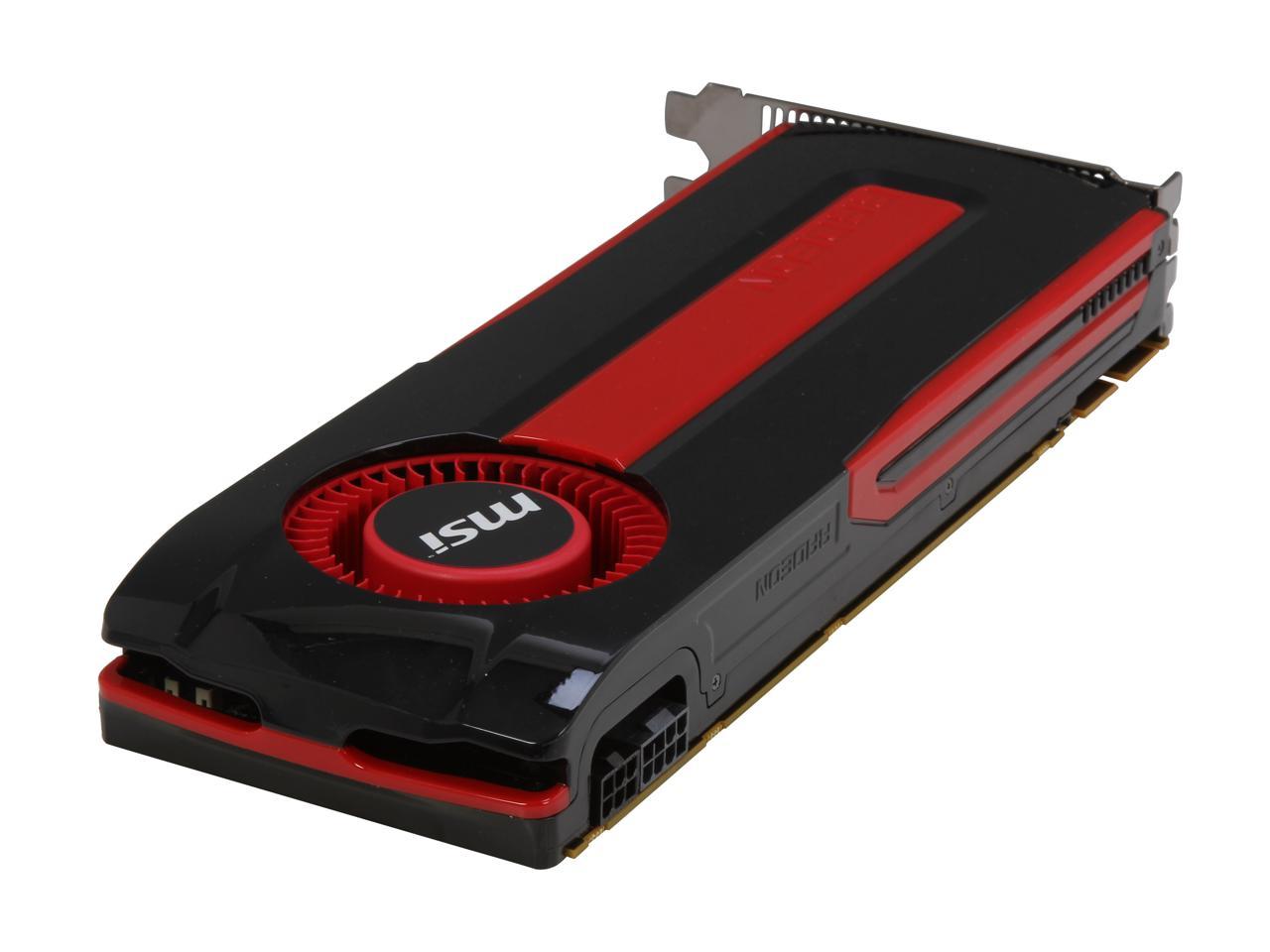 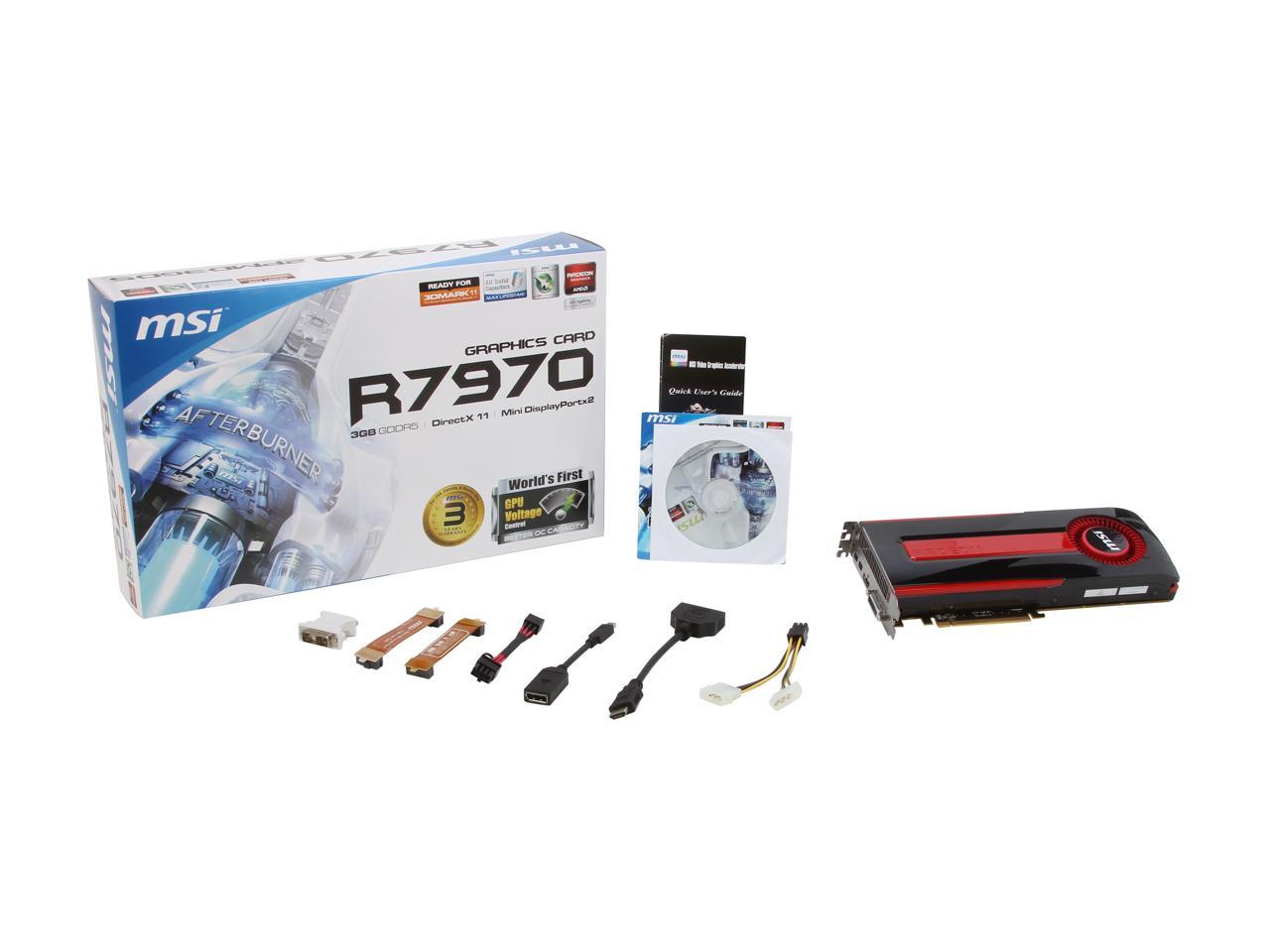 Leading international graphics card maker MSI has always been a key player in the competitive graphics card market. Thanks to its strong R&D capabilities and outstanding product performance, MSI's products have always received high acclaim by the media and consumers throughout the world.

Pros: Big upgrade over a 5850. Runs Skyrim, Battlefield 3, Crysis 2 DX11, Witcher 2 (ubersampling mode off) with ease. Overclocks easily, I got it stable at 1090 core, 1550 memory with normal/low fan speeds (Crysis Warhead maxed out and Witcher 2 in Ubersampling mode are good for stability tests).

Cons: Price, not all cards will overclock past 1125 core/1575 memory. Can overclock higher if willing to put up with fan noise above 60% (sounds like jet engine above 55%).

Pros: The MSI 7970 is the first to feature 28 nm, along with many other features that set it ahead of the previous line of high end GPU's. The 28nm die allows for great overclocking, while maintaining a low heat output. The fans on the HD 7970 have been improved over the HD 5800 and HD 6900 series. They are bigger and allow for a lower DB while maintaining higher CFM. The crossfire scaling is great, and provides nearly perfect scaling in current titles. Idle temps are 45c (Top Card) 35c (Bottom Card). Load temps never hit 65c with fans set to 55-60% even when overclocked. These cards are housed in a Antec 1200.

Cons: In the past week since I received my 7970's, I have had very little problems when working with them. Drivers are going to get better, and the performance we are seeing now is already great! Once AMD releases an official Crossfire driver, we are really going to see the hidden potential !

Pros: It's fast - With very few exceptions, I just crank the image quality sliders to their maximum and forget about it. It's cool running - With my old card, I was used to idle temps in the mid 70s, topping out at 90 or so under full load. When we had unexpectedly hot weather recently and the room got to 80-83F before we turned on the A/C, I saw the card temps top out at 76C under load - about 1C hotter than the old card (8800GTX) would IDLE at. Amazing. For what it does, it consumes comparatively little power - It's not a total miser, but it still uses less power across the board than the old card, watching the power consumption widget on my UPS. Considering the performance difference, that's impressive.

Cons: It's all the things in the Pros column - when it's not crashing. I run dual 24" LCDs, one on DVI, one on HDMI. At random intervals - sometimes days apart, other times every 15-30 minutes - my desktop freezes, I lose picture, and the system crashes with a BSOD reporting STOP error 0x116 on atikmpag.sys. Beta drivers, release drivers, CPU running overclocked or at default clocks, driver cleaning utilities used before reinstalls, it doesn't matter. The video driver. Will. Crash. Somehow I had escaped it doing so while in the middle of work, until today. After wasting a few hours trying to render a few video projects (non-GPU assisted, I might add) only to have the STOP 0x116 rear its head at different times in the middle of the render, I decided I had what I needed to write this review. And it wasn't going to be pretty. If I knew I could get a full refund for this card, I would turn it in for a Kepler in a heartbeat. It's that frustrating.

Overall Review: I don't blame MSI for the problems, as I've seen other reports of the same error across different ATI GPUs and different vendors. It seems to be a bug related to running multiple monitors, so if you have a single screen your mileage may vary. I liked the attention to detail in the way the card was packed in an anti-static bag inside a form-fitting foam block, vs. just the bag in the box, as I've seen on other cards. If this is a driver issue (and right now I believe it is), I'm not holding my breath for AMD to address the issue in an update. It's a great card when it stays stable, but I'm rapidly losing my patience dealing with STOP 0x116 as it's currently happening several times a day. Approach with caution.

3 out of 3 people found this review helpful. Did you?
Manufacturer Response:
Dear Valued MSI Customer, We would like to apologize for the issue you have experienced with this particular VGA. Please email me directly via USUserSupport@msi.com your VGA's serial number and your complete contact information, subject heading "EAHR7970". I would like to help you get this resolved. Best Regards, User Support MSI Product Support
B B.
Ownership: 1 month to 1 year
Verified Owner
MSI R79701/16/2013 11:12:54 AM

Pros: Well constructed, looks good. Great FPS in many games. I have two in CrossFire with 80-120 in most parts of Skyrim, BF3, Far Cry 3. Also using them with World Community Grid and it goes through work units at an impressive rate. Runs fairly cool, fans don't need to be turned up very high, and noise is reasonable, even quiet depending on fan settings.

Cons: No cons with MSI's card, so I will not deduct eggs from their product. However I have some issues with AMD's drivers. Some games have serious errors, and a few are just unplayable, until new drivers are released. Even with updated drivers there can still be bugs.

Overall Review: Despite the driver annoyances, I am impressed with this card for its GPGPU power with WCG.

Pros: Beefy card, lots of RAM, looks good actually in Black and Red and I'm not someone who cares about these things.

Cons: Monitor flickering, every time I restarted the computer it came up with flickering sections all over the place. Interestingly after this if I power cycled the monitor the flickering went away. I thought it was power supply related but after trying 2 other power supplies it didn't alleviate the problem. Games mixed bag, some games played great, card is clearly powerful, but Magicka in particular had stuff missing in the starting menus, I couldn't select any of the various challenges.

Overall Review: Going to return this, I've always been reluctant about AMD after previous bad experiences, haven't actually owned a Radeon since a 9700 Pro card (which was a great card actually). Drivers are still an issue for AMD/ATI hardware. My system is a Phenom 955 quad with 8GB of RAM running windows 7 x64 and Ubuntu x64. My old card which is what I wanted to replace is a nVidia 8800 GTS 512 which works flawlessly in this system. This card is now back in and staying for good until I decide to splurge some $ on a new nVidia card. Rather shocking that an AMD card would have issues with an all AMD system.

Pros: Comming from a Asus 5850 I have to say it was worth every penny. Card runs SWTOR and BF3 with out a slowdown. The lack of Display port to dvi was no big deal I have a monitor with HDMI so it was fine.

Cons: Not a Msi problem so no eggs off but the driver for the 7900 cards are bad atm they need a lot of work but its fine for me now.

Overall Review: Happy i got one dont regret the 580 one bit.

Pros: Very high quality card, max overclock with CCC sliders without a voltage increase. Haven't played around with Afterburner yet but I'm sure this card is a monster. Handles everything I've thrown at it maxed with ease @ 1080p. Waiting on my active display port to come in ( see below) to really put this thing to the test. World of Warcraft, Rift, SWTOR, Skyrim, Saints Row the Third, BF3, COD MWF3, Dota 2, League of Legends all maxed at highest possible settings in CCC and in game with 0 issues whatsoever.

Cons: As stated in previous reviews, isn't Eyefinity (3 displays) ready out of the box. In order to use 3 displays you must purchase an ACTIVE display port adapter. Whether it is DVI->Mini Display port or HDMI->Mini Display port it doesn't matter just as long as it is an ACTIVE adapter. They cost about 30 bucks here on the egg so I can't fault MSI for not including this (I don't think any 7970s come with an active adapter).

Overall Review: Very high quality product, comes with a higher price tag but you get what you pay for. I've made many purchases from Newegg in the past and this is only the second product that has been so astounding that I actually took the time to write a review for. The first was my i5 2500k, who doesn't love Sandy Bridge?!

Pros: High Memory, Solid Quality, Great Warranty, High OCs on stock Voltages, Reasonable Cooling(see Other Thoughts). I honestly hold MSI to a higher standard than EVGA, sapphire, Gigabyte. may not have the longest warranty but they will honor their product till the last hour.

Cons: MSI makes fantastic graphics cards, so i dont hold them to the weak points on this particular card. Software support(on this being AMD's flagship GPU) is utterly disappointing. Crossfire requires you to tweak profiles to maintain reasonable temps on the slave card, and even though you get 3gbs of VRAM you will hit the wall on games at 1080p with the high res texture packs. microstutter issues result in random game crashes and red screens while the heating issues will cause your top card to reach 60 c on idle and the stock fan settings will allow it to do so without reving the fan. when the temp sensor finally gets up to bring the temps back down sounds like your taking off in an f16 with the windows down.

Overall Review: i had gone back and fourth to 7970 and 4gb 680 and though they both hold their own, AMD just dosnt seem to have their R and D or their prioritys in order. both offer 3d, but good luck finding a monitor for the AMD side. both have high VRAM, but it seems you can hit the wall real quick with 3gbs and high sample rates. power and cooling goes to nvidia, and in the end, your not going to have to downclock your 680 in SLI to keep the slave card cool. the 7970 CF setup would idle at 61c with all fans installed on my 810 switch.