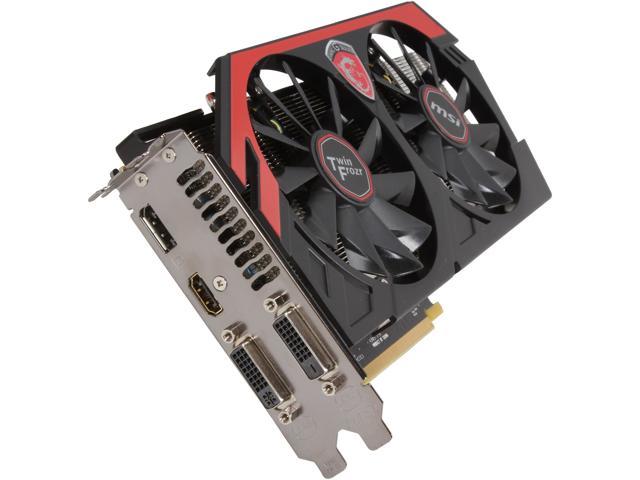 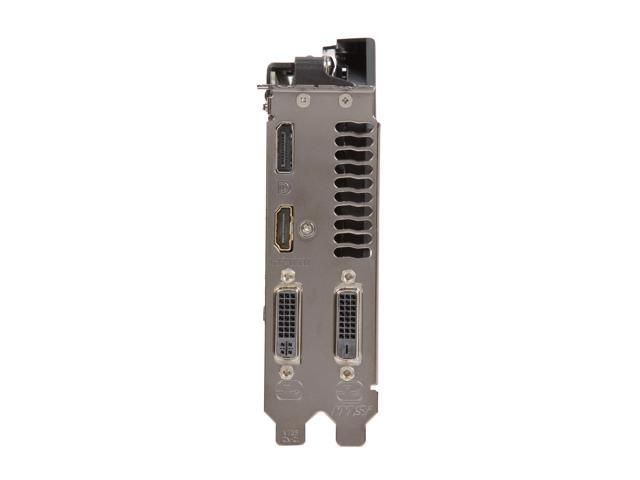 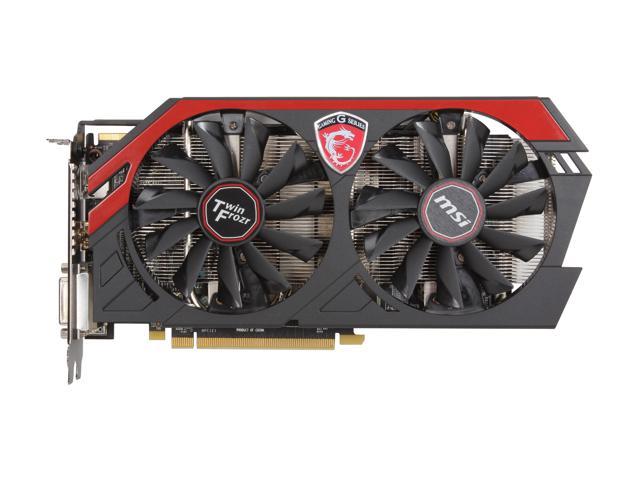 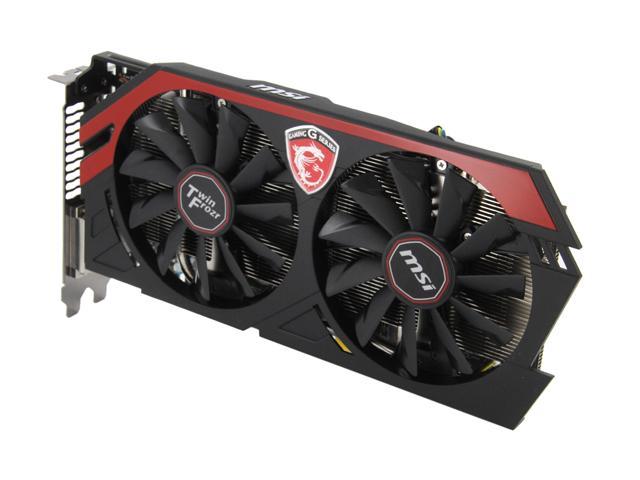 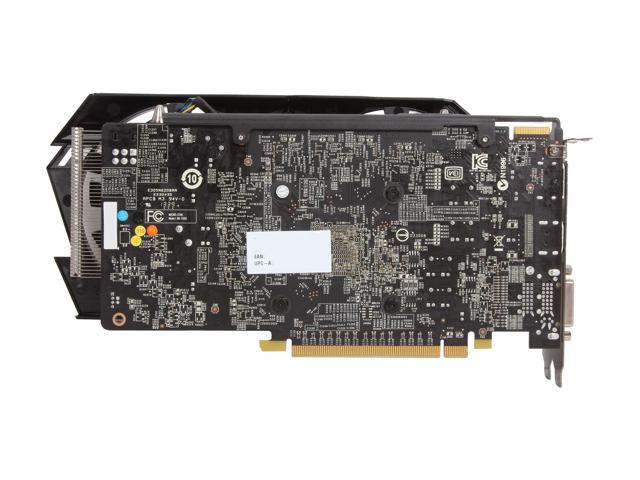 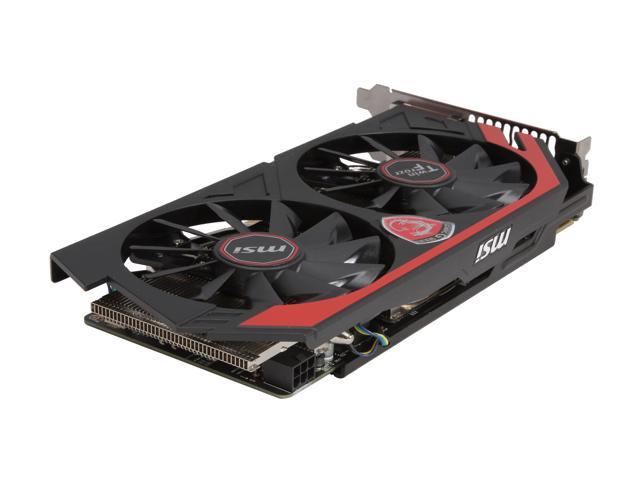 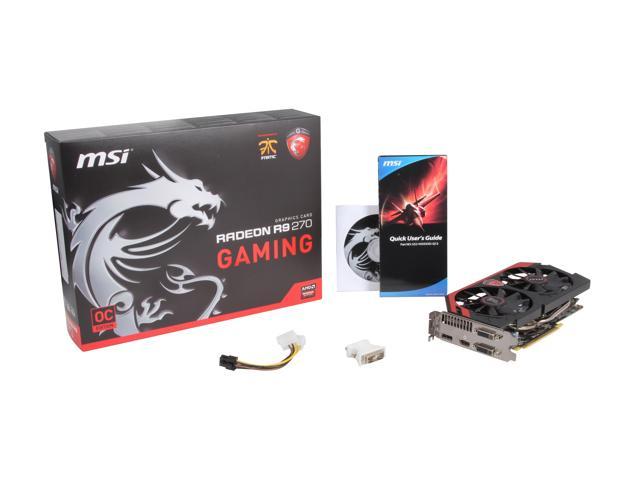 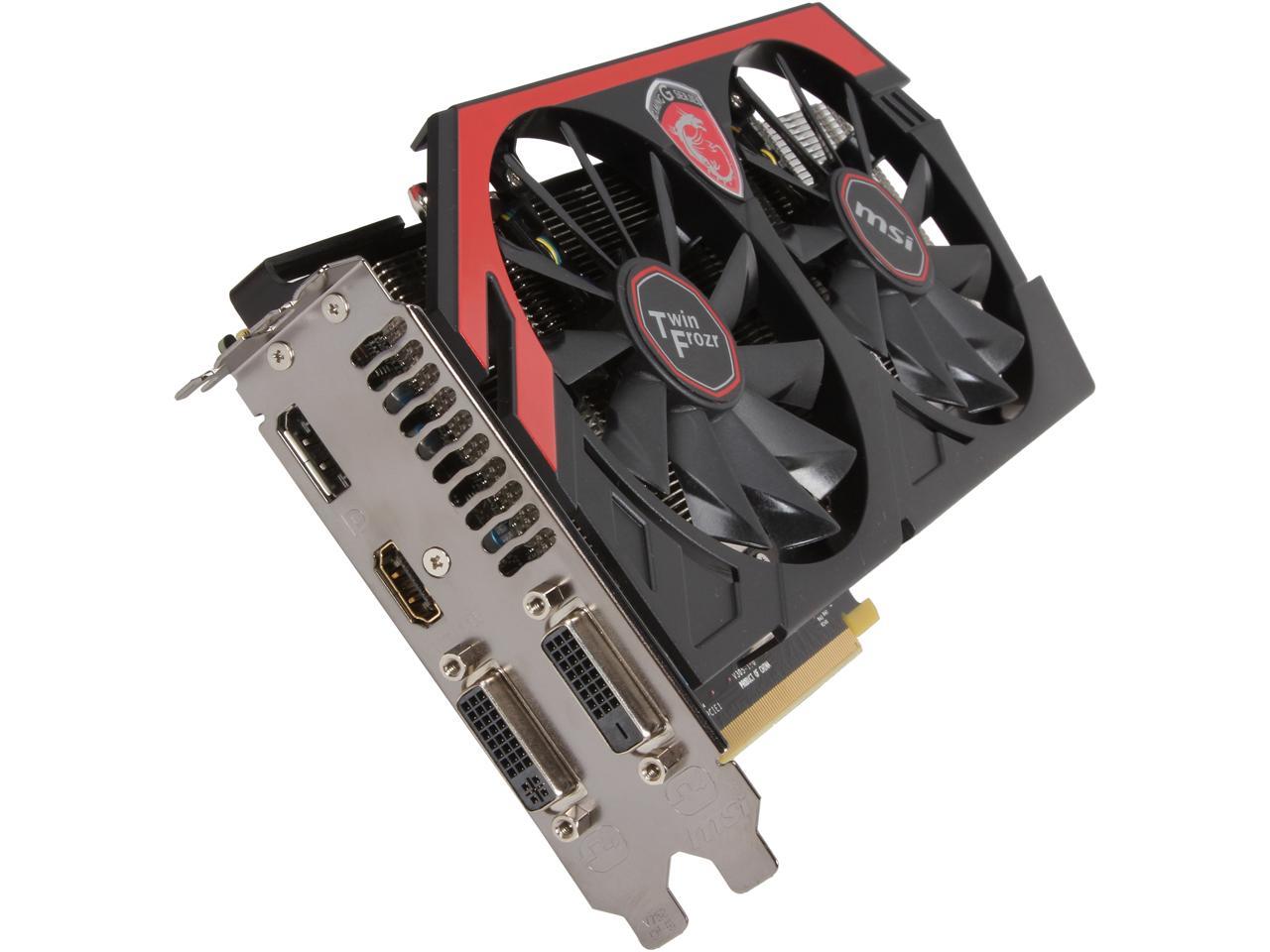 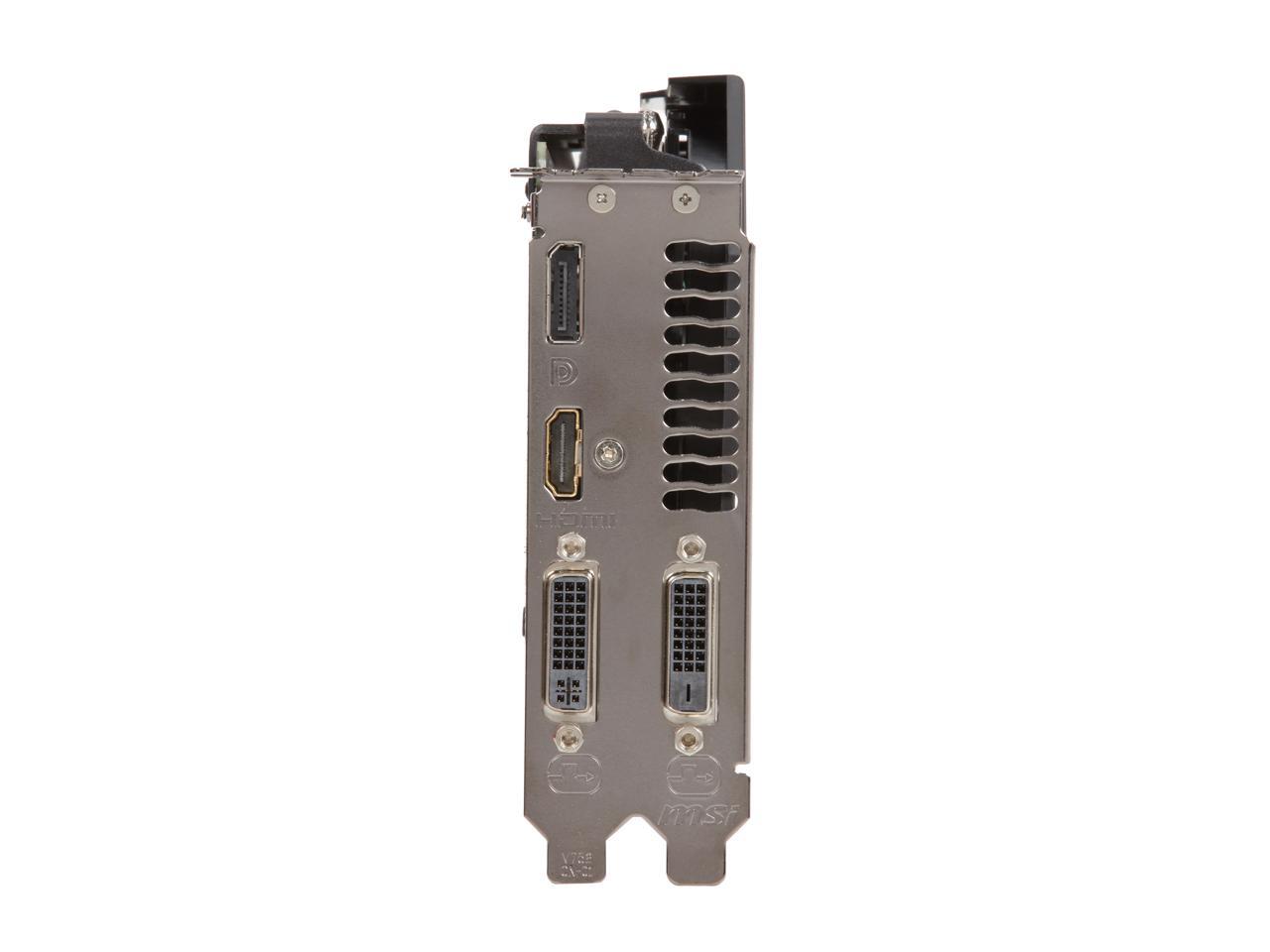 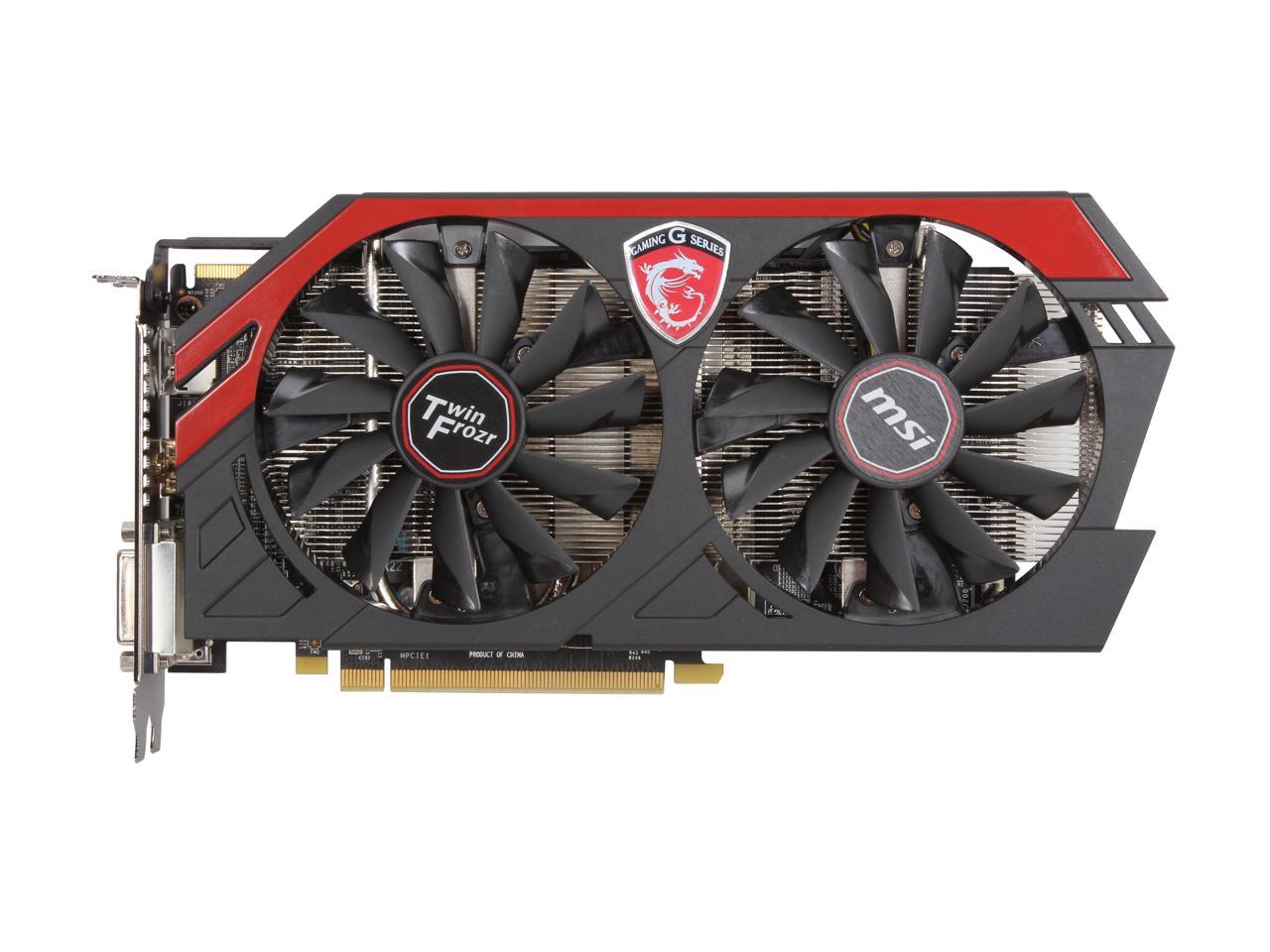 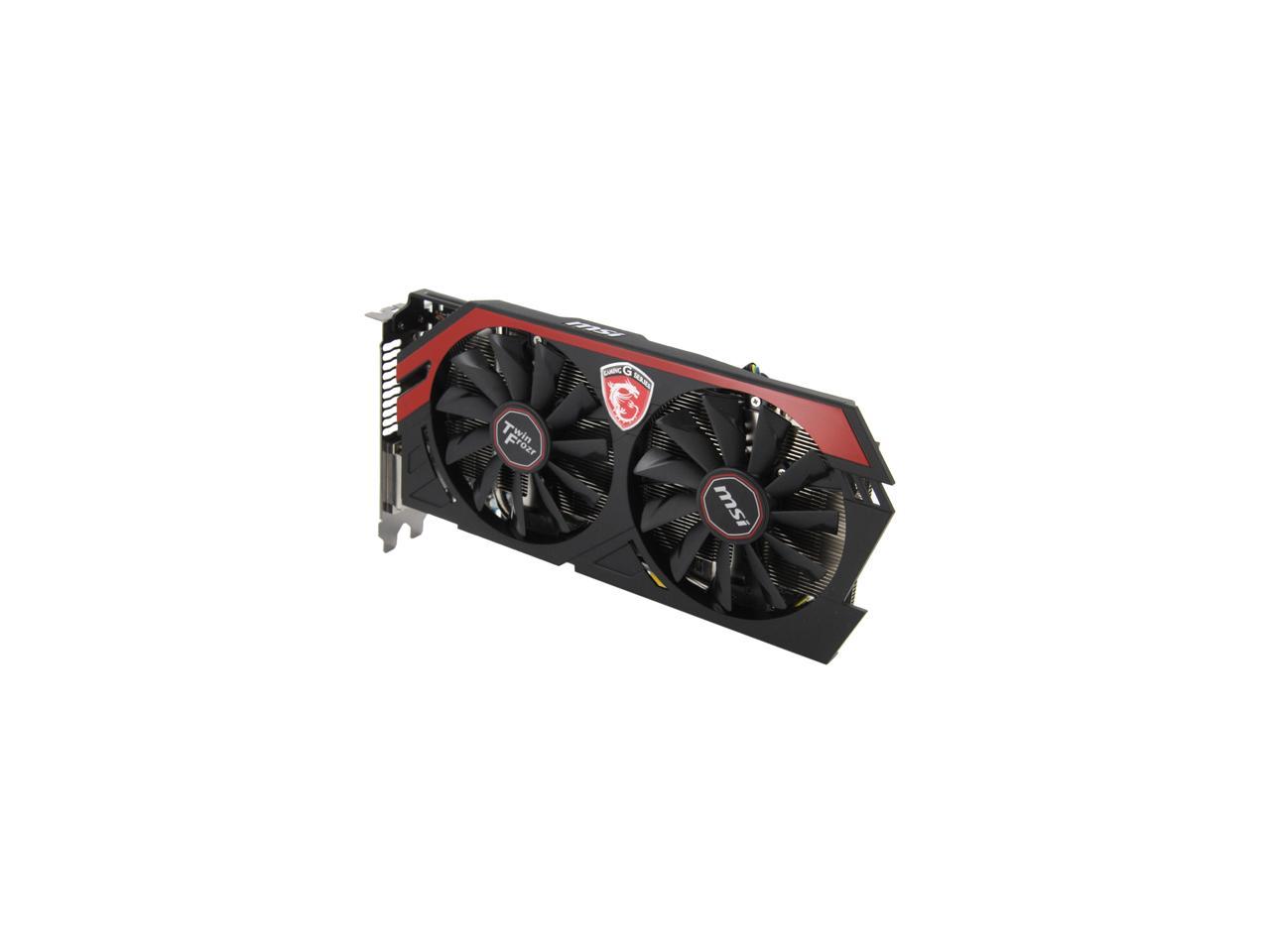 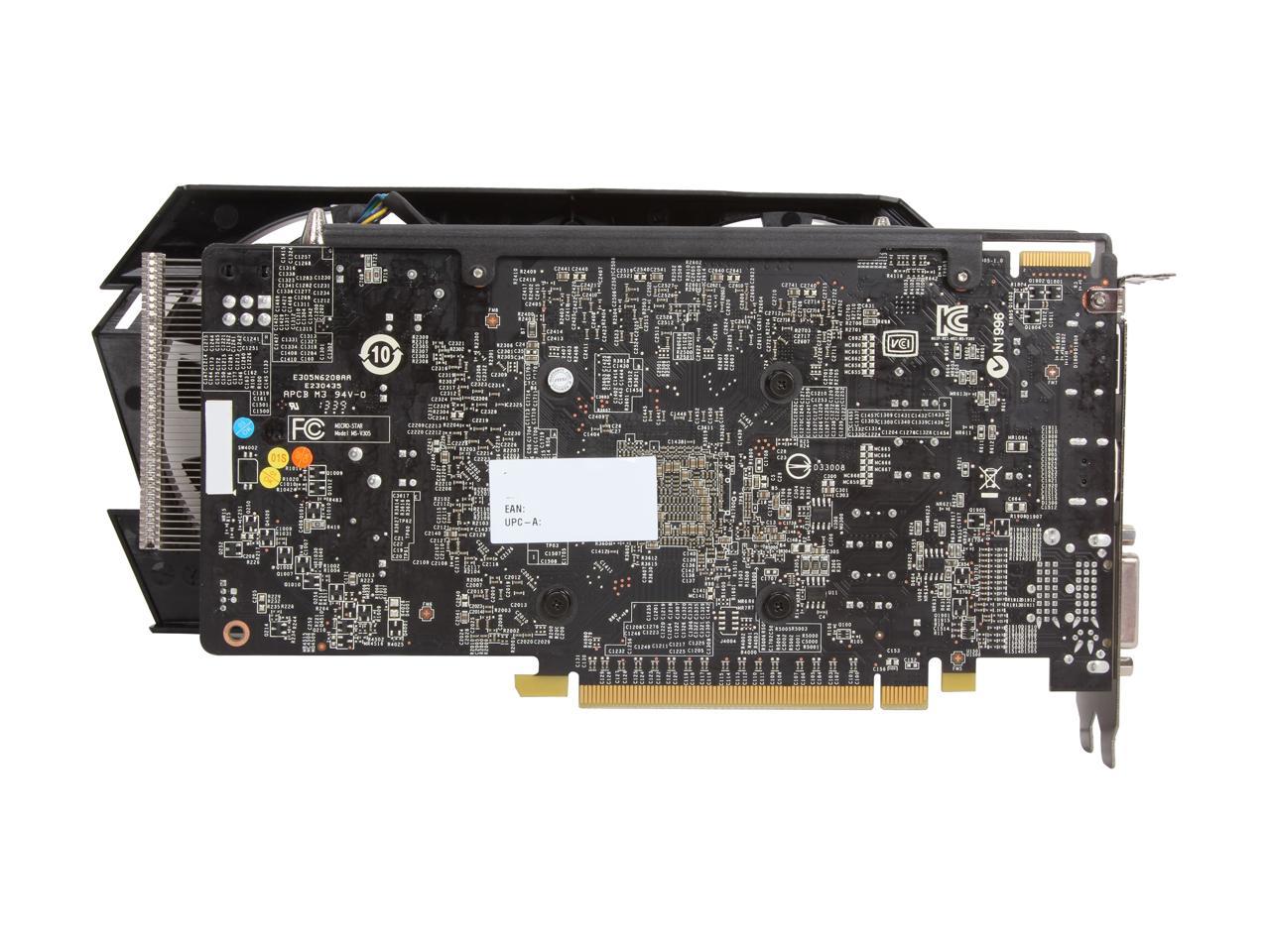 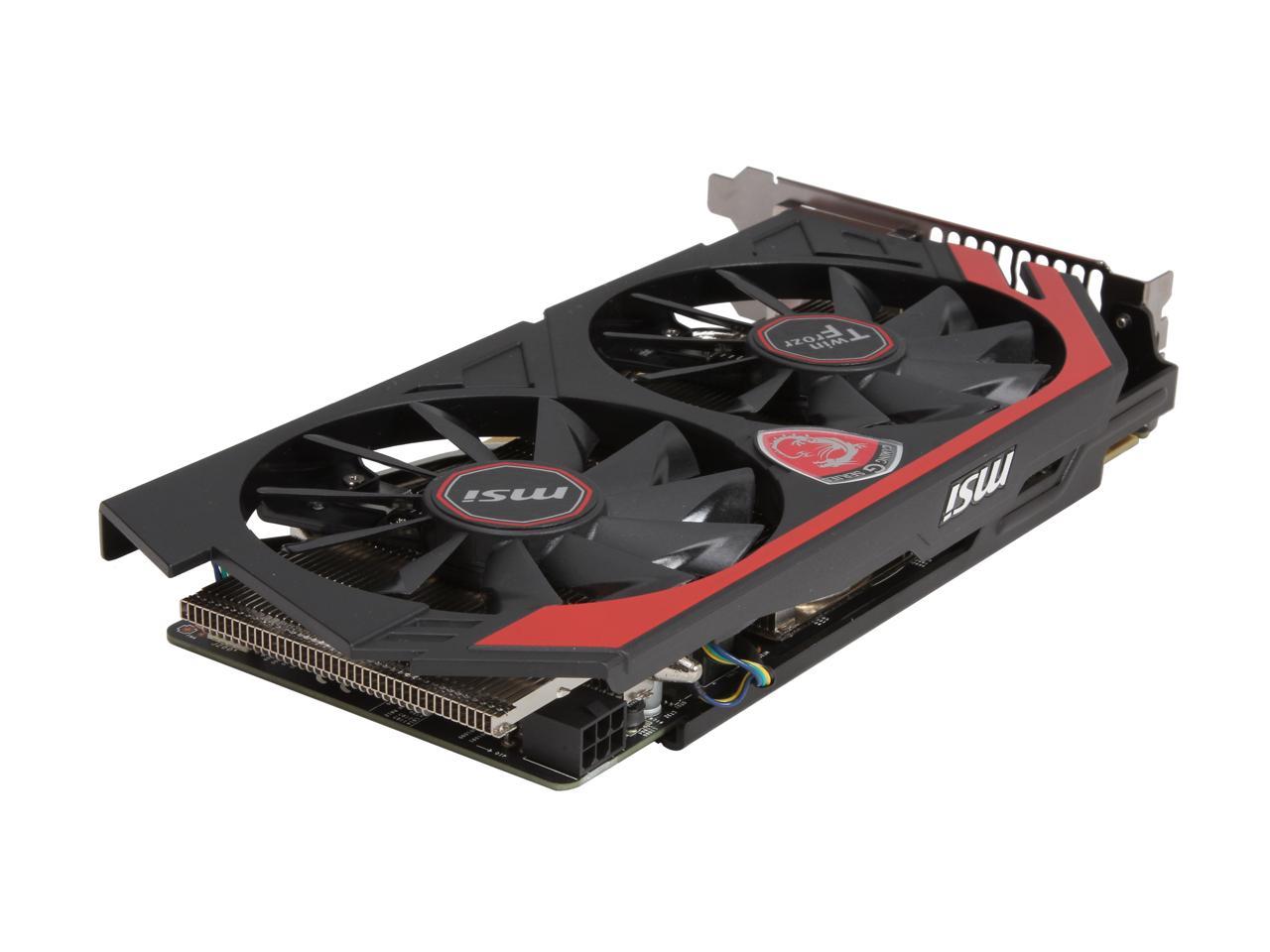 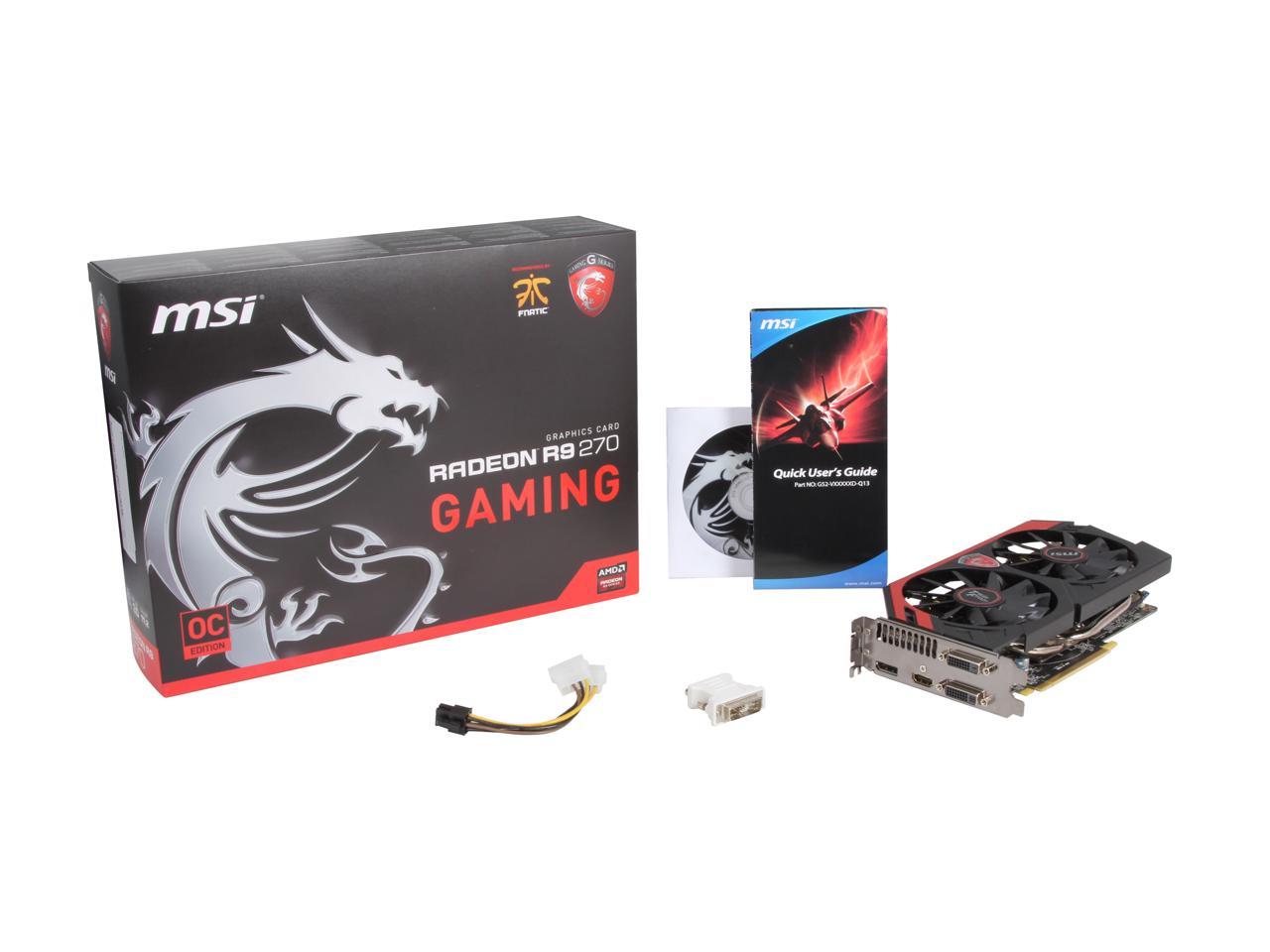 The MSI R9 270 GAMING 2G (V305) Radeon R9 270 delivers competitive performance and great value, perfect for those seeking 1080p gameplay at maximum settings. It's based on the highly acclaimed AMD 28nm GCN architecture and boasts DirectX 11.2 support, giving you the power to drive today’s hottest games — and tomorrow’s. With Ultra Resolution Gaming you can leave HD in the dust by gaming on displays much, much larger. Whether using a 4k monitor or combining multiple HD monitors, you’ll get an expansive experience that’s truly out of sight. A rich set of AMD innovative technologies is included, such as App Acceleration, AMD PowerTune, AMD ZeroCore, and AMD HD3D technology. With these technology advancements, you'll get more than one way to elevate your gaming experience.

Cons: msi has a r9 270 2g gaming card part of the bf4 bundle however this card isn't it. contacting msi regarding the bundle did not lead to getting a key. if u want bf4 u need the msi r9 270 2g gaming with gi joe on the box or you will not get a key.

Cons: 1) Only a single 6-pin connector which may be a turn off for those who wish to OC more than what I did. 2) Fairly large card compared to others...could be size issues for those with smaller cases

Overall Review: After looking to upgrade my HD5850 for awhile, I finally decided to do so whenever I saw this card on sale for the price it was ($160) a few days ago. While it's basically just a rebadged HD7870, it has a few newer features and I was able to EASILY overclock it to just past that of a 270x. I wanted to wait for a 280x to go on sale, but I've yet to see those for less than $300 and was not about to spend that much. The first thing I noticed about this card was just how cool it ran. My 5850 would average 40C when idling and 75C under load. Right now, as I type this, my 270 is idling at 24C and I've yet to see it go over 60C under a full load...the cooler on this thing is quite impressive! It also draws about half of what my 5850 did in terms of power and uses only a single 6-pin connector instead of a dual connector. While this could be a con to those who wish to overclock more than what I did, it's not a problem for me. It's also much, MUUUUCH quieter! The 5850 sounded like a jet engine whenever it was under load and I had fan profiles set up for the fans to run at 50-60% once the temp reached 60C (which it did 100% of the time). The fan profiles for the 270 are similar, albeit tweaked a little, but there is almost no audible difference in the sound of the fans at 18% (the lowest it goes by default) and 50% which is what I have it maxed at for temps above 70C (which it has yet to reach). Performance wise, it's also a HUGE step up from my 5850. In games like Tomb Raider, I had to turn off tessellation and lower the shadow detail (everything else maxed) just to get it to stay at 35fps with occasional dips into the upper 20s. With the new 270, it stays at 60fps with those previous disabled effects turned on and all other details bumped to max. The Witcher 2, another game which I had to frame cap at 32fps and lower some effects on, now runs at a smooth 60fps with everything maxed (except uber:sampling). While I really wanted to wait for a better card, the more and more I looked the more I learned that pretty much anything above a 7870/270x would be bottlenecked by my CPU (i7-870) and would ultimately be a waste of money. Since I don't plan on updating my CPU any time soon, the 270 I bought and oc'ed to be better than a 270x seems as though it's the perfect balance for performance. I am very happy with the purchase of this card and with the excellent MSI warranty, this card should provide many hours of gaming without worries.

Pros: Great card for the price. Quiet, cool, runs most games on highest settings with ease, and can be easily overclocked to be on par/outperform the R9 270X. Nothing much more to say, great bang for your buck card.

Pros: Very nice upgrade for my extremely out of date video card.

Cons: Not related to the card but the free games offer is pretty outdated.

Overall Review: Don't get your drivers from the MSI website, go right to the Radeon site. Gave me issues until this solultion was found.

Pros: The card works, and it works well. I have seen a lot of people whine about being loud, but really even in the harshest of settings it can only ever be considered loud if you are sitting in a silent room with no music from the game that you are likely playing on max graphics that is making it work so hard. I have it in my PC on my desk sitting literally 3 feet away, and it definitely has kicked on, but never even really beyond recognition that its doing it's job. Which I might add it does its job quite well. A fine card, that runs just about anything "casual" to even standard games of today at the highest of graphics. Runs FF14, TERA, LoL, etc, no issues, not even a hiccup at the max of max graphics.

Cons: Cons? Read the pros. I have nothing negative to say about this.

Pros: Great card, Plays everything I need it to and on ultra or very high. THIS CARD IS COOL! This particular card has not run past 60c on me yet. Another good thing is the 1 6pin power connector to save on Watts as well as a molex adapter for those who don't have an extra 6pin on one of their rails. Very Quiet too. Fantastic card looks great, the box this thing is shipped in is beautiful, you really feel like you bought something great.

Cons: Only negatives that cross my mind are: size, it is a rather large card make sure you have room for it, both across and height. I have a gigabyte ud3 and it runs clear across and over my southbridge, but somehow manages to stay cool. And another thing, the biggest con actually , for me anyway. NO CASE STICKER?!?!?? With the glorious box this card comes in I was undoubtedly expecting a Radeon R9 or MSI or both case sticker(s), Even without the exceptional packaging I would expect a case sticker. Perhaps I'm too out of style to realize case stickers aren't cool anymore, whatever it is....it is a let down.

Overall Review: Sure wish I had a RADEON R9 case sticker.....i can see it on my case now to the right of my AMD FX sticker and below the "silently cooled by GELID" sticker.

Pros: Runs all new fps games and Company of Heroes like a champ.

Cons: It's kind of crazy how many amps are needed to run this card. The user should calculate tje amps needed from thier current PSU before purchasing. I had a 600w psu but minimum amps needed to run the card. my PC would not boot after an hour. It felt like my psu was on the verge of killing over. so hot, it would burn you. Bought another psu with +10 amps now everything runs great. Outside of the outrageous demand for power, the card creates ALOT of heat. In far cry 4 my temps hit almost 70C. I am always nervous when GPU temps go that high; even though AMD swears these cards can go up to 100-110F and work just fine. I use Speed-Fan to adjust the airflow when gaming. usually gets temps down to 55-60C at 48 percent fan acceleration. No card-whining either.

Pros: Overclocks to 1025 core nicely if you get a high quality spin of the card and 1500 Memory at 1.125v. Really is amazing with all the new updates after owning the card for a year, but I had my struggles over the year with this card. Read the Cons and other thoughts.

Overall Review: I got this card at the tail end of 2013 when the catalyst driver was still in it's infancy for this architecture. I was able to get my core clock up to a mythic 1125 core 1500 mem at 1.125 using VBE7. It was awesome. Though my games were still under-performing and choppy (Titan-Fall, Tomb Raider, even League of Legends (Wat?) and yet no crashes. Then the good people at AMD optimized the card. They did such a fantastic job of optimizing the card at the end 14.12 Catalyst; that I'm running High or ultra on all my games with zero chop, but the funny thing that happened was that I get random shutdowns or close outs of games. This was frustrating to the point of me wanted to send my card back which I couldn't so... I re-down clocked it in MSI afterburning. Didn't work. The clock stuck it's place in the card bios (which makes sense). I reset my card through VBE7 to 1000Mhz core and set my MSI afterburner to 1025 after several tests (FurMark and hours of gaming) and viola! No more random crashes or shutdowns no matter how long I play and I do have a amazing spin of the card. After going through this I've realized that the AMD updates have put a much greater strain on core clock and need to have a slower core clock and this card was tested when you could have higher one with old Catalyst drivers. Bottom line: I love this card more than ever now since I don't have anymore random frame rate drops or crashes and overall performs better at slower core clocks (though do overclock mem to 1500 [If you can]). If your card randomly shuts down AT STOCK voltages and clock speeds with THE NEW Catalyst drivers before you RMA I'd suggest dropping your Core clock to 925 or 900mhz in MSI afterburner. Don't worry your card will still perform at stock clock, but when frames start getting scrambled the card appears to dial back to the in-between setting 925 or 900 in my tests which will cause a 2 frame per second dip vs a crash. If that's upsetting to you then I recommend an RMA and hopefully you get an awesome spin like mine.