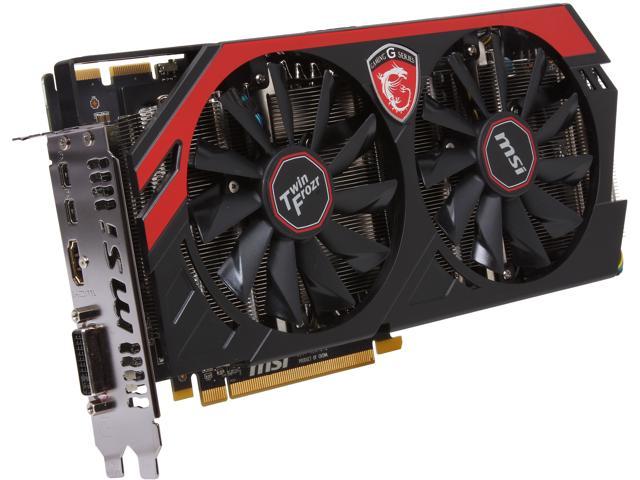 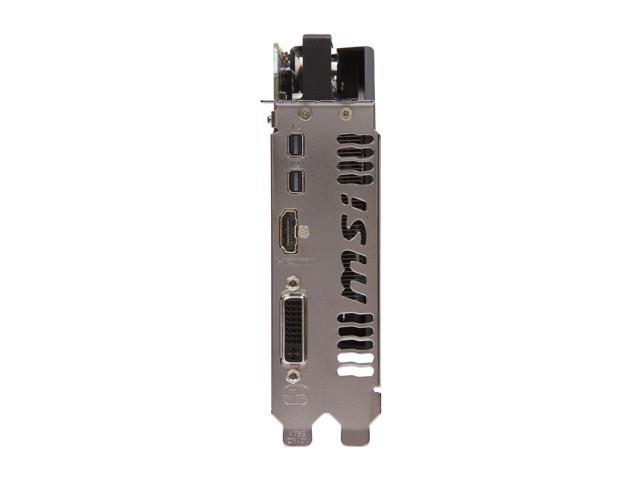 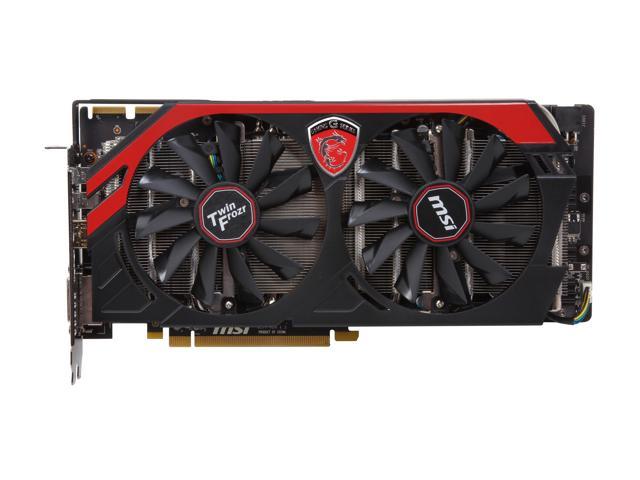 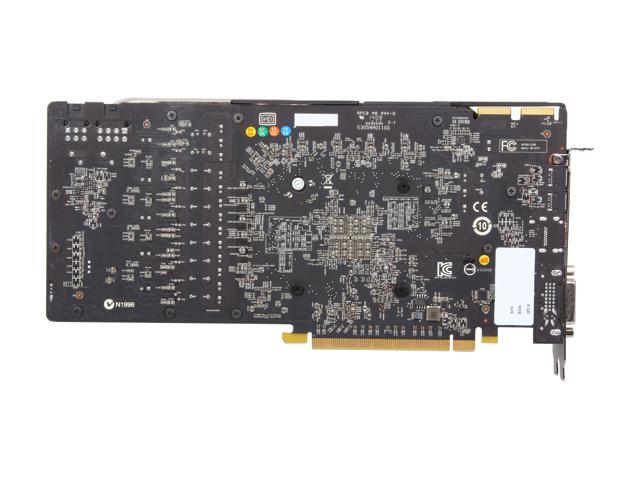 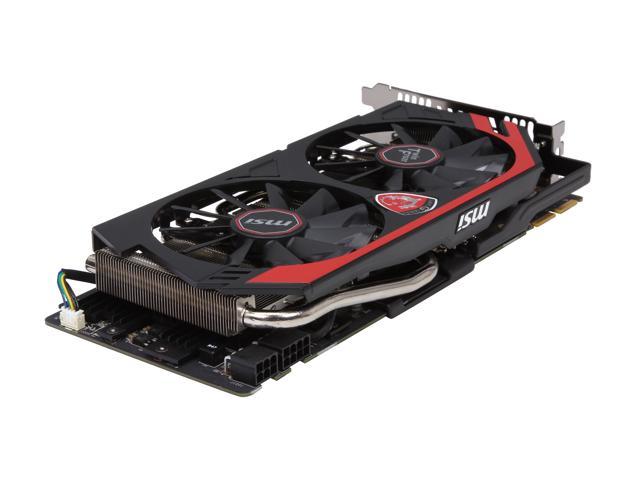 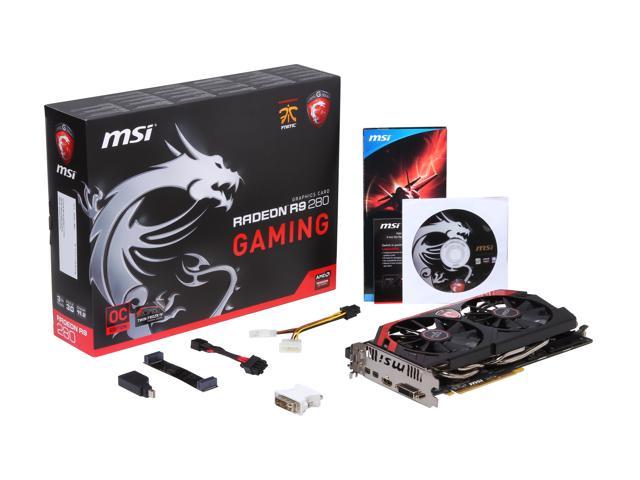 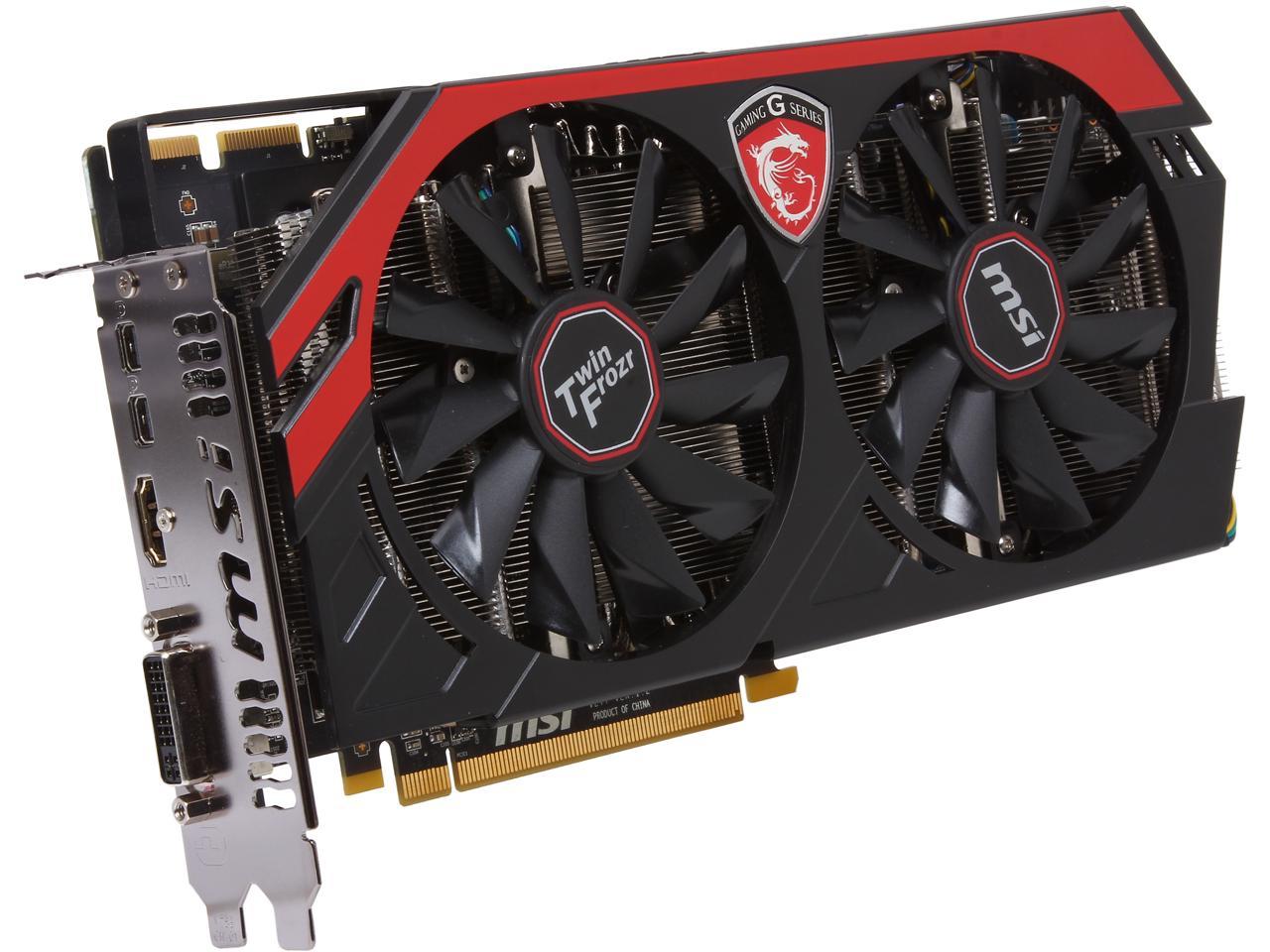 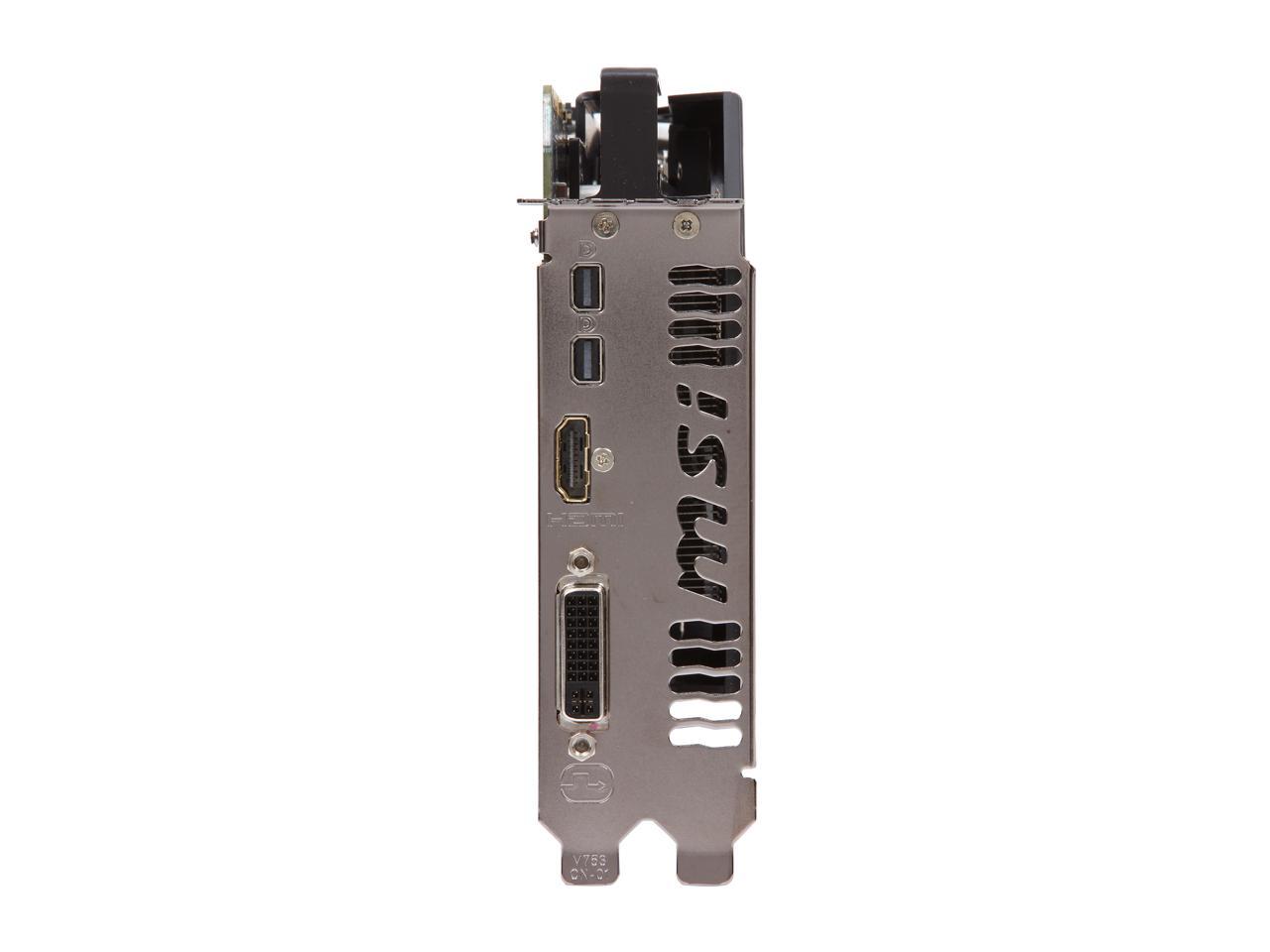 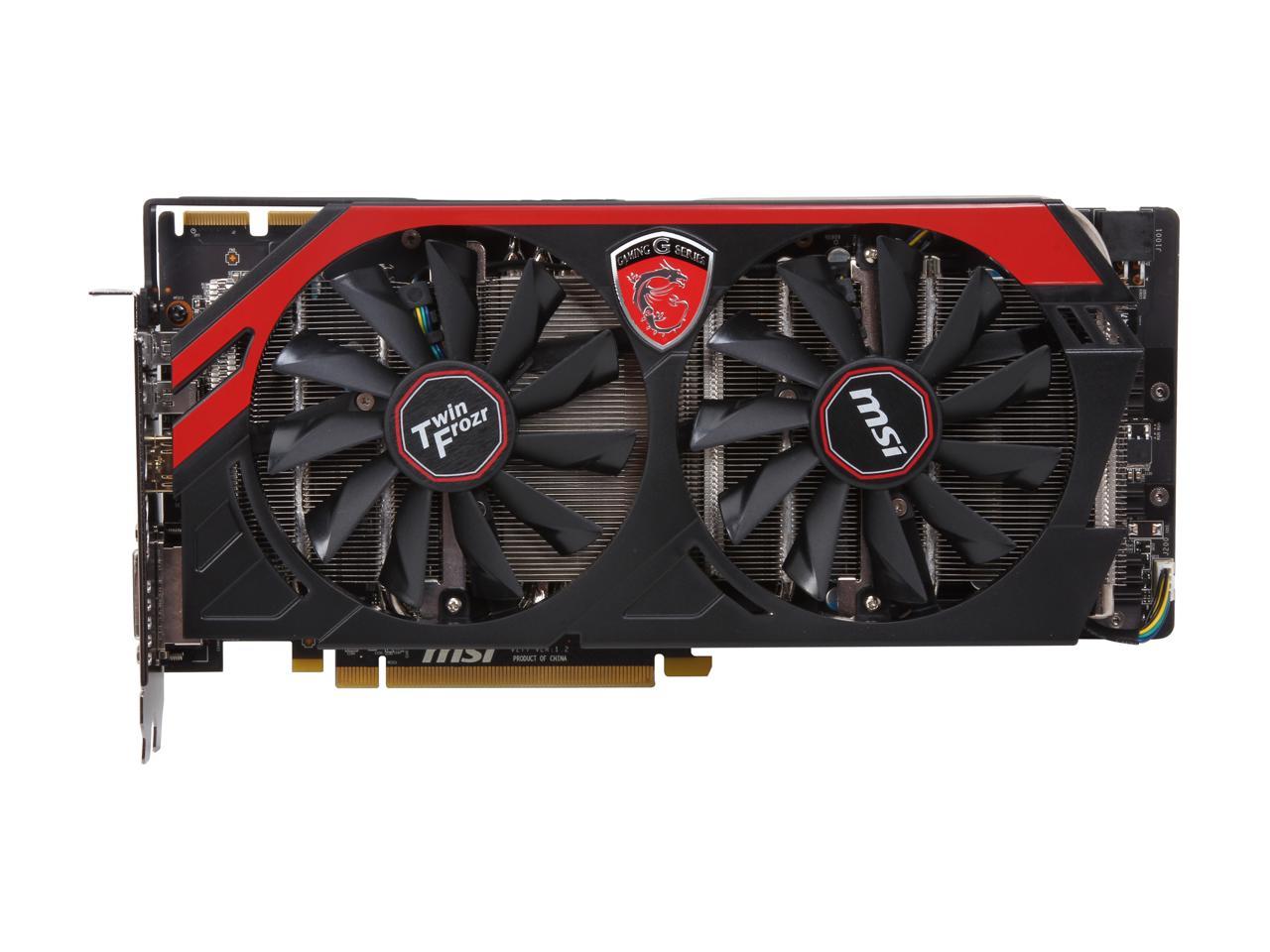 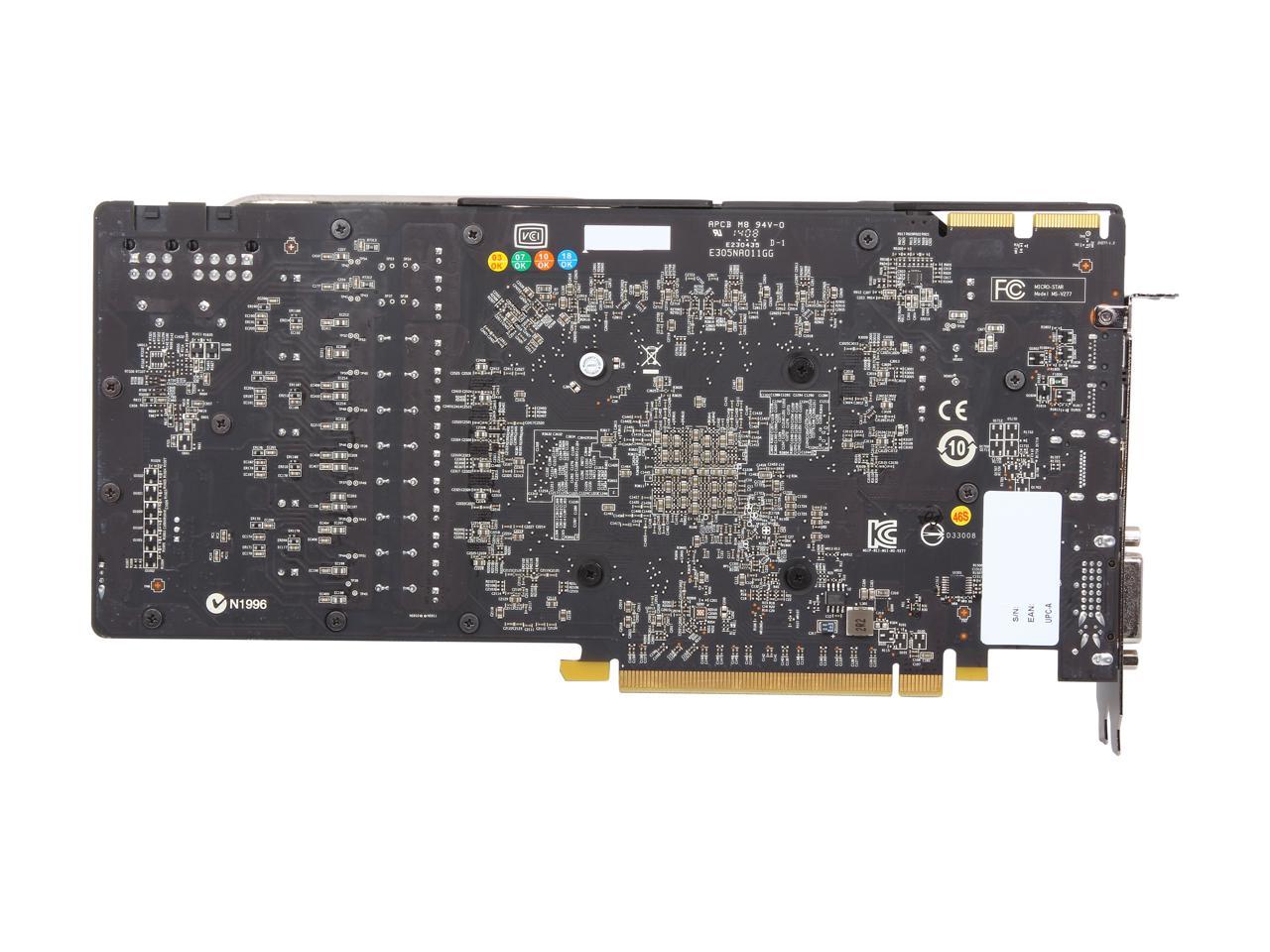 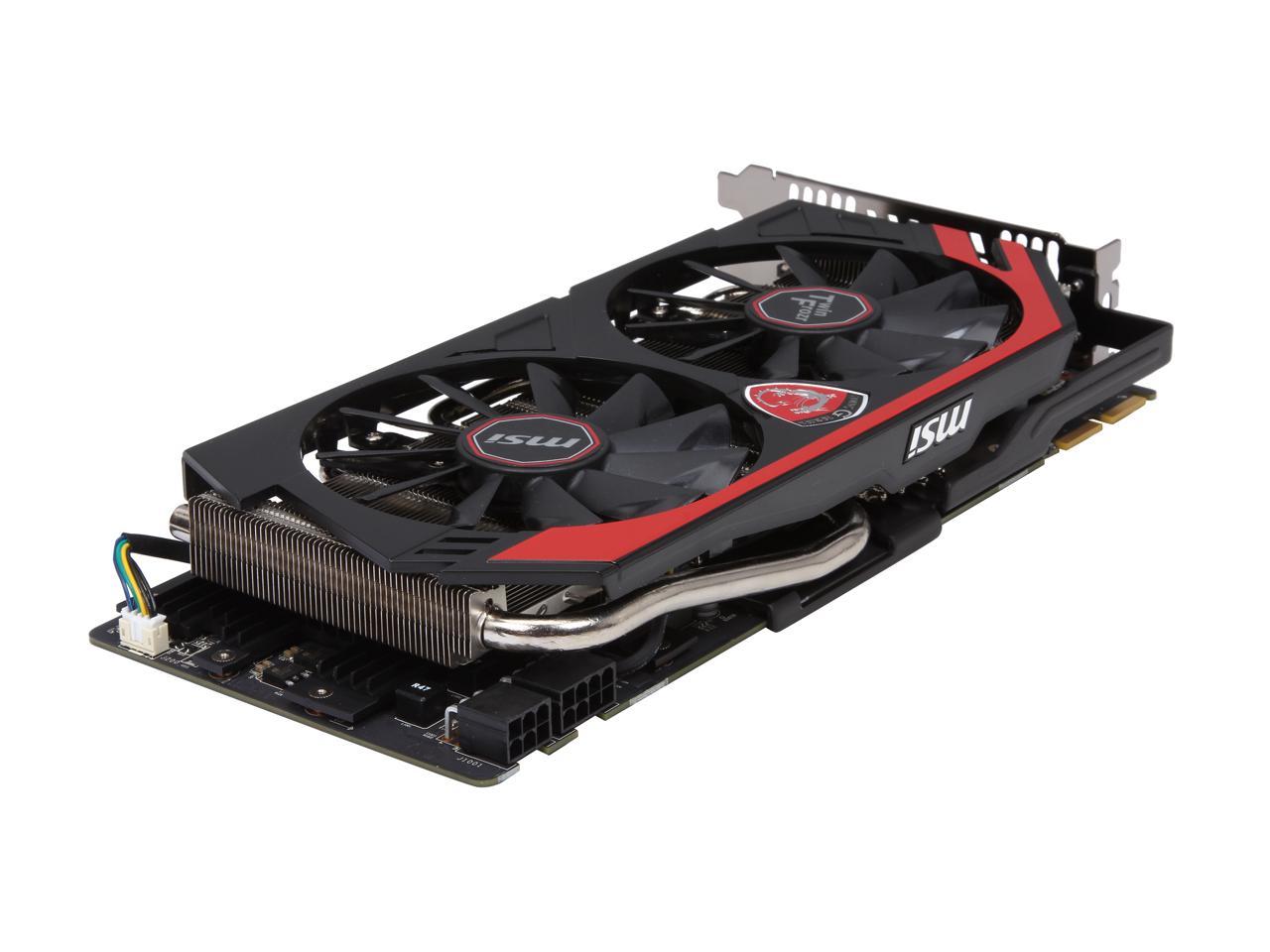 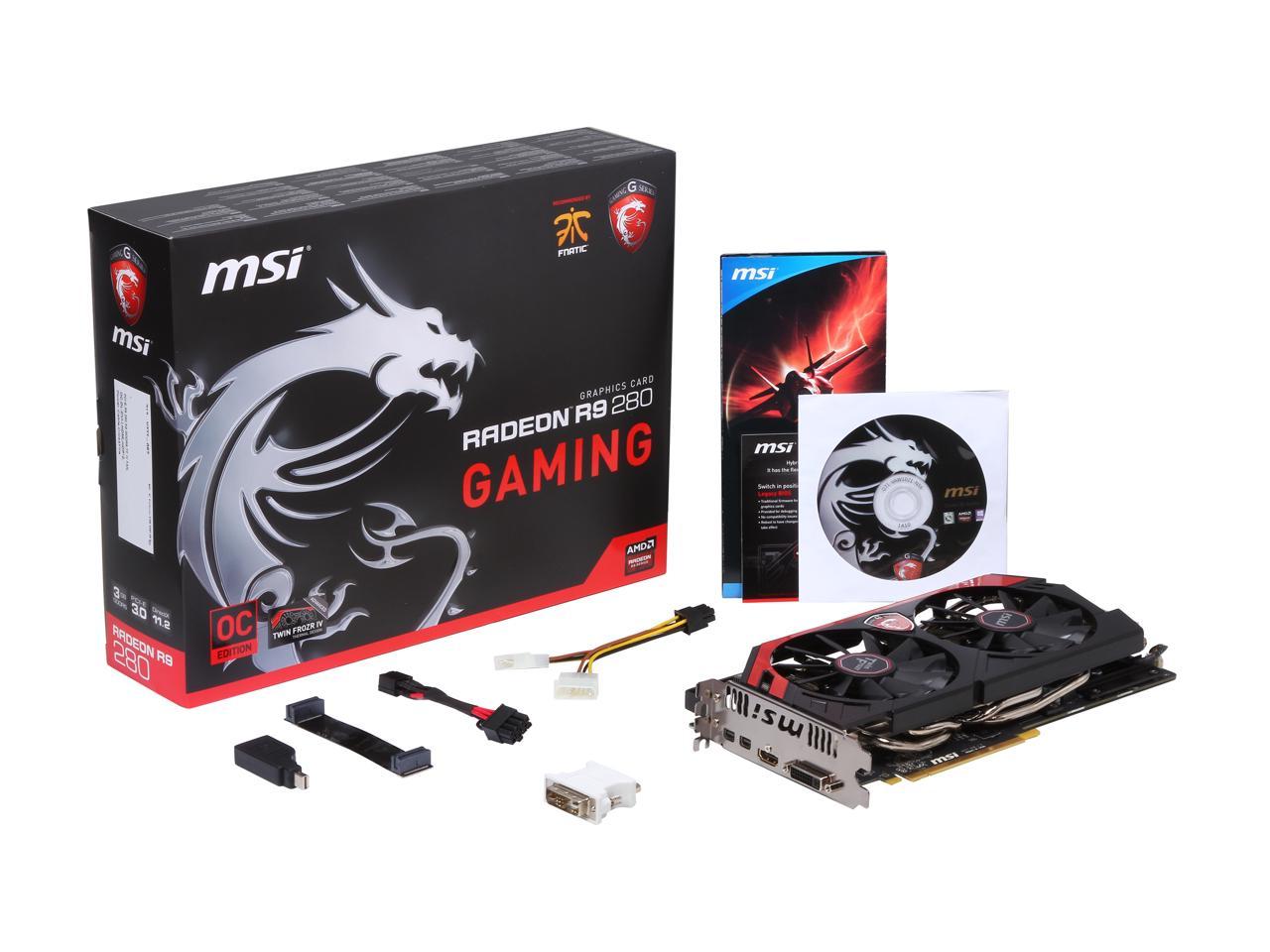 (125) Write a Review
OUT OF STOCK.
Overview
Specs
Reviews Now You're Gaming with MSI A graphics card is the single most important element for more FPS. As gamers, we understand that not just any graphics card "will do." That's why we bring you the best of the best. We don't want to bug you with noise and heat, but we DO want to give you more performance. With MSI GAMING series graphics cards, you get just that. Tune up core clock and fan speed to gain a best performance. MSI's Twin Frozr has been the industry defining graphics card cooler. The first Twin Frozr kicked of the dual-fan trend and today MSI stays true to its dual-fan dual-slot design where others have to resort to less effective means.

The other part that the Twin Frozr cooler uses is a large Aluminium fin grid array that provides a huge amount of surface area for cooling. Heat from the GPU is transferred to the fin grid array by virtue of heat pipes with MSI's special SuperPipe technology. SuperPipes transfer heat twice as fast as regular heat pipes enabling an MSI GAMING graphics card to stay cooler than the competition.

Futhermore, MSI provides all new Airflow Control technology on the Twin Frozr. This new thermal technology leads airflow to the heat pipe by a special deflector on the heatsink, so it can increase the flow of air directly. In addition, this exclusive heatsink design increases the area of the heatsink to enhance dissipation even more.

One of the deciding factors in performance is the quality of the components used. That is why MSI only uses MIL-STD-810G certified components for its Gaming cards because only these components have proven able to withstand the torturous circumstances of extreme gaming and overclocking.

With their aluminum core design, solid caps have been a staple in high-end mainboard designs and provide lower Equivalent Series Resistance (ESR) as well as an over-10-year lifespan.

A Hi-C Cap is a very small, but super-efficient capacitor. Besides ensuring enough spacing around a CPU socket to install large coolers, it also allows for 93% energy efficiency. Thanks to Hi-C Caps, MSI's mainboards are the most energy efficient in the market.

It's a new generation, form-in-one choke, which doesn't generate vibration noise under heavy loads & provides 37.5% higher current output comparing with traditional ring chokes. This is very important when your GPU is overclocked or under high loads, since it requires even more electricity. A built-in screen and video capturing tool named Predator which captures your screen as still images or videos with the push of a button and allows you to capture and record your coolest, goofiest, and most awesome gaming moments on your PC!

MSI Afterburner has quickly become the favorite overclocking software for media, overclockers and end-users. Because of its simple interface, it's easy to learn, but it packs a lot of powerful features like an integrated benchmark utility - called Kombustor - that can check your system performance in benchmarking mode, or run as a stability test.

Don't speak English? No problem: MSI Afterburner is translated in many languages including Russian, Spanish, Chinese and Korean! Not satisfied with the looks? Just change to one of the many different skins or create one yourself with ease!

Even better, you can run Afterburner straight from your smartphone! Download the MSI Afterburner App from Google Play or the Apple store and start overclocking. Cons: Rebate denied because my postmark was 3 days late. That is my fault. I called and there is no wiggle room for being tardy but if you forgot to include a different requirement such as barcode you get another chance. I had 15 days to submit. Actually I had it sent in time but the Post Office sent it back due to it being to thick to go through the automated sorter. I had to add postage. so guys take a heads up on MSI rebates and the amount of postage you put on fat envelopes

Pros: Very quiet fans. I can run this at full load for hours on end and not go about 65c with the fans at about 65-70% speed. Powerful card. I was able to run Middle-Earth: Shadows of Mordor with max settings and get flawless FPS. Combined with an AMD FX-8350 on a Corsair Hydro-50, it's a great combo. Looks awesome. What more can I say.

Cons: I didn't get any swag or stickers to put on my case. Now how are people going to know I'm rockin this sick MSI GPU?

Overall Review: It'd be nice to have some stickers in the box for your case to wear as a badge of awesome.

Overall Review: The card is 11 inches long and 5 inches wide. It fit in my case just fine, but take note if you have a HDD bay by your PCI-E slots. I have not seen any artifacts in my games. BF4 Runs on Ultra which I didn't think I could have achieved. This card requires one 6 pin and one 8 pin from the PSU. (The card has a 8 pin adapter, so no need to buy something else). Your PSU should have a 6 pin, but it has an adapter just in case for that.

Pros: The card works great. Every game I've played runs at 60+ fps with ultra settings including Far Cry 3, Tomb Raider, Dishonored, and Skyrim with 50+ mods. I use MSI afterburner to overclock. it's simple and easy to use. I OC'd the power to +20% core clock to 1080 and memory clock to 1350 and had no problems. Temp never went over 60c. The Twin Frozer heatsink seems to work very well.

Cons: The only issue I had was with the bios switch. The default setting is Hybrid which is supposed to support legacy bios and UEFI(according to the instructions) which I had no clue what that was until I looked it up. Apparently my system isn't compatible with the Hybrid setting which I didn't figure out until after the card was installed and my pc wouldn't boot. It worked fine after I switched to legacy mode so no big deal. It would be nice if there was more info about what systems are compatible.

Overall Review: I used the AMD gold reward to get 3 games valued at $70 bucks according to current Steam prices not the $150 advertised. I can't complain because they were free and the card was a good deal even without the games. On my receipt Newegg took $150 off the price of the card and made it look like I paid for the games. I assume this is so people can't get a full refund on the gpu. I don't care because I would have gotten a replacement if there were any issues.

Pros: This card is really fast. I upgraded from a GTX 650 to this and now I went from 50 FPS on low settings in TitanFall, to 60 FPS with almost all the settings maxed out. I'm not having any trouble running games at max settings with this card. My system specs are 16GB of GSKILL RipJaws, and an AMD Phenom 2 x6 black edition clocked at 3.4 Ghz. I'm not noticing any differences when clocking my CPU down to test, so a weaker CPU and less RAM would run this card just fine. Another pro is that it works perfectly fine with 500 watt power supplies. I have a 600 watt and I didn't want to upgrade my PSU as well. It also runs really cool. I haven't gone above 50 degrees celcius on this card yet, and I've been stress testing it.

Pros: This is an incredible non-reference R9 280 for the price. I picked this particular card because it was on sale, had the best factory overclock, and I heard great things about the twin frozr design. Removed my R7 250, seated the R9 280, connected a 6 pin and 8 pin pci-e, done. Included in the box was a drivers disc with a few other programs like the MSI gaming app, and MSI Afterburner. Absolutely love using the MSI gaming app, specifically on OC mode boosting the core clock to 1,000 Mhz. I haven't even overclocked this card with afterburner and it runs any game on ultra with max anti-aliasing and anisotropic filtering at 60 frames no questions asked. Temperatures and noise levels are beyond fantastic with the twin frozr design keeping this card uber cool and ridiculously quiet even under heavy load. A nice little feature in the gaming app called the "Cool down" button runs the fans at max, cooling the card to idle conditions within about 40 seconds. Hovering around the $200 price point, this particular card is a great buy for the price to performance ratio and the fact it can potentially be OC'd further to match the performance of the 280X.

Cons: I have nothing bad to say about this card at this time, only time will tell. I see a lot of people hating on this card and will never understand the AMD vs Nvidia war but i feel that this is a well rounded card for any PC gamer.

Overall Review: I did upgrade my power supply to a Rosewill Hive 650 in order to power this card. I wasn't sure how much power it would draw but it required one 6 pin and one 8 pin pci-e connector so i went with 650w just to be safe while also leaving some headroom for a cpu upgrade.

Pros: - The card was easy to install. - Came with all the wires and accessories that it said that it would, witch gave me the 8-pin wire that I needed. - Not hard at all to run the drivers installer, but could do without some of the, "software, and the offers" that are available on the disk. - Run's almost anything on max settings, but GTA 4. - Overclocking is easy, and it gets pretty good speeds even on default, when you get it out of the box. - The card could probably do better if I wasn't running on a Intel i3.

Cons: - None, like all the MSI stuff I buy, there's never a problem. I'm always a happy customer.

Pros: Ultra high settings on 99.99% off all the games in my Steam library. Stays cool. Over clock was simple and works great. The two fans work well, even better with my case design. Install was easy. The packaging (I used to work at Apple, visuals is a big thing over there) and contents of the package is out of this world. I loved that it came with adapters, literature, software, connectors, etc. And all wrapped up in a very well designed box/package. I just looked at the cross fire figures of this card, and I'm stoked to see that 2 of these cards outperforms the 290x at almost every level (except for some manual over clock situations). This is my first time switching to the dark side from nvidia. I haven't seen any issues so far.

Overall Review: If you don't have the money to drop on a high end card, but you may want that kind of performance for the future... why not get this card and save for a second 280? The crossfire numbers for these cards are awesome. I play a lot of FPS, RTS, and hack n slash and so far I've been more than impressed. I don't run multiple monitors, so I can't comment there. I also have an i7 and 16GB of DDR3 RAM, so that also may help some of my performance. But for the price point, the 280 is a great card. MSI was a little pricier than some of the competition, but I wanted to match my board. I don't have any regrets going with this card. I love the results so far, and I love the crossfire figures for the future.