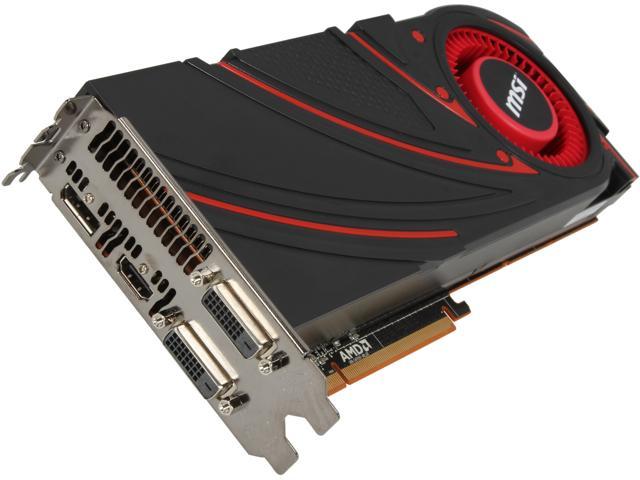 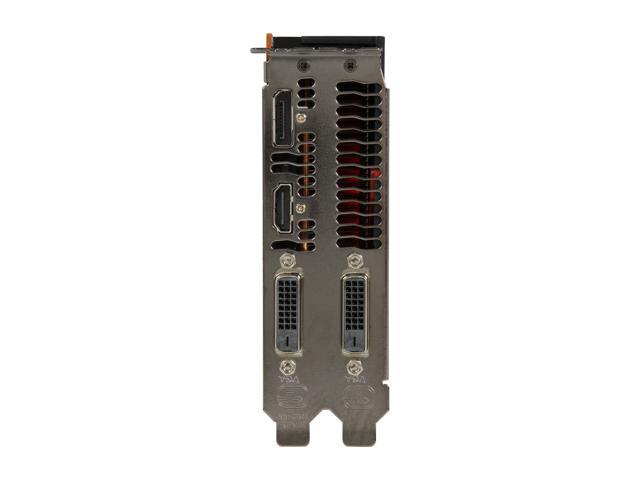 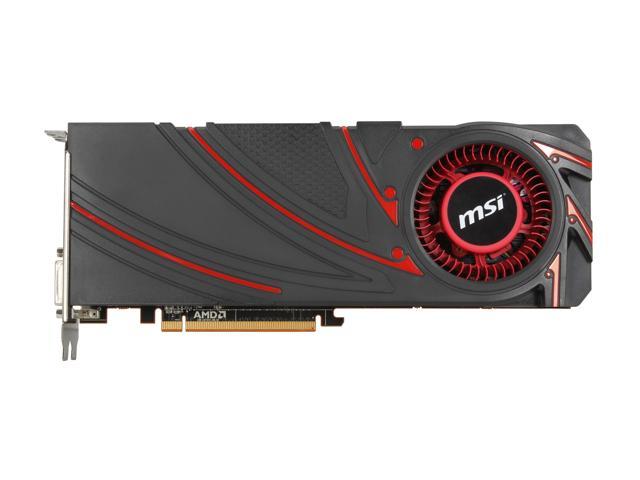 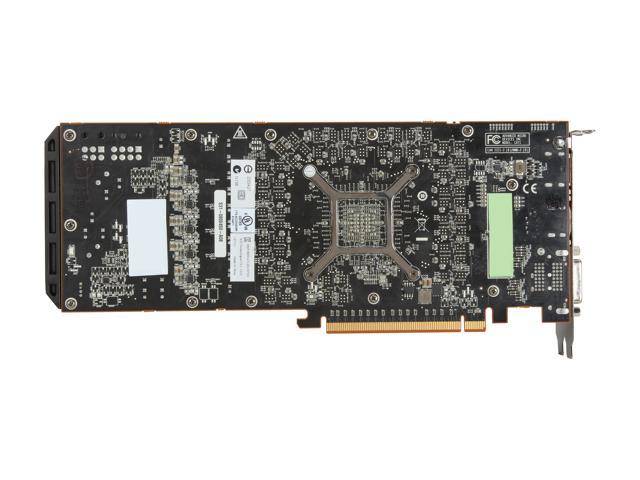 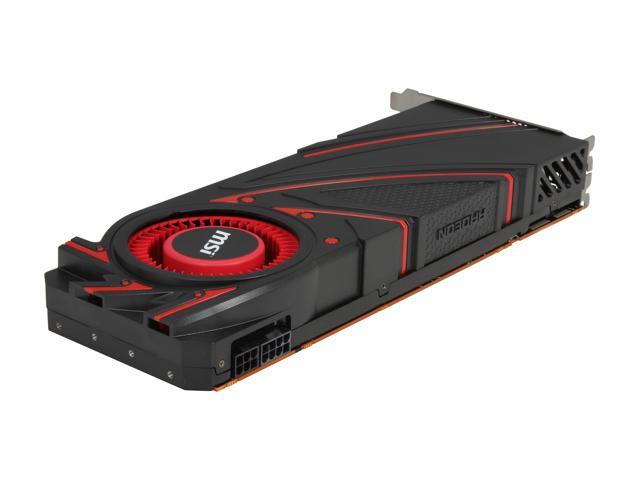 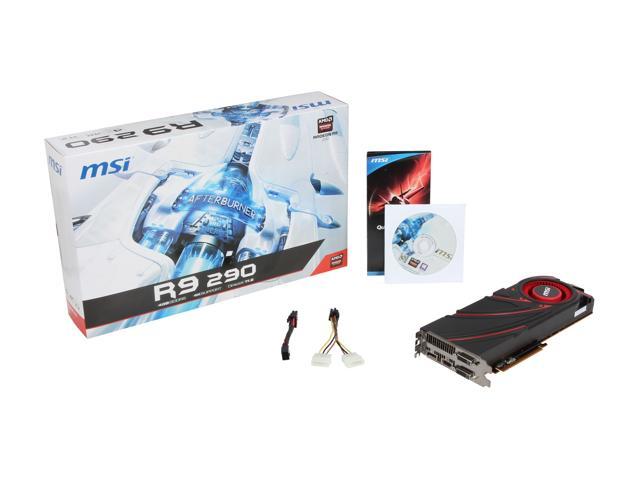 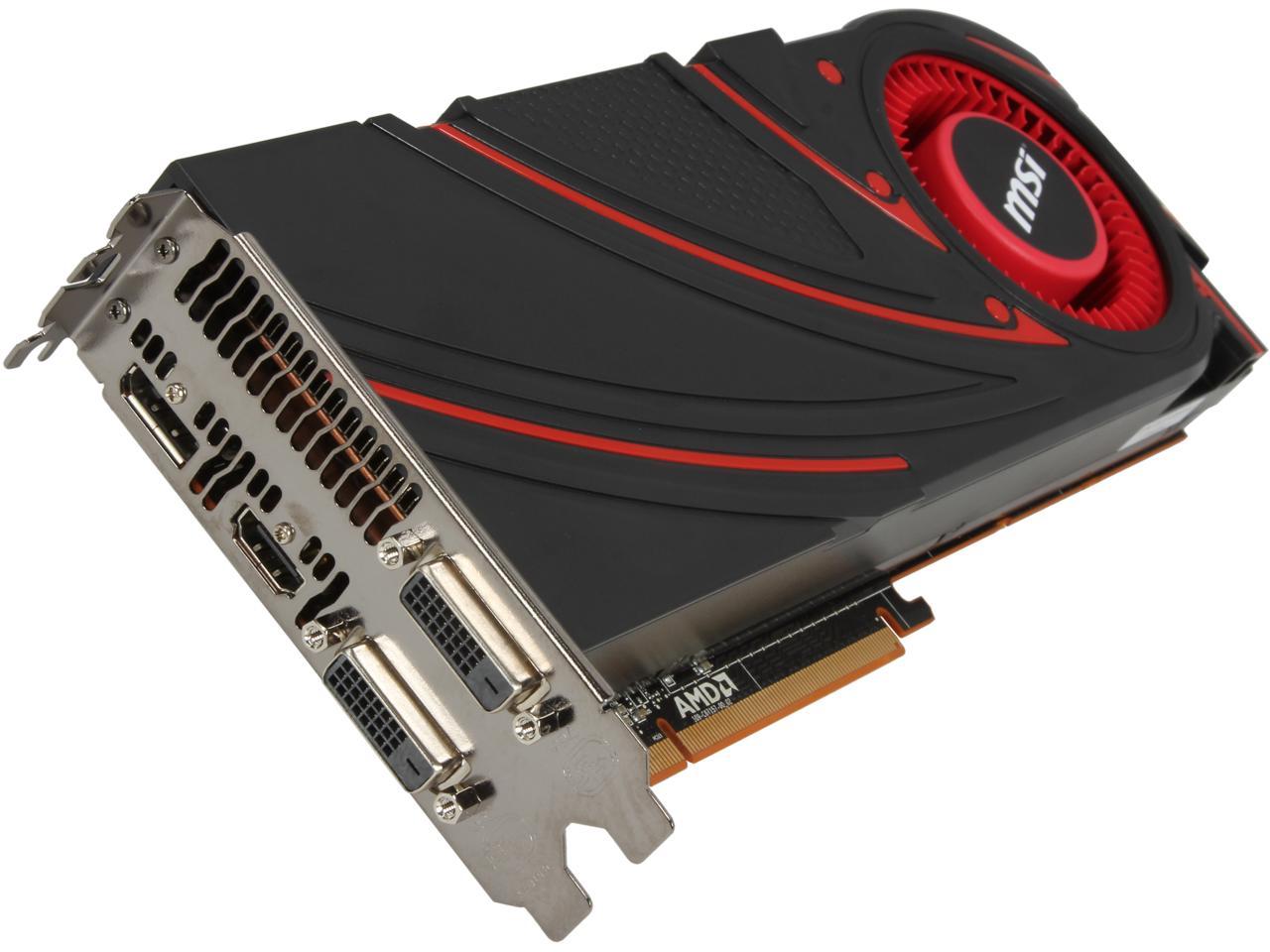 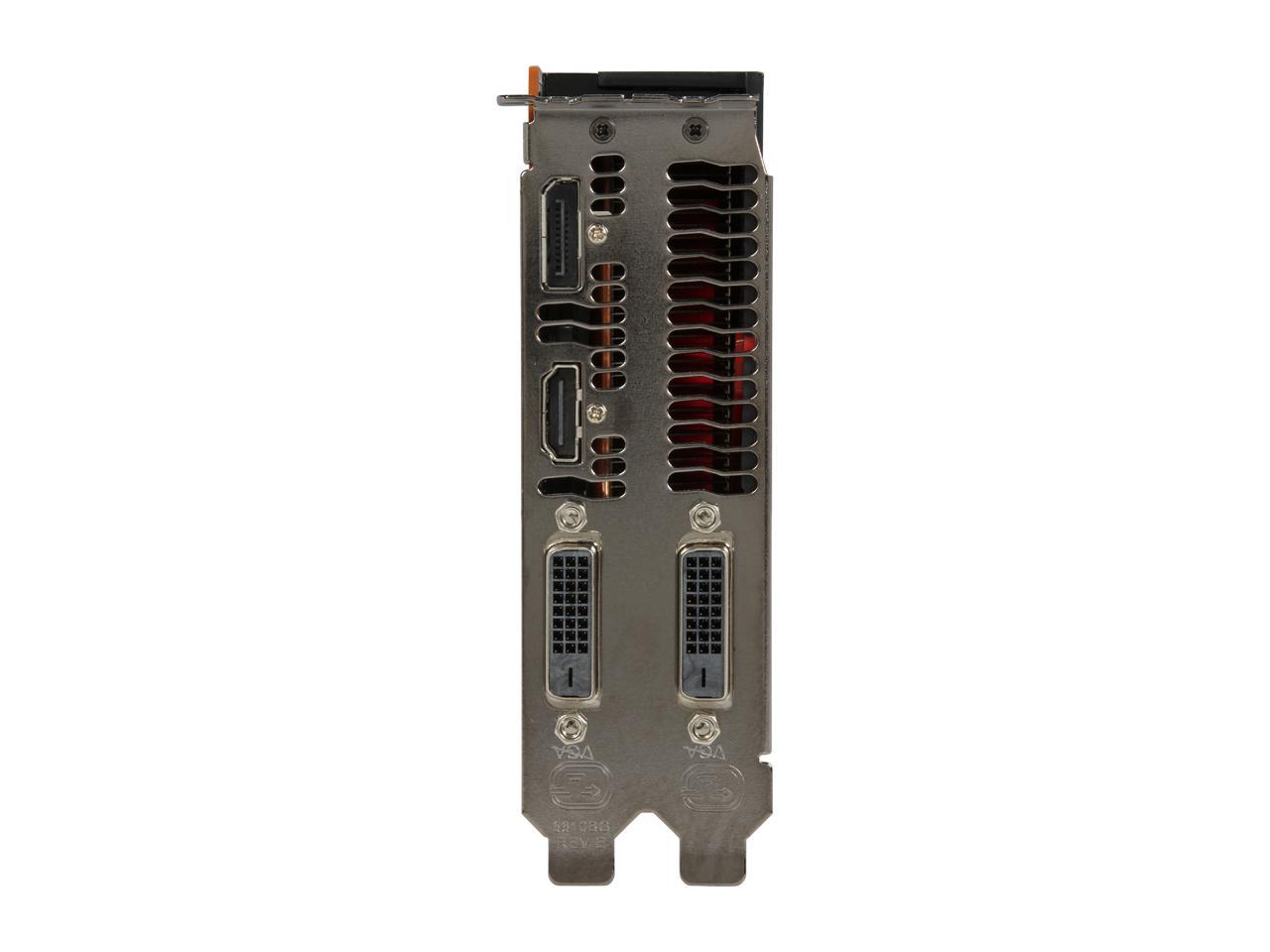 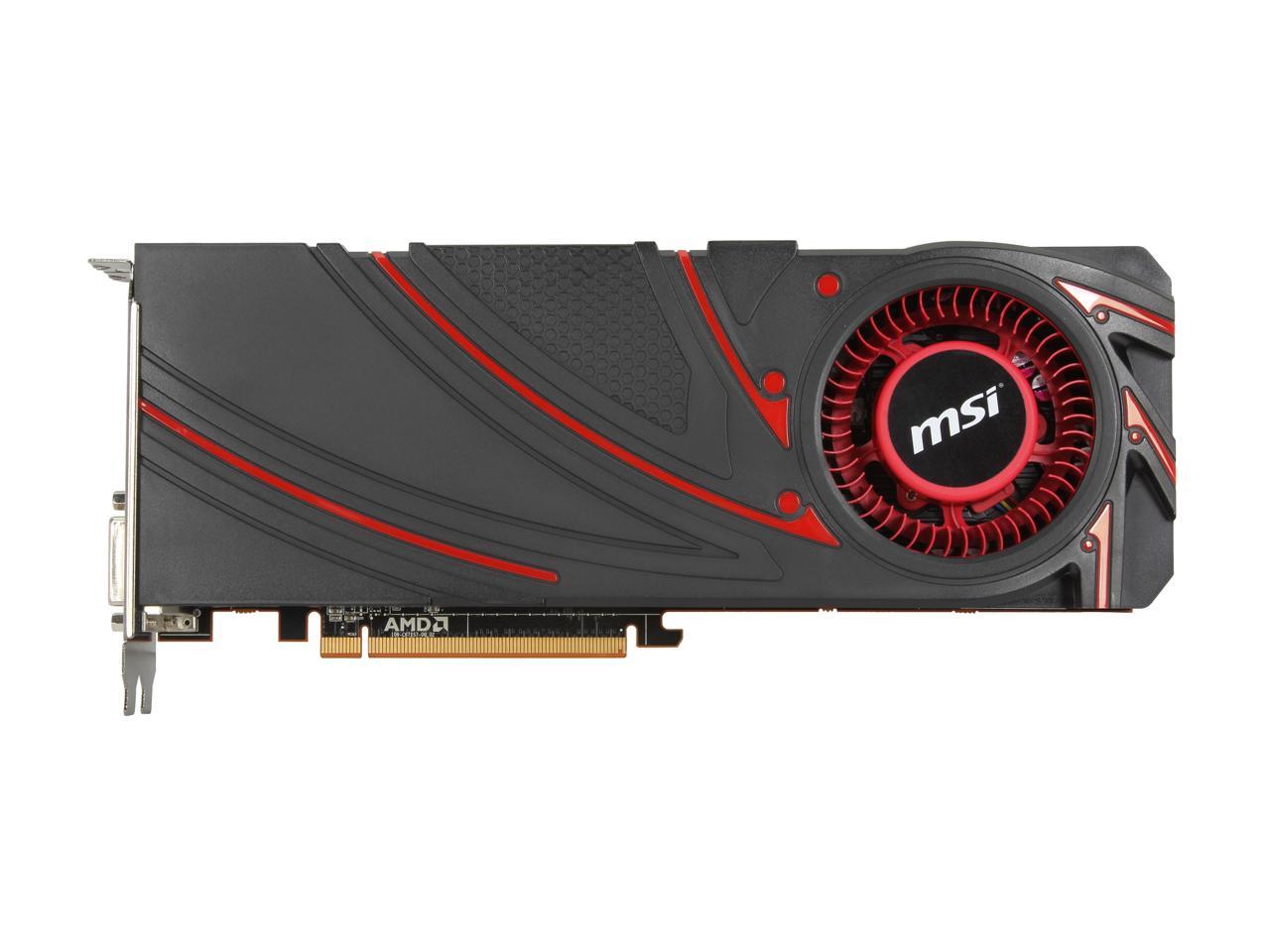 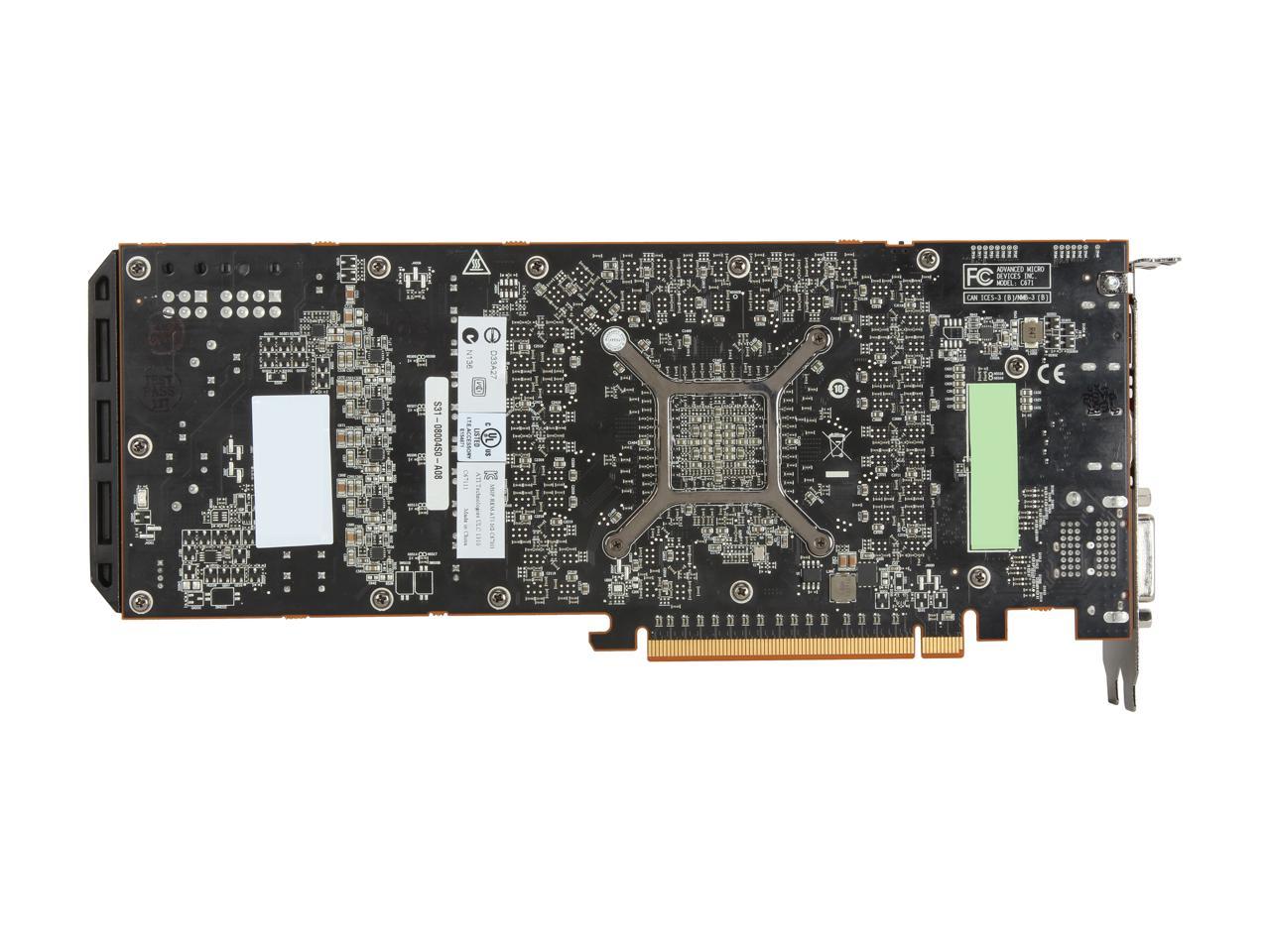 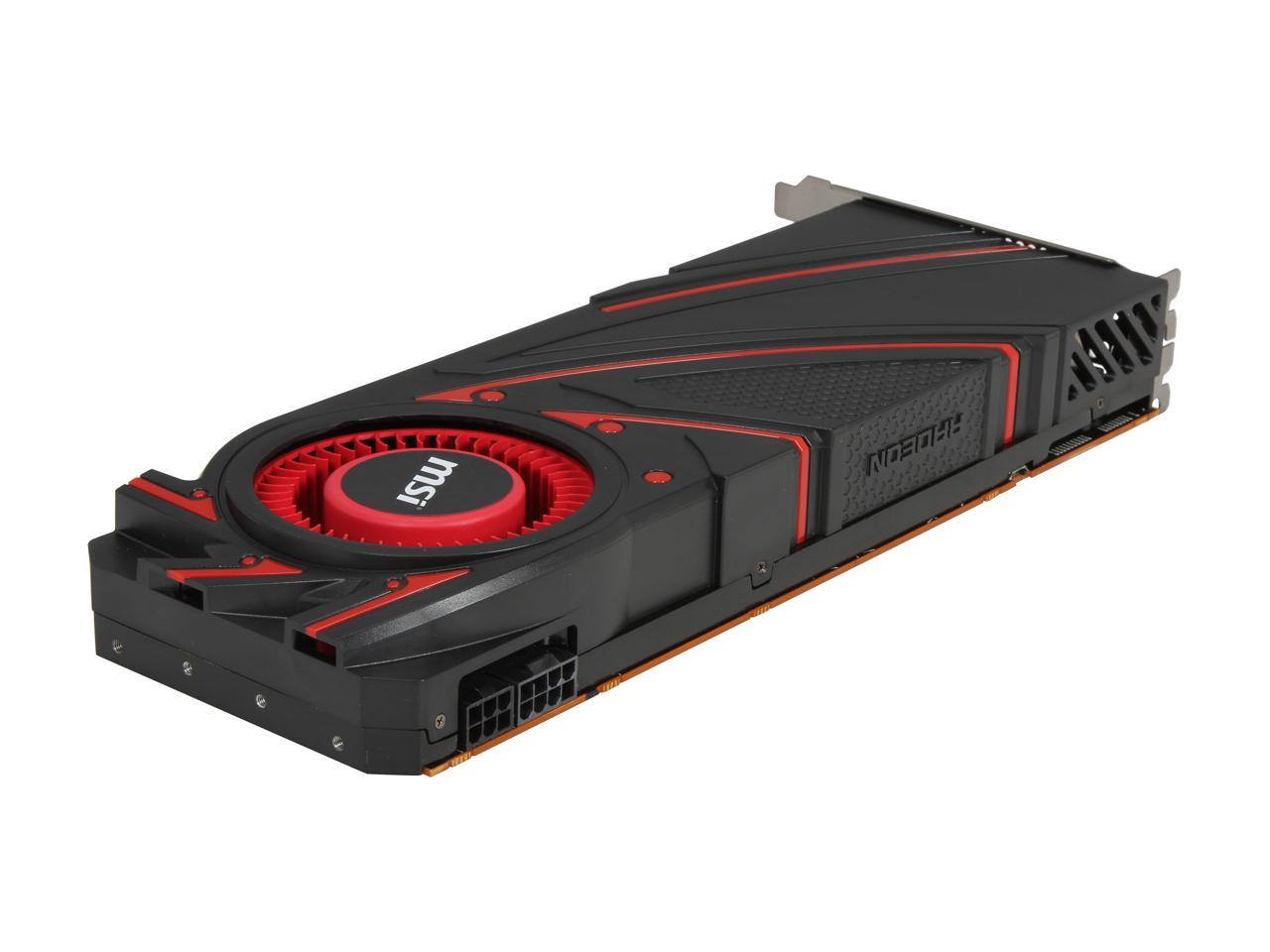 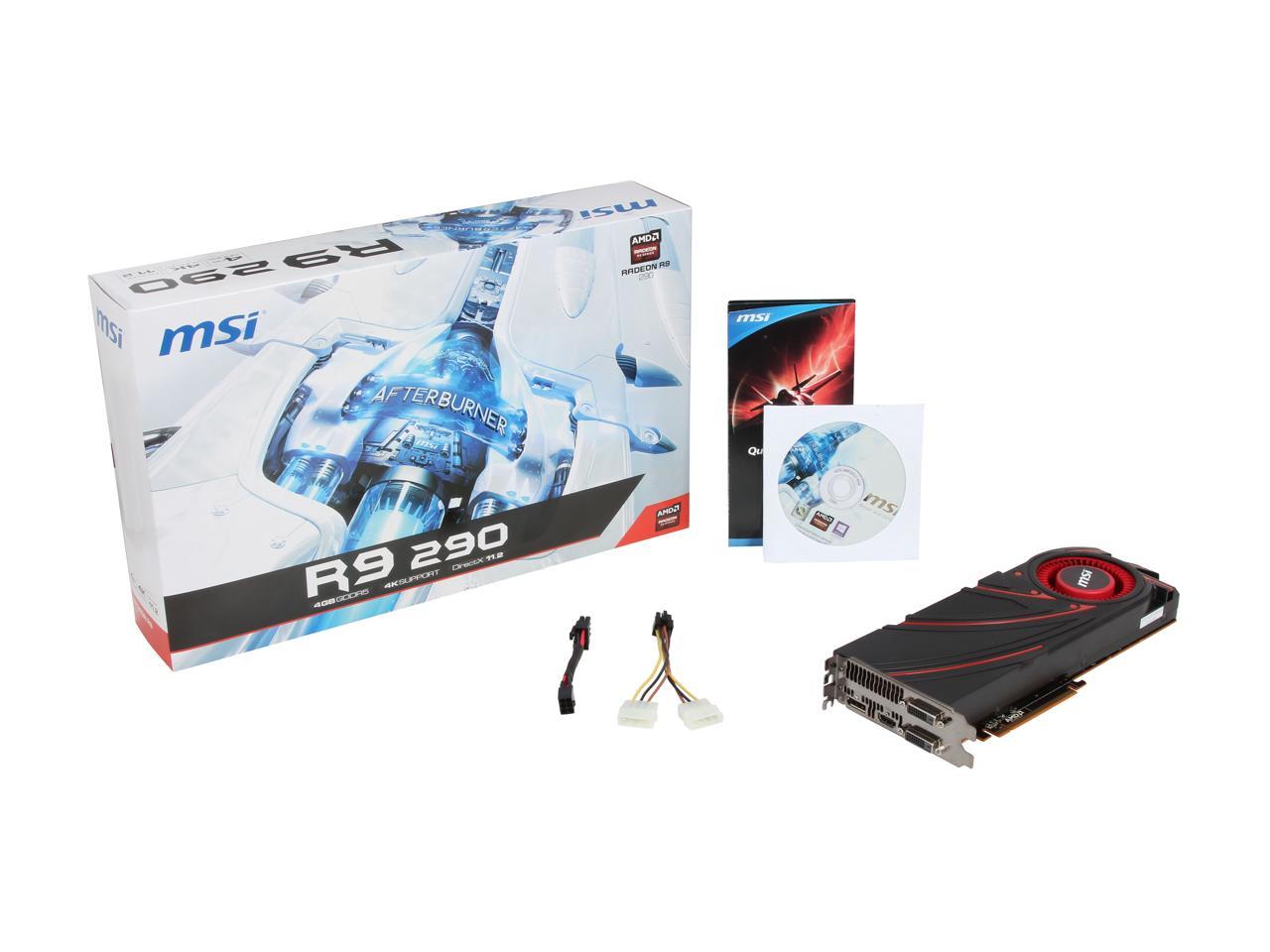 The Radeon R9 290, the AMD's new flagship GPU, offers the weapon of choice for gamers who demand the best. It's based on the new 28nm Hawaii GPU architecture and introduces the support for DirectX 11.2, capable of rendering reality-redefining imagery in the hottest titles. With a massive number of stream processors and a gigantic 4GB GDDR5 memory, this GPU delivers the performance you need for smooth gameplay at extreme settings. The new CrossFire technology allows you to build a multiple graphics card configuration without the use of interconnect bridges. With Ultra Resolution Gaming you will leave HD in the dust by gaming on displays much, much larger. A rich set of AMD innovative technologies are included, such as App Acceleration, AMD PowerTune, AMD ZeroCore, and AMD HD3D technology. With these technology advancements, you'll get more than one way to elevate your gaming experience.

Cons: Getting expensive, not sure I would buy one of these if I can get a GTX 780 for less. Loud when under full load if stock fan is used. Will not be modded to an R9 290X (my Powercolor can)

Overall Review: My first card had terrible coil whine, see review below. My second card had less coil whine and now that I have both my R9 290's under water I am finally a happy man. These cards tear through anything, currently I am hitting over 16,000 in Firestrike (R9 290's in CF), a single card will do around 9,000. In Unigine valley I am seeing just over 110 fps. I have an Intel i7 3770K running at 4.6ghz. I am only playing BF4 right now and I can say that there is less texture shimmering with the CF R9 290's than there was with my GTX 780. I am experiencing no runt frames with these cards in CF. I game at 2560x1440 and am seeing around 75-105 fps in BF$ at ultra with 4xFSAA enabled. Extremely happy with this VGA solution. I had no issues buying these with stock coolers as I had water blocks to use, however for people that are using stock cooler you will miss out on a lot of potential power as these cards would throttle to 830mhz from the 947mhz as they approached 94C. I am sure that a third party air cooler would help. I can run my cards 24/7 at 1100mhz core and 1350mhz memory. These cards are getting extremely expensive and had to find due to all the coin miners buying them... If you can get one, buy it, however at $529 I might just recommend an overclocked GTX 780 like the EVGA Classified instead.

Pros: Very powerful. - I wasn't expecting much coming from my previous GPU (GTX 580), but this card sure proved me wrong. There is no game that I cannot fully max right now. Very inexpensive for its performance. - Now I know $400 isn't exactly within everyone's budget, but in its price range, it's probably the best GPU you can get. It matches or beats a GTX 780 in most benchmarks for $100 less while coming extremely close to its bigger brother, the 290X, for $150 less. It makes the 290X look like something only AMD diehards would purchase. Looks nice - While the shroud is made of cheap plastic, I do like the whole "performance" look these Volcanic Island reference cards have. I know it's now the whole sleek and industrial look the current Kepler GPUs have, but I still love the look of it.

Cons: It does run quite hot (94C in my case), but that's nothing a decent aftermarket heatsink can't fix. While this may not be relevant anymore sometime in the future, the MSI cards cannot unlock to a 290X. In case you haven't heard, some reference Powercolor and XFX cards are apparently sleeping 290Xs waiting to be awoken. I'd recommend going for one of those if you want to take that risk, though the performance difference is so minor that it's honestly not worth it.

Overall Review: If you're looking to spend $500 on a GPU, I'd recommend picking up one of these instead along with an aftermarket cooler such as the Arctic Accelero Xtreme III, or the Gelid Icy Vision Rev. 2 (MAKE SURE IT'S NOT THE 7970 VERSION). Even with the added cost of the aftermarkets, it's still less than a GTX 780 while having the same performance or better. If you're not willing to get your hands dirty to install an aftermarket solution, wait until aftermarket GPUs hit the market. The MSI Gaming version of this GPU will more than likely be killer at OCing while running at much lower temps. Not as low as something like an Xtreme III, but definitely lower that the horrid stock heatsink. The stock cooling is actually MUCH quieter than I was expecting. The reviews had me expecting a jet engine, but it actually runs quieter than my GTX 580 (which was a reference card) under load. It's audible, yes, but it's far from making your ears bleed, especially in a closed case. All in all, this is an amazing GPU for the price, and if you can stand the temps or don't mind getting your hands dirty, I fully recommend picking one up. Otherwise, just wait until aftermarket GPUs hit the market.

Pros: This card is fast. I can play pretty much any game maxed out right now. The card has plenty of RAM to game at higher resolutions and a really fast memory bus that makes it easier to use AA in games. With all of the power of this card it is at a great price of $400. This card easily out does the GTX 780, especially overclocked, which leads me to the noise and heat. To me the card is not really that loud at all. Once I get sucked into a game I do not even notice the sound at all. And at the fan speed settings my card only goes up to about 70 degrees.

Overall Review: If you are looking for a card that is one of the most powerful single GPU cards out there, than the R9 290 is for you. And do not worry about the noise and temp it really is not as bad as many people have said.

Pros: This GPU is absolutely unbeatable at ~$400. All professional reviews put it within 5% of its big brother, the 290x. Its runs pretty much everything very well at 1920x1080.

Cons: If you are going to get a card like this one, make sure you have a SOLID PSU. Stick to reputable brands with lots of positive reviews. When you have components this expensive inside your computer, you don't want ok, you want great when it comes to the PSU. Also, a lot of people are complaining that it runs too hot and loud. I ran Unigine Heaven Benchmark on it with everything maxed at a stable 60fps, and I didn't notice any extra noise. This one comes with a ref cooler, so stay away from overclocking unless you really know what you are doing, it's plenty fast to run anything anyway.

Pros: Very powerful. This thing runs anything I have at near max or max settings so the card is worth the money for sure!

Cons: Reference cooler is crazy loud and barely cools this beast. Plan to buy a third party cooler to get the most out of this card or do any overclocking. It is so bad it's almost worth taking an egg away but the card is just too good to do so.

Overall Review: I haven't tried to unlock it yet but it seems some people are getting lucky unlocking these to a 290X...

Pros: Runs both Battlefield 4 and Call of Duty Ghosts at highest settings in 1080p no problem! Very quite!

Overall Review: Bought this to replace two GTX570's I had in SLI as I had gotten frustrated with dealing with SLI and such and having to wait for games to update SLI profiles and the like to function properly under SLI. I bought this as a replacement hoping I would at least get the same performance as my dual/SLI GTX570's, and low and behold it performs much faster than my old set up.. and a great bit quieter with half the amount of fans!

Pros: Quiet! All the reviews were saying this card would be super loud but it has been nothing but quiet for me. I'm upgrading from a 8800gt and that thing had a killer loud whine; this thing is super quiet. I thought I'd need an after market cooler from those reviews but no need now. Fraps shows me cap'd at 91fps never seen it go below 70 with all settings high in MP. High end card works with a 650watt PS.

Cons: When first getting into a ghosts MP game it lags for like 10 secs then goes away to awesome FPS. Might be a problem with the game still loading.

Overall Review: Just waiting on my BenQ XL2420TE to arrive so I can get the best experience out of this card. This card really shook up nvidias overpriced lineup. The 8800gt came out with the first Crysis and shook up the market and now I feel this card is the next 8800gt because it has done the same thing. Even though $400 is by no means affordable $600+ is ridiculous. So glad to see a card that costs almost half the price is knocking these "titans" down. :)

Overall Review: Lags my pc. Was incredibly over priced but I had no choice but to buy a cheaper grade card due to how expensive all the others are atm. Don't buy this please.