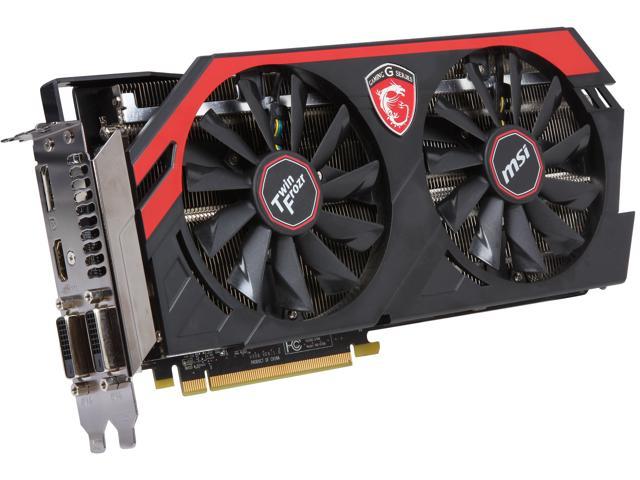 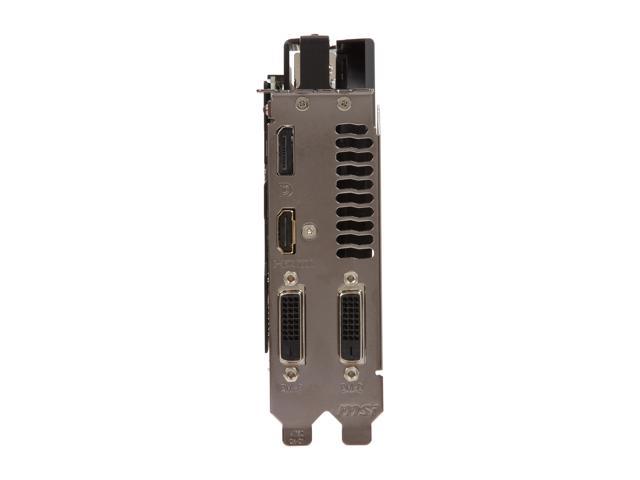 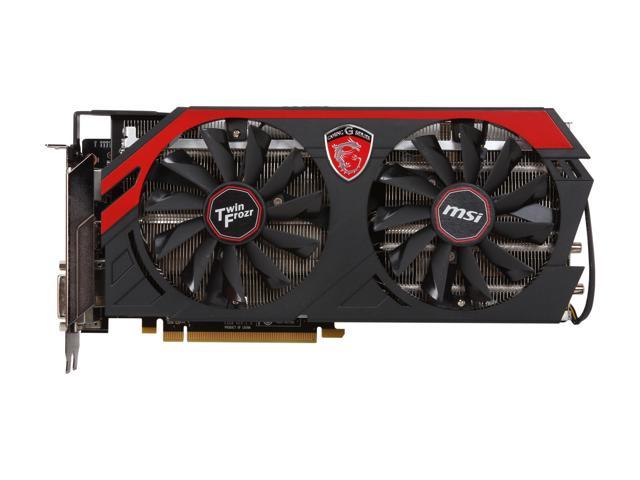 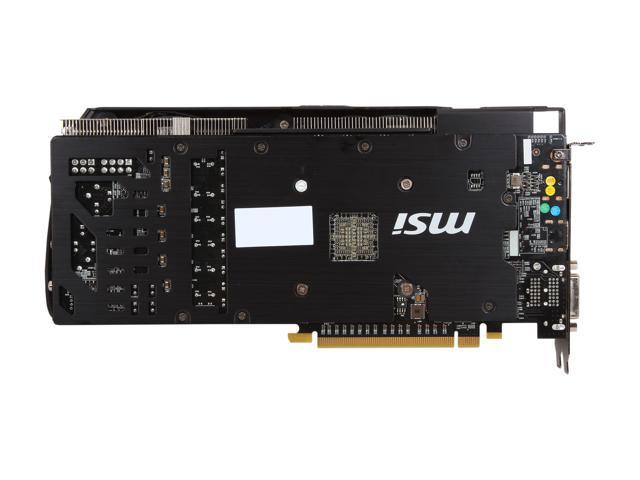 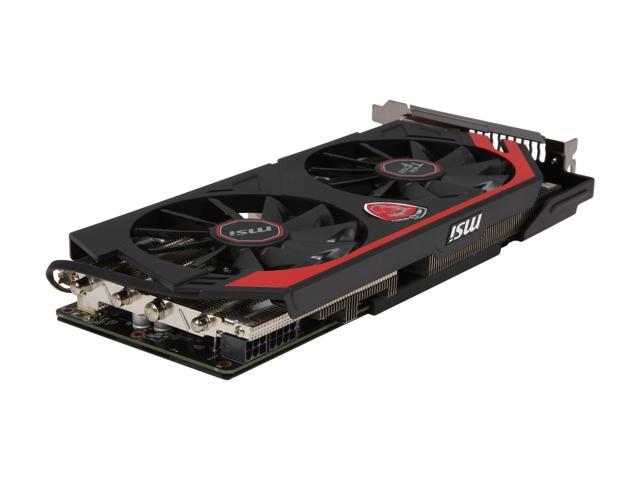 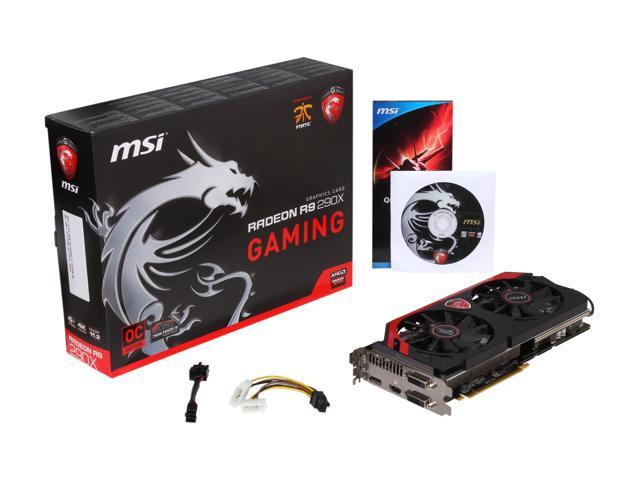 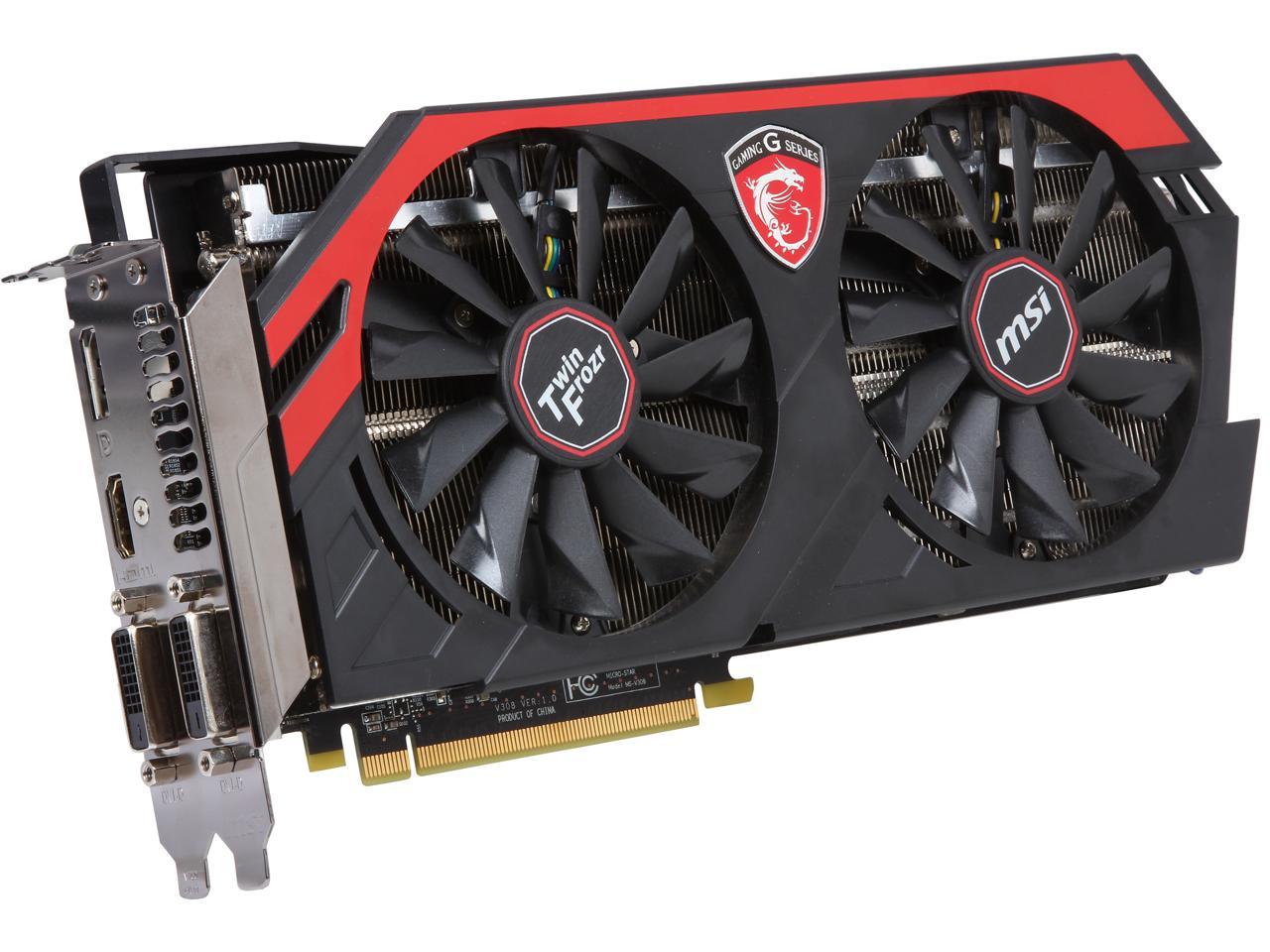 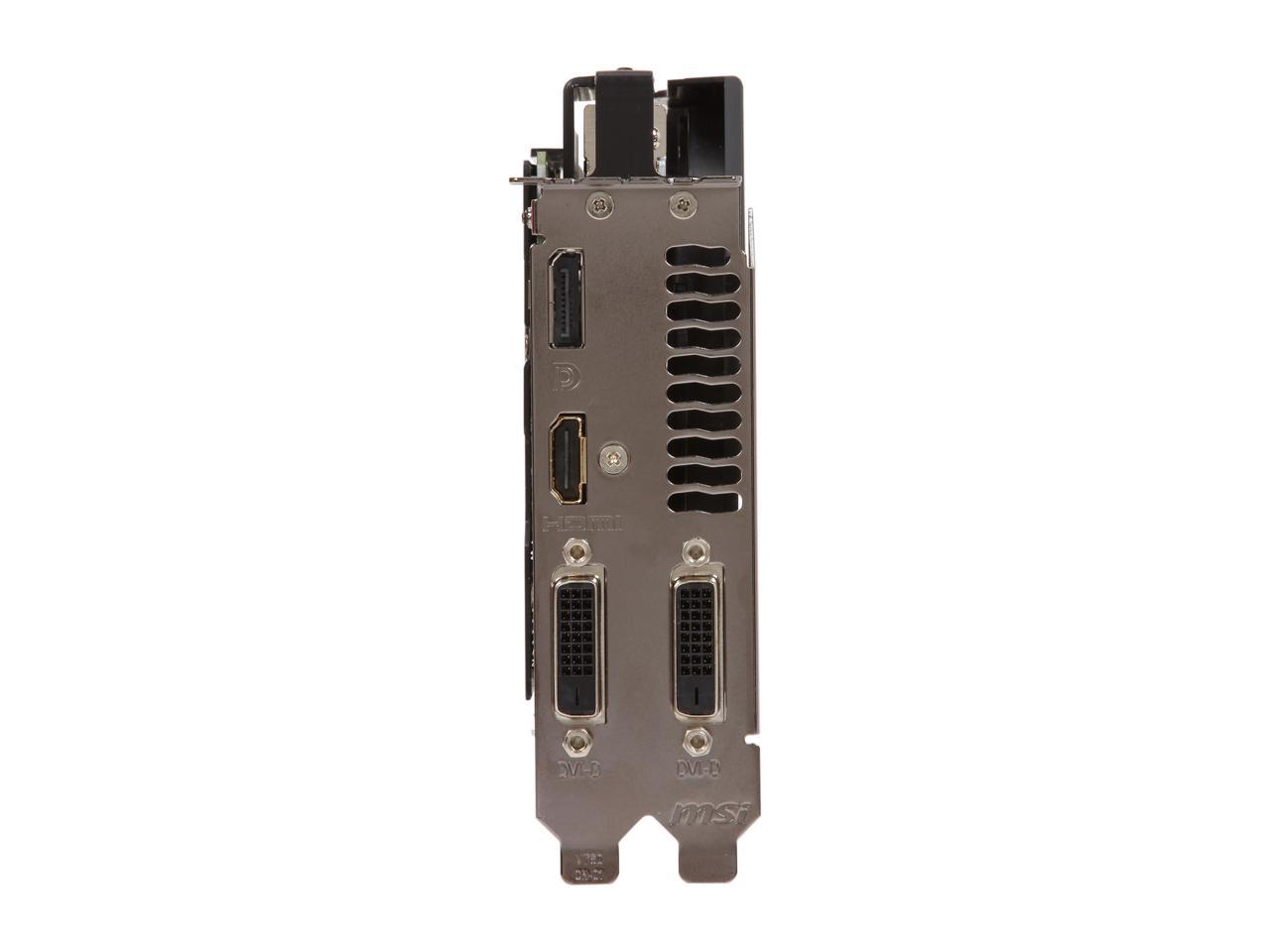 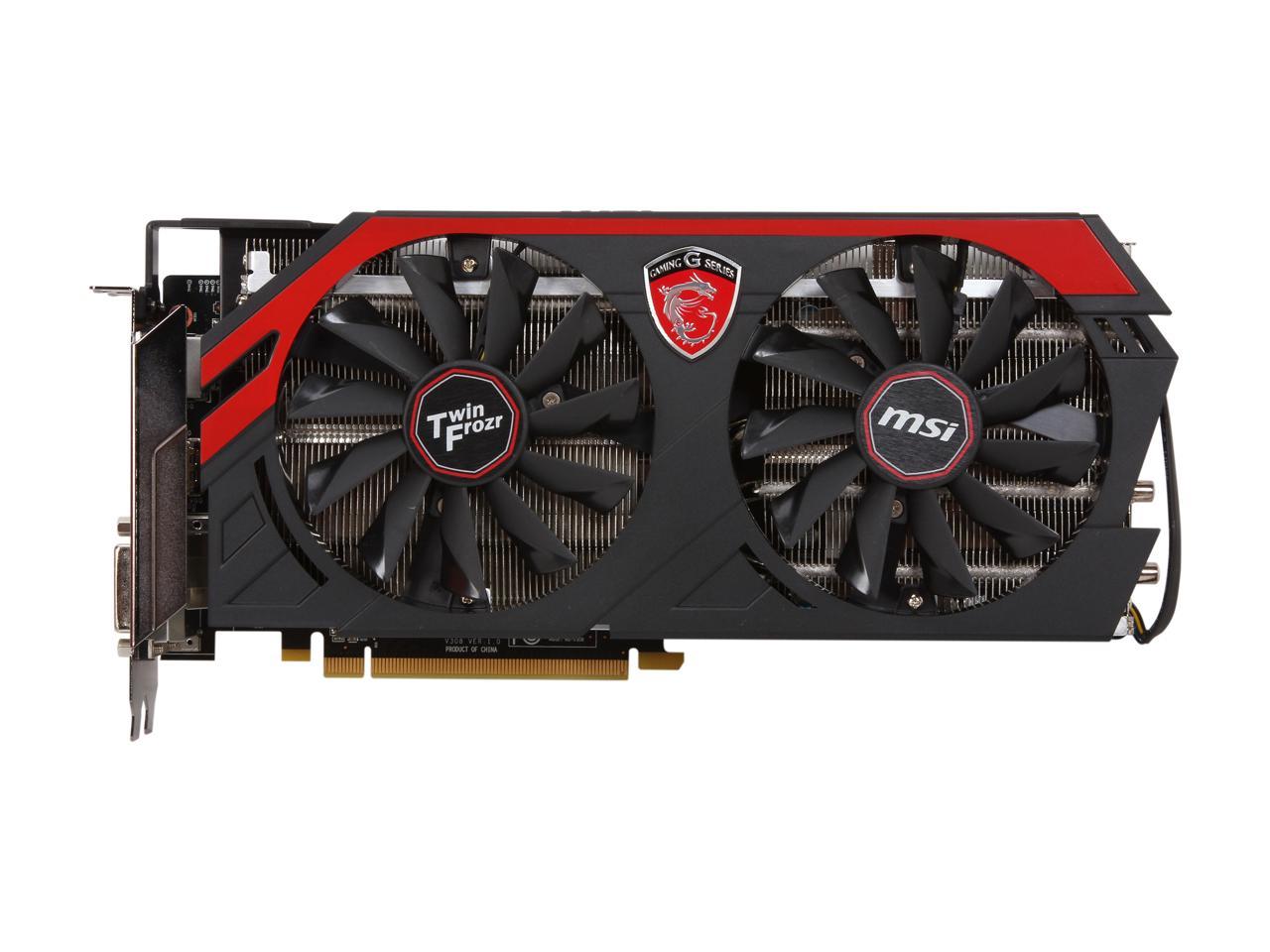 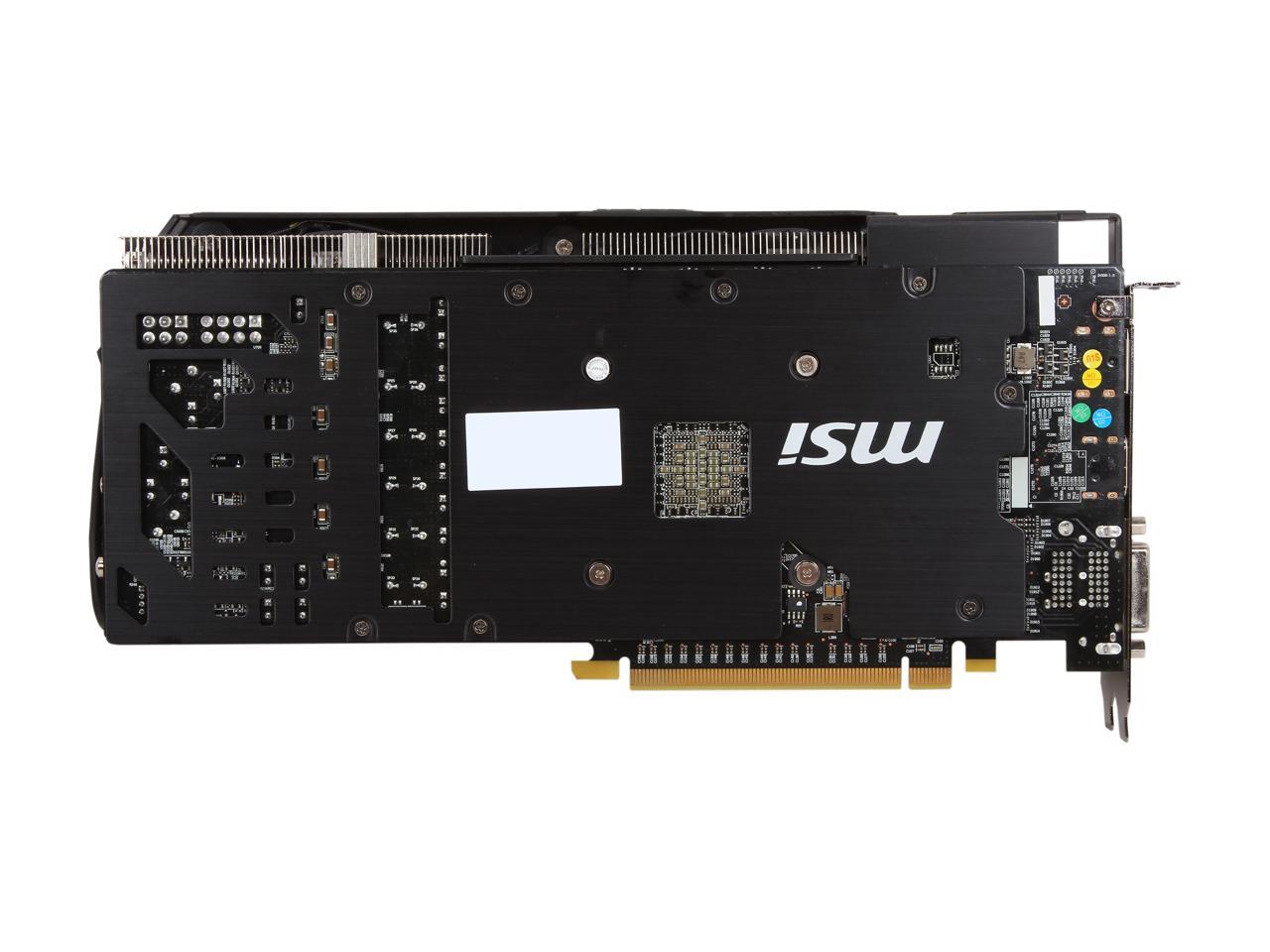 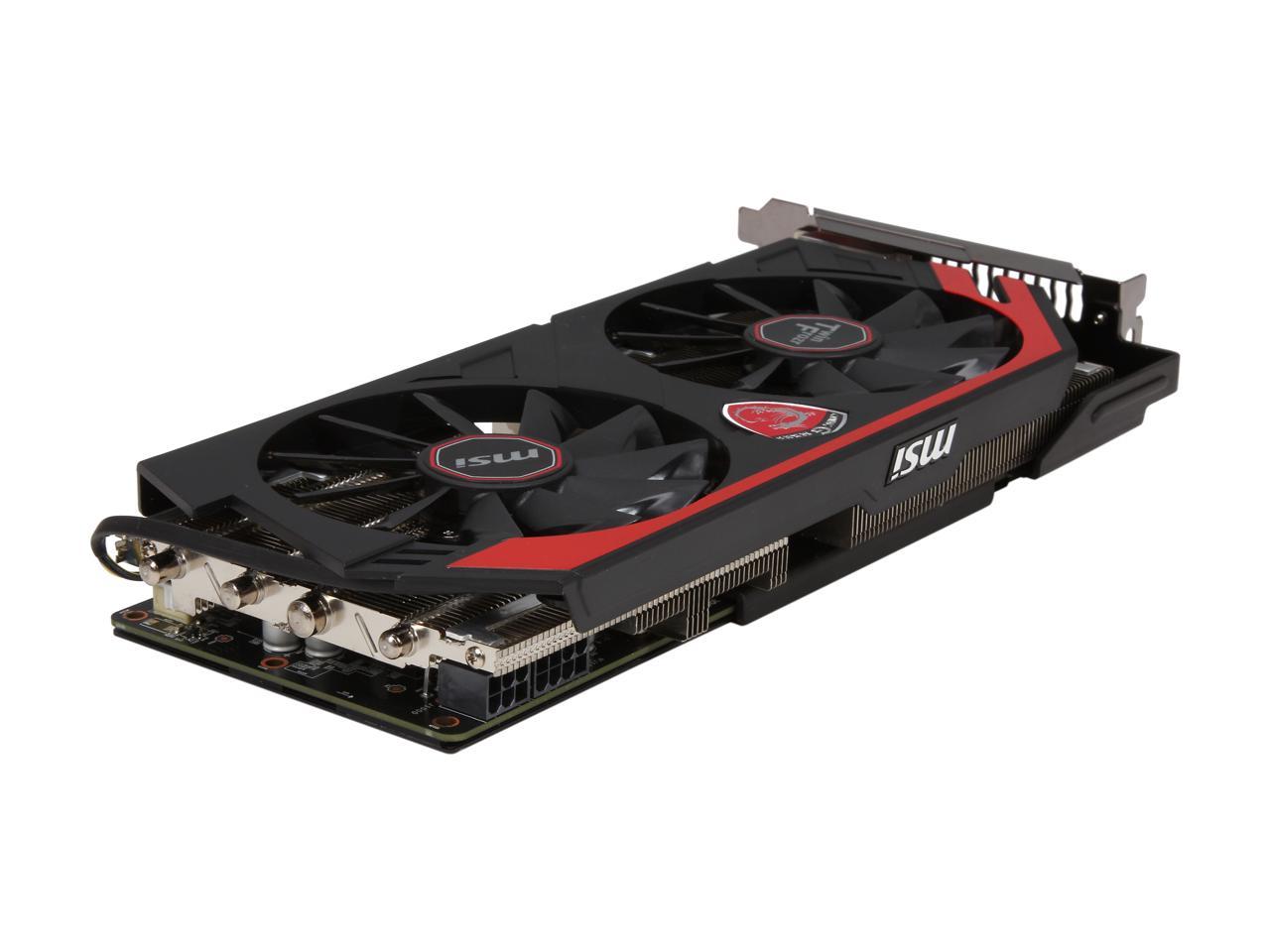 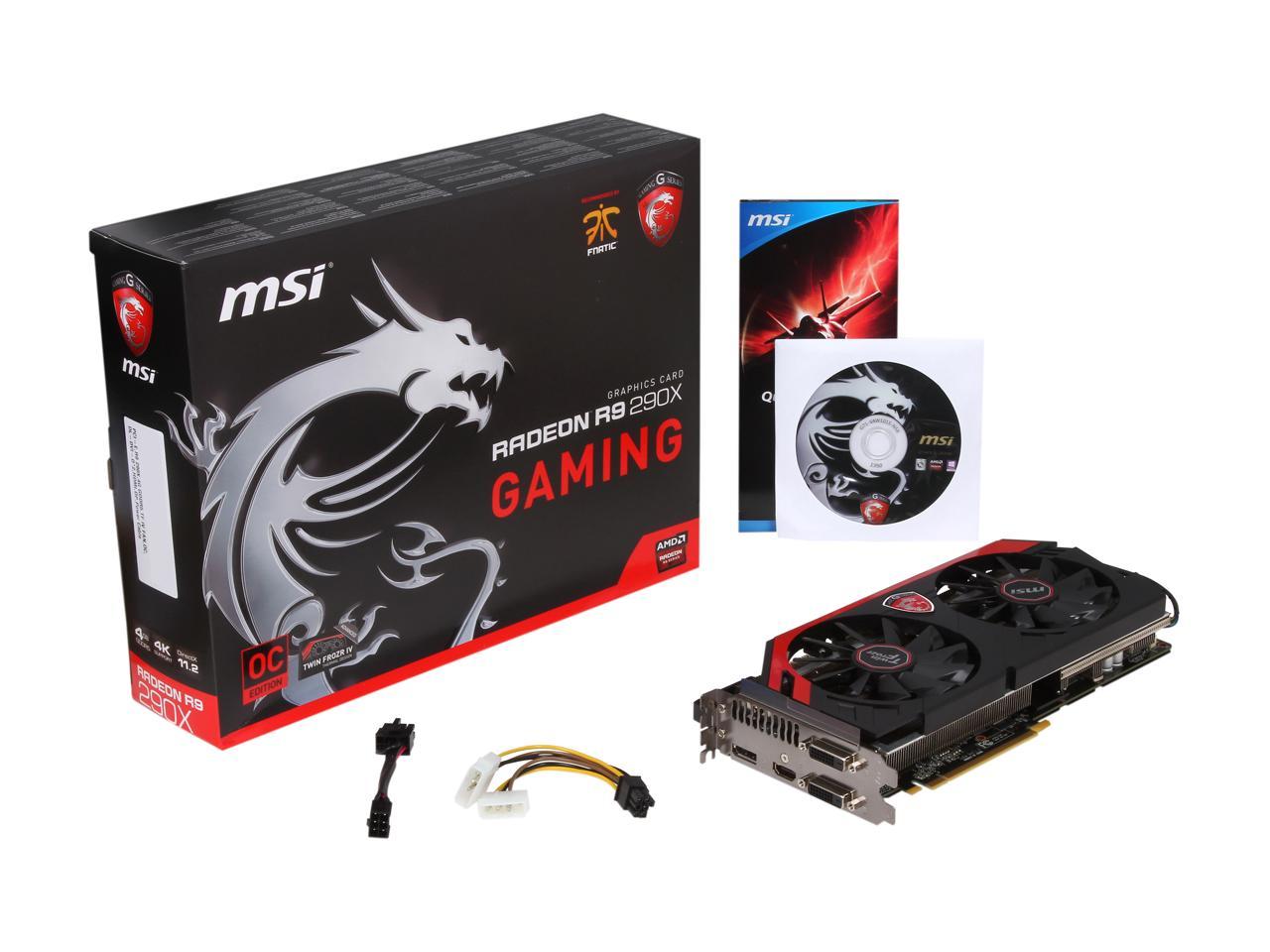 Now You're Gaming With MSI A graphics card is the single most important element for more FPS. As gamers, we understand that not just any graphics card "will do". That's why we bring you the best of the best. We don't want to bug you with noise and heat, but we DO want to give you more performance. With MSI GAMING series graphics cards you get just that. MSI's Twin Frozr has been the industry defining graphics card cooler. The first Twin Frozr kicked off the dual-fan trend and today MSI stays true to its dual-fan dual-slot design where others have to resort to less effective means.

The other part that the Twin Frozr cooler uses is a large Aluminium fin grid array that provides a huge amount of surface area for cooling. Heat from the GPU is transferred to the fin grid array by virtue of heat pipes with MSI's special SuperPipe technology. SuperPipes transfer heat twice as fast as regular heat pipes enabling an MSI Gaming graphics card to stay cooler than the competition's.

Furthermore, MSI provides all new Airflow Control technology on the Twin Frozr. This new thermal technology leads air to the heat pipe by a special deflector on the heatsink, so it can direct more air to heat pipes directly. In addition, this exclusive heatsink design increases the area of the heatsink so as to increase the efficiency of heat dissipation.

With their aluminum core design, solid cap's have been a staple in high-end mainboard designs and provide lower Equivalent Series Resistance (ESR) as well as an over-10-year lifespan.

A Hi-C Cap is a very small but super-efficient capacitor. Besides ensuring enough spacing around a CPU socket to install large coolers, it also allows for 93% energy efficiency. Thanks to Hi-C CAP's, MSI mainboards are the most energy efficient on the market.

It's a new generation, form-in-one choke, which doesn't generate vibration noise under heavy loading & provides 37.5% higher current output compared with a traditional ring choke. It's very important when your GPU is overclocked or under high loads, since it requires even more electricity - provided by this component. A built-in screen and video capturing tool named Predator captures your screen as still images or videos with the push of a button and allows you to capture and record your coolest, goofiest, and most awesome gaming moments on your PC!

MSI Afterburner has quickly become the favorite overclocking software for media, overclockers, and end-users. Because of its simple interface, it's easy to learn, but it packs a lot of powerful features like an integrated benchmark utility called Kombustor that can check your system performance in benchmarking mode, or run as a stability test.

Don't speak English? No problem: MSI Afterburner is translated in many languages including Russian, Spanish, Chinese and Korean! Not satisfied with the looks? Just change to one of the many different skins or create one yourself with ease!

Even better, you can run Afterburner straight from your smartphone! Download the MSI Afterburner App from Google Play or the Apple store and start overclocking. Cons: * Mediocre core overclock ability on my specific card (Never a given though) * Nothing else for the $260 I got the card for after Rebate and Gift Card

16 out of 17 people found this review helpful. Did you?
Nathan R.
Ownership: 1 week to 1 month

Cons: Ordered 3, had to return 1. 2 of them stay cool, the third would overheat. Can only use a single card for quiet operation. Two cards will create too much heat within the case and then everything gets noisy again dealing with it. Three cards simply don't work. They get too hot, and are too close together to cool probably. For 3-Way Crossfire stick with the reference design or use water cooling.

Overall Review: Great card for gaming and pretty good for mining. Although they can be quite touchy in getting the config right for these cards. For mining though, they are better than the Asus Direct CU II cards. Those only go about 600 khash.

Pros: Obviously the 290X line needs some extra cooling. This is a well designed / built entry with MSIs upgraded components. I've been running this for several months now without a problem. Driver support is lame but this review is about the card. Temps never go over 70 degrees after hours of full load sim racing and FarCry3.

Cons: Cost, I paid full price when it came out and only now are the prices dropping (good for you, bad for me).

Cons: Can get hot if you don't have a well ventilated case

Pros: Runs the games I am currently playing on max settings smoothly(no stutter) at 1080p with decent framerates. FarCry 4, BF 4, and Crysis 3, which I had but never played before. I am using the fairly new Omega drivers. from AMD.

Cons: The gaming app does not work correctly for me. It would not go from 1030mhz to 1040 mhz. I checked the config file and 1040mhz was not even in the profile. I could not add it to the profile. This was the gaming app on the disk . The latest from MSI would not even load. Kept getting does not support this application error.

Overall Review: I don't think 10mhz would make much of a difference anyways. This card runs fine at 1030mhz which is the default setting at load. Temps are reasonable 74c was the max I recorded, in a warm room. That was while playing Crysis 3. Max was 65c playing BF 4 MSI afterburner works fine. I am using the newest version. Just using it for framerate and temp monitoring, though I'm sure at some point I will record some gameplay. I have no intention on overclocking this card. I may however buy a second one for crossfire at a later date. At this point I still give it 5 eggs as I really don't care that the gaming app did not work for me correctly. FX 8350@4.62ghz/ H80i cooling Sabertooth 990fx r2.0 mb 4x2 for 8gb Gskill 1866 memory MSI R9 290x gaming 4g Hauppauge -1250 tv tuner 240gb M500 ssd 500gb Caviar blue sata Corsair 750w bronze modular Storm Scout 2 case

Pros: Price - You get a high end card (a tad faster then the 780 a tad slower then the 780Ti) for a lower price point . Performance. These cards really run what ever I throw at them on max settings with no complaints 512 Bit memory bus. This isn't talked about alot but they have a really wide bus that will make an impact at 4k resolution..

Cons: Power hungry - peak power draw is about 300w per card. So you need a beefy PSU

Overall Review: I picked up 2 of these for my new build. Was looking at 2 of these vs 2 GTX 980s. Decided on these mostly because of Mantle and the 512bit bus for the 4k gaming. Really really happy with them.

Pros: This card is great. I just bought it for my new gaming rig and I'm glad I did. Runs all my games on ultra at 100+ fps. Stays cool and fans are almost silent.

Cons: Expensive. Makes weird humming noise when I play games. Not too big of a deal, though.

Overall Review: To the people who are saying that games crash on startup, you probably need a better power supply. This card chews up a lot of power.

Pros: I bought this for anew build. it has worked flawlessly ever since. It had been running warm, mainly because i didn;t have enough air coming in or exhusting from my Corsair 750D Case. I have it runing at 1080P Res even thoight it can go higher. Monitors at the max res are very expensive.