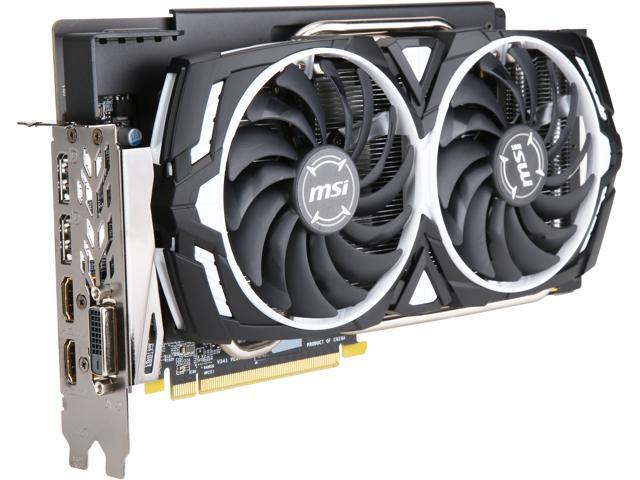 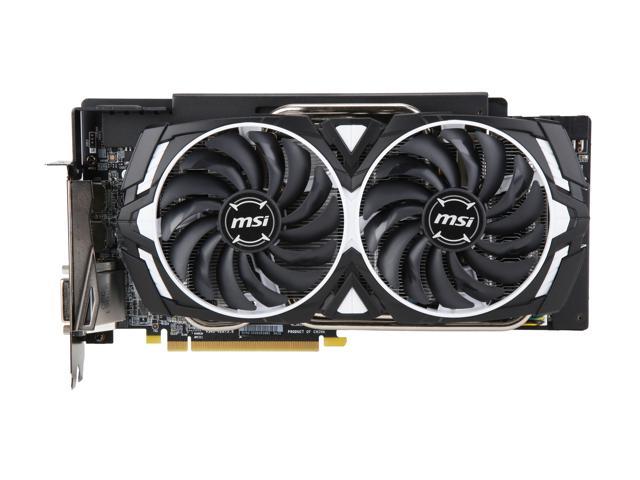 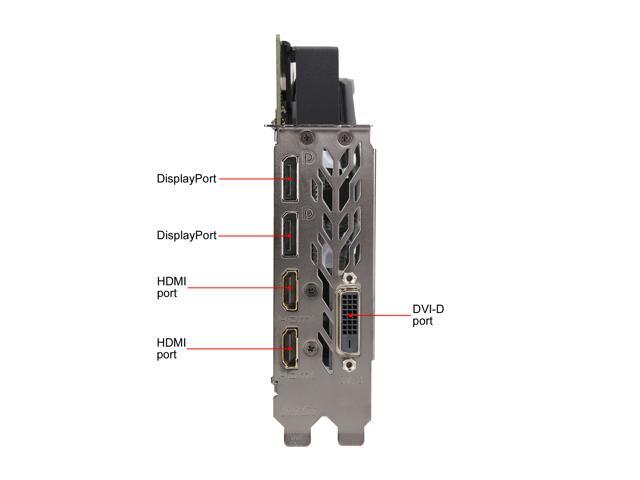 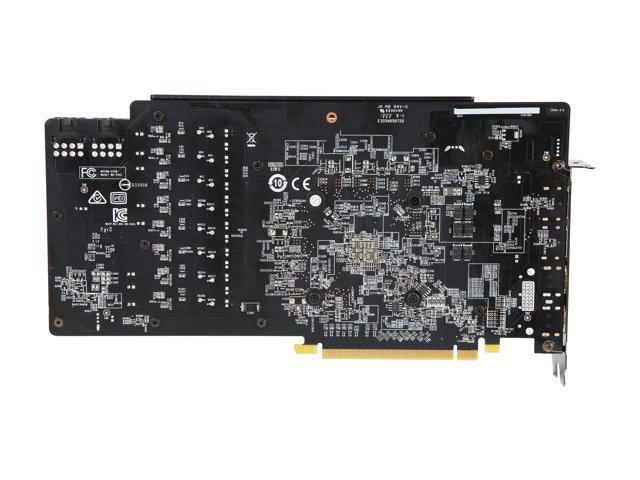 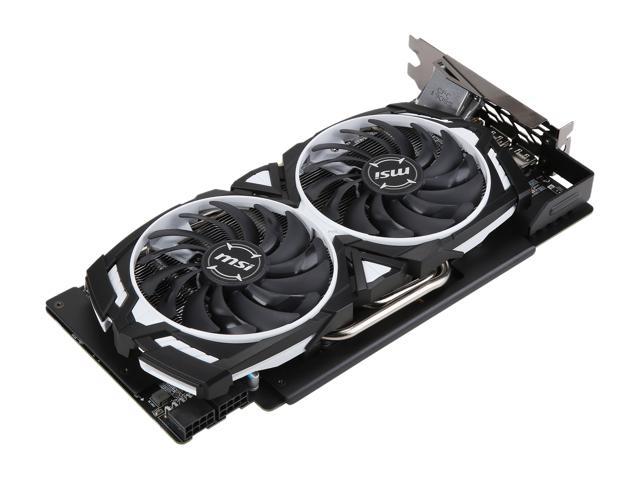 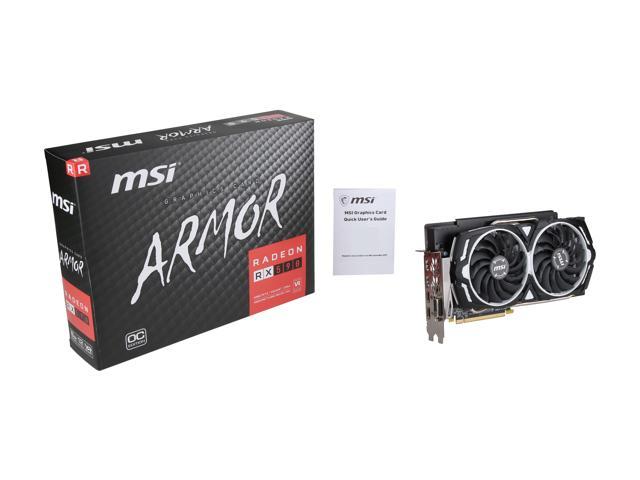 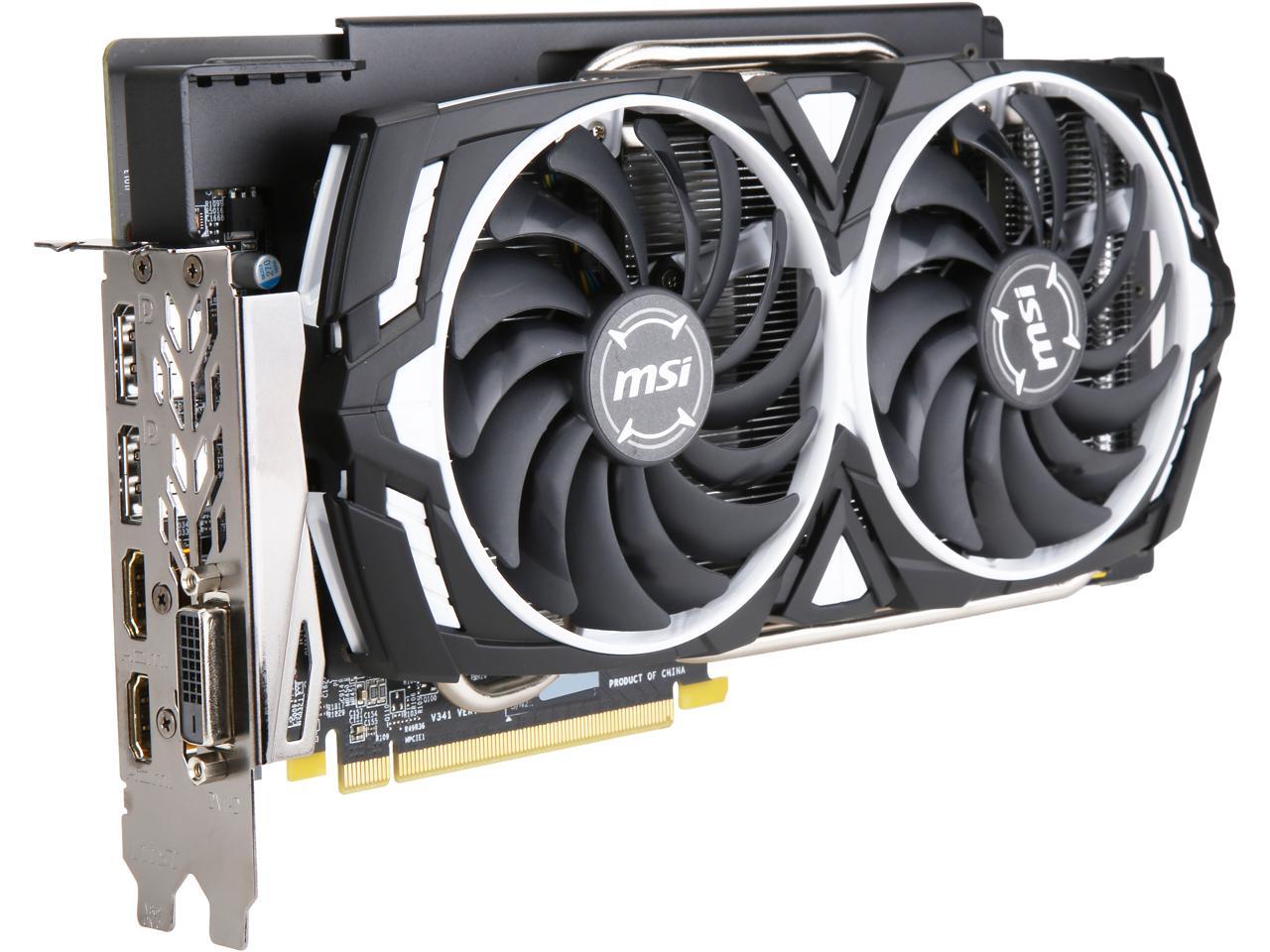 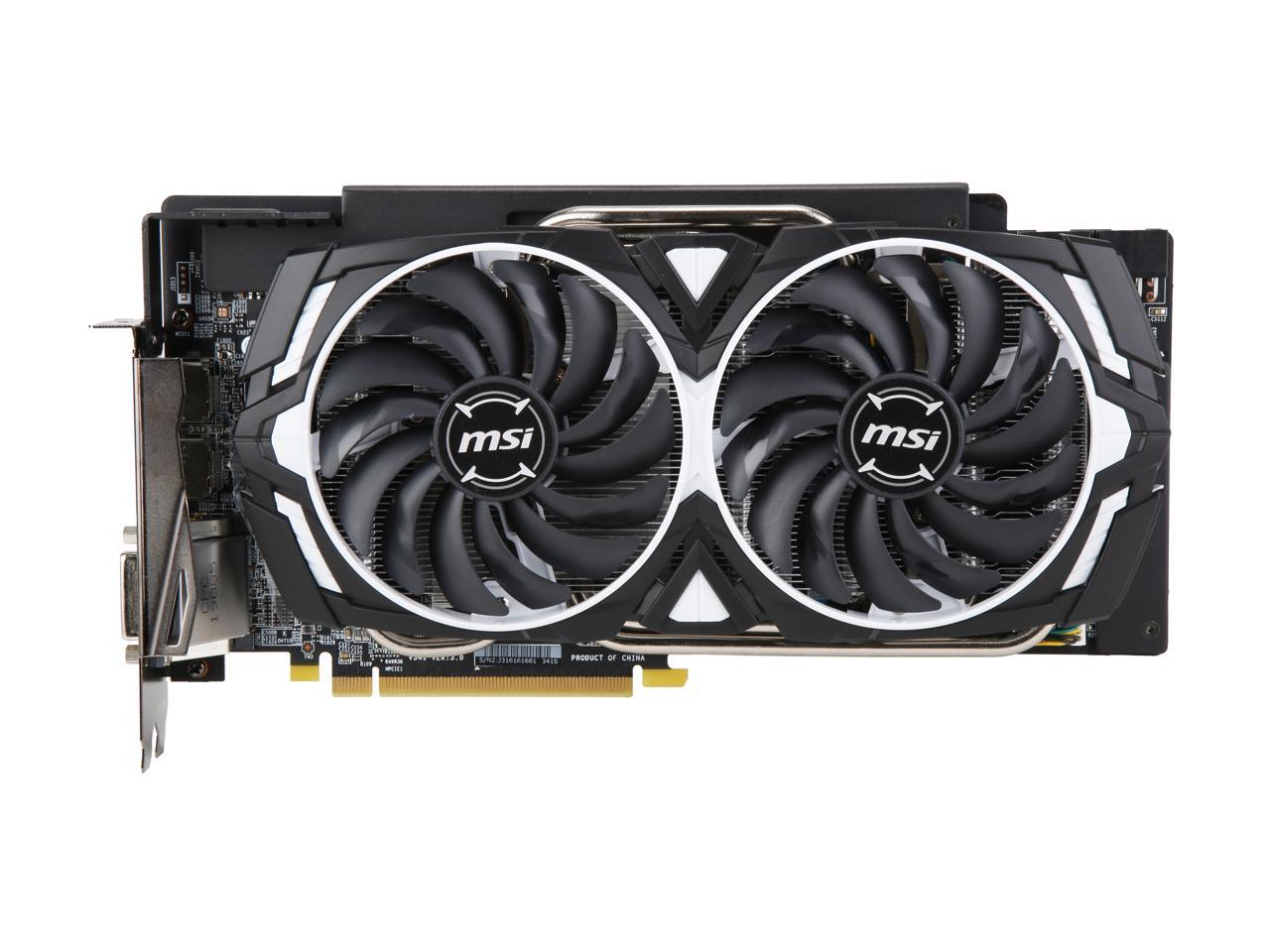 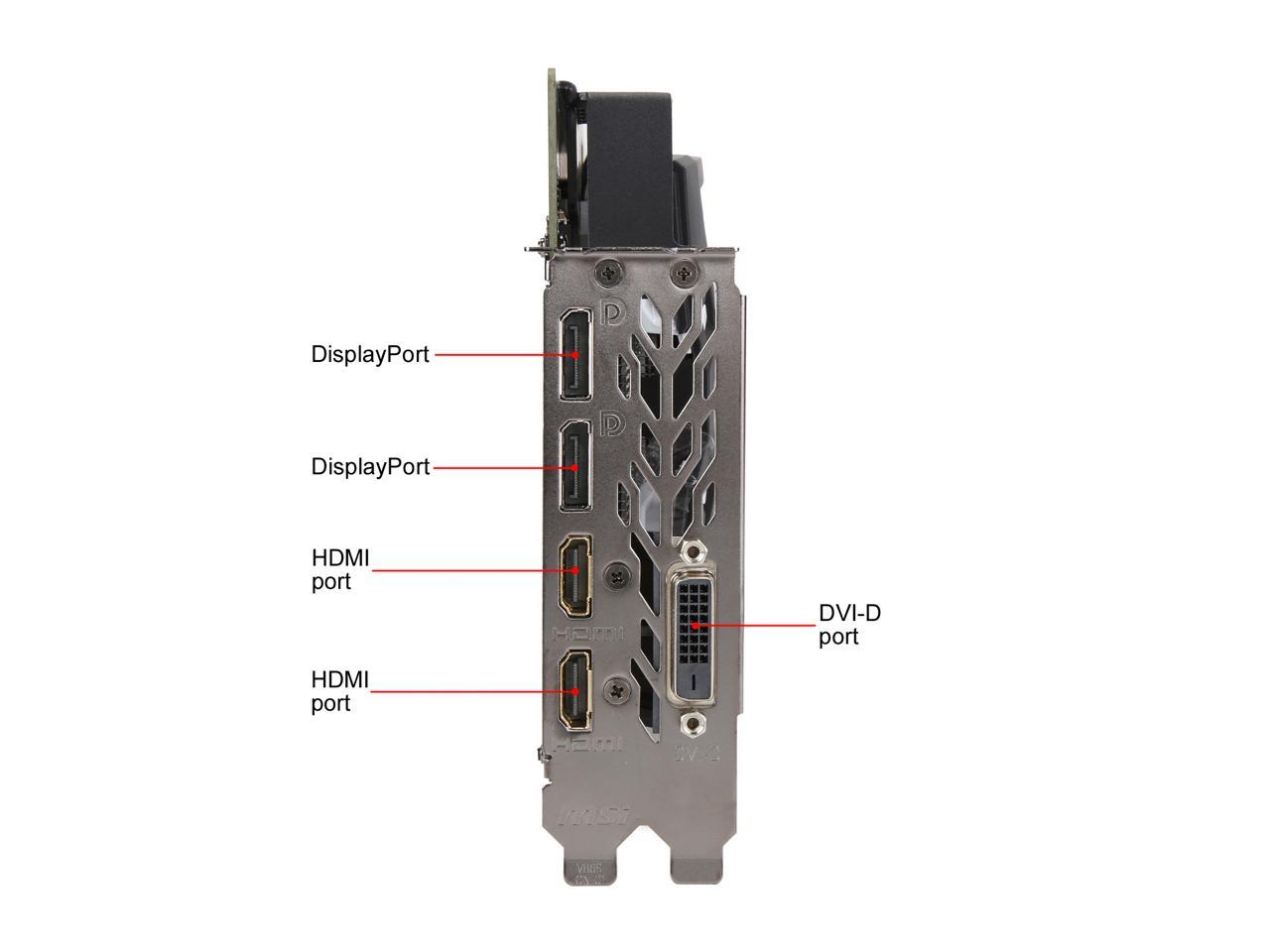 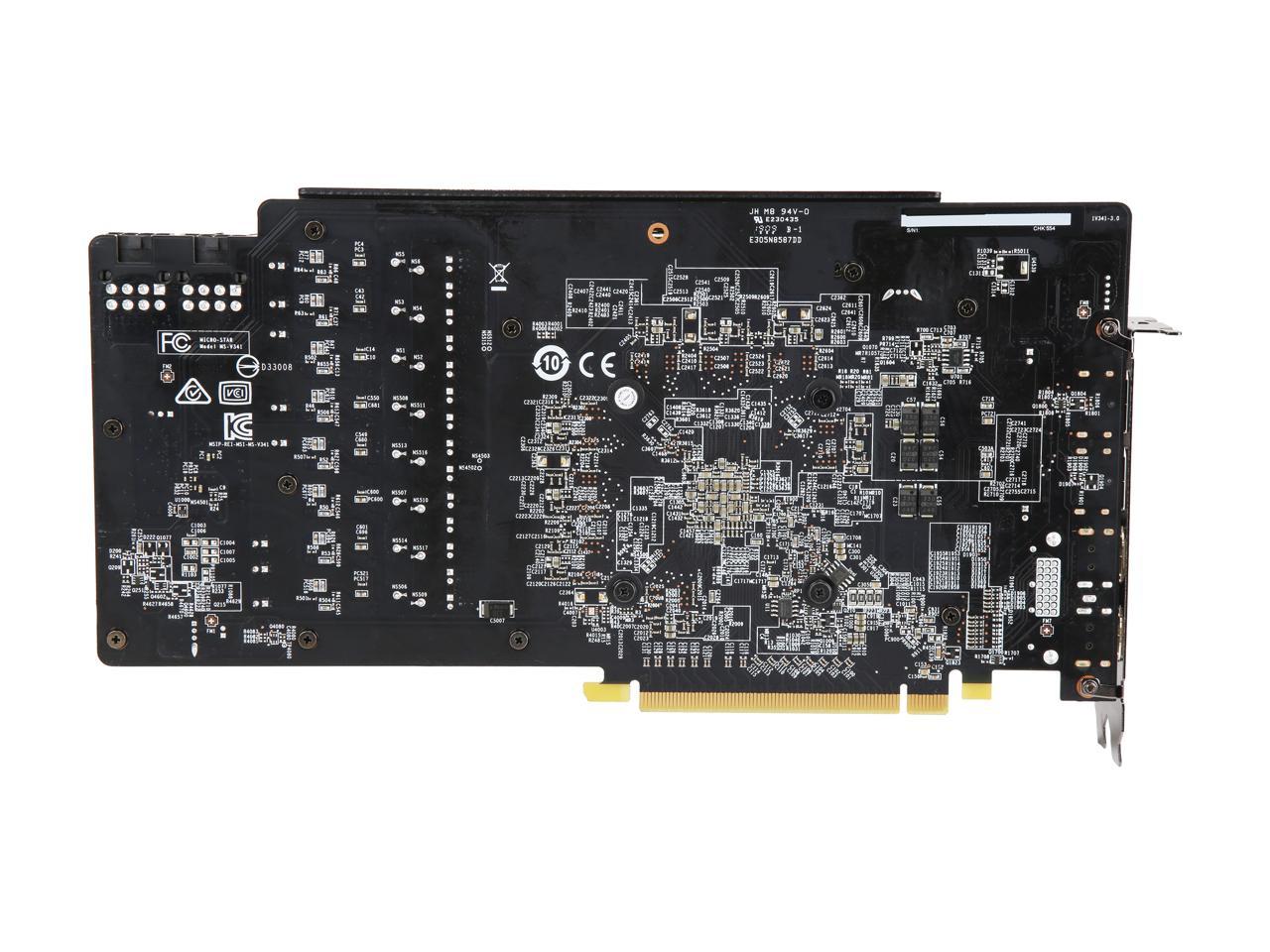 Pros: works great just adjusted the fan curve a bit higher still quiet running all my games at 60 fps and way above for some

Cons: non so far sometimes i get frame rate drops on world of tanks not sure why might be something on my end running in the backround

Overall Review: nothing wrong at all with my card i didnt mind the games that came with it haven't played wwz yet but might soon this is my first good graphics card i have ever owned i was upgrading from a gt 1030 from evga then went to msi because of my motherboard running so well so thought why not? I will buy from msi again when I switch to amd for my cpu because i dont like intels gimmicks and kinda felt trapped for spending soo much sor a core i3 8100 thats not a k series so i cant overclock it unless i paid for the same price as a non k i5 its kinda stupid if you ask me

2 out of 2 people found this review helpful. Did you?
Manufacturer Response:
Dear Joshua, Thank you for sharing your experience with the RX 590 ARMOR OC! Have fun gaming with the card! If you ever require technical assistance, please feel free to contact our technical support department directly at 626.271.1004 from M to F, 9am to 6pm Pacific Standard Time. Thanks for choosing MSI! Best Regards, MSI Review Team
Bailey B.
Ownership: 1 week to 1 month
Verified Owner
Poor Benchmark Scores7/16/2019 12:46:14 AM

Cons: -Benchmark scores were poor. -Limited CPU potential. -Big and was surprisingly difficult to install in my mid tower.

Overall Review: I previously owned an EVGA 1050ti, and its benchmark scores were quite a bit higher than this RX 590 that I purchased. Drivers were updated, old Nvidia ones removed, and settings optimized and changed several times to try and get the best scores, and yet they still were poor. On Cinebench R15, over all my testing, this RX 590 yielded an average Open GL score of 95, whereas my 1050ti yields an average of 115. This disappointed me, as the RX 590 is generally said to be a 100% increase in performance from the average 1050ti. After further testing, I discovered that when working at full GPU usage, this RX 590 worked like a charm. On Fortnite (great game for benchmarking,) the RX 590 held a solid 165 fps with base clock speeds on high graphics settings. My 1050ti could only hold about 90, on average. Despite its great performance when using it's full potential, most of the games I play do NOT require full GPU output, for example, in Minecraft, this card couldn't hold 160 fps, and dropped quite frequently, whereas the 1050ti can easily hold 300 fps. Finally, regarding the RX 590, my CPU's (Ryzen 5 2600x at base clock speeds) performance when paired with it decreased by about 10% from my previous card, according to various benchmarks. They returned back to normal once I reinstalled the 1050ti. Although the issues with the card may have software related, I see no excuse for such low benchmark scores. I returned the card after about a week. My advice to anyone looking to purchase this card is to just understand that you may be taking a risk, as AMD is not as reliable or looked upon as highly as Nvidia. If the issue were somehow software related, it was not something that I was able to resolve in hours of testing and research. If it were hardware related, I would hope that other MSI RX 590s don't have these issues, as I know MSI is a highly regarded brand in the tech world. Thankfully customer service was helpful and I was able to get a full refund (in store credit) and no restocking fee, as the card was labeled as "defective."

Did you find this review helpful?
Manufacturer Response:
Dear Bailey, Thank you for sharing your experience with the RX 590 ARMOR. We are sorry to hear you are experiencing with the performance of the card. If you have any further questions regarding this product or have any suggestions for improvement for us, please do not hesitate to contact us directly at usrma@msi.com and we will be more than happy to assist you. If you would like further technical assistance, please feel free to contact our technical support department directly at 626.271.1004 from M to F, 9am to 6pm Pacific Standard Time. Thanks for choosing MSI! Best Regards, MSI Review Team | JM07172019005 | usreview@msi.com
Everett S.
Ownership: 1 month to 1 year
Verified Owner
Returned for another card.7/14/2019 11:26:13 PM

Pros: Works great after a broken card return that was approved and shipped fast, thanks Newegg.

Did you find this review helpful?
Manufacturer Response:
Dear Valued Customer, Thank you for sharing your experience with the MSI product! If you ever require technical assistance or warranty support, please feel free to contact our technical support department directly at 626.271.1004 from M to F, 9am to 6pm Pacific Standard Time. Thanks for choosing MSI! Best Regards, MSI Review Team