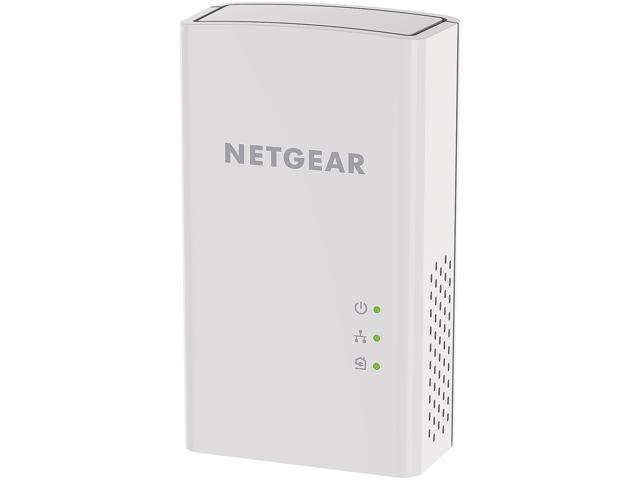 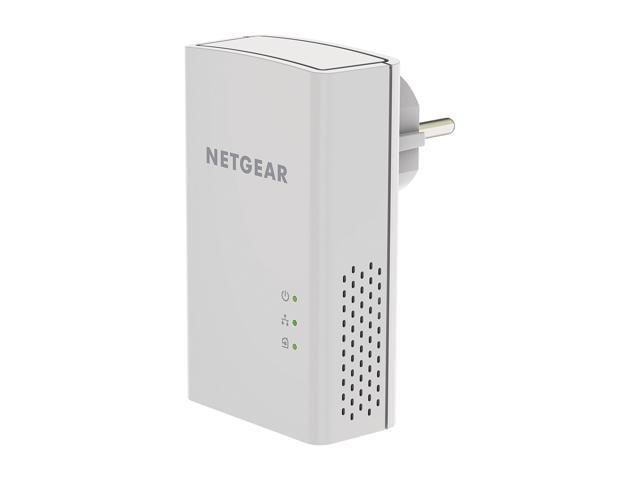 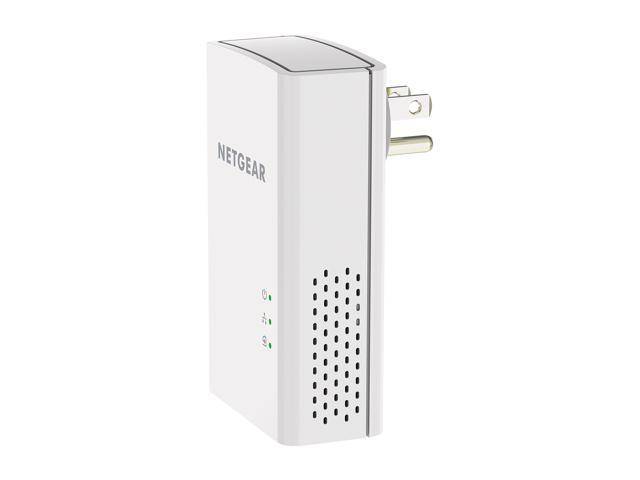 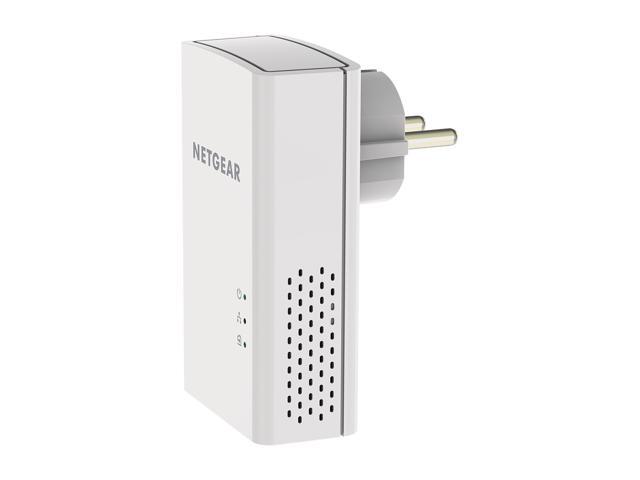 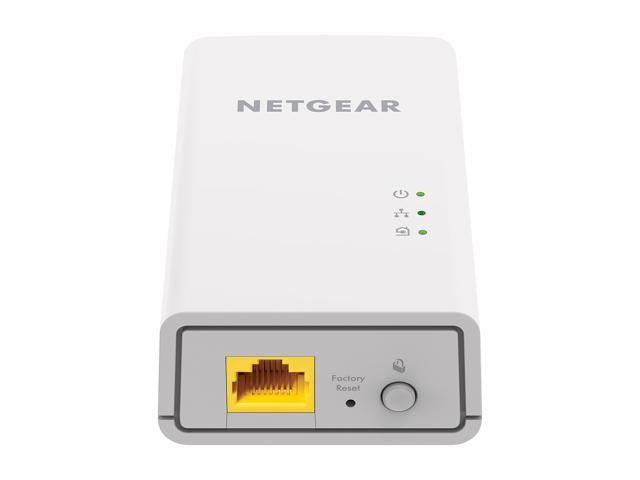 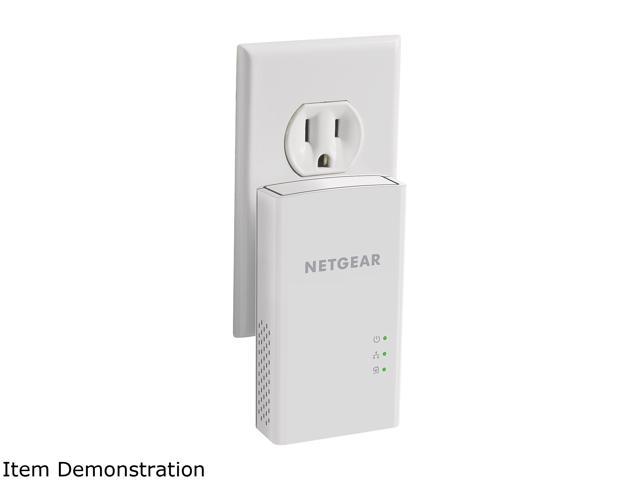 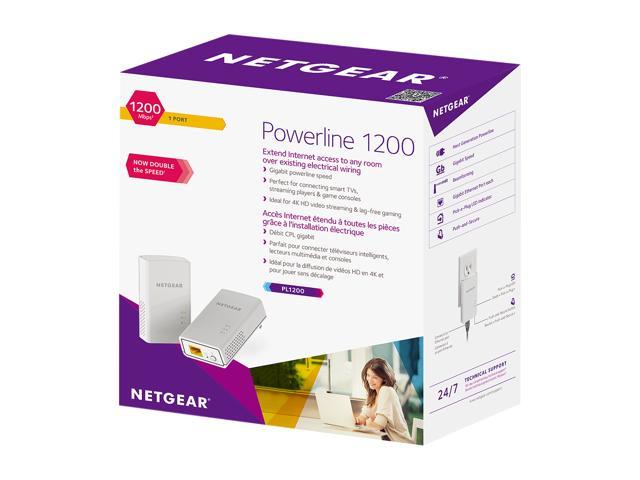 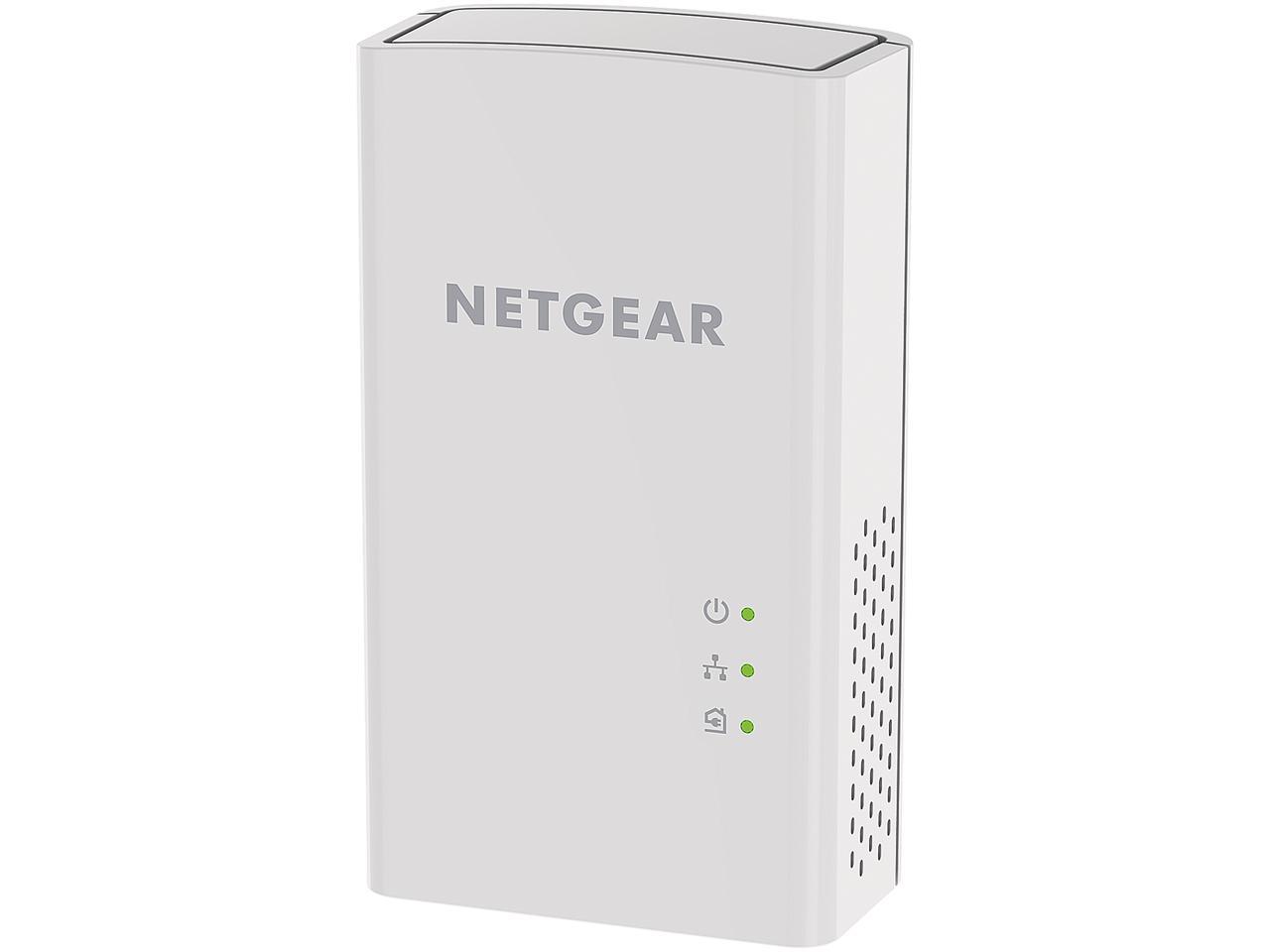 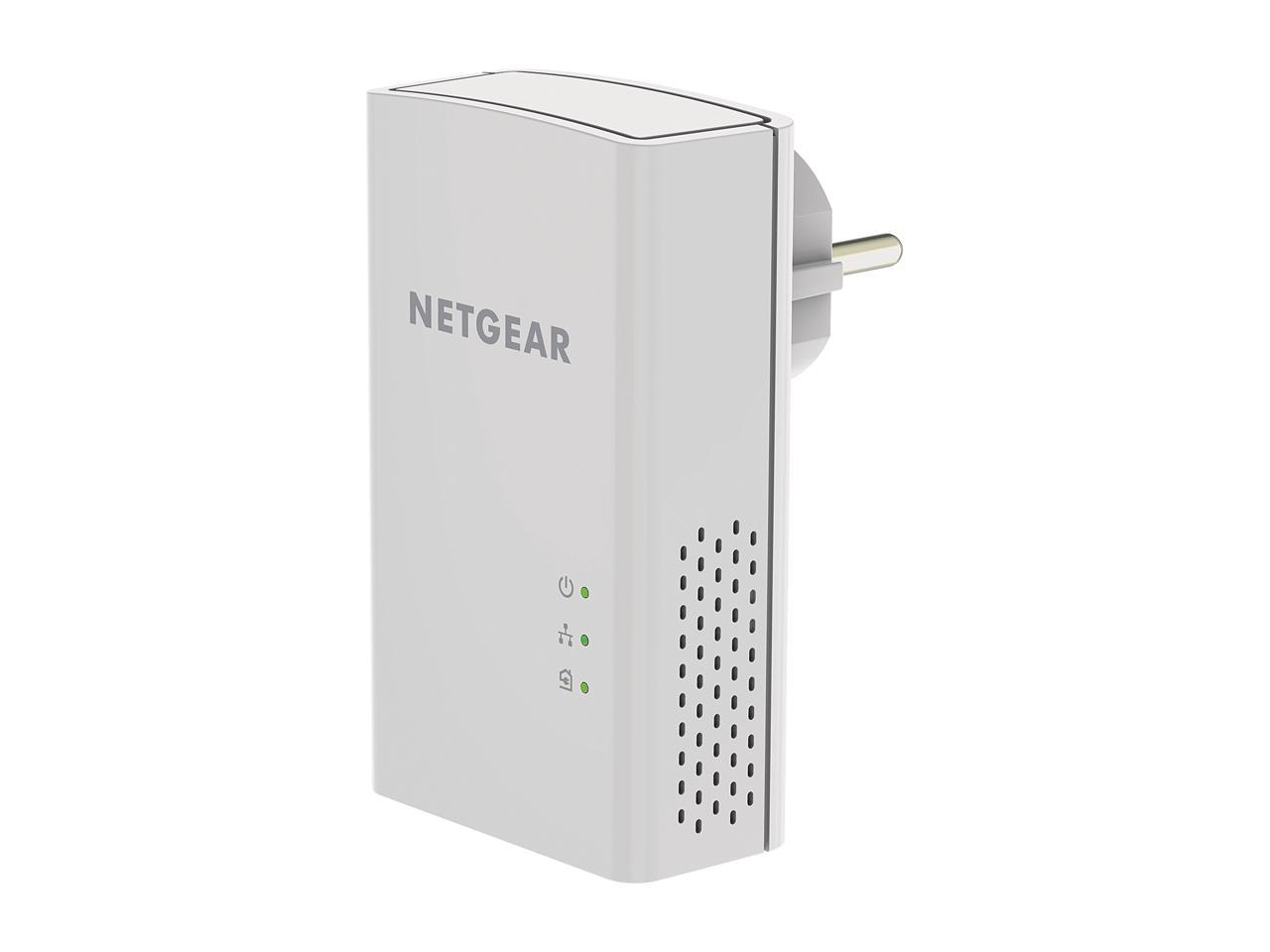 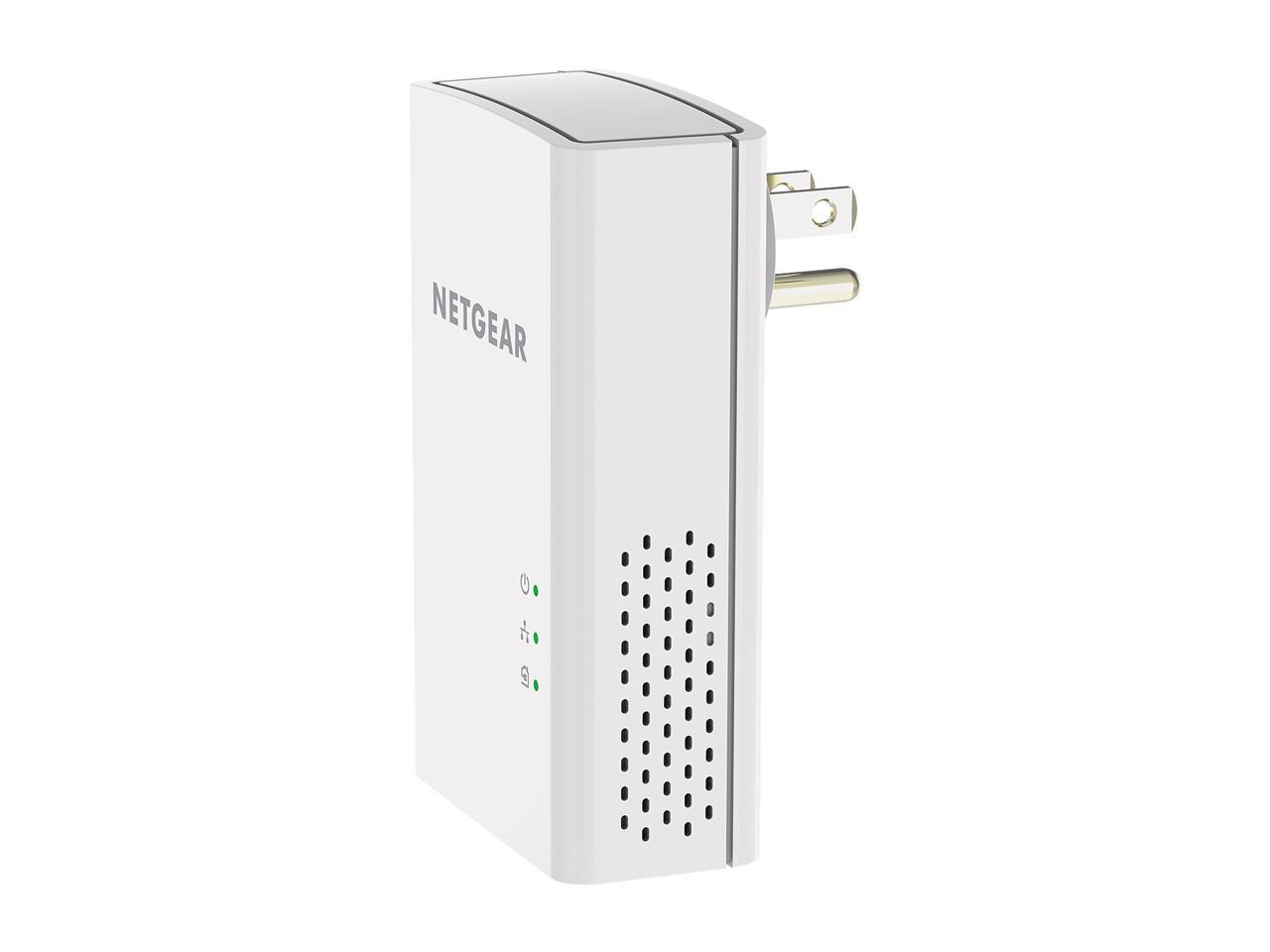 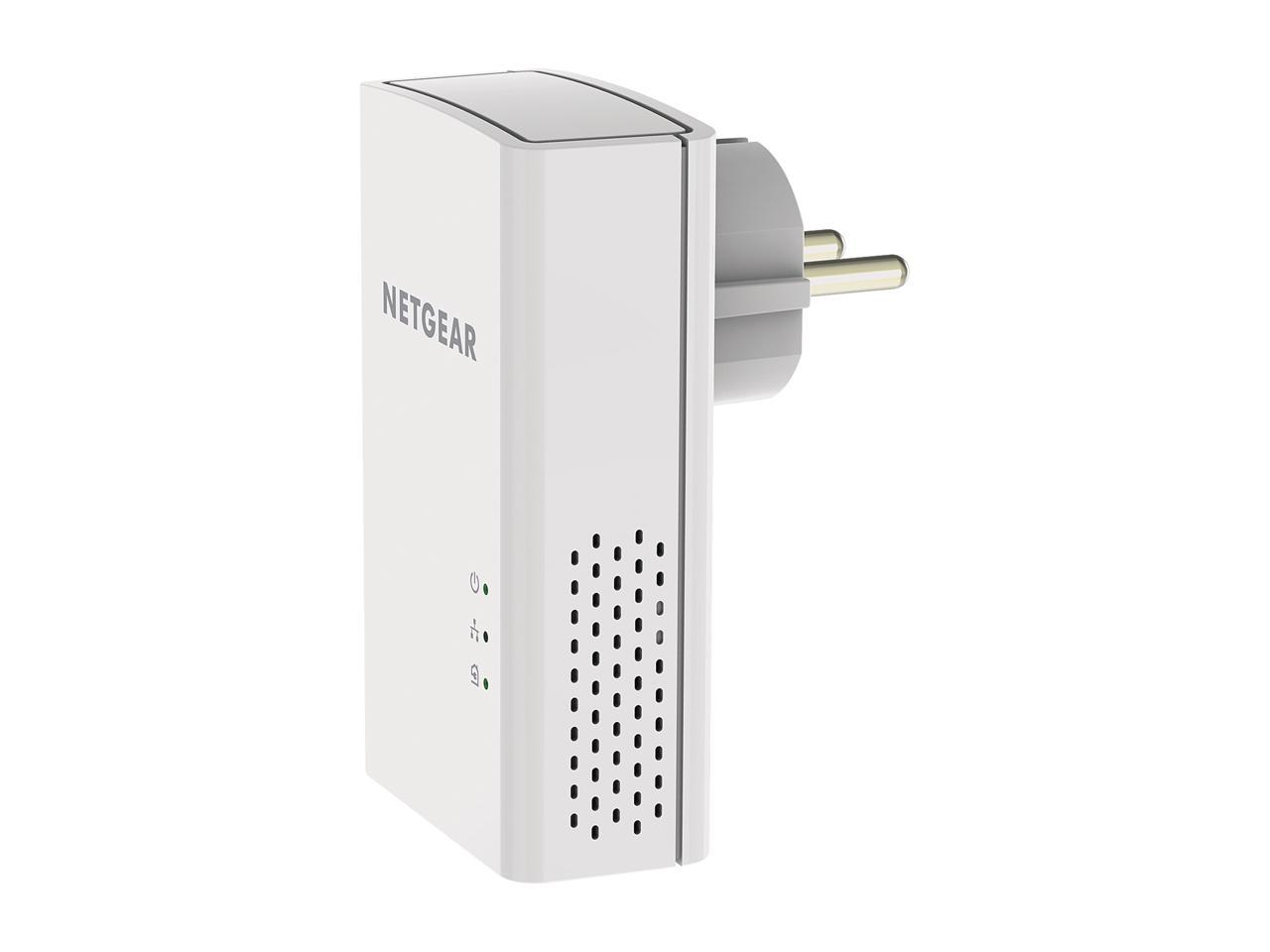 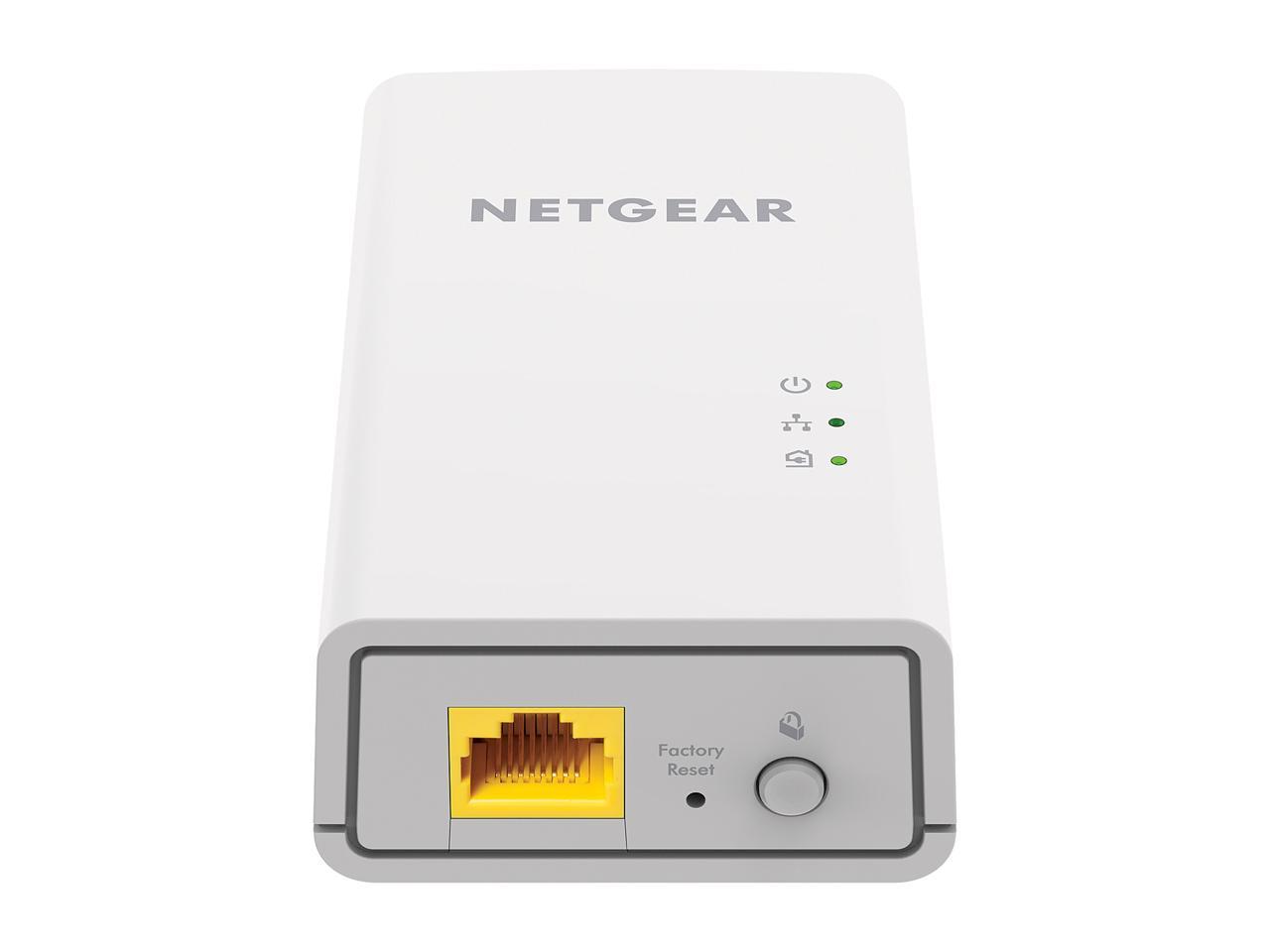 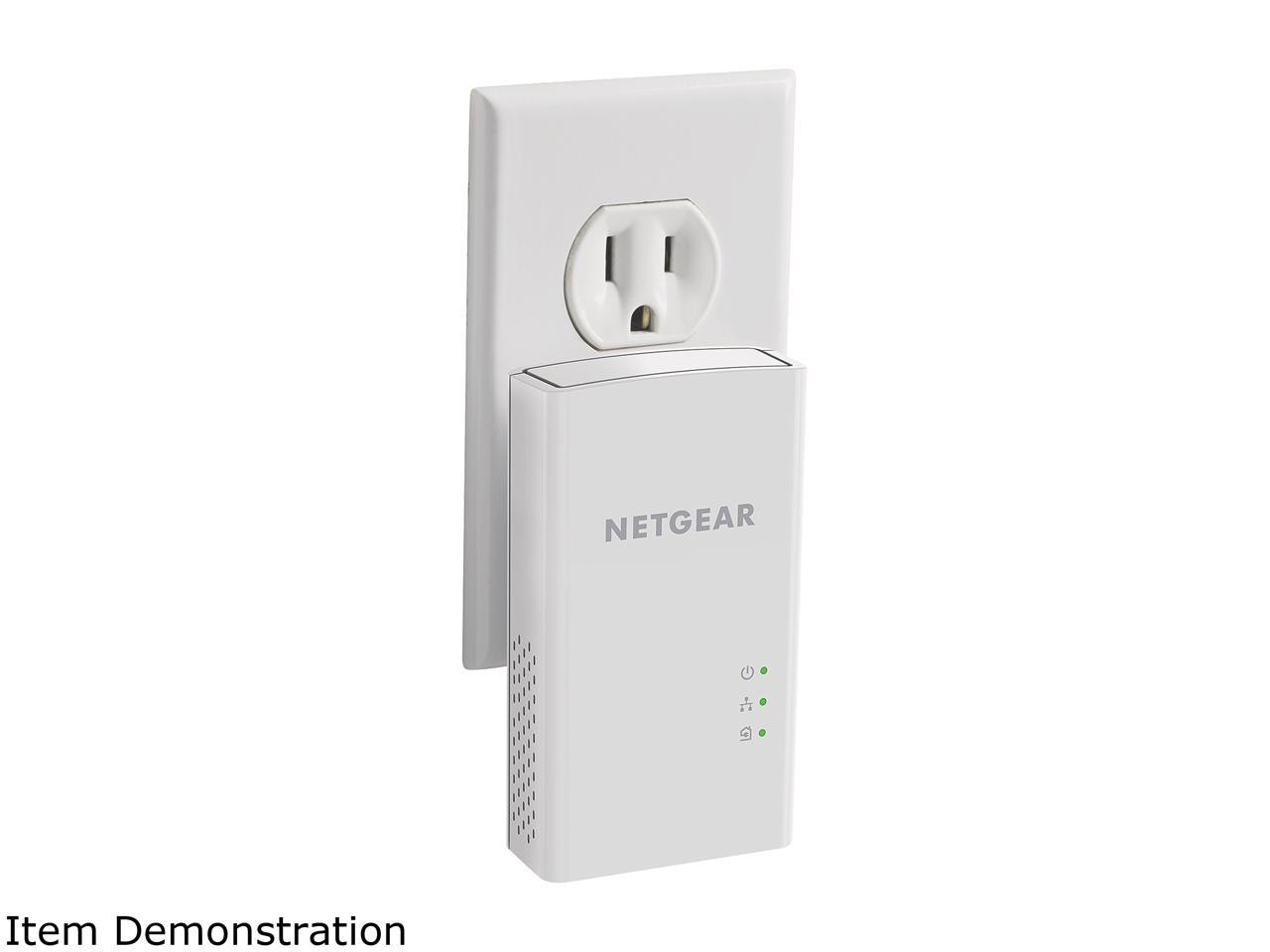 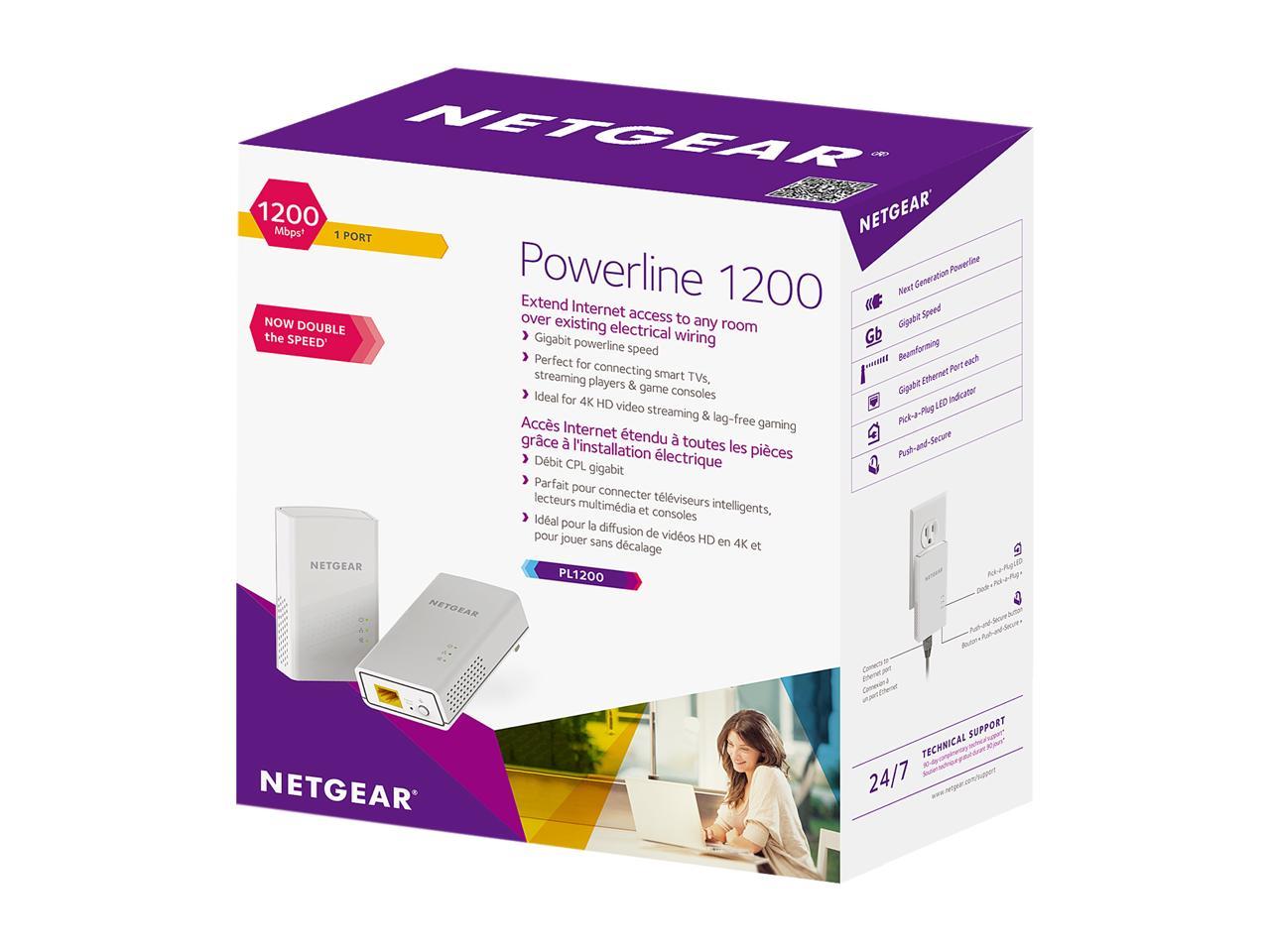 Cons: No power passthrough Powerline networking may or may not work in your house, depending on how/when/where it was constructed, the condition of the wiring, and other variables; the only way to know for sure is to try it. If it works, only a direct wired network cable beats it. I see dumb people reviewing Powerline network gear without reasonable expectations or even a clear understanding of how the tech works

Overall Review: Quick and dirty speed stats on the performance of the Netgear PL12000 vs an older AV(200) adapter: Read speeds: 52 Mbps vs 133 Mbps; Write Speeds: 45 Mbps vs 104 Mbps There's a lot of factors that go into how Powerline network adapters work (or don't work) in any given house (wiring condition/composition, when/where it was built, the makeup of your breaker box, etc... any one of these variables can bork the whole thing). Just because it doesn't work in YOUR house doesn't mean it doesn't work, and it's not an indictment of the product; it's just happens sometimes, and you probably weren't one of the lucky ones. If you're lucky and it works, it's an excellent alternative over sketchy and often unreliable wireless signals. Nothing beats running a Cat6 network cable between points, but if that's no practical then this is an excellent solution. Take another look at the new AV 1200 or AV 2000 adapters if you've sworn off Powerline in the past, it's gotten much better. Note this new generation uses the 3 prong outlets, so your house and outlets must be properly grounded for this to work properly. Biggest gripe about Powerline (not an invalid one either) is that, just like their wireless cousins, the claimed speeds are inflated and theoretical, and nobody will ever come close to achieving them. Not saying it's right, just that it is, so know that going in. As long as you jump in with a proper expectation and understanding of how they work, their best application and their limitations, you'll be fine. Clearing up some nonsense, yes it's a gigabit LAN port, and it isn't anything sinister. You're going to need gigabit LAN to get speeds greater than 100 Mbps no matter what, otherwise you'd always be capped at the fast ethernet speed limit of 100 Mbps. But the presence of a gigabit port with this technology doesn't translate into you should be expecting gigabit speeds as a result. TIPS: NEVER plug Powerline network adapters into a power strip or extension cord, they degrade your signal substantially or don't work at all. Worse case scenario if you really have to, get one of those extra thick gauge, short 1 ft. heavy duty extension cords for window air conditioners or refrigerators (plugged directly into the wall). Your speed will take a slight hit but still be relatively quick. If you have older generation (AV 200 or newer) Powerline adapters, these are supposed to exist in harmony with them, but you're better off replacing with new ones. The new ones will suffer a performance hit otherwise. These items are rated at megabits per second (Mbps), NOT megabytes per second (MBps). If you want to know the difference, the number you need to know today boys and girls is "8". If I'm getting 133 Mbps (megabits per second) read speed, I would divide by 8 to get 16.625 MBps (megabytes per second). So naturally you would multiply by 8 to convert Mbps to MBps. Google "Smallnetbuilder Powerline FAQ 2015" for lots more helpful inf

Pros: I had the Trendnet AV2 adapters which gave me an average transfer rate of 4.8 to 5.2 megaBYTES per second from a TIVO to a computer. TIVO is on the 1st floor computer on the 2nd floor. This is also the worst wiring section of the house. The new Netgear P1200 is averaging 7.8 to 8.2 megaBYTES per second from TIVO to computer. That is more than a 50% increase in speed. The best wiring area in the house can support 10 megaBYTES per second computer to computer using the Lan Speed test. I wish the TIVO could do that. I would have given 5 stars but they do not deliver the advertised 1200 Mbps in my 1900 sq foot house.

Cons: The only CON is the size of the unit with the Pass-Thru. Without a special adapter on the wall socket it is the only thing that fits on a 2 outlet socket. I found adapters that will allow the use of both sockets. So a little extra dough and you're set.

Overall Review: Last but not least setup is easy. I just plugged them in and they all talked to each other. I have four units in total. A TIVO, Wireless Access Point and a 720P Camera all hooked into the central unit near the master router. They all worked.

Pros: Easy to setup and provides outstanding speed for a home network. I have one that I use with my Tivo upstairs on the same power line as the router giving me 980 to 1077Mbps. I bought a second set for the first floor living room and I get from 248 to 582Mbps. On the first floor I have this connected to a powered switch with a Samsung HDTV and PS3 connected. This is just a excellent product with no network drops. I have yet to have any kind of connectivity problem.

Cons: None. It's not Cat6 but it's as close as you are going to get without having to rewire your home.

Overall Review: Performance may be off if your wiring is outdated. A simple update is just swap out your old outlet for a new one.

Pros: + Works as expected out of the box + Provides feedback on the quality of your 'line' (ie. some electrical wiring is 'noiser' than others, this device tells you which speed works best for your wiring).

Cons: + No 'offset' of the body from the plug. Depending on what else you may have plugged into the outlet, and what type of plug it is, you may find that you can only plug only this device into your wall outlet). An 'offset' from the body allows other plugs that may interfere with it to plug in as well. For example, plugs that plug flat against the wall will not work with this adapter, because they can't be plugged on top of it. (I'm not sure, I'm explaining this well, but just be aware of the outlet you will be plugging it into). Since this is a three plug connection, you can not flip it to allow for other plugs in the outlet. This will plug in best in the bottom outlet, allowing other plugs to work on the top. At worst this will take up an outlet all by itself, if other plugs will not fit.

Overall Review: Great product, it's a plus that it tests the line to ensure what speed it can run at. If your house wiring is not the best you will not be able to achieve Gigabit speed.

Pros: This is one of the easiest network devices I have ever installed. It is truly plug and play. Hook one end to the Cable Modem or Wireless Router RJ45 Jack and the other to your remote PC LAN jack and you are running. It is really that simple. Not drivers or software to mess with. Great Product overall.

Cons: None really. It does exactly what it states and works great.

Pros: I purchased this pair of power line adapters to replace two 500 Mbps power line adapters connected to my home entertainment. The main reason that I purchased the Netgear 1200 adapters was because I had other Netgear adapters already in my power line network. The speeds that I am seeing between these two adapters is around 15 MegaBYTES a second. The throughput over a 100 Mbps connection is approximately 12.5 MegaBYTES a second so my connection is faster than a 100 Mbps circuit. It is considerably faster than the 500 Mbps adapters that were replaced. These adapters were completely plug and play. I plugged them in and connected the RJ45 connectors and I was off and running. If you have a basic understanding of power-line networking and do not have AFCI circuit breakers with built in capacitors then I feel like you will be okay with this purchase.

Cons: On my existing network I had named each of my adapters so that I could glance at the Netgear power-line utility map and easily identify the circuit and speed. There is no utility that is compatible with this adapter that will allow you to name the adapters. In addition, the power-line utility from Netgear is not compatible at this time and I am not sure when it will be. With my existing adapters I was able to change my security key making my adapters unique for my network. With these adapters I was unable to change the security key so if I choose to use security I will have to use the default security key. Again this is a failure on Netgear's part to provide a compatible utility application to support these plugs.

Overall Review: I have been told that TP-Links 1200 Mbps adapters are made using the same components as the Netgear adapters. The TP-Link TPL-420E2K is the equivalent plug to this Netgear adapter and you can download TP-Link's power-line utility and it seems to work with these adapters. If you look at Netgear's FAQ you will see where Netgear says that the utiltiy isn't necessary to set up the adapters. While that is essentially a true statement you can't do the things that you can do with the other Netgear adapters (200 Mbps or 500 Mbps). It looks to me like Netgear rushed this product to market before the utility software was ready. I simply do not understand what was so difficult about adding another device type to their utility. The adapter works very well and is about twice as fast as my old adapters so I am pleased with them, but I am disappointed with the lack of supporting software and the attitude of their support group saying the software isn't necessary.

Pros: Easy to setup (unless you have to go a distance away to reach the plugs when setting up the devices) The speed rating is pretty fair considering the age of my household and the distance it's going from point a to point b.

Cons: Timing to sync the two adapters is a little shorter than I feel it should be.

Overall Review: Maybe incorporate a remote way to tell the adapter to sync with a IR remote or a app to initiate from a smartphone or tablet.

Cons: Direct Ethernet cable to modem is always going to be better. Speed tested around 53Mbps while direct Ethernet tested at 196Mbps.

Overall Review: I'm a renter so I can't drill holes and run cables. This was a great solution for getting an Ethernet connection for my upstairs PC. I plugged one of the units into a socket by the modem and connected the unit to my modem. Went upstairs and plugged the other unit into the wall by my pc, connected the unit to a linksys e1200 router, plugged my pc into the router and presto! Have not tried any online first person shooters but World of Warcraft ran as quick as it did on a LAN. Also have not tried speed tests without the router. I really don't need the router but I wanted a second wireless network for the upstairs as the signal from the downstairs modem was hideous.