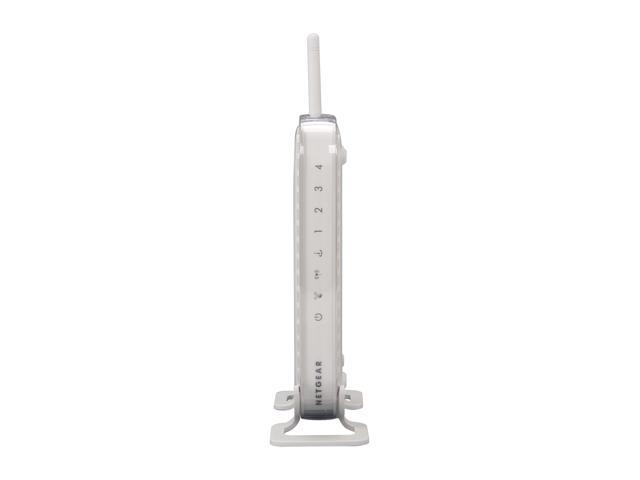 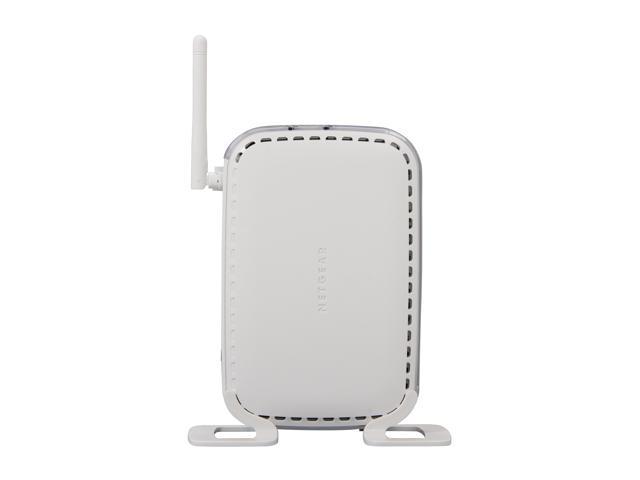 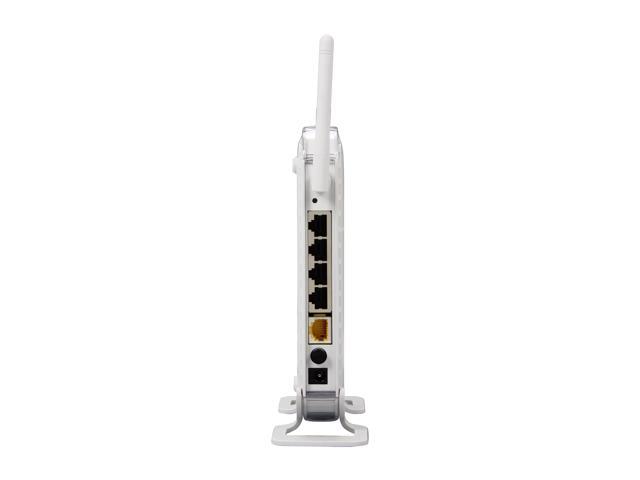 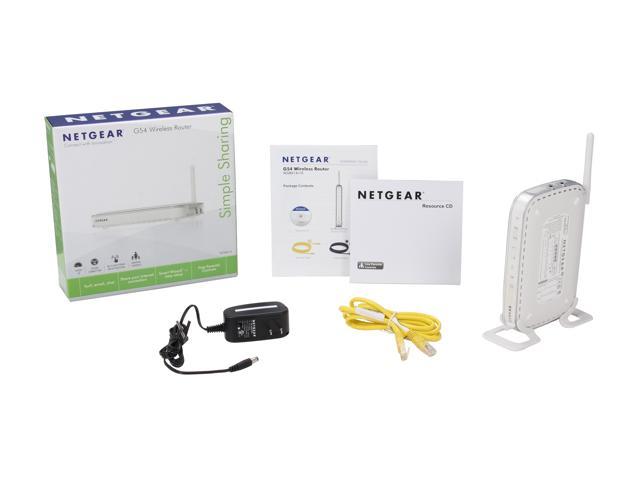 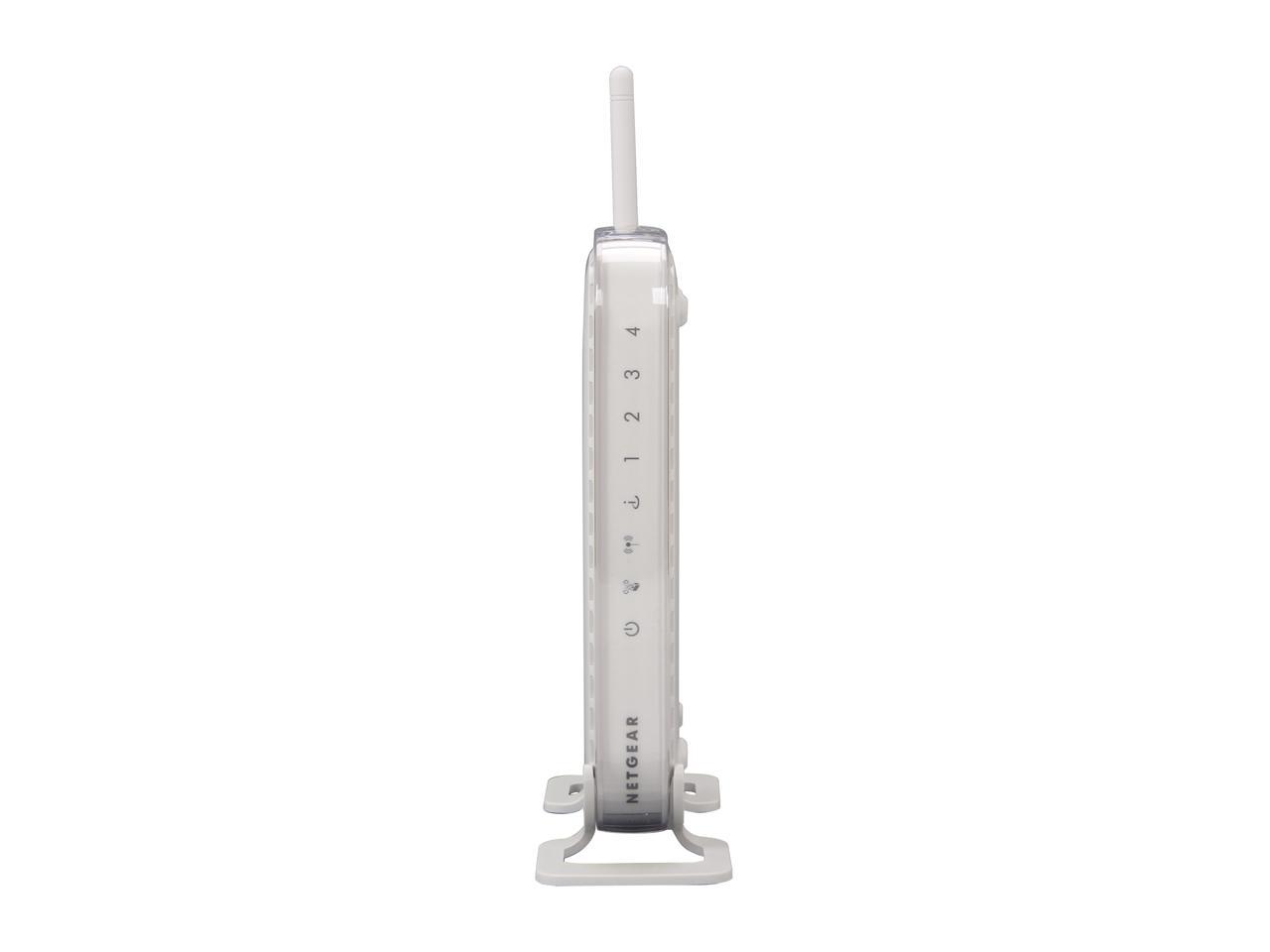 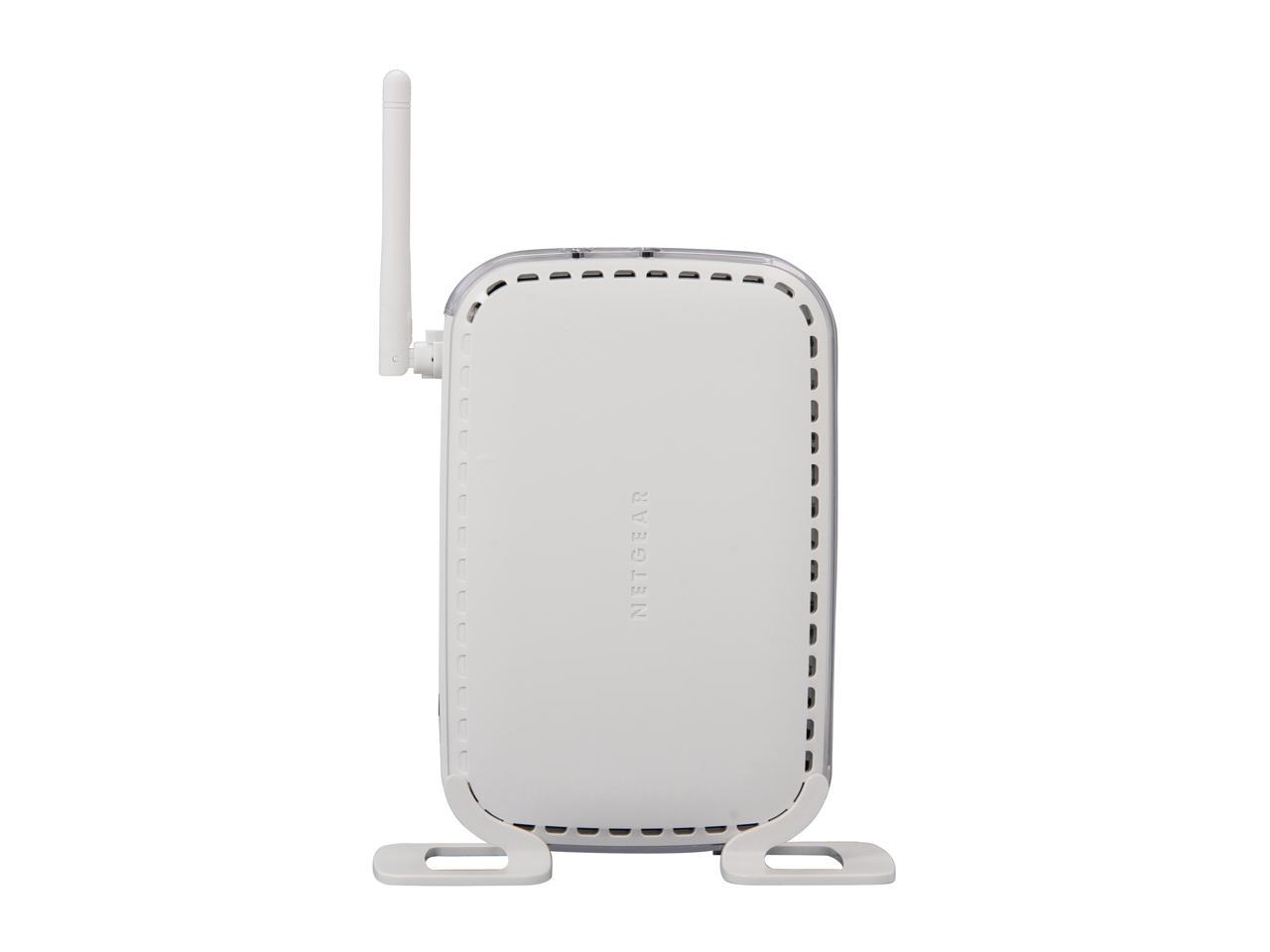 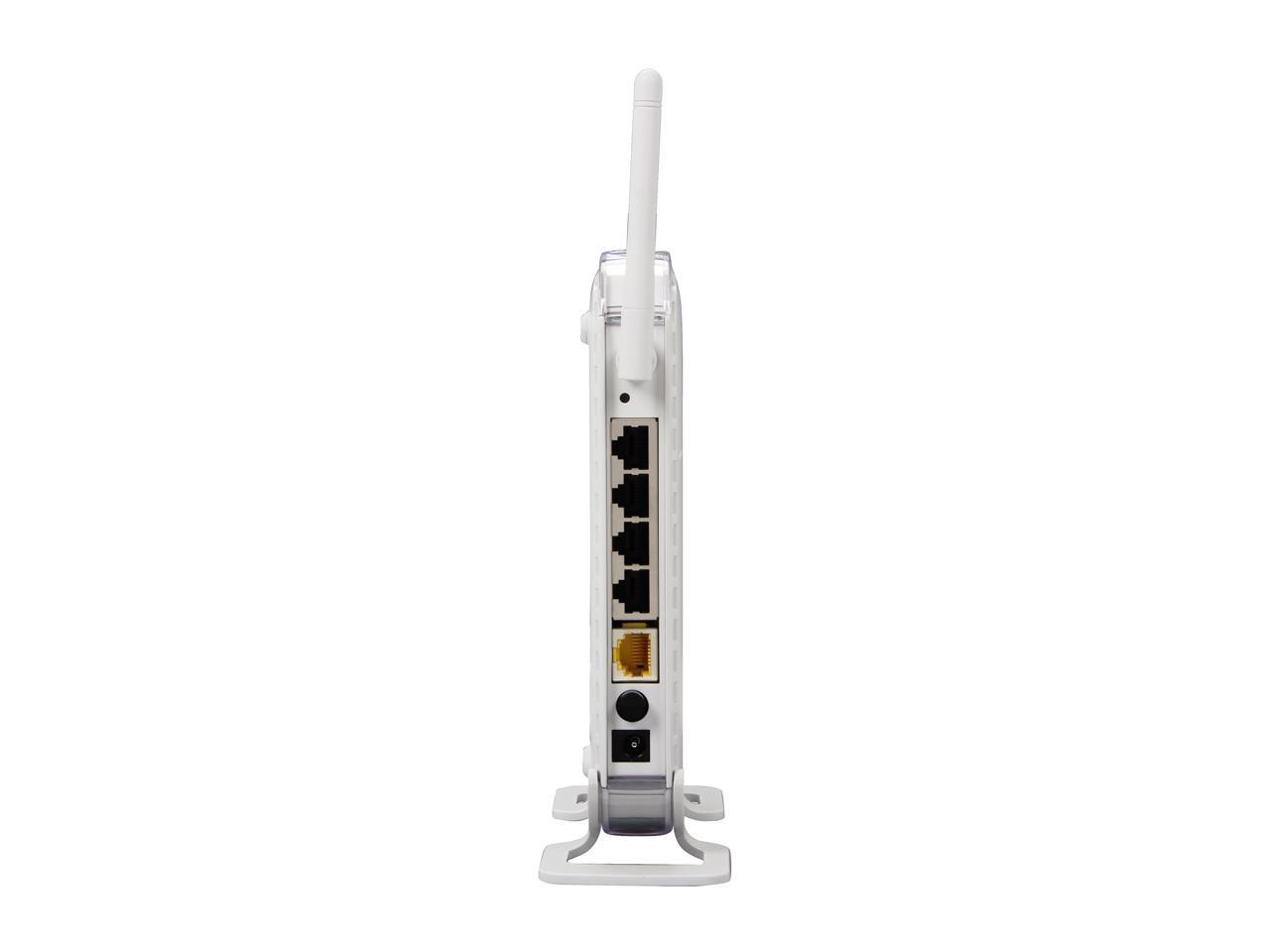 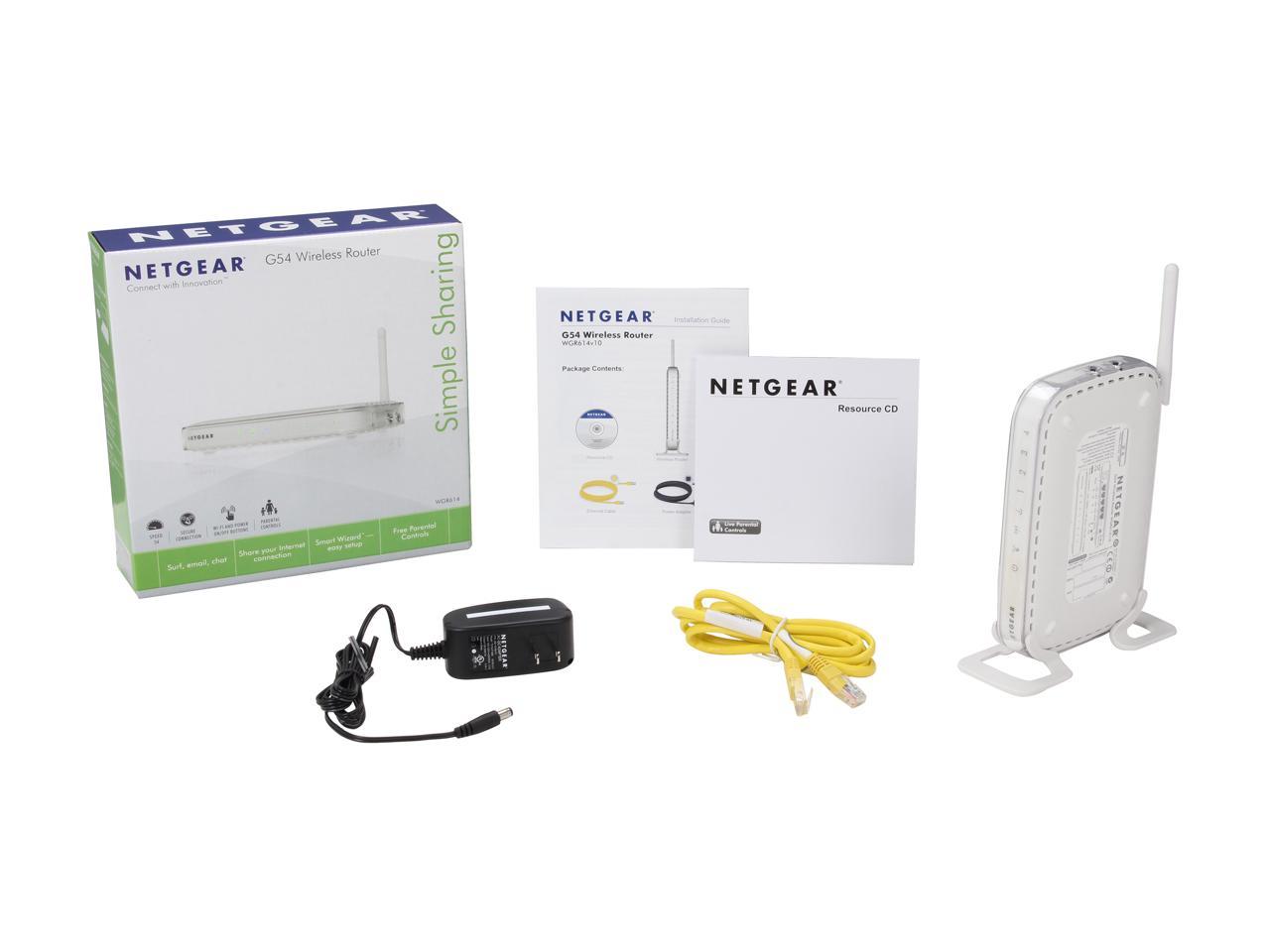 Pros: Works, hasn't dropped connection yet, and works on my nintendo ds =]

Cons: Installation CD was annoying. Would never complete. Went to www.routerlogin.net to setup up my router.

Overall Review: www.routerlogin.net is the netgear equivalent to 192.168.1.1 . Knowing that. it would of saved me a lot of time.

Pros: Worked great for a year and a half.

Cons: Wireless died after year and a half. Enet ports still work.

Pros: This router has 4 ports and a wireless antenna, it is very easy to install even if you don't know anything about setting up a small/home personal network, as you can just follow the instructions after popping in the CD that comes with the router. It offers the possibility to secure your network with standard protocols.

Cons: None so far. I guess it's not intended for heavy duty network traffic but more for home/small business regular internet work. It comes with only one RJ-45 (Ethernet port) cable.

Overall Review: I am using it with one desktop connected to the Ethernet port, another desktop connected all the time through a wireless antenna (USB) and a laptop with wi-fi and I have not experienced problems so far.

Pros: It works, and has surprising range in my house. I'm using it with a 6mbs connection and I seem to get the normal download speed I do with my modem with this, even at a distance. Very price effective, I mean 40 bucks with shipping isn't bad at all for this little guy. It looks cool, nice design.

Cons: Was a pain to set up for some reason. Had to reboot the router and modem around 5 times each, THEN it finally caught on to the connection and was broadcasting normally. Like others stated, this thing doesn't have the power to run custom firmwares, only buy it if you're like me; on a budget. Or if you don't plan to use multiple computers with it at the same time, highly wouldn't recommend that.

Overall Review: I will eventually get a Linksys router to run Tomato on, but this does the job just FINE for now. Nice little unit.

Cons: Surprised with Netgear's abundance that these are not a little cheaper.

Pros: Very inexpensive, I paid 20 dollars for mine after rebate. Fast, Coming from somebody previously using a B router Good range, I have it in an upstairs room w/ a non wireless desktop, my brother and I use it at full power a floor over and down and I use it outside in the hammock or around the house. It holds its range. Sleek, it looks really cool, and its packaged well The software is easy to set up, but see a gripe for more

Cons: Its easy to set up, however I wish I could have ran it as a secondary router, an AP. My linksys B router works fine as an AP under it though, so I'm letting it slide a little. For some reason, I had the same problem that some others had. It was running fine, all the sudden it dropped to 1 mbps and then totally died, I looked on the router, it kept rebooting. It would flash the one PC connected via CAT-5 and wireless would flash, then all the lights would go on and stay on, then it would start all over. I swapped the power supply for an aftermarket one and it works better.

Overall Review: It works well, overall I give it a four. One egg off because of the power problems, but at 20 bucks, it was worth it.

Cons: Floods when updating server list on Steam. If this sentence makes sense to you, then DO NOT buy this router.

Overall Review: If you own Steam and play games that require a server list, DO NOT buy this router, as it CANNOT handle it. Apparently the router becomes "flooded" when refreshing your server list it will not update your list completely or at all. Latest firmware, regedit, Steam preferences, port forwarding, nothing will fix this problem. I will end up sending this thing back for sure.

Pros: Easy set-up and works well with Windows 7. Came with an Ethernet cable to connect to the modem. It is a simple 4-port router with wireless and does what is advertised.

Overall Review: I was recently on vacation. My resort provides a broadband connection, but only wired. The DSL modem is mounted behind a table and is very inconvenient. I tried using an OLD wireless router that I had on hand, but the support disk only supported up through Win XP. I bought the WGR614 at a local Wally-World. The WGR614 setup was easy with the included CD on a netbook running Win 7 32-bit. You will need a second Ethernet cable for the PC to router connection during setup. This provided wireless internet to my computer and got rid of the annoying cable running across the floor. I would recommend this router to a friend.