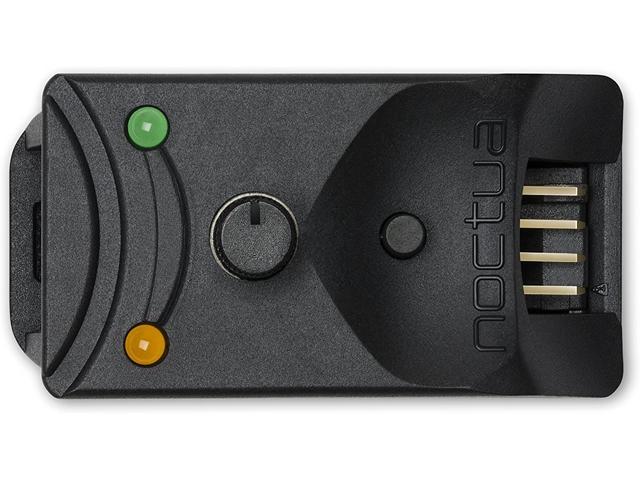 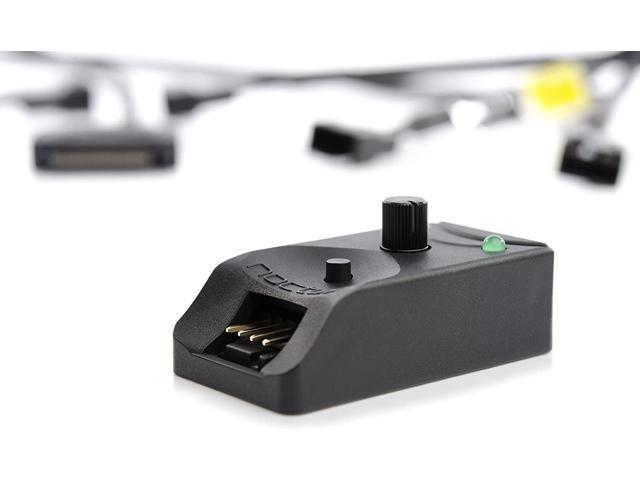 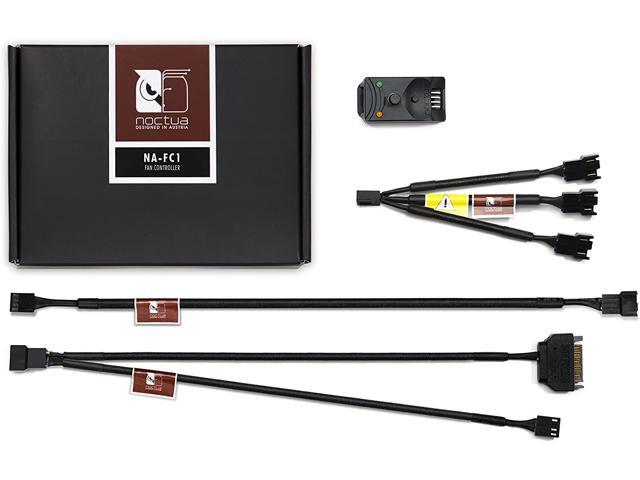 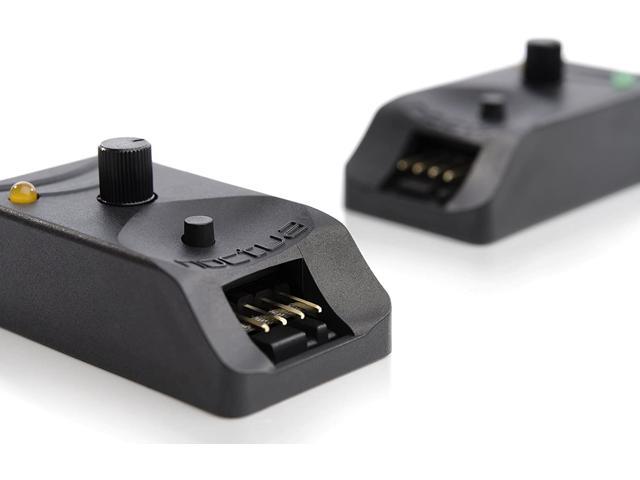 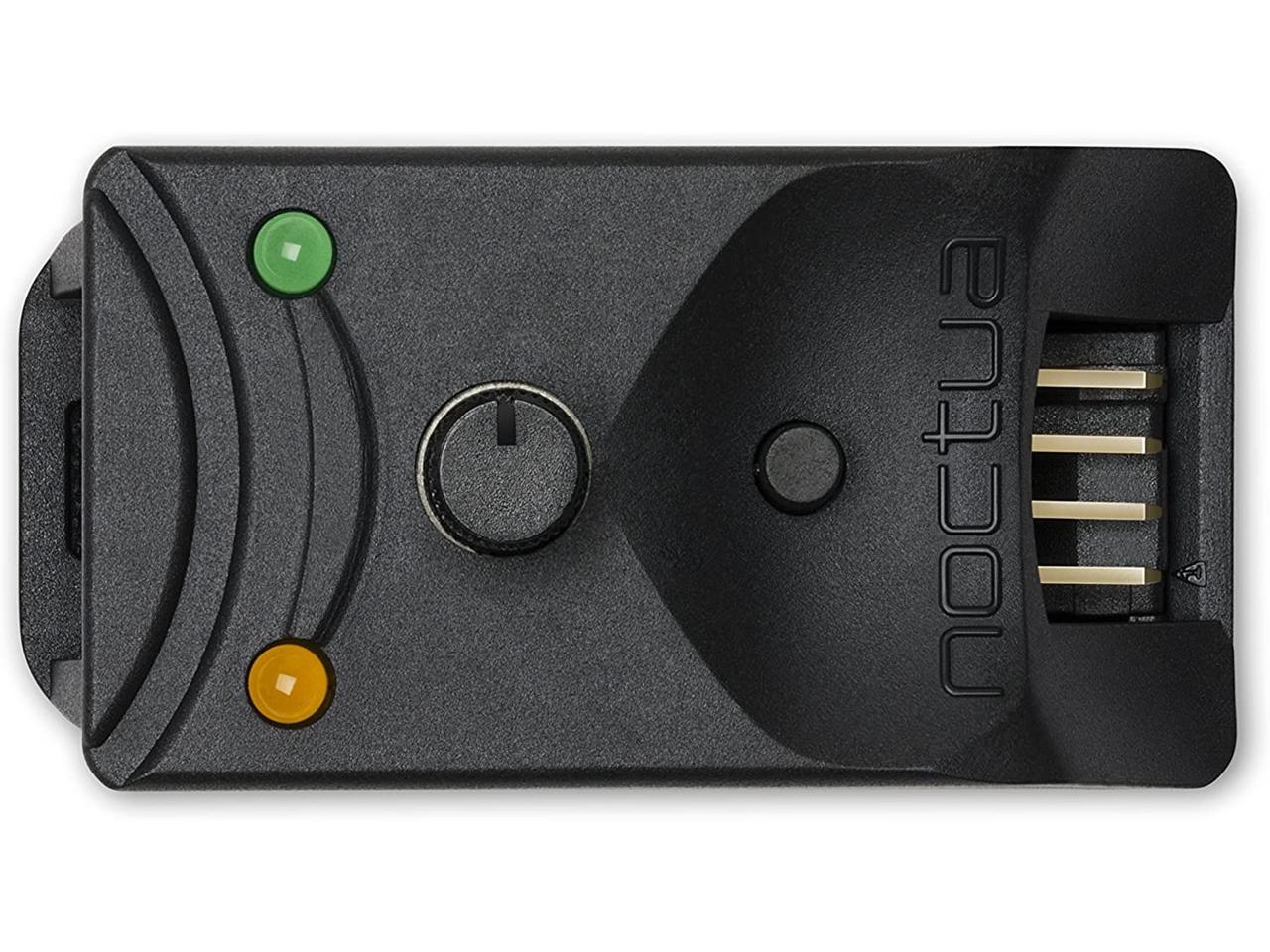 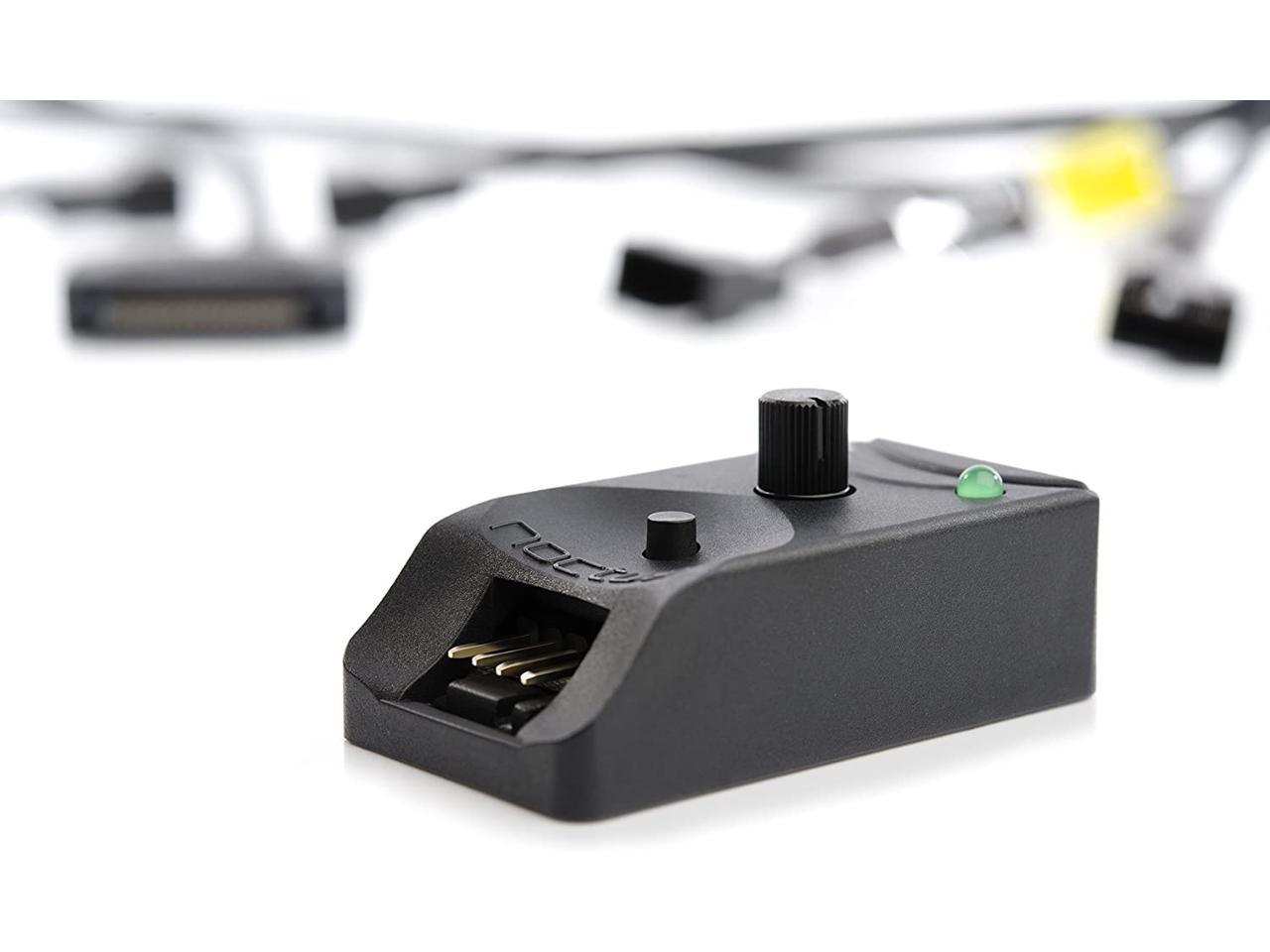 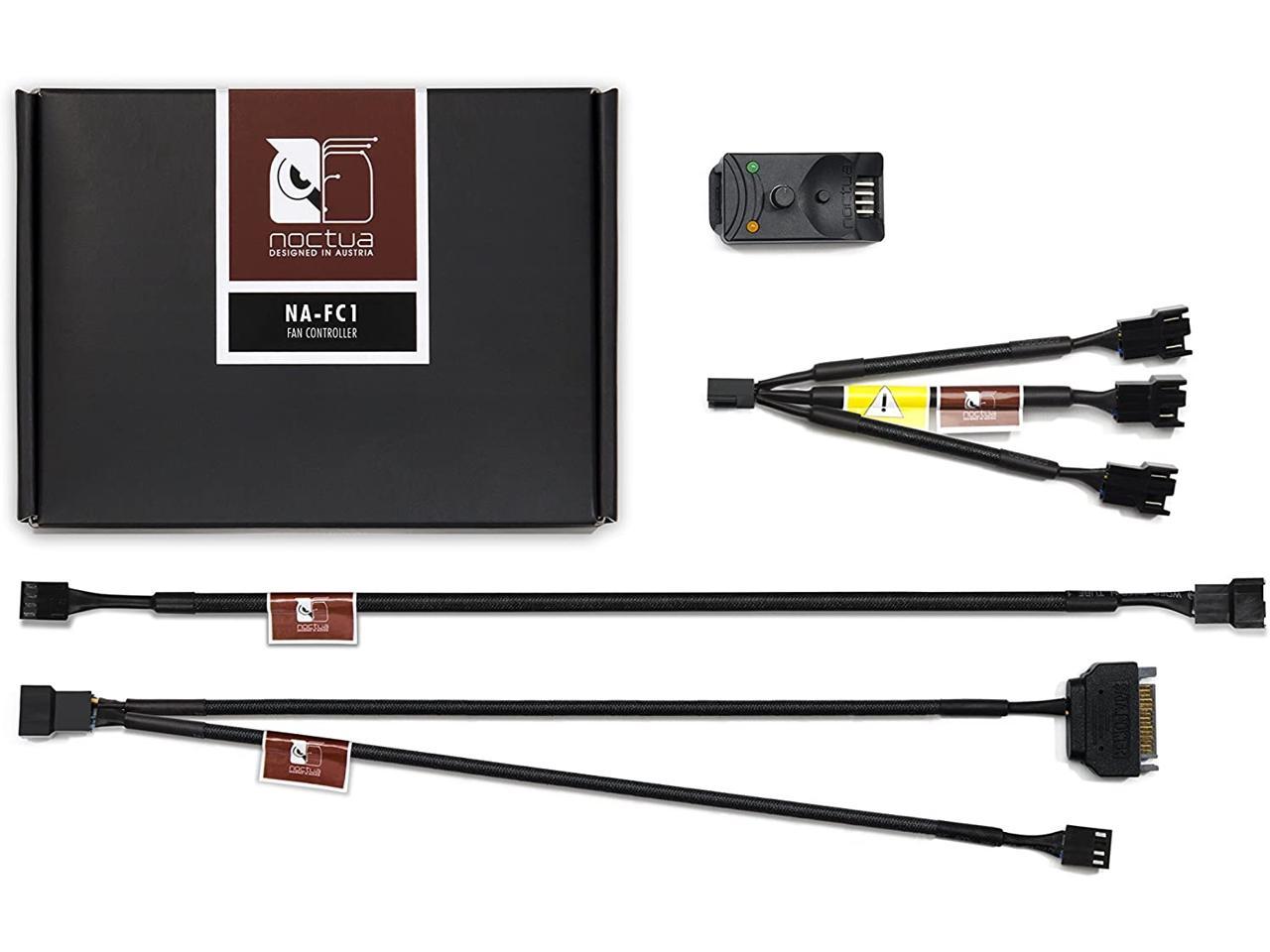 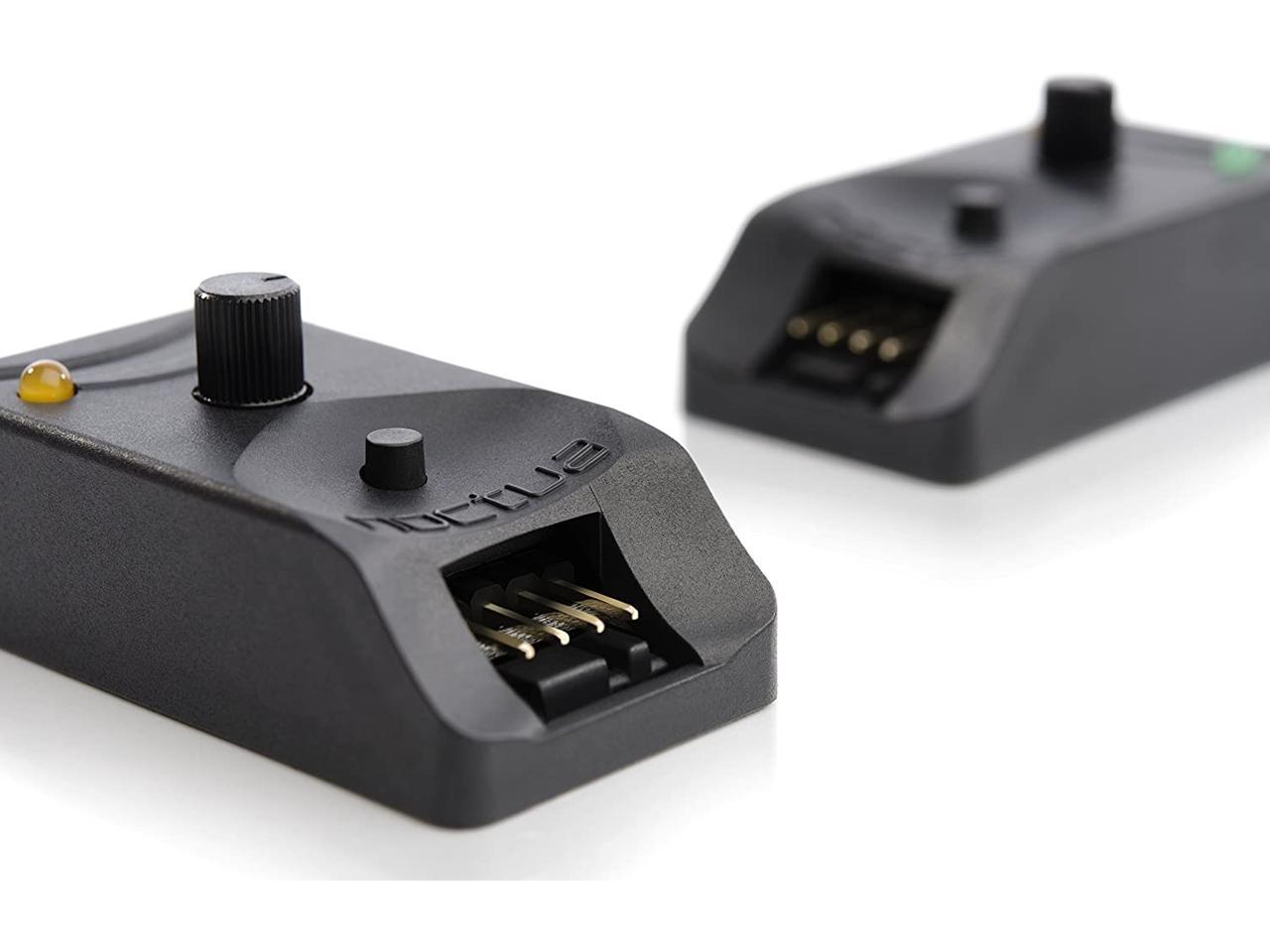 (12)(1) Write a Review
See more "pwm fan controller"
In stock.
Ships from United States.
Overview
Specs
Reviews
The NA-FC1 is a compact, highly flexible controller for 4-pin PWM fans that can both work on its own for manual speed reduction and also work in tandem with the automatic motherboard fan control. By adjusting the NA-FC1’s speed control dial, users can either manually set a PWM duty cycle from 0 to 100% or reduce the PWM duty cycle supplied by PC motherboards in order to have the fans running slower than the automatic motherboard fan control would allow. While the brightness of the orange status LED provides visual feedback on the current dial setting, the push button allows the NA-FC1 to be switched into “no stop” mode, which prevents the fan from falling below a speed of 300rpm. Thanks to the supplied 3-way split cable and power supply adaptor, up to 3 fans can be controlled simultaneously.

Learn more about the Noctua NA-FC1

Pros: -Well... my case has an onboard 3-pin controller, and I had 3x 12v Noctua IndustrialPPC 3000RPM PWM fans on it, set to 5v, and they were still VERY audible. My case is the Fractal Design Define R3, so it has a decent amount of bitumen coated sound proofing on both panels as well as the front and top. With the NA-FC1, not only can I adjust all the fans with my motherboard, its whisper quiet. -Very intuitive, simplistic design, with some great options, and a fantastic manual for really easy installation.

Cons: -Was a bit crampt in the back of my case. -No Adhesive to stick it where you want it to stay (ended up cable tying it behind the motherboard tray) -Cables can kind of come loose, suggest Noctua to add some sort of clamping mechanism -It feels cheap for $24 Canadian, but in function is farm from it, so worry not! -It gets 5 eggs, but, hopefully someone at Noctua gets the memo about the cables (namely the 3-way splitter) being lose on the side that connects to the FC1.

Overall Review: Being someone who has a lot of Noctua Products, and in the past has had extremely good customer service, I am a Noctua fan for life. People will call them ugly, they'll spin and spudder about a lack of RGB, but Noctua nails its concepts head-on! Fast, Quiet Fans, with a loving build quality and well thought out design.

Cons: - Only one channel, so you'll need more than one if you want to have your intake fans at a different RPM than your exhaust fans for example. - Only one three way splitter included. Noctua fans come with splitters but I have Corsair fans.

Overall Review: I've been looking for a fan controller since my Gigabyte Z97X-UD5H-BK's fan control is garbage. There is no way to set custom curves in the UEFI, and after a while the fans start to ramp up and stay at a higher RPM than normal. I tried the fan controller that's built into the MasterCase Pro 5, but it's too loud even on the low setting. I tried multiple fan controllers, starting with the NZXT Sentry (from old build), then the Corsair Commander, and finally NZXT's Grid+ V2. The Sentry worked great, but I didn't want to sacrifice a 140mm fan in my MasterCase Pro 5. Both the Commander and the Grid+ were garbage. The Commander will run your fans at 100% when you wake your computer from sleep, and you have to go into Link and change the percentage or fan curve for them to operate at the correct speed. The Grid+ doesn't maintain the set speed or curve. This wouldn't be an issue for some fans, but I have five ML140 fans connected and they are LOUD at full RPM. Disgusted with the two software controlled options, and not wanting to spend over $100 on an Aquaero 6 LT (the only good software-based fan controller), I decided to try Noctua's fan controller. Needless to say it works great! I have five fans connected to it using two ModMyToys 4-way PWM fan splitters and the SATA power connection. Very satisfied and can't recommend highly enough! My only complaint is that I wish there was a three or four channel option to cut down on cable mess of more than one controller if you want more than one speed for multiple groups of fans.

Overall Review: I'm happy I bought this awesome lil thing. (see pics) Sata powered and It also has the option of letting your cpu control the fans which I like but am not using at the moment. It comes with a few splitter and extenders which came in handy. It would've been nice if they made it magnetic, so you can just stick it wherever. Buts it's OK I found a perfect spot on the front of my tower. I strongly recommend buying this! In fact, I plan on getting a second one!!

Cons: Power adapter is only has Sata power and not molex.

Pros: It works as advertised. It's smaller than it looks in the product photos.

Cons: 3A limit but that can be worked around. wish the knob was a little longer.

Overall Review: I have three of these for a hydronic heating system in my sailboat. On one of the zones, I have a 4.8A and 3.3A fan connected to it for a total of 8.1A which far exceeds the 3A limit. I ran switched ±12v to the directly to the fan and tapped off that connection to power the NA-CV1. I only ran the blue control wire from the controller to the fan which is a low current control wire so that they 8.1A load does not go through it and it works perfectly.

Cons: Have to watch out that the connectors don't pop out of the hub; I wish a double sided tape would of came to stick the hubs to the back of the mobo panel.

Pros: I have a few of these. They're a great way to convert PWM fans to work with a straight +12V output.

Overall Review: I have a few of these. They're a great way to convert PWM fans to work with a straight +12V output. Whether for your build, testing fans, etc. It's just a cheap, easy solution without having to go out and buy a full blown PWM source solution.