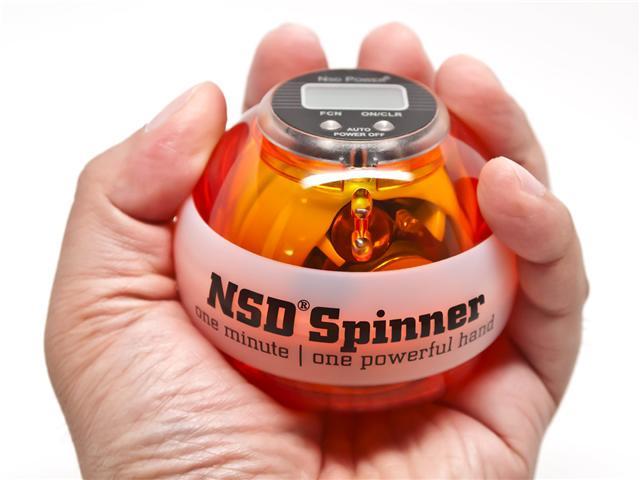 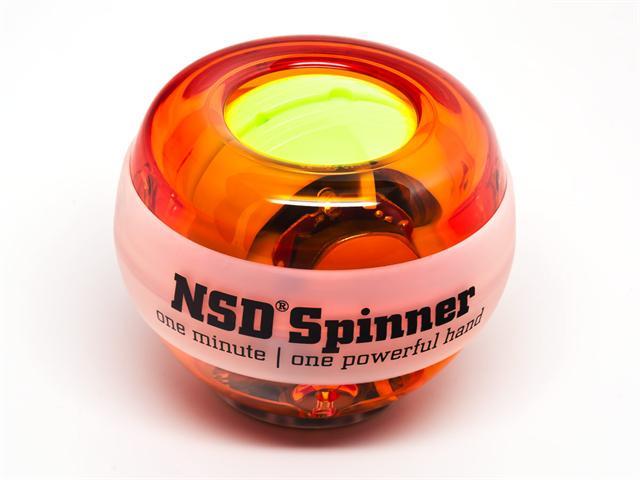 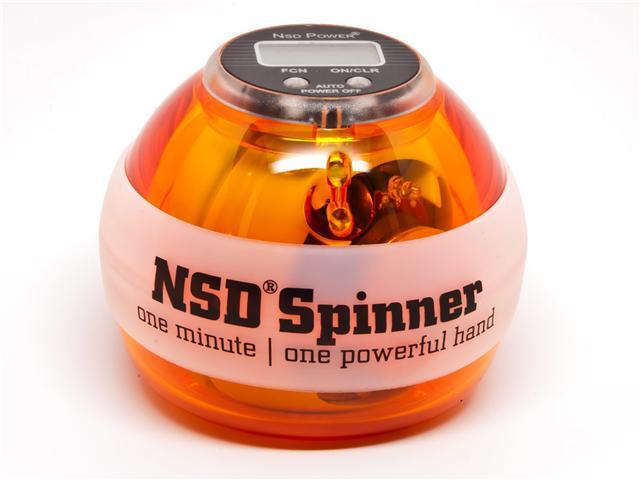 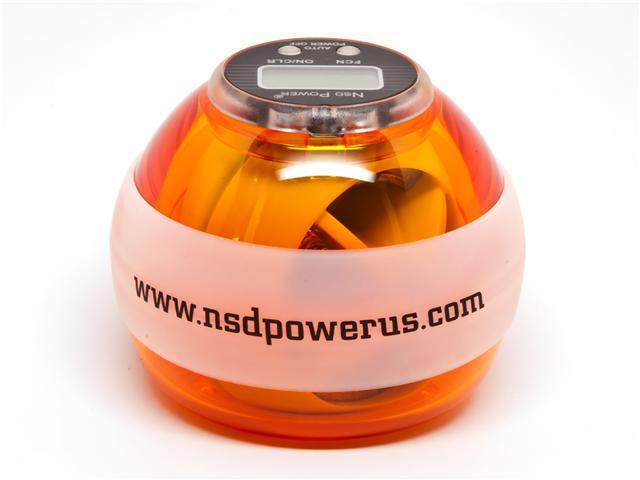 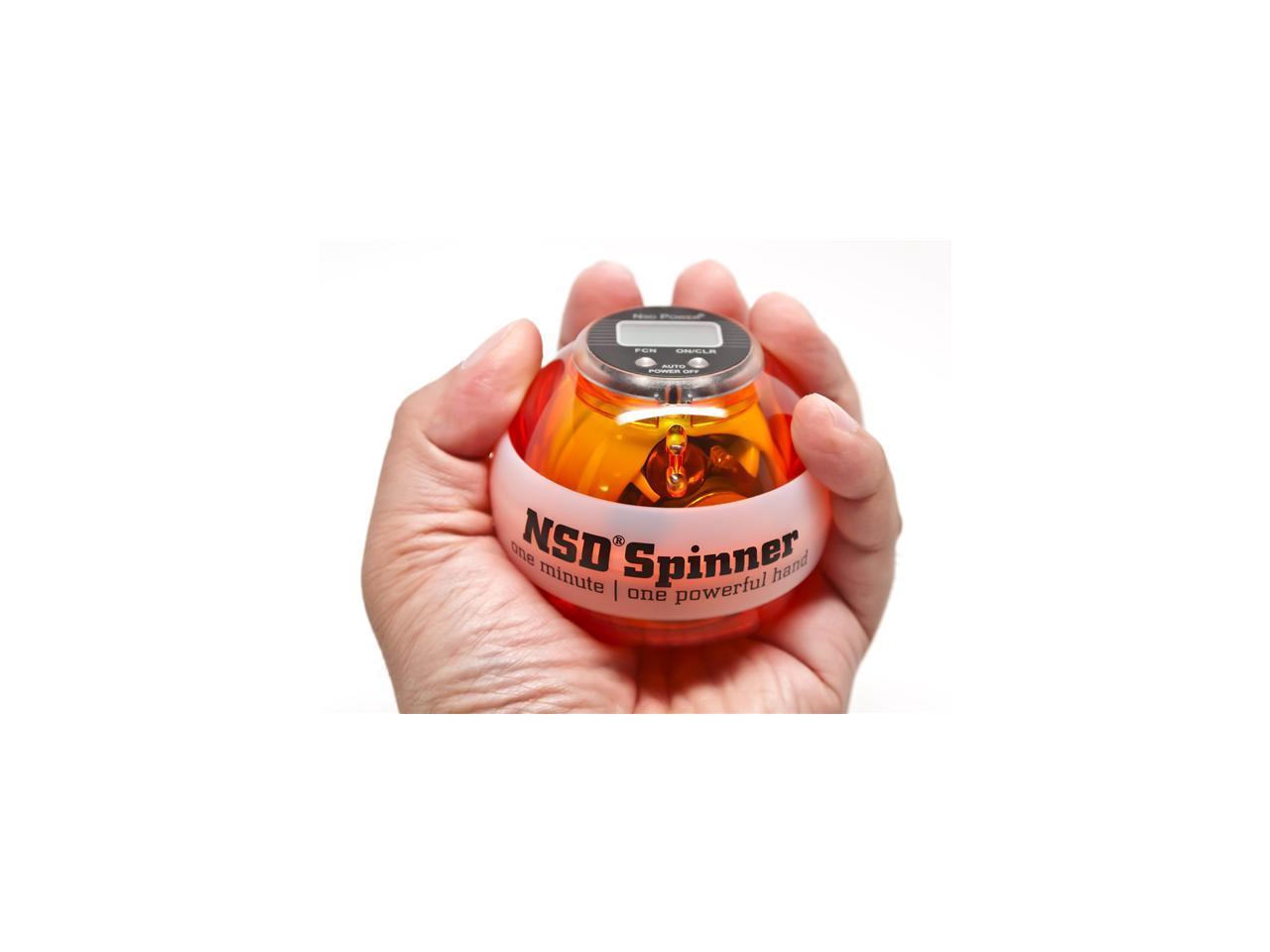 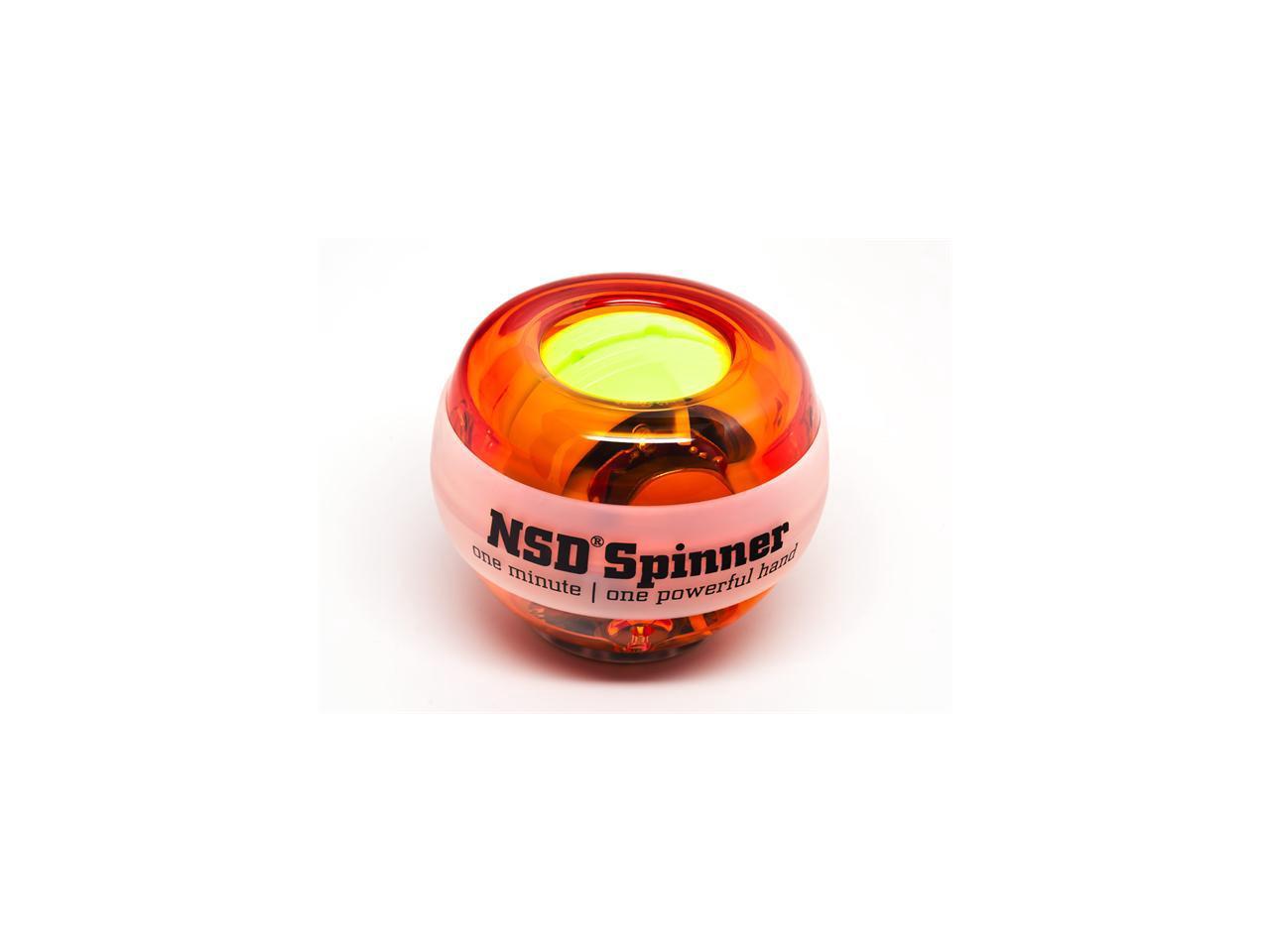 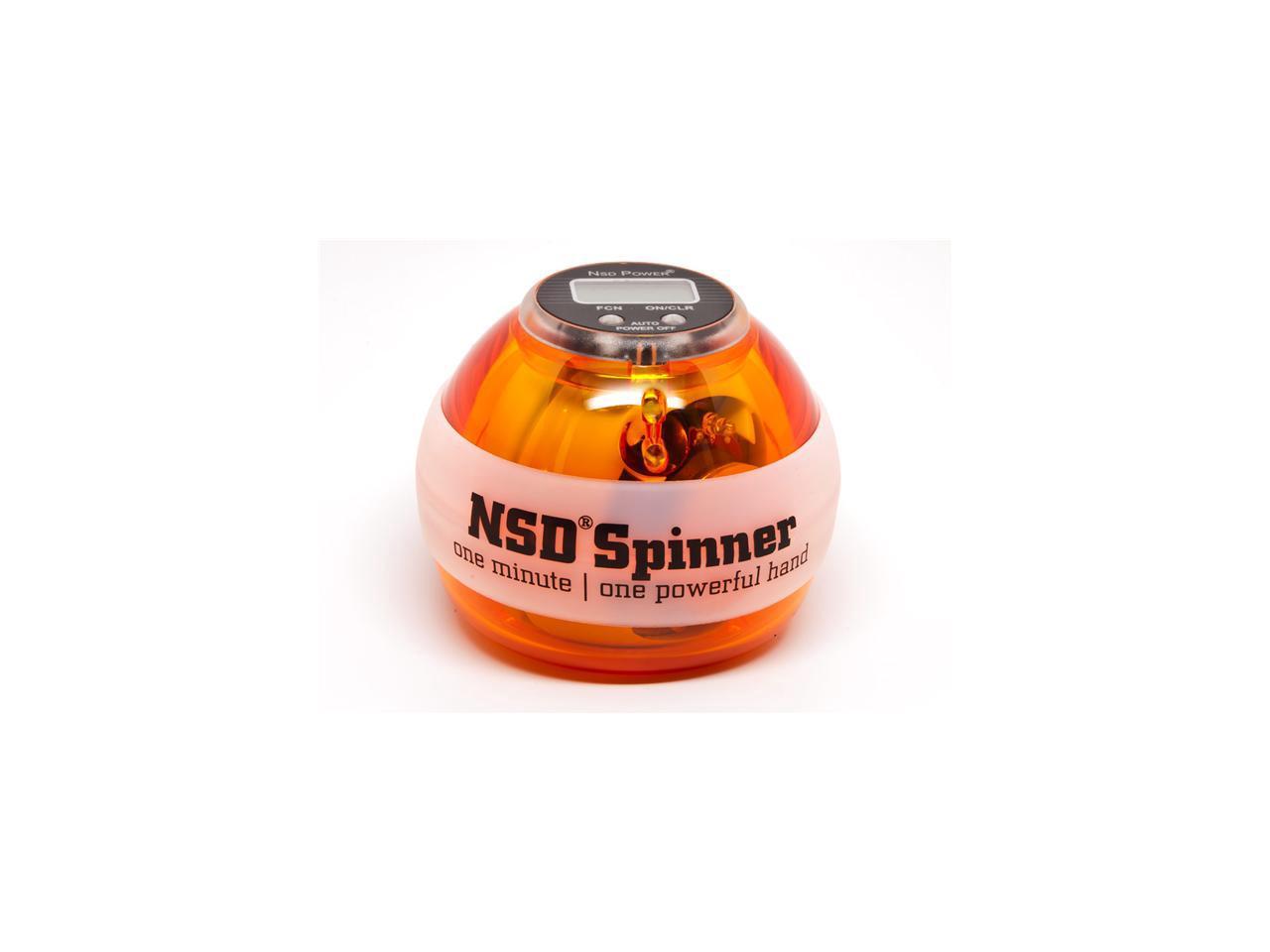 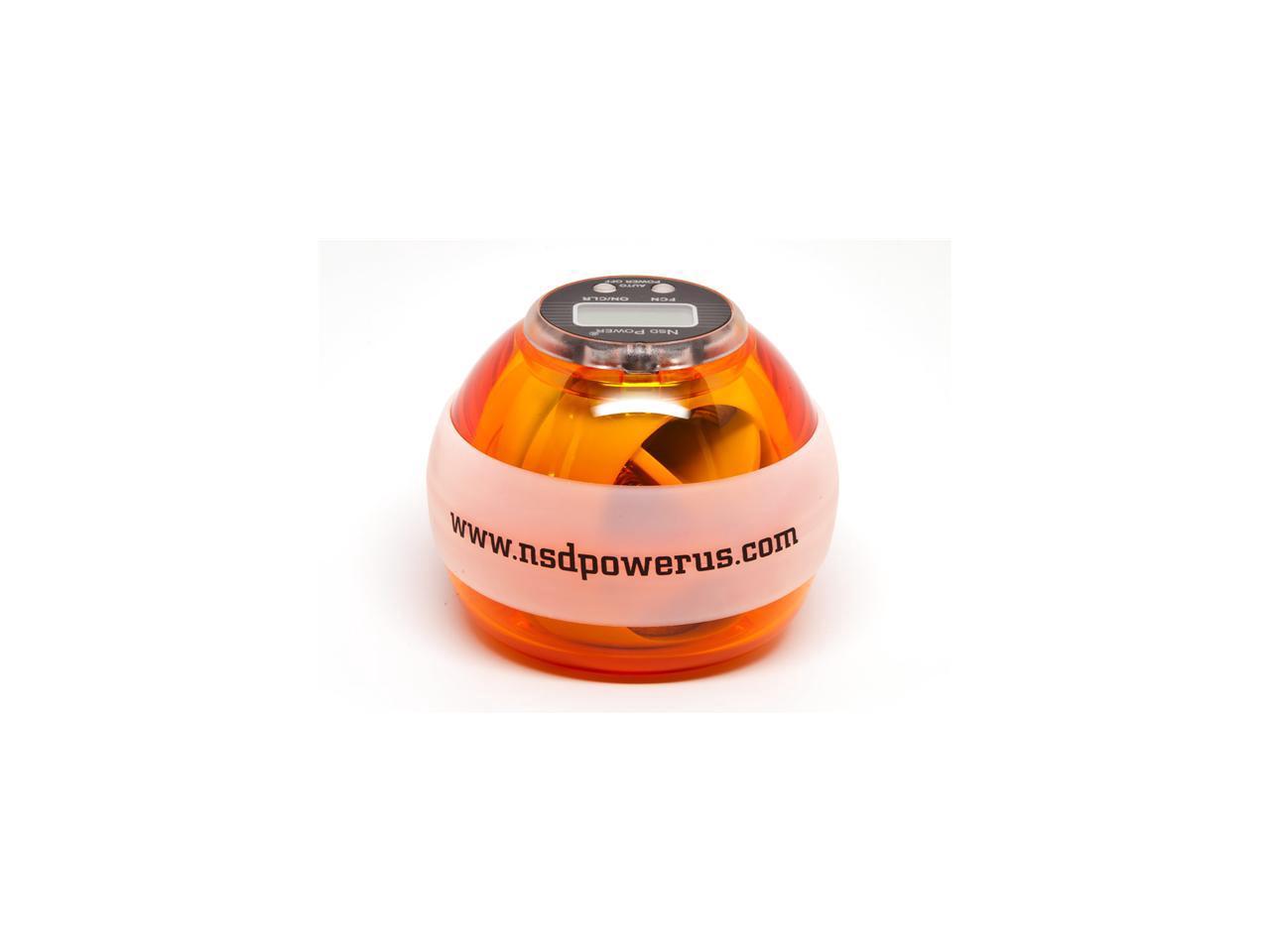 
Keep track of your wrist and forearm work-out and push yourself to get stronger! Our Winner’s Amber Lit Spinner packs an advanced counter that displays your work-out information on a compact LCD screen. In addition, your work-out energy is converted into electricity to drive an array of LEDs on the gyroscope, and provides a wonderful light show in red to entertain everyone in your presence! The amber colored plastic is high quality, impact resistant and provides a unique hue to the light emitted by the diode.Regular use of NSD Spinner gives you the following:POWER—Regular use of the NSD Spinner will strengthen the muscles in your forearm and wrist, giving you the strength and power you need in your sports and daily activities.SPEED—NSD Spinner also maximizes the use of the explosive muscles in your forearm and wrist, allowing you to increase the speed of your arm motion, resulting in quicker, more powerful swing or throwing motion in whatever sport you play.CONTROL—The NSD Spinner also trains the muscles in your forearm and wrist for fine motor control and coordination, because to spin the Spinner at 10,000+ RPM requires precise timing and fine movement. Using the Spinner regularly will improve control over wrist and arm muscles for delicate tasks such as playing a musical instrument, or anything requiring surgical precision of your hand.Power. Speed. Control. These are the attributes that any athlete desires. And the original NSD Spinner will deliver them. Go ahead, give it a spin. For fourteen years NSD spinners have helped golfers, tennis players, trainers and athletes alike. With your arms and wrists conditioned to tackle and control the most rigorous sports activities, you can also overcome the daily grind of repetitive stress induced injuries at work. But most of all...IT’S FUN FOR EVERYONE!A minute a day is all it takes. Give it a spin!

Pros: I have had a blast with this. Very smooth rotation. Lights are nice. Good grippy surface. Nice hum. I am very happy with this though it is not perfect. Definitely worth the twenty something dollars.

Cons: The buttons are rounded and very hard to push. Not physically possible to push them with your finger unless you use a fingernail. Broke my thumbnail just trying to turn it on. It should just turn on when it gets moving in my opinion. Mine skips over the session high screen ("current highest RPM"). That is a bummer. I'd like to see how close I am getting to my high score. Crippling that so they can differentiate between models is slimy, if that is what they did. Maybe mine is probably just defective. Or the control is extremely unintuitive. Nowhere does it say what model this is in the NewEgg info. There appears to be more than a dozen of these things. This one just has blue lights, and the digital doohickey on the top. It has a countdown thing (for getting an average RPM), but never makes a peep when it gets down to zero. And you can't watch it, because the digital thing is against the palm of your hand.

Overall Review: It says in the documentation it can go higher than 13,000 RPM. Maybe, all I know is that I have very strong hands but can only get it to just under 12,000 RPM. Close enough, I guess. And I have only had it for 6 days. Also, if you are expecting a lot of force for exercising, you probably need a heavier model. This is 10 lb resistance, if that, at any maintainable speed. It can cause blisters on the inside of your pinkies, if you are not mindful. I thought it was going to hurt in my forearms after using this. So far nothing but those sore pinkies. And I used it 3 hours yesterday including 2 hours continuously with one hand while watching a movie at about 4,000 RPM. It does exercise though, my heart does speed up a bit...maybe walking level. I did notice a little bit of wrist pain when I was using it, but nothing after. Of course, for all I know, it could make you very sore. Other people said they got sore. When it moves very fast the lights get very bright. I have doubts the LEDs are made to take that very long. You probably have to use the pull string to start this. Not much luck with the finger starting method (got it once). It seems to resist going fast enough to start rotation on the other axis. You have to get it moving fast enough to start making light before it will move on the other axis and you can get it up to speed. Still, some learning curve to go probably. Some people don't like the bright lights, and this scares the cr@pp out of my cats, so I have to use it in another room.

Pros: - it is an all-in-one product, so no wind up string like the lesser models - changing LED effects to match speed encourage harder workout

Cons: - it's a gyro ball, so it runs loud enough that it cannot be used at the office (I tried... it caught a lot of people's attention)

Overall Review: Yes, would recommend for home use

Cons: Only worked a few times AFTER I got the hang of it on how to keep it spinning.

Overall Review: I liked it after I figured out how to keep it spinning. But then after about ten periods of use, it would not "spin up".