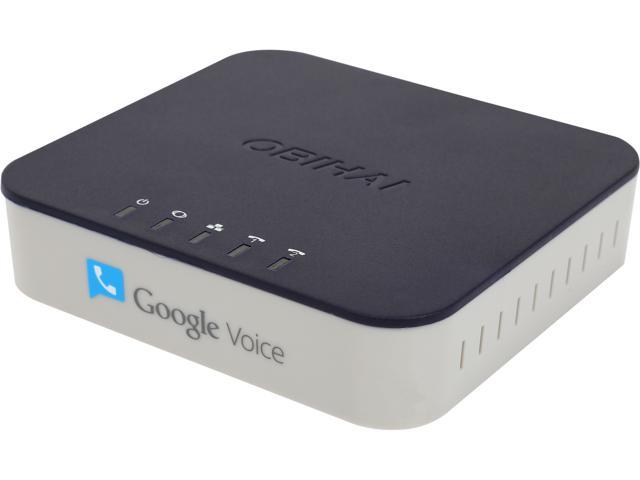 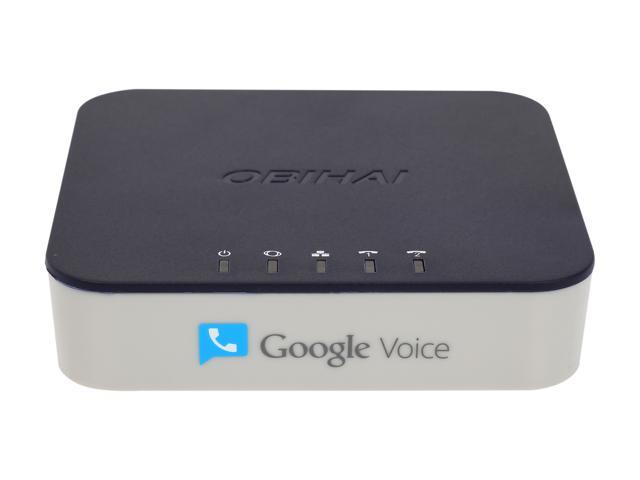 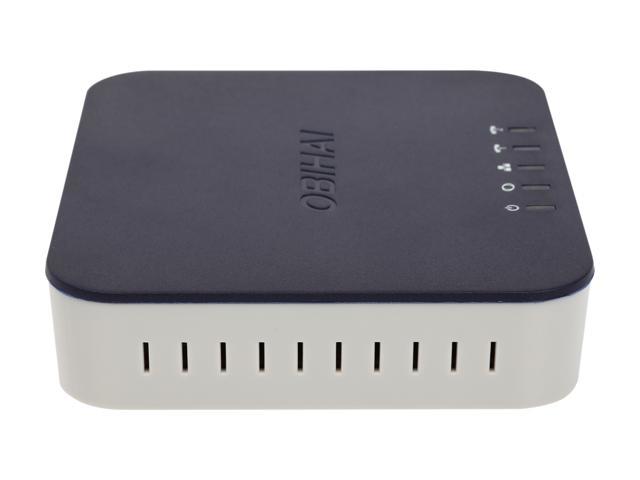 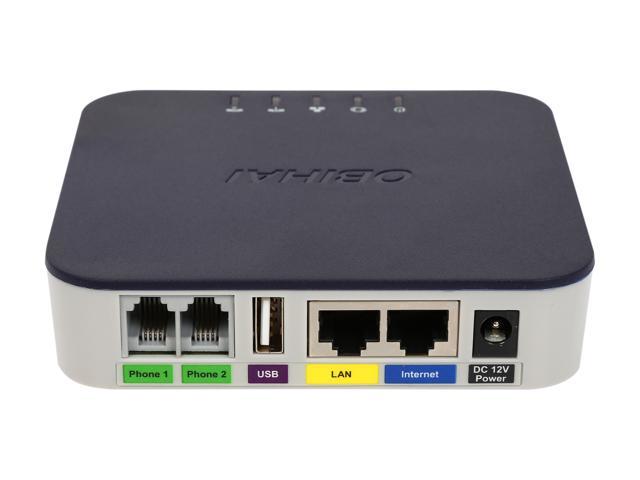 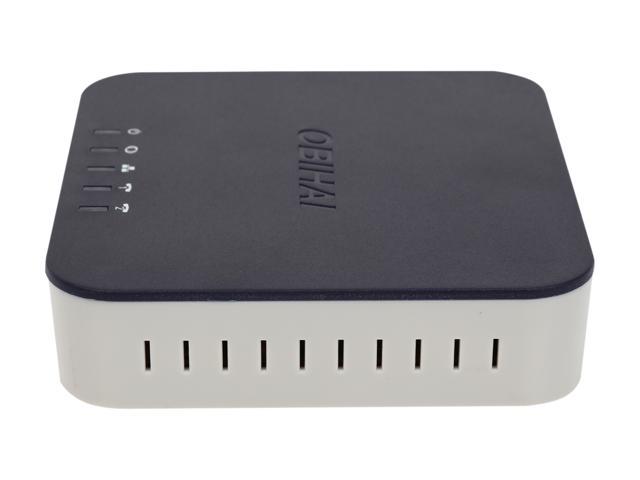 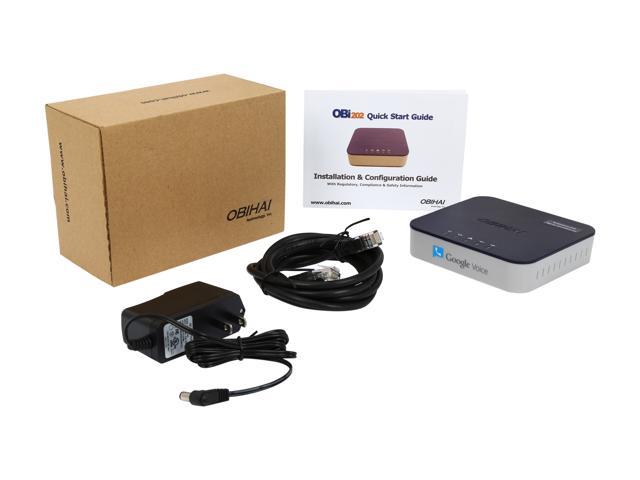 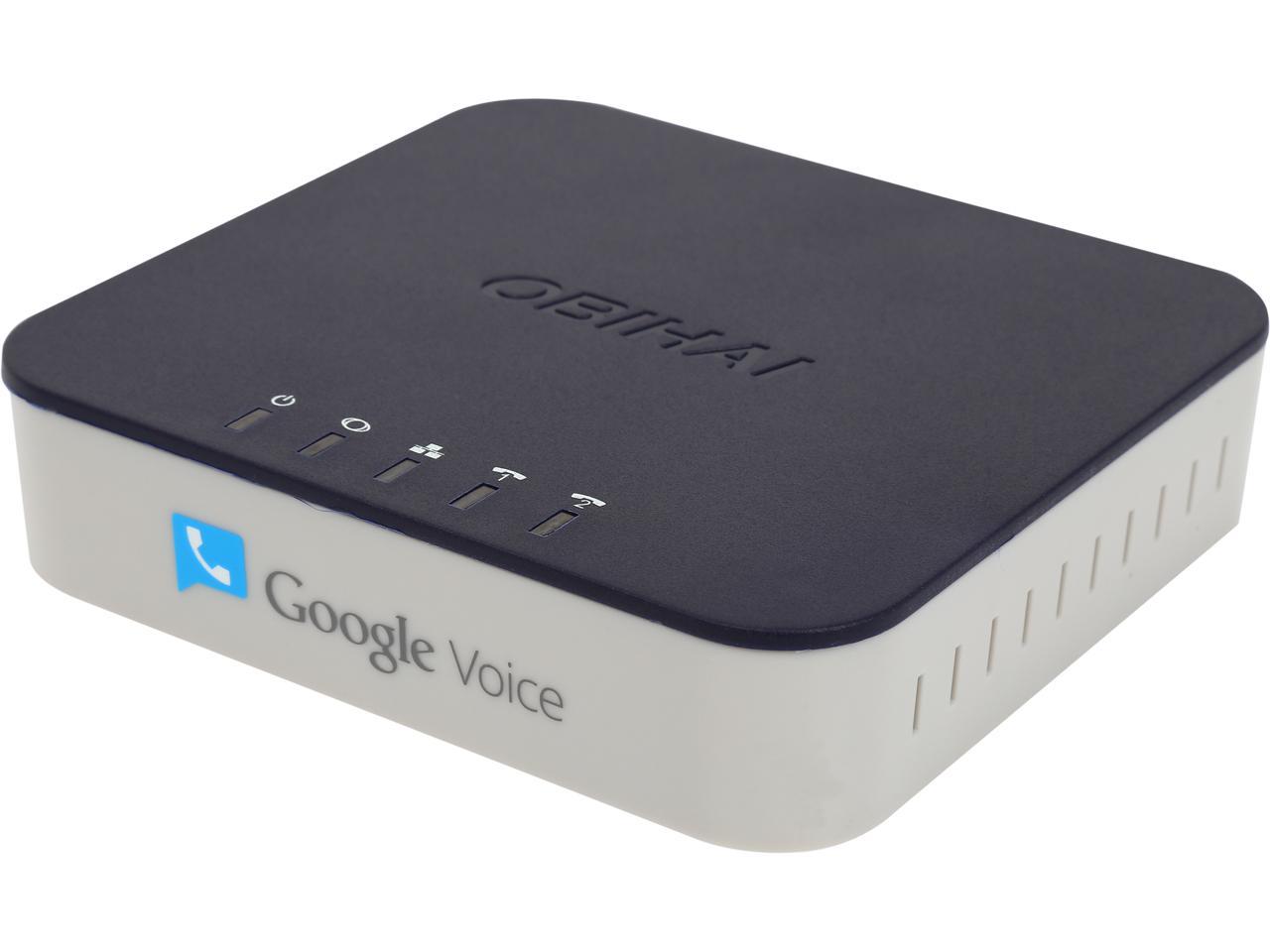 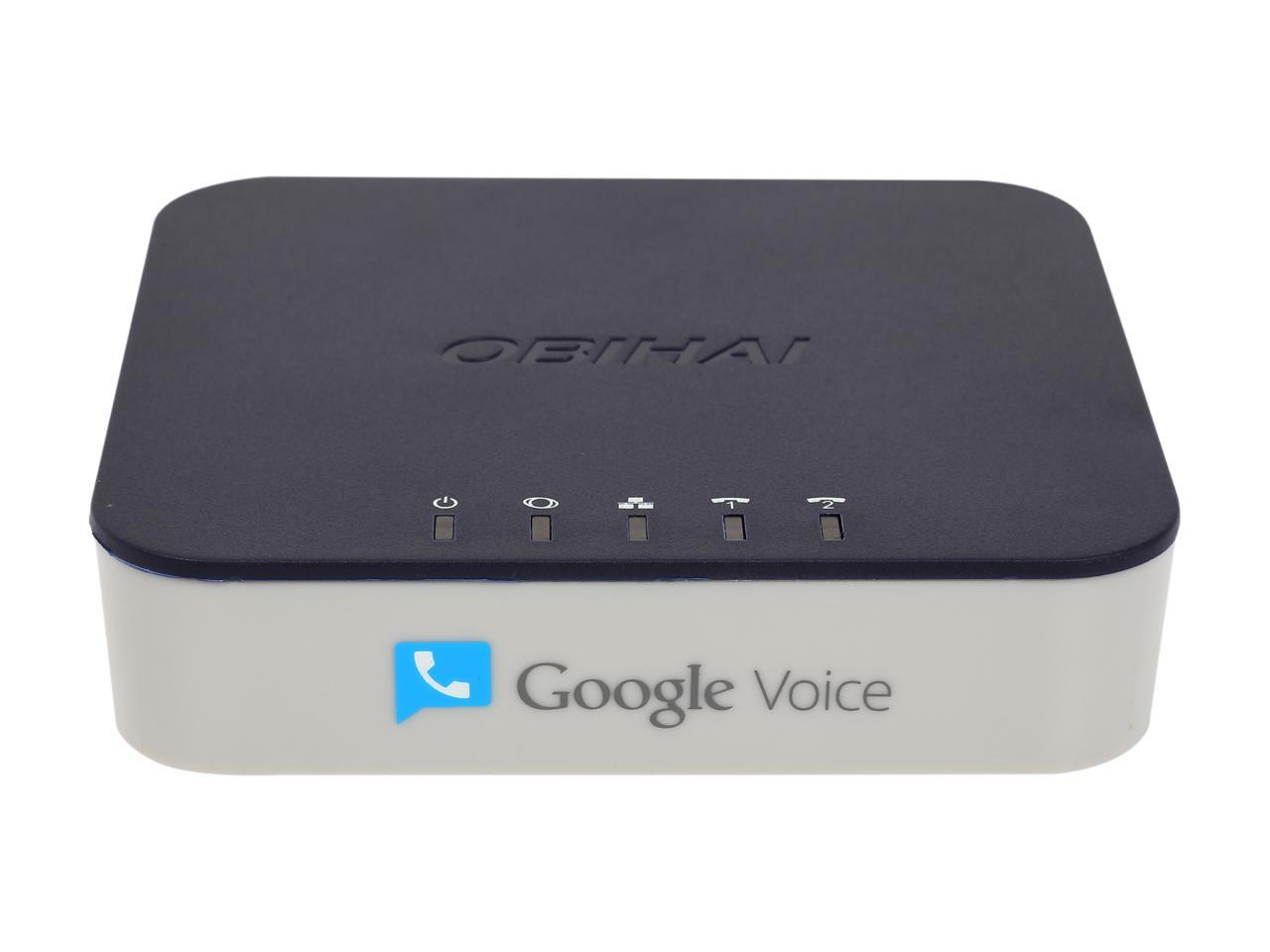 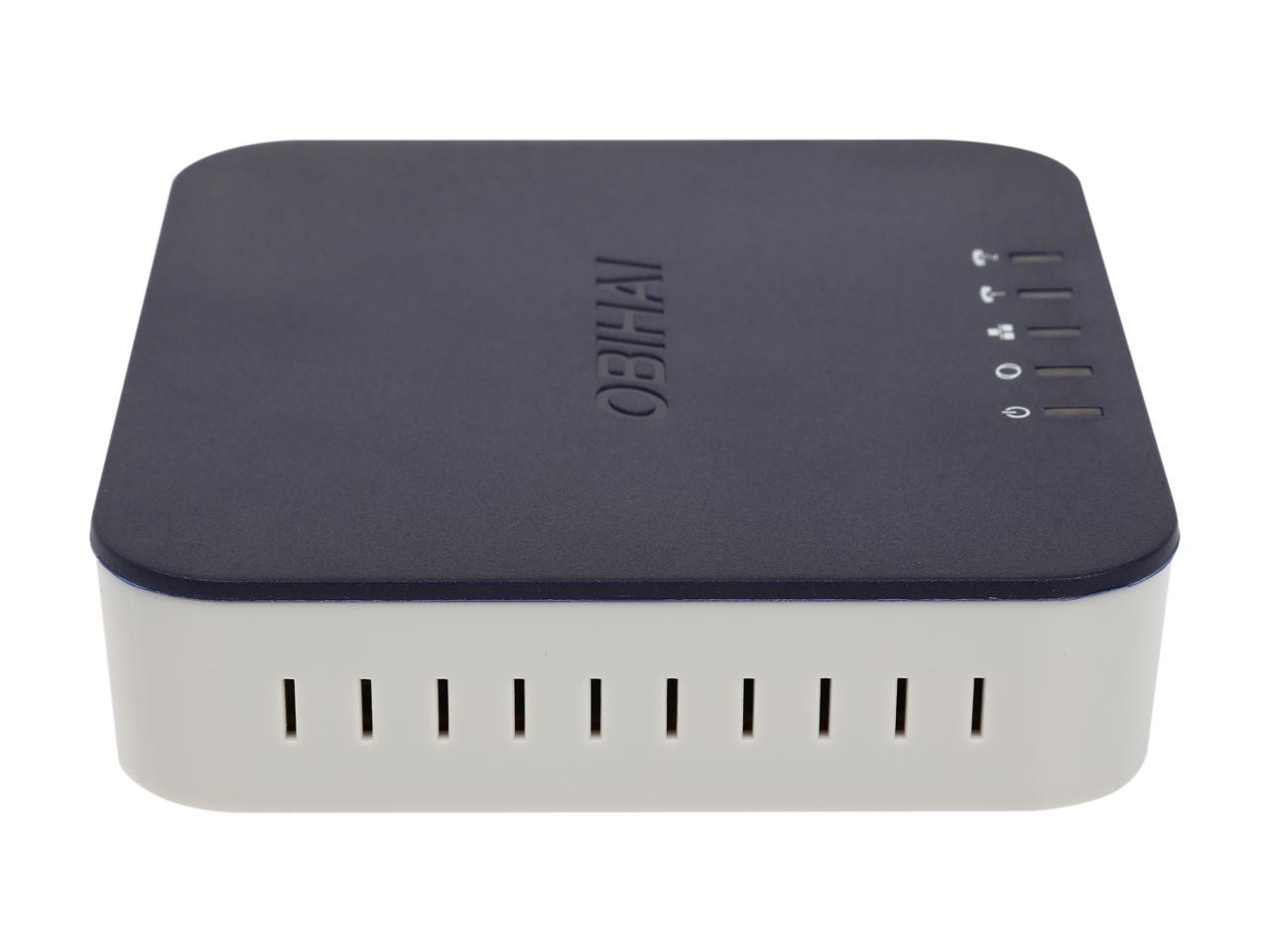 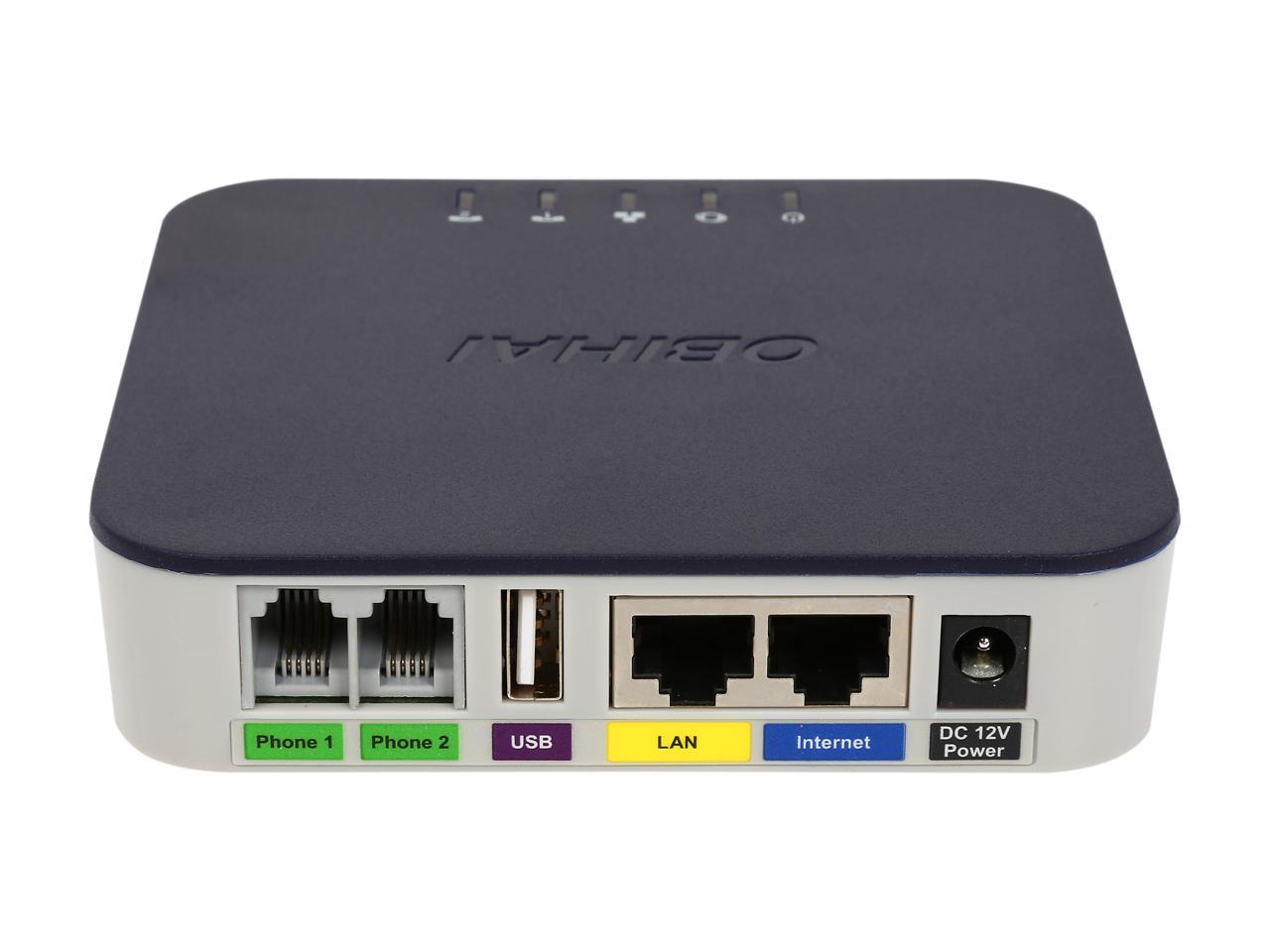 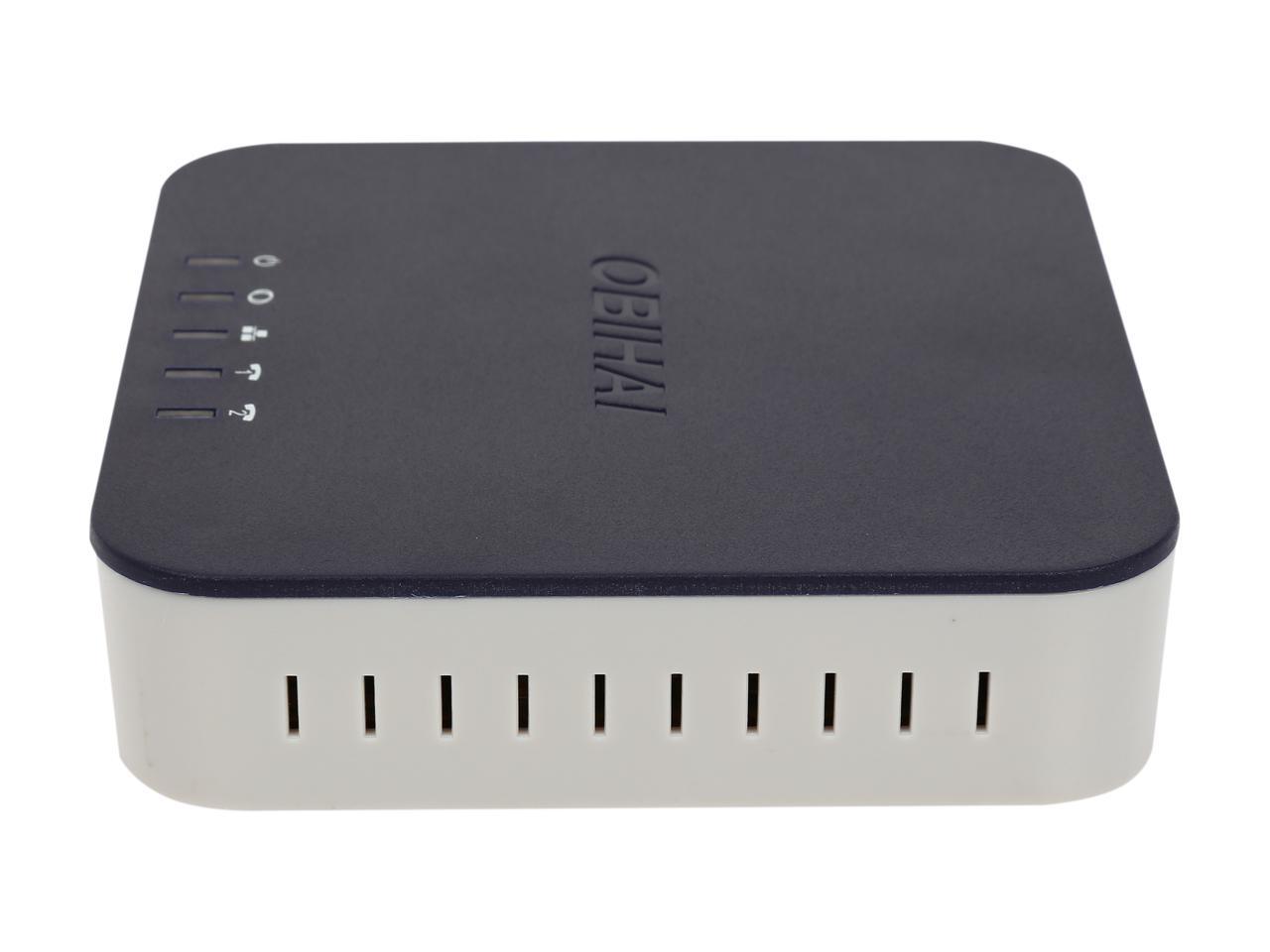 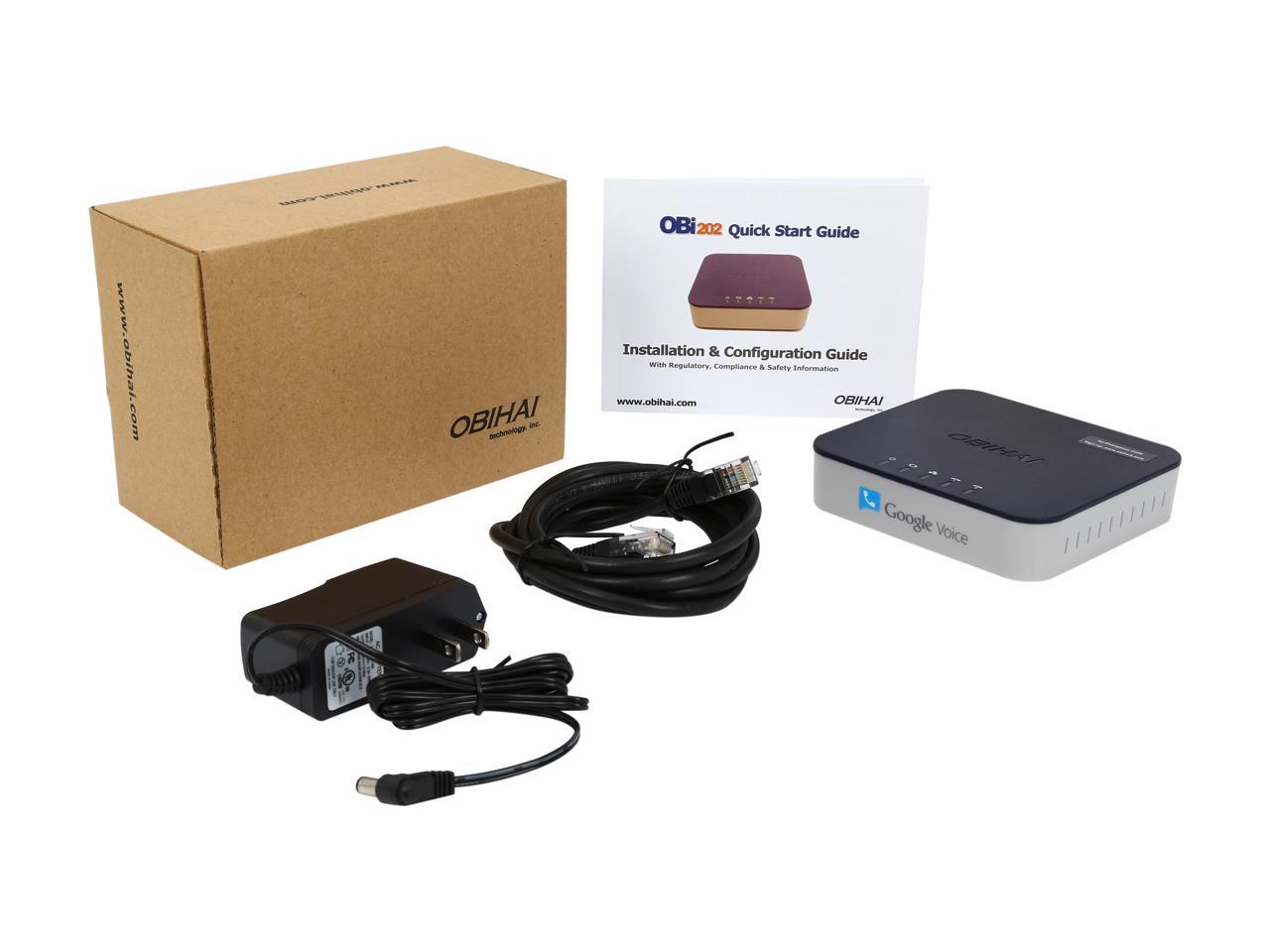 The Obi202 is designed for home and small business use. Via the OBi202’s two on-board phone connections as well as via the Internet to other OBi endpoints via Obihai’s free OBiTALK network or up to four (4) available VoIP services, you have the power to make and receive phone calls and faxes as well as bridge mobile, fixed line and Internet telephone services. It also offers integrated router and USB port.

The OBi202 is targeted at Internet phone service providers world-wide, as well as power-users of Google Voice and literally hundreds of Bring Your Own Device SIP services. The OBi202's innovation and sophistication in the areas of speech technology, voice traffic prioritization, call management and ease of set-up are catalysts that will ignite excitement among consumer and small business users who want the best product for their VoIP communication needs. Easy to Set Up and Use

Based on comments from Obihai customers, there have never before been VoIP devices that can be setup so easily and used immediately, with absolutely no prior technical knowledge of VoIP or voice & data networking by the end-user. The OBi202 is no different than its brothers, the well-reviewed and market-leading OBi100 and OBi110 VoIP phone adapters. When used in conjunction with the www.OBiTALK.com web portal, anyone can have an OBi up-and-running – making and receiving calls in minutes.

Phones connected to the OBi202’s 2-phone ports are able to access any of up-to-four (4) SIP or Google Voice services and the OBiTALK OBi-to-OBi calling network to make and receive free and low-cost calls from across town or to anywhere in the world.

A Mini-Phone System via Phone Collaboration

While the OBi202 phone ports can function independently with any of the available VoIP service providers and OBiTALK, the OBi202 also offers collaborative features which allow its phone ports to work together as a mini-phone system.

The user can dial a “#” key to call from one phone port to the other. Depending on the current state of the called phone, one of the following can happen:

- If the called phone is idle, it will ring normally with a Caller-ID indicating the call is coming from the phone connected to the other phone port of the same OBi202.

- If the called phone is already on a call, the calling phone can automatically join the call.

- If the called phone is on-hook with a call holding, the calling phone can pick up / resume the call.

- If the called phone is ringing, the calling phone will pick-up and answer the incoming call.

Service providers Vonage, MagicJack, Nettalk, Ooma and Skype (via FREETALK) do not currently support anything other than their own device, locked-down to only their service. Obihai devices, on the other hand, can be used with a multitude of services – actually four at the same time. The OBi202 can be used with any Internet phone service that supports the SIP open standard. For example, the OBi202 may be used with hundreds of Bring-Your-Own-Device service providers like; Anveo, Callcentric, VoicePulse, VoIP.ms. By using the www.OBiTALK.com web portal, customers can easily set-up the OBi202 with their BYOD service username and password. The OBi202 also supports the T.38 real time fax-over-IP standard protocol for reliable faxing over the Internet.

From the telephones connected to the OBi202, anyone can make free calls in the USA and Canada. Users may also receive calls to their Google Voice phone number(s) and get new / unheard voice message notifications on the phones attached to the OBi202. If outside the USA or Canada, users may still use their Gmail account with the OBi202 to place calls to over 150 destinations worldwide at incredibly low rates – For example; USA and Canada for 1? per minute, India, China and Hong Kong for 2¢ per minute. Up to four (4) Google Voice accounts may be configured on the OBi202.

The OBi202 is designed on-top of a powerful purpose-built processing platform. The OBi202 is equipped with a one-port Fast Ethernet router with firewall and integrated quality of service (QoS) that ensures voice conversations are prioritized on the network, before all other traffic.

The OBi202 USB port is designed to serve multiple purposes. Using the OBiWiFi Wireless Adapter, the OBi202 can be placed anywhere within range of an 802.11b/g/n access point. Or, the USB2.0 port can be connected to a storage device to enable local and remote access of digital files via the Internet by authorized users.

The OBi202 includes the ability to be managed by the OBiTALK cloud configuration service. From anyplace where there is an Internet connection, OBiTALK allows users to add OBi devices, configure VoIP accounts and share services amongst their own OBi endpoints and those of their trusted friends. In-service software updates are easily performed either automatically from the OBiTALK portal or by dialing ***6 from a phone attached to the OBi device.

With Obihai Zero-Touch provisioning (ZT), it is very easy for service providers to purchase OBi units in quantity and realize the benefits of touch-less provisioning to lower operational costs and speed-up customer deployments. OBi units provisioned via ZT can be fully customized so that the OBi factory default settings are those of the service provider and securely locked to the OBi device after initial power-up and ZT provisioning. Subsequent subscriber-targeted profile configurations can be directly served from the service provider’s network with security and reliability.

Complimentary to ZT, Obihai have a specialized web-portal for VoIP service providers. Via the portal, service provider support engineers can access each device individually to troubleshoot and configure specific parameter settings as well as set up and perform loop-back calls and other tests without requiring the end user subscriber’s assistance or intervention.

Pros: Once set up, this item is absolutely bullet proof. in the 8 months since purchase, it has worked flawlessly and has never needed be re-booted. Sound quality, using voip.ms is as good as my land-line. I am about to port my land-line to voip,ms

Cons: You really need to take some time reading the instructions before attempting to set this up.

Overall Review: I am about to buy another two of these excellent devices for friend and family!

Pros: this adapter works better than the magic jack and is always there when I need it. calls are clear with no problems whatsoever. excellent product, easy setup, free service.

Pros: This is my 4th OBI unit 1-100 2-110 and this the 202 all I can saw awesome. I have referred to many friends as well. Great product and OBI give very good e-mail support if needed. Call quality excellent and you can pick the unit up and as long as you have a internet connecting just plug in and it will work anywhere. The features as amazing. All you need is a service provider with OBI give recommendation for free and paid ones. I use both free=Google voice as well as paid which I use Phonepower again Excellent they only charge $60.00 for a full year unlimited service and if you need support Phonepower offer call free support what else can anyone ask for. Why paid cable or other company for the low side $25.00 a month to $60 month, when you can get the same quality for free to $60 a year. GREAT

Cons: May need little tech knowledge I stress the word may. most will need very little if any.

Overall Review: Up in running 15 to 30 minutes Just want to say Thank you for a great product.

Pros: Clear sound One time investment save 40$ a month

Cons: So far none.

Pros: Relatively easy to setup, free local and long-distance, works with fax machine, when paired with GV there are many options for ringing multiple phones at the same time and voicemail, sound is crystal clear.

Cons: It takes a few seconds between dialing your GV number and the phone to ring (3-5 seconds?). This isn't noticeable if you are dialing your GV number directly, but I set my cell phone up to forward calls to GV if I don't pickup after X seconds. The additional time makes people think that there is simply no answer and they hang up. Even the option of sending all calls to GV seems to take a bit too long (but that is probably my cell phone service's problem). It should be noted that none of this is likely the fault of the OBO box as much as it is the technology being used to connect to GV... even though it's a form of VOIP, it's still using the "chat" option for connections. In my case, it wasn't a big deal as I was just looking to add an outgoing phone/fax in my house without the need to pay for a landline.

Overall Review: I bought 2 of these - 1 to add an additional fax line at work. So far, so good as far as faxing goes! The other I am using at home mostly for testing purposes. They both do exactly what they are supposed to do. My existing GV number, which I have been using with misc phone apps to make calls via the internet while out of the country, went from in-the-box to working in less than 3 minutes. The second line took a bit longer as I needed to setup a Gmail account in addition to doing all of the initial configurations of GV prior to use. If you have no experience with GV and VOIP technology, the initial setup could be a bit confusing, but there is enough help on the OBI web site to work through any problems. Normally I say "you get what you pay for," but in this case.... I am more than satisfied with the free service I am receiving. As long as GV remains free, the total cost to set this up and keep running is probably the cost of installation of a land line and 1 month's phone bill! - How can you possibly go wrong?

Pros: Free Phone that works just like the one you have at home!!

Cons: A little difficult to hookup, need a little technical knowledge of how house phones work unless your a good youtuber

Pros: I've got it to use for my home phone. Works nice. Simple enough to install for non experts and at the same time has a lot of options under hood for experts. I am very satisfied with it, no complains at all. As since I am tired to pay super-over-priced fees to communication monster companies I set up VoIP line so this equipment handles all my home phone needs.