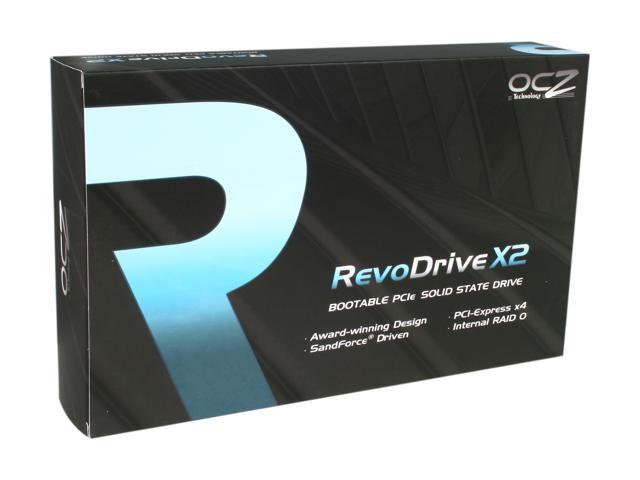 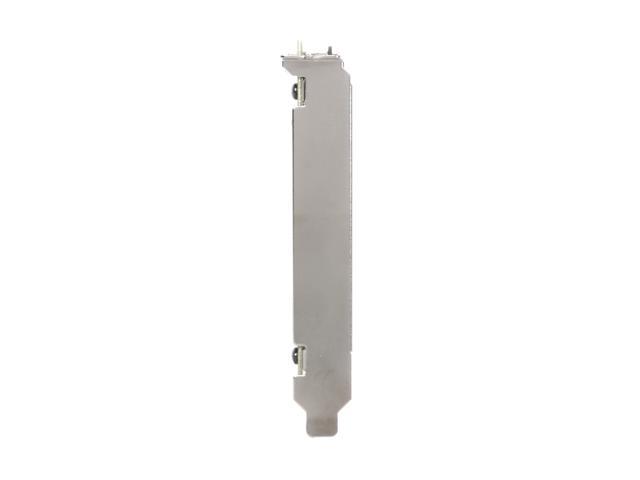 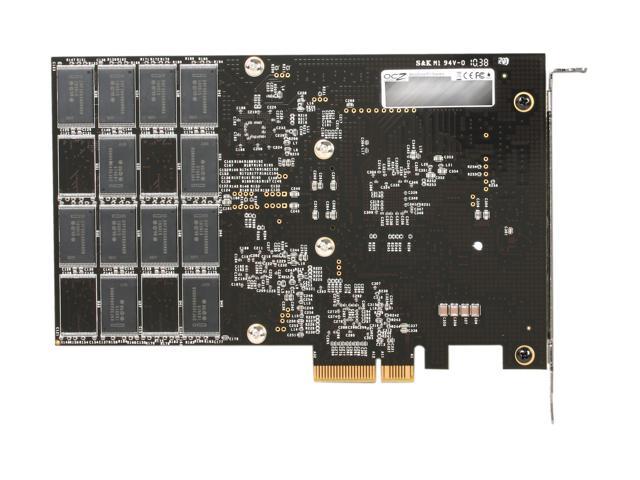 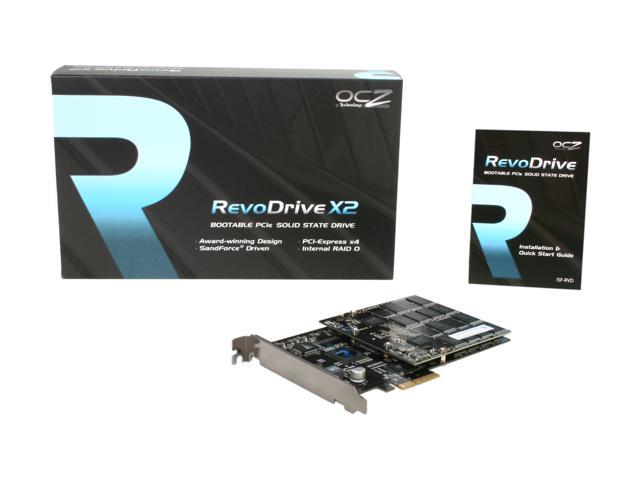 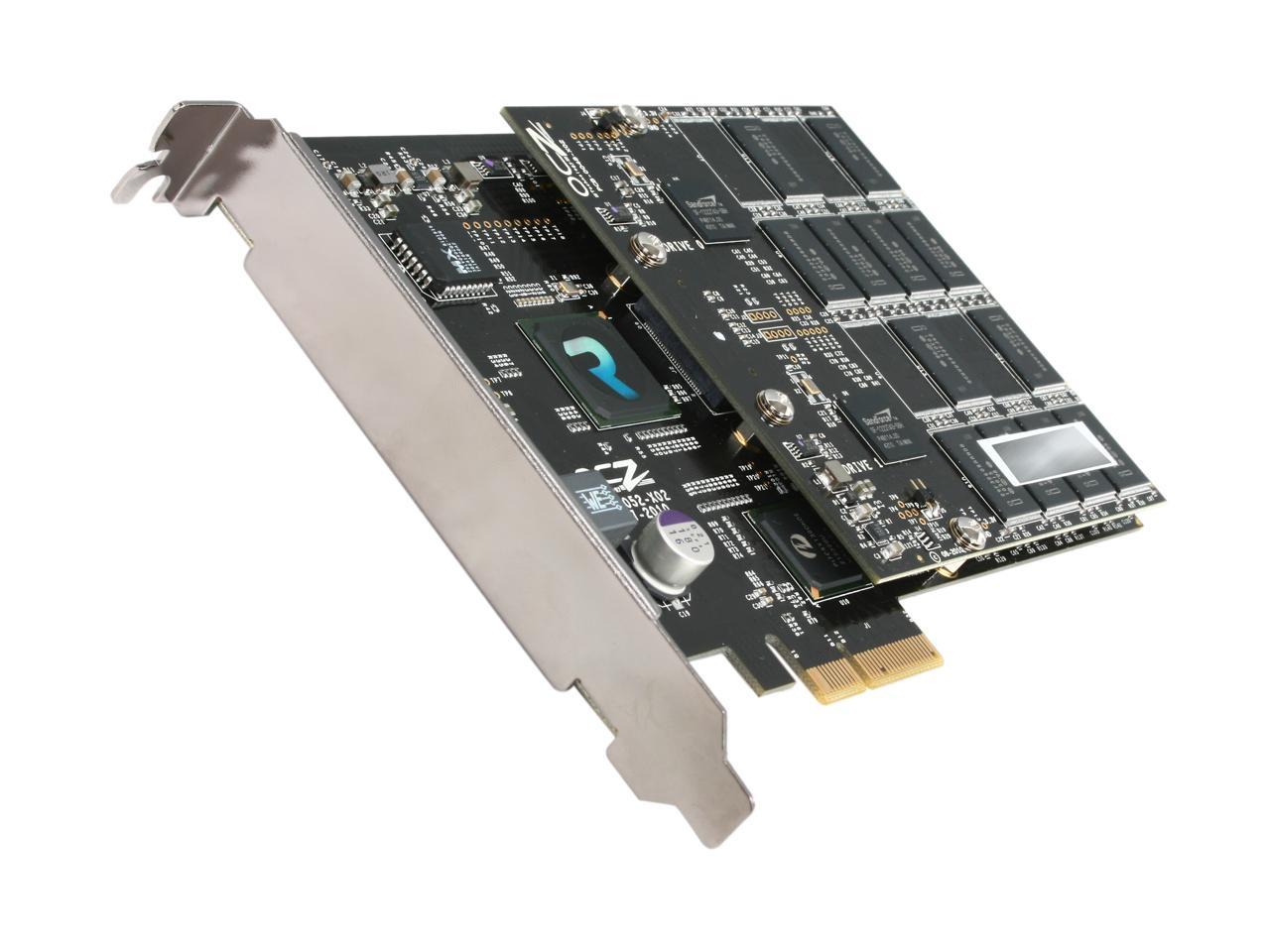 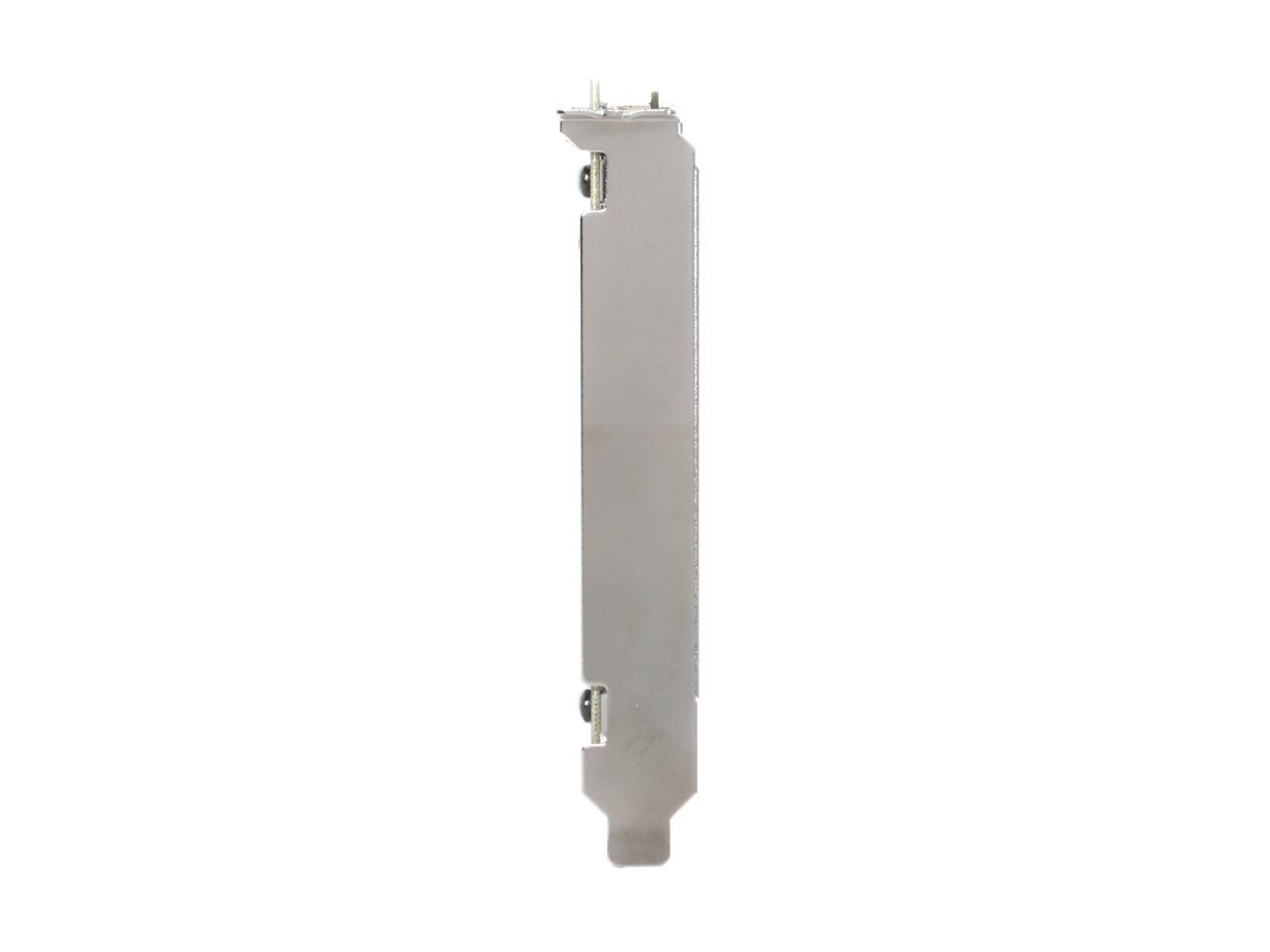 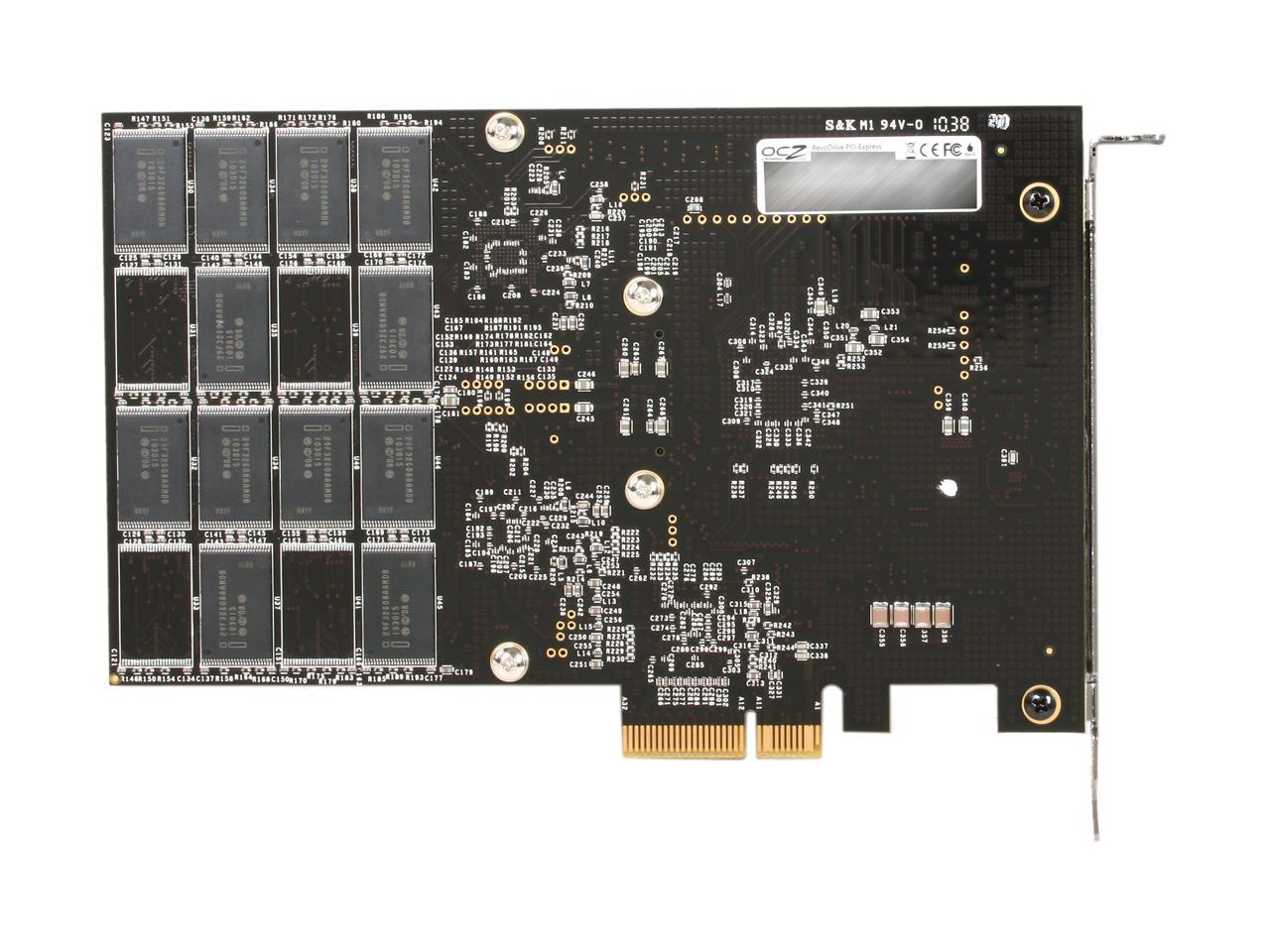 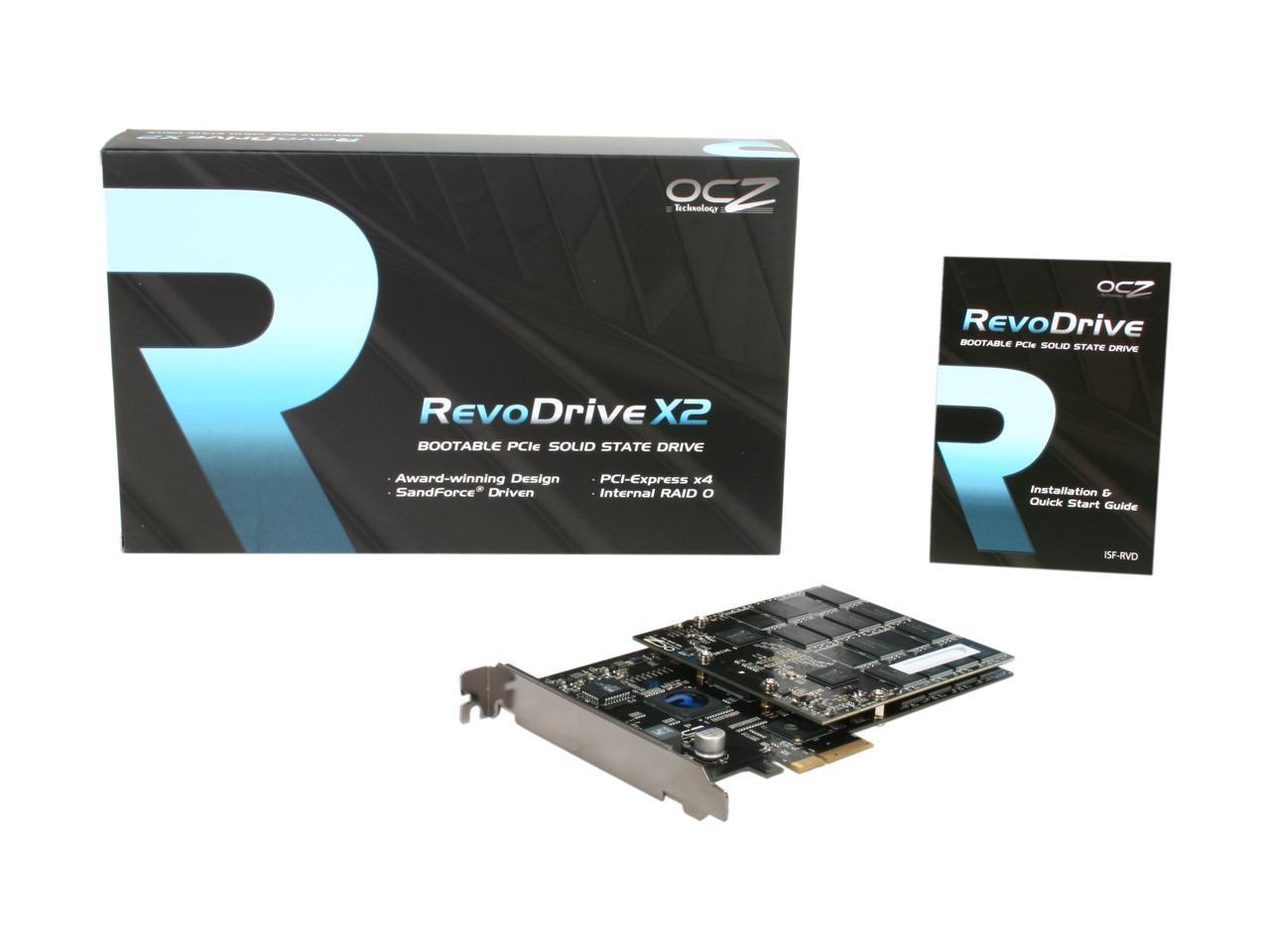 (37) Write a Review
OUT OF STOCK.
Overview
Specs
Reviews
Building off the award-winning RevoDrive, the OCZ RevoDrive X2 takes performance to new heights while doubling the storage capacity for the ultimate PC experience. With a proprietary four-way RAID 0 design, the RevoDrive X2 enhances data access and maximizes bandwidth with superior data rates up to 740MB/s and up to 120,000 IOPS, nearly triple the throughput of other consumer SSDs. Unlike competing PCIe solutions, the RevoDrive X2 is bootable ensuring quicker boot-ups in addition to snappier application loading and file management. The RevoDrive X2 can accommodate a wide range of computing environments such as video-editing and other multi-media creation and management, all while providing the superior durability and reliability of SSDs.

Pros: Click on a document icon and it *instantly* appears on your screen. No humanly measurable lag.

Cons: Two issues: (1) not fully compatible with all motherboard BIOS'es - in my Asus P6X58D, I had the choice of losing RAID functionality in the primary(3GB/s) SATA controller -OR- losing the 6Gb SATA controller altogether. Trolling the OCZ forums ahead of time, I was aware of the issue. (2) Runs pretty warm. In my water cooled system, it's about the only thing generating heat - worried me enough that I placed the only fan in my system such that it blows right over the device. (Noise is an issue fo me - the liquid cooling pipes to a radiator outside the room)

Overall Review: I did *not* do a clean install to this device, I mirrored an already existing SDD to it and had ZERO issues rebooting via the device. The bios compatiblity problem is not really OCZ's fault. to have to deal with the miriad of BIOS flavors out there is not reasonable. However, buyer beware - read the ocz forums. Some sort of thermal management built onto the device would be nice. A set of heat pipes to a heatsink where a liquid cooling block could be attached perhaps?

Cons: Installation can be tricky for a PCI-E SSD as a boot disk: turn off Windows 7’s PCI-e Link State power management to prevent the OS from shutting down the drive while in use

Overall Review: Bought this for my desktop to replace and aging RAID-0 WD Raptor set. This blows it out of the water.

Pros: This card is incredible fast, im really happy with it. went from a cheep 1tb sata 3 HD for my OS, to this. VERY NICE UPGRADE. very happy i got it. I think i found this on sale for low 300's dont recall what i payed, few months ago.

Cons: cost, i did get it on sale, sale w coupon, its still a bit pricey, but thats what u pay for amazing gear, shame its out of stock right now, you should all buy it! lol

Overall Review: so i noticed a few people had problems with install, i would have too but i looked into it before i got. Found that with my board, the MSI 890FXA-GD70, i needed a bios update for it to work. i believe it was that was not yet an official release, thats how new it was, tried without for kicks, gave me errors not letting windows install. after update, no problem at all, have had for at least 3 months now, no problems at all. so its a great card, just takes some looking into to set up.

Overall Review: The cost is high, but you get the bang for the buck$ Windows Experience Index on drive 7.9 windows 7 64 bit

Overall Review: MUSTS 1) physically install 2) download driver from ocz, even win 7 wont automatically upate it yet 3) go to device manager and find raid device and install driver Get a version of windows with SP1 or it will tell you that you have some kind of driver/installation problem issue I wasted 4 hours going crazy due to this. (Im willing to bet everyone here that couldnt get it to work - this was the reason why) 4) install windows 7 from usb device, or from mounted cd on hard drive, - virtual cd or regular CD 5) Mine wont boot if i have the revo/raid device listed as the primary boot device, so also try it as 2nd or 3rd. WIsh it was cheaper and i had it sooner.

Pros: Installation was fast and simple. It's a lot faster installing a component into a PCI-E slot than a drive bay. Not needing an interface cable is icing on the cake. I disable disk sleep timers in my builds anyway so never experienced mentioned sleep issues. OS install took minutes and everything screams. Most apps are finished launching by the time I'm done clicking. The exception are huge photo and graphic apps that still fire up about 3 to 4 times faster than they did from spinning disks. As a beyond practical use test I ran a Security Essentials, Malware Bytes, and Spybot S&D full scans simultaneously and was still able to use a variety of programs with no evident lag.

Cons: No documentation I've found points to a drive activity LED jumper on the card. While the card does have access indication lights on the PCB, I'd like to be able to see that indication on my machine case. Oh - Certainly not a fault with this product but - it makes my other machine with a striped pair of WD Velociraptors seem kind of "laggy"

Overall Review: If you don't know what "F6 driver installation" means then you should probably seek assistance. Anyone with 2 cents worth of IT experience can talk you through this in minutes. Folks complaining about the lack of installation media - well people that use the drivers that ship with hardware instead of downloading current versions from the manufacturers are noobs. Also - For those complaining about Win7 Installation sizes and SSD drive costs - I have Win7 64 Bit SP1, Office Pro 2010, Adobe CS5 Design Premium, and a few other substantial programs installed and only taking up about 28 Gig. Plenty of spare room on this 160 Gig drive. Tips - Turn off hibernation (powercfg.exe -h off), Get enough RAM to allow you bring the page file down to about 1 gig, after SP1 run the image cleanup utility (dism /online /cleanup-image /spsuperseded) to remove the pre SP1 backup files.

Pros: As advertised, this drive is super fast. I use it to load graphics and gaming software since I am currently unable to use it as a boot drive.

Overall Review: OCZ Support offers a helpful forum with possible work-arounds for PCI-E booting... I ordered my Mobo after a few posts offered hopeful signs, but found the OCZ list of NON-SUPPORTED MOBOS after I had already seated the Crosshair into the case.