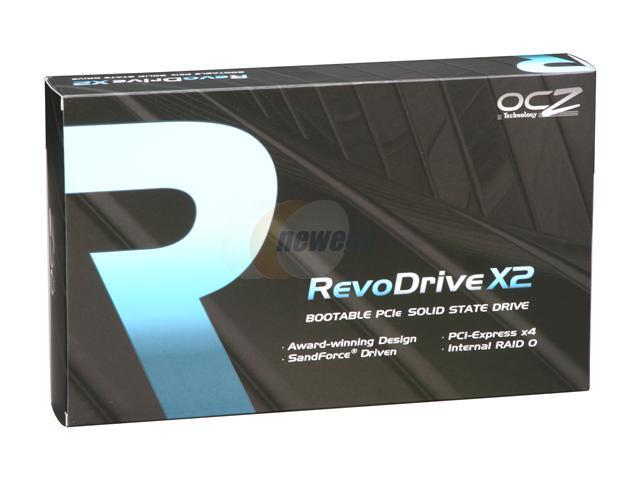 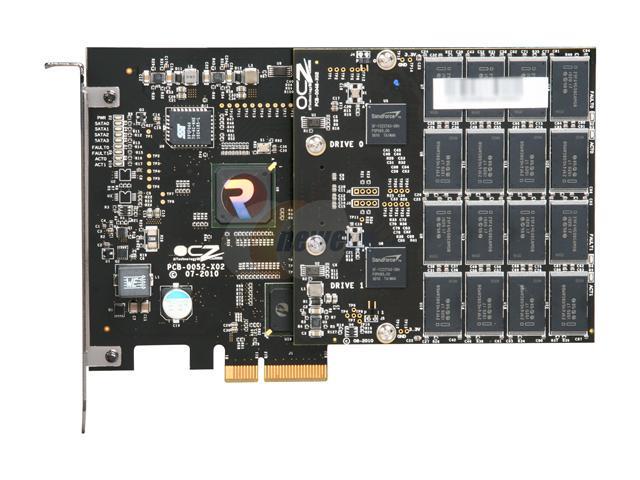 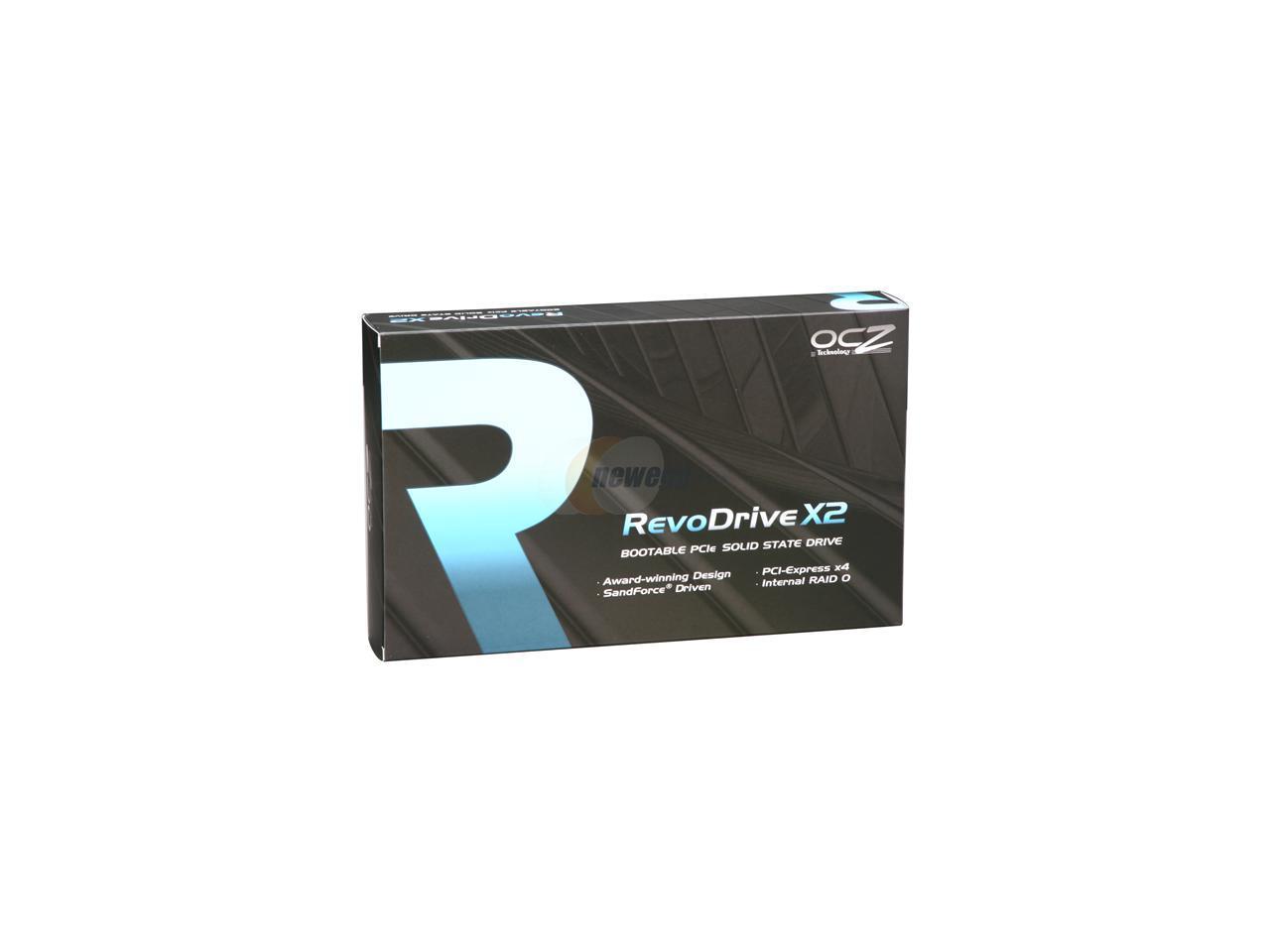 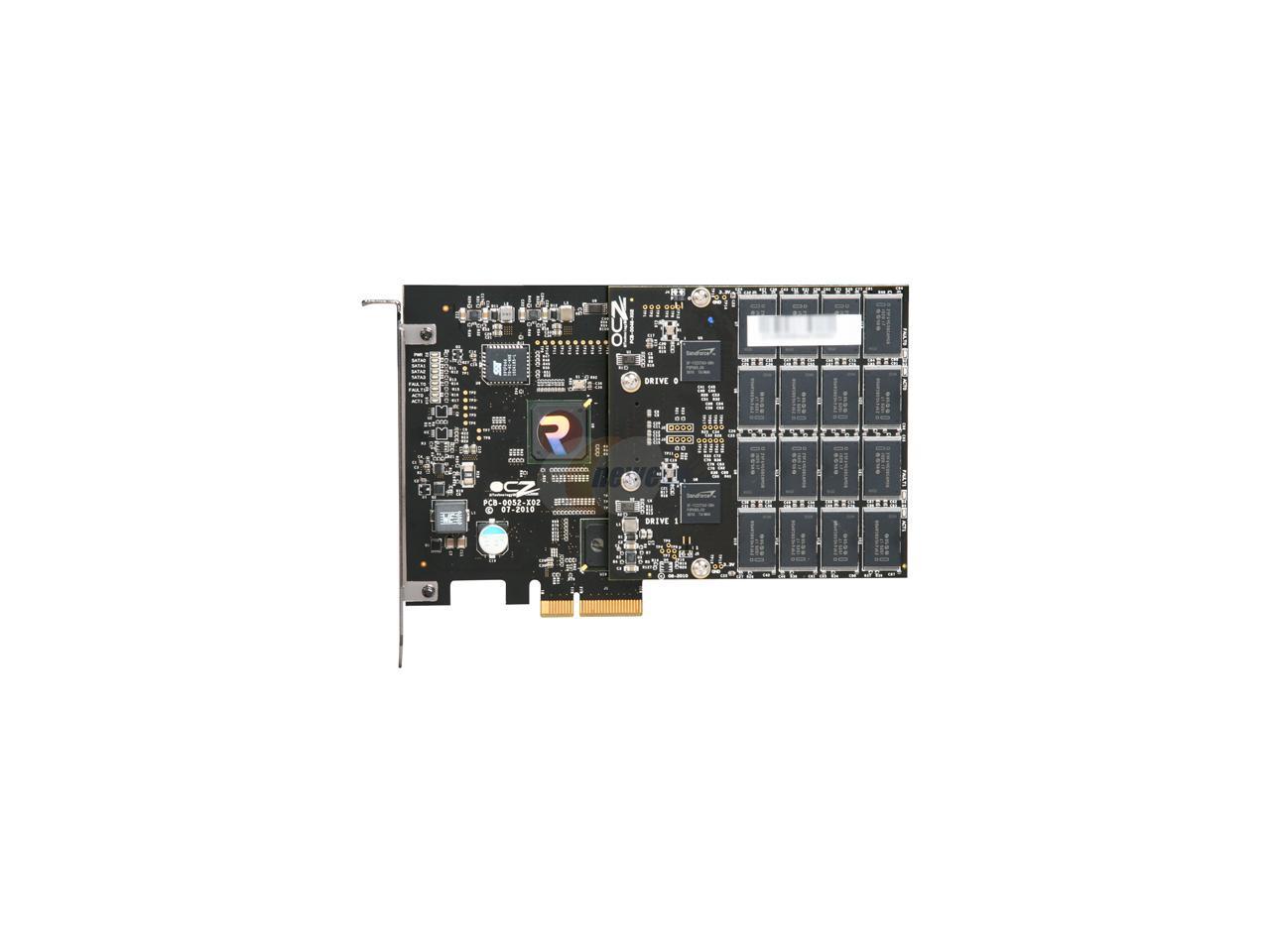 (6) Write a Review
OUT OF STOCK.
Overview
Specs
Reviews
Building off the award-winning RevoDrive, the OCZ RevoDrive X2 takes performance to new heights while doubling the storage capacity for the ultimate PC experience. With a proprietary four-way RAID 0 design, the RevoDrive X2 enhances data access and maximizes bandwidth with superior data rates up to 740MB/s and up to 120,000 IOPS, nearly triple the throughput of other consumer SSDs. Unlike competing PCIe solutions, the RevoDrive X2 is bootable ensuring quicker boot-ups in addition to snappier application loading and file management. The RevoDrive X2 can accommodate a wide range of computing environments such as video-editing and other multi-media creation and management, all while providing the superior durability and reliability of SSDs.

Pros: I went from having 2 Intel 160 SSD's on a X58 (EVGA SLI) in a raid 0 to this as my primary drive. Much faster perfromance on all the benchmarks. In day, to day it is hard to tell much of a difference. Overall a very easy to use and nice product. This is much easier to install and use instead of 4 SSD drives and a raid controller for users who have not worked with raid before - this is raid 0).

Cons: Not sure if this is really a con, but the firmware on the controllers is not user updatable.

Pros: Very fast performance. Needs extra drivers for Windows installation, but easily found on OCZ's site. Works in Linux, but shows up as 4 separate 120G drives. They can be assembled with dmraid though.

Cons: Had several units fail after a short time; probably a 35-45% fail rate. OCZ warranty process was difficult as they had no replacement units available for advanced replacement and they also didn't process incoming RAs every day. One brand new sealed box unit was received with an incorrect daughter board that had 2 90G modules instead of the correct 120G modules.

Overall Review: These cards just don't seem reliable. If they can get their quality up it seems like a potentially nice product.

Pros: When I first installed this thing and ran a couple bench marks I could have not been happier.

Cons: Then things started downhill real fast. I could boot from the drive,but Win7 could not see it. Figure that one out. I couldn't after spending many hours on the phone with OCZ tech support I was told I may have a bad drive, no kidding.

Overall Review: Sure wish this drive worked because when it did it was bullet quick. Maybe in a year or so I will get another they will be cheaper and may work!!

Pros: Very fast. Gets over 700 MB/sec for large block reads/writes. Does not require additional SATA connections/cables or space to mount additional drives.

Cons: I tried this thing in three computers. It worked fine in the first computer, although I didn't try booting from it. I was going to use it in my new dual hex-core machine as a boot drive. Windows 7 installation was impossible with their drivers (which you must download from the OCZ website). Once I managed to get the Windows installer to recognize the drive, but the system crashed during installation. I finally got a successful installation by cloning another drive. Now I get blue screens all the time, most of the time before the computer even boots. I tried to use it as a storage drive instead of a boot drive and had a problem where the drive would disappear and then reappear over and over again, making the computer unusable.

Overall Review: I am now using a 480 GB OCZ vertex 2 (3.5") as the primary boot drive and have no problems with that at all. I have also had tons of problems with the OCZ Colossus Series. It seems any time OCZ uses an internal raid on their products, the product is junk. I use a 60 GB Agility as the boot drive in my home machine and love it. A co-worker uses a 120 GB Vertex 2 (2.5" ) and has no problems. Stay away from the RevoDrive.

Manufacturer Response:
Hello, we are very sorry that you have been having difficulties. Please visit our support forums at the link below. We will be happy to assist you with resolving these issues. Thank you

Pros: I boot from my 720Gb RevoDrive SSD and it was a no hassle installation of the 64bit Win7 Os and once I figured out that Diskeeper (all versions) was providing my blue screens of death, I have had NO PROBLEMS. This board is very stable as I have been using it for a few months now. I have timed the following OS's as fully loaded VM's (VmWare WS 7) and ready to use: 64bit Ubuntu 10.10 @ 8seconds & Win7 64bit @ 13seconds. My RevoDrives are on an Asus Rampage III Extreme Mobo, Mem=4Gb sticks X 6 = 24Gb of Viper II Series, Sector 7 Edition DDR3 2000MHz, Cpu=Intel i7-980X. Short load times for programs and very large graphic file renderings is mind bending. This product is a MUST HAVE for Gamers, Desktop Publishing, Home based Servers of any kind or Technology Aficionados & Speed Fanatics like me. I smile so much now when using my machine! Thanks OCZ!

Cons: Current Pricing!, this technology should be priced for the masses. Sell more-make more!, why not.

Overall Review: I will be purchasing the OCZ Z-Drive R3 p84 PCI-Express SSD (OCZSSDPX-ZD3P841.2T) within the next few to several months and I will let you know how that works out, I am expecting more thrill with this (SSD) purchase than I am experiencing at the moment with my 720 & 480Gb SSDs. Hey OCZ! would you be interested in providing this SSD to an old guy who would test it and speak out about it merits? LoL, just an offer.

Pros: I have 2 OCZ RevoDrives, 1-480gb and 1-720gb (purchased elsewere) on my Asus RampageIII Extreme Mobo and I have sustained read/write speeds at an average of 519MB/s between cards with data moves of 10gb+ to verify speeds. These cards are amazing and if you can imagine booting Win7 native in 6sec after post. This card is the real deal.

Cons: Price and I cannot find a disk/data optimizer that will work with these cards without leading to the blue screen of death including the newest Diskeeper utility.

Overall Review: If you are a gamer than this is a no brainer along with a smoking video card sli set up, mobo and cpu. My Windows user experience rating is reported at 7.9 on the RevoDrives