Purchases from these Sellers are generally covered under our Newegg Marketplace Guarantee.
8,967 Ratings (91% Positive)
Shipped by Newegg
Sold by: 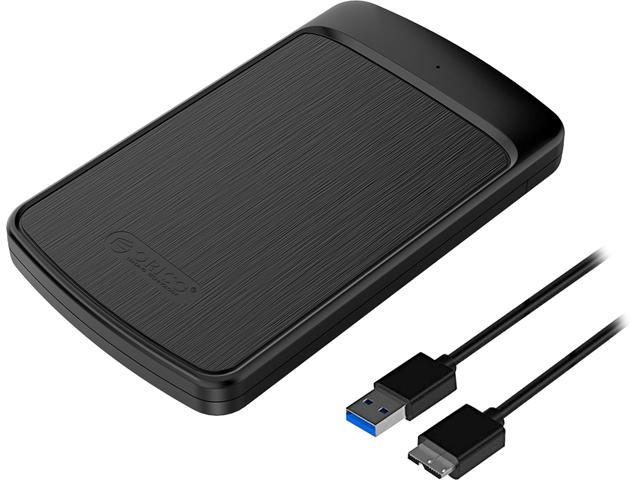 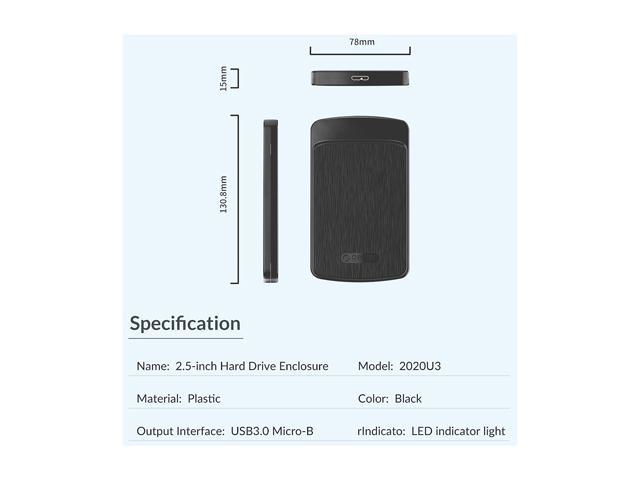 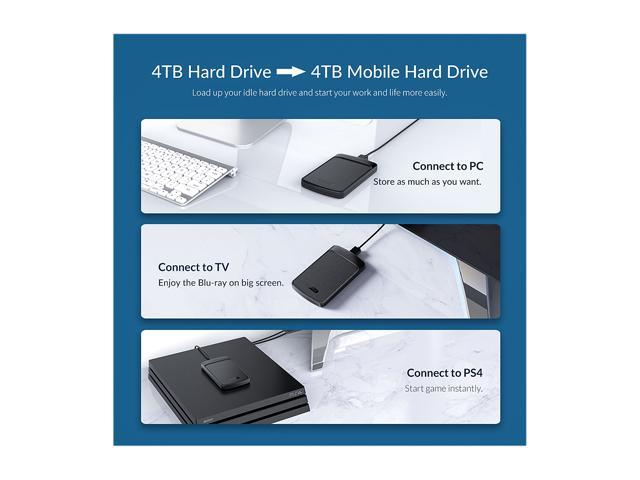 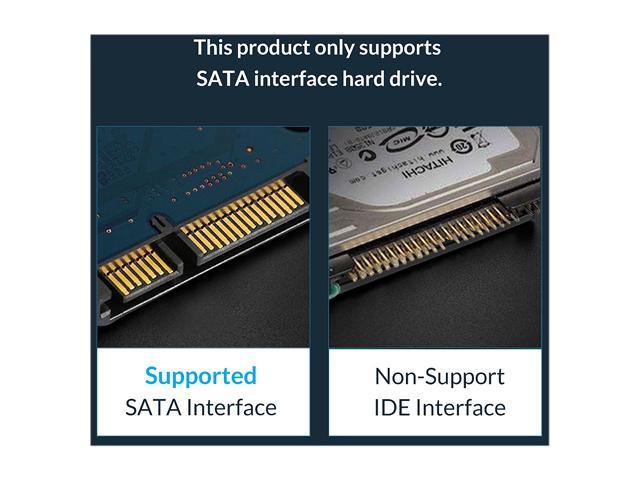 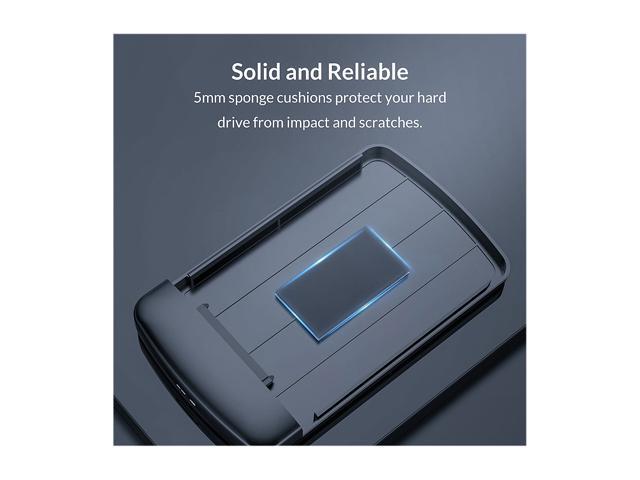 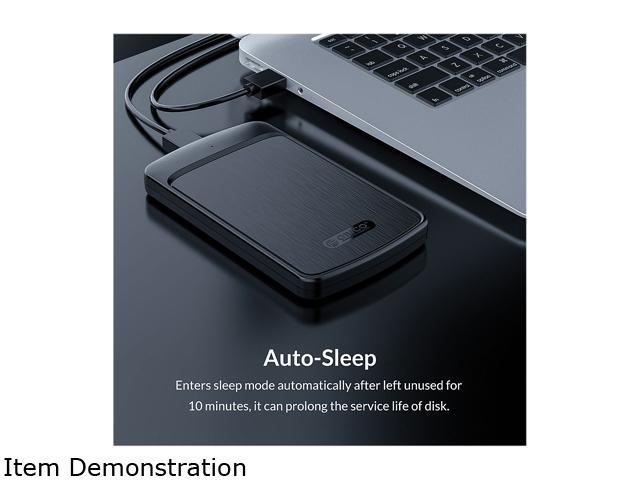 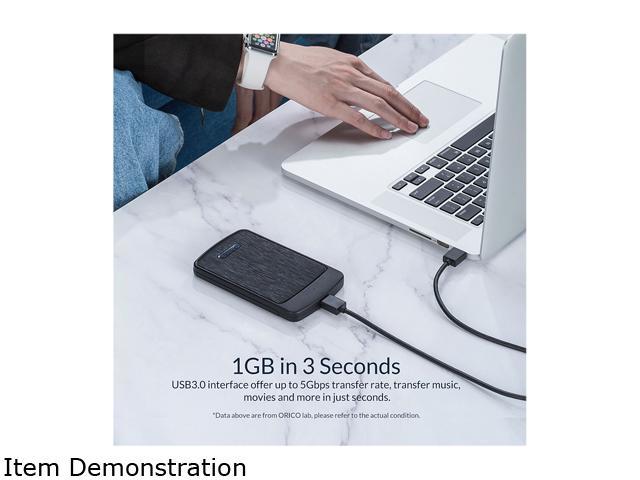 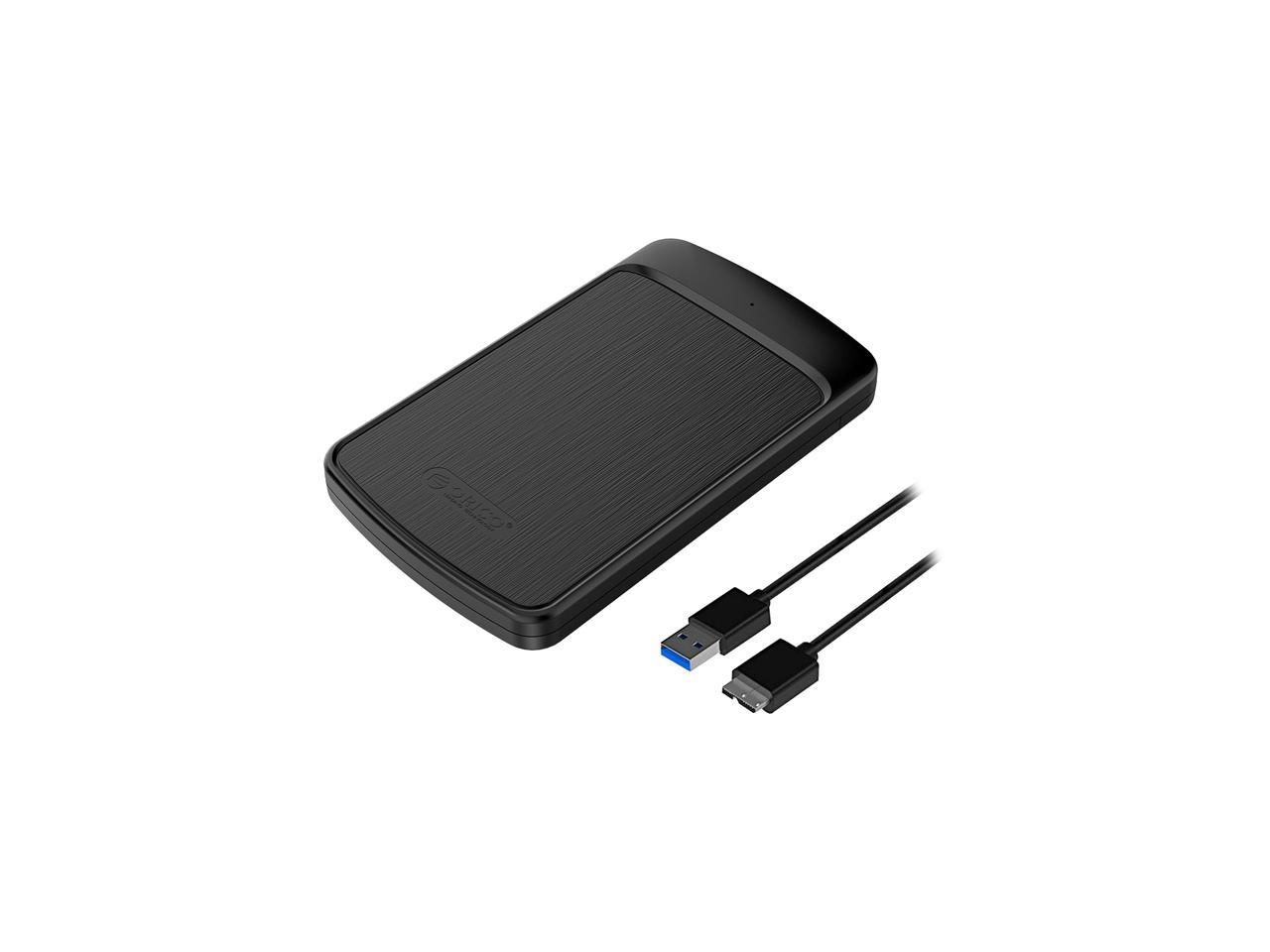 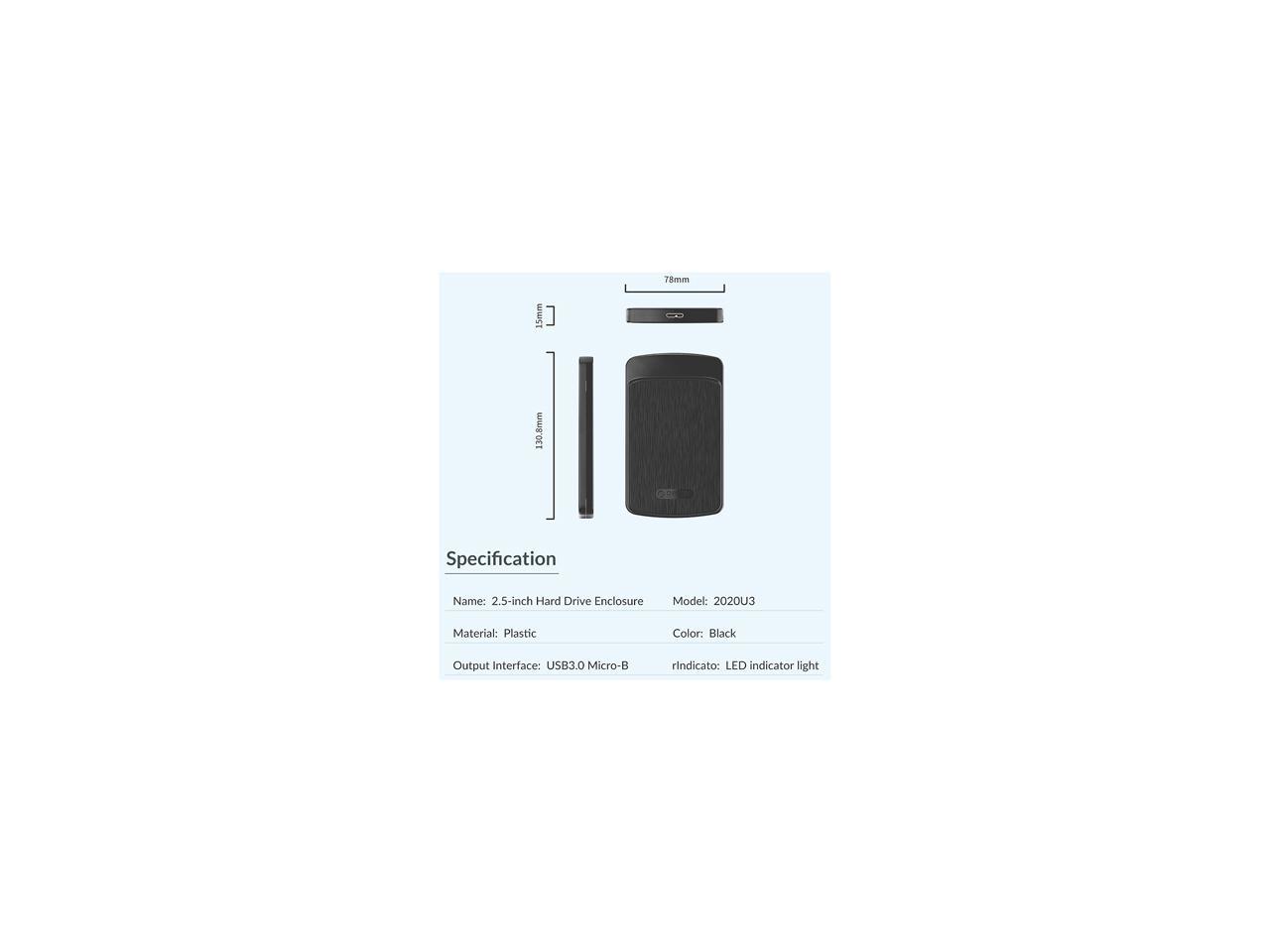 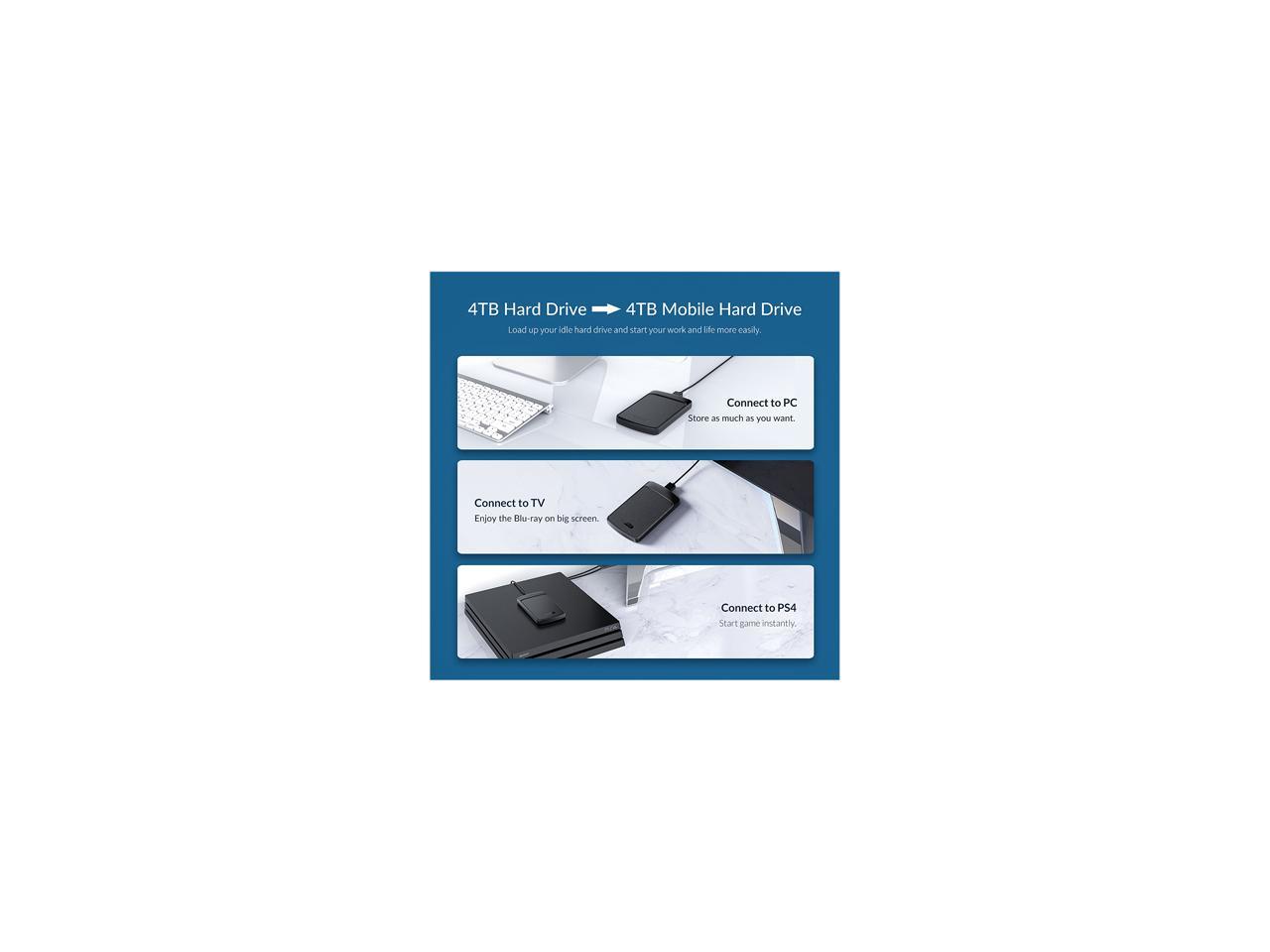 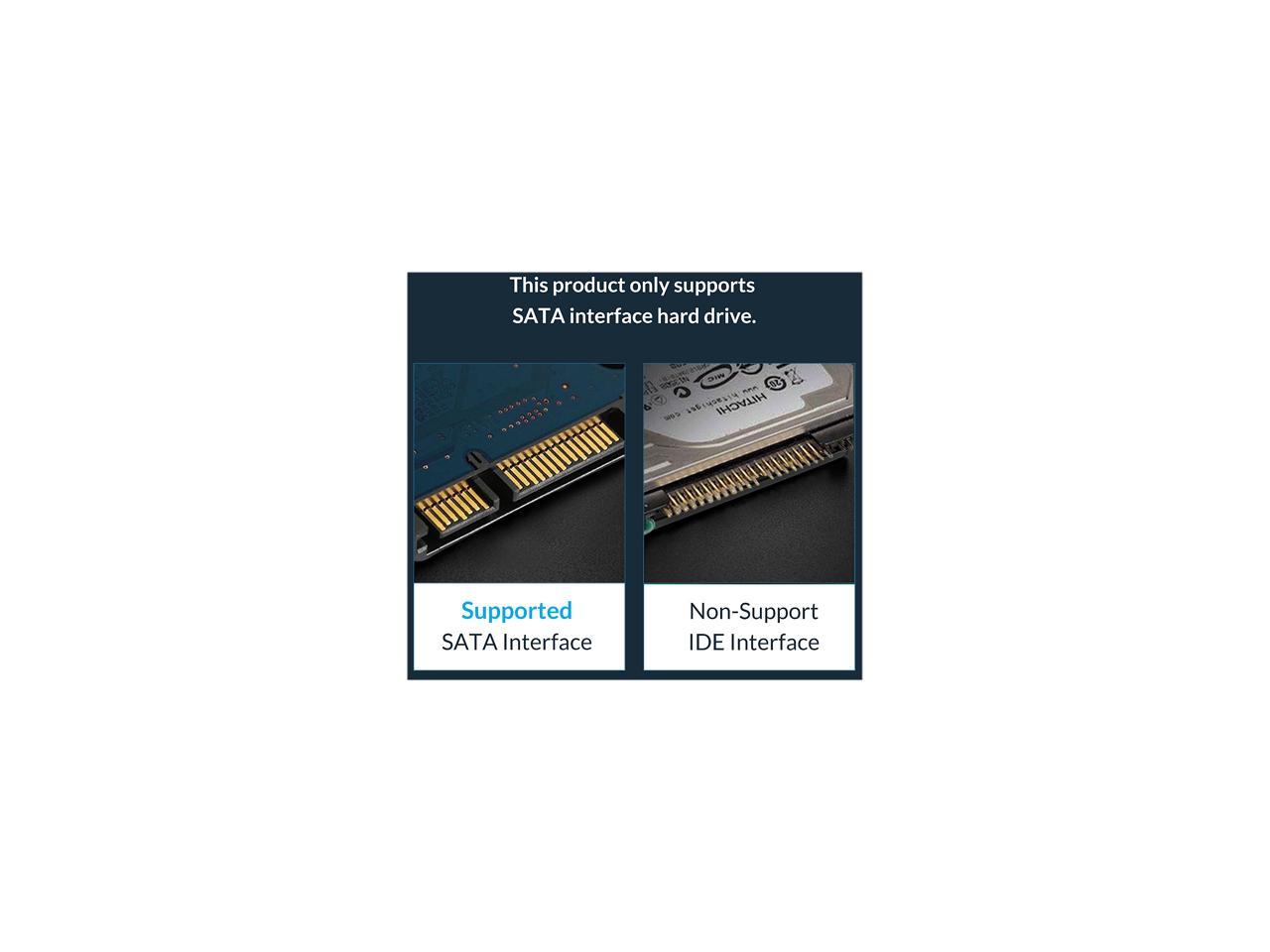 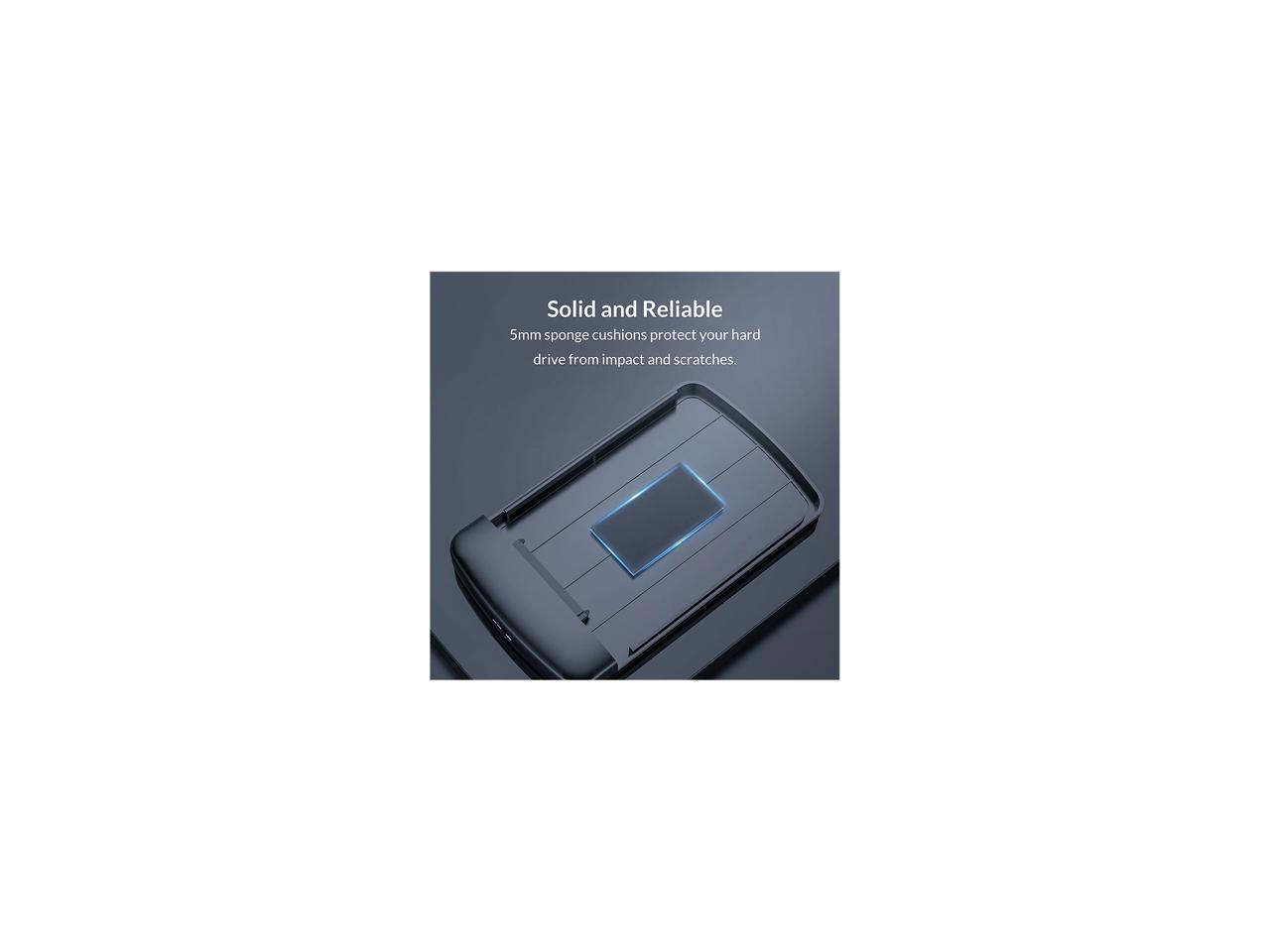 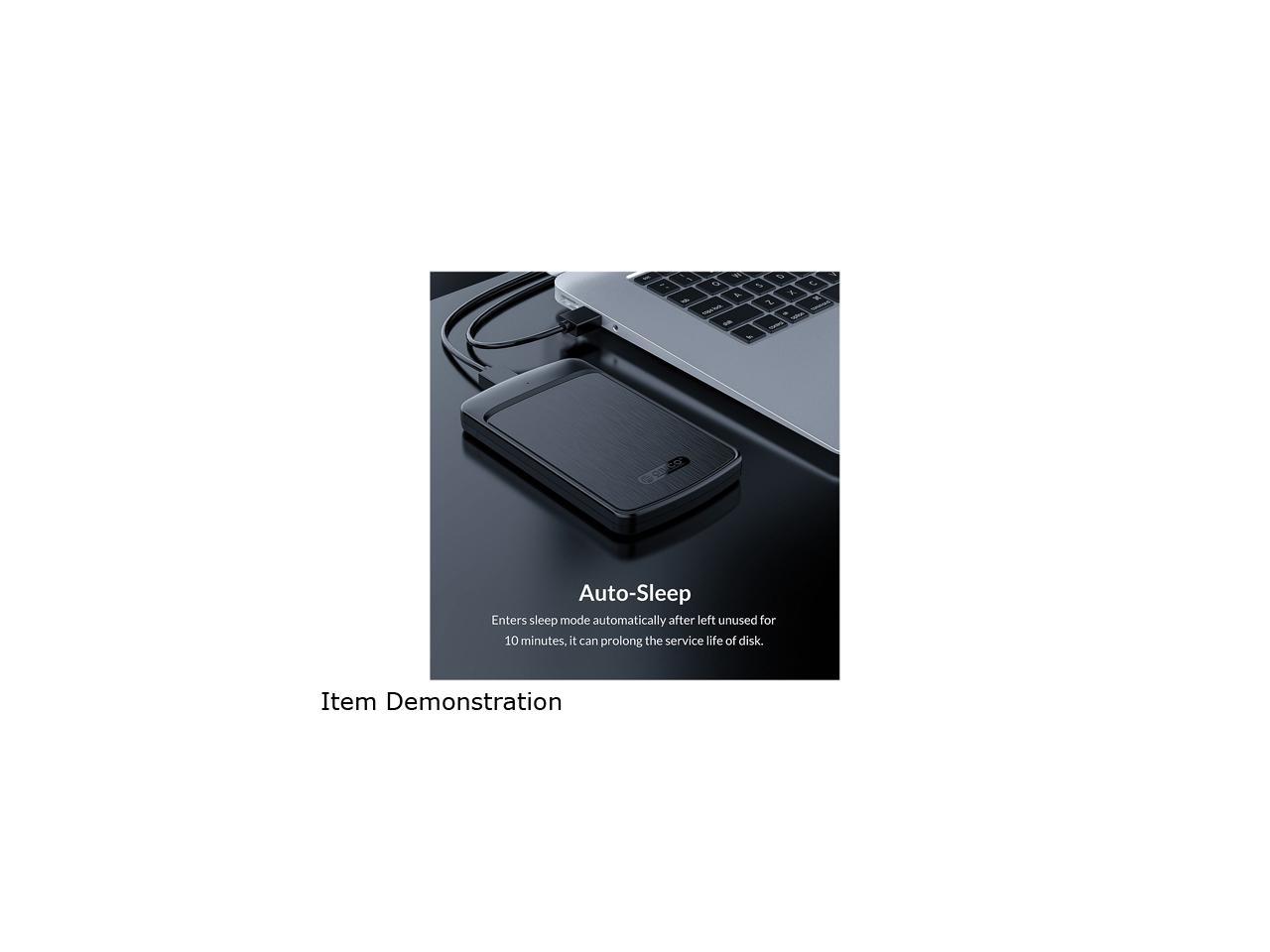 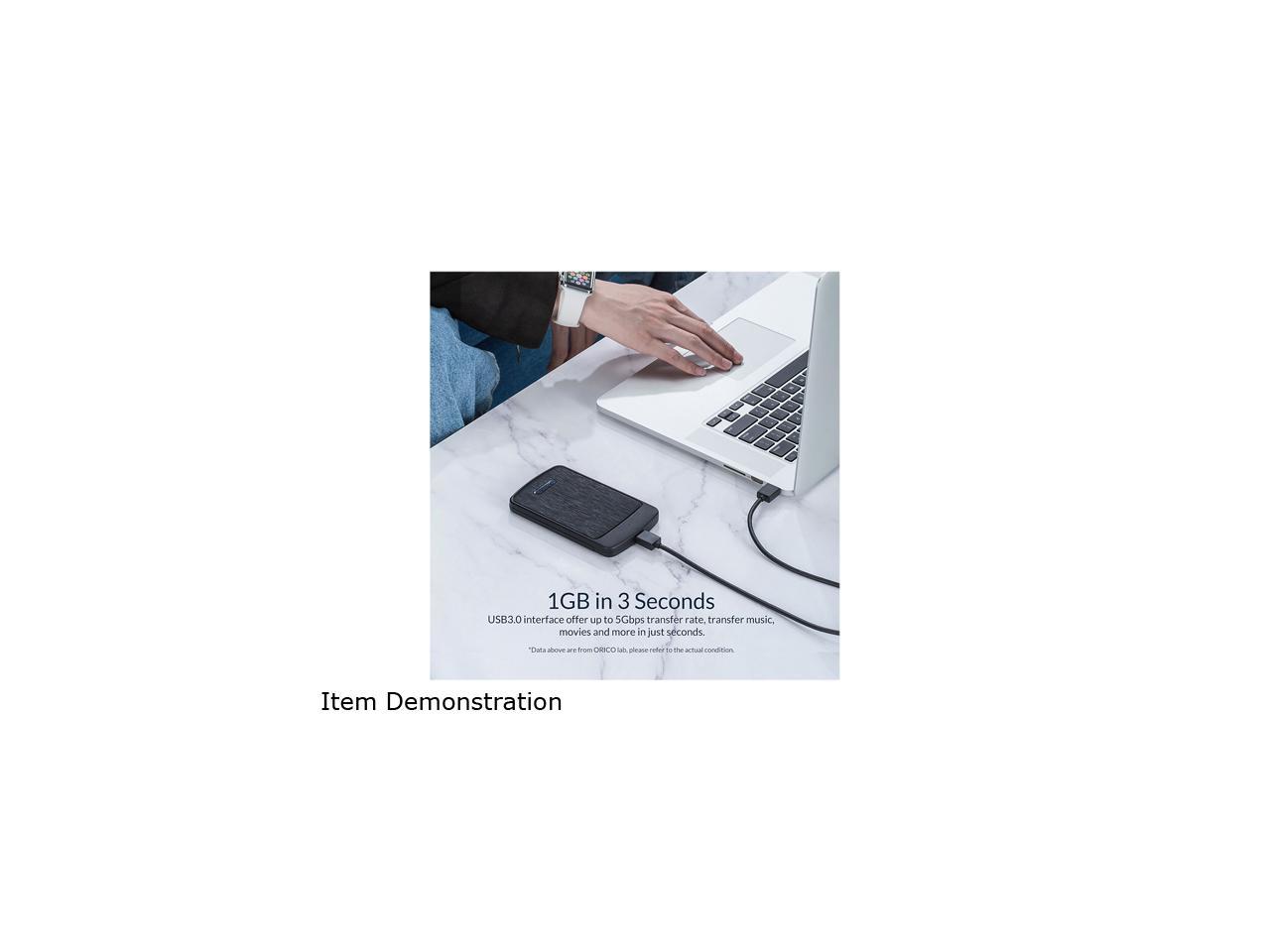 Instantly transform a 2.5" SATA HDD/SSD into an external drive, and enjoy blazing-fast transfer rate of up to 5 Gbps over USB 3.0. The enclosure's tool-free design makes drive installation and removal a breeze. And a sponge cushion in the enclosure helps absorb impact and protect your drive.

What in the box: Learn more about the Orico ORICO 2020U3

Pros: No drivers to install easy install of HD into case. The USB cable got tugged on and this case with the HD inside went flying and slammed onto the wood floor. The HD still works and so does this product.

5 out of 5 people found this review helpful. Did you?
Manufacturer Response:
Dear Devan： Thank you so much for choosing ORICO as your preferred choice, this is Maite from ORICO customer care team. Your kind feedback is the best encourage that keeps us moving forward and constantly improving our goods and services. Our email address is Newegg@orico.com.cn, please feel free to contact me if you have any problem. We looking forward to hear from you and purchase from ORICO again! Best Regards Maite
Chris W.
Ownership: 1 day to 1 week
Verified Owner
Horrible, horrible thermal characteristics8/23/2018 9:04:35 PM

Cons: I had to use foam and rubber bumpers to keep drives from clunking around (though mine did ship with two rather flimsy foam pads, they weren't quite sufficient). But the largest drawback is the lack of any heat dissipation whatsoever. A 5400 RPM drive ran so hot after 3 minutes that I could feel the heat radiating from the drive when I held my hand above it. In fact, I had to drill vent holes into the plastic lid in order to let heat escape. The result? The drive runs about room temperature. It should have shipped with vent holes molded into it, I shouldn't have had to modify it myself.

Overall Review: If you don't plan on applying a little DIY elbow grease, I'm not sure I can recommend this enclosure.

4 out of 4 people found this review helpful. Did you?
Manufacturer Response:
Dear Valuable Customer, Much appreciate for choosing ORICO as your preference, this is Maite from ORICO Customer Care Team. Thanks for your kindly feedback, truly sorry for all the inconvenience to you. To deal with your problem and serve you well, could you please tell me the problems by email? My email is newegg@orico.com.cn, We will try our best to solve this problem Sincerely hope if you can give us a chance to fix the problem. For the defective products within warranty, we can send you a replacement. Hope to hear from you soon, thanks. Best Regards
Cecil S.
Ownership: more than 1 year
Verified Owner
Reliable External Drive Enclosure2/9/2019 7:36:17 AM

Cons: HDDs shift if you don't use the included foam pad

Overall Review: This is my third purchase of this enclosure, I use them with large capacity HDDs for external storage on my Windows and Mac machines. As others have noted the drives can move around if you don't use the foam pad provided, and even then these really aren't the best choice if you're planning on carrying them around as a portable device.

3 out of 3 people found this review helpful. Did you?
Manufacturer Response:
Dear Valuable Customer, Thanks for choosing ORICO as your preferred choice, this is Sherry from ORICO customer care team. We strive to provide the most reliable and highest quality products to our customers. Your kind feedback is the best encourage that keeps us moving forward and constantly improving our goods and services. Should you have any further problem ,please feel free to contact ME. Our E-Mail is newegg@orico.com.cn ,we will try our best to help you. Thanks again for choosing ORICO as your preference. Best Regards Customer Care Team
Michael B.
Ownership: more than 1 year
Verified Owner
Is as advertised9/21/2017 7:21:28 PM

Pros: Fully enclosed Does what it's supposed to do

Cons: Ummm, it doesn't make me a sandwich?

Overall Review: Yes I would recommend this again. I had internal 2TB hard drive that I then wanted to relocate from my desktop to my wifi router. This enclosure made this possible. I now have a 2TB NAS drive on my network.

Overall Review: put hdd's on for my son's xbox one all good no issue

3 out of 3 people found this review helpful. Did you?
Eugene R.
Ownership: 1 week to 1 month
Verified Owner
It's inexpensive and works well, but it's more of a dock with a sliding cover than a portable enclosure.3/8/2016 7:30:53 AM

Cons: It's not a suitable portable enclosure, IMO, because the drives are held in only by friction. It's fine for sitting flat on a desk, table, or shelf though.

Overall Review: I would recommend this to anyone looking for a covered USB 3.0 dock which is easy to swap drives in and out of, and would sit flat on a surface, but I wouldn't trust it to travel with, as the drive is held in only by friction.

2 out of 2 people found this review helpful. Did you?
Manufacturer Response:
Dear Hal： Thank you so much for choosing ORICO as your preferred choice, this is Maite from ORICO customer care team. Your kind feedback is the best encourage that keeps us moving forward and constantly improving our goods and services. Our email address is Newegg@orico.com.cn, please feel free to contact me if you have any problem. We looking forward to hear from you and purchase from ORICO again! Best Regards Maite
Gregg Eshelman
Ownership: 1 week to 1 month
Verified Owner
Poor fitting lid, non-locking power switch. Required a reboot after connecting USB the 1st time.4/22/2021 3:29:05 AM

Pros: It works, even with a Seagate Ironwolf 8TB drive and with such a drive benchmarks to over 230 megabyte per second read and nearly that fast with writes.

Cons: The lid barely latches in place so the slightest nudge will have it falling off. If you want to travel with this enclosure, you'll need a snug fitting bag, put a rubber band around it, or tape the lid on. Unlike most external drives with a power button, this enclosure's button does not latch on so any time it loses power you have to hit the button to turn it back on. Not suitable for systems where drives must be able to turn back on after a power failure. The first time I connected it to my desktop, it would not work at all. I tried four different drives. I had to reboot to get it to function.

Overall Review: I'd recommend it to people who need an inexpensive enclosure for high capacity drives they're just going to park on a shelf, where they can easily access the power button. I'll be doing that with my 8TB Ironwolf drive. I'd like to see Orico either eliminate the power button entirely or change to one that locks on and fix the lid to snap FIRMLY in place, or add a way to hold it securely with a screw or two.

Pros: Works nicely. Compact. Inexpensive. Keeps the drive surprisingly cool for a non-ventilated enclosure, and of course "no fan" means "no fan noise."

Cons: Drive is not securely retained unless you modify the case to fix that. The instructions to use a couple of stick-on foam pads if the drive rattles around when the enclosure is shaken had me thinking, "This thing is going to be returned immediately." All it takes is a slight shake in the right direction and the weight of the drive pops the cover open, allowing the drive to fall out onto the floor. Using the provided foam pads risks having an unaware person placing a pad right over the "Do not press here!" area of the drive cover.

Overall Review: All it takes is a couple of accurately positioned holes allowing the drive to be secured with screws to the aluminum side plate of the case, and heat transfer from the drive to the aluminum plate is improved as well. Suddenly, it becomes a really nice, secure enclosure. In fact, I'm going to buy another. Why the case couldn't have had those holes provided by the manufacturer is beyond my comprehension. Locations for drive mounting holes is pretty well standardized these days, but most people aren't going to have the means to position those holes accurately.