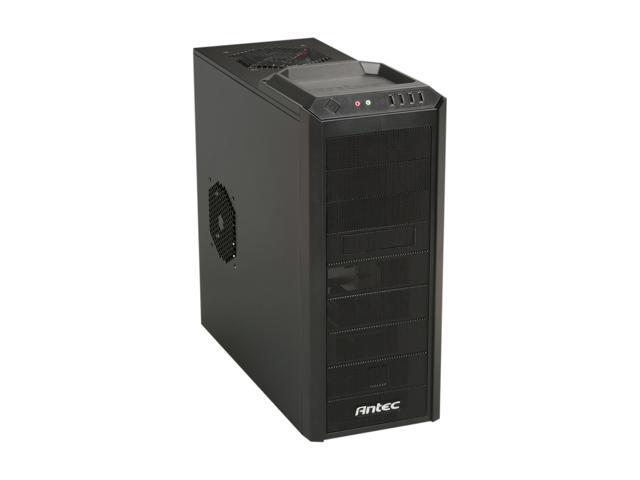 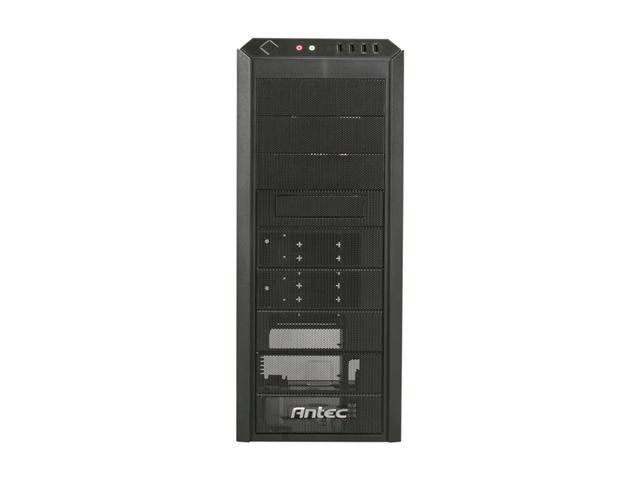 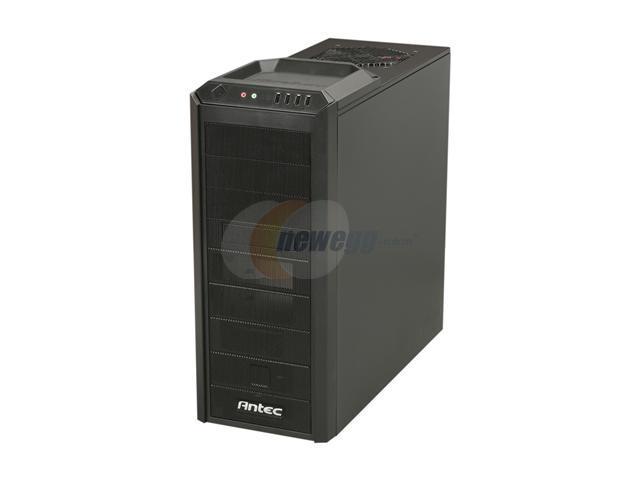 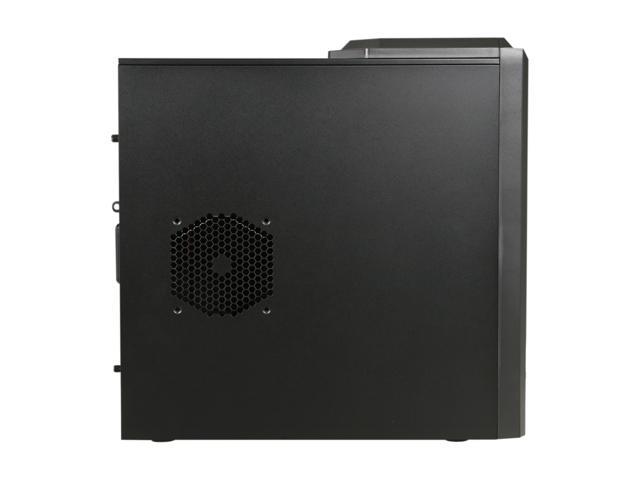 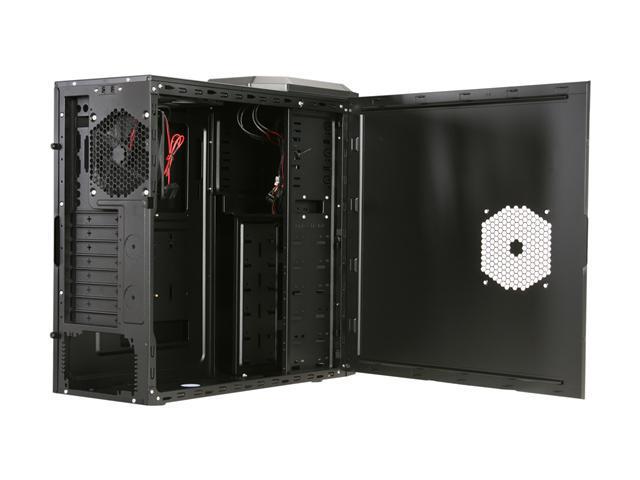 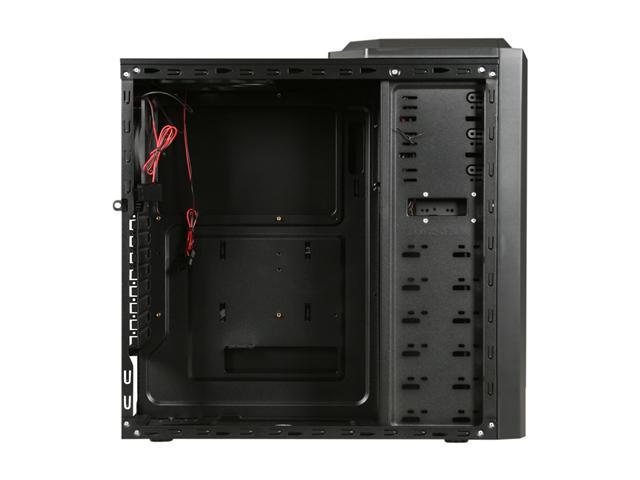 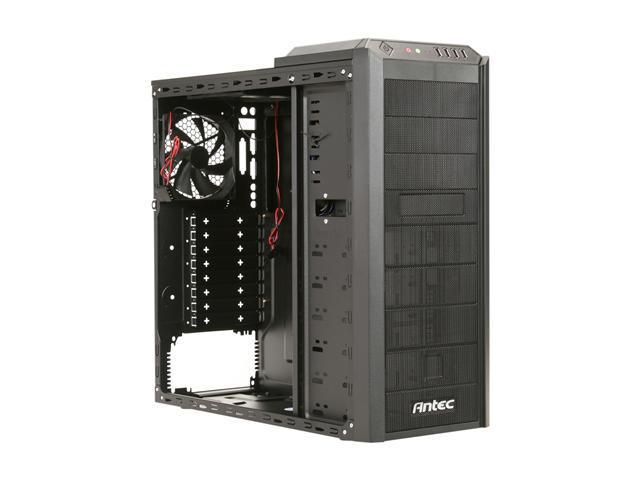 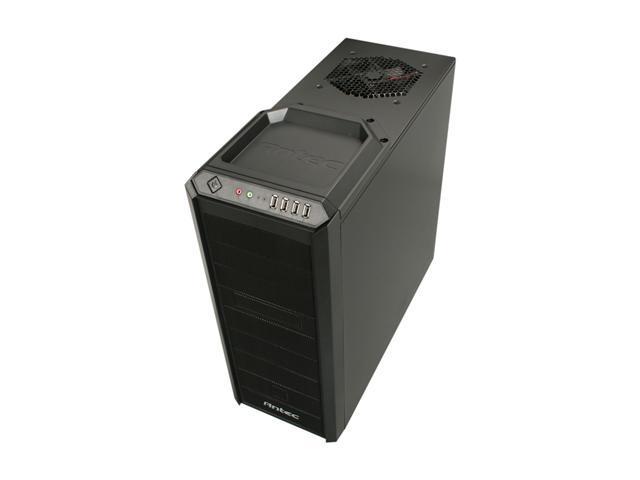 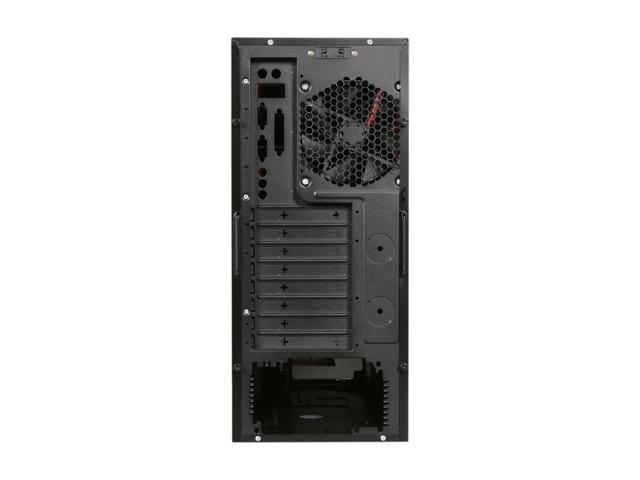 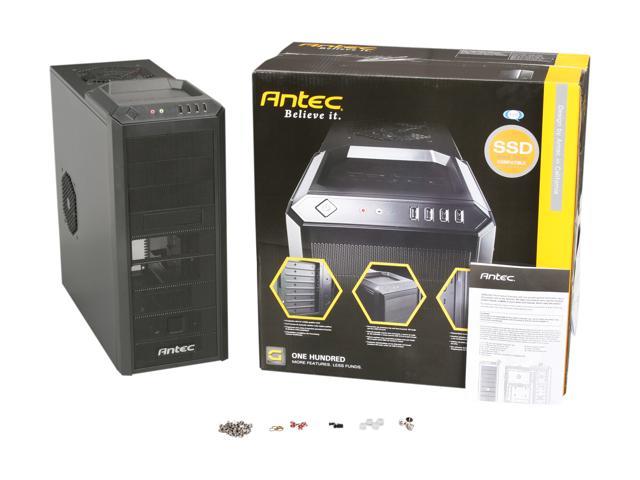 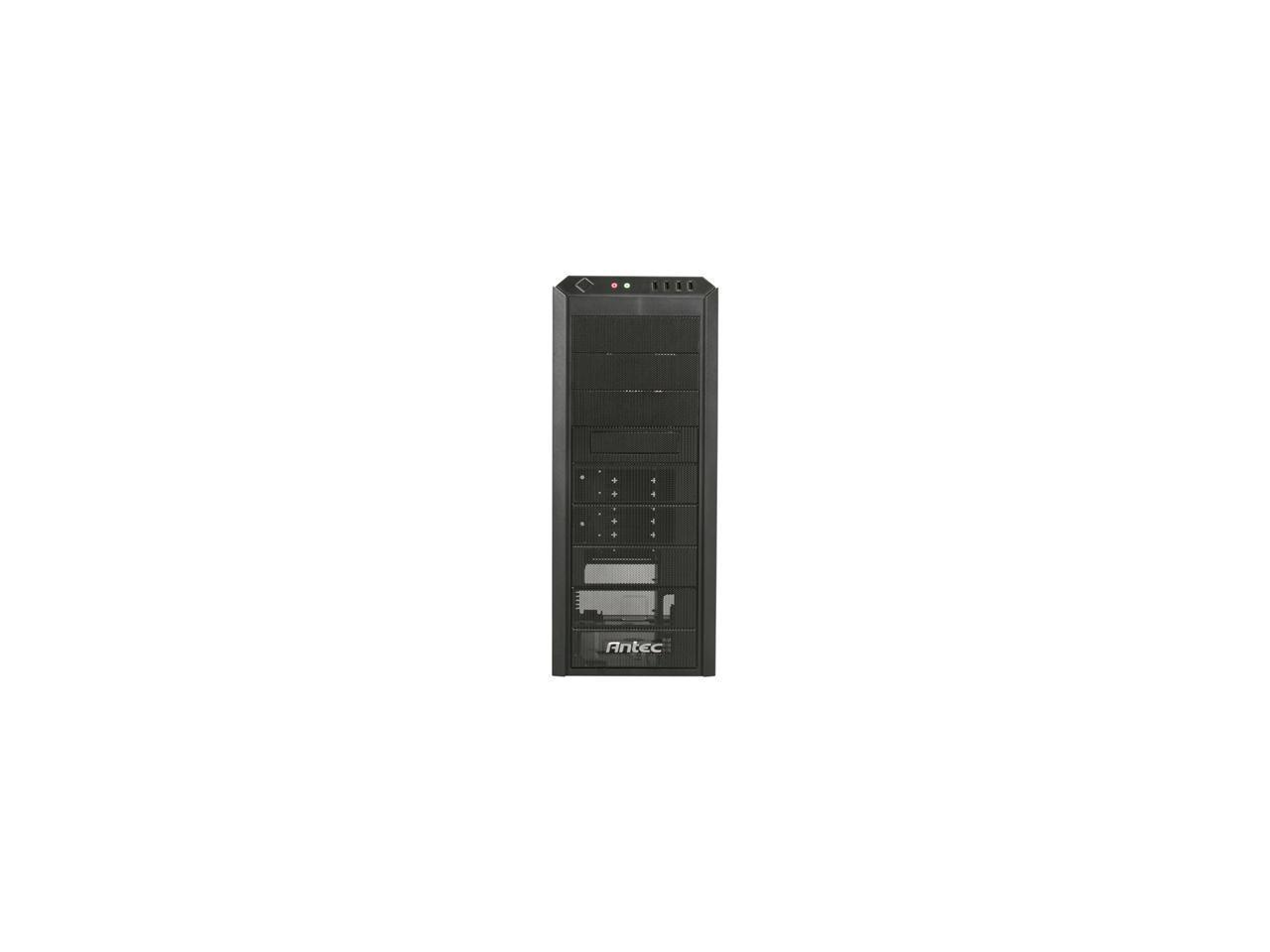 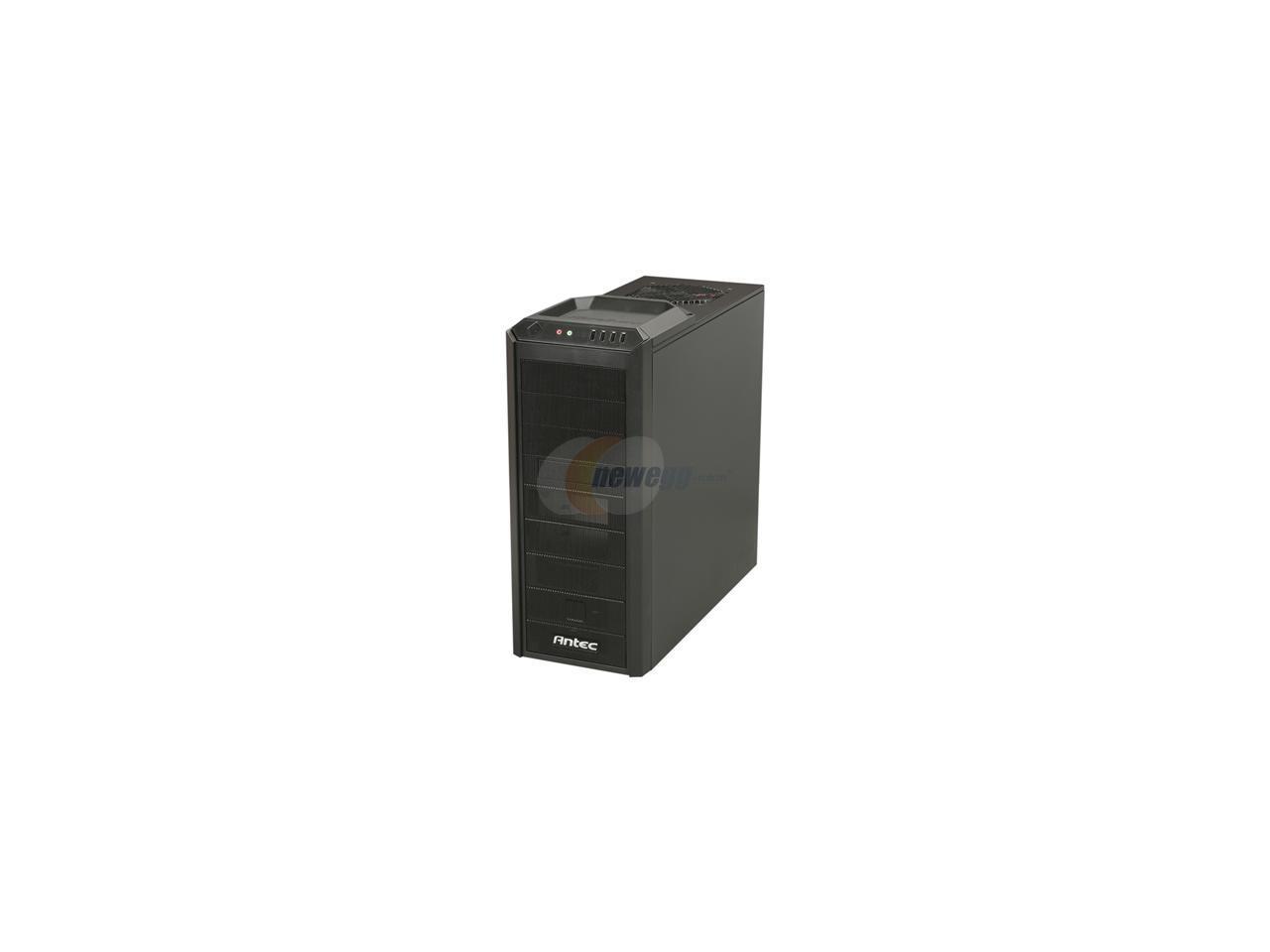 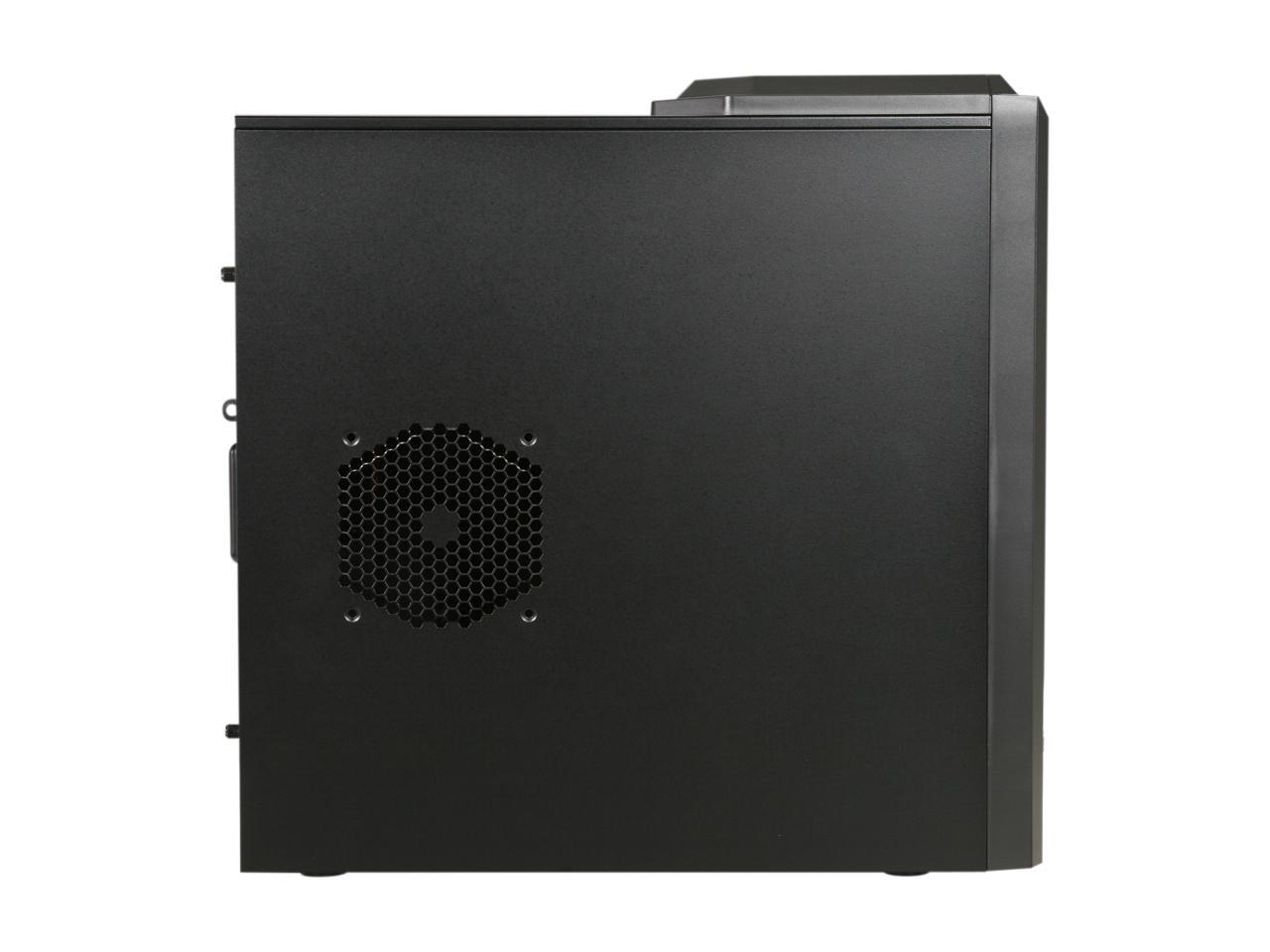 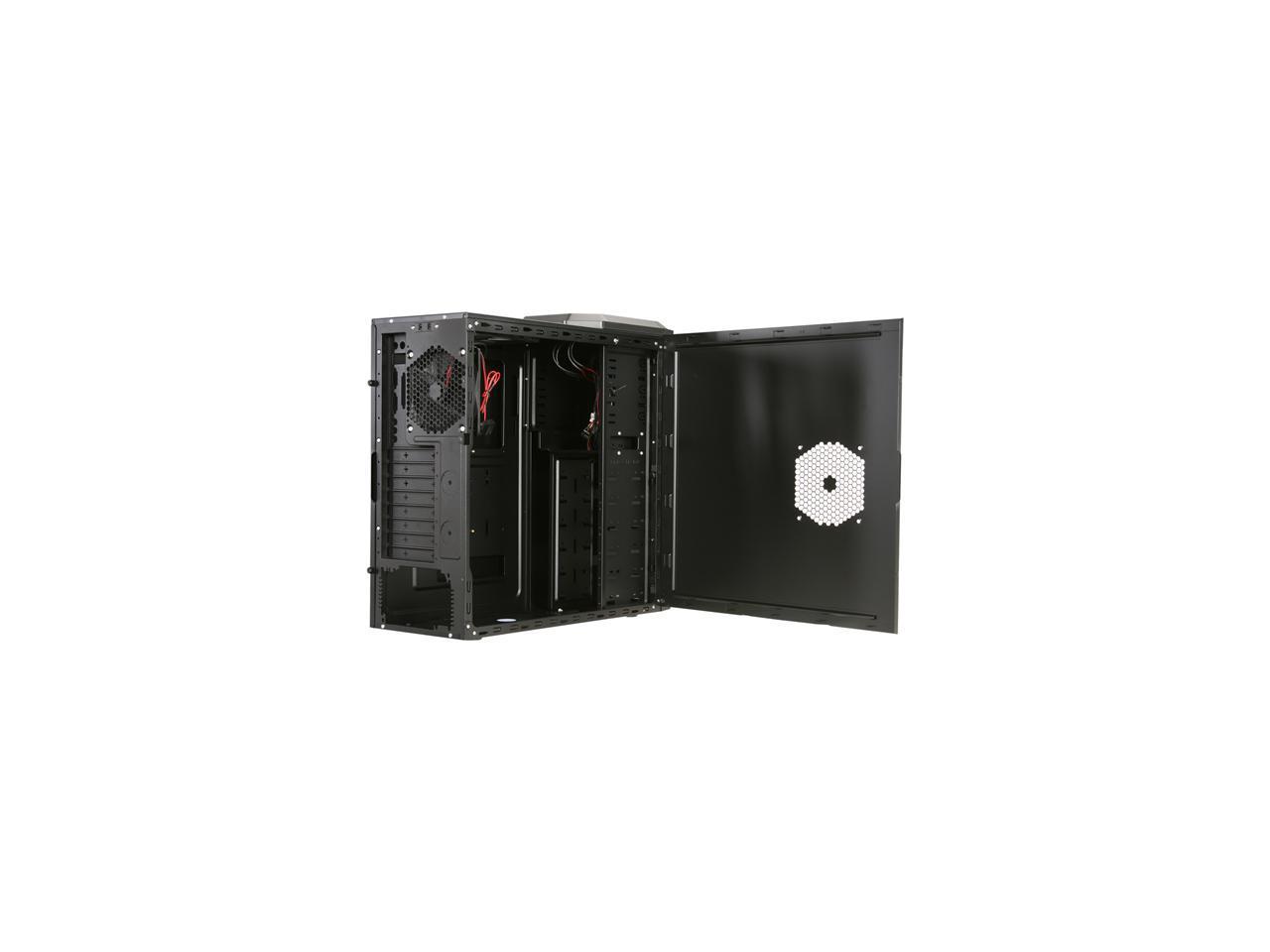 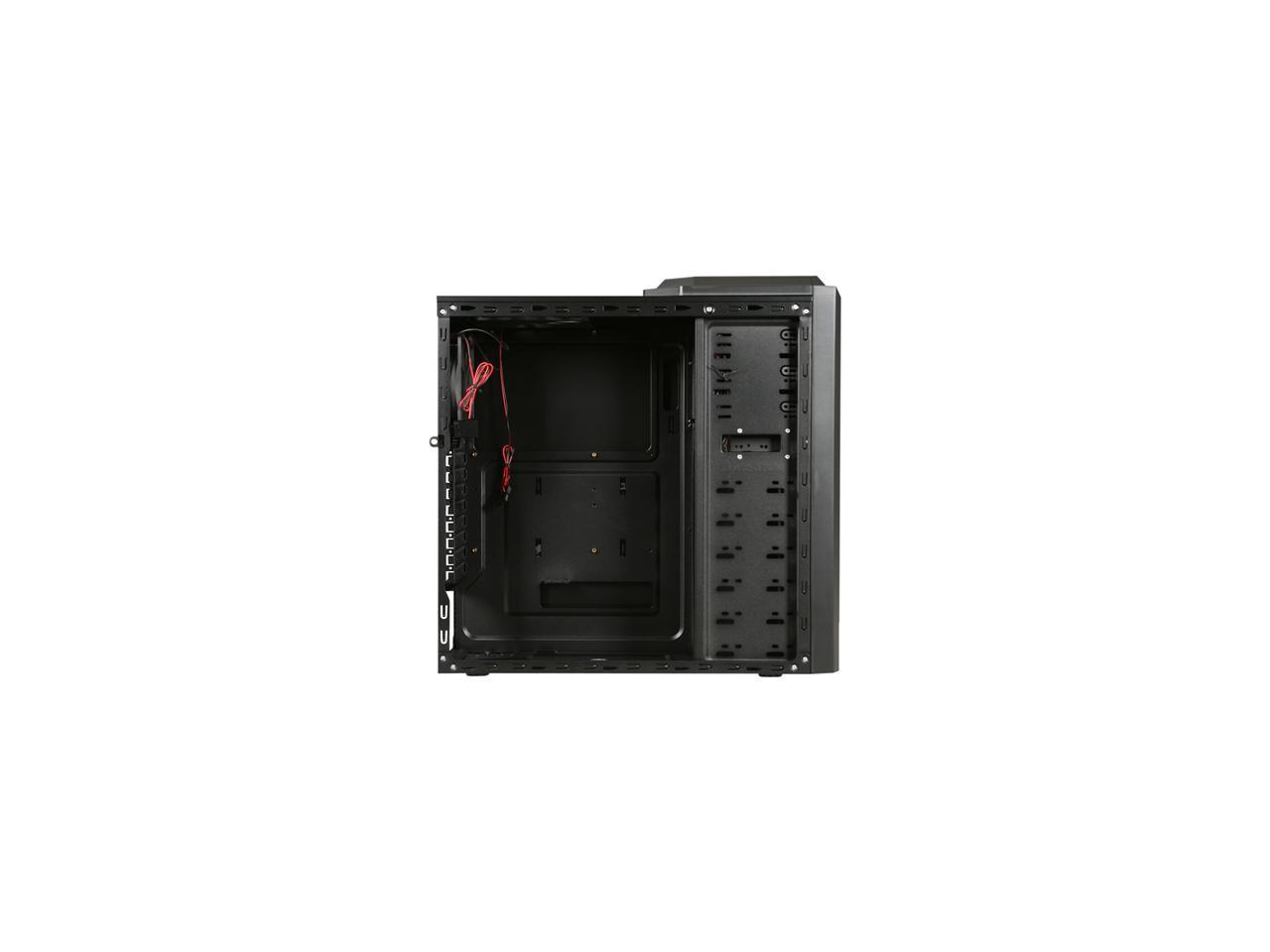 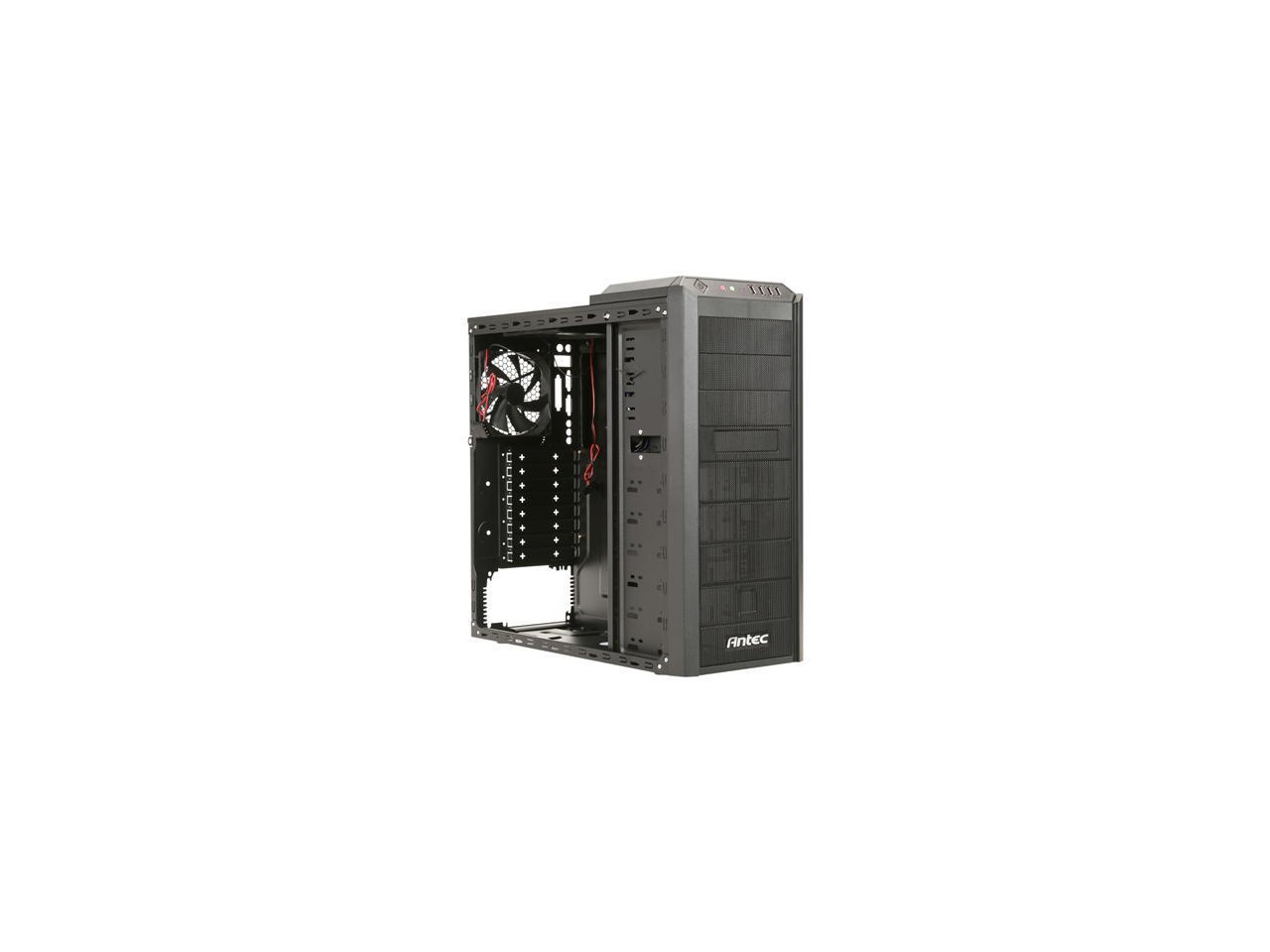 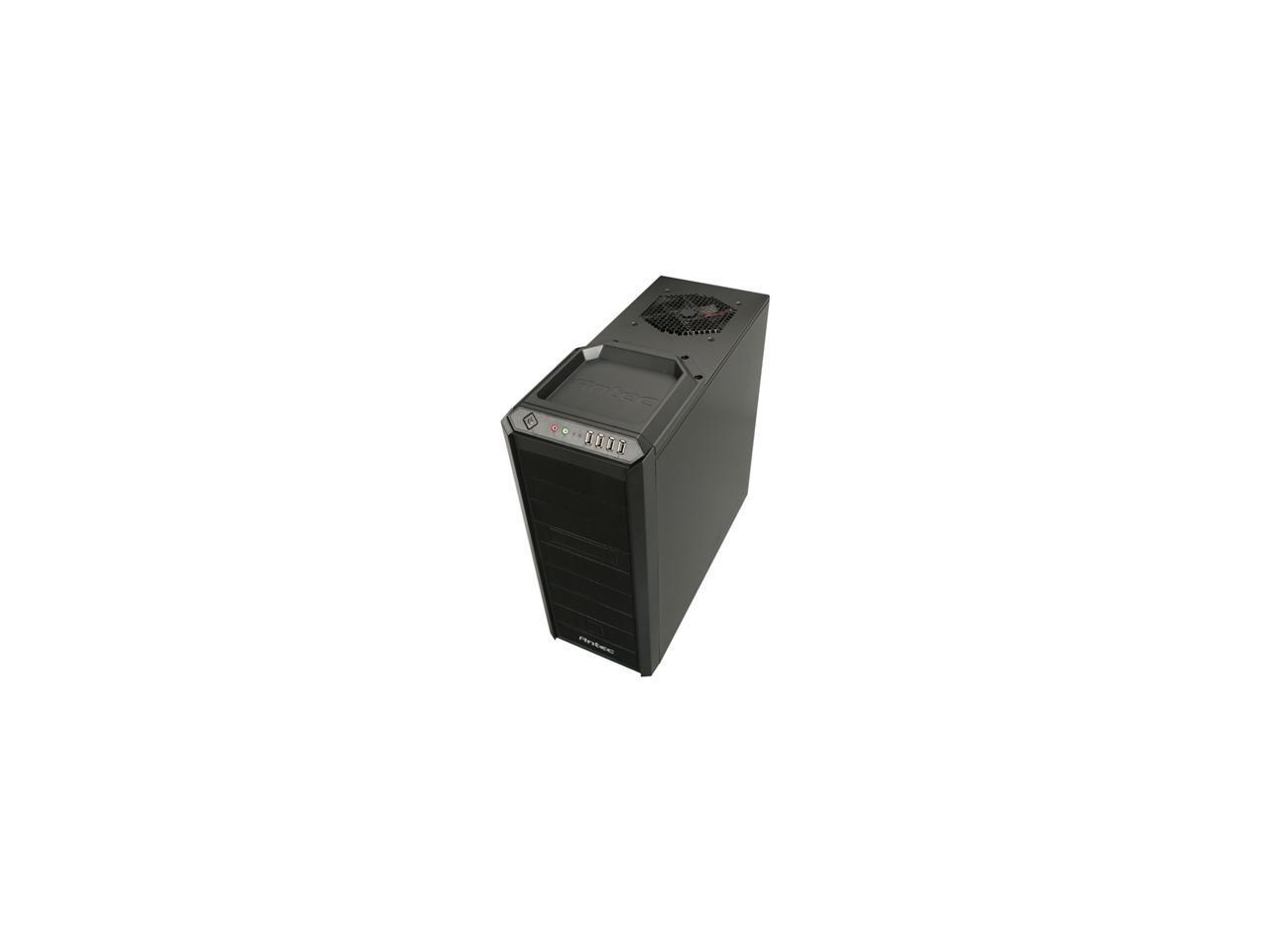 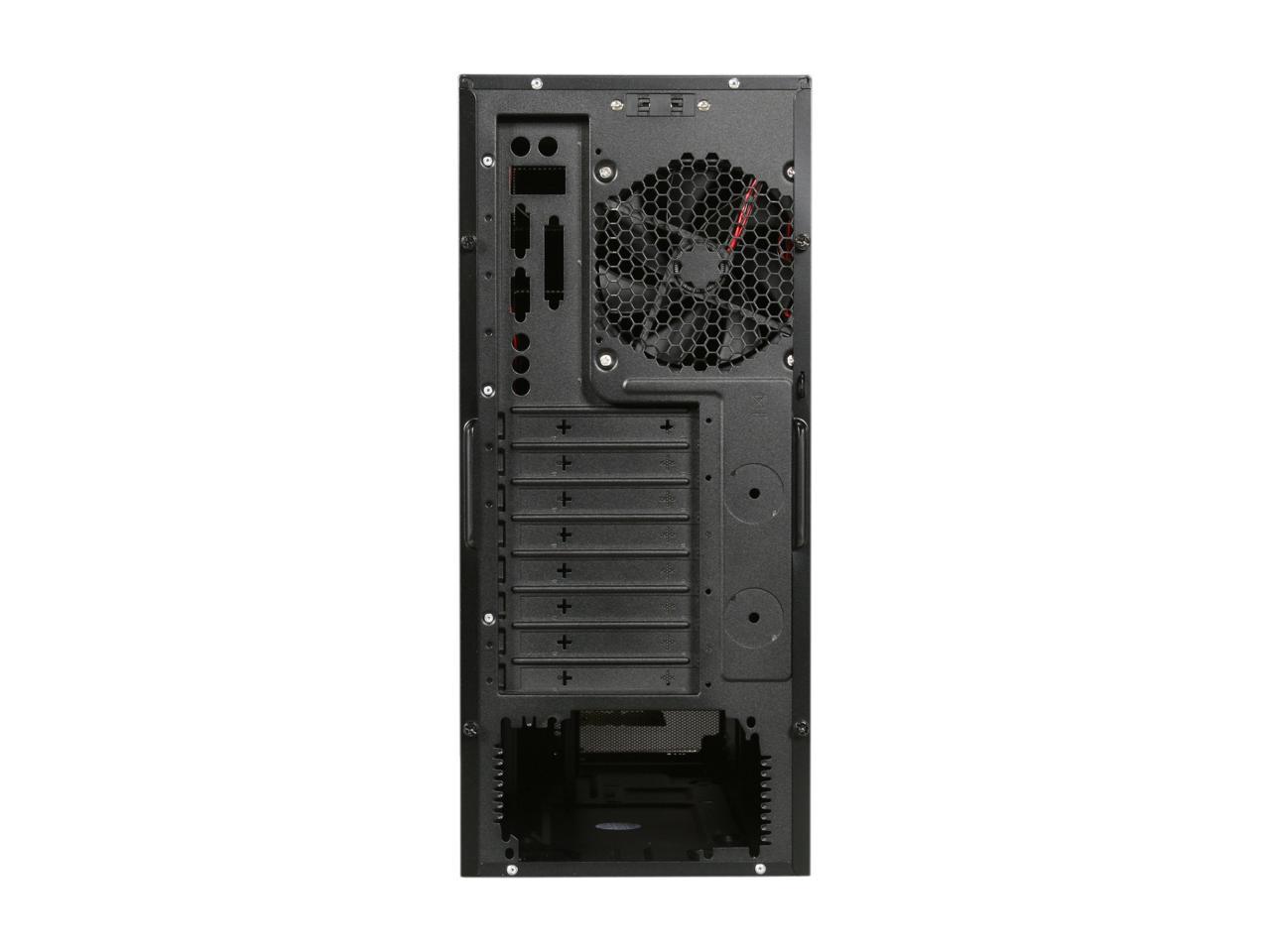 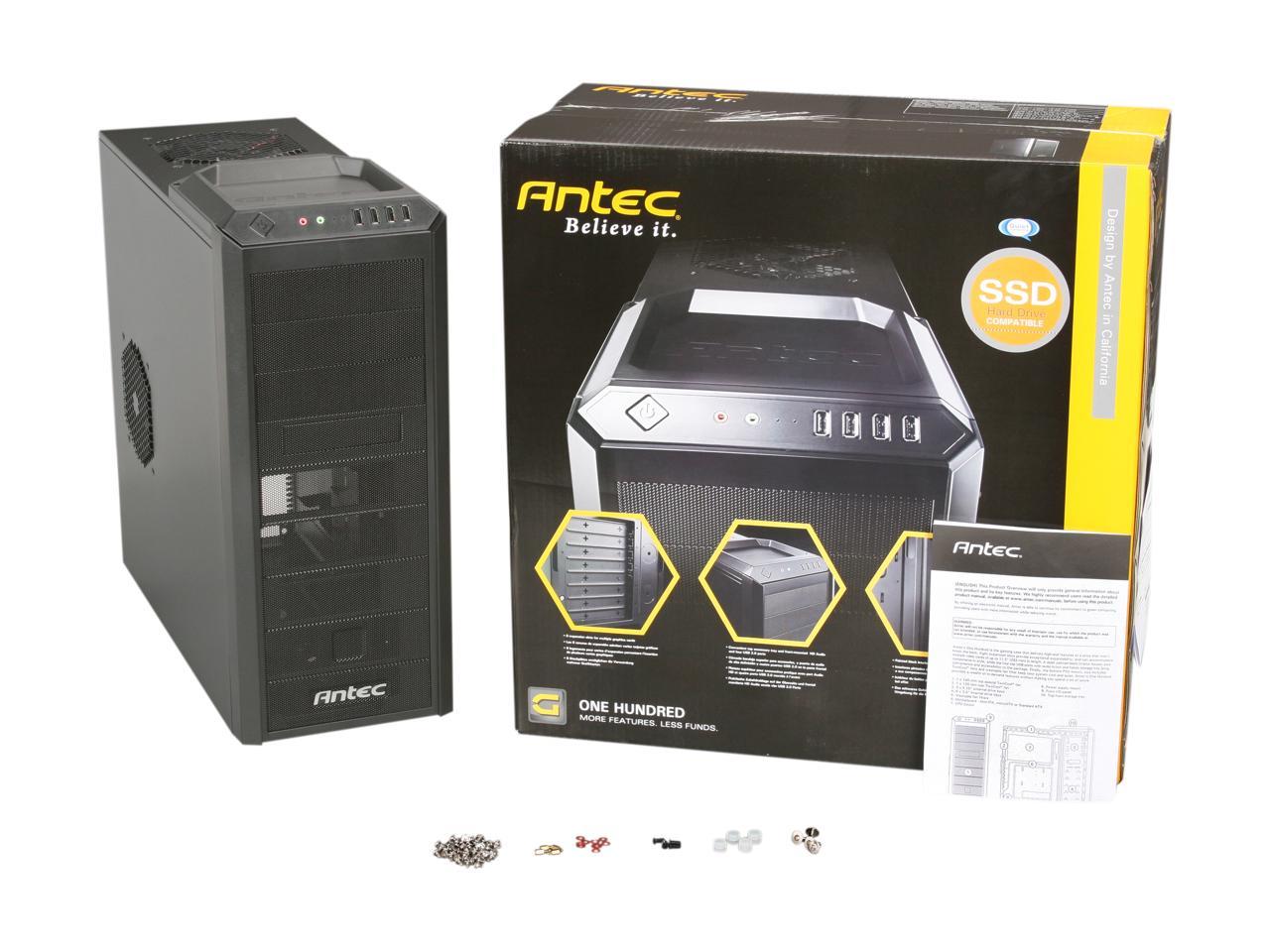 (77) Write a Review
OUT OF STOCK.
Specs
Reviews

Learn more about the Antec One Hundred

Pros: Top mounted tray and usb. Perfect idea for mp3 player charging. Especially when used as under-desk placement. This case is very well designed and manufactured. It's obvious that the design was focused towards air flow and cable management. Stellar job on both. Very nice finish on inside. Very easy to install parts and well built enough to withstand many "ins-and-outs" of your stuff.

Cons: Punch outs instead of slides for expansion cards. If you misjudge or change your mind, then you have to rustle around your used parts bin to find covers. Also, the old 939pin board I put in didn't fit up to the I/O very well and putting in sound card, nic and video card was a little tricky fit. Don't know if it was due to old board or new design.

Overall Review: This case was chosen on the basis of previous success with Antec (three hundred model) and the client requirement of top mounted usb. The tray is the best feature as far as client response. As the builder, I love this case. After using this and the three hundred model, I am now buying Antec's exclusively. Way better than the CM cases I have been using.

Pros: + appearance, esp the painted interior + USB and audio jacks at the top ideal for computers which live on the floor, the angle is an added bonus + catch-all tray for iPod, headset, what ever + fully vented front mesh bezel + nice big CPU backplane cut out in mobo tray + speed control on included fans with externally accessible switches

Cons: - no USB 3.0 front panel jacks - the blow hole fan is wicked close to the motherboard to nearly touch. Wouldn't be a problem but for the EPS12V/P4 aux power jack on most mobos is right up there too. The lock tab on the power plug is like a mm from the fan blades! - no vent holes on the bottom of the case for power supply to draw in air. Had to mount P/S with fan facing up. :( - expansion slot covers are pry-and-pop type so are not replaceable - included fans are molex only, wish they were 3-pin so mobo could monitor them

Overall Review: For the money this is an excellent case! I used an Antec Kuhler H2O 620 which fit in the rear fan location very nicely. I moved the 120 fan from the rear to the side panel and it works great. Some people have mentioned the lack of filters on the bezel. I'd rather not have filters, IMHO they aren't cleaned often enough by "average" users anyway. ** This case arrived with shipping damage.** I've ordered 3 cases from newegg in the last month and all 3 have arrived damaged to one degree or another. In this case the blow hole fan had it's guts dangling down into the case and the top thumb screw had been sheared off. I was able to remove the screw and replace with new. Antec shipped me a replacement fan at no charge. Kudos to Antec. Boo to Fed Ex.

Cons: 2 Front fans not included. No big deal. No reset button. I personally don't care as I haven't pressed a computer reset button since 1998, but may be bad to some.

Overall Review: This is the chosen case for my first build. I did ALOT of research on budget-priced cases and components before I decided to go with this case. I would seriously recommend this case to anyone. ;)

Pros: Very sleek looking case with a lot of cooling options. The front top USB ports and audio jacks are very handy and in a perfect position (better than my old p180: front right lower half). It is well built, seems durable, and not too heavy. Good price.

Cons: Despite being a mid-tower ATX case, it is a little cramped inside. There is about 1mm of clearance between the top of the motherboard and the case fan installed in the blow hole slot. There is still plenty of room for the big PCIE video cards though. Minor gripe: It has hard plastic instead of silicon or rubber feet on the bottom. As a result, it can slide a bit on my hardwood floor.

Overall Review: FYI: It does not have a reset switch. This is not a deal breaker or a big problem, just odd.

Pros: Nice exterior design - Not too flashy. The ports / buttons are laid out smartly. SSD "Bay" at the bottom. 140mm and 120mm fans included. Plenty of drive bays, including a 3.5" that is not found on some of the higher end Antec "Hundred Series" cases. System runs about 5 degrees above ambient temp according to motherboard, so it keeps things cool enough for me.

Cons: Construction quality isn't the strongest, but probably above par for its price point (at least it's commonly available sale price point) FP audio header cable could stand to be about 6 inches longer. Had to run through the front of case instead of via cable management path. Fans have 4 pin Molex connectors insteda of motherboard connectors. Would it really cost that much more to include a fan with a speed sensor / motherboard connector? 140MM top fan can interfere with Motherboard installation, but it's not a show stopper - just be patient and don't manhandle. Works great for my Gigabyte GA-Z68Z-UD3H.

Overall Review: Overall this is a great case if you are building a system for everyday use. If you swap motherboards all the time, or travel to LAN parties, I'd go with a case with sturdier construction. For someone like me who builds a system and will mostly sit in place for the next 3-4 years, it's prefect. I've built plenty of systems for others, including about 300-400 whiteboxes for corporate deployment, but this is the first build for myself in a LONG time (10 years maybe?) and I wanted a decent, conservative looking, quality case and I found what I was looking for in the One Hundred. The 4 angled USB ports are great - my system sits on the floor and I can just glance down and plug in vs. if the ports were flush on the front. Almost went with a Nine Hundred because it was on great sales here at Newegg, then decided on a Three Hundred until I saw the One Hundred. Don't let the Cons above get you down. I'd buy this case again in a heartbeet.

Pros: everything fits nicely, no sharp edges, looks good, love the tray at the top. the fans are really quiet and give good airflow. nice balance between weight and sturdiness.

Cons: side panel is not perfectly flush after a couple of times removing and replacing it. wish the pci slot covers were replaceable.

Overall Review: very good value for the price, I've had 4 antec cases through the years and haven't been dissapointed.

Pros: Has plenty of room and cable management options what more can one ask for.

Cons: This was a part of the Gigabyte 870A-UD3 combo, the motherboard required 3 more holes to be drilled into the metal to install additional stand-offs, proceed to do so at your own risk.

Overall Review: When you do the drilling, place the motherboard to mark the holes that are required for the drilling.