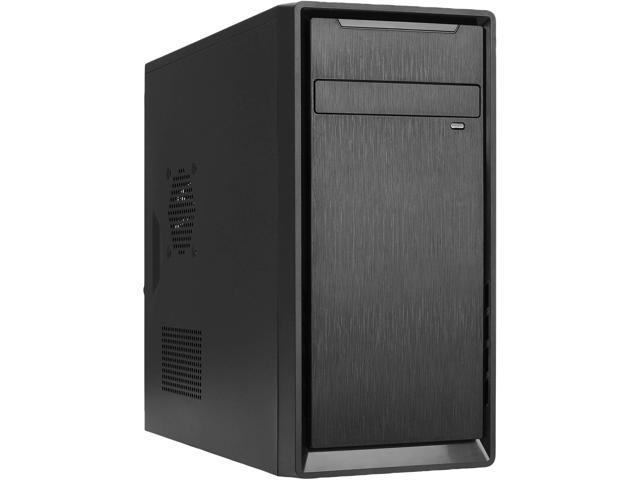 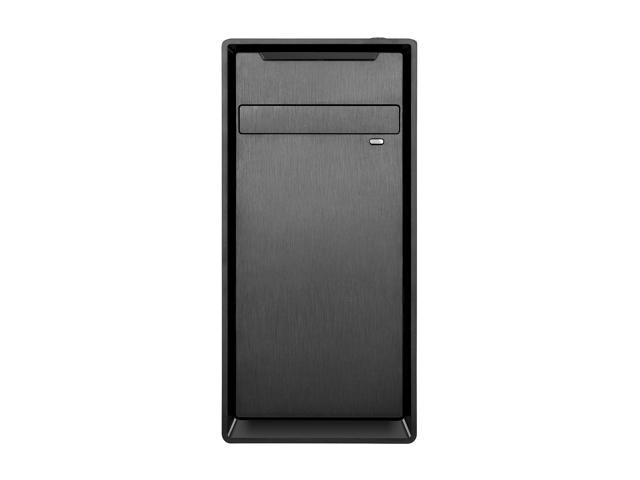 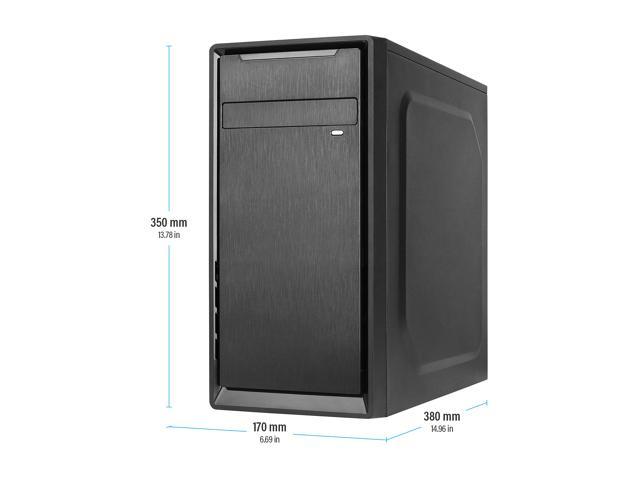 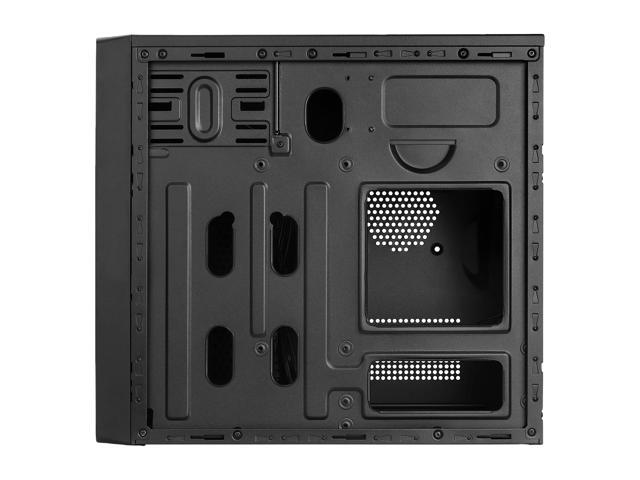 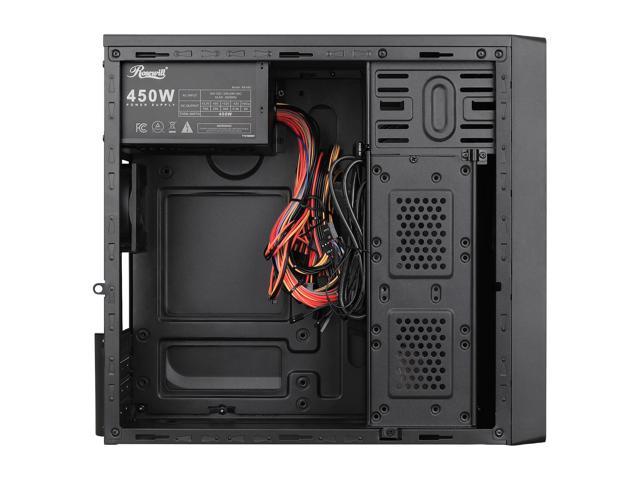 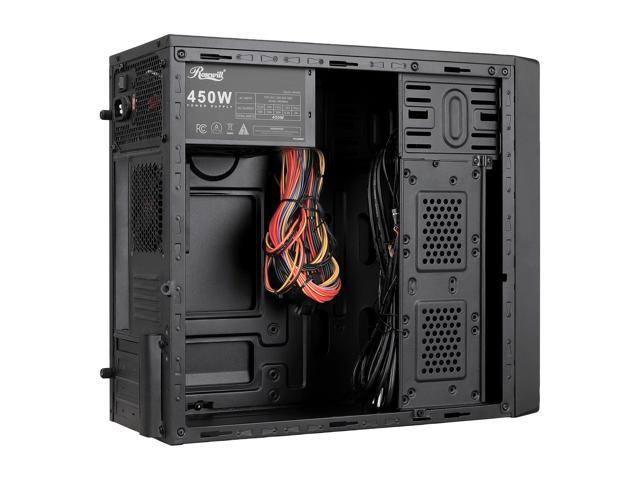 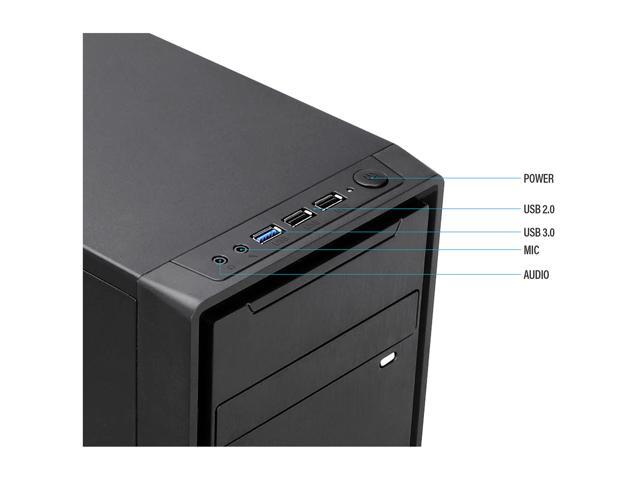 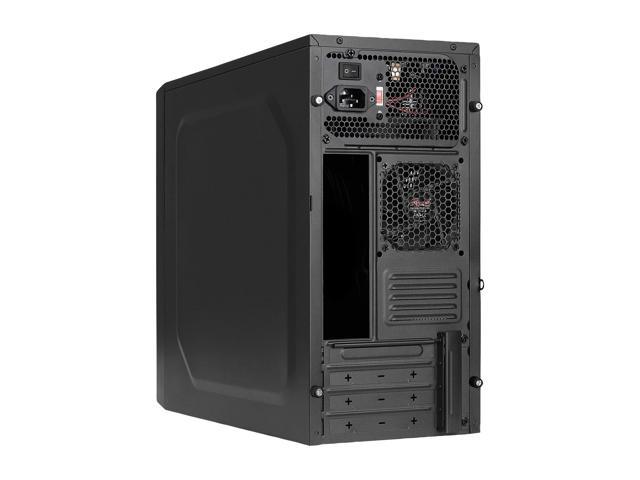 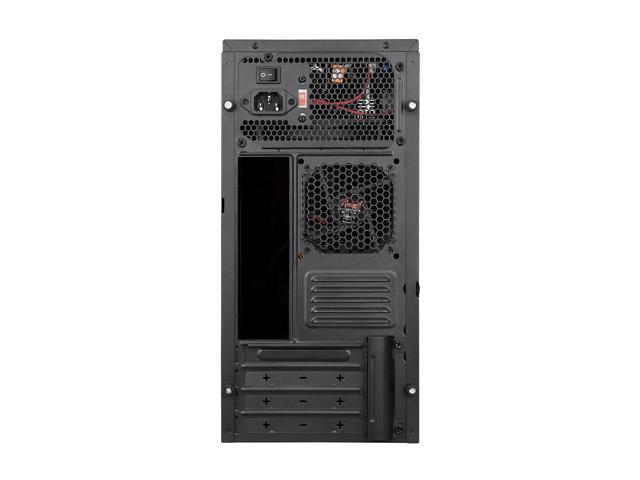 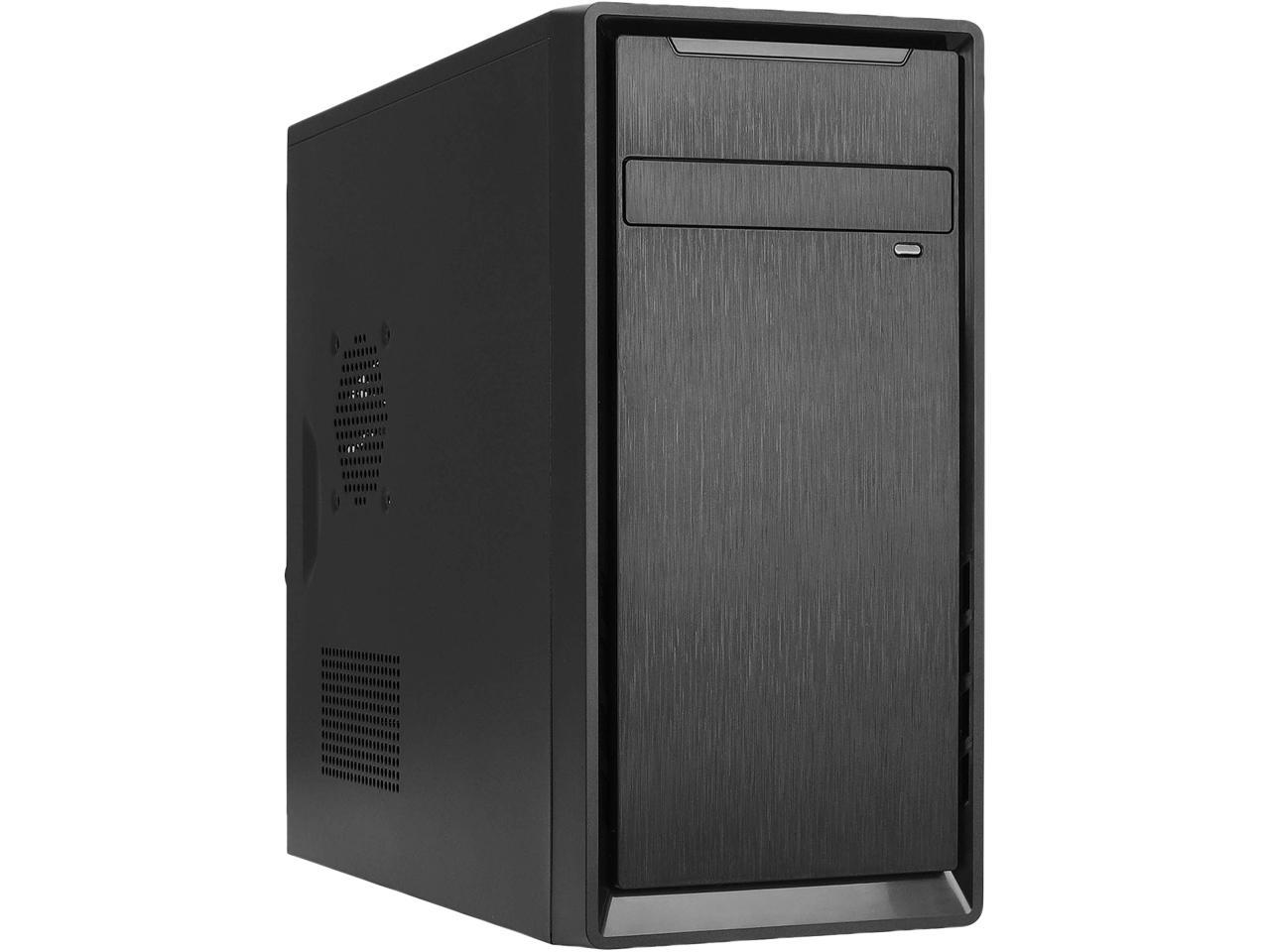 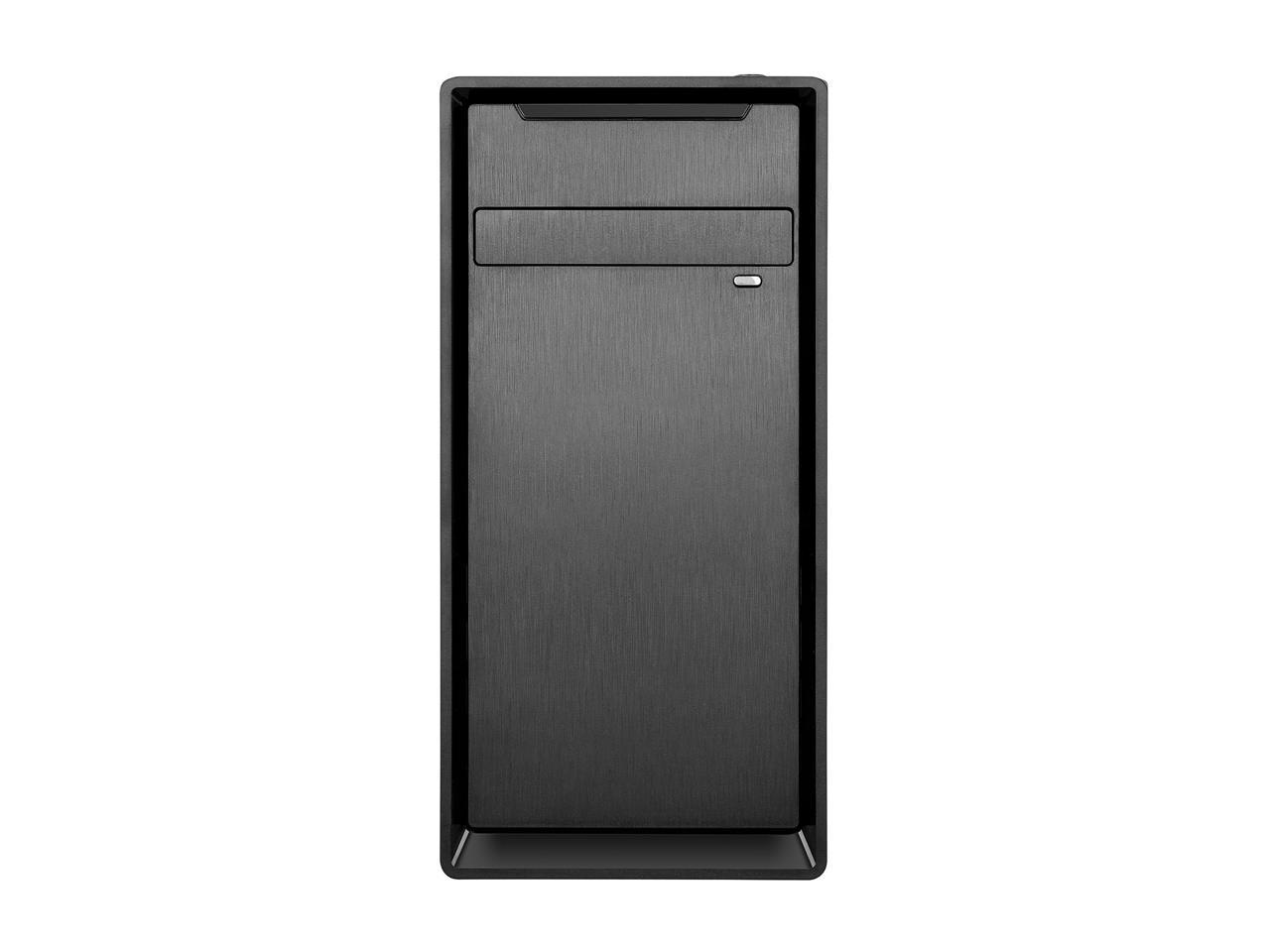 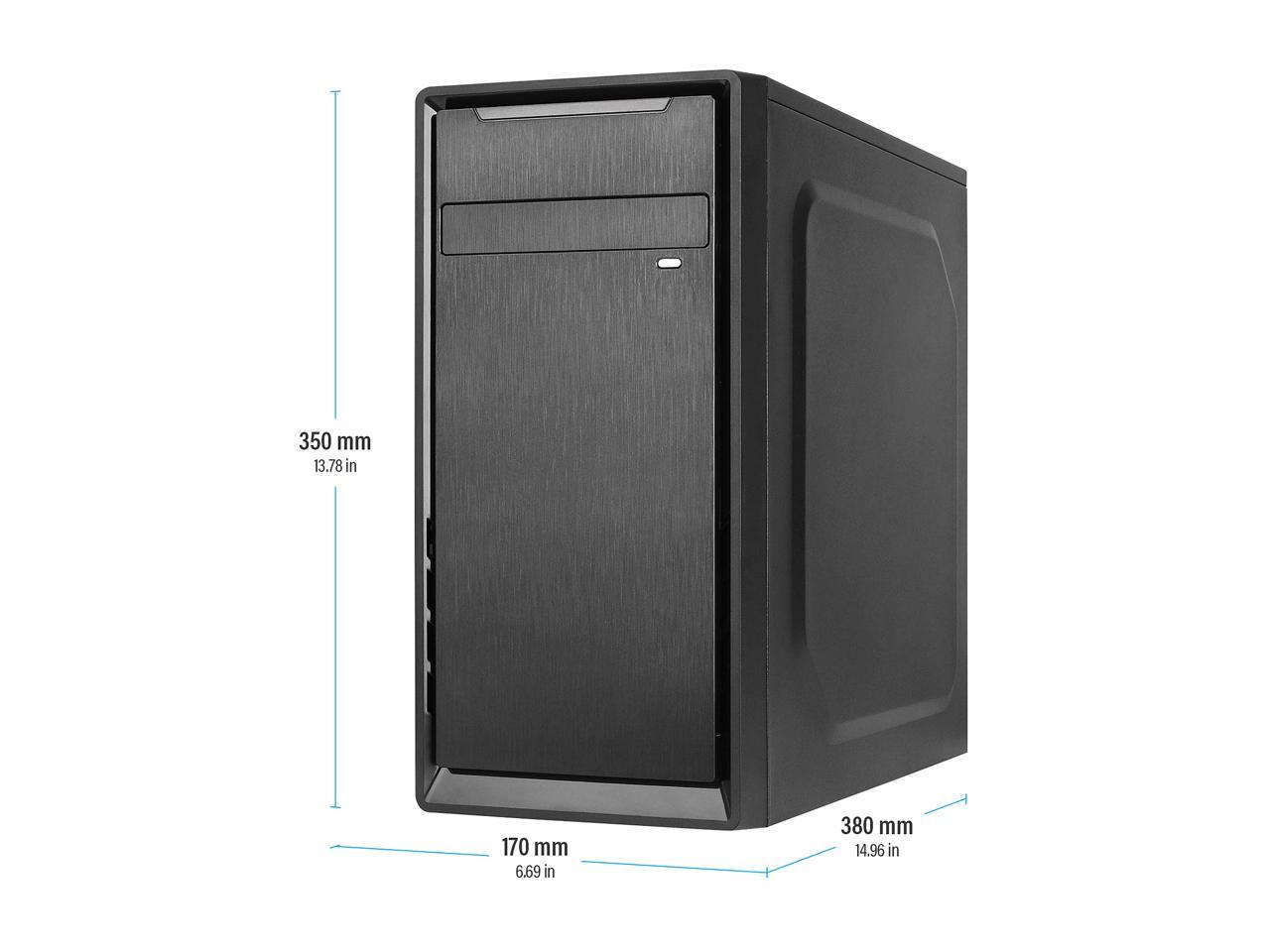 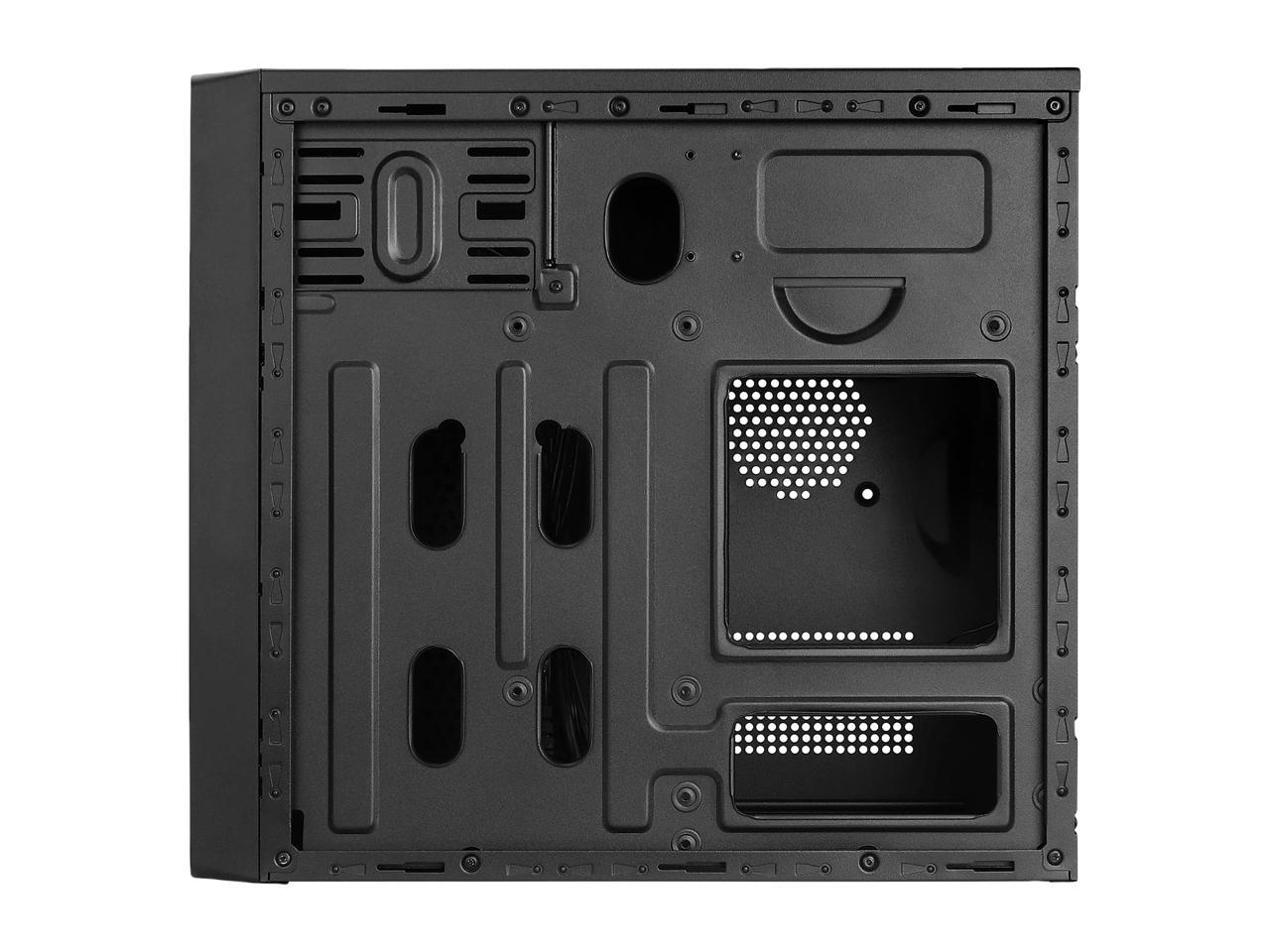 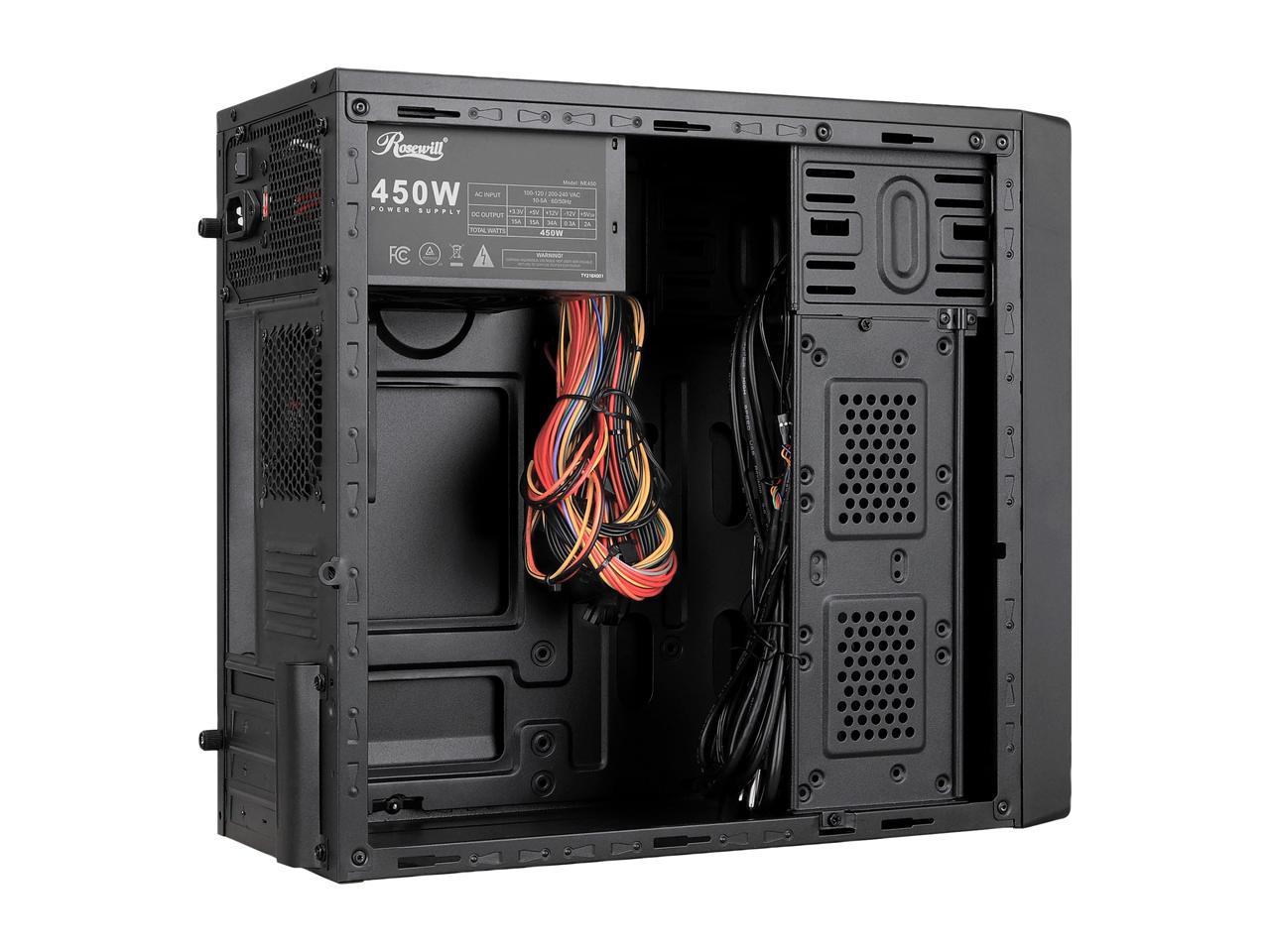 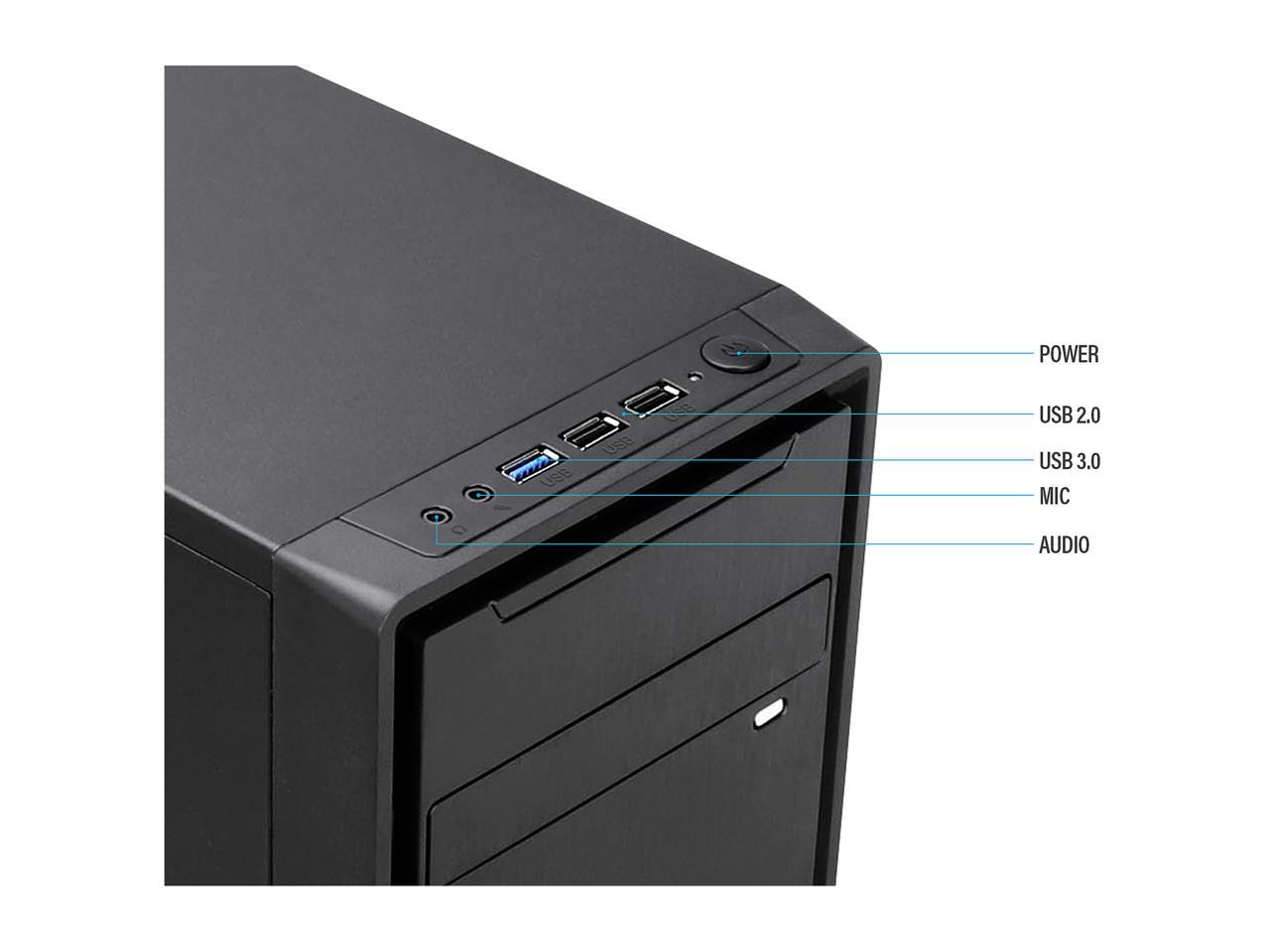 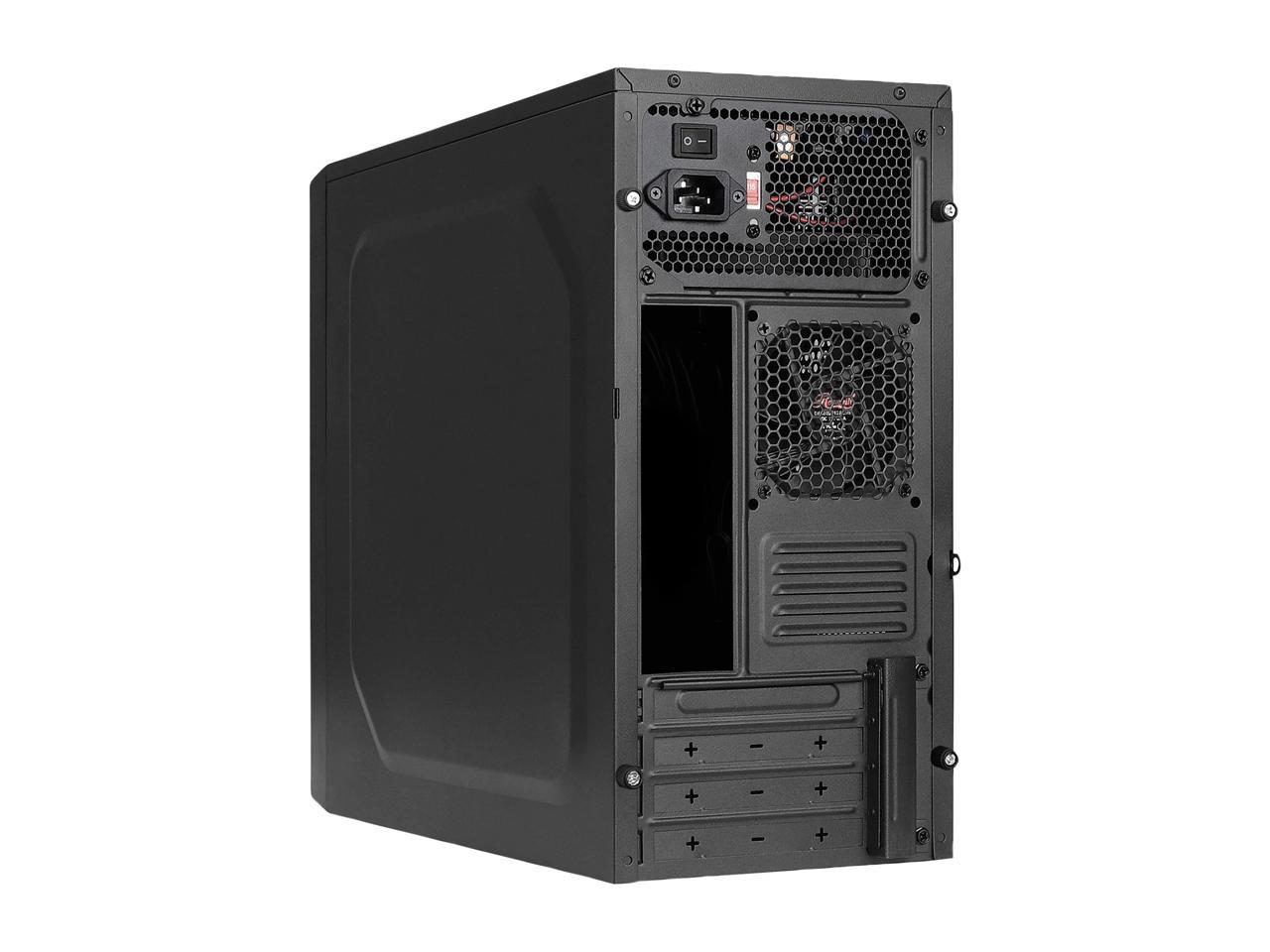 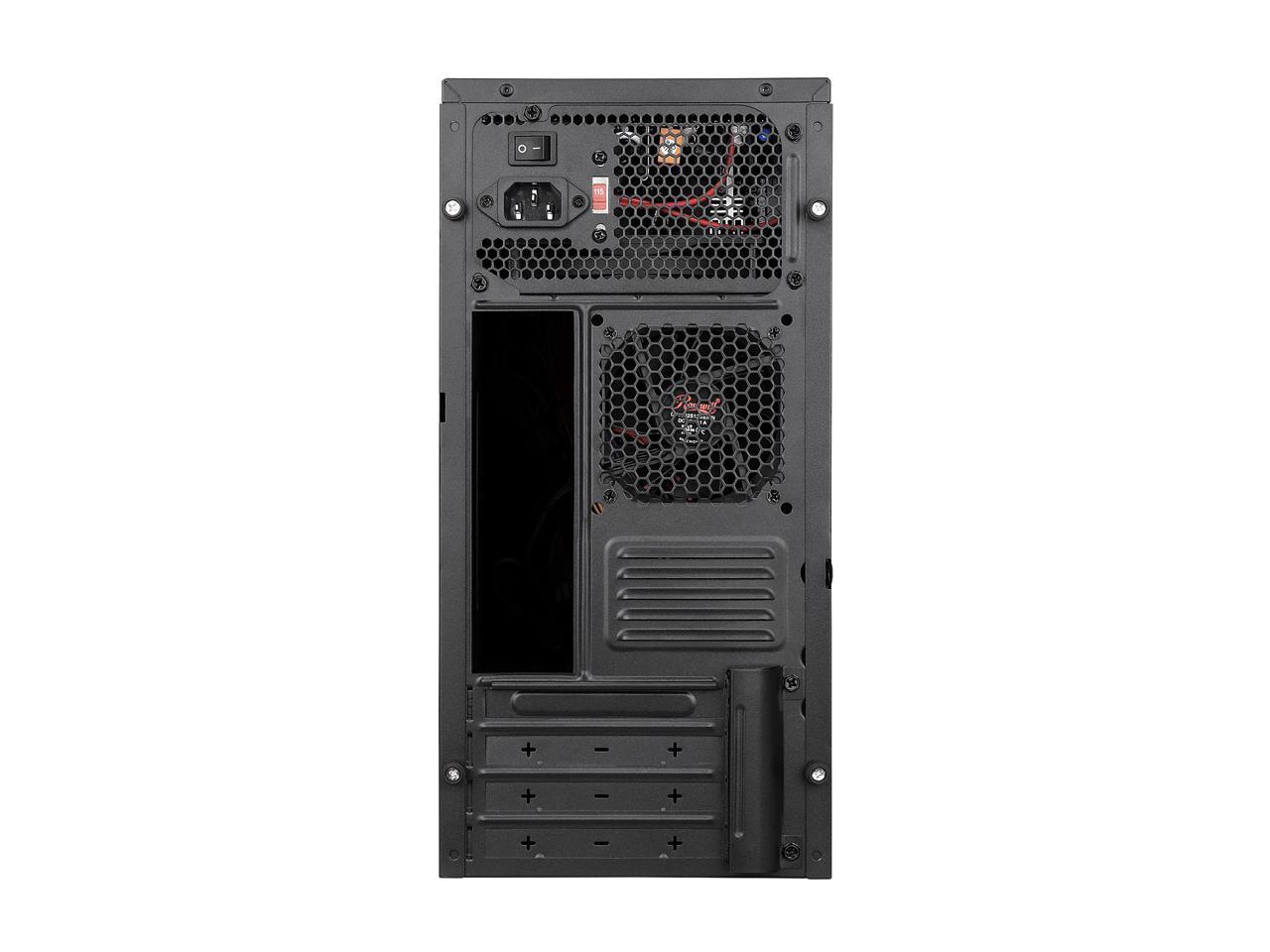 Build an office PC within the compact and sturdy steel mini tower computer case. Enjoy lasting performance, a spacious interior and versatility for all your current hardware and future upgrades.

Learn more about the Rosewill SRM-01B-450

Pros: Small, Compact, Some cable management opportunity. Overall was a nice case sure it was a little flimsy but for the price it was worth it it doesn't have to survive a bomb.

Cons: They only give 6 standoffs and the motherboard took 8, Would have liked to see more standoffs so it wouldn't be bending so much trying to push on the power switches, usb 3.0 and some other odds and ends. Also possibly a little more room or bring the bump for the cable management up higher because I had to really push the wires down to near the top where i took the ps wires through.

Pros: - Surprised at the material finish. Is it as good as a $100 case, no. Is it sharp and will cut you to all heck while working in it? No. This build quality, not material quality, see con below. - Enough room under MOBO/side panel for some efficient cable routing. - Nice ventilation options - Included 90mm rear, will fit 120mm up front and 140mm on the side.

Cons: - Power and reset cables. As soon as you put an optical drive in it gets VERY interesting routing them and no options to tuck them behind the side panel. Wish they would have added another 6-8" to their length. - Material quality. It's flimsy and the plastic used for the front panel tabs is brittle. It's a $20 case so not too surprised. - Optical drive door/flap. It's a knockout with a button. Either they should have just ditched the button so the drive could come flush to the front OR actually have a hinged flap for the drive to come out through.

Overall Review: IT WILL FIT A PSU AND OPTICAL DRIVE. For those that keep claiming it will not fit an optical drive and PSU. It does. Is it easy to get done? No, but it is possible. I have a full size DVDRW and 400w Corsair PSU in there. You just have to get the PSU in first (before the board), then cable up your 5.25 drive BEFORE sliding it in the case. Otherwise you'd need tiny little fairy hands to be able to hook up the drive. It's less than 1.5" gap between the two in my case.

Overall Review: I put an MSI 760GMA-P34(FX) with an FX-8350 in here with a Zalman CNP8000B CPU cooler and couldn't be happier. I added a Cooler Master Silent Fan 120 S12 in front, exhausting I think, and left the 80mm fan it comes with in the rear. I put a regular size (big) Lepa 500W power supply with a fan on the bottom facing the cpu cooler and I imagine that helps keep the temperature down. It's got a passively cooled PowerColor HD 5450 in it, and an intel Lan card, along with a single SSD. I can peg the CPUs using prime95 and it never goes over 58deg C, although the Zalman goes to 100%. The way you can mount the SSD is pretty cool. The pictures don't show it clearly but if you zoom in you can see two screws hold a door that swings out below the disk drive bays; you hang your ssds on it. I just use one but you could put another. I use the drive bays to store the extra cables from the PS. A modular PS might be mandatory if you wanted to put a drive up there. I'm not sure how that would work. Thanks to whoever suggested putting the PS in first. I'd add that you should route the cables from the front of the case first, and then put the PS in. You might play with alternative ways to route the USB3 cable. Maybe out the bottom of the drive bay and then out the side and back in? or something. I had trouble getting the screw in to hold the lan card in the last slot. It's tucked up underneath the lip and my little Jimmy Deans couldn't quite get to it, at least not easily. I had this motherboard/cpu/etc in another Rosewill case, a TYRFING (where did that come from?) and it wouldn't stay cool for anything. This SRM-01 (how about SMYRFING?) is just what I needed.

Pros: This case mechanically lines up well with reasonable attention to cable routing. Power switch, USBs and audio jacks are in a nice spot mounted to the plastic front bezel. Its black finish is aesthetically well done.

Cons: The Optical Disk Drive slot does not line up with the front bezel of my LG drive. the slot is too wide and the eject switch button completely misses the switch on the drive. It fits in there once I've removed the front shroud from the drive, but getting it to work requires some custom mechanicals with disturbing visual gaps. There's no reset button. It takes a bunch of time to make my DVD drive functional in this slot.

Overall Review: If the front panel ODD slot had more options that didn't require cutting or mechanical adaptors to make it work this would be very well received. If you want to ignore the ODD and leave the plug in this hole it would be a very positive review. For me its only a three because of the hacky appearance and all fiddling I have to do to make this feature work.

Cons: Difficult to maneuver in

Overall Review: My biggest gripe with this case is that you can't install or change the power supply without removing the motherboard. Also, it's set up such that it can be difficult to screw in the motherboard without a very long screwdriver. Also cable management is not all it could be. For the price, these tradeoffs are acceptable. Just.

Cons: wire management not the best but normal for a small case.

Cons: After 35 days power switch stays in when pressed and does not turn machine on 3 out of 4 tries. Very disappointed.

Overall Review: If the power switch worked I would be very satisfied. It gets hung up in its travel.

2 out of 2 people found this review helpful. Did you?
Manufacturer Response:
Dear Customer, We will make exception for you since there is only 5 days after warranty. Please contact our support team at the number below for replacement We believe customer satisfaction and word of mouth are crucial in sustaining business. Phone: 1- 800-575-9885 Email: rma@rosewill.com Email2: techsupport@rosewill.com We look forward to hearing from you. Thanks Rosewill Customer Care
Charlotte A.
Ownership: more than 1 year
Verified Owner
Solid4/3/2020 3:36:22 PM

Pros: You get way more than you paid for. Nice swing tray for the drives, and access behind the motherboard is a nice bonus that should be out of range for the price. Not nearly as sharp as you would expect a cheap case to be, safe to reach behind. There is a third fan mount in the front of the case. It looks like it should just breath from,and blow into the case, but somehow it does pull air from outside the case. (tested by using as the only fan, temps were not effected)

Cons: I/o shield wanted to fight me quite a bit while installing, but it happened. Front fan mount can only be used to pull air into the case, and Isn't super obvious in a black case. (especially when the product claims to only mount 1 additional fan lol), and it does not look like it would work. I had to test it believe it pulled.

Overall Review: It won't let you down. 10/10, already bought again.