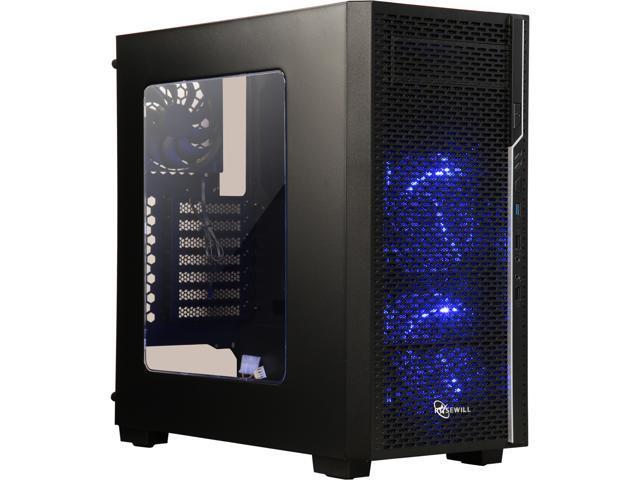 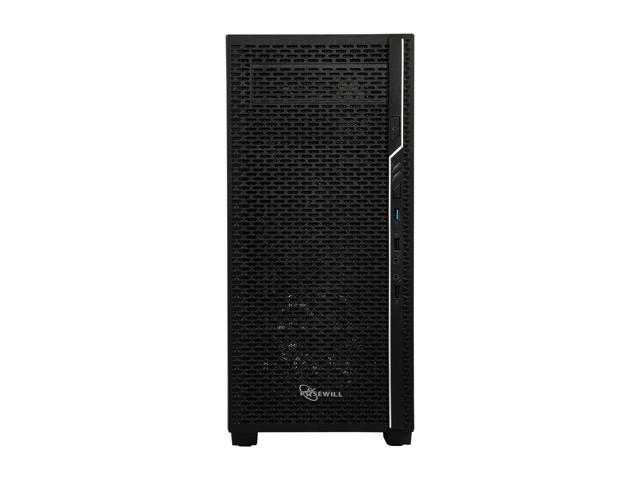 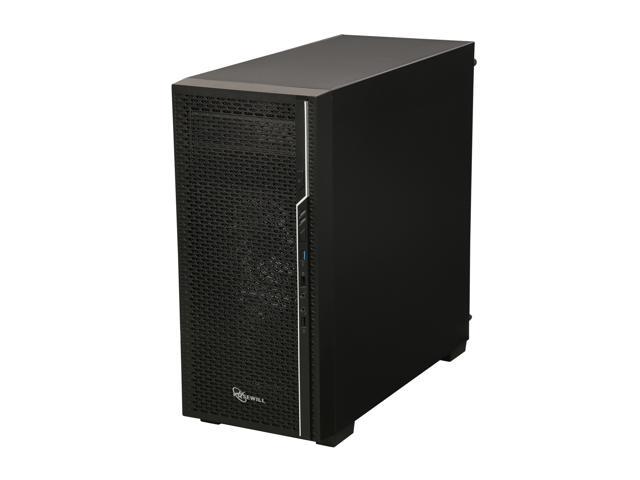 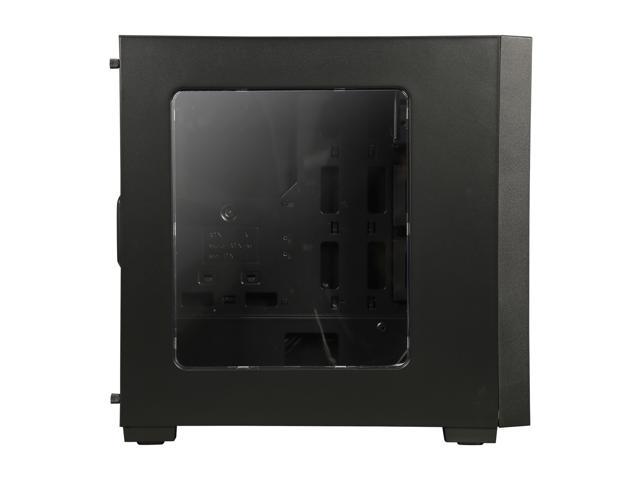 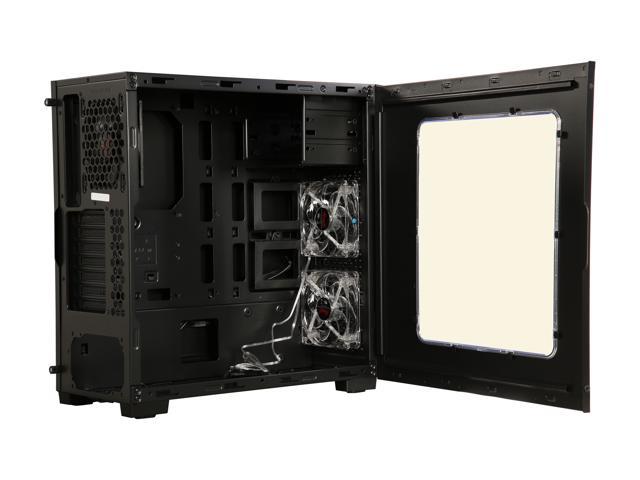 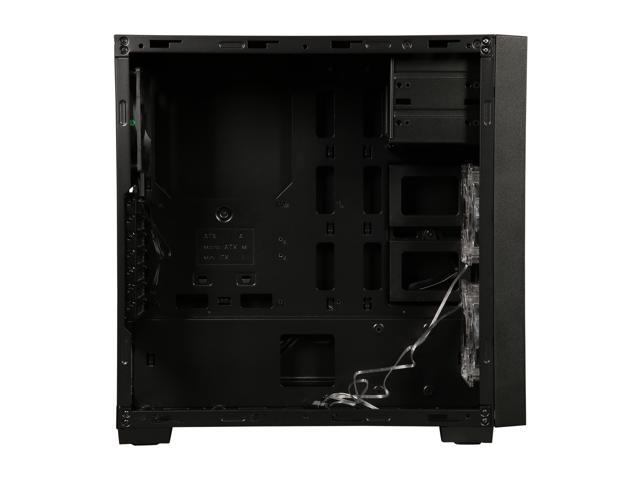 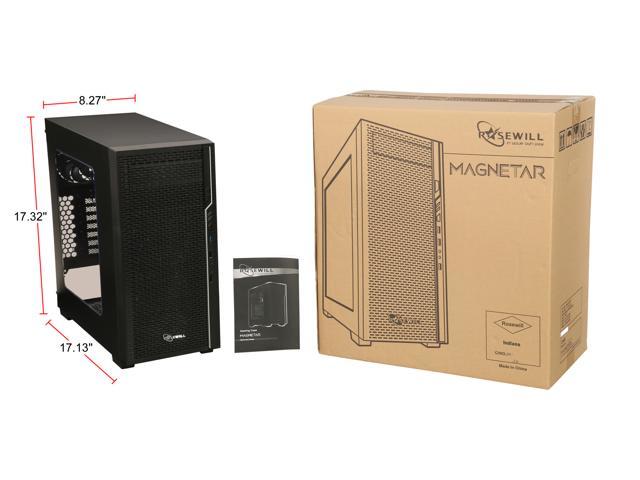 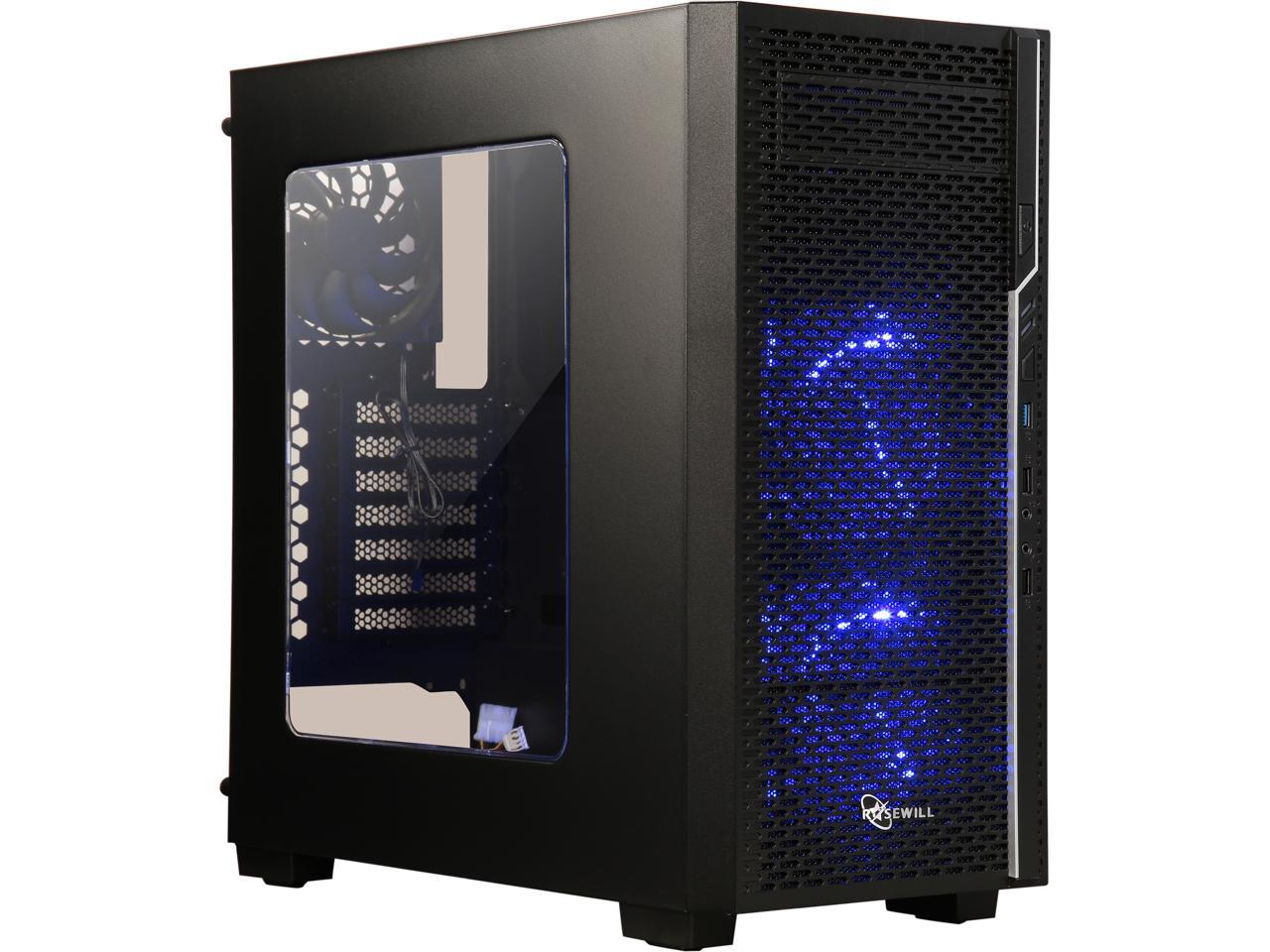 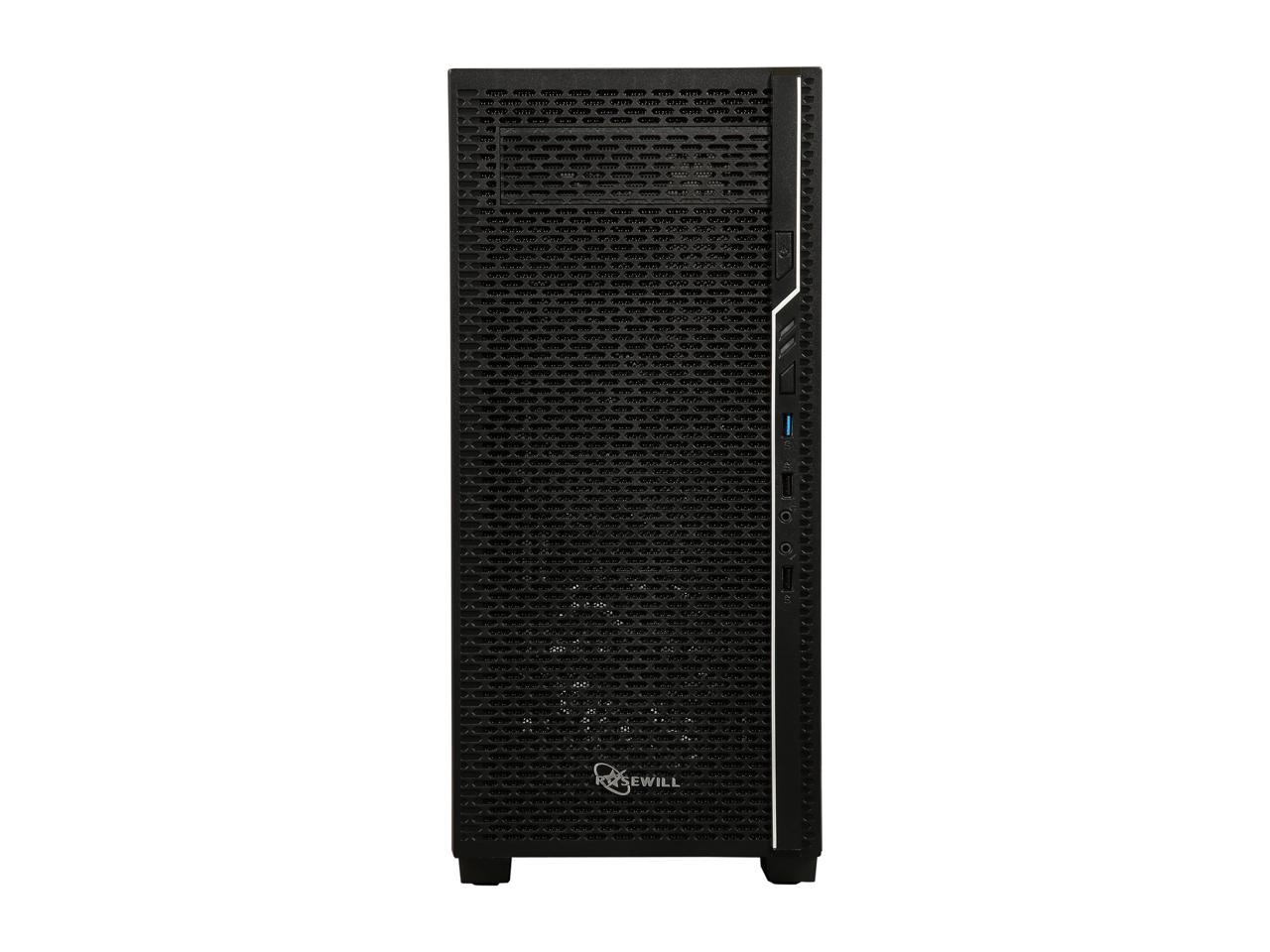 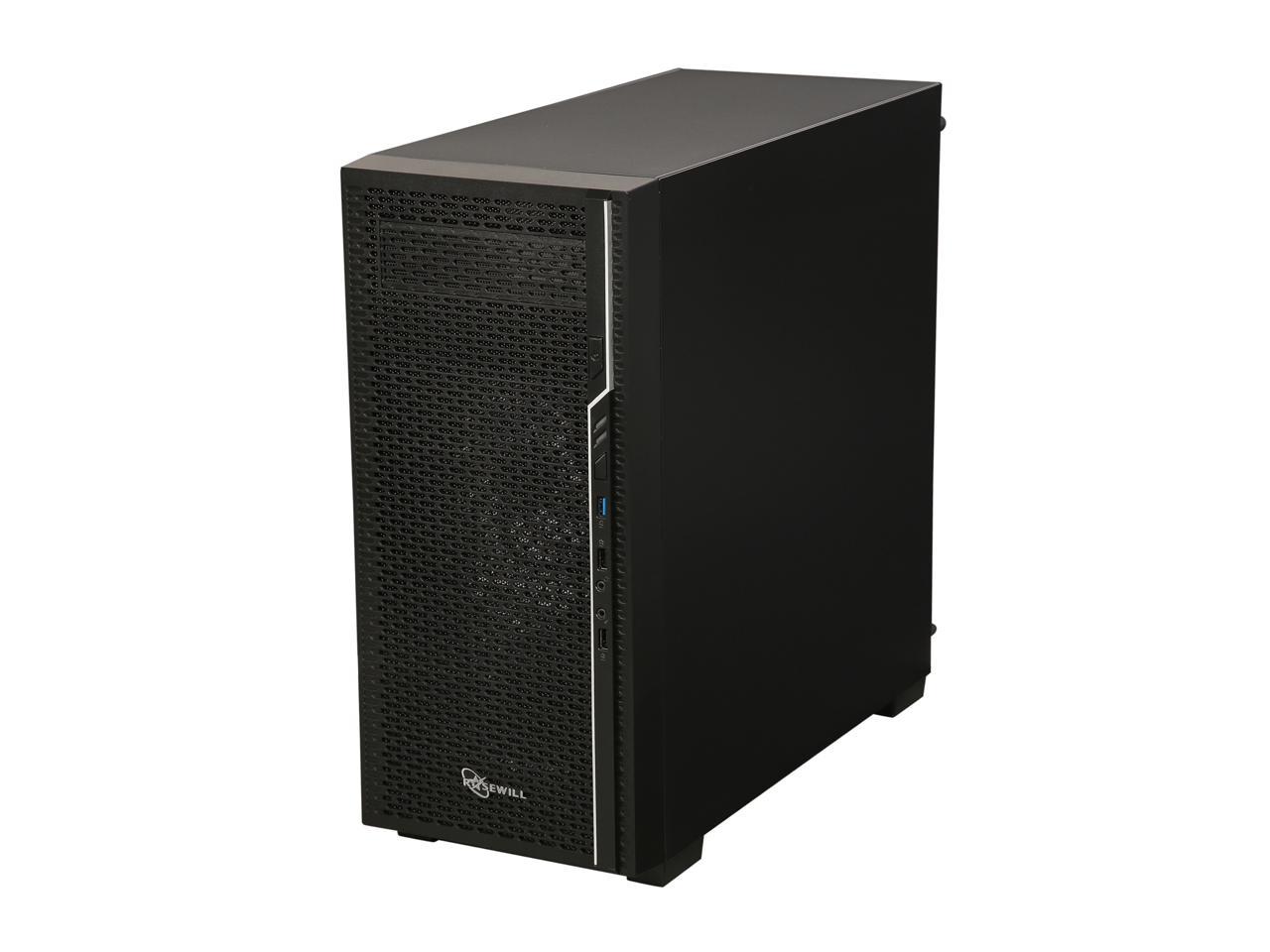 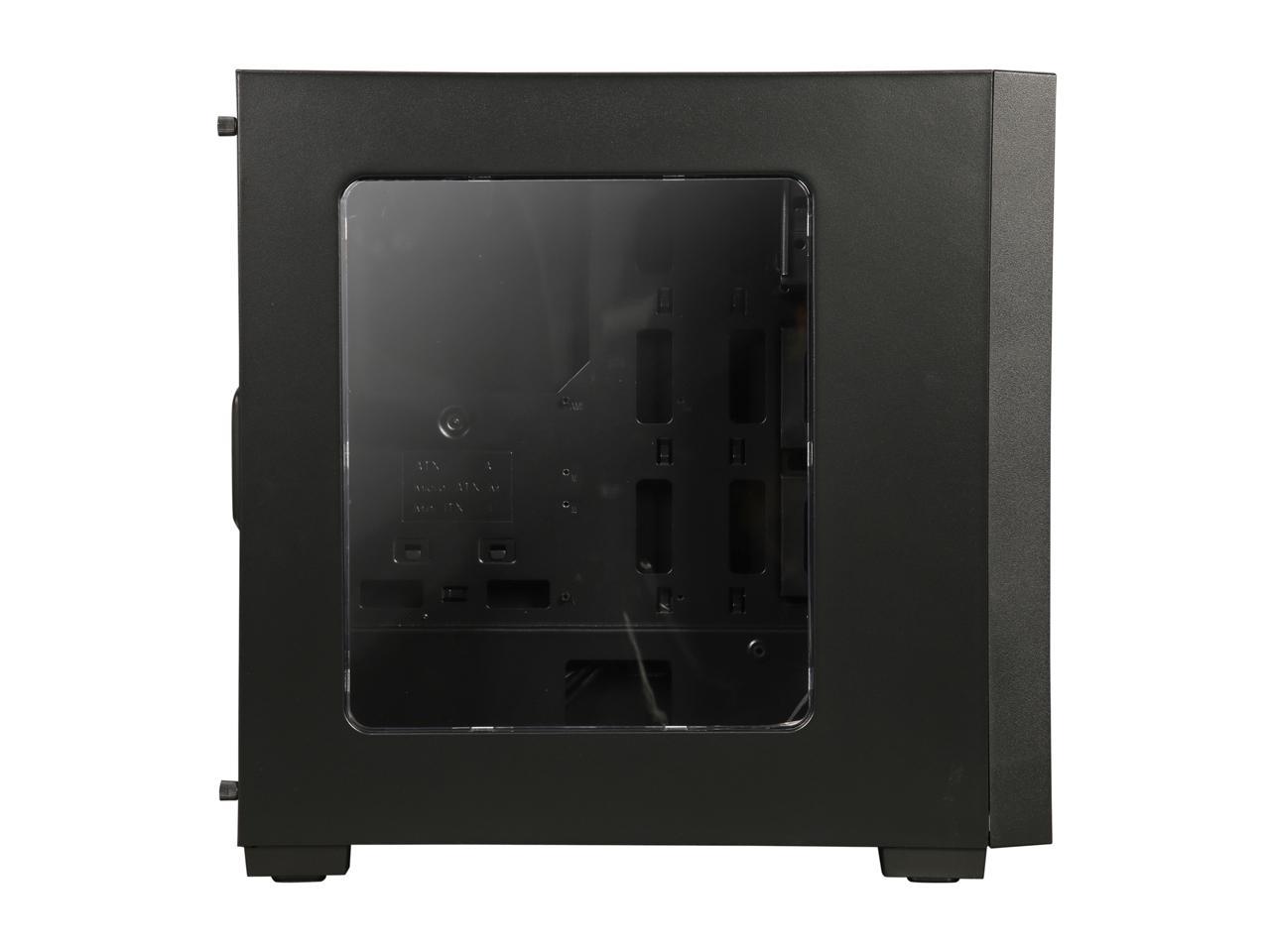 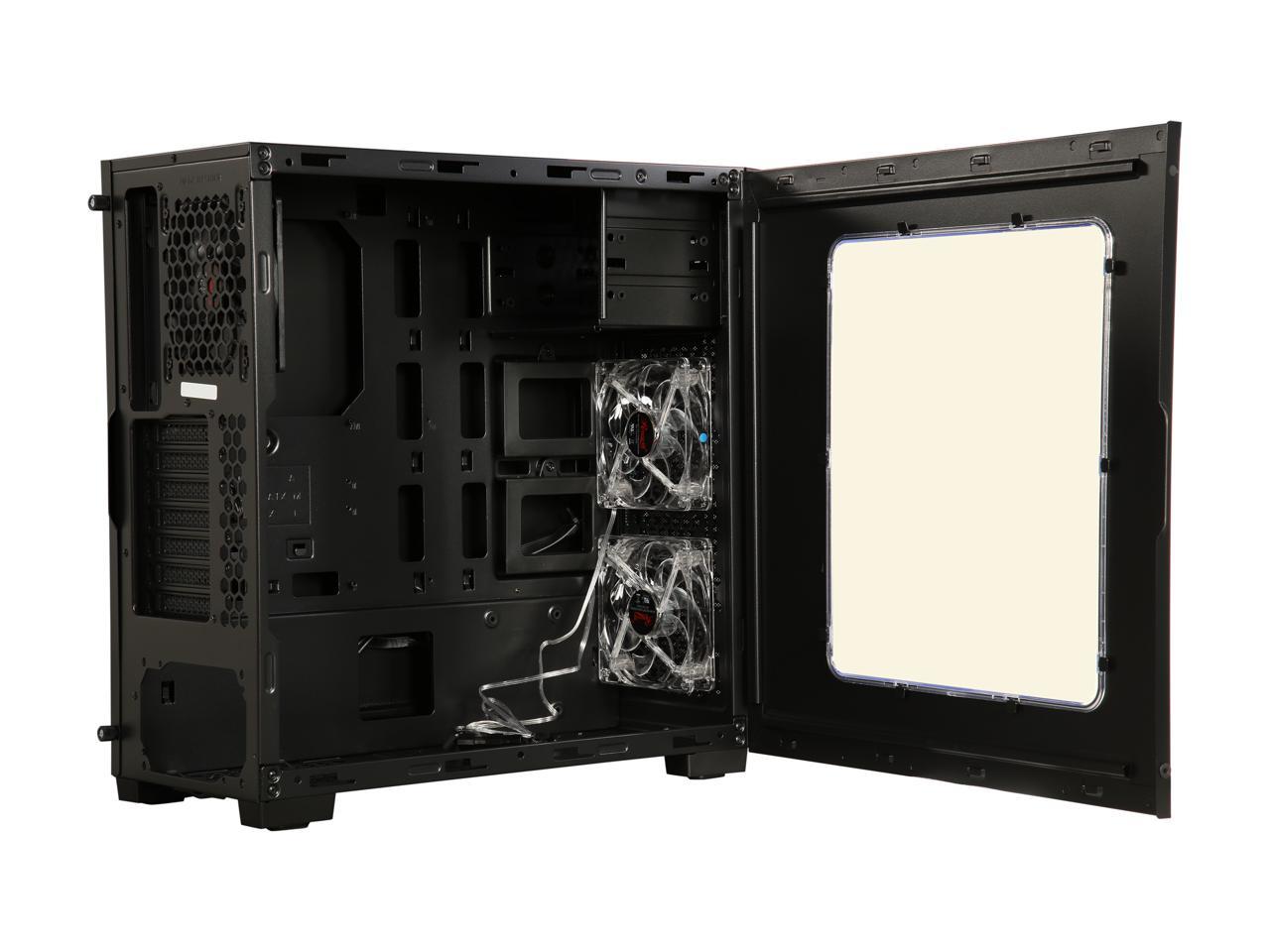 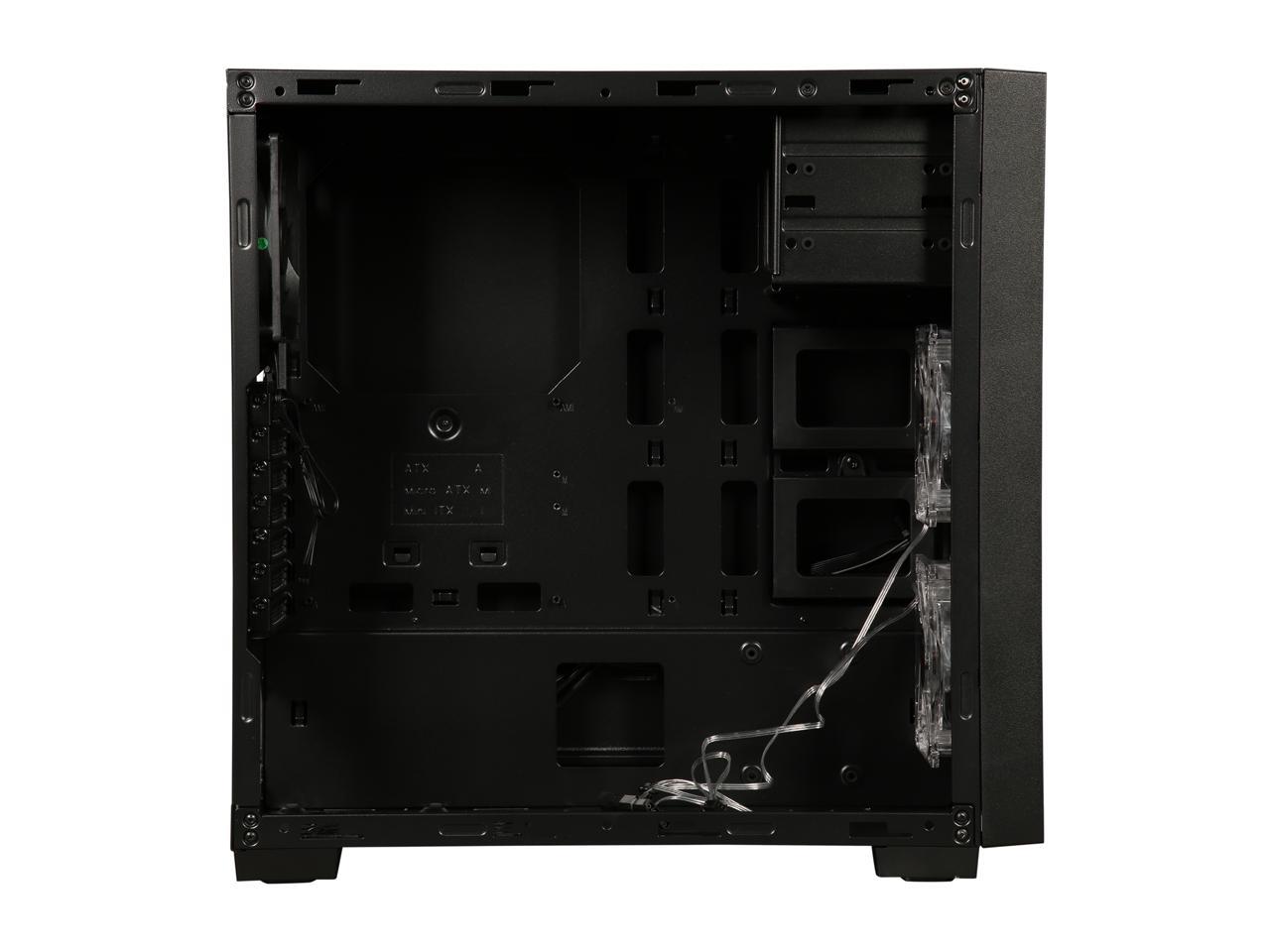 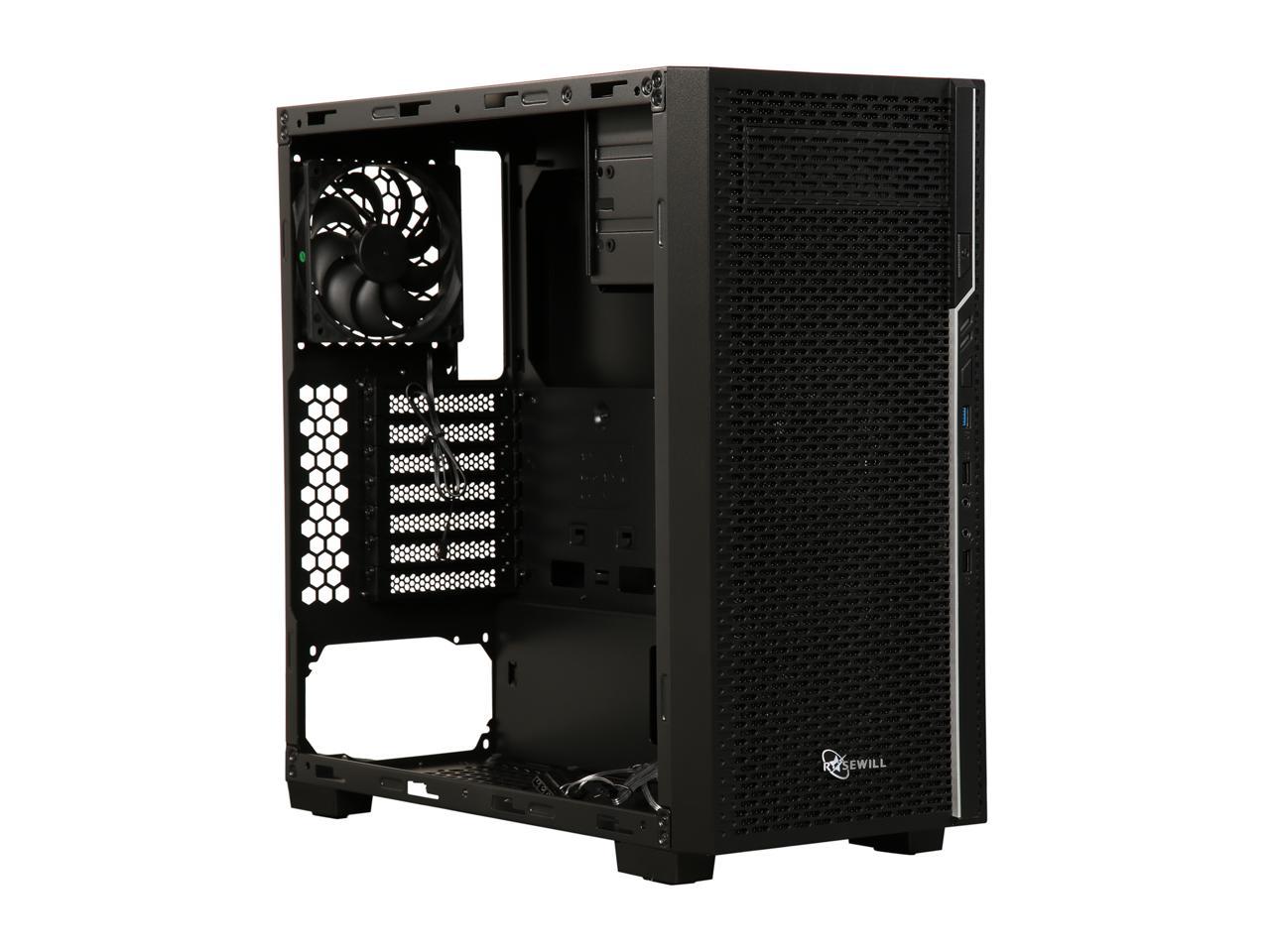 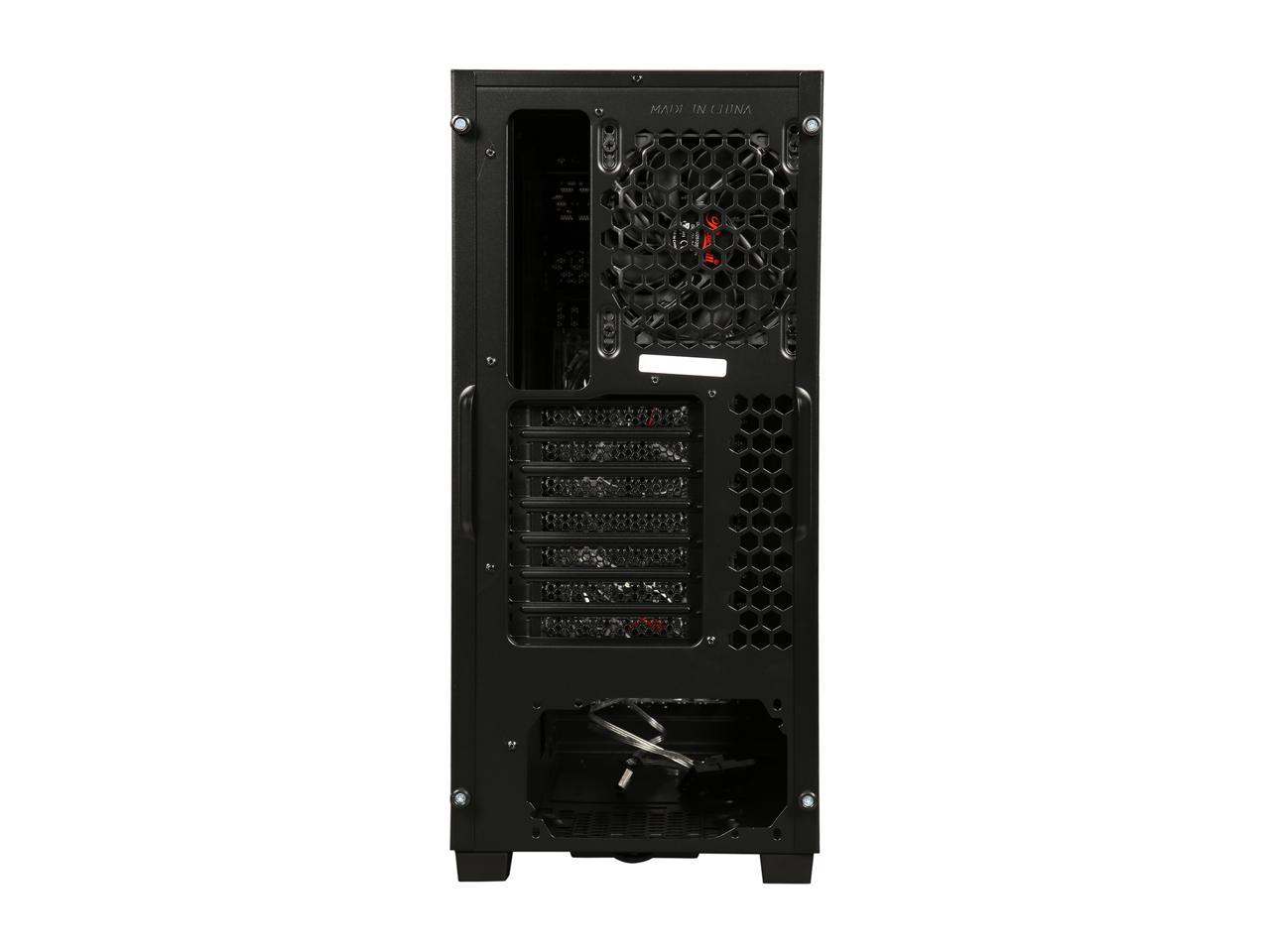 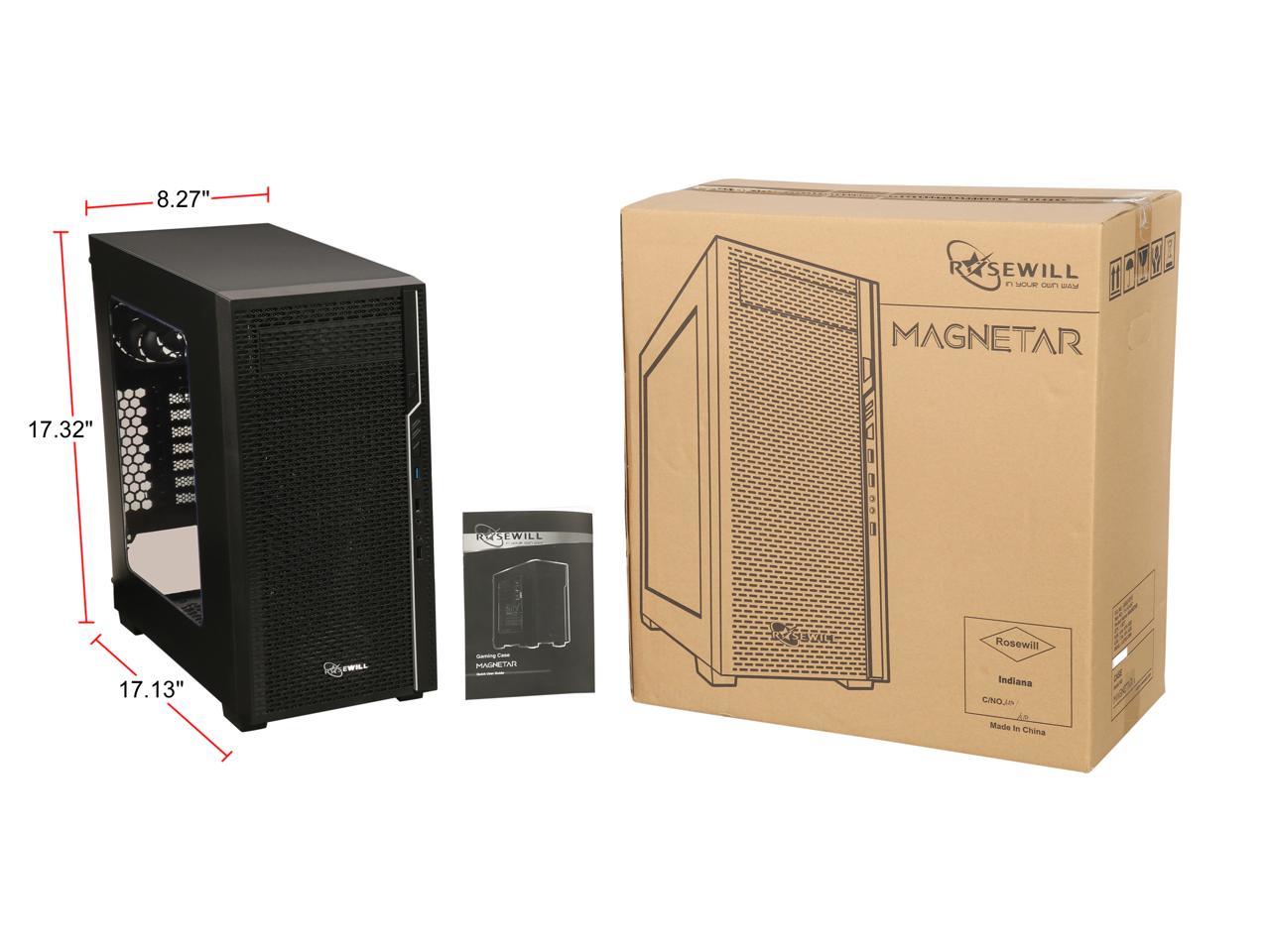 (14) Write a Review
OUT OF STOCK.
LOADING...
Overview
Specs
Reviews

MAGNETAR is a compelling case with amazing airflow, incredible space, stunning looks, and more. A magnetar is a type of neutron star that, despite its small size, has an extremely powerful magnetic field. Similar to the star, the Rosewill MAGNETAR allows users to build astonishing power within a sleek mid tower PC case.

The MAGNETAR's spacious design supports a CPU cooler up to 165mm tall and up to a 400mm long graphics card. Additionally, its advanced construction offers a gap on the right side of the case (2.7 cm – 4 cm) that allows for easier cable management. The ATX Mid Tower Case offers tool-less installation of the 2.5" drives and 3.5" drives for a hassle-free build. Plus, the case has a bottom-mounted dust filter that protects the power supply from the threat of dust. Display the impressive components of your build with the MAGNETAR's side window panel. Learn more about the Rosewill MAGNETAR

Pros: All things considered it has a good look about it (of course that’s an opinion). It’s an in-between-er on quality. Some towers are built with heavy steel, and have a strong sturdy frame. The Magnetar strikes on the middle ground, not being flimsy, but not being super sturdy feeling. There is plenty of access to route cables through cut outs making this a pretty simple to work in tower. Plenty of room for GPU and tall CPU coolers adds to the allure of the fairly open easy to work in design. 5.25” bay drives. One insert on front panel, the drive cage is oversized, and while some people will appreciate these bays, they largely are a thing of the past, and feel like a poor use of space in the tower. (I’ll mention this cage in both sections because it’s a love hate thing, some people may want 5.25” bay cage for internal drives). The Magnetar does impressively support a rear 120mm rad, and 240mm in the front. If you want to pull the 5.25” drive bay out, it allegedly will support a 300mm rad no problem (but I don’t use a rad that big). It’s not glossy, that’s a positive mark worth mentioning I suppose. An included dust filter is the biggest of the luxury features the tower has. It is a pretty decent filter, unfortunately it pulls from behind the tower. Not a huge deal, but a side tray or front removal might have been a more considerate option.

Cons: Ugly fans. The days of the clear plastic static color loud fans I feel should have come to an end a long time ago. There are so many affordable and great options on the market. Rosewill even has some pretty decent fans they could have strapped in here instead of these. Strange 5.25” bay drives with twin slots but only one cut out for the top. These bays are somewhat less used these days. Removing it is what I would recommend, seeing one in a tower still makes me cringe. If you need to use CD’s/DVD’s, external drives are the way to go (I Velcro mine under the desk). The side panel came wrapped but was still scratched under its protective peeling plastic. This will take the excitement and turn it to dismay pretty quickly. Sometimes these things happen, but it’s still unfortunate when it does. Cable management isn’t the greatest, but it isn’t awful. A shroud would have been a big plus for this, alas there is no basement power supply shroud. You’ll be able to see the cable mess from the PSU at the bottom of the tower through the acrylic side panel. My power button was missing. The switch for it was secure in the hole, but the plastic power button you depress to actuate the switch was not on the tower. The whole unboxing experience was a bit of a disappointment. It felt like one thing after another was wrong with it.

Overall Review: I would have liked to see some rubber grommets on all of the cut outs. It would have been a much cleaner look inside, and help minimize the cable mess. USB on front IO is a little lack luster. I would have liked to have seen all USB 3.0. Hanging thumb screws I don’t think is asking much these days. The simpler a tower is to work with the better. The little things make a big difference. The tower itself has a nice clean look, but also has a very generic look to it…I guess what I’m trying to say is it feels like more of the same thing we see all over the place, but with a higher than expected price considering some of the premium competition Rosewill faces. In combo deals, it's a worthy toss in, as an individual purchase...it leaves some to be desired for the price. I know Rosewill can do better.

6 out of 16 people found this review helpful. Did you?
Manufacturer Response:
Dear Matt, We appreciate your purchase. We have forwarded your valuable feedback of the MAGNETAR design to our product management for review and please rest assured that your feedback will receive the attention it deserves. We will continue improving our products in future. Thank you. Phone: 1- 800-575-9885 Email: rma@rosewill.com Email2: techsupport@rosewill.com Thanks, Rosewill Customer Care
Joshua R.
Ownership: 1 week to 1 month
Verified Owner
Easy to build, good design8/25/2017 11:11:35 AM

Overall Review: Got this case thrown into MB deal at newegg, was actually the easiest build I've ever done. Front panel connections are few, but thankfully very easy and reliable to set up. Really well designed. I would easily have spent a lot more on a case but this turned out to be just what I needed. Impressed with the design and value. Glad I got it and decided to do build with it.

Pros: I was looking for a case for my home build with using an ATX board. Most cases were either too big to fit in my desk's PC cabinet or were too small to fit an ATX board. I found this case and it was the perfect fit. I got it on sale for around $60. And what great features! - Plenty of room to work in, my ATX board fit nicely. - Nice cable management spaces and cut outs - Still has a space in the front for a CD/DVD drive (as I prefer an internal optical drive) - Can install the 3.5 and 2.5 drives without attaching them using screws (very quick install) - Case is more than sturdy enough. After all, I'm not using it as a step stool! - The fans provide good airflow and are very quiet. - The overall fit and finish of the case is good. No scratches or sharp edges. - There were no missing parts and had plenty of hardware for installation. Just a nice case for your basic to upper intermediate build.

Cons: The only con I found was that the acrylic window is prone to scratching. I should have left the protective plastic sheet on until I was finished with the build. Of course I have it in a cabinet anyway.

Overall Review: I wouldn't hesitate to buy this again or recommend it to someone else.

Pros: the ssd/hdd on the back of the motherboard trey.

Cons: cable management leaves something to be desired but not the worst I've seen bit hard to get a full size atx motherboard in

Overall Review: Wish I would have waited a few days and got it for $25 less although it is a good case for what I paid for it. While this woulden't be my first pick to recommend to someone I wouldn't tell them not to buy. A full size atx board fits in a bit tight though. I do like the mounting options for ssd/hdd on the back of the motherboard trey though

Pros: Space space and more space. With the harddrive holders on the back, there's tons of free space in the main compartment. For someone with big hands, this made building the machine a snap.

Cons: It's a little light weight, but I'm not exactly going to use it as a weapon so it's not a big deal to me.

Overall Review: I would recommend this case to anyone needing space and ease of building.

Cons: - Missing power / reset switch covers... lost 2 eggs for that. Wouldn't have been a deal if another purchaser didn't also have the same issue, but cmon guys..

Overall Review: hopefully I don't have to jump through hoops to recieve replacement pieces?

Cons: Cords for fans at the front are hard to hide for good cable management.

Pros: I like this case overall. I used this for my first pc build and Its bigger than I thought it would be. lots of room, three fans seem to be enough for my setup. The led fans are actually a nice touch, I was worried they would look gaudy, but it actually looks very stylish. For what I paid, I think It has great features. Overall good case for the price, and its very well built.

Cons: The front I/o panel microphone port is inoperative. Static at all times. Same microphone connected to the rear microphone port works and has no static. Pretty disappointed in that, because I tend to like to chat with friends while gaming. From the looks of other reviews, this case seems to have a lot of issues with the front I/O.

Overall Review: Overall this case is good for someone on a budget who wants features similar to what this provides. If that pesky microphone port just worked for me I would absolutely recommend this to anyone looking.