Feel 100% satisfied with your purchase -- with no restocking fees & no return shipping costs* within 30 days of delivery. Learn More
Price Alert
Add To ListFound on 105 wish lists 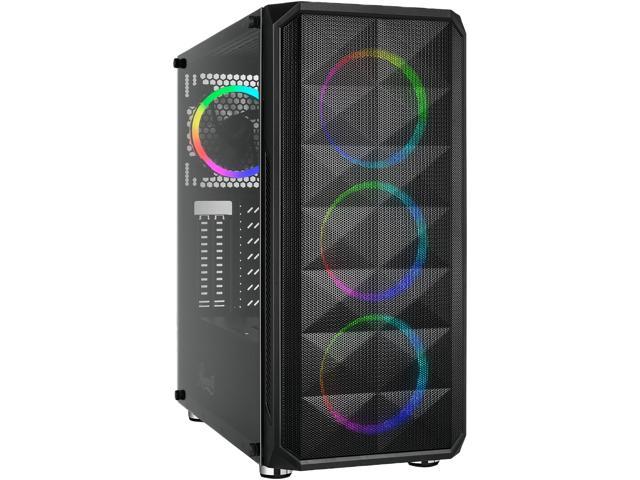 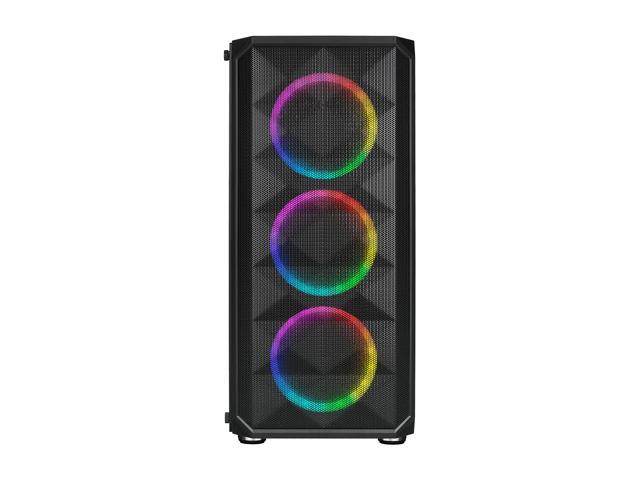 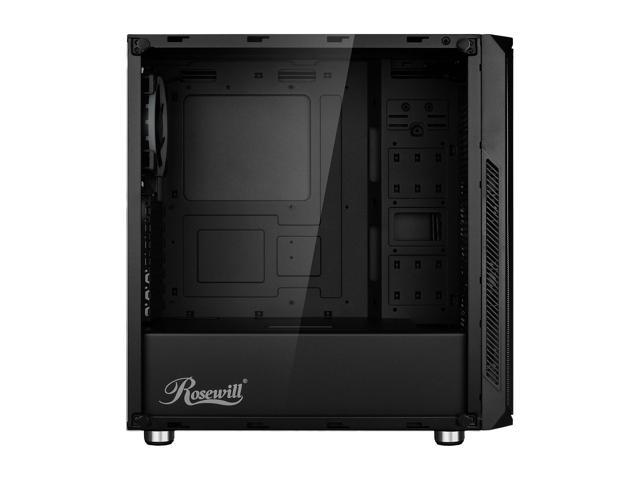 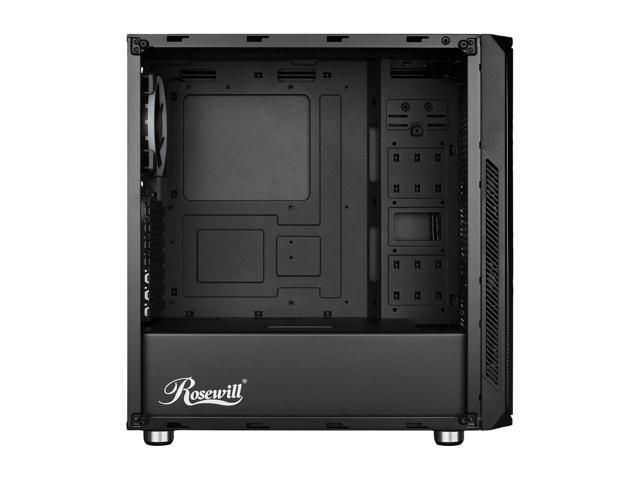 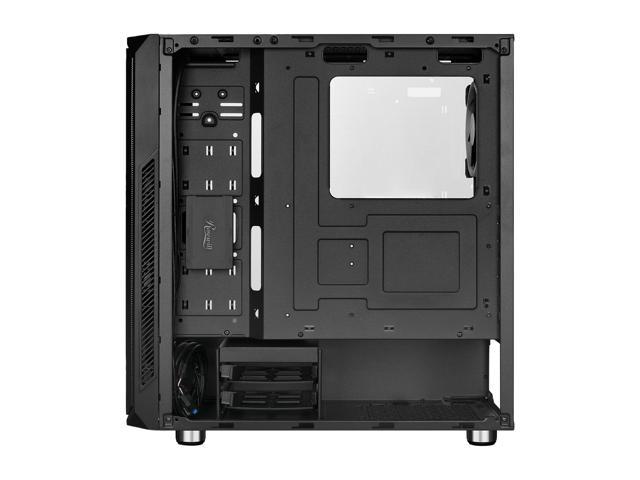 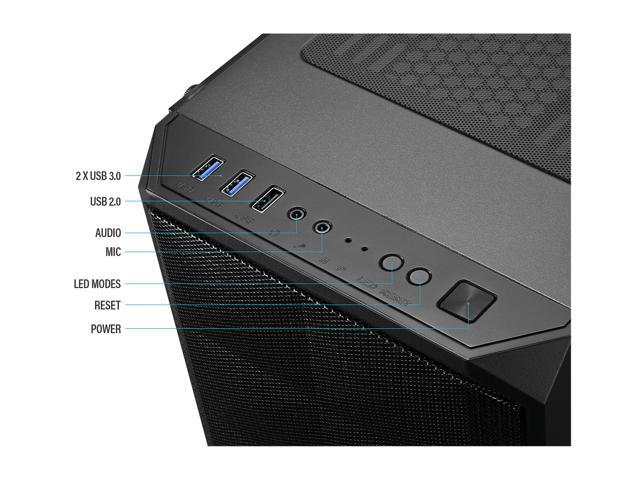 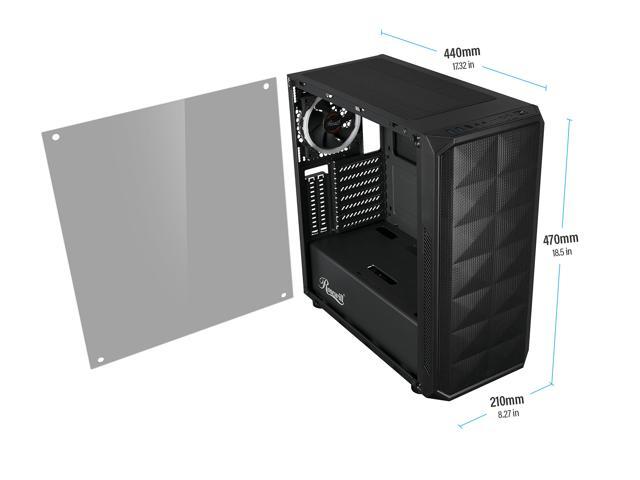 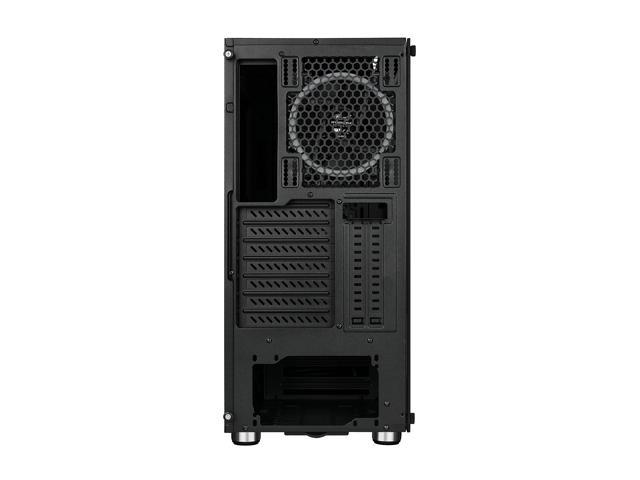 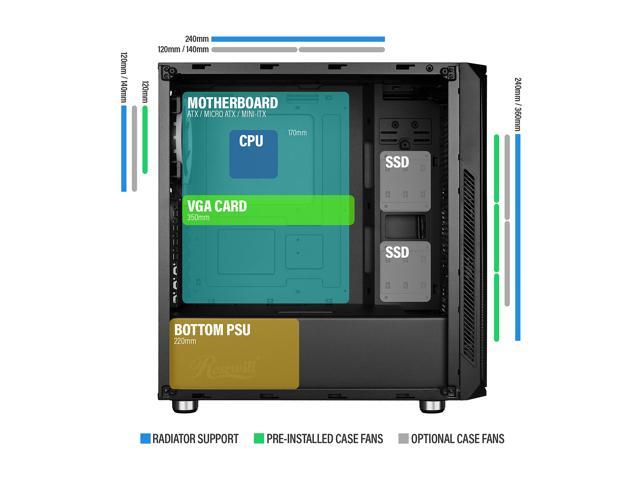 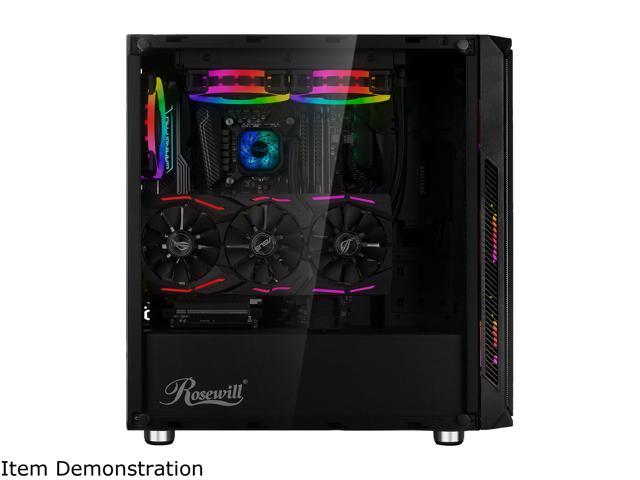 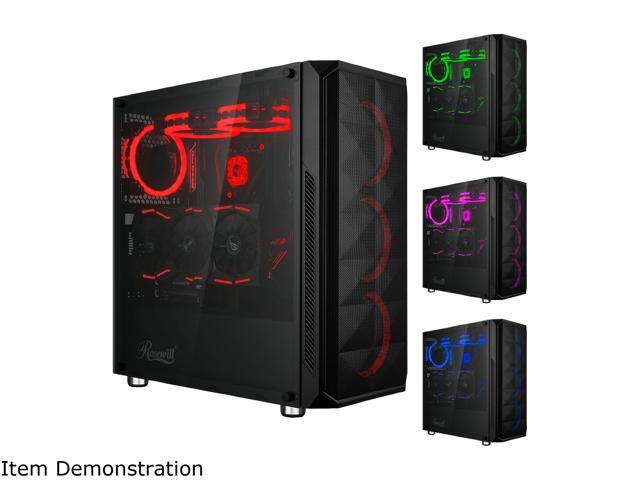 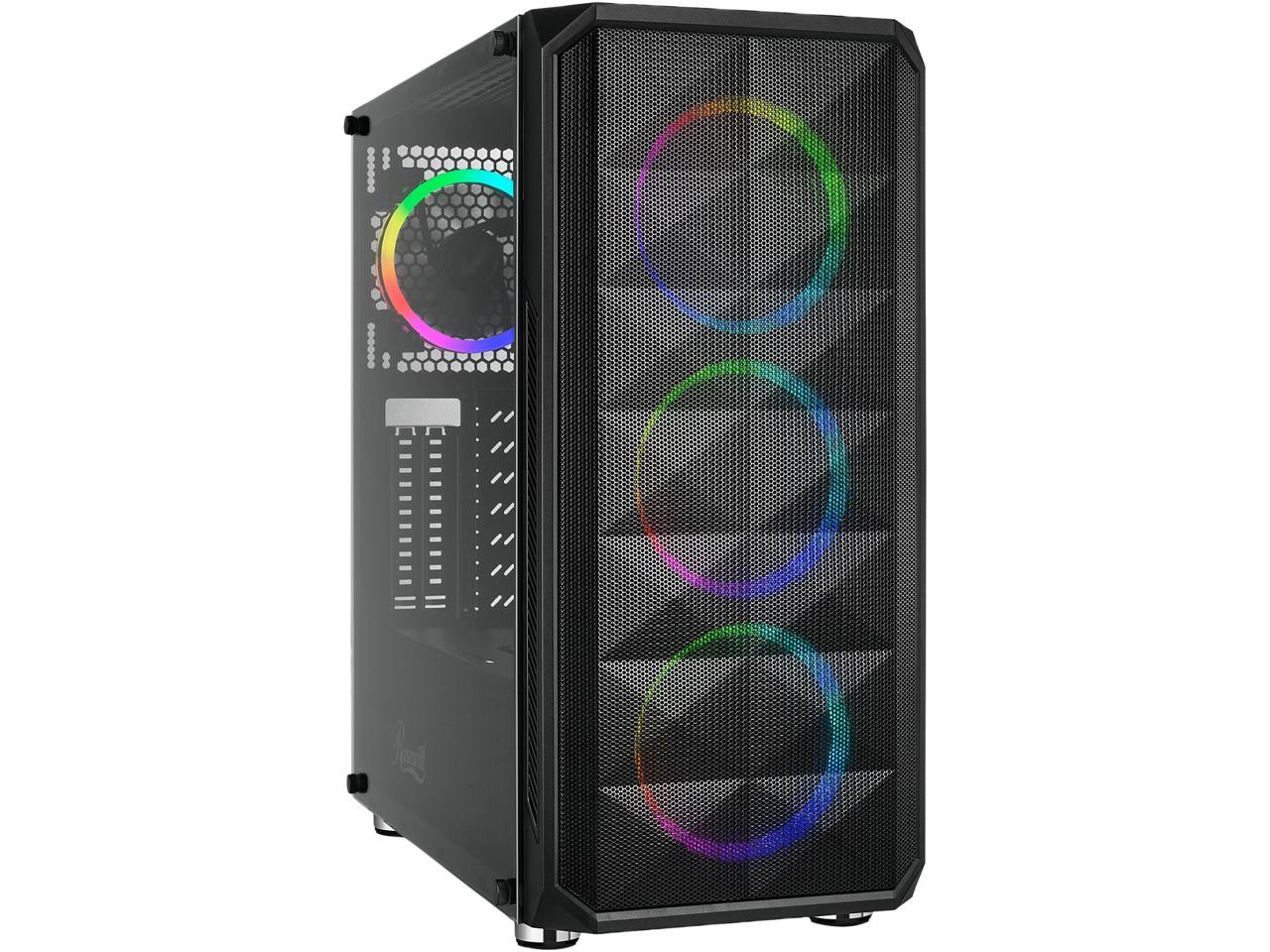 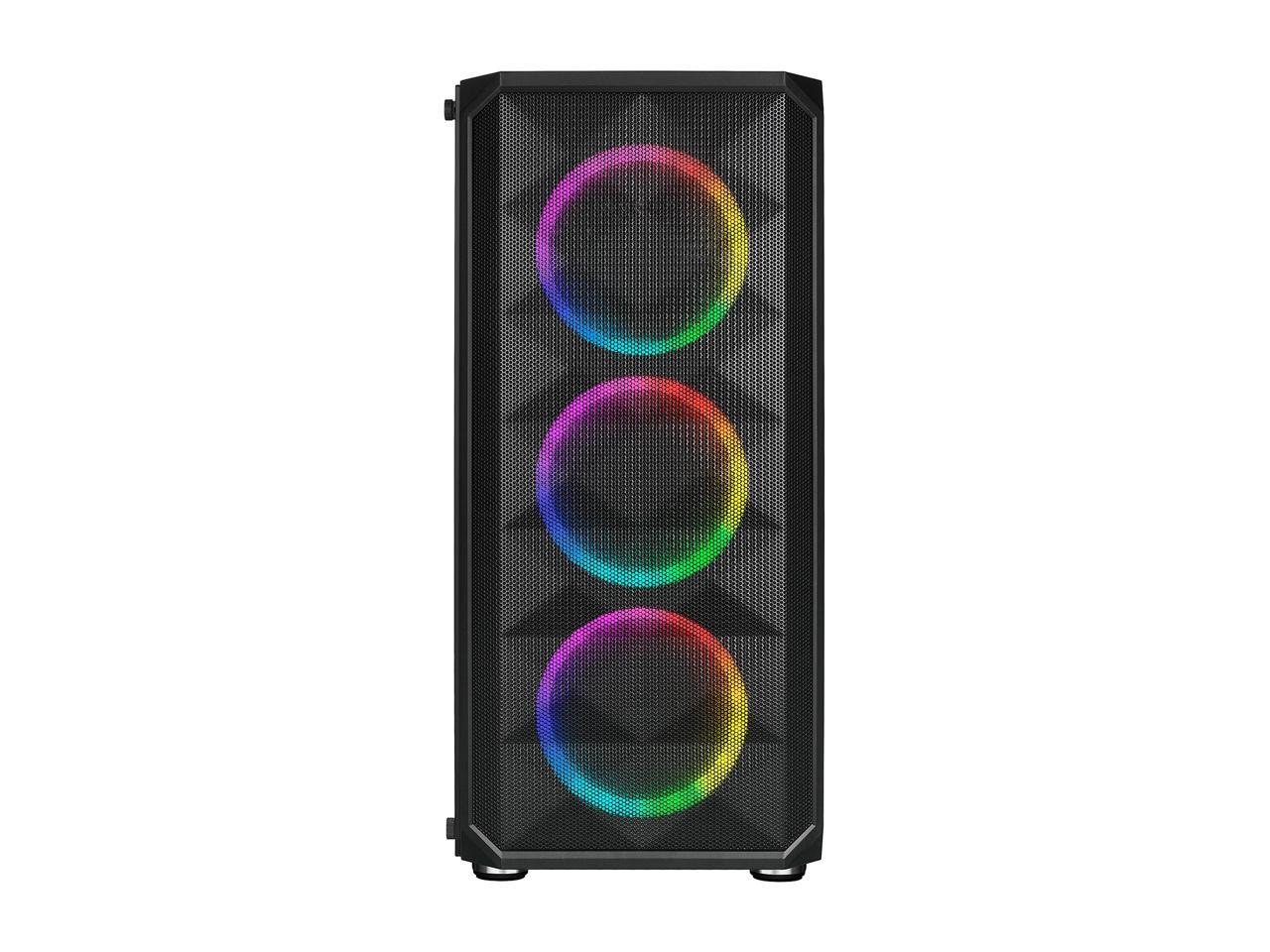 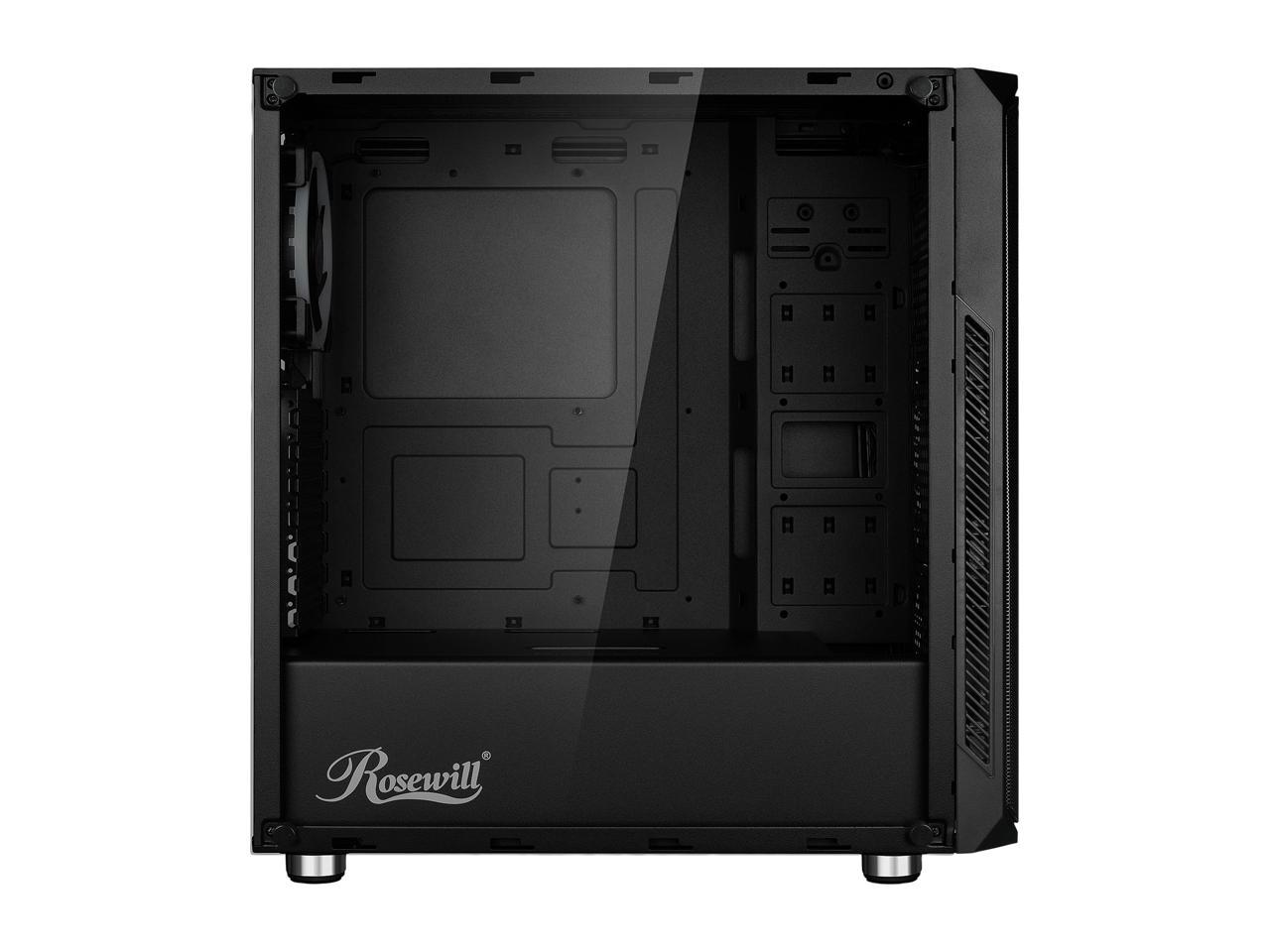 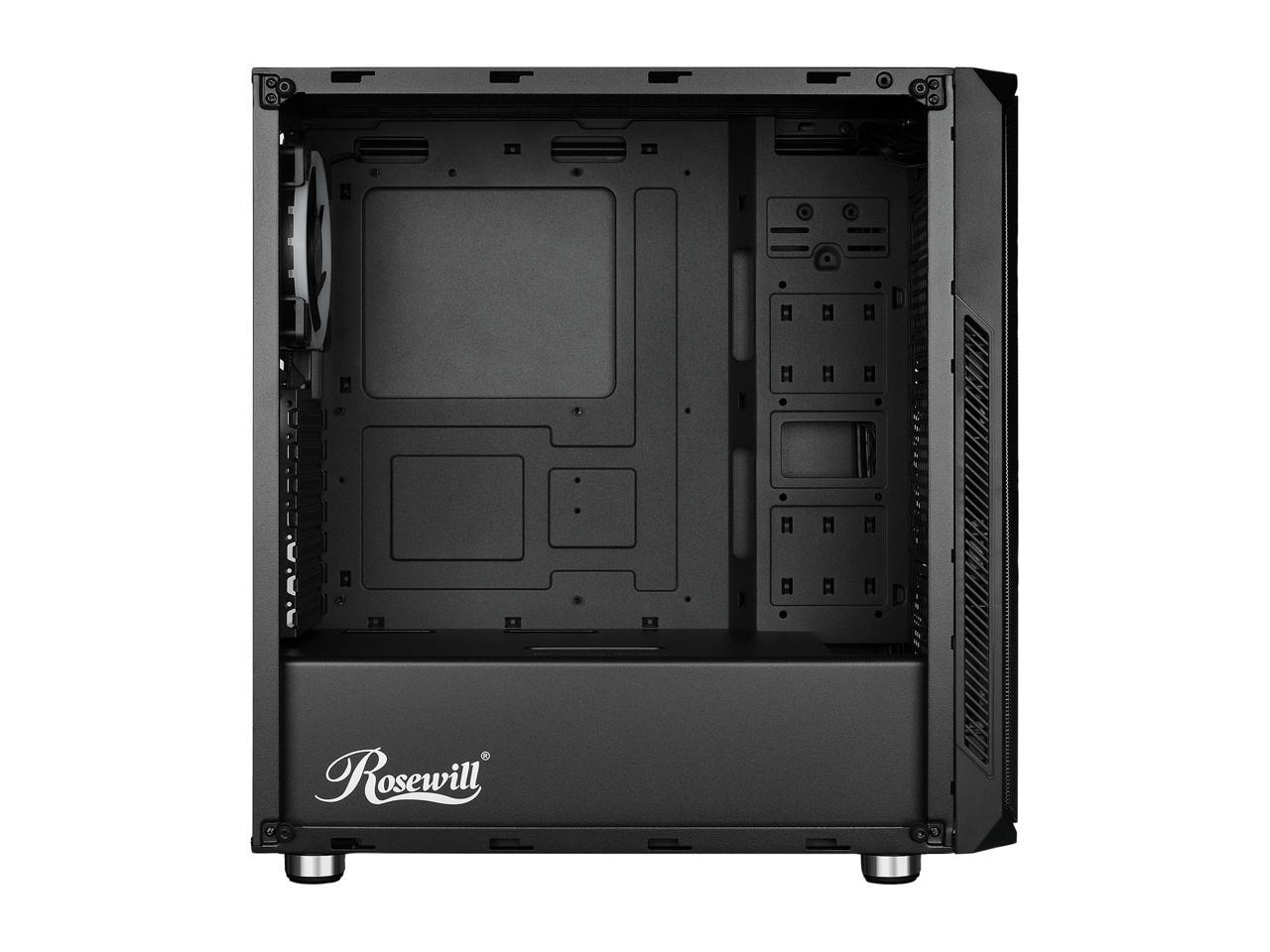 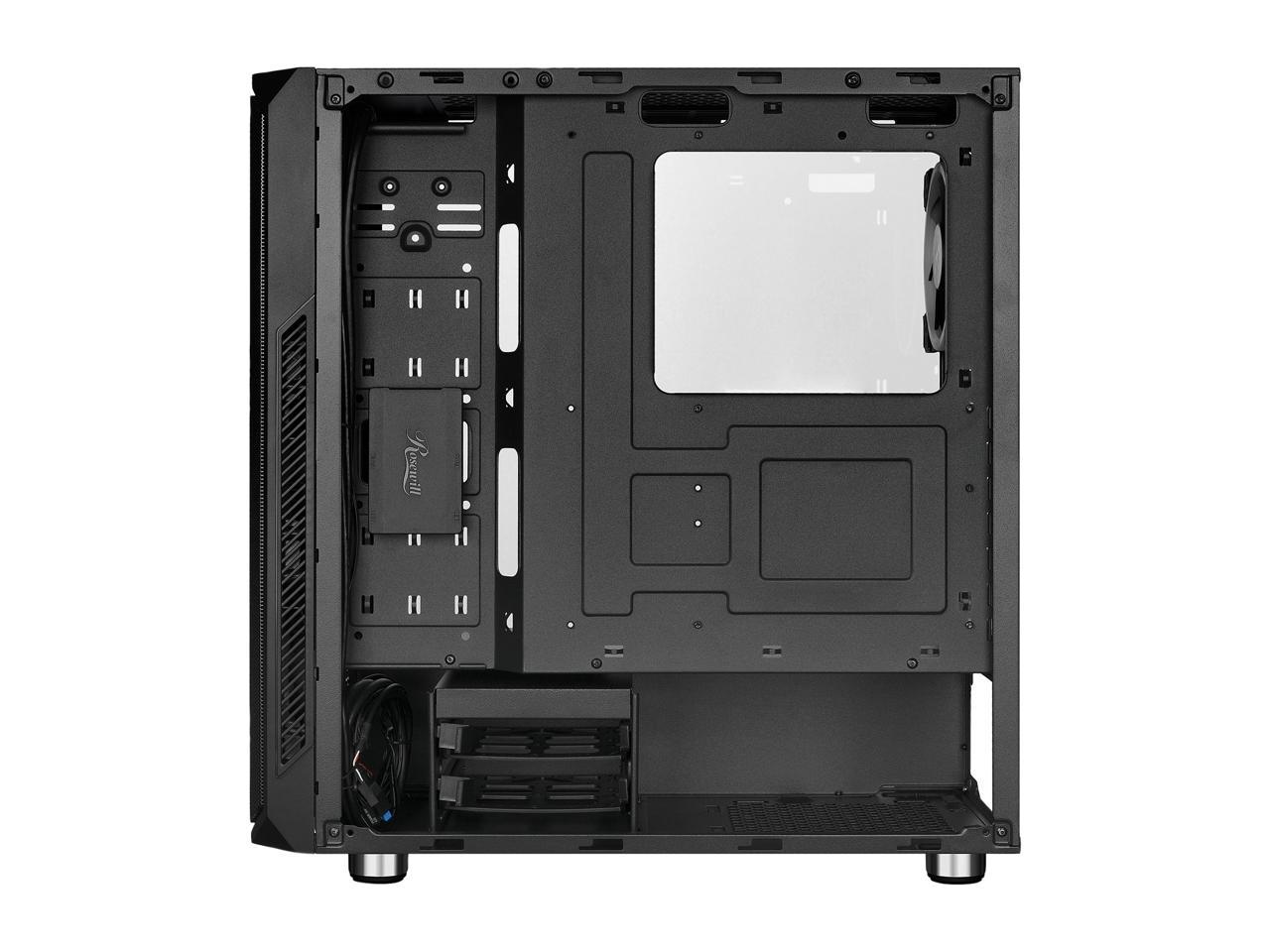 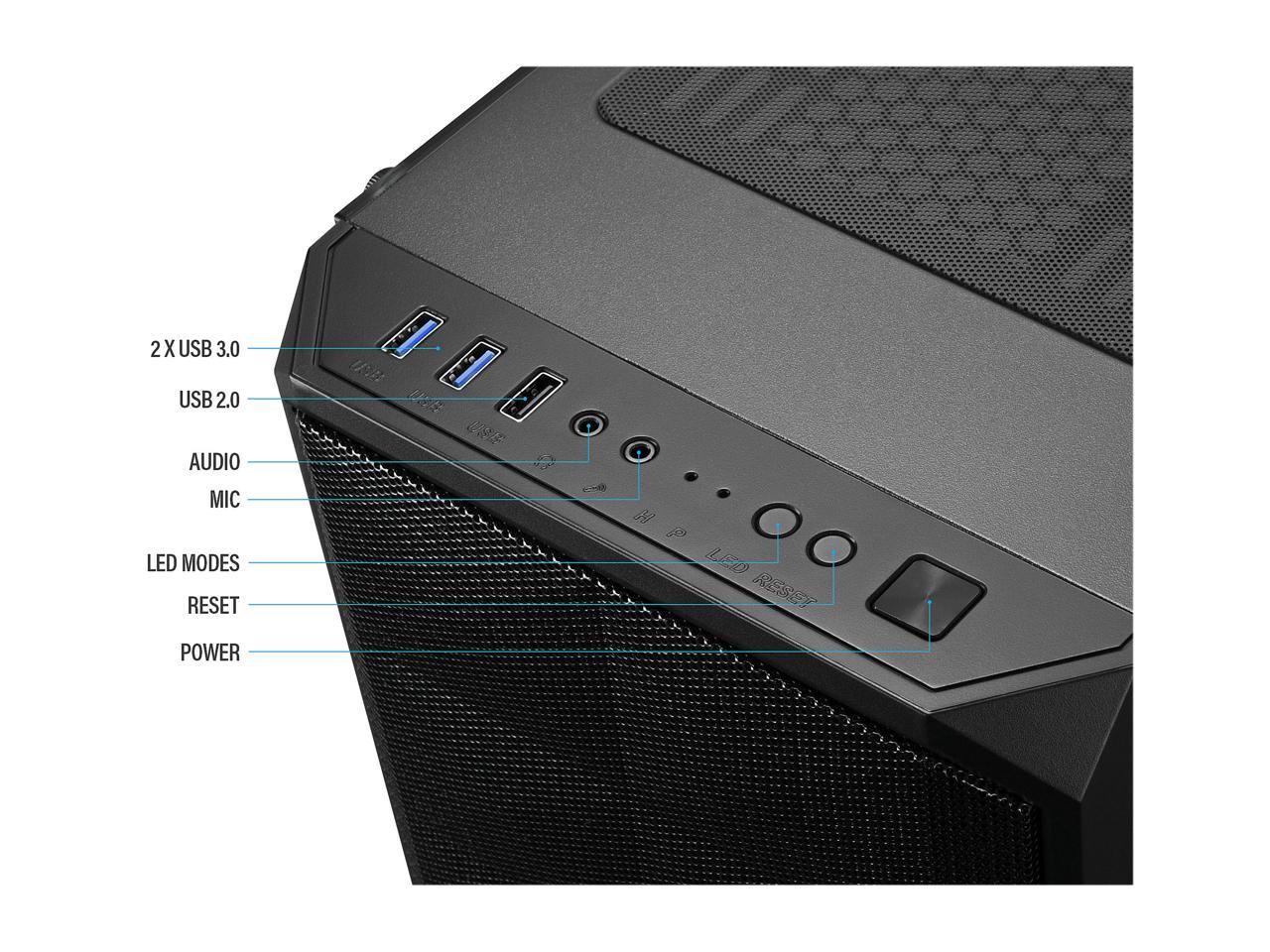 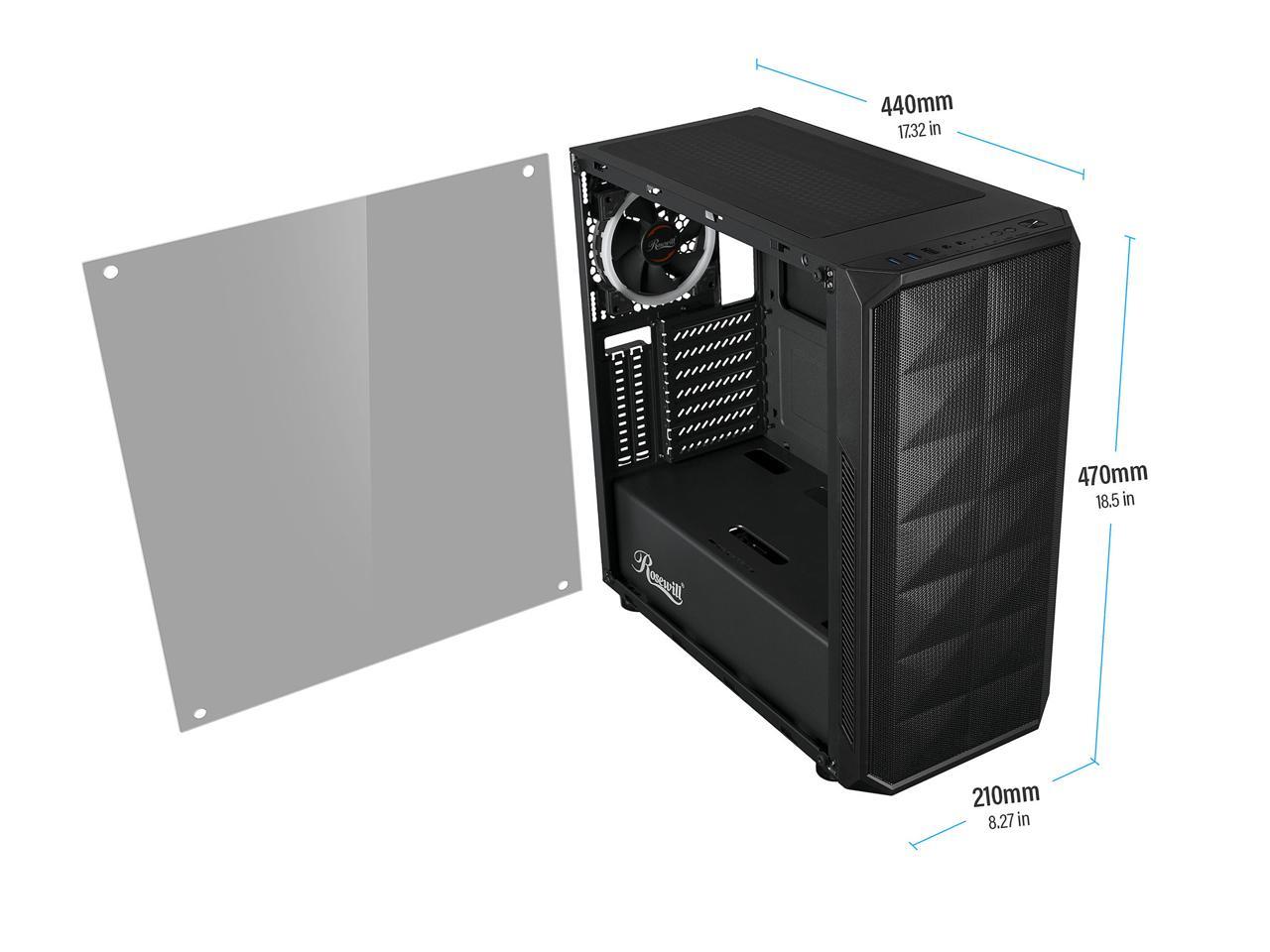 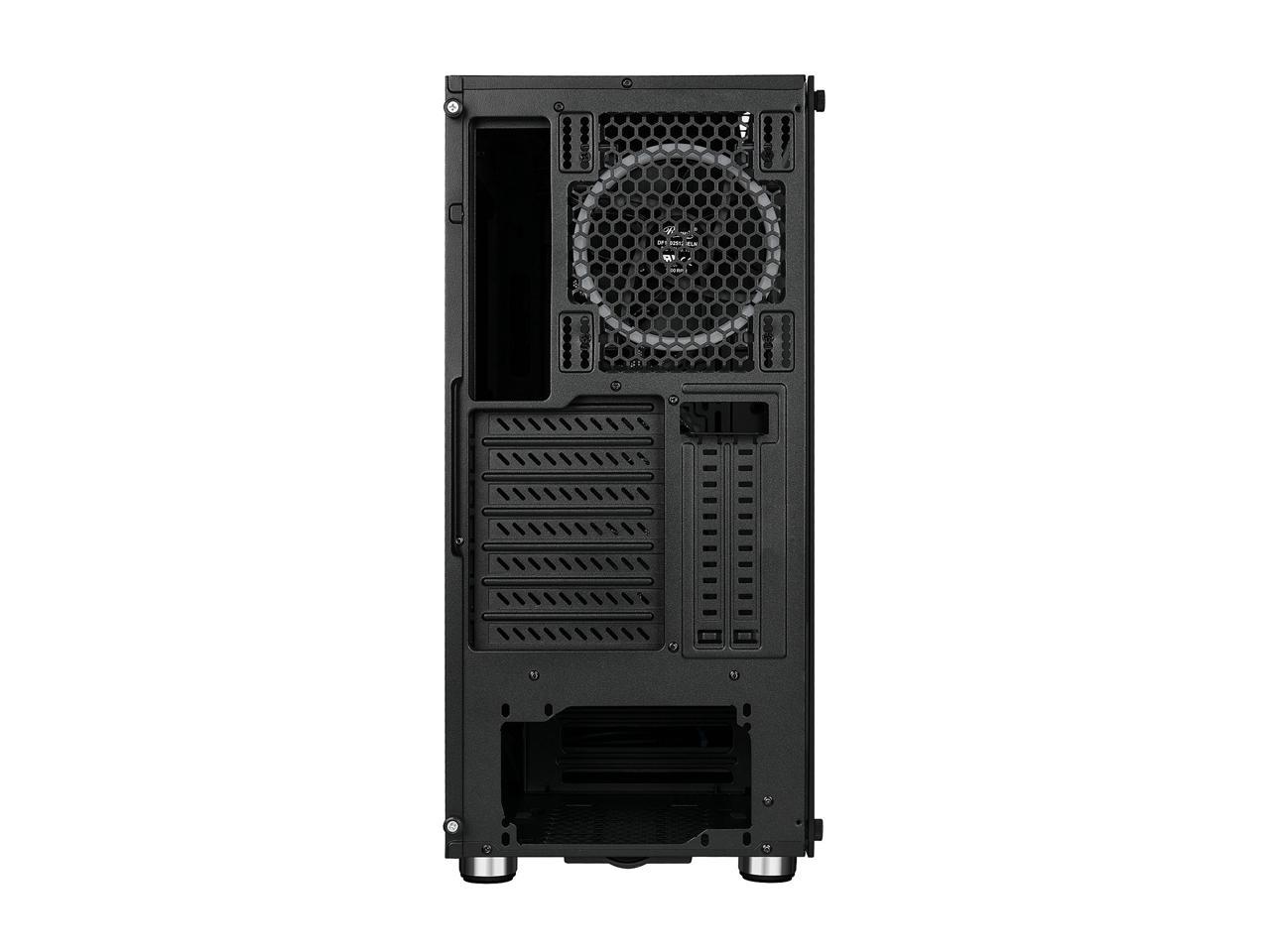 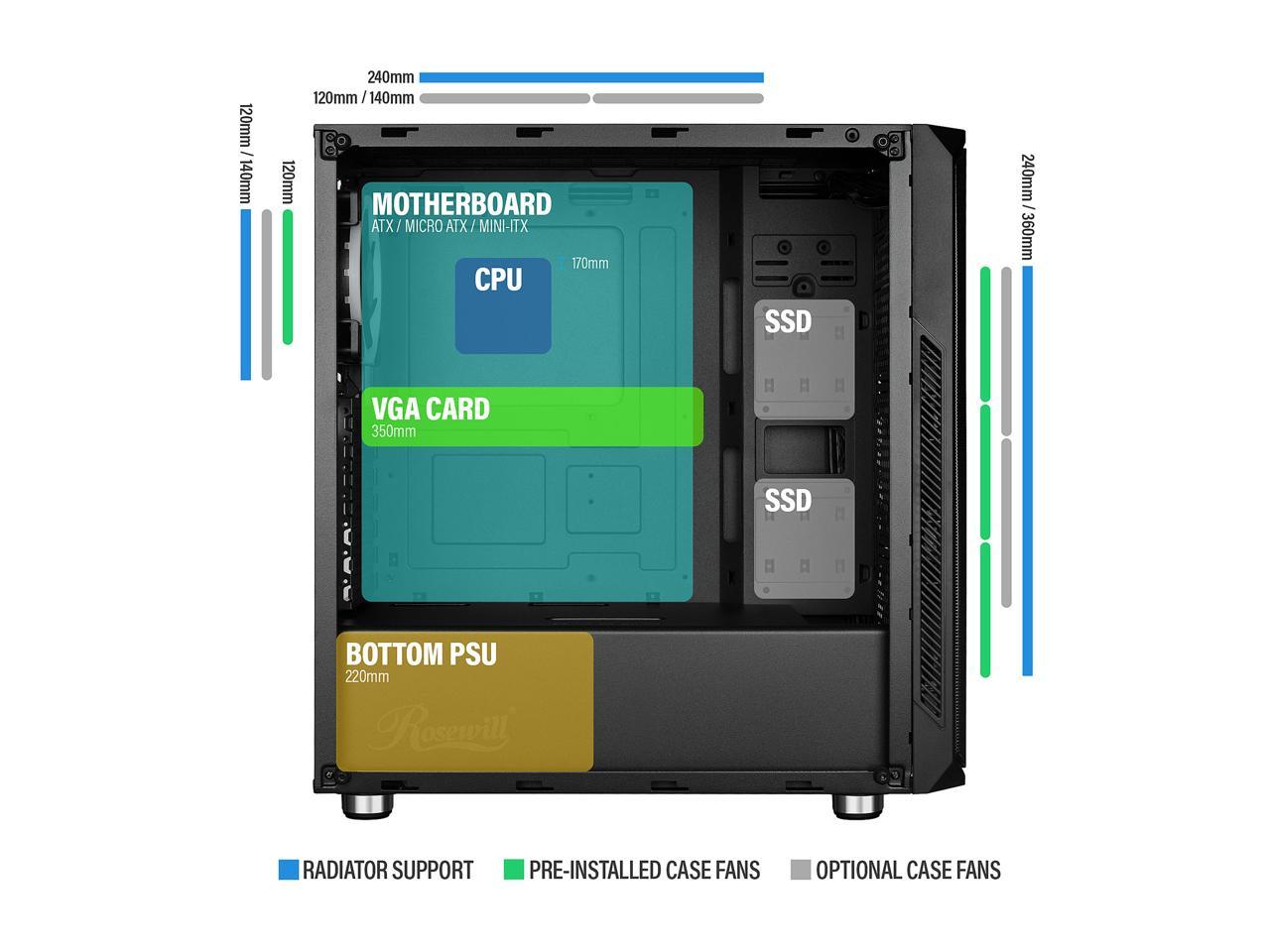 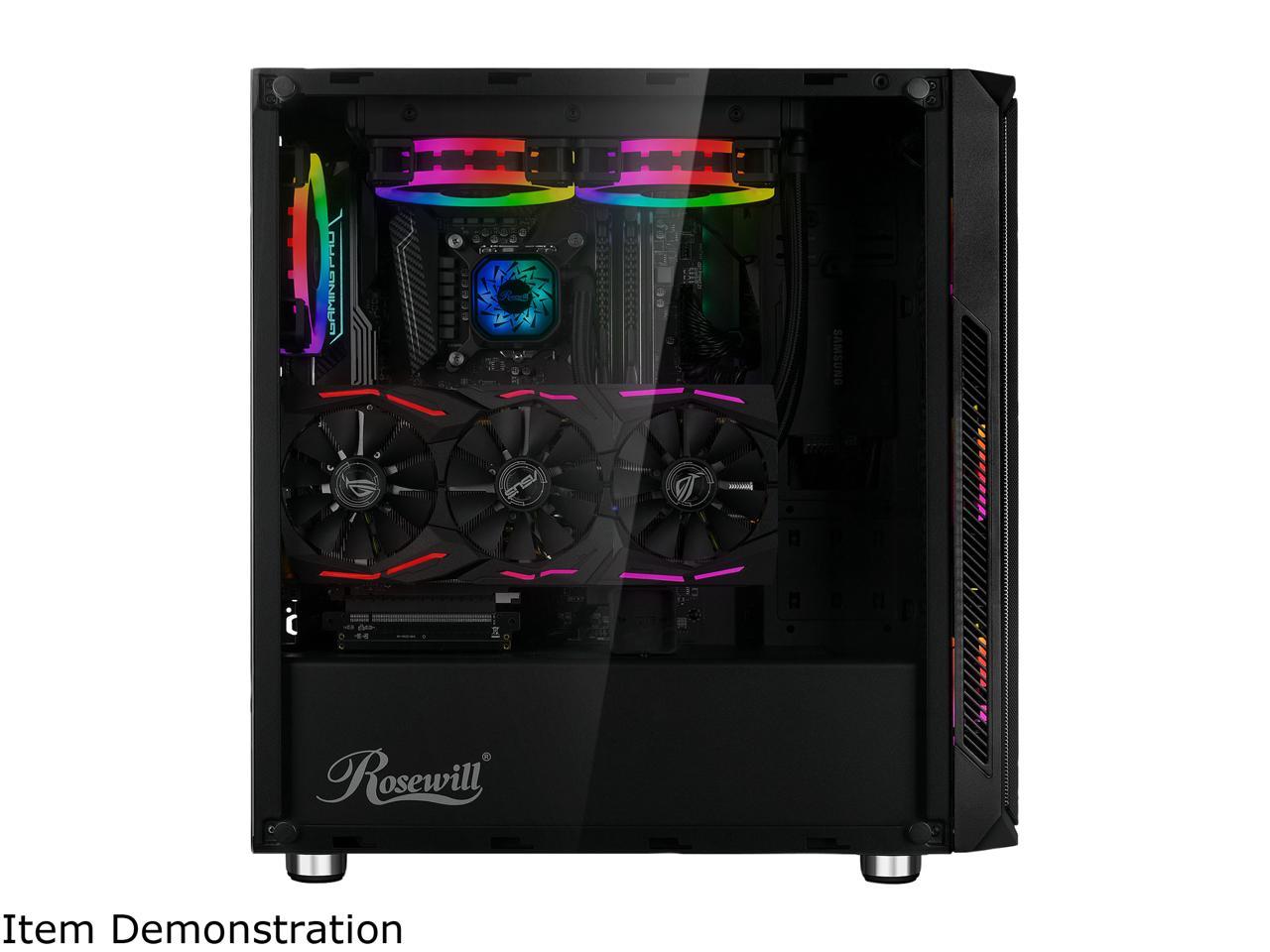 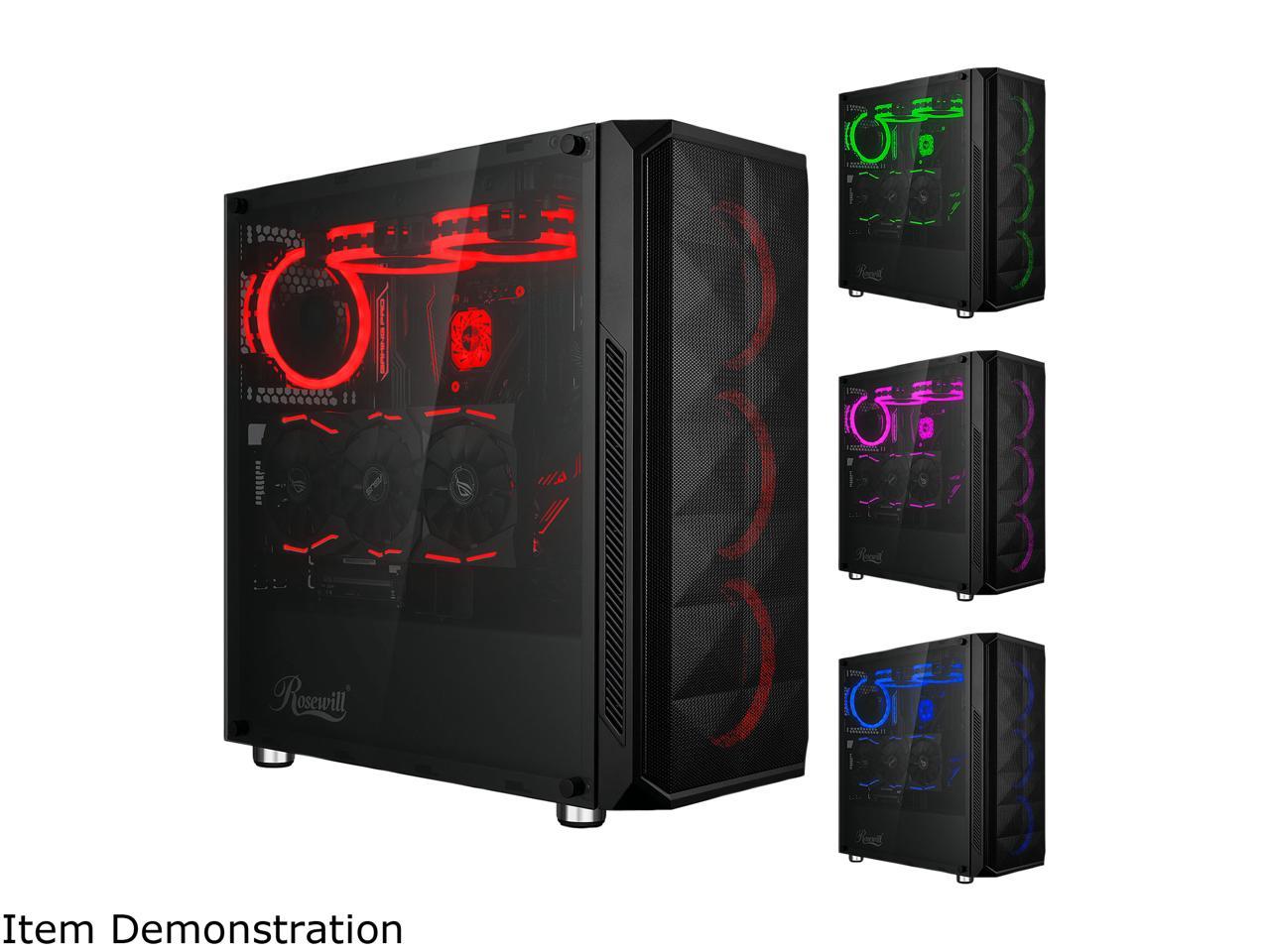 The Rosewill Spectra 100 case's front mesh design increases case ventilation and promotes greater airflow while elevating overall aesthetics for the best of both worlds in terms of function and style.

These cases come equipped with four dual-ring 120mm RGB fans that can cycle through 10 pre-programmed LED modes to match your rig with other hardware at the switch of a top I/O button—no software or remote needed. Install up to two drives on the right mount side of the case. Install either two HDDs or SSDs on the drive cage. The magnetic dust filter on top protectively stays in place to minimize particle buildup and is easy to remove for cleaning. Having a removable dust filter below the PSU mount makes it easy to clean out excess dust from the bottom of the computer case. Cons: The hub for the case fans does not connect to your motherboard so no way to control fan speed. RGB lighting control can only be controlled by front panel button, annoying if you want to sink all the RGB lights together

Overall Review: Case is solid and fans run well, wish everything had more control and could actually hook up with motherboard, would run more efficiently and not so loud under low demand tasks. Love the case but will be looking into fans much sooner then hoped to.

Pros: 4 LED fans included. Very quiet. Lots if ventilation. Full mesh front, top and under power supply garage at bottom all with magnetic filters in addition to traditional fan opening on rear. Plenty of well placed cut outs and space to run cables neatly. While the cut outs don't have rubber style protection on the edges all of the edges are smooth and rolled steel so there are no sharp edges to worry about for your cables. Dark tint on the tempered glass side panel is nice. Held on by 4 thumb screws. Easy on and off. The solid side panel has a slide lock system with 2 thin screws on the rear. One note with the fans. They would light up when the computer powered up and then the lights would go out. The fans were running , no issue. As the computer got warmer inside the case and the fan had to run faster the LED on the fans would light up and stay on. I have Smart Fan with my motherboard BIOS and played with the system fan settings in Advanced. At 50% fan power the LED's were off. At 60% power the LED's came on (dull, but on). At 70% the LED's were brighter, then brighter yet at 80% power. At 90% and 100% the LED's glowed at their brightest level. I settled on 70% power for the system fans that has them run around 1240 rpm. The case is still quiet, plenty of cooling, and the nice glow.

Cons: Maybe included some information about the how the fan LED's operate in the user manual but other than that no issues.

Overall Review: I love this case. Great value for the money

Cons: -although it's my first build I am well versed in the art of careful wire management, but a beginner might struggle a little with placement of wires with s lightly limited space. -literally nothing else!

Overall Review: What a great way to start my first build! The case looks amazing, it was well packaged, and has everything placed in an easy to understand way! It made it all a breeze with plenty of room to upgrade down the road! Well done Rosewill, I will definitely be using you again:)

Pros: Good air flow RGB is controlled by a switch on top

Cons: Case leaves a bit to be desired for cable management

Overall Review: I got this case on a Shell Shocker at 45% off so at that cost point absolutely get it. Full price it is still worth it but you should certainly look at other cases at that price point to see what has what you need All the RGB fans come connected to a splitter that is hooked to a led button on top of the case that you press to cycle through your options Mounting a top AIO isn't quite as doable as I felt they advertised, but the issues I had where also cause by other components I had chosen (RAM and a Motherboard heat sink) I think the cases only real short coming is in the cable management realm, Putting the back panel back on is rough since there isn't a lot of space for the cables and the RBG switch withhout having to pull some of the cable slack out into the from visible area. A low cost fix for this would be simply making the back panel come out half a centimeter, but this isn't a deal breaker and for the cost is a great option.

Cons: - Not a lot of cable management space behind the motherboard tray - Flimsy punch-out style PCI slot covers with restrictive ventilation - No rubber grommets on the cable holes

Overall Review: I build computers often for friends and family, and one of my friends expressed interest in learning to build PCs, so I bought this case for his first PC build because it was on sale at the time and seemed a decent value with the glowy fans included. It seemed simple and straightforward enough that I could teach my friend to build his own computer in it easily enough without worrying about too many frills and fancy complications. I was very pleasantly surprised to find that it was one of the better cases I have ever worked with. Usually when a case includes four fans, I expect them to be mediocre at best, but the four that came with this case are decently good quality and push a fair bit of air without too much noise. (I do not have the equipment for fancy decibel tests, but as a purely subjective observation). The PSU compartment was fairly standard and thankfully the hard drive cage is easy to remove so that some space can be freed up for cable management, which is my only real complaint. The space behind the motherboard tray is very cramped. Luckily it did not end up being too much of an issue since this build was fairly basic, but I can see it being an issue in more complex builds. The only other complaint I have, which is very minor and not at all a deal-breaker, is that the PCI slot covers are the cheap, flimsy punch-out style, which is obviously a cost-saving measure that keeps the price down, but feels cheap and detracts from the overall quality of the case. Overall, this is a fantastic case for the price, even without the sale, and one that I would highly recommend.

Pros: Nice case, well made Similar to meshify C from fractal 4 fans with the case

Cons: Rather old fans, the leds will not fully shine unless fans are at fill power aka molex Fourth fan is only a 3 fan header so have to be in pmw mode for full power

Overall Review: Overall Was better than I expected

Pros: - Spacious - Excellent Air flow - Great build quality - Easy to use - Front USB-C is so nice (all manufacturers sleep on that, but not Rosewill) - I really appreciate the removable hard drive cage by the power supply. Some cases have that completely integrated. - All 140 MM fans is very nice for the airflow. - There are tons of dust filters, and the front panel is easily removable for cleaning. - The fans are pretty quiet (not Noctua levels, but better than the Spectra D100 case fans)

Cons: - The user manual was trash - The cable management door and glass door was only held by a magnet, so your cable management needs to be basically perfect to keep that panel shut, although it does make for really easy access. - the cables to the fans were a little confusing. I've never had case fans that used SATA instead of Molex, nonetheless, it all works. - the 3 right standoffs for a full ATX board didn't come preinstalled, and the holes weren't machined correctly, and the standoffs didn't even fit the holes. I had to manually drill them to be larger to fit.

Overall Review: I really enjoy the specs of this case. It basically has everything I am looking for. It fits the Noctua NH-D15 with the 2nd fan. The actual space for a CPU cooler is 190 mm instead of the advertised 181 mm, which is nice. I use the Gskill ripjaw ram, so it isn't super high profile, which allows for the second fan to fit. The cons mentioned aren't anything that has been a dealbreaker for me, just slight inconveniences. I only wish the side panels had the options for thumb-screws instead of the relatively weak magnets only. If it had that, I would give it 5 stars, and it would be the absolute perfect case.

Pros: My dad was super excited to buy a new case for his computer. I swapped everything over and the look on his face made me smile. He loves this case. The side panels are nice and tinted. The included fans give more than adequate airflow. The case is very easy to work in.

Overall Review: Worth the price.