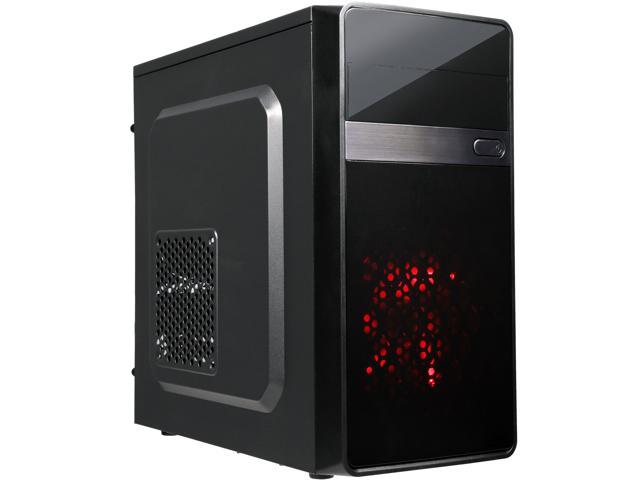 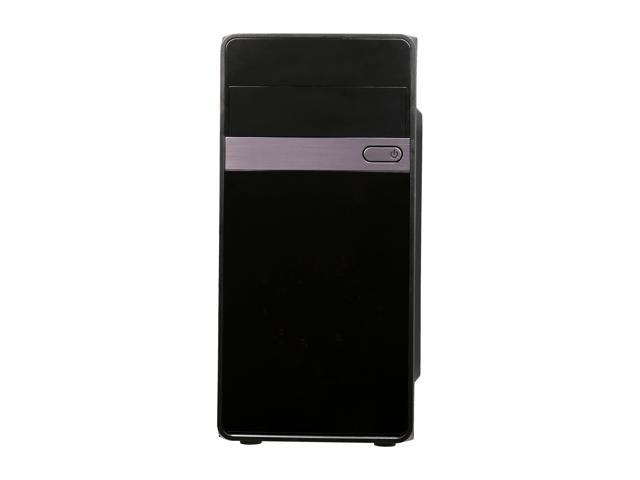 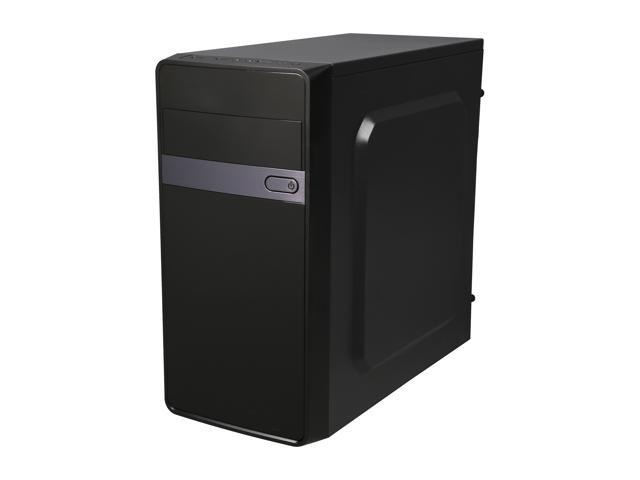 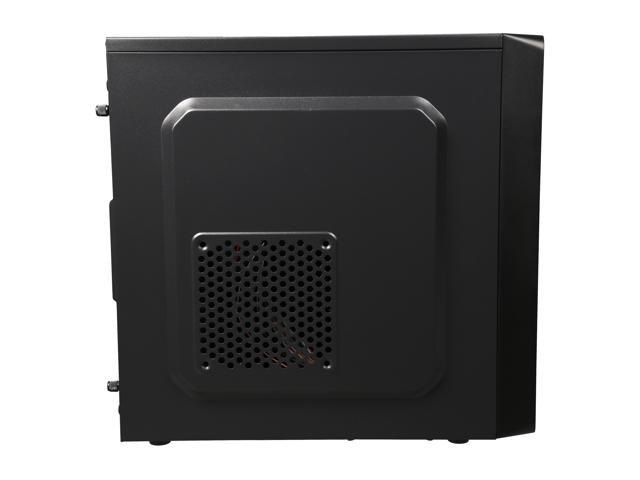 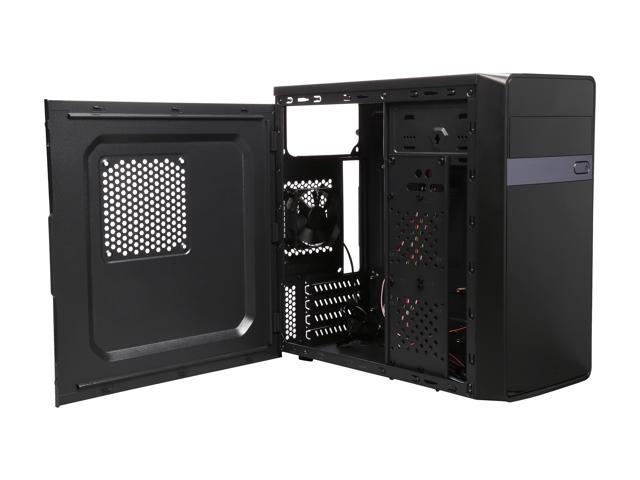 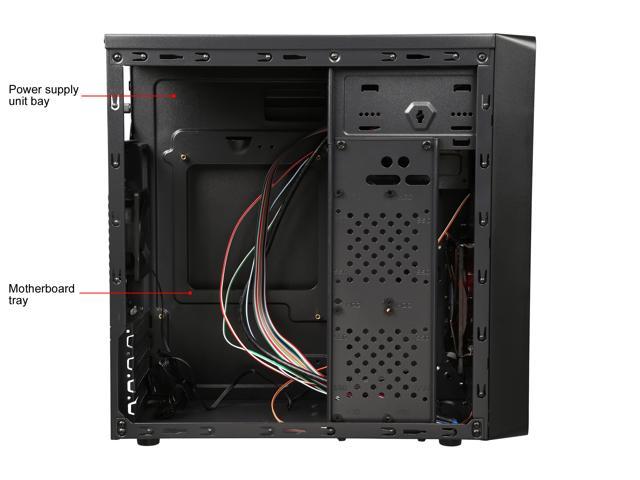 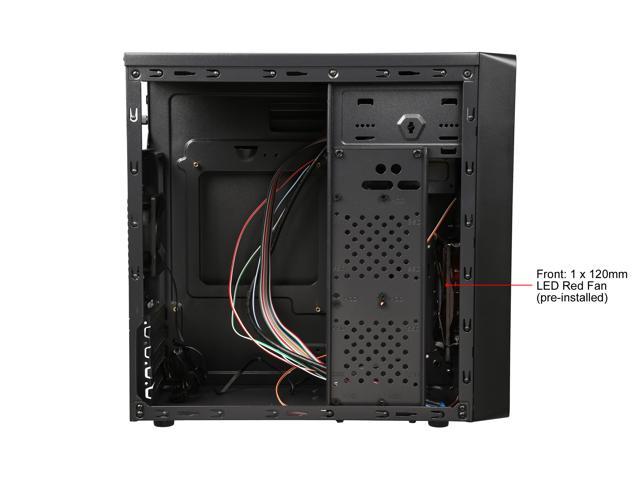 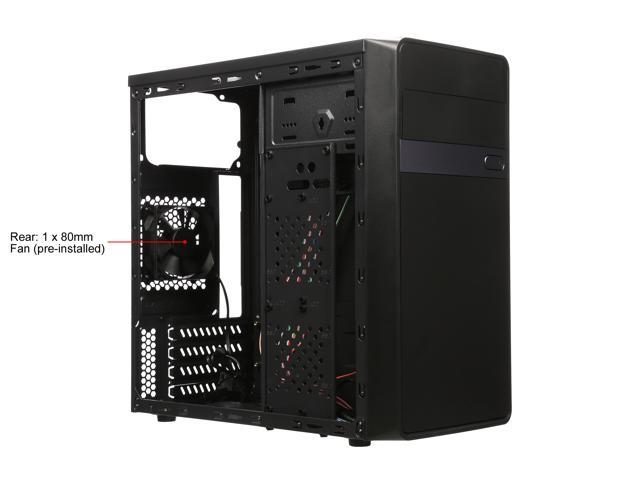 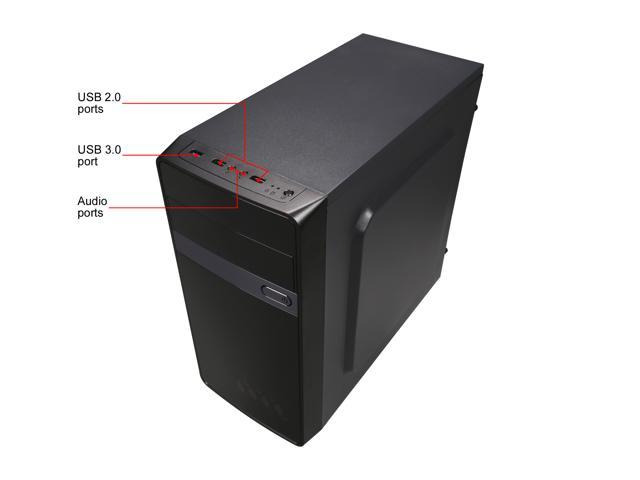 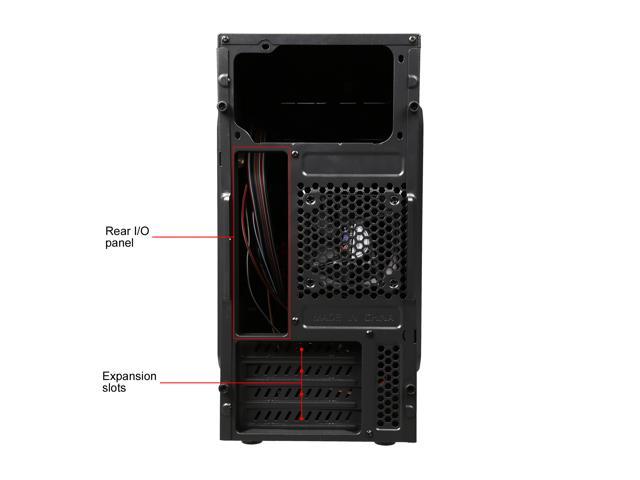 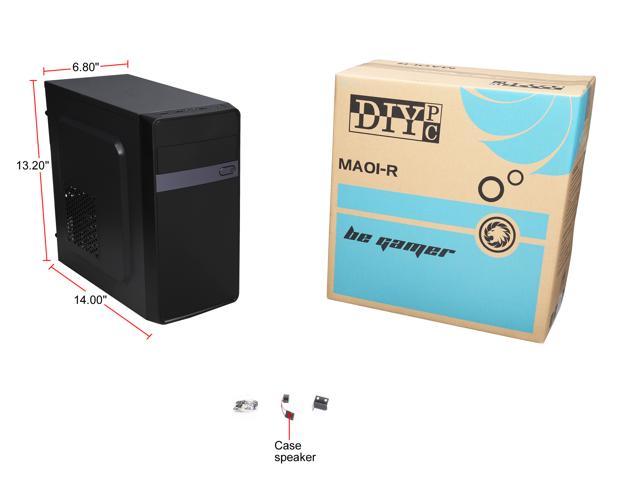 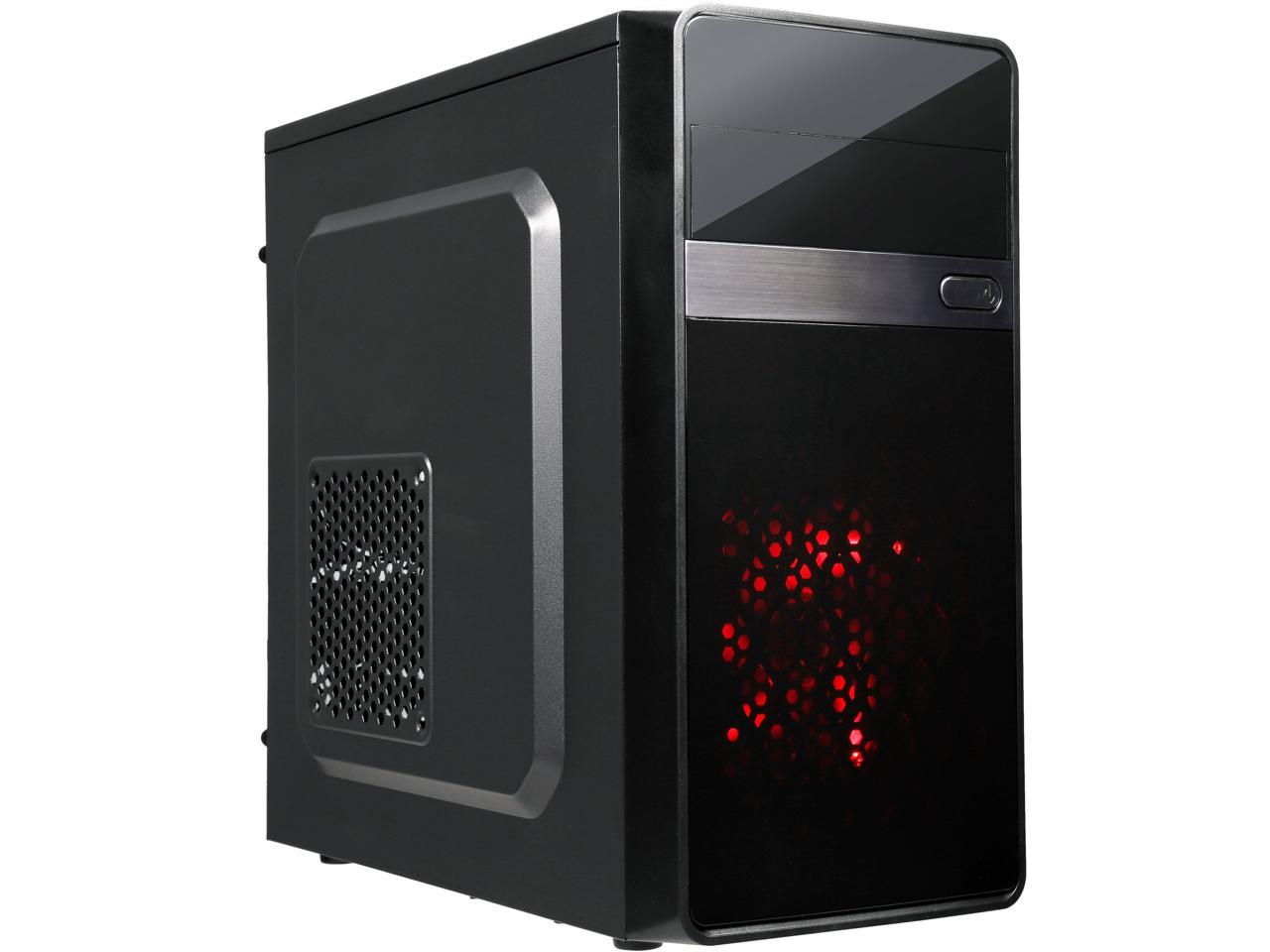 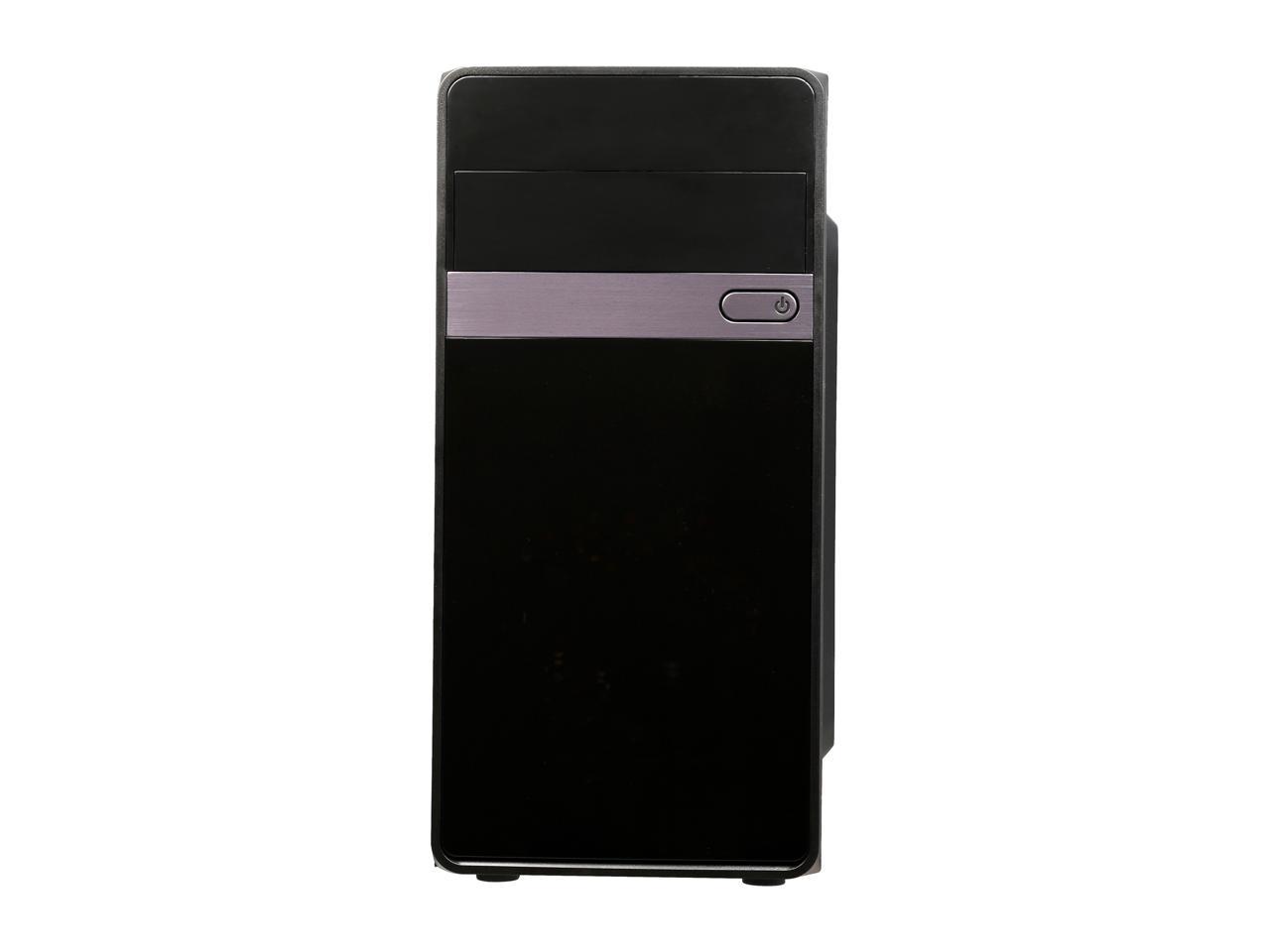 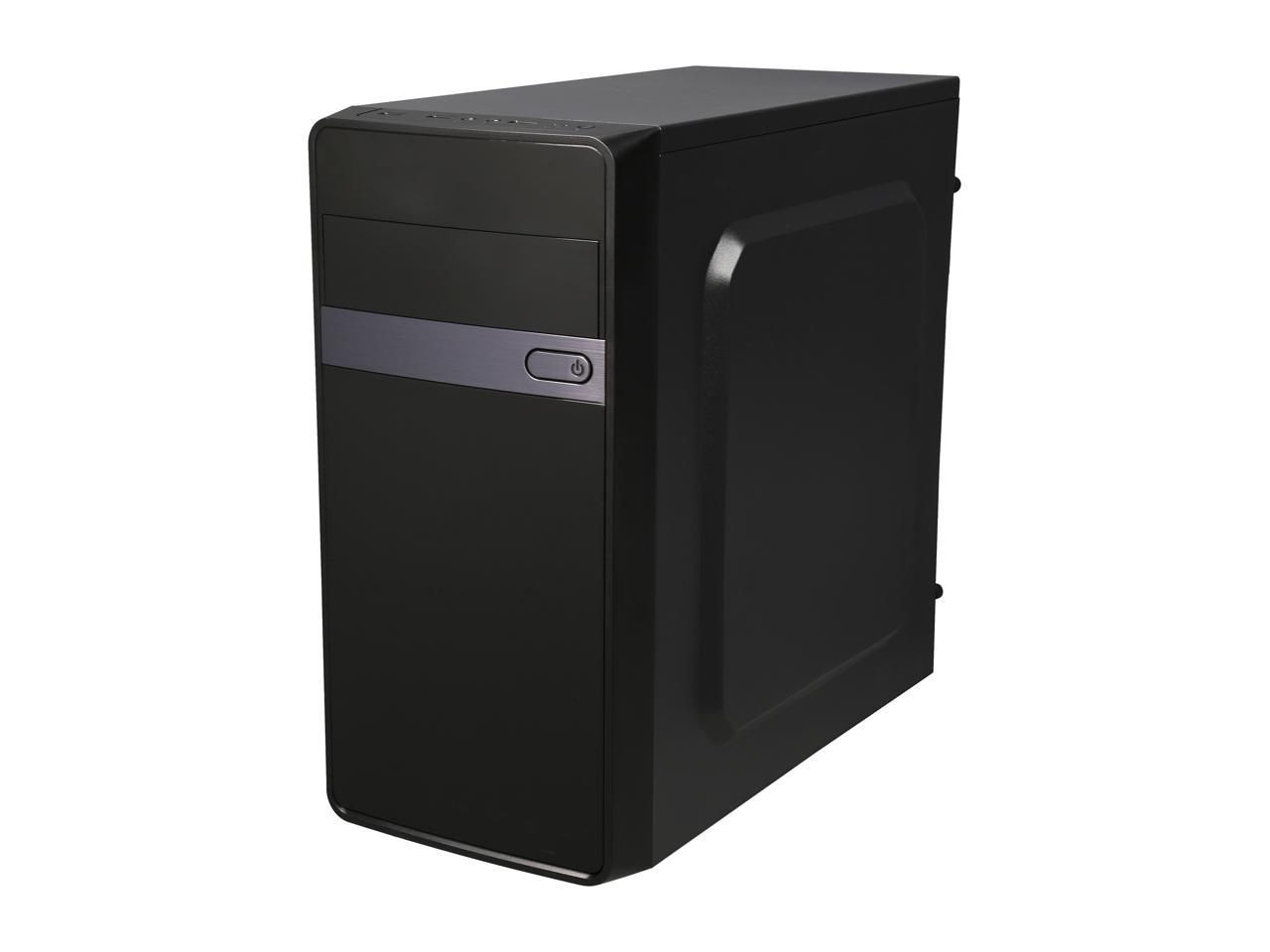 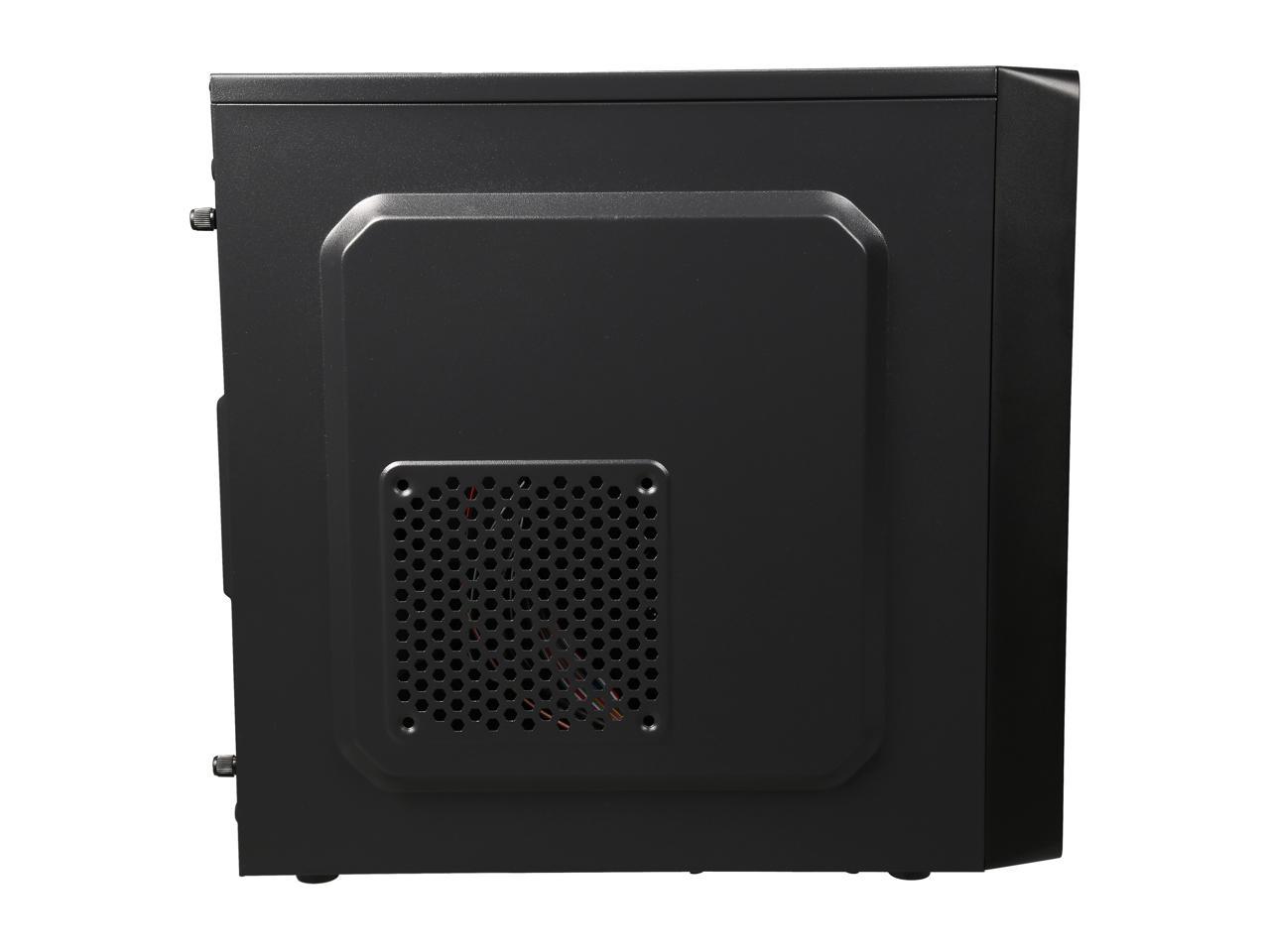 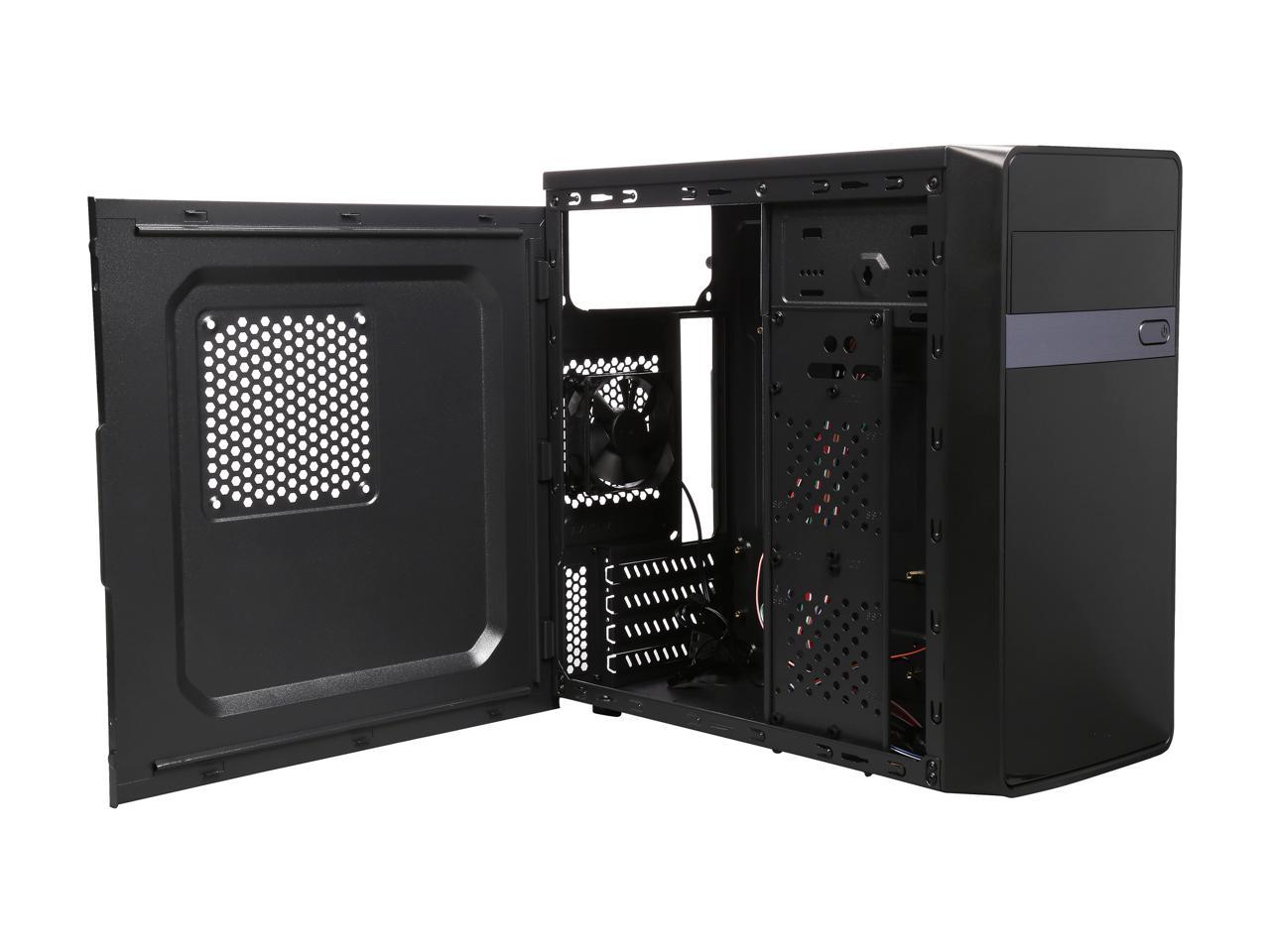 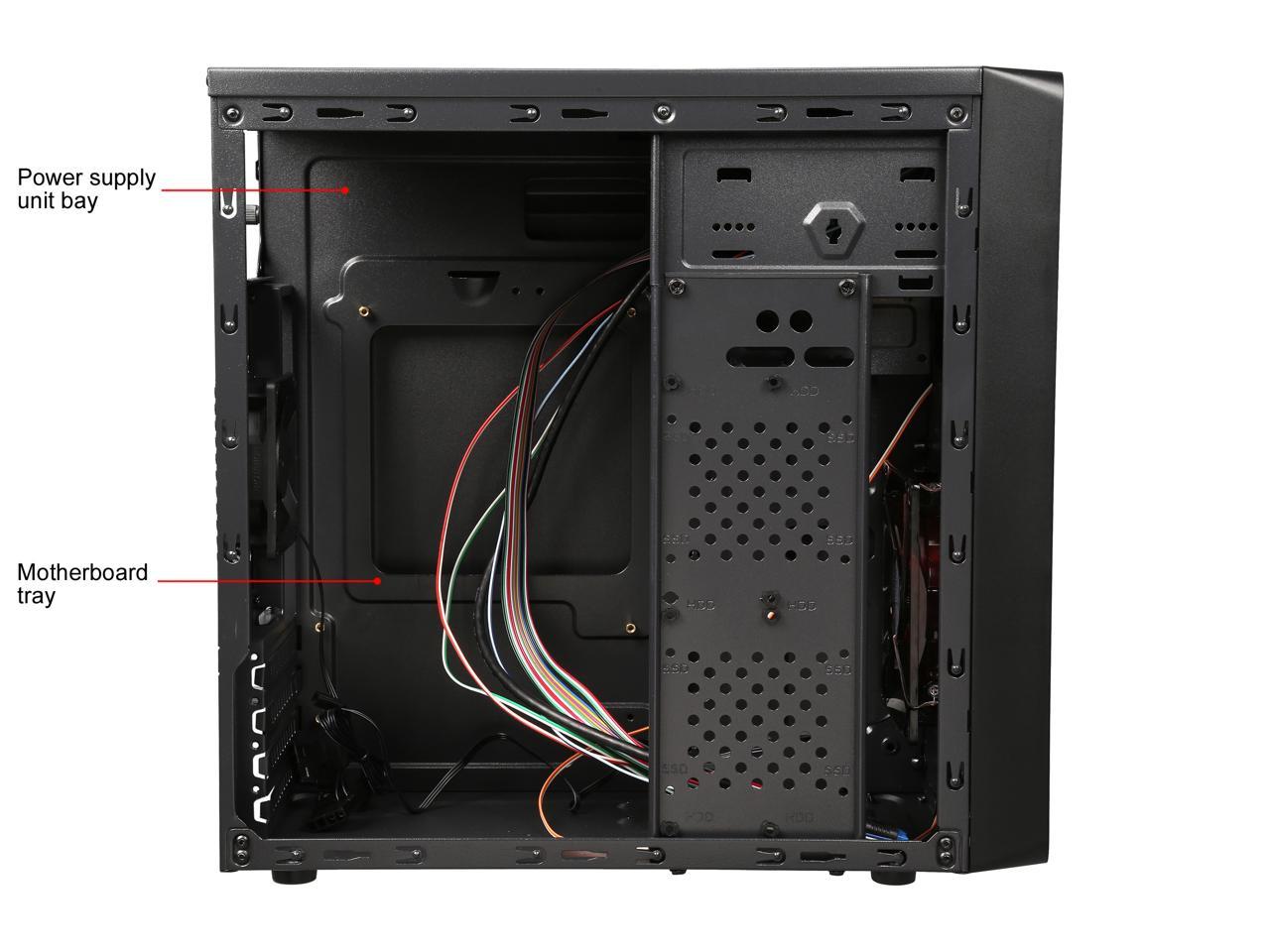 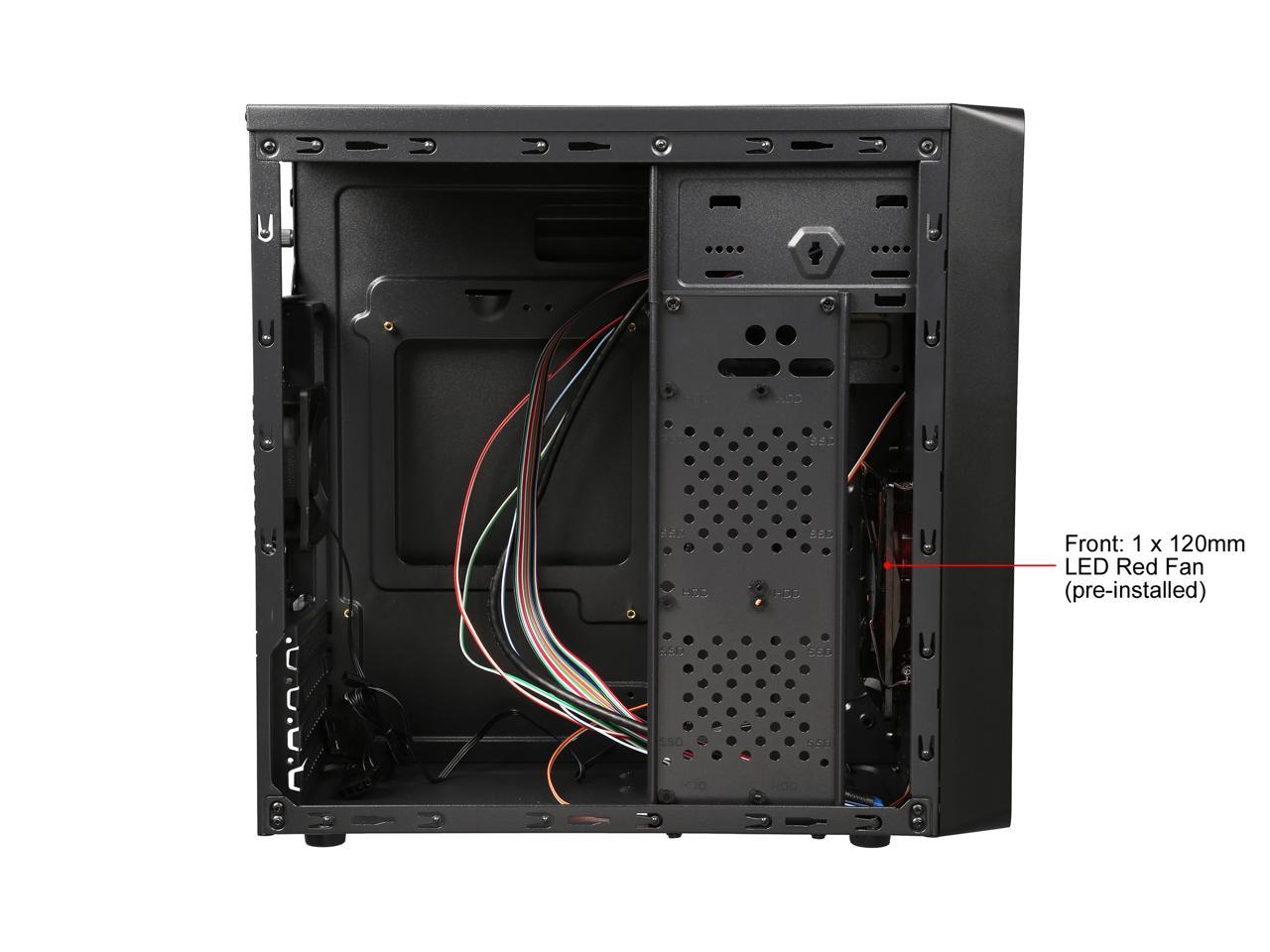 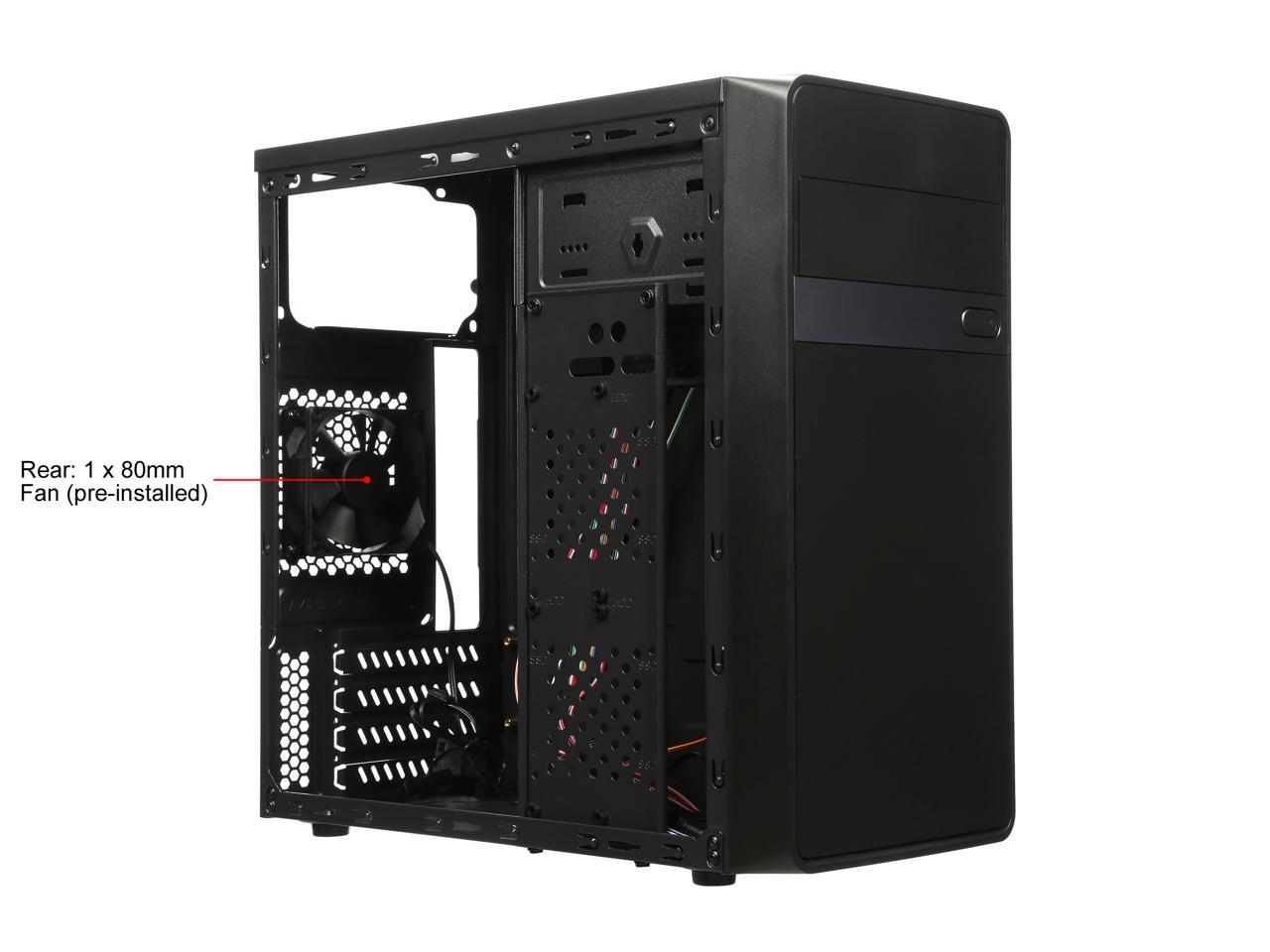 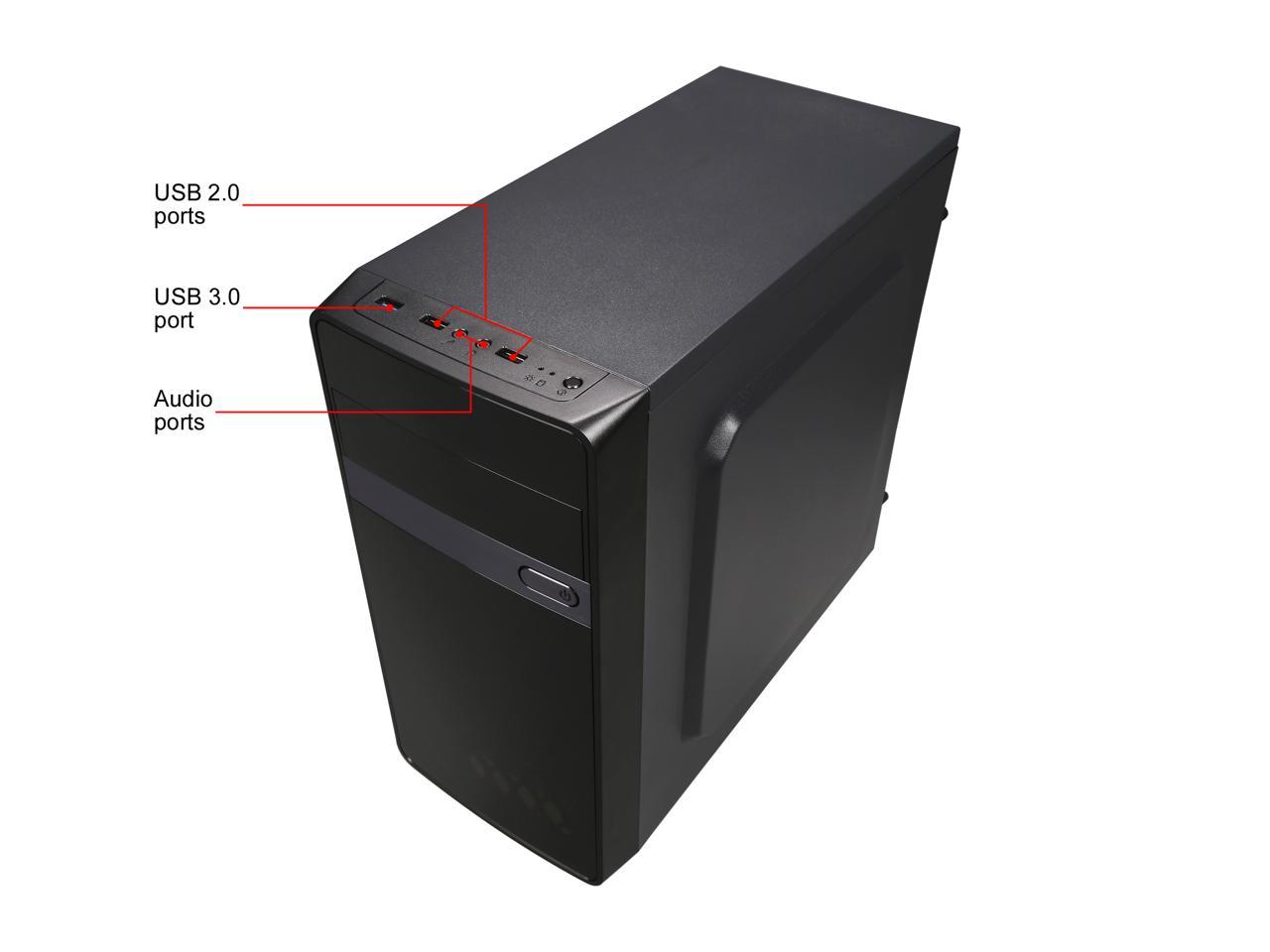 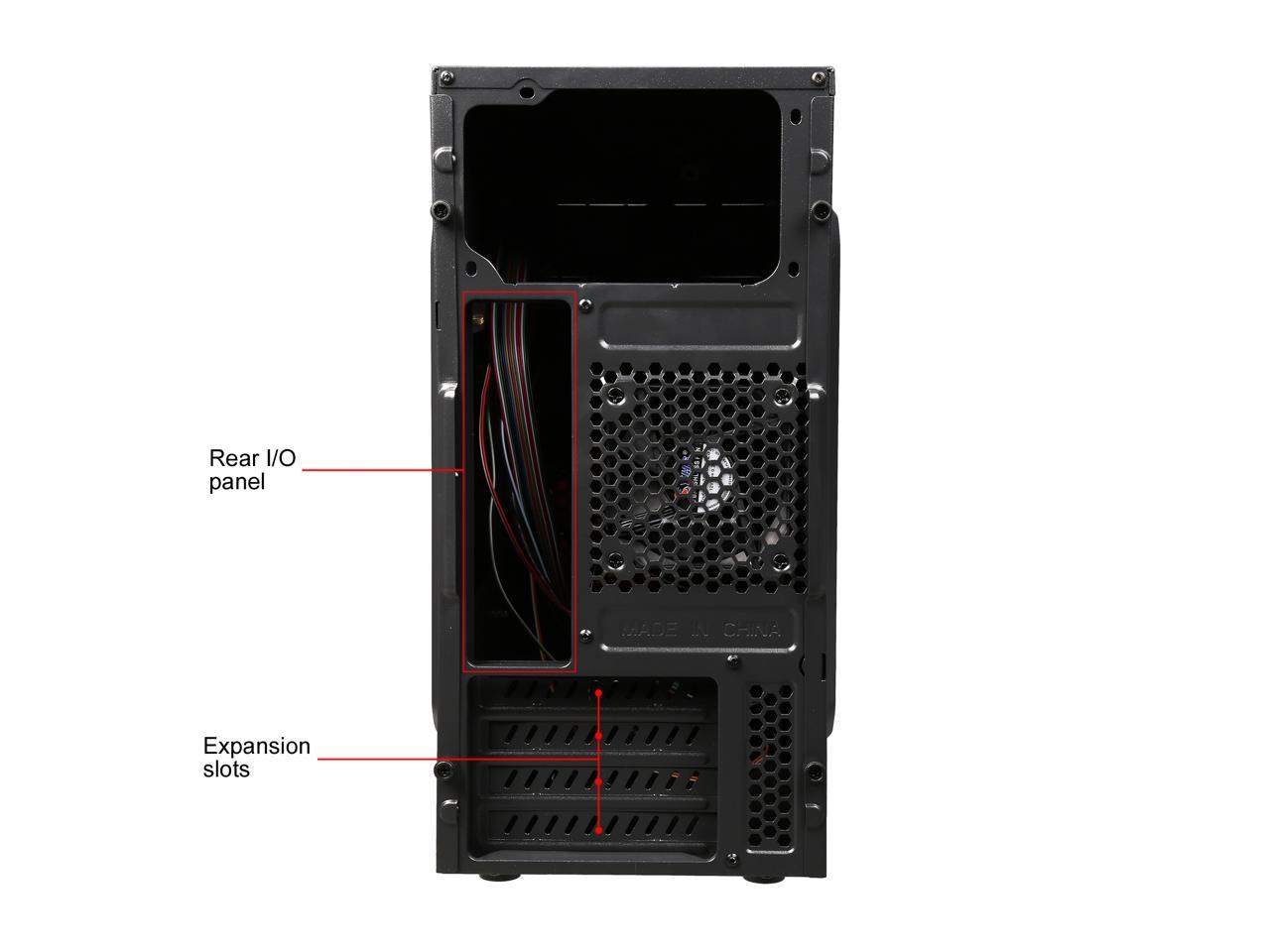 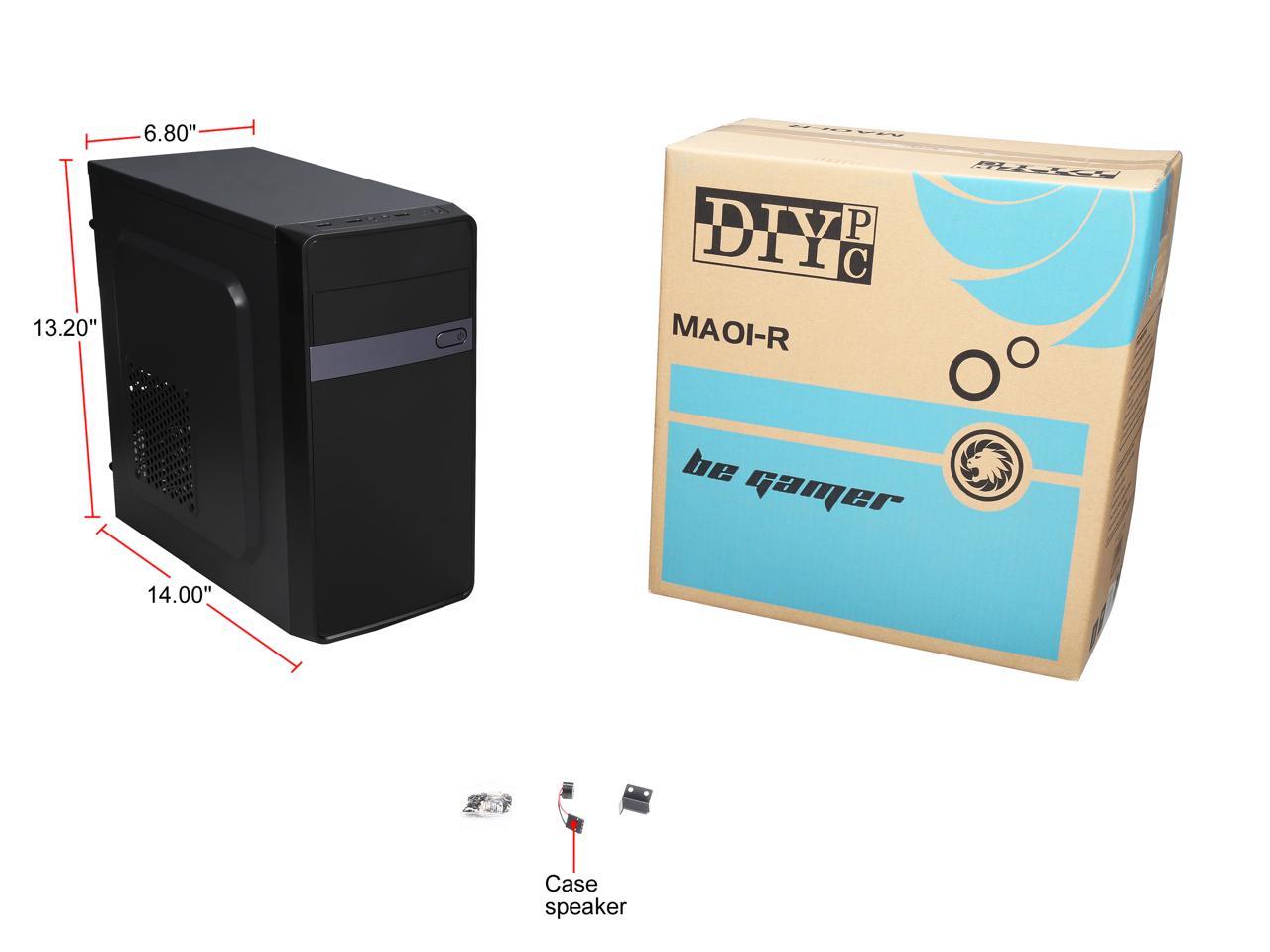 The DIYPC MA01-R Mini Tower Computer Case is a budget-friendly choice for any DIY enthusiast. It comes in a mini form factor but doesn’t make any compromise whether on hardware compatibility, expandability or cooling performance. Plus, it provides easy-to-access top-mounted I/O panel and boasts radiation protection design. Don’t be fooled by its mini tower form factor. The DIYPC MA01-R provides roomy interior space to accommodate your components. In addition to support for Intel and AMD Micro ATX motherboard, it accommodates graphics cards of up to 315mm in length and CPU coolers of up to 147mm in height. It supports standard ATX PS2 power supply (not included).

The DIYPC MA01-R provides multiple drive bays to install your HDDs/SSDs and features a total of four expansion slots, offering the perfect level of expandability you desire. With the ability to support three fans (two fans preinstalled), the DIYPC MA01-R can produce voluminous airflow to keep your system cool. Pros: -Price. This was BY FAR the cheapest case on pcpartpicker at $16 shipped. -The side SSD mounting is removable for better airflow, or to be honest any airflow at all. -There is a very useful cubby right in front of the PSU to store your currently unused power cables. -TWO fans, an intake and an exhaust. -Behind the motherboard cable routing, with a side panel bulge to actually accommodate them.

Cons: -Unbelievably tiny. And so light I can't plug in USB cables without bracing the front. -The amount of planning required to route cables is immense. The PSU cables have to be routed before the PSU is installed (I did not do this at first, and was barely able to unmount it, route the ATX and PCIE cables, and wedge it back in because the MOBO was installed); The front panel cables have to go through the EXACT correct routing hole or they won't reach; The USB cable had to be routed behind the CPU, under the rear fan, and squished flat under the GPU. -Did you think this case came with 5.25 bays? Haha, not if you have a non modular PSU. There is nowhere for the spare cables to go other than this bay, because... see below. -I said it had room for cable routing and a side panel bulge, but like... not a LOT of either, I still needed a helper to get the side panel back on, even with only the main and PCIE power cable being routed. There is not enough room to try and route all the drive power cables as a way to store them. -The friend I was building this computer for asked me to "throw in" his old media HDD when I delivered the PC. Ok... sure. I just have to move the RAM from the recommended 1&2 slots to the 3&4 slots to make room for the cable, Pop the front off the case, and insert the HDD from the front. Only 2 screws though, I was not taking off the side panel, I might not get it back on again. -On my model the power switch was non functional. Minus one egg for that. It wasn't soldered properly and only worked if I squeezed the wire to the switch connection. As this was meant to live behind a monitor, I just wired up the reset switch to power (again removing the GPU) and called it a day.

Overall Review: Even with all the cons I listed, its price excuses a LOT of flaws. I honestly like this layout better than the other options in the extreme budget range, and would probably buy this style if I needed a case this cheap again. Honestly if you do the prior planning, or if you have built in this case before and know the pitfalls, and you want to build a very simple computer with a single M.2 SSD and no other drives, this case isn't that bad. If you have a hard budget and you need somewhere to cut $20, this might fit the bill.

Pros: I love the small size, it is perfect for a business machine that doesn't need huge graphics or lots of overclocking. A build has 4 fans after the CPU and PSU, and cools perfectly. I have built about 10 systems with this case, it's cheap, so the quality is what you pay for, but it's better than the other cheap cases I've used.

Cons: Feet can break off easy, front can be scratched easily, so be careful and leave the plastic on until your done building and ready to deploy. Not much room for high end graphics cards, but you can make it work.

Overall Review: Best value for the price. Has the highest quality, and more fans for the price. Also looks really cool with the GREEN fan. They have a red fan model too.

Cons: -Wish it had a little more space between the motherboard and SSD/HDD mounts.

Overall Review: People need to realize that this is a mATX and one of the smaller ones at that. If you want to cram a 5 1/4 " drive, SSD and HDD this id not the size of case you want. This case is perfect for a minimalist budget build with one storage solution (interior). I have a MSI GTX 950 Gaming 2g and a SSD in this case, and is pretty much what it can handle, I used all the space in the 5 1/4" bay to cram all the leftover cables from the PSU. Also I have a Artic Cooler A11 for a CPU cooler and 2 intake 120mm fans (front and sidepanel) and there is no clearance issues whatsoever. Also if you where expecting fan filters on a $20 case you are delusional, go and buy $0.50 pantyhose and cover your fans. All in all this is a good case if you know what you are building.

Pros: I just received this case and It has already exceeded my expectations. A simple case with just enough for a budget build.

Cons: I've purchased a case from this manufacturer before and it felt cheap and flimsy and at first glance this one man seem so too but they have came along way. For $20 you can't complain.

Overall Review: I bought this for a build that i made for my brother to finally ascend.

Pros: Came with two fans which is awesome, It has a beveled panel to help with cable management which is cool, very solid light case. Cool sleek look. Awesome dual connector fans.

Cons: I have no problems.

Pros: Nice small case. Looks good. Lighted front fan and rear fan run quite quietly. 2.5" drive mounting spots on the case. Plenty of hardware, even extra motherboard standoffs (six pre-installed but movable, two additional. All of the screws and hardware with the exception of the standoffs are black in keeping with the aesthetic of the case.

Cons: The 2 2.5" drive mounting spots are so close together that you can't use both of them. Well, you could, but there'd be no room for the SATA cables. No manual. Not even a single quick reference sheet. I guess these guys take the "Do-It-Yourself" of DIYPC very seriously.

Overall Review: I bought this to replace a standard mid-size ATX tower for my media center. I almost removed this from the cases I was considering because it didn't look like it had an external 3.5" bay. But Newegg's specifications read: External 3.5" Drive Bays: 1 This case does NOT have an external 3.5" drive bay. There is one 3.5" bay, and while the metal chassis leaves the front of the bay open, the plastic front panel does not accommodate this (in fact, the power switch directly obstructs it.) Fortunately for me, what I wanted to put in the 3.5" bay (USB ports for my wireless keyboard/mouse) work fine without being exposed, and that leaves the front of the case smooth and looking good.

Cons: I ordered three together for some custom cheap builds and all three were missing the HDD Caddy. Unless you're using SSD only this case is useless.