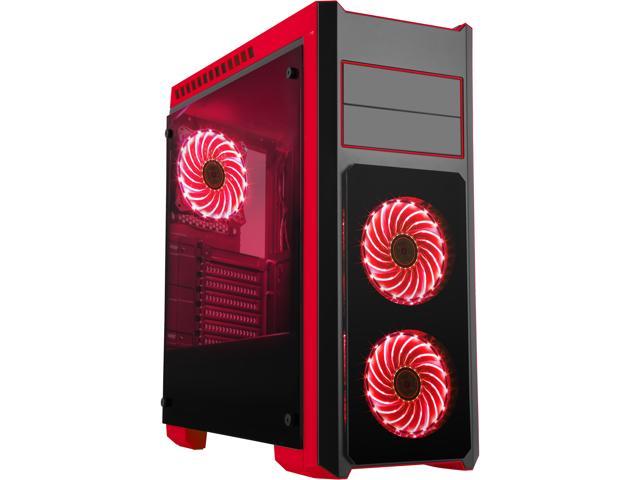 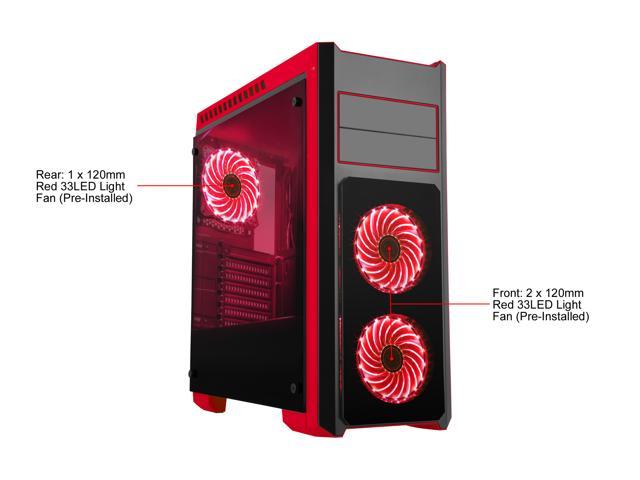 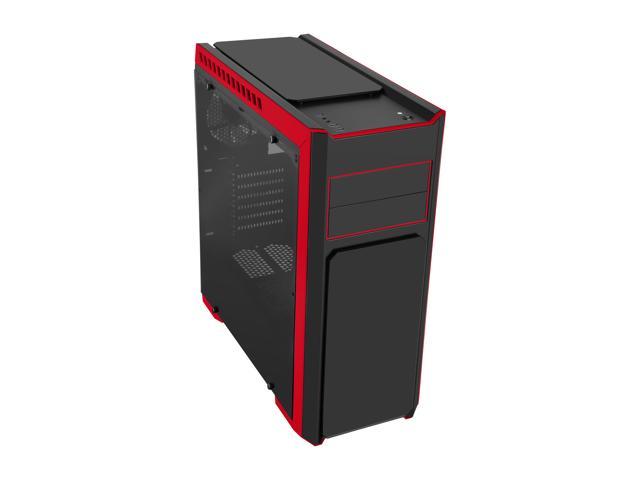 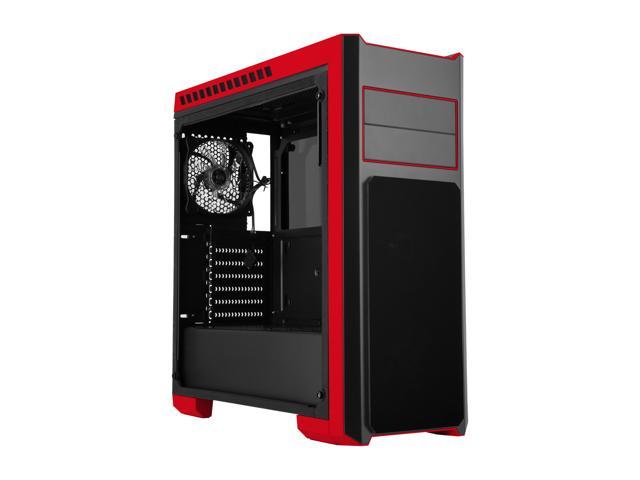 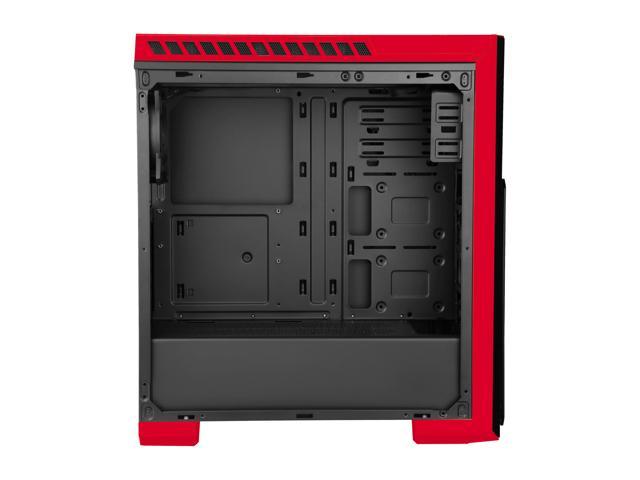 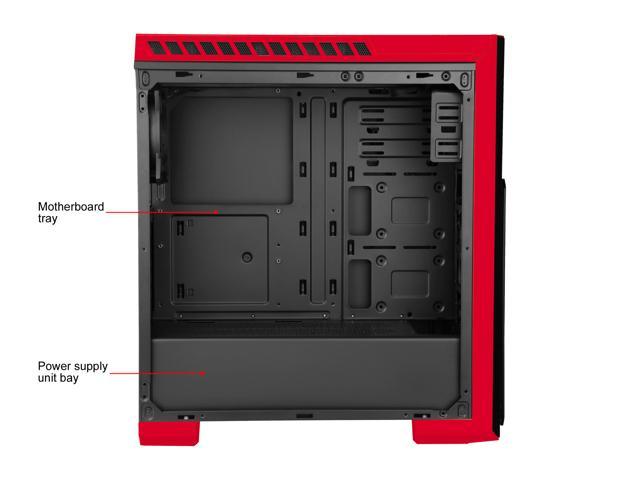 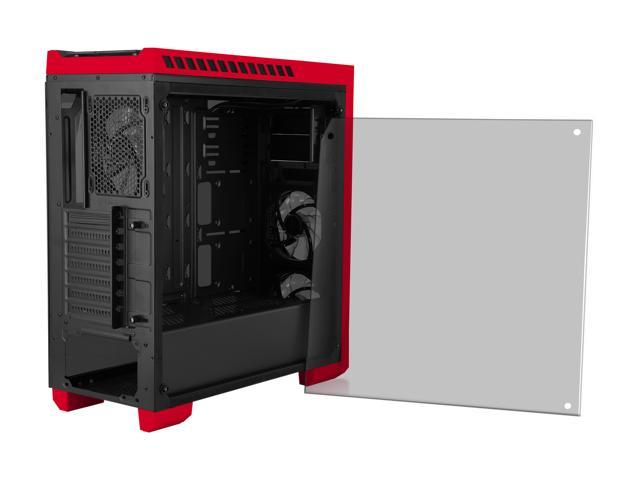 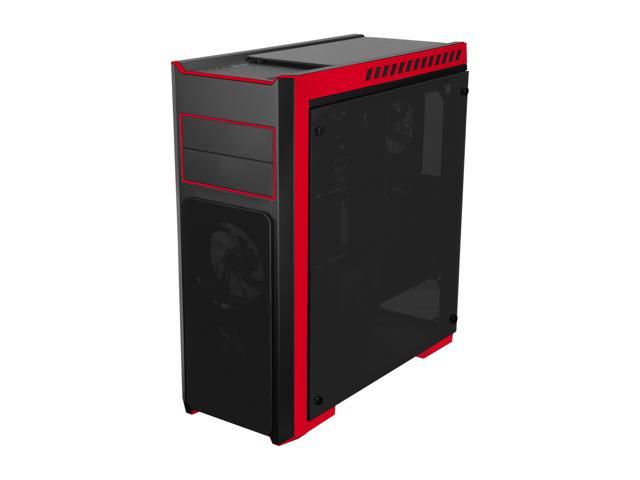 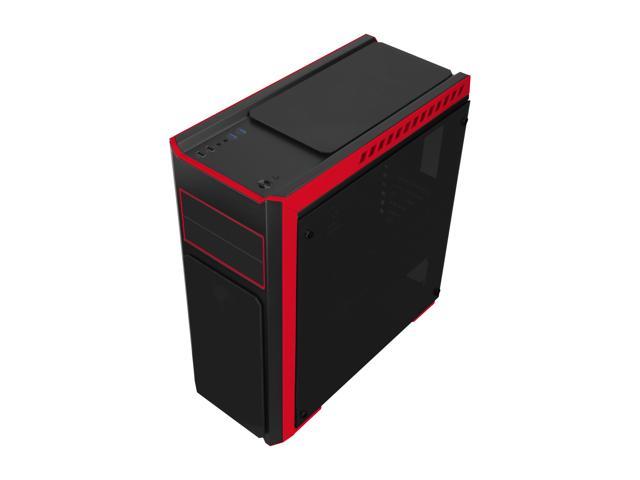 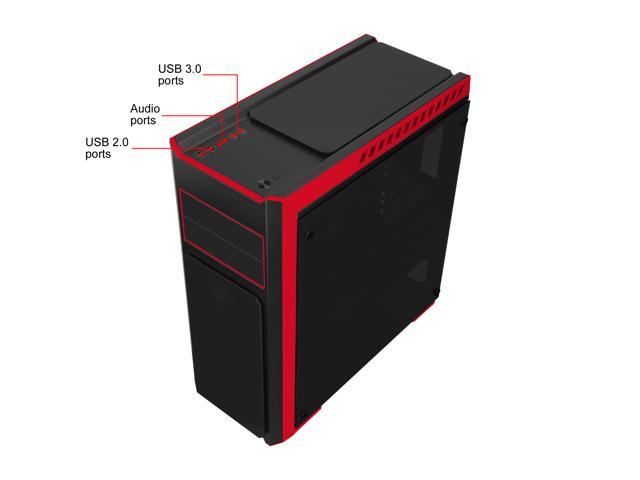 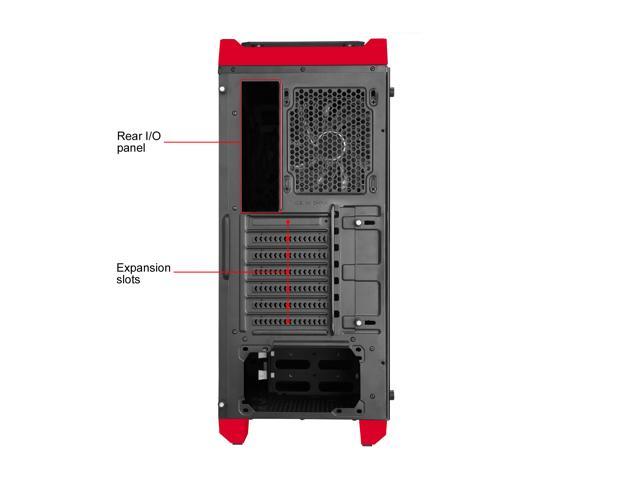 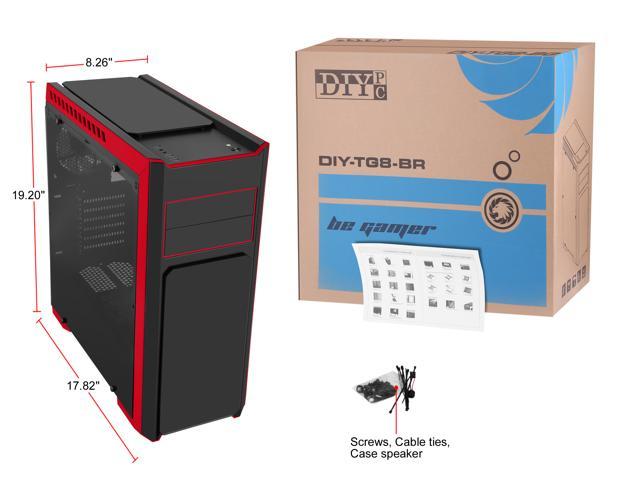 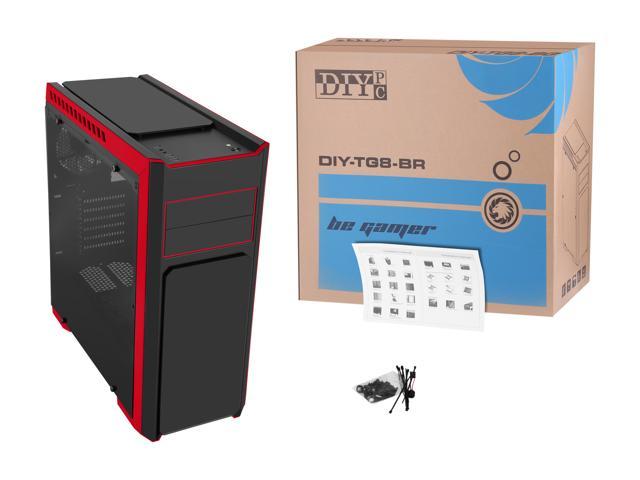 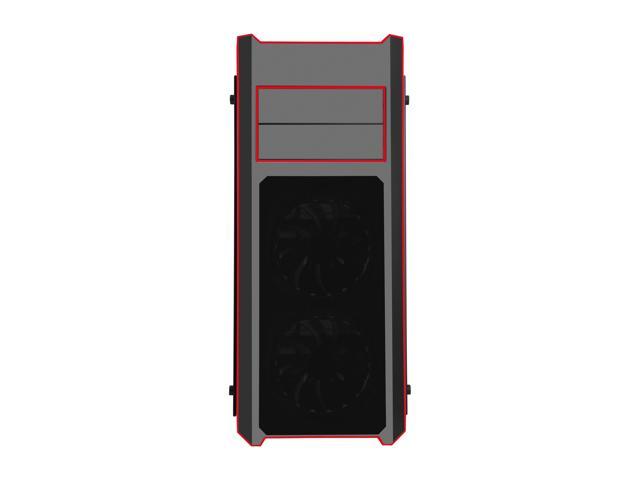 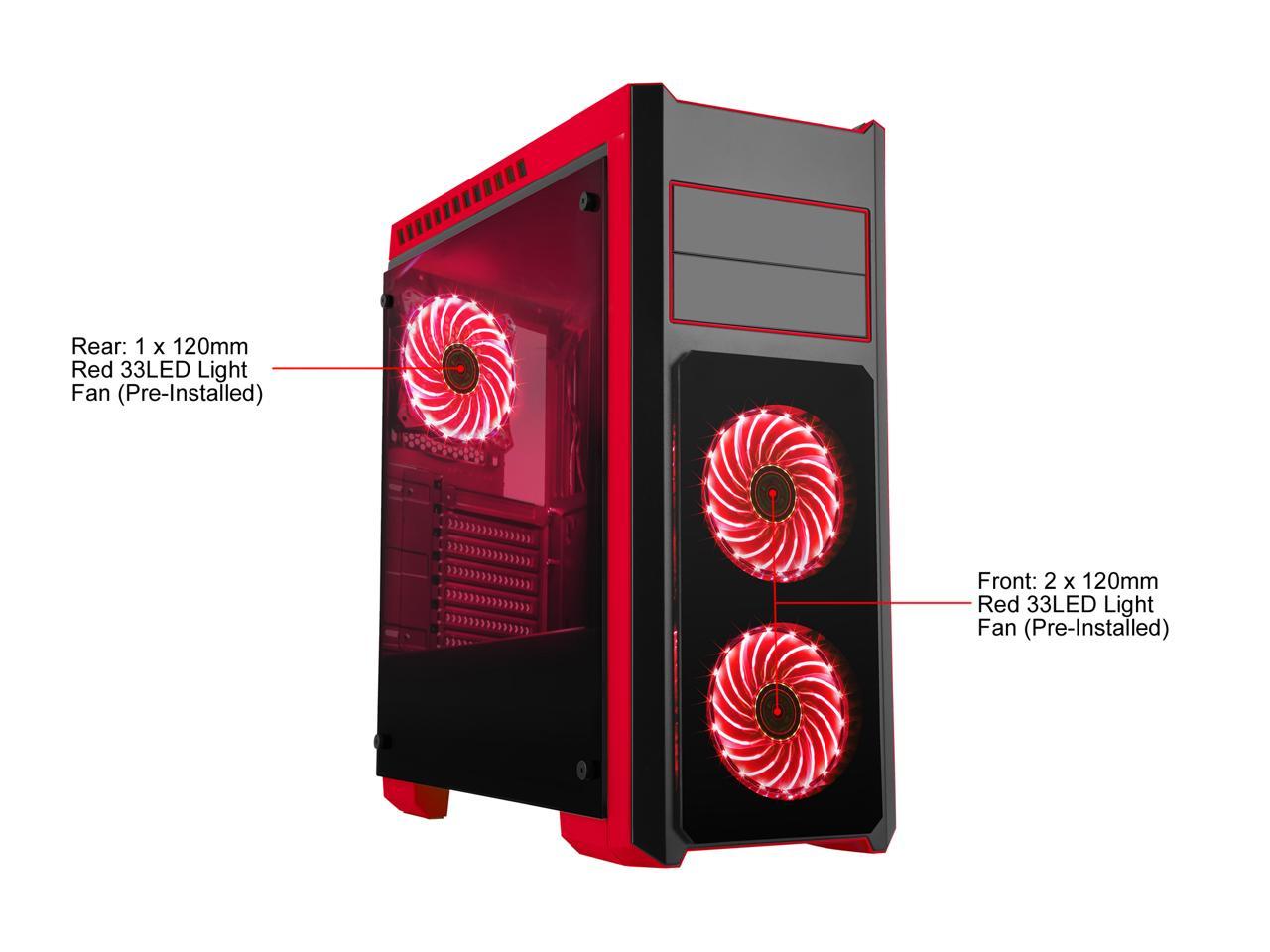 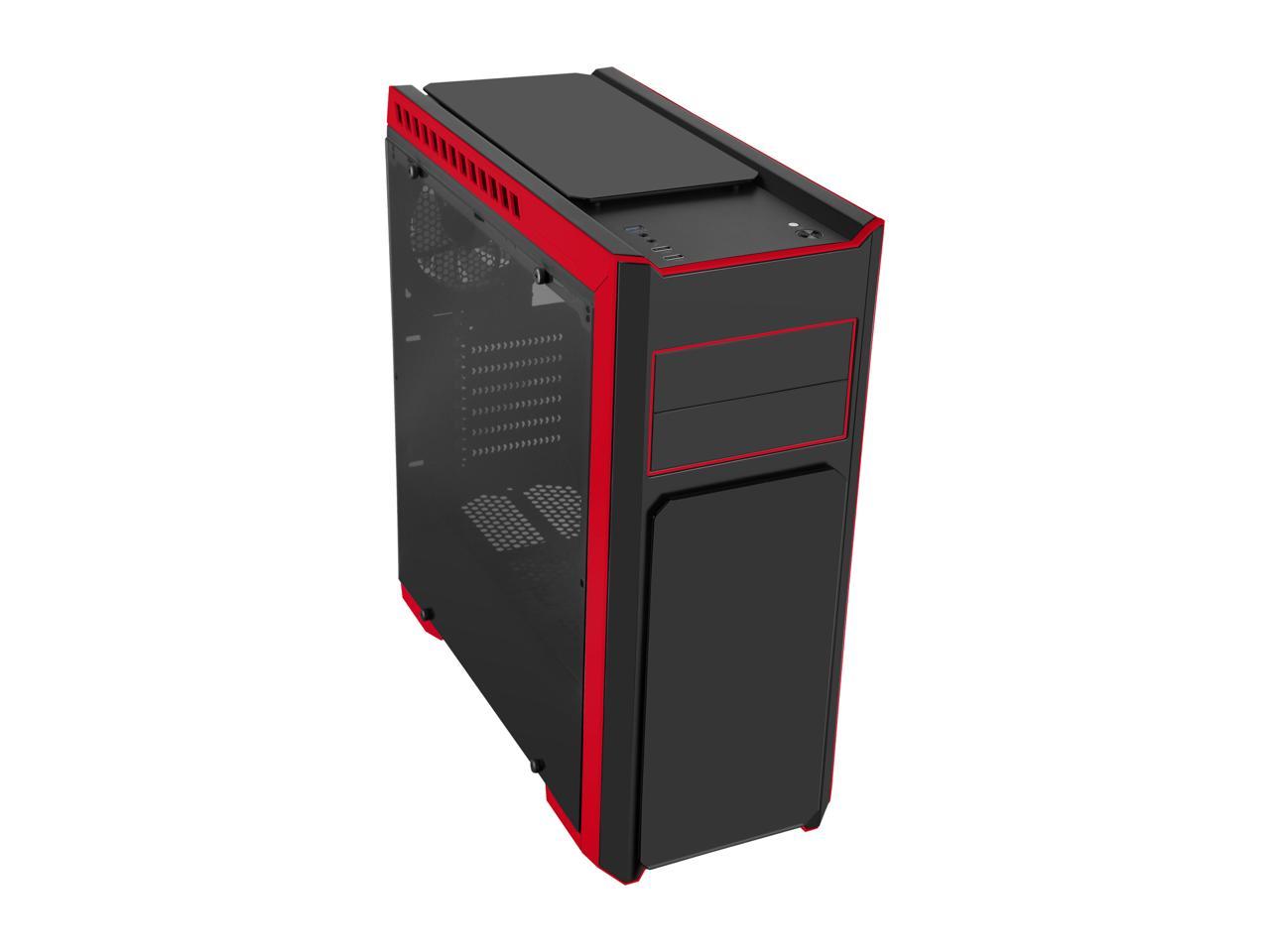 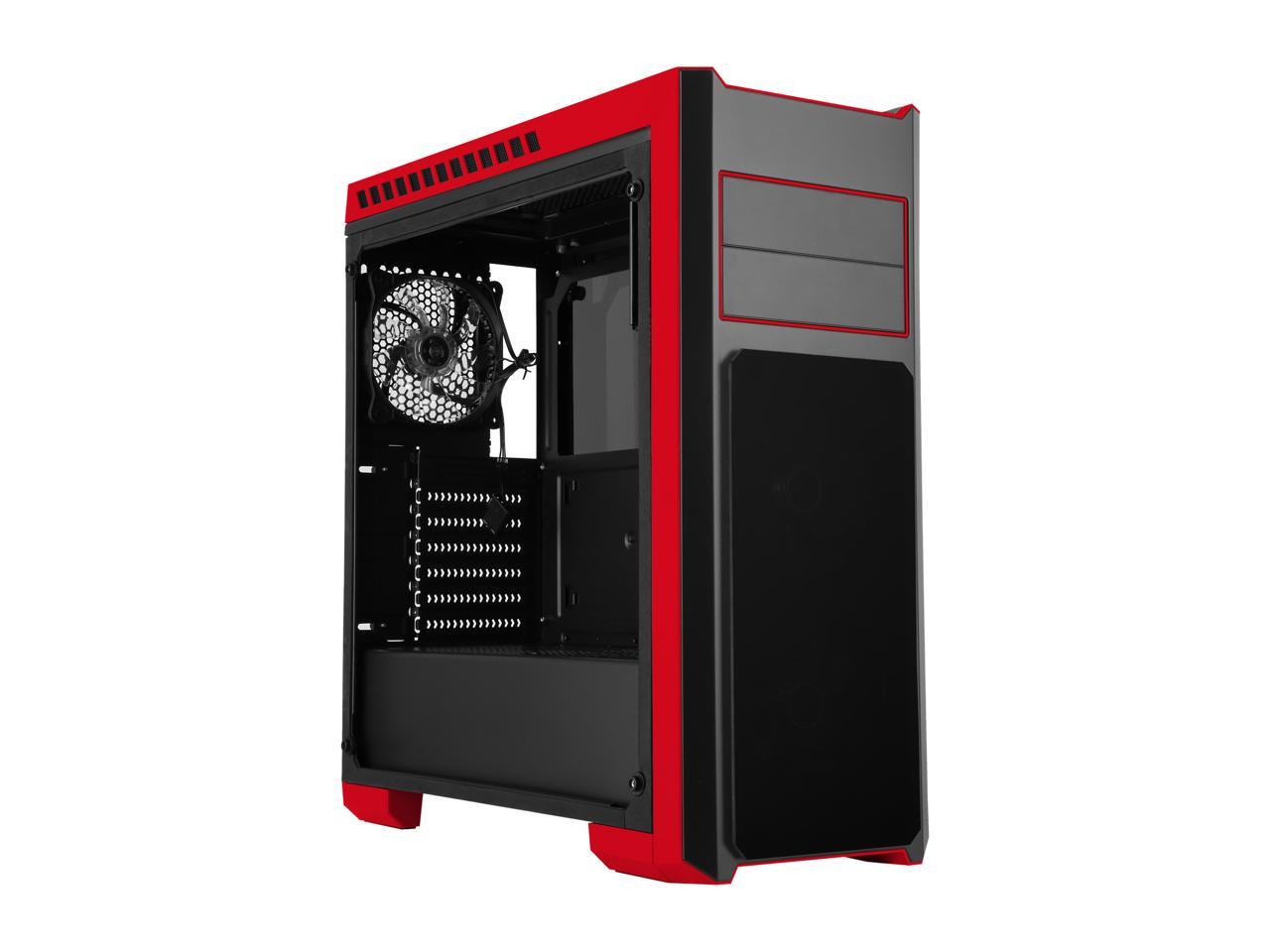 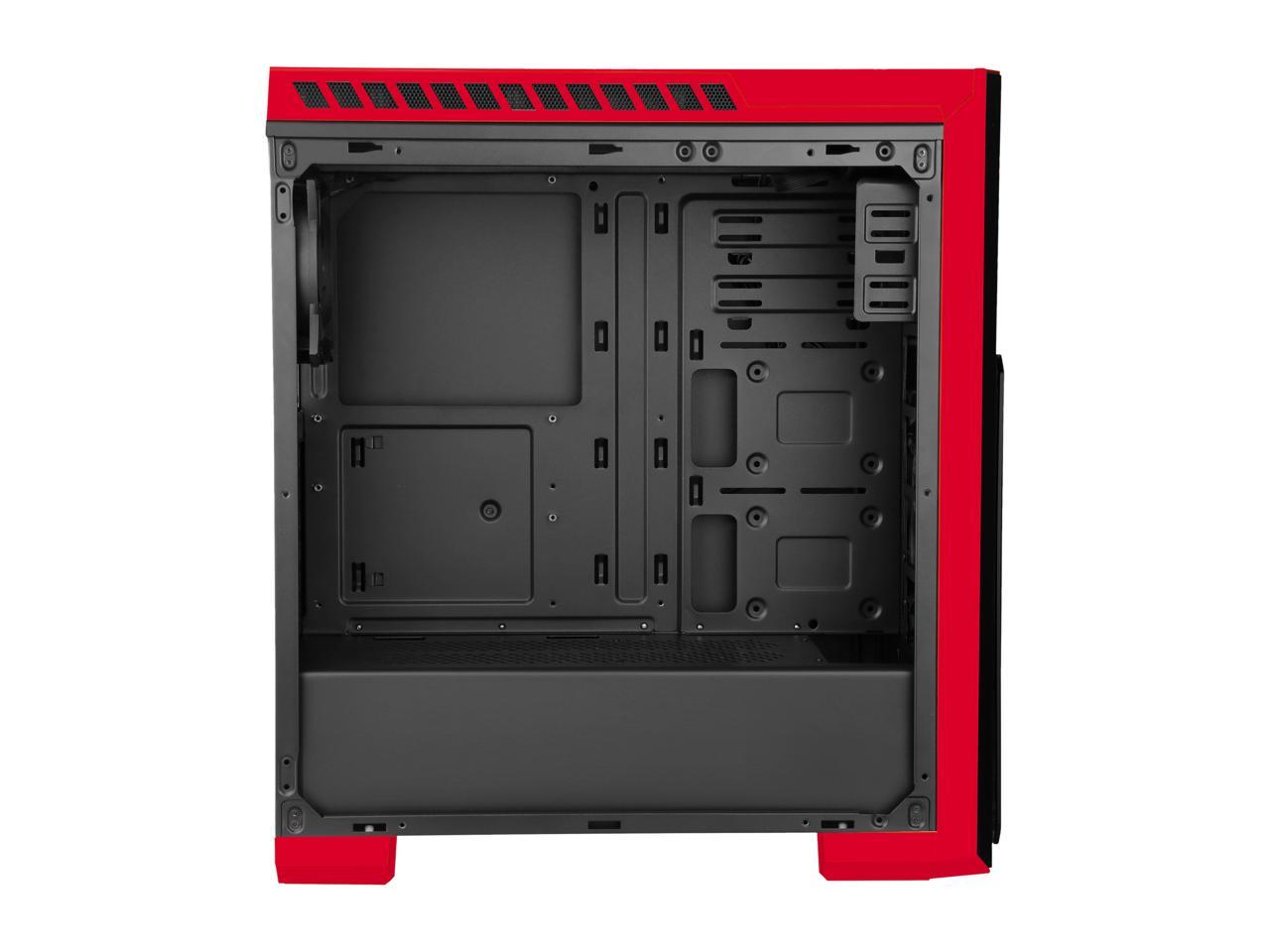 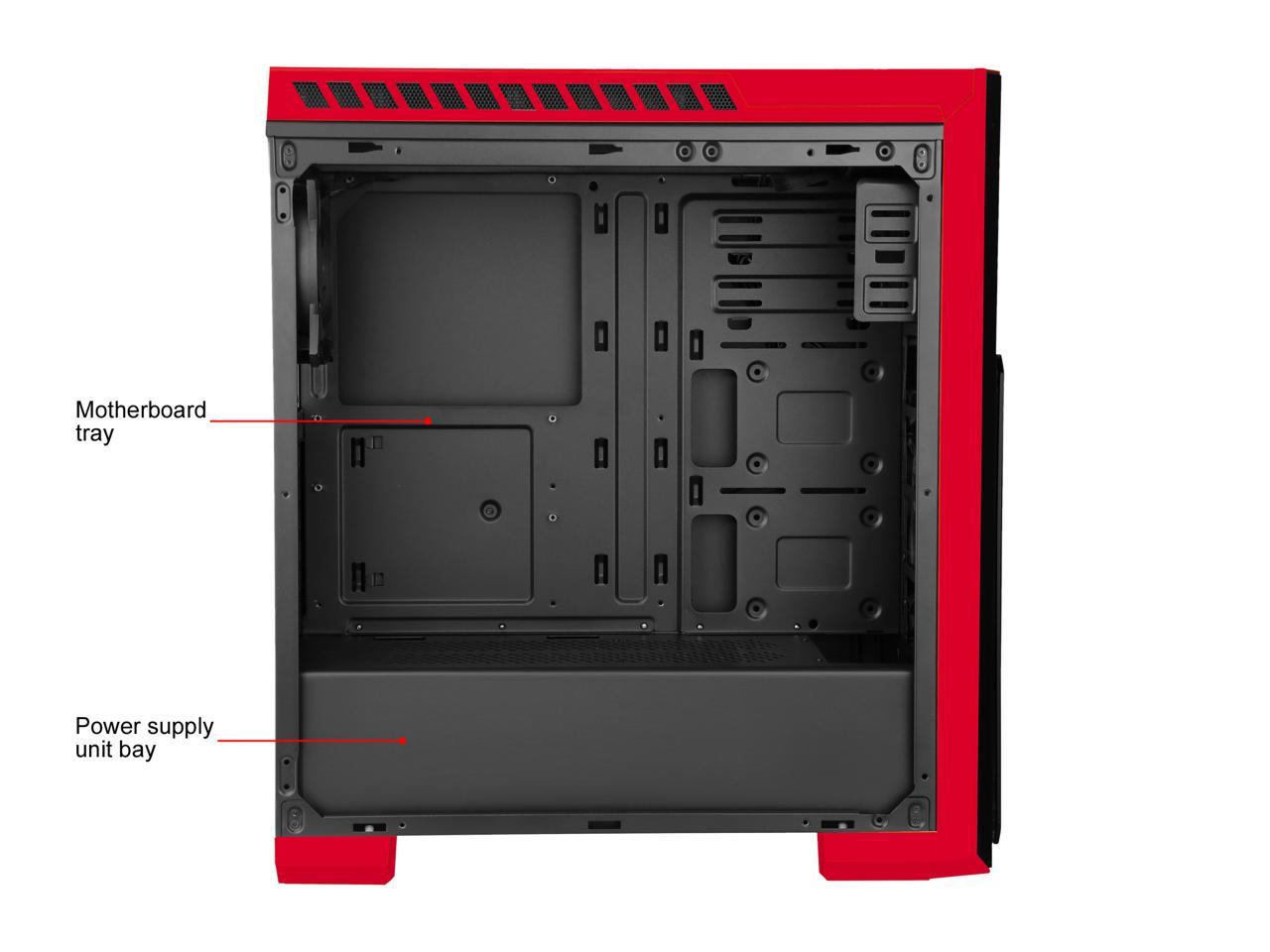 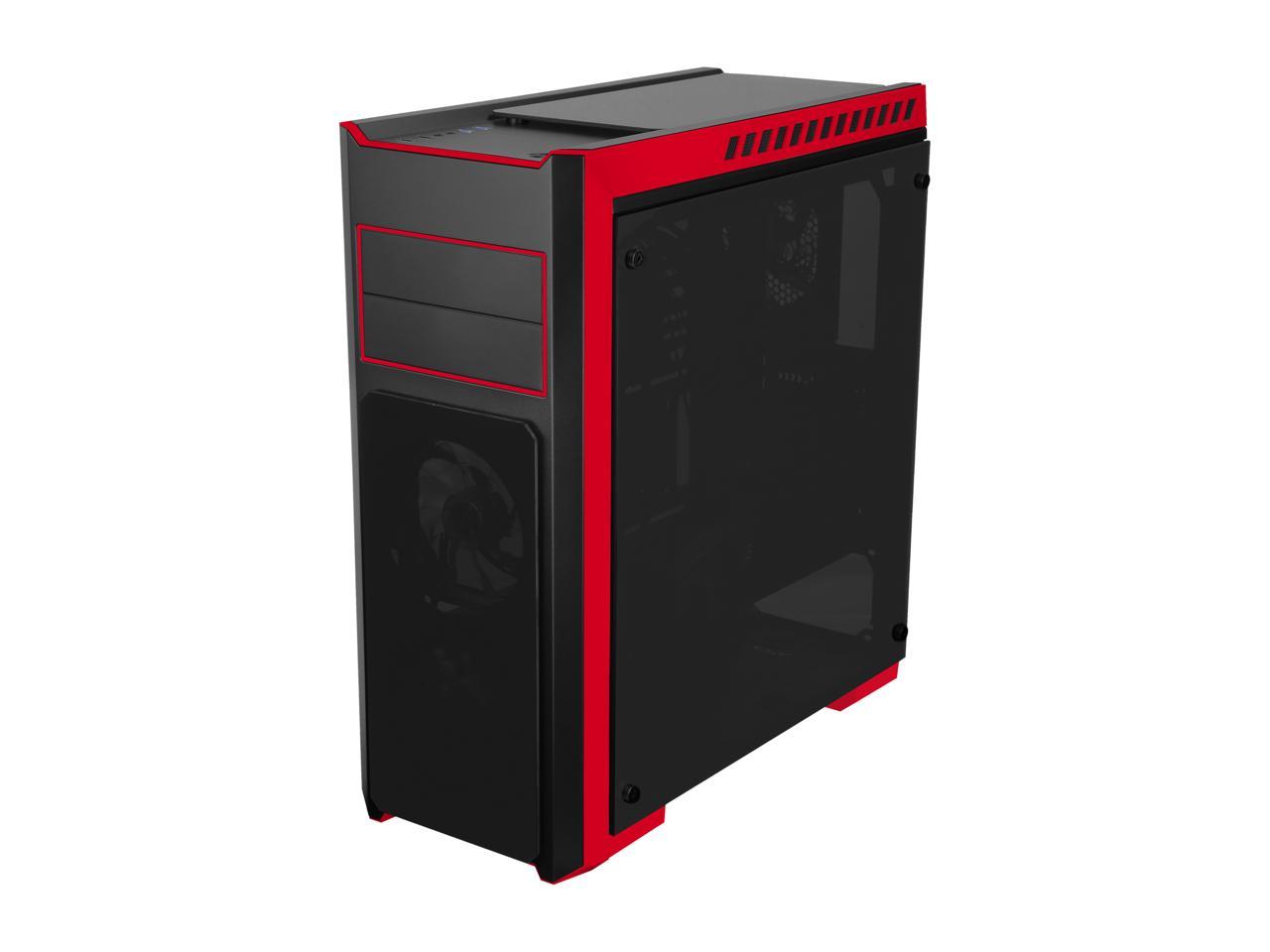 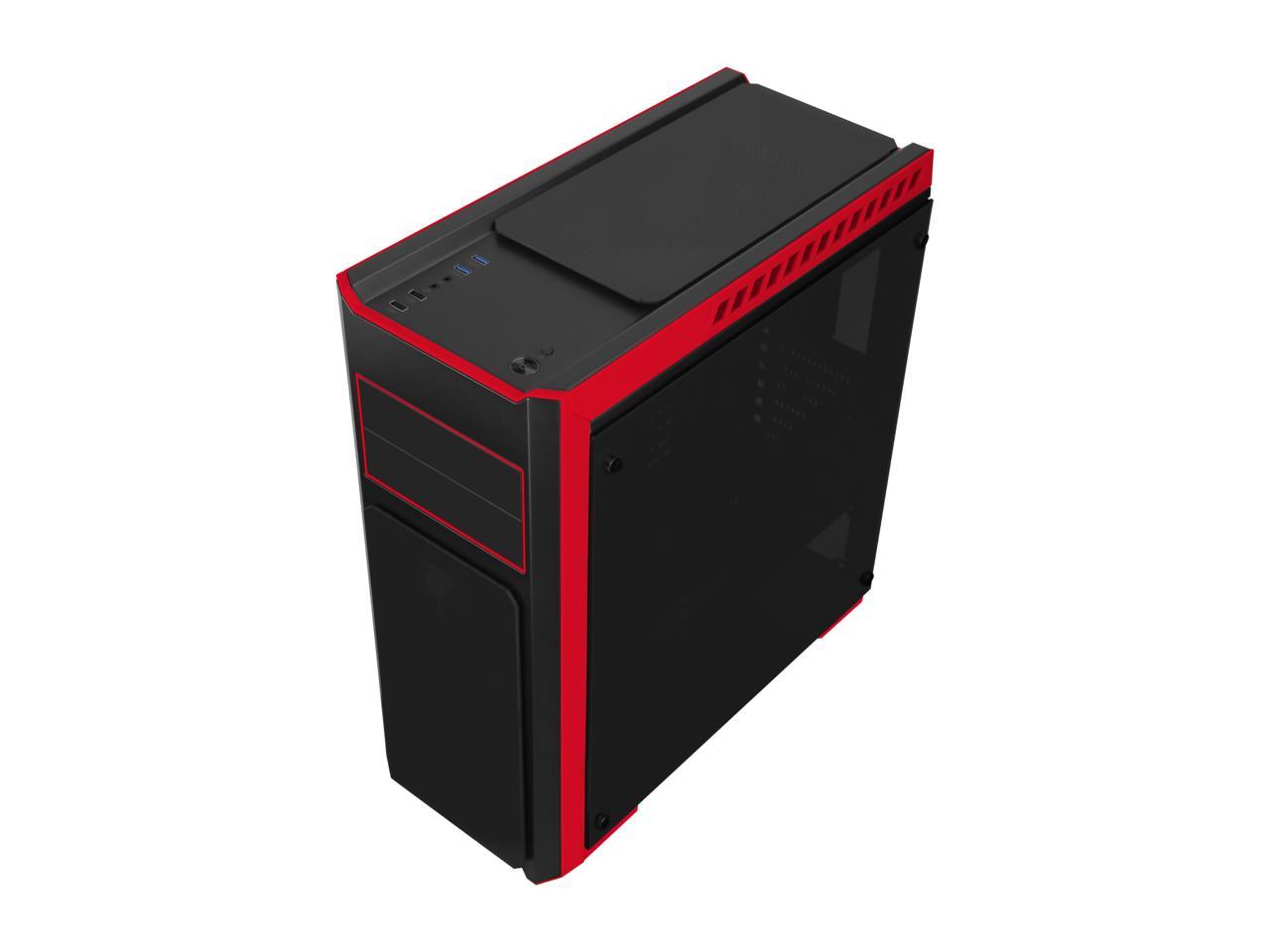 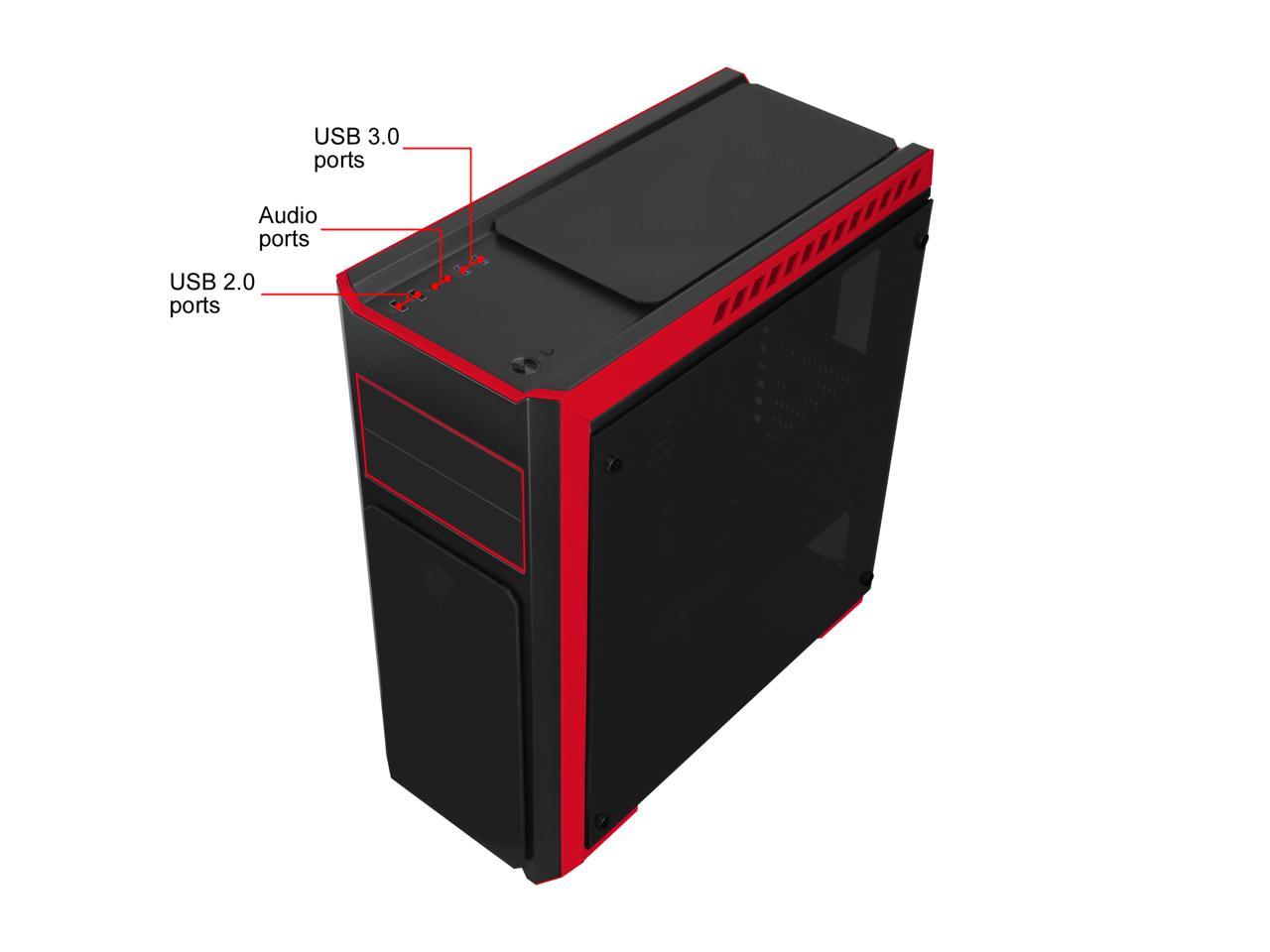 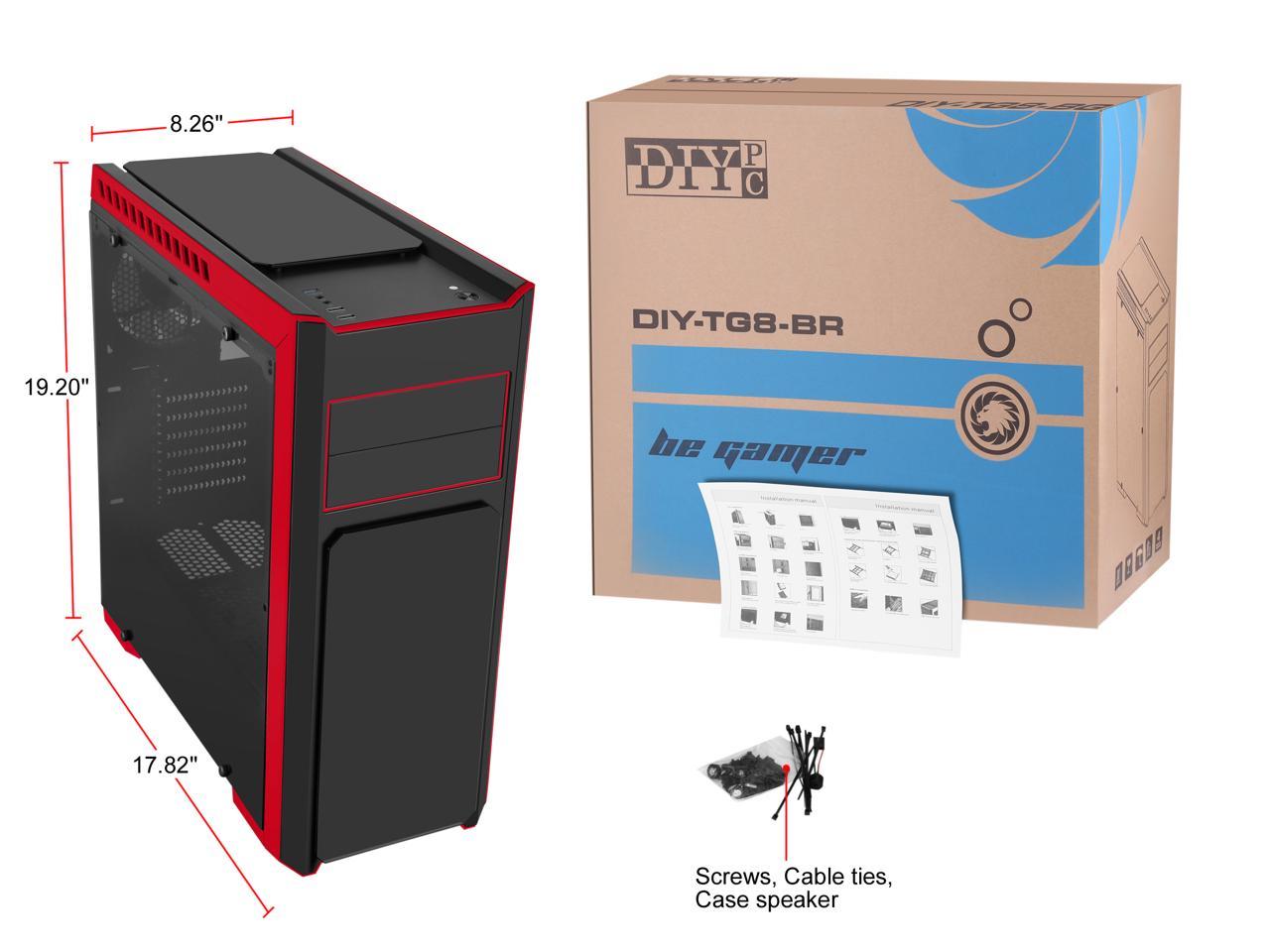 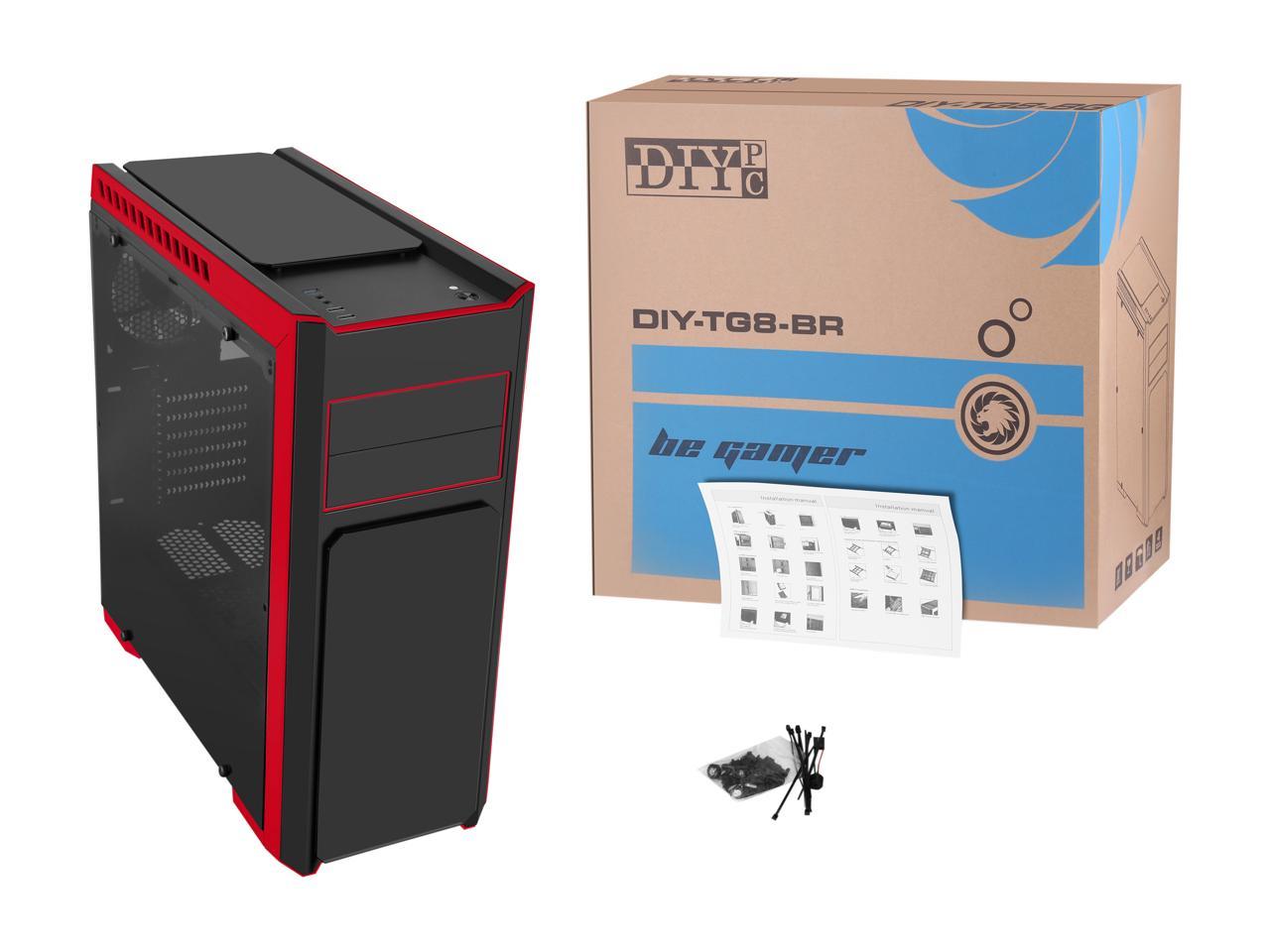 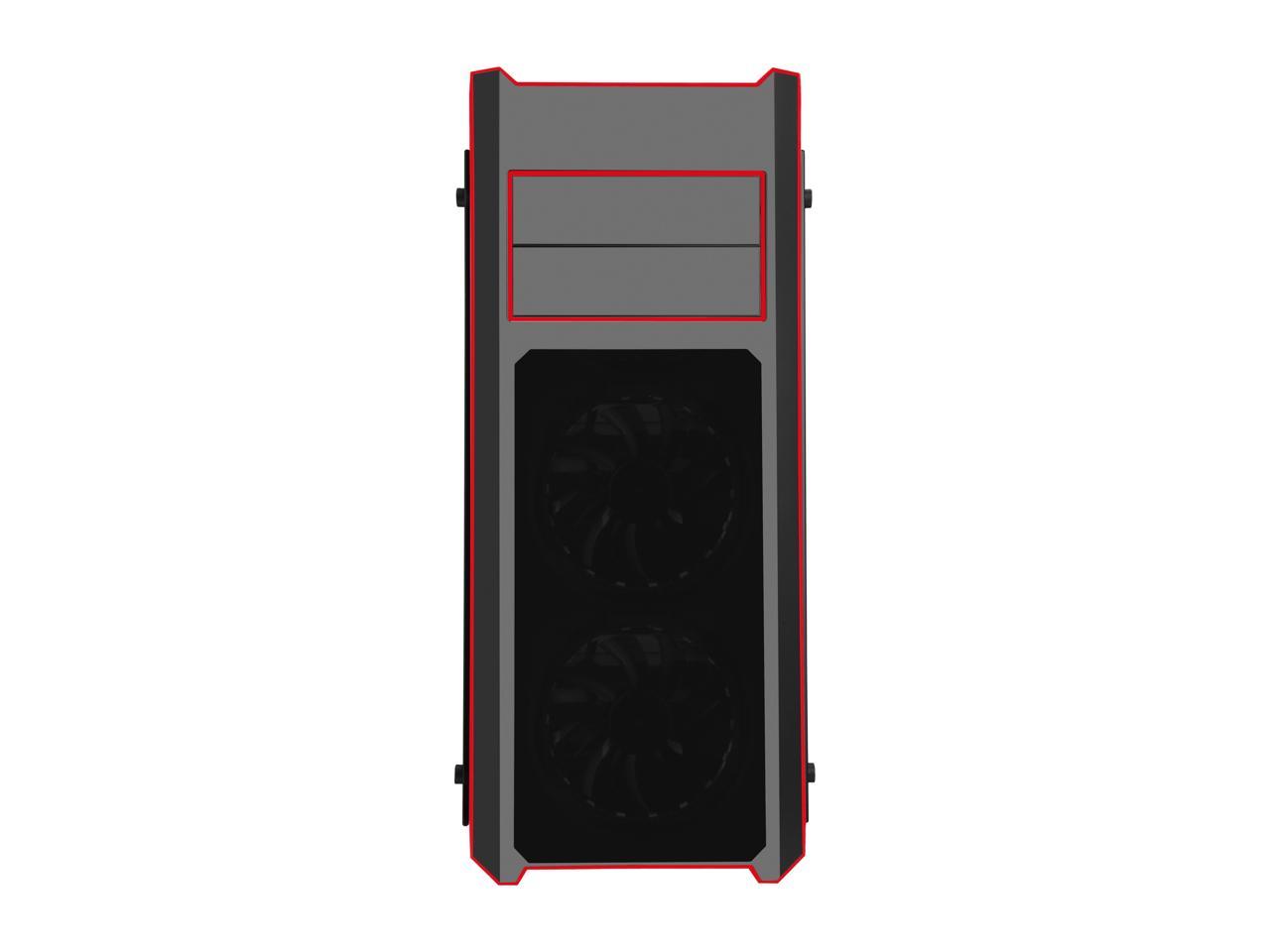 With roomy interior space, the mid-tower gaming computer case gives you great flexibility to build your system. In addition to support for a Micro ATX, ATX or ITX motherboard, the DIYPC DIY-TG8 can accommodate graphics card of up to 400mm in length, and CPU cooler of up to 163mm in height.

With the ability to support up to five fans (three fans preinstalled), the DIYPC DIY-TG8 creates heavy duty airflow to cool down, even the most extreme system.

The DIYPC DIY-TG8 is water cooling ready, so you can choose to cool down your hottest components - the GPU and CPU, with water coolers (sold separately). Its front panel can fit up to 280mm water cooling radiator.

The pre-installed LED light fans not only produce voluminous airflow but also create eye-catching, dynamic lighting effect, making your gaming rig shine and enhancing the overall appearance of your system.

The dust filter at the bottom keeps your computer clean and protected from dust.

Overall Review: -It's a beautiful case, comes with three 33 LED fans. -Would be perfect if there were more room for a bigger PSU and more HDD's. But at least there's two mounts for SSD's.

8 out of 8 people found this review helpful. Did you?
Dabalt On FB
Ownership: more than 1 year
Verified Owner
Great case and surprising as the price was dirt cheap.7/27/2020 4:50:16 PM

Pros: Case was for my daughters first rig. Lots of room for big GPU’s and easy cable management with plenty of cooling options as theirs room for a total of 6 fans. Hidden PSU as well. When we were doing the build my friend and I were so surprised at how good this case was given the price. Will be purchasing another one to replace the old case for the streaming rig. Have had the case for a year now and it’s still doing great.

Cons: None that can be thought of.

Overall Review: Would recommend to anyone for any build

Cons: Be careful in choosing your power supply with this case! Larger power supplies, especially modular ones will have a hard time fitting or will not fit into the bay with the hard drive cage! (In my case I had to drill out the rivets holding in the hard drive cage. Screws would have been better instead of rivets for sure.

Pros: I loved it. Came the next day after order! Fans work well. Glass is pretty strong. I set up my old computer components inside this case and absolutely love it.

Cons: The only thing id say was a little bad was the power supply area. The HDD slots should be push forward a little more or something. I had to cut some of the aluminum out so i could fit my cords since my power supply is a little long.

Overall Review: Other than that one problem im extremely happy and definitely worth the money.

Cons: - Doesn't provide much airflow - One fan needs me to manually spin it for it to work

Overall Review: Had to knock off 1 egg because of the fan issue. Otherwise, it's a good product and I would recommend it to anyone.

Pros: Easy access to hard drive slots More than 2 ssd slots Comes with zip ties for cable management It has connected wires to save space Most importantly, it looks good!

Cons: No Cons! It is amazing in my Opinion!!!

Pros: Well-made case, tempered glass, tidy looking with good options for wire management. And for the price, its a steal.

Cons: Had to use a more compact Seasonic PSU rather than a larger EVGA one. Attaching fans to the top of the case involves removing the whole top and in order to do this, you have to pinch and dislodge a few plastic clip-on anchors from inside the case.

Overall Review: Tight fit for PSU, make sure PSU is like 6 - 6 1/4 inches long only, otherwise no room for wires.

Pros: The Glass panels are on both sides, the top and the front. The panel one side seems sort of irrelevant, but I was amazed at how nice the glass panel on the front looks in person. The pictures do not do it justice! I am placing a LED light on the back side panel on my SSD drives, so they can be seen. So I am making some limited use of the glass panel behind the motherboard. The case still has a DVD/CD Bay. I know they are more irrelevant than ever, but I still have many old discs and I'm not quite willing to give them up yet. I like my old video games sometimes. With so many cases starting to not have them, I wanted to grab a new case with them, while I could The build ended up being very clean. Far cleaner than my previous 10 year old case (which is like ancient, right?). The inside was very well thought out, while keeping things simple. The quality of the steel was very good too. Overall, the case looks better in person than it does in the pictures. The tempered glass is nothing but sleek. The side of the case behind the mortherboard has many good zip tie points going vertical right next to the cable holes. I found cable management on the back-side of the case to be relatively easy. The fans that the case comes with are a good mix of quiet and effective. Some power users will want a more powerful fan or additional water cooling and some people might add fans and get some that are close to silent. For most, I think the 3 fans that it comes with are just about right for the average user. It is quieter than my previous cases and the inside air temperature has held fairly well so far. There are very few air obstructions inside. I usually expect to custom order fans once I get a case and it was nice not feeling the need to do that. All of the red LEDs in the fans look really nice. They are a bit bright in a dark room. I periodically leave the computer on over night to move a large volume of files. I wish the fans had an LED switch, but I know most fans don't have that as an option.

Cons: -The others are right about the hard drive and many cases have this problem. The larger 1000W hard drives will have trouble fitting. Be sure to measure this off if you have a PSU that is larger than most 400W-750W PSU that seem to follow a standard size. My 600W unit fit in just right. -I would have appreciated an extra space for a 3.5" hard drive. There is room for one. Alternatively, there is room for 2.5" cages in addition to the 2 3.5" slots. It would solve many problems if the 3.5" cage was removable as others suggested, but my build was fine. -I wish there was a good way to integrate an SD card slot. I can technically use a 5" bay converted to a 3.5" inch bay and put in an internal card reader, but for just the SD slot... I wish there was a clean way to install one on top. -It would be nice if the main side panel could slide off the case, but admittedly it does look very sleek with the 4 screws and the nice glass beveled edge slightly sticking out. It will take more TLC when doing maintenance or making modifications.. -Cable Management: On the main side of the case where the motherboard exists... 2 caveats: There could be more zip tie positions on the front corners for things like the fan power, the power switch cables, the top USB ports, etc... The other caveat is most power supplies older than a couple of years old will have trouble with 4+4 power cables reaching the motherboard on the top left corner. Extensions are available. I did make mine fit, barely, but the cable path isn't very clean.. I wish there was a single single opening for this cable at the top left side of the case over the motherboard. It would save 8 inches off the cable path for this connection and make it far cleaner.