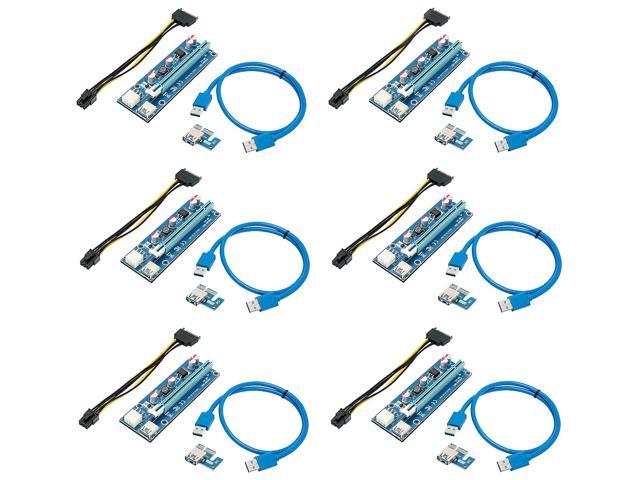 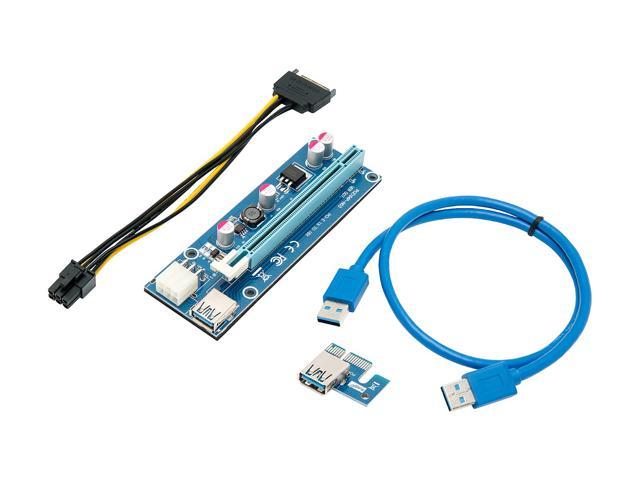 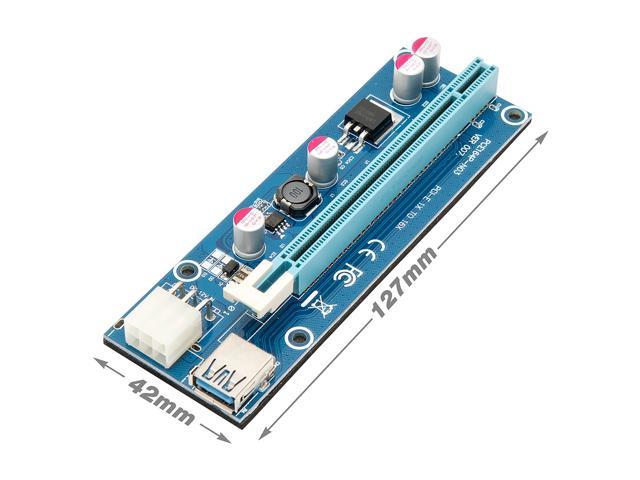 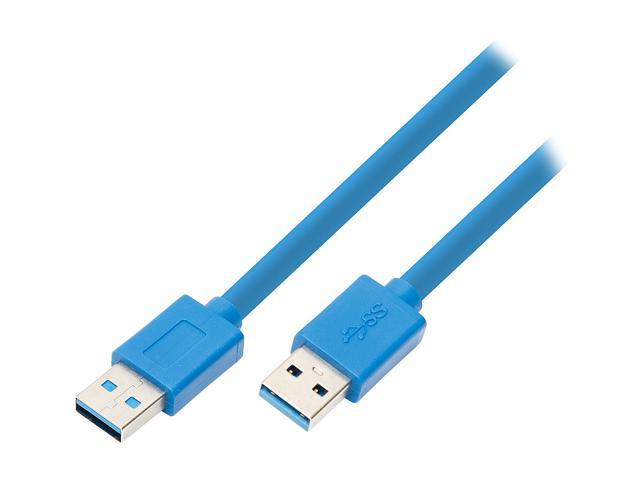 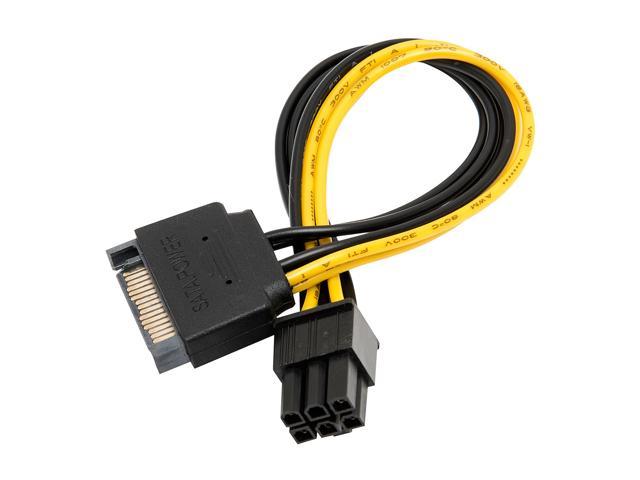 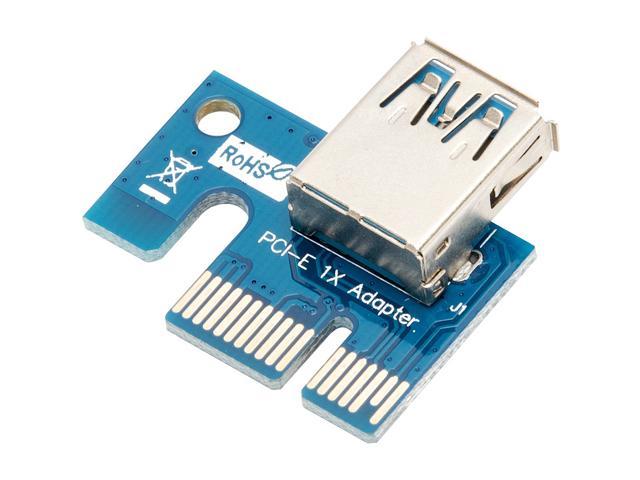 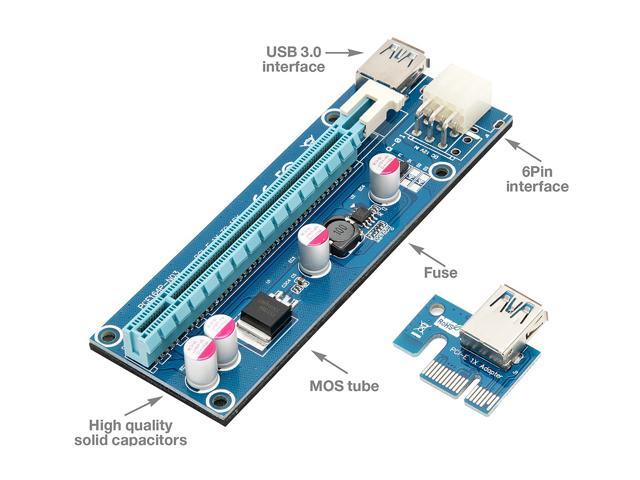 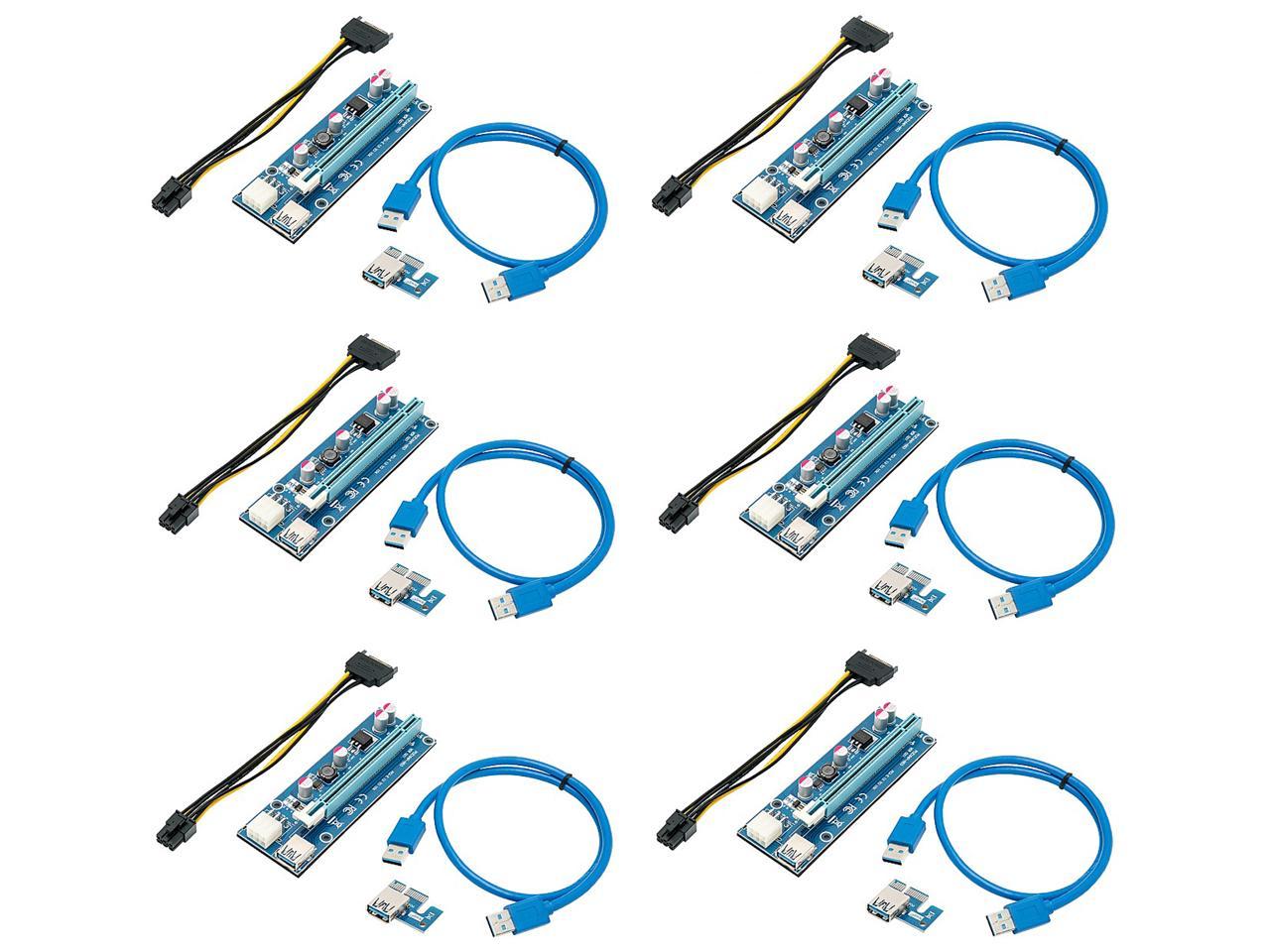 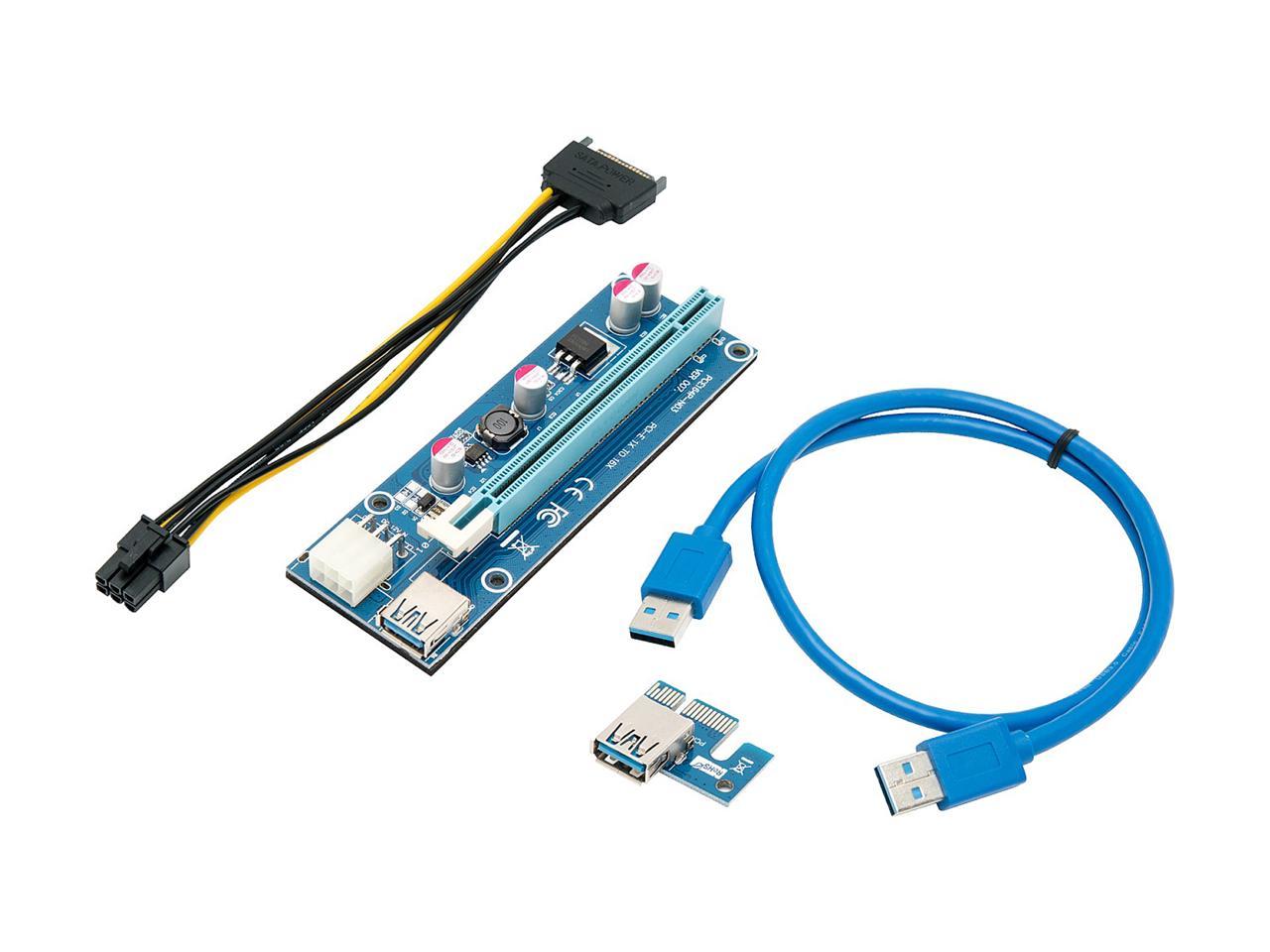 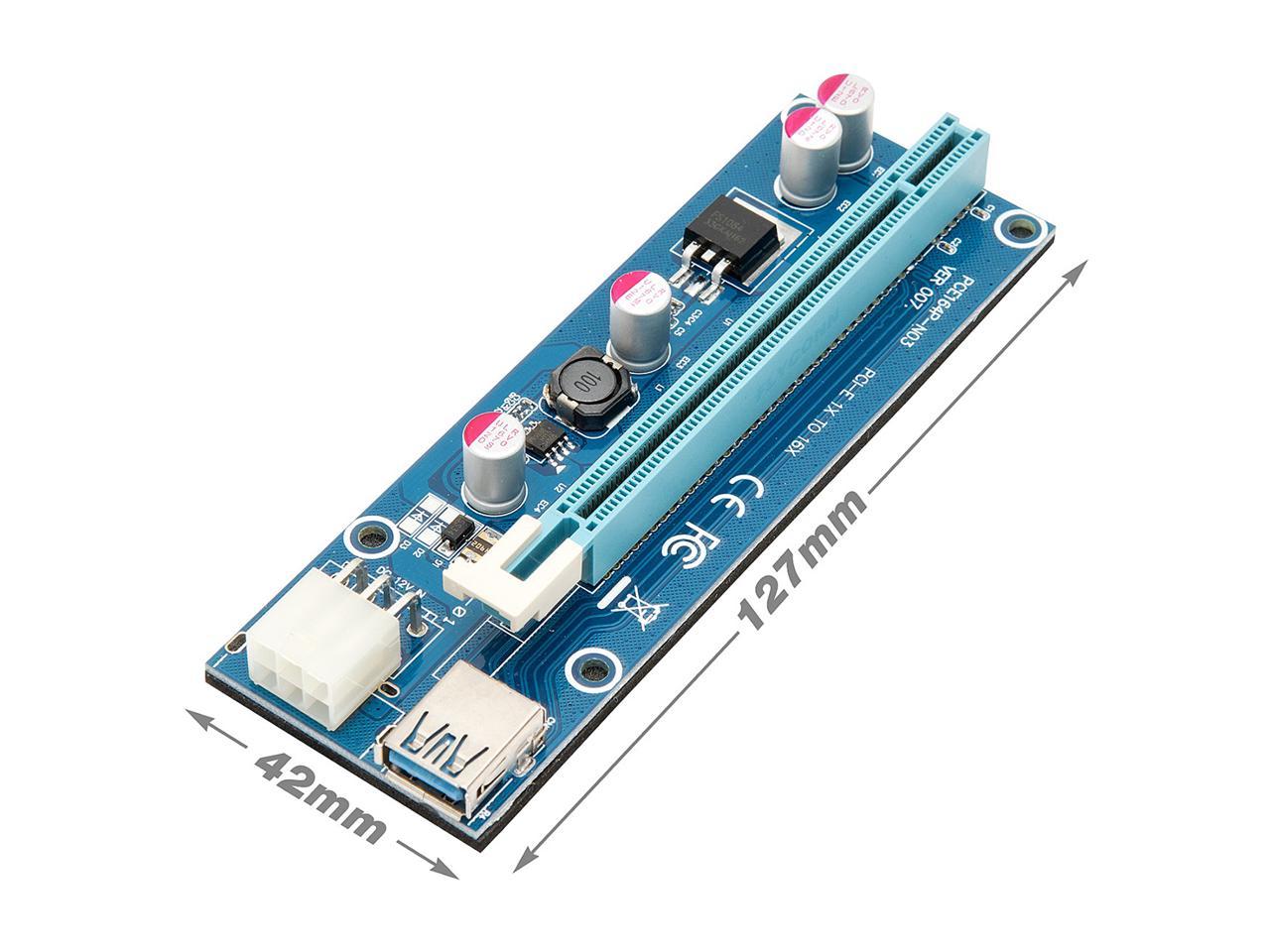 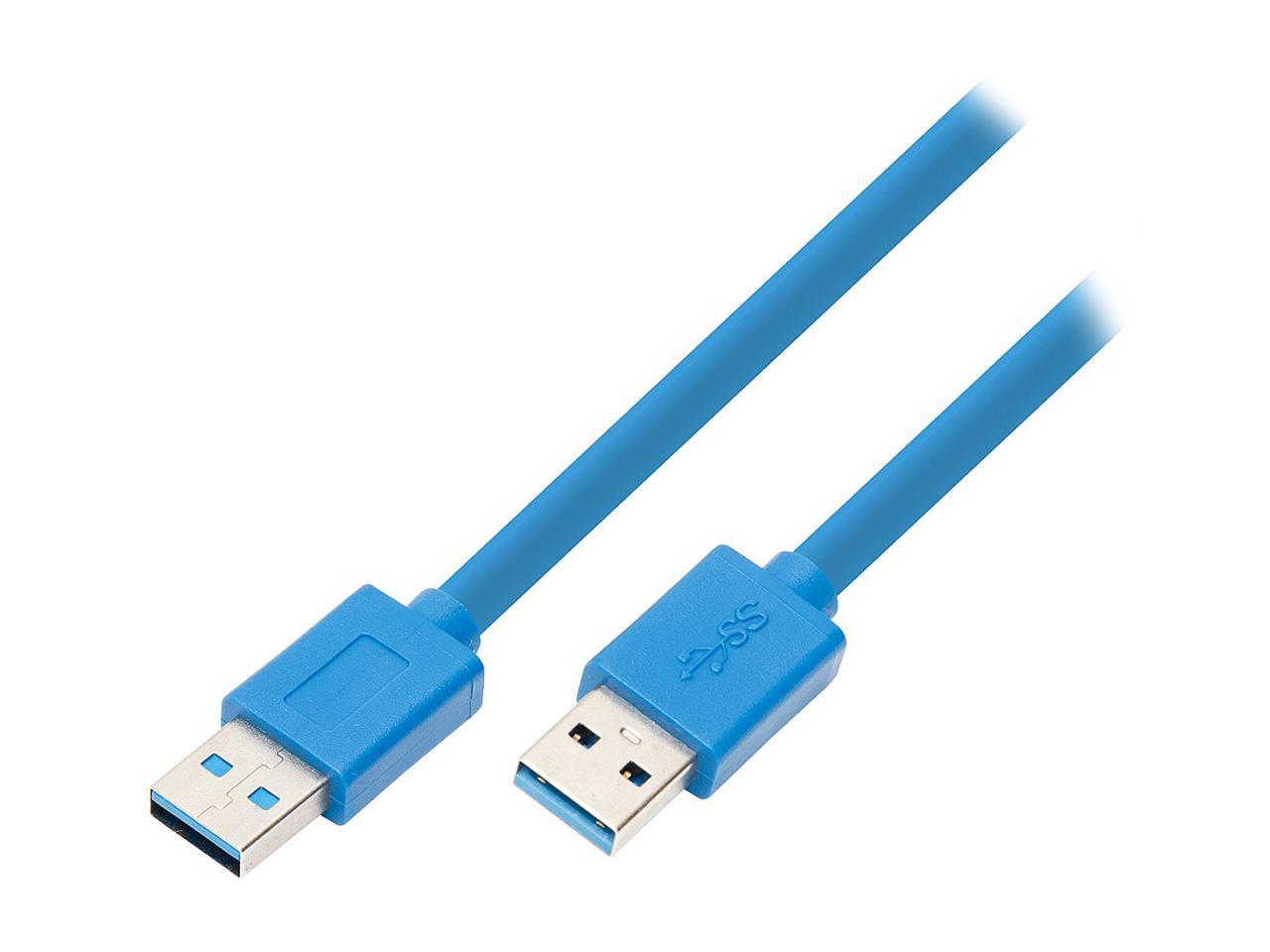 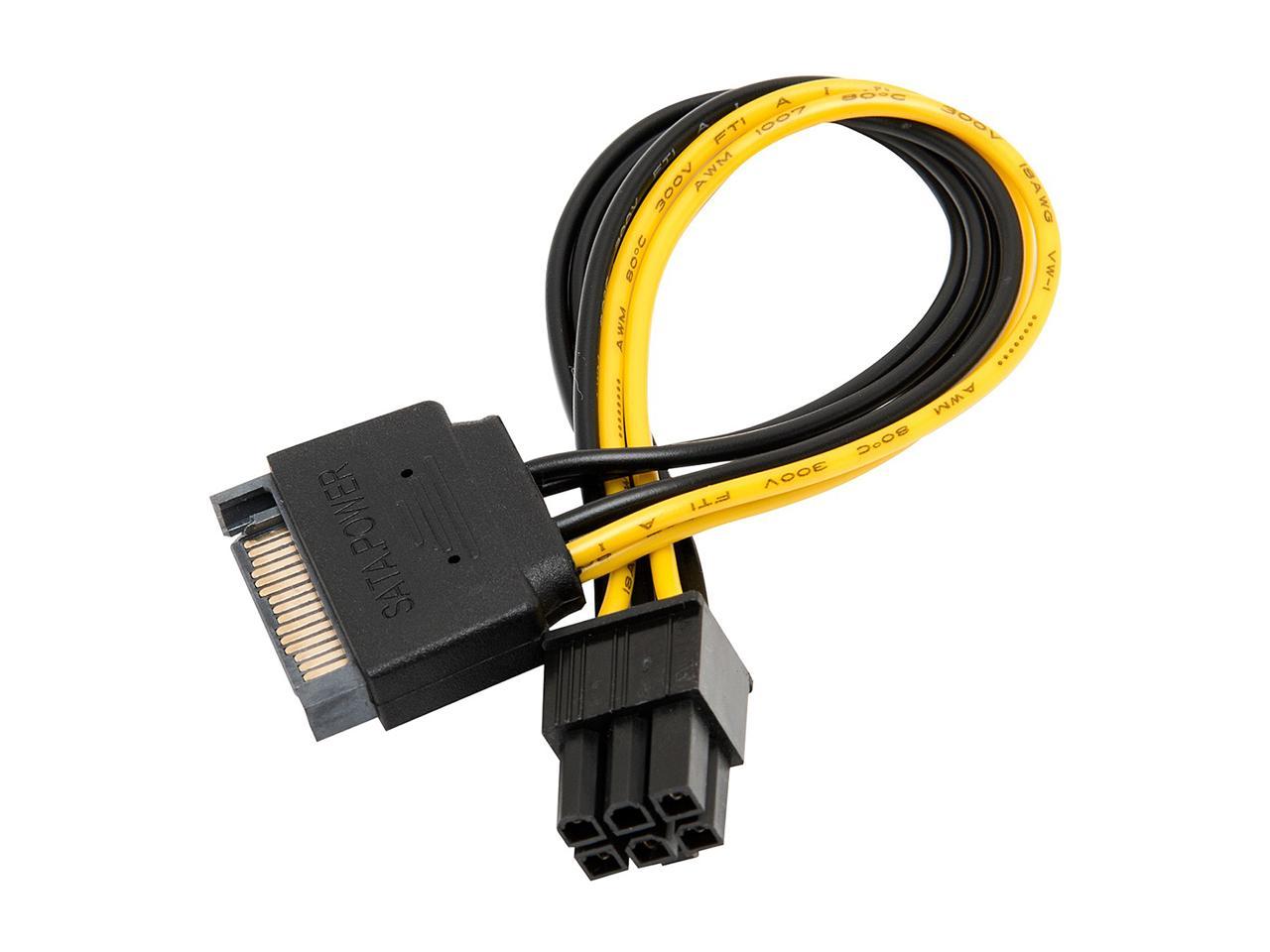 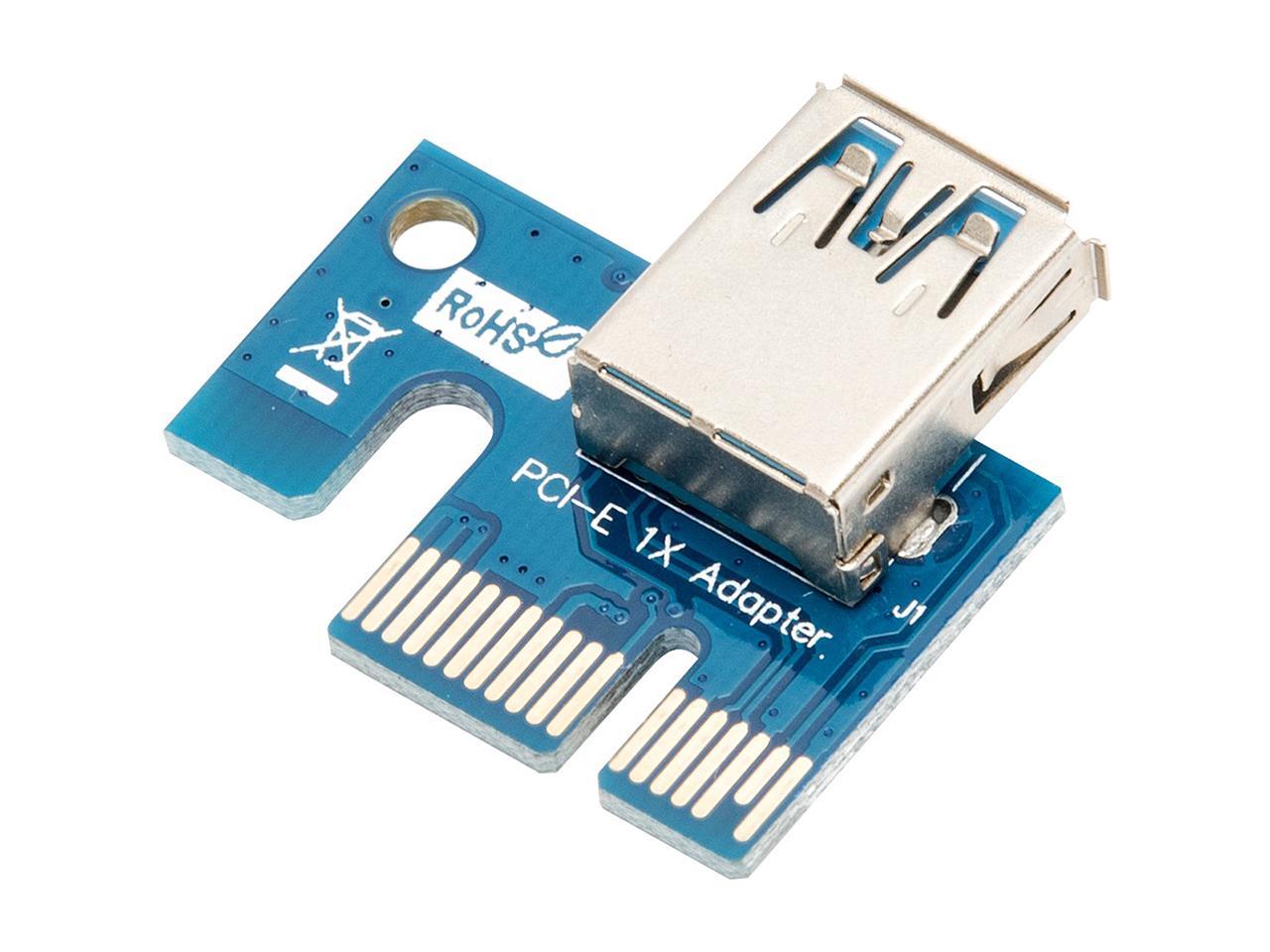 Consisting of a PCIe x16 riser board, a PCIe x1 riser board, a SATA to 6-pin PCIe power adapter cable, and a USB 3.0 cable, this Rosewill PCIe x16 to x1 kit is designed specifically for cryptocurrency mining like Bitcoin, Ethereum, Dogecoin and more. This allows you to interface a PCIe x16 graphics card with a PCIe x1 slot on your motherboard. It makes better cooling possible for the graphics card, as you can mount the card into a dedicated rack or shelf (sold separately). The SATA to 6-pin PCIe power adapter cable allows the graphics card to draw power directly from the PSU, rather than the motherboard PCIe slot, so less power is routed through the motherboard resulting in better stability. A stable mining rig with less downtime means more crytocurrency output. Use the Rosewill Riser Card Kit to get the most out of your investment. Learn more about the Rosewill RCRC-18002

Pros: No dead risers, yet. These each take one 6-pin PCIe power connector

Cons: I am not a fan of the clip on the end of the PCIe x16 slot. The release, rather than being placed in the more easily accessible location towards the "top" of the slot (the direction from the slot away from the graphics card's fans), is mostly blocked by the bulk of a graphics card. However, for mining purposes, this was not worth deducting an egg, since most people don't need to move their graphics cards around much after the initial setup.

Overall Review: I would personally avoid using SATA to PCIe adapters for these applications. SATA connectors are not rated for the same current as 6-pin PCIe or 4-pin molex power connectors, and it's difficult to determine exactly how much power a graphics card may need to pull through the slot, rather than through the onboard PCIe power connectors. Another thing to note is that when I placed my order, this item was listed in my cart as a "Rosewill RCRC-17001 60cm Cable 1 x Female to 2 x Male", which seems like a weird way to put it. However, I received the riser as described and pictured on this page.

Pros: - More efficient than a molex risers - Safer than a SATA risers (when using cards that draw all their power from the pci-e slot)

Cons: - Not noob friendly, no instructions or warnings on what not to do - Questionable value, should be getting two risers for listed MSRP - PCI-e to USB slots are prone to failing, if you notice the hashrate of one of your cards is lower than usual consistently, check to see if any of the gold pins are burned.

Overall Review: A lot of people don't know how risers work, and are complaining about fried motherboards here. The proper orientation is to have that plastic L-part of the pcie to usb adaptor facing away from the center of the motherboard. Try to touch the USB cables when you turn on the PC, they SHOULD NOT be hot. In fact if any cable is hot, shutdown your computer and check your wiring... Be caution about using the sata to 6 pin adapter, use it only if your PSU is modular and has both peripheral and sata plugs combined. EVGA PSUs are notorious for having seperate slots. Do not use more than 1 adapter per sata cable from the PSU. If you overdraw, most good PSUs will shutdown and not damage any internal parts, but this is not a risk worth taking.

Pros: - I bought 5 of them and all 5 worked. - The locking tab on the PCI express slot allows for the cards to be used while suspended. - The 6 PIN power allows for greater flexibility with available adapters so you can use VGA power, Molex power, 8 PIN CPU, and even SATA power if done correctly. - Come with holes to be able to screw into a DIY rack if you choose.

Cons: - The SATA power adapter included is generally considered by most to not be able to safely carry the amount of power needed for cards that are worth mining with. - The 6 pin power is difficult to plug the cable into, snug, so you will want to do so before anything else.

Overall Review: -Currently running 5 GTX 1050 ti cards with two requiring supplemental power. All of them went up to around 1800-1850 MHZ with GPU boost with no tinkering and several oc'ed to 1900+ so power delivery seems to be excellent. - Not the greatest looking mining cards but most people generally don't care about looks. - All 5 worked without issue which is an issue for other cards I have seen reviews for. - The cables were plenty long to reach with most standard racks.

Pros: They work, assuming you use proper cables and get the correct model.

Cons: I received 5 of these. 3 of them are the correct model (matching the pictures and revision number) and 2 of them are not. The latter 2 have different hole spacings and are therefore unusable for my case. The SATA to 6-pin are a complete fire hazard. 6-pin connectors are rated for up to 75W, while SATA connectors are only rated for 1.5A @ 12V (18W).

2 out of 2 people found this review helpful. Did you?
Manufacturer Response:
Dear Customer, I am so sorry for the inconvenience. However, we would be glad to send new Adapter to you for free. Please contact us with your order number or invoice number so that we can send it to you as soon as possible. We do care about your feedback and will continue improving our products in future. Phone: 1- 800-575-9885 Email: rma@rosewill.com Email2: techsupport@rosewill.com Thanks, Rosewill Customer Care
LUIS C.
Ownership: 1 month to 1 year
Verified Owner
Riser Failed8/1/2018 8:30:55 AM

1 out of 1 people found this review helpful. Did you?
Manufacturer Response:
Dear Luis, I am so sorry to hear the riser failed. Since the item carries its 1-year replacement policy, we would be glad to send you a RCRC-17001 for free. Please contact us back at below with your order number or invoice number so that we can further assist you. We do care about your feedback and will continue improving our products in future. Phone: 1- 800-575-9885 Email: rma@rosewill.com Email2: techsupport@rosewill.com Thanks, Rosewill Customer Care
Elio N.
Ownership: 1 week to 1 month
Verified Owner
3 weeks life6/22/2018 9:19:30 PM

1 out of 1 people found this review helpful. Did you?
Manufacturer Response:
Dear Elio, I am so sorry for the inconvenience. However, we would be glad to send new RCRC-17001 to you for free. Please contact us with your order number or invoice number so that we can send it to you as soon as possible. We do care about your feedback and will continue improving our products in future. Phone: 1- 800-575-9885 Email: rma@rosewill.com Email2: techsupport@rosewill.com Thanks, Rosewill Customer Care
Anonymous
Ownership: 1 day to 1 week
Verified Owner
mining card2/11/2018 2:01:19 PM

Pros: it works just as expected. all cables are included. Nice 6 pin power connector which is the best solution among all available choices. no burning, no funny smell.

Overall Review: Nice to have this mining card made by a name brand. Will buy more in bulk if bitcoin price goes higher.