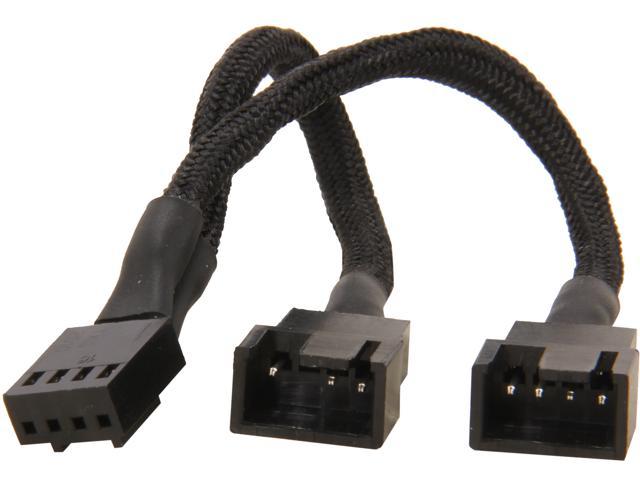 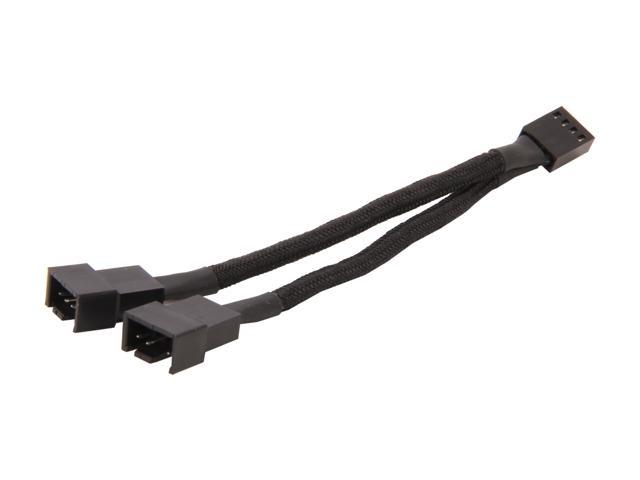 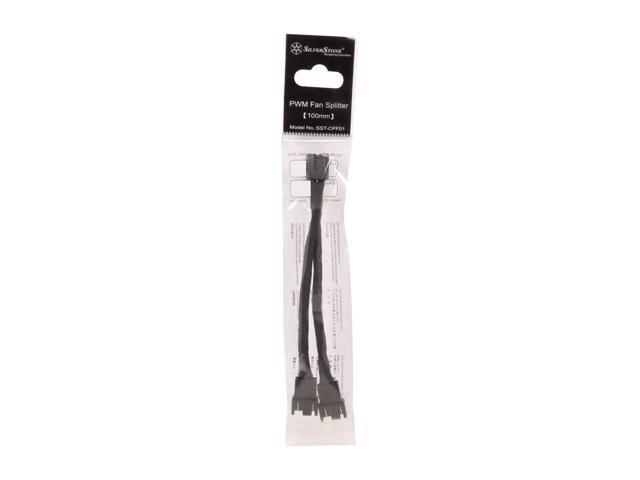 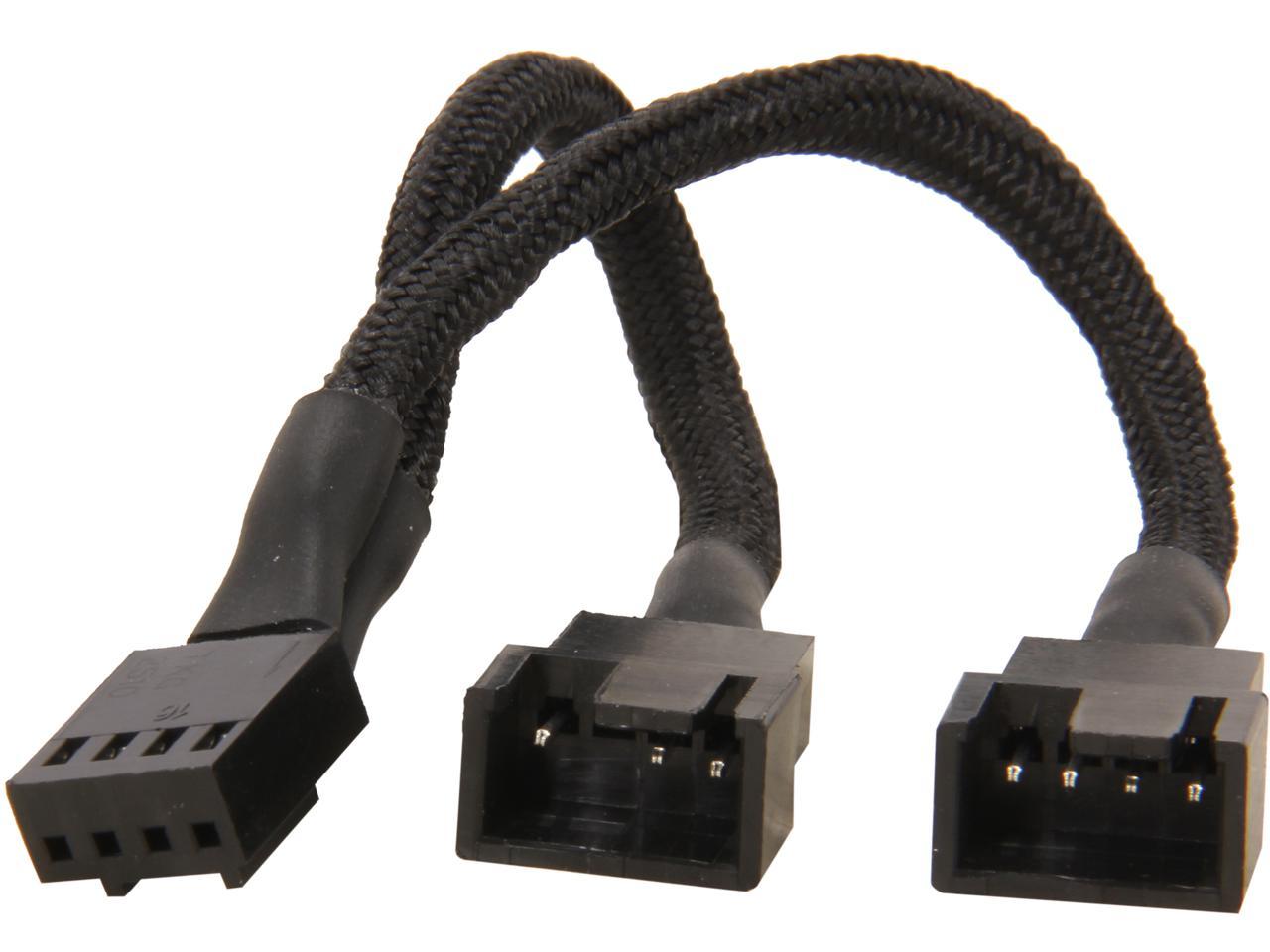 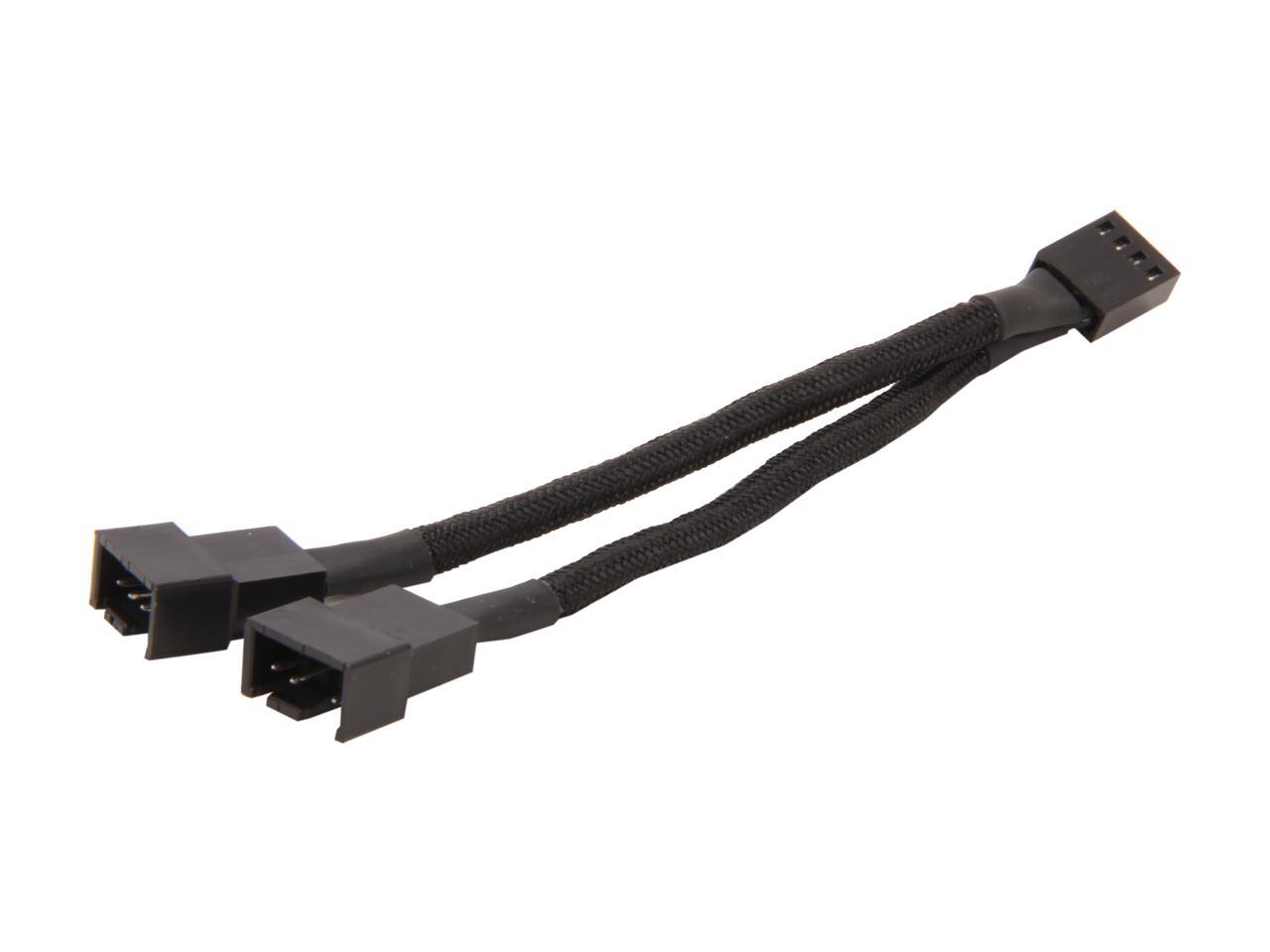 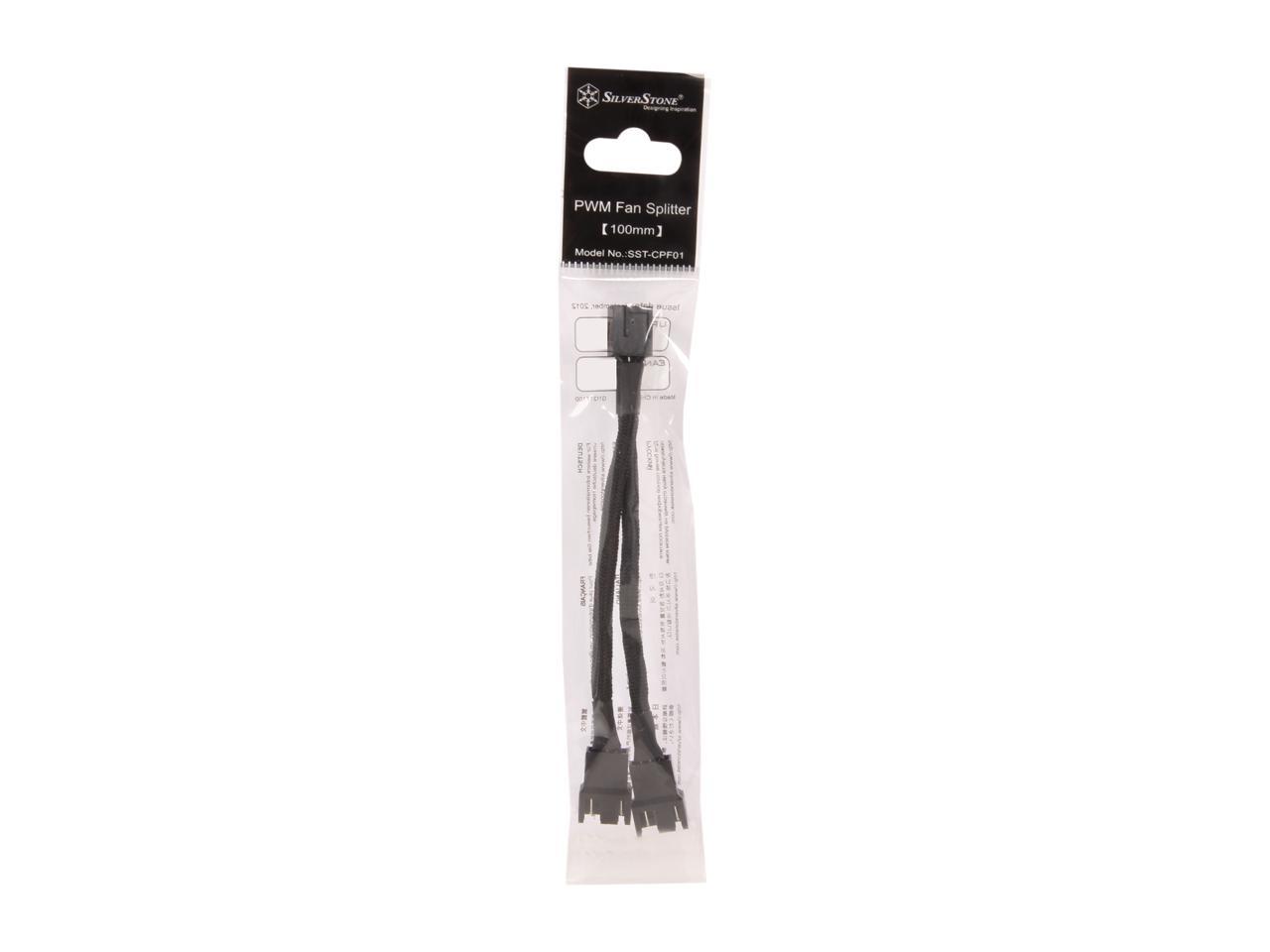 The Silverstone CPF001 fan splitter cable allows you to connect two fans to a single pin header on your motherboard. Only one of the male connectors has the full 4-pin structure for complete PWM function (the other is 3-pin with speed detection pin not present), thus there will be no interference when using two PWM fans. And the cable is fully sleeved for a clean, professional look inside your chassis. For those who require additional cooling in their systems, CPF01 will be the perfect solution.

Learn more about the Silverstone CPF01

Pros: Can be used on 3 pin and 4 pin fans, and headers. Just buy this one and use for either or. 4" is a manageable length. The heat shrink tubing is more to protect the ends of the sleeves than for wire management.

Cons: FYI for LAN party goers...frequent movement at the heat shrink tubing would put a lot of stress on the wires at the plugs.

Overall Review: I bought one of these to play with on a recent build that had 2 (3pin)rear fans. Ended up using the rear most 3 pin header to power the fans, just in case a PWM fan is needed up front. There isn't a way to accurately monitor the RPM of 2 fans from one header, so don't expect it to. I haven't tried with a mix of 3 and 4 pin fans on either type of headers.

Cons: On each of the two I bought, the sleeving is really loose on one of the two cords. It doesn't really matter, so I didn't take an egg off, but it is kind of a strange thing.

Overall Review: One of the pins is missing in one of the male connectors, as shown in the image. This is not a defect! The missing pin is the tach signal, and if it were not omitted on one of the plugs, both fans would be modulating on the same line. The motherboard would not be getting an accurate RPM signal that way. This way, only one of the two fans sends its tach signal (the one with all four pins on the connector, obviously) reports its RPM, but the other one will still follow the PWM signal. In addition, if you need a 3 pin fan splitter (voltage modulation rather than PWM), these 4-pin splitters will still work as long as the header on the motherboard is not shrouded with plastic (which would keep the larger 4 pin connector from seating on a 3 pin header). I am using that configuration right now for my intake case fans, and it works just fine.

Pros: 1 male to 2 female 4 pin fan connector. You can indeed control the fan speed of both fans connected to the port. Sleeved for protection, and nice sleek black coloring.

Cons: It's not free? Seriously there are none.

Overall Review: For those complaining about a "missing pin" there are none missing. The reason one has 3 pins and the other has 4 is for the explicit reason of getting rpm speed from the fan connected to that port with 4 pins. The connection with 3 pins simply goes at the clocking and speeds set for the one with 4 pins. If you complain about this feature seriously learn a thing or two about computers firstly and secondly go buy a new motherboard. This adaptor gives you great bang for buck. I tested with 2x 120mm fans, a 120mm fan with a 90mm fan, a 120mm with 80mm, 120mm with 40mm, and each fan size with their corresponding fan size. And was honestly stunned when even the 40mm fan changed speeds with the 120mm fan. If you're like me and want as many fans everywhere on your computer this is definitely for you. I WILL be buying at least one more of these if not two. And the shipping time? It was about a week, I live in Texas and this was by far the quickest over sea shipment I've ever had. I can assure you this product works and has no faults. The likelihood of it arriving doa is also dang near impossible. It'd have to have a faulty wire and because it's just wires this product could of even got wet when shipped and it'd be just fine. If you don't believe me do research upon computers. I'm a computer enthusiast and I love computers it's not only my hobby it is my passion and my means of work. don't discredit this company they deserve respect for the quality they've given at a great price.

Pros: - Looks great - The plugs are exactly standards, so it have no problem fitting

Overall Review: For the ones asking why there's a lacking pin on one of the endings, it's because your computer can't receive 2 RPM informations on the same wire. So you'll only get the RPM from one of the 2 fans.

Pros: used this with a CM blade-master for a push/pull on a hyper 212+ has sleeves over the cables for some protection and looks. doesn't feel flimsy or weak.

Overall Review: Good for use on push pulls if you want both fans to use PWM and only have one header. I have 2 cpu fan headers but one is 3 pin and 1 is 4 pin. so this came in handy. One of the inputs has a pin missing that is the signal pin so it doesnt conflict and confuse your mobo.

Overall Review: This is a really nice sleeved fan splitter. It properly splits the PWM function so the motherboard can control and power 2 4-pin PWM (together, not independently). It says in the description that it's 3.94" long but that's the measurement of the cable itself. The total length from the end of the connectors is 5.25". Worked out perfect for me. I appreciate quality, precision and attention to detail which are qualities that all of the SIlverstone products I've used have. From something as simple as this fan splitter to a USB 2.0 to USB 3.0 internal header adapter to their 3.5" to 2.5" HDD bay adapter, they're all just really well made products. I'm still loving my 6 yr old Temjin TJ09 case too. Their customer support is excellent as well, though I wouldn't expect you'd ever need to call them with questions or service for a fan splitter.

Pros: I bought this so that I could connect two case fans to one CHA_FAN header on my ASRock X370 Taichi. I had forgotten that the fans were 3-pin instead of 4-pin PWM, but this splitter still does the job of providing power to both fans. Also, the braided cable has a quality feel to it, similar to the splitters that come with some Noctua fans. No real complaints here.

Cons: It added 99 cents to the total shipping cost for my order.

Pros: Splitter has one pin removed from fan header....this allows RPMs to stay constant and not jump around.

Overall Review: Another winner from Silverstone....I have 3 of these linked to my son's fan controller...this frees up the other headers on the controller for other devices.