Feel 100% satisfied with your purchase -- with no restocking fees & no return shipping costs* within 30 days of delivery. Learn More
Price Alert
Add To ListFound on 81 wish lists 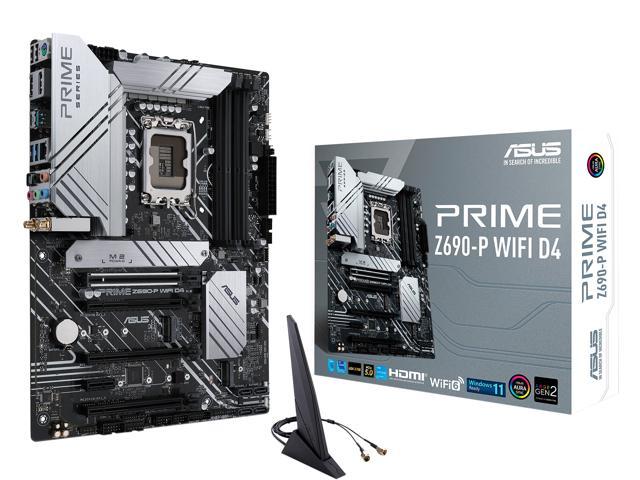 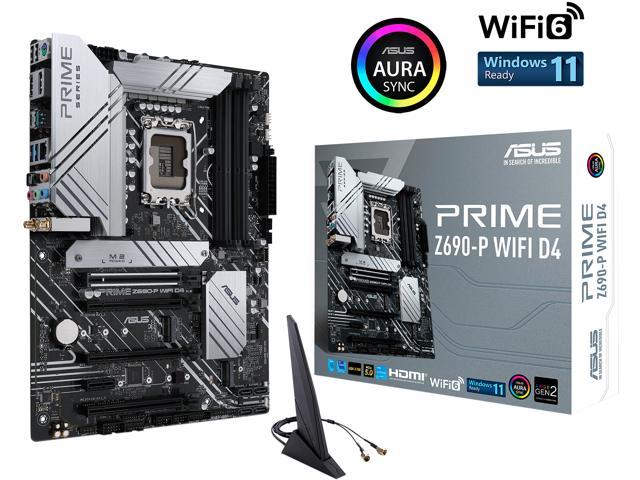 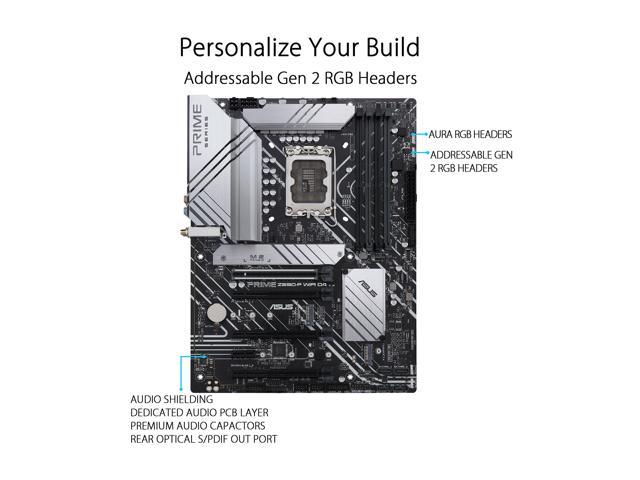 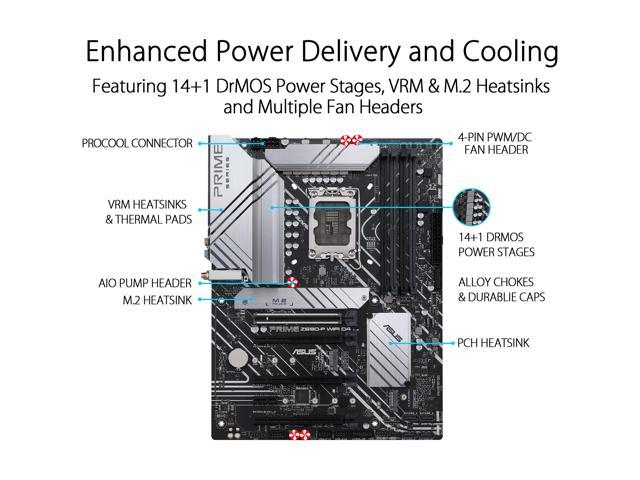 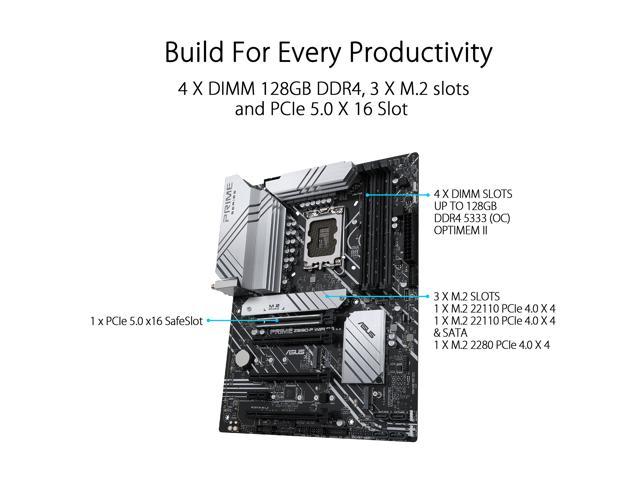 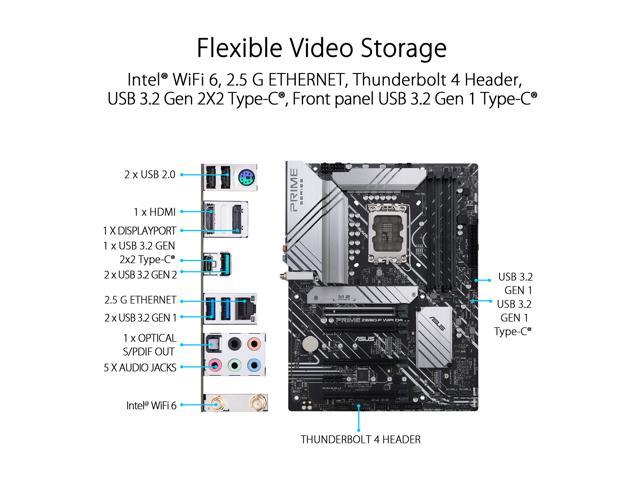 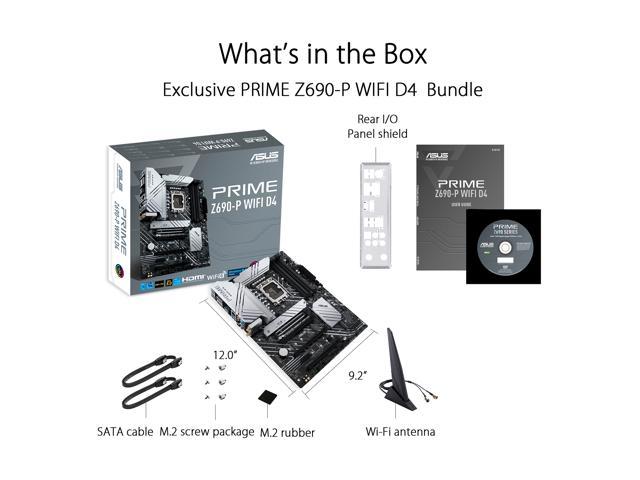 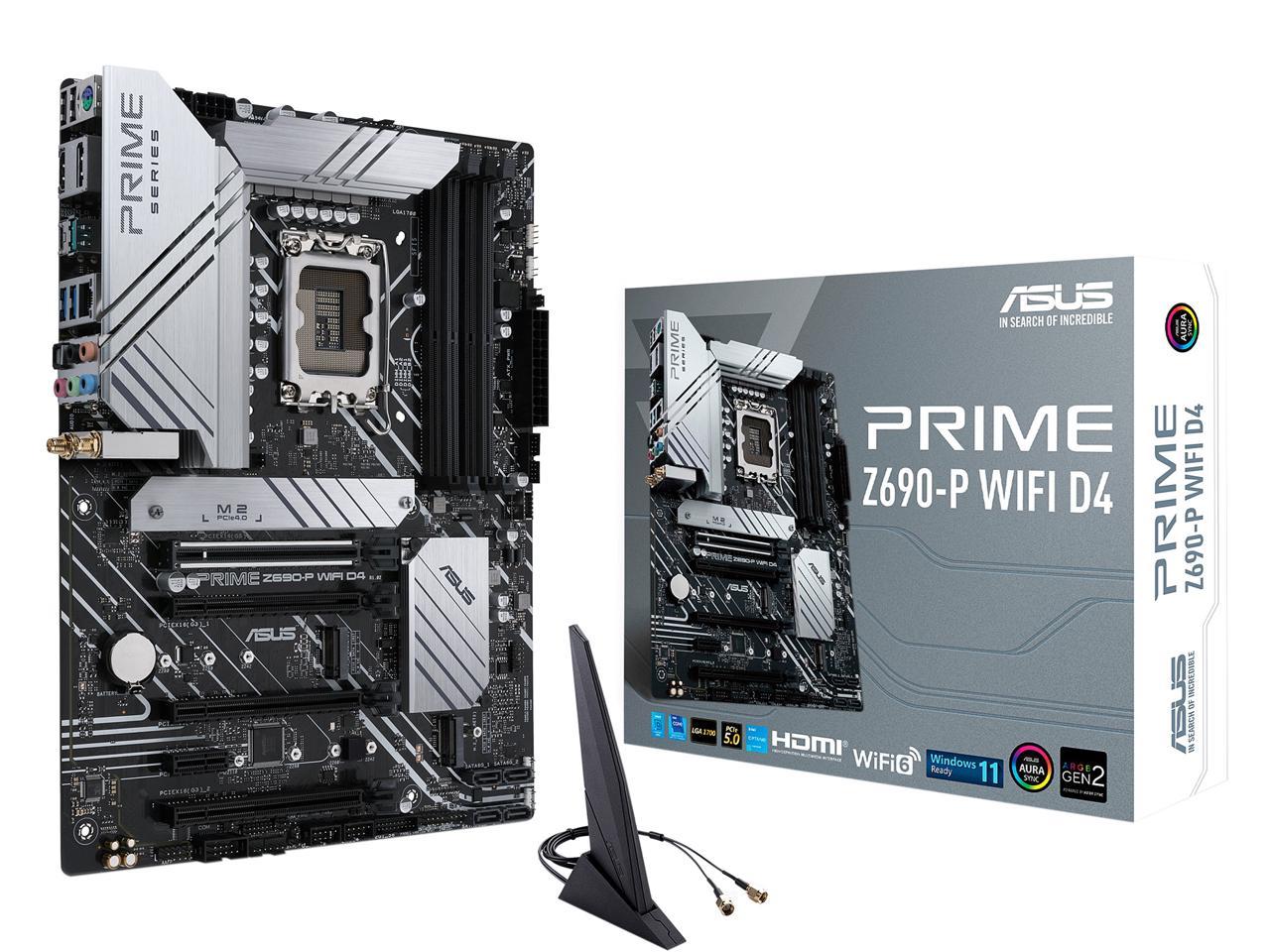 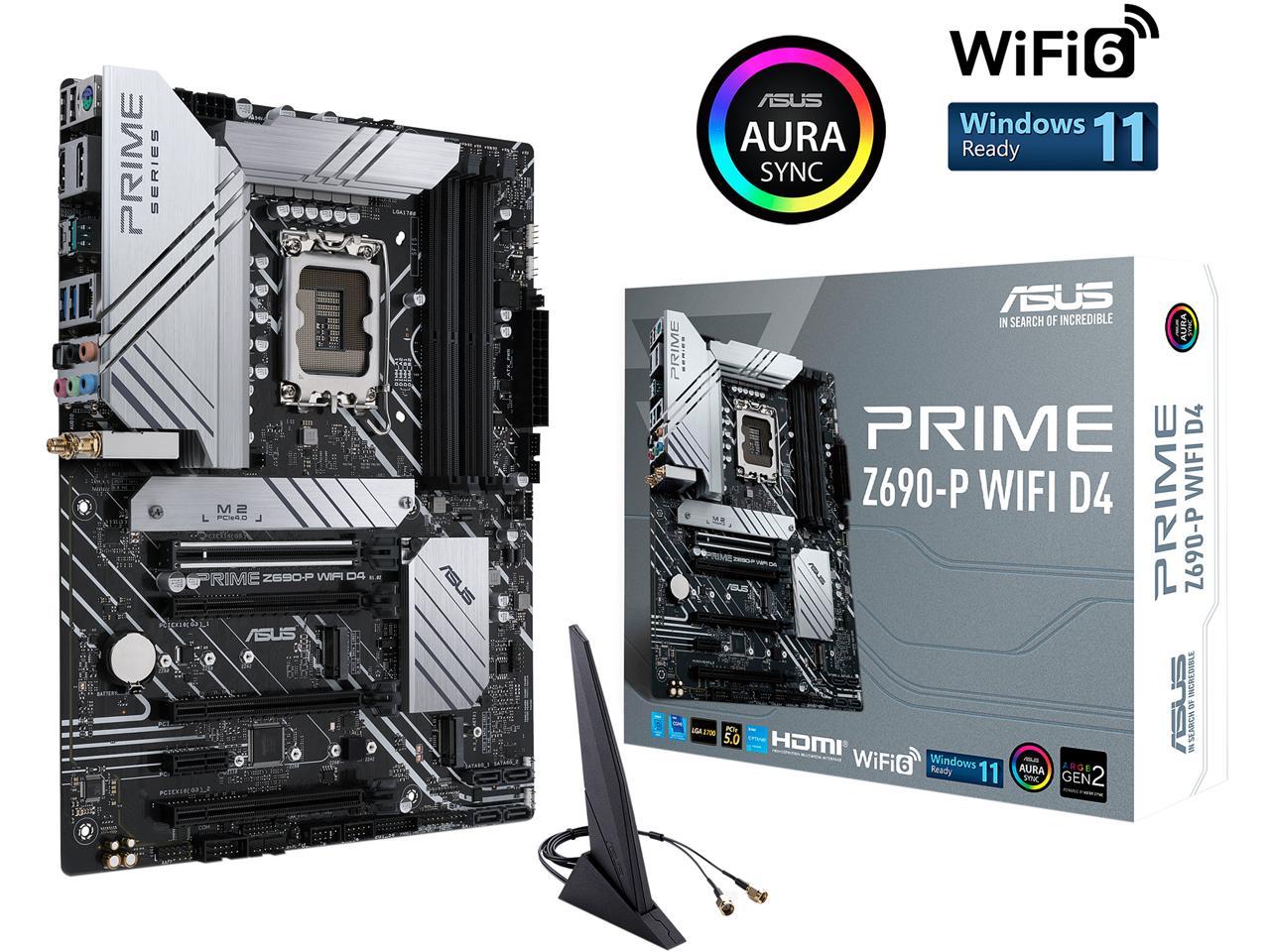 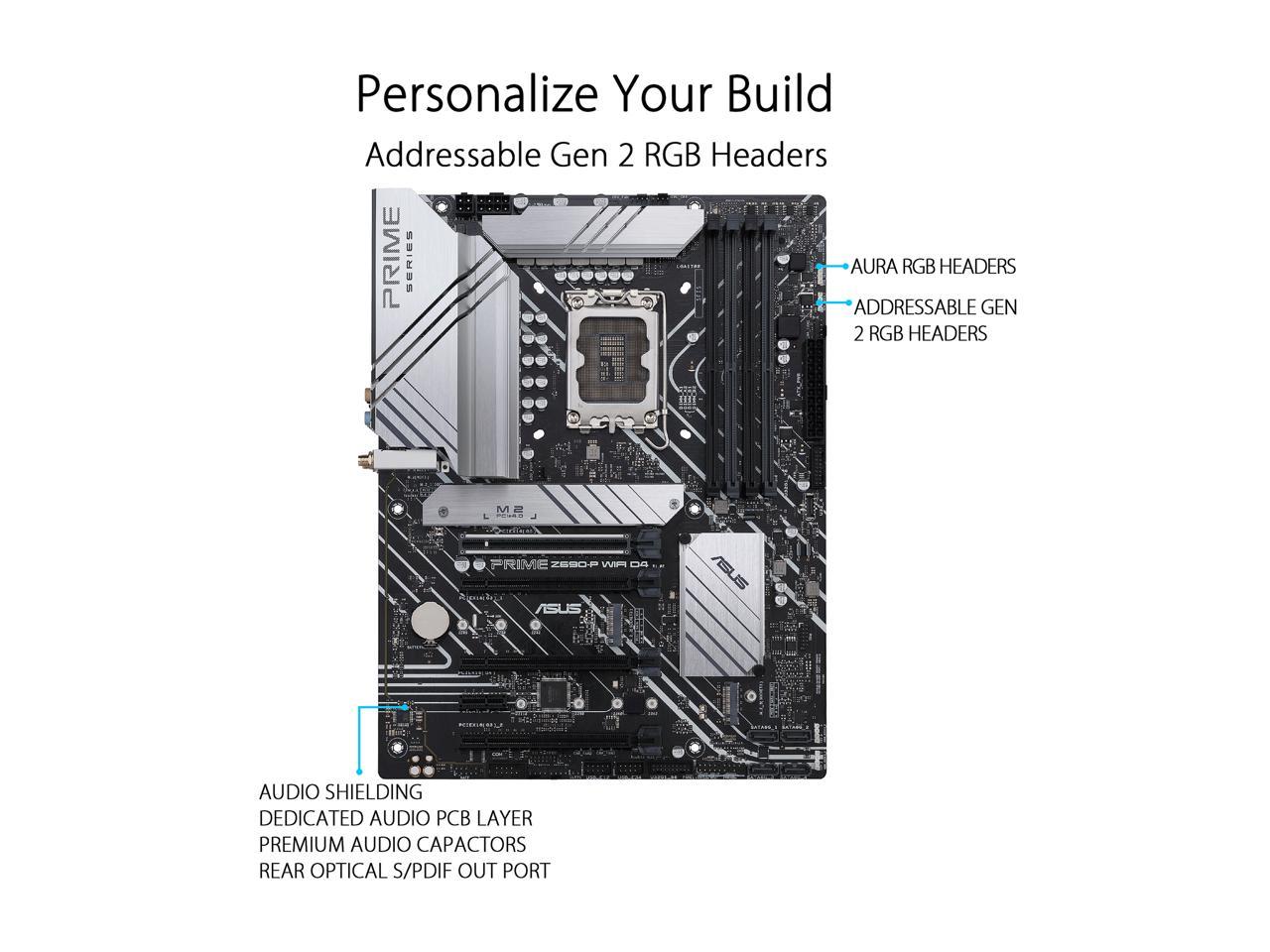 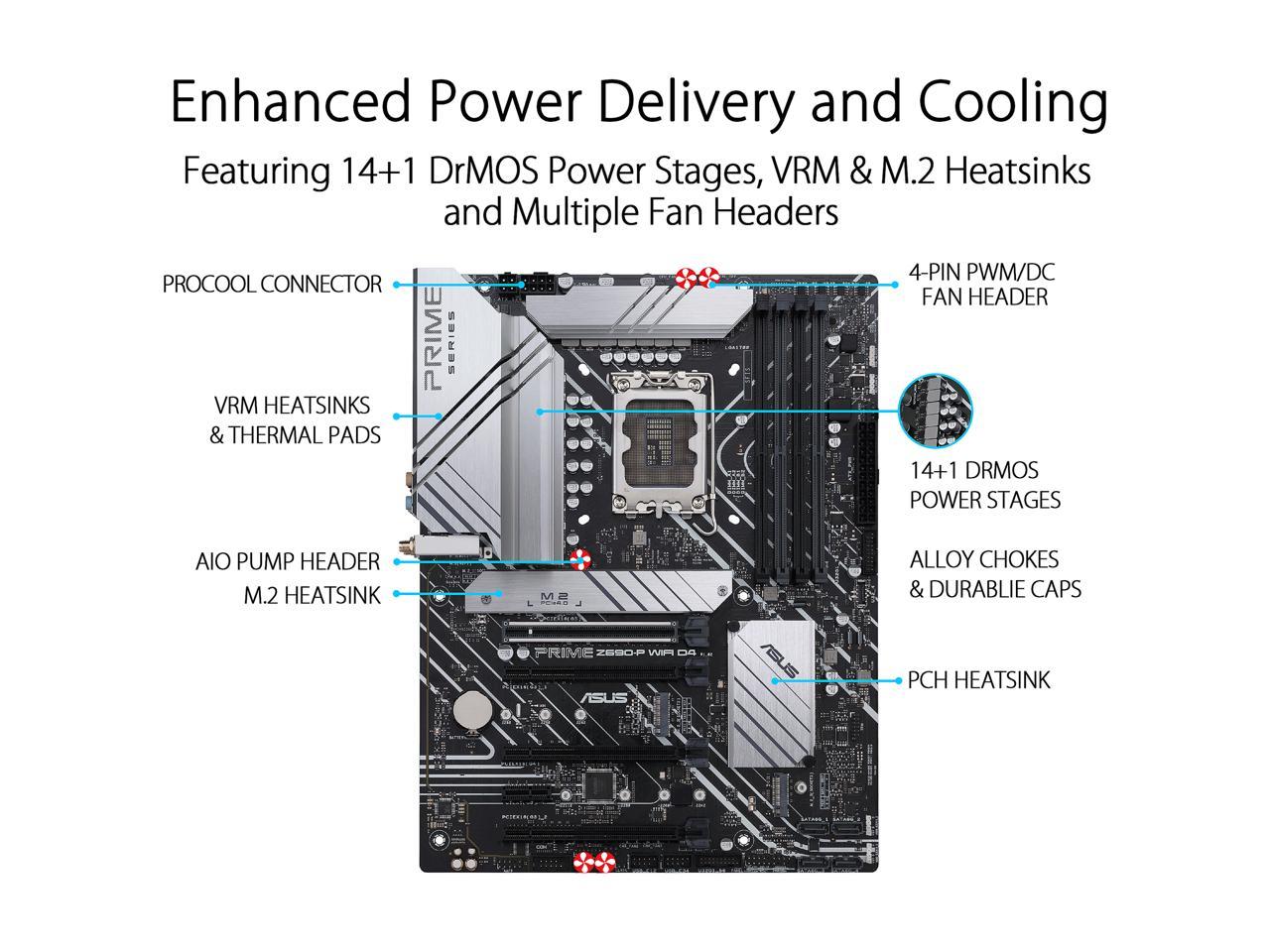 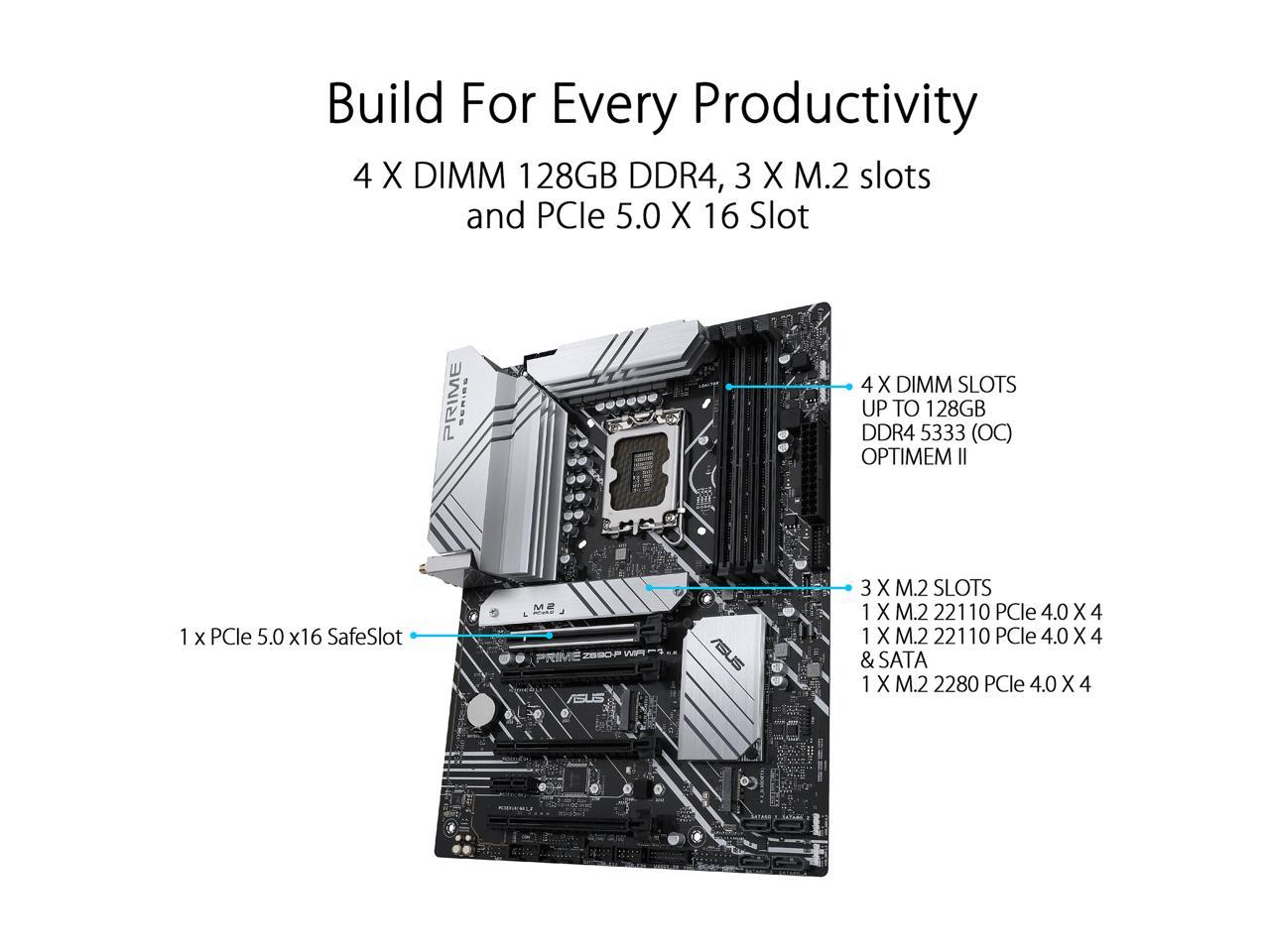 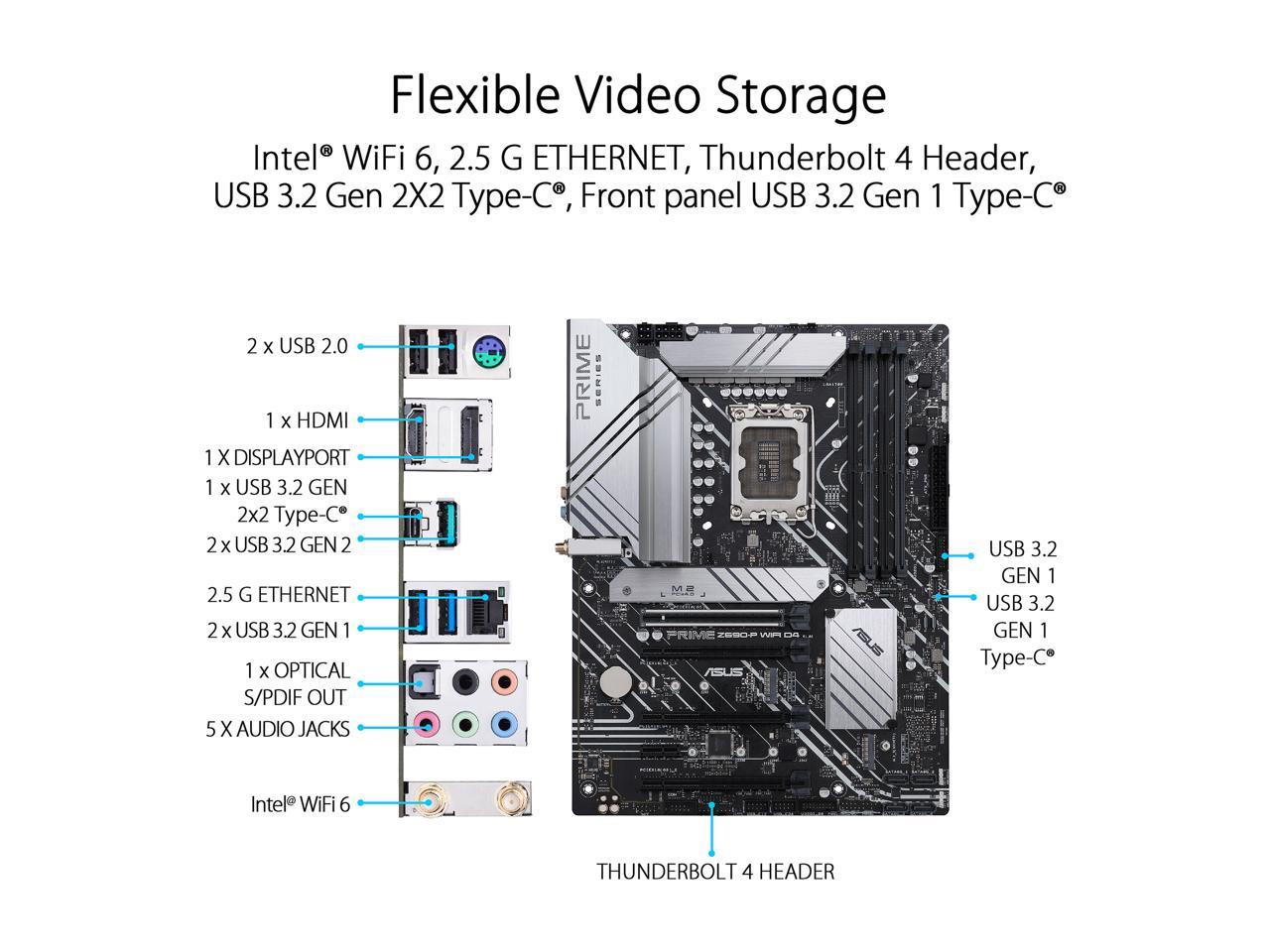 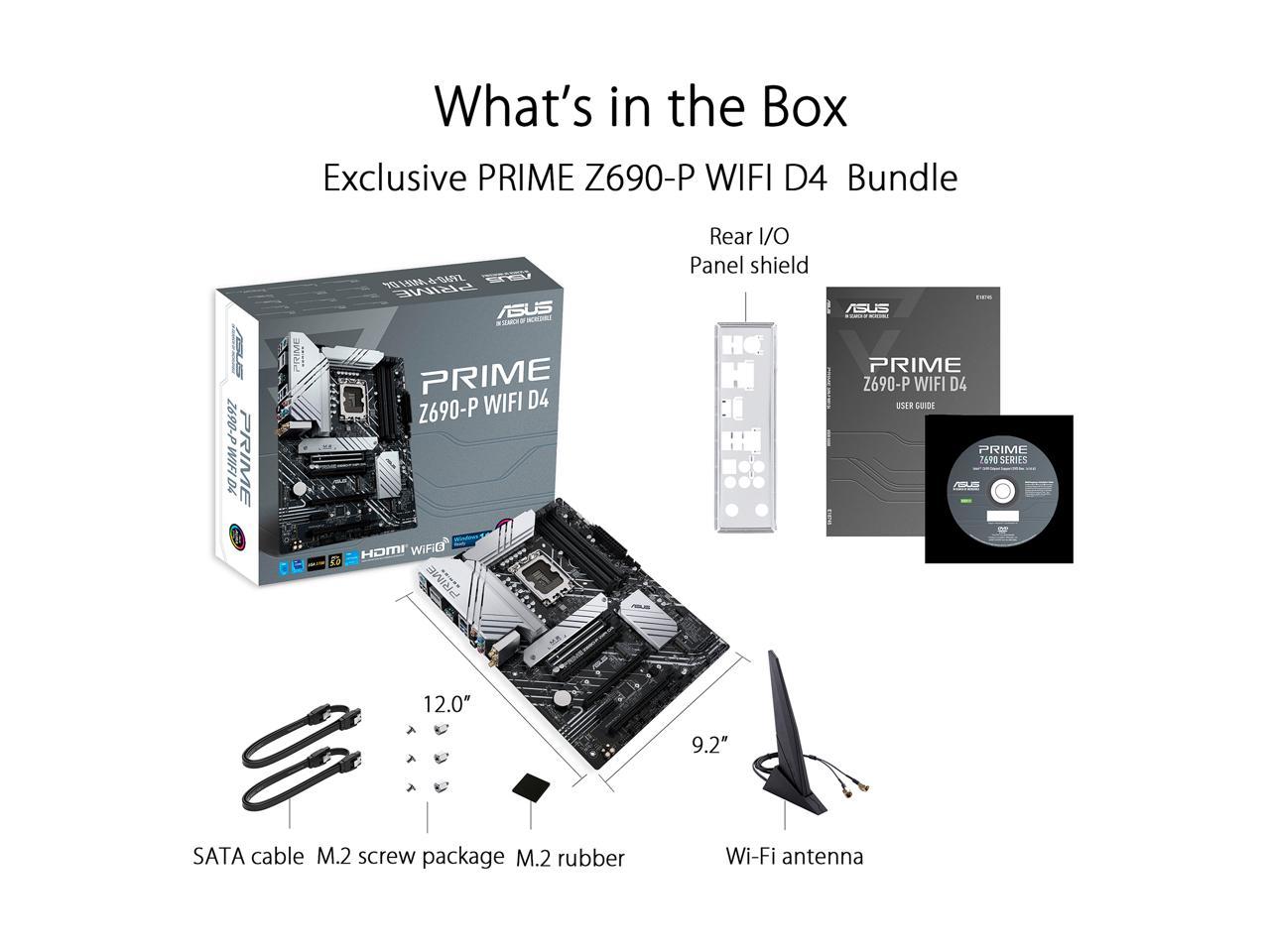 Pros: This board used as a build for grandson's first rig liked the built in features Wifi 6, takes Intel 12th Gen CPU, PCIe5(for future upgrading) Thunderbolt ready, Windows 11 ready, the board itself feels sturdy had to use a fair amount of force to seat the memory sticks properly. BTW the retainer clips did close all the way on first attempt without the memory sticks being fully seated only figured that out after system wouldn't post up so did the reseat pushed in harder and then all OK

Cons: As another reviewer said the rear panel cover doesn't seem to fit well, was it the manufacturing by Asus or the slot in my ATX case off? Had to do some Dremel work on it. Used memory slots 2&4 but that first slot is pretty close to the CPU/cooler so for users who need to use all 4 memory slots might be an issue Took a little while to do updates/load all the drivers/update BIOS(used EZ Flash 3) not really a con got to figure a 'new board' software changes inevitable from manufacturing time to purchase

Overall Review: Think a reasonable price for a 'Latest board' looking forward to videocards eventually coming down in price so grandson can upgrade his gaming experience

Pros: - Got this board for my i5 12600k. The LGA 1700 socket should hopefully be relevant for the next while. - The PCIe 5.0 x 16 is also good for the upcoming generation of GPUs. - Integrated Wifi was convenient for me to get my computer setup. I just had to get the drivers on there first which was the only sticking point. - What I meant by "Strong" was that this thing tolerated my amateur self wrenching on the RAM slots over and over again to troubleshoot a faulty RAM stick. The board flexed which freaked me out, but it held up and works fine now. The primary RAM slots (A2 and B2) do not let you know when the RAM is fully seated though. See the Cons list.

Cons: - The drivers come on a DVD. I don't think optical drives have been standard on PCs for quite a few years. I had to use my parents' computer to read the DVD and copy the files onto a flash drive for my computer to use. Unless you have an optical drive, you need to use a different computer to either read the DVD or download the drivers onto a flash drive. I think drivers should come on small USB flash drives now to avoid this issue. - The gray primary RAM slots (A2 and B2) do not fully latch when the RAM is seated which led me to put a lot of force on the RAM sticks, likely needlessly. The latches on the gray slots *almost* close when the RAM is seated, but you need to give them a little nudge for them to click into place (which is outlined in the manual somewhat). This is unusual in my experience and made me quite uncertain about whether I had everything in right. Even weirder, the black secondary slots (A1 and B1) are smooth to get the RAM in and out of, and the latches fully close with a reasonable amount of force on the RAM. - More of a tip than a con about the gray primary RAM slots: you may need to "rock" your RAM into place because the slots have a latch on only 1 side while the other side is a fixed post. Instead of pressing down evenly on both sides of the RAM, I found more success by first getting the RAM deep down into the slot evenly, then making sure the side near the fixed post was fully seated. Finally, I pressed down on the side near the latch until the latch was almost closed (the latch is ~1 millimeter away from the side of the RAM), then closed the latch myself.

Overall Review: I like this motherboard because it should be future proof (besides DDR5 RAM, but that's not a great option right now) and it came in a sweet bundle with the CPU I wanted. However, the RAM slots gave me trouble and the drivers were inconvenient to get onto my computer which did not have an optical drive. I took off 1 egg for those issues.

Cons: Where to start? First I thought it was dead. HDMI on motherboard did not work out of the box had to update. Had to use a GPU to get iGpu to work because would not display ANYTHING. Tried every part to fix this issue wondering why it would not post...luckily I have other GPUs lying around but still aggravating when you are stressing over which brand new part is messing up.

Manufacturer Response:
Dear Theo J, We're sorry to hear about the unfortunate experience you're having with the GPU on this mode. Based on the issue you described, we would recommend that yo have this unit sent in for servicing so we can have our team look into this issue. We do value our customers and take negative customer service experience very seriously. This is not the quality of service expected from ASUS. We do stand behind our product and we continuously strive to improve our approach and processes in order to achieve customer service excellence. For more information send us an email at customerloyalty@asus.com and provide the link of this review for reference. We’ll do our best to provide a quick resolution to your case. Your feedback is important as it helps with improvements to ASUS Support channels. Please copy a link to this post as a reference. Thank you for choosing ASUS. Best Regards, Joan ASUS Customer Loyalty US Support
unsatisfied customer
Ownership: 1 week to 1 month
Verified Owner
Dead on arrival3/15/2022 8:05:52 AM

Cons: the Mobo arrived broken... set up the entire PC hit the power button and nothing happened... no lights, no fans no anything.... 2 different known working PSU and 5 more hours of reinstalling everything.... still nothing... contacted asus and shipped it back to them.....10 days later after I have heard nothing, also i had to pay for shipping to which is super awesome.... I have been a long time asus user... but the experience marks the last time i will use an Asus Mobo.... I will update if i ever get my board back and it works.

Overall Review: not recommending to anyone ever.....

Manufacturer Response:
Dear Valued Customer, It's unfortunate to hear that the unit came dead on arrival and you had to ship it in for repair. What you've experienced was not intentional and this was a random case. If you wish to follow up, feel free to reach out to me at customerloyalty@asus.com and provide this link for reference. I'll do my best to provide a quick resolution to your case. Your feedback is important as it helps with improvements to ASUS Support channels. Thank you for choosing ASUS! Best Regards, Jamalie, ASUS Customer Loyalty US Support
Anonymous
Ownership: 1 week to 1 month
Verified Owner
Great mobo1/18/2022 8:35:21 PM

Overall Review: Overall, this has been part of a great build. Has ARGB, AIO pump header, and all the connectors I needed for my newest build. The machine runs great and the board has extras that I can use at a later date for further upgrades.

Overall Review: This motherboard has 4 memory slots ... A1, A2, B1, B2. I have two G. Skill memory modules from the Asus Memory Compatibility List. The motherboard will not boot with a memory module in A1 or A2. I have updated the BIOS to the latest version and attempted every memory module configuration the I can imagine. All with no success. It appears that this board has a bad memory channel.

Manufacturer Response:
Dear Valued Customer, It's unfortunate to hear that your unit failed to boot with the memory module. This is not the kind of experience we want any of our customers to have. Are you hearing a beep code? Please attempt to reset the CMOS battery and try one memory chip in each DIMM slot. For further troubleshooting, feel free to reach out to me at customerloyalty@asus.com and provide this link for reference. I'll do my best to provide a quick resolution to your case. Your feedback is important as it helps with improvements to ASUS Support channels. Thank you for choosing ASUS! Best Regards, Jamalie, ASUS Customer Loyalty US Support