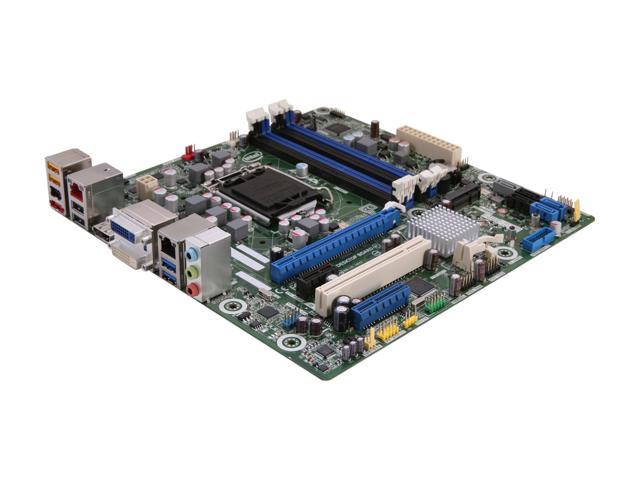 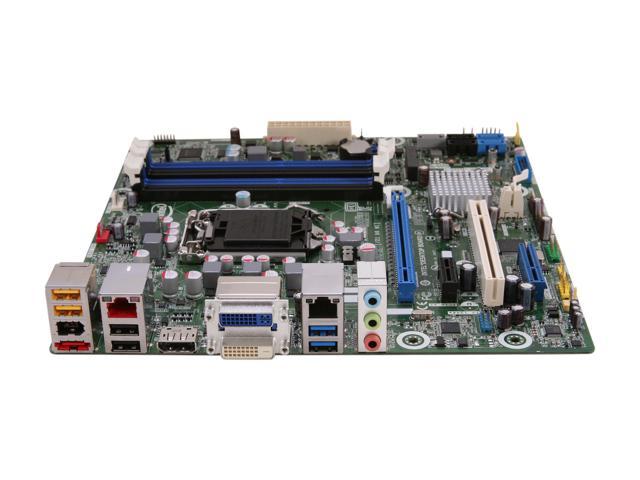 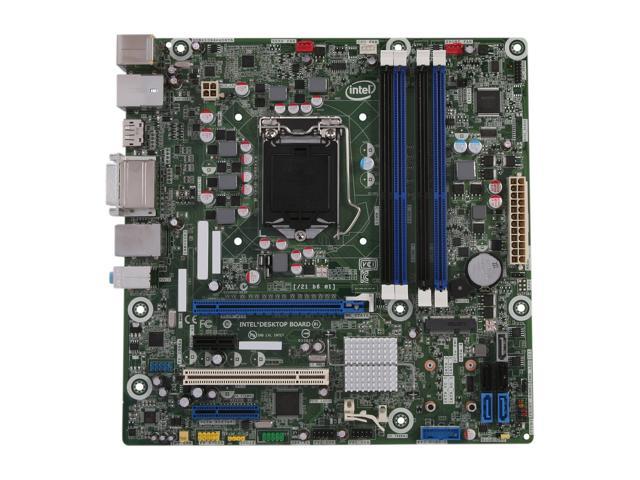 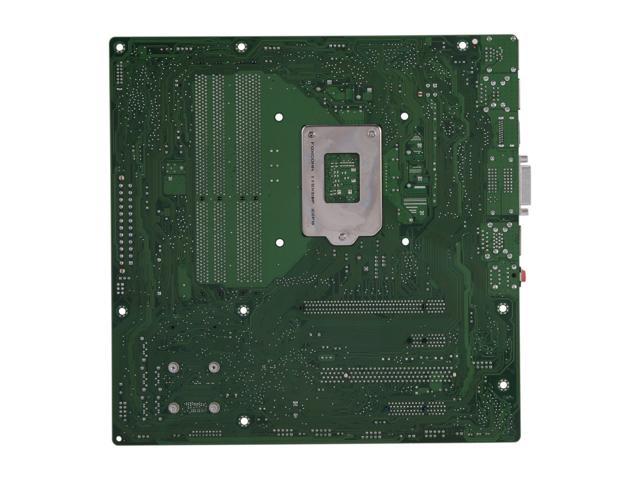 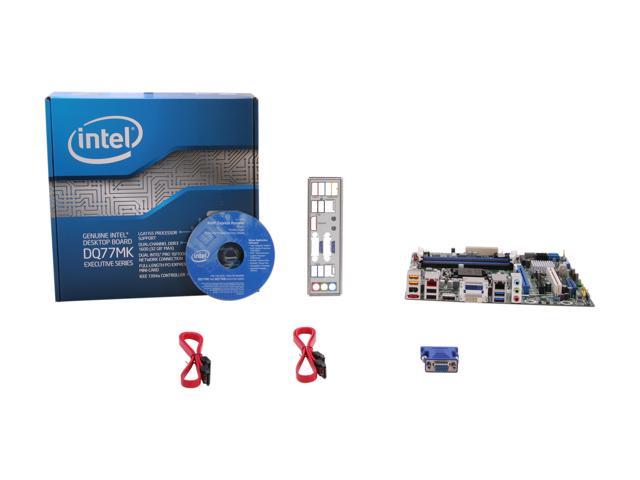 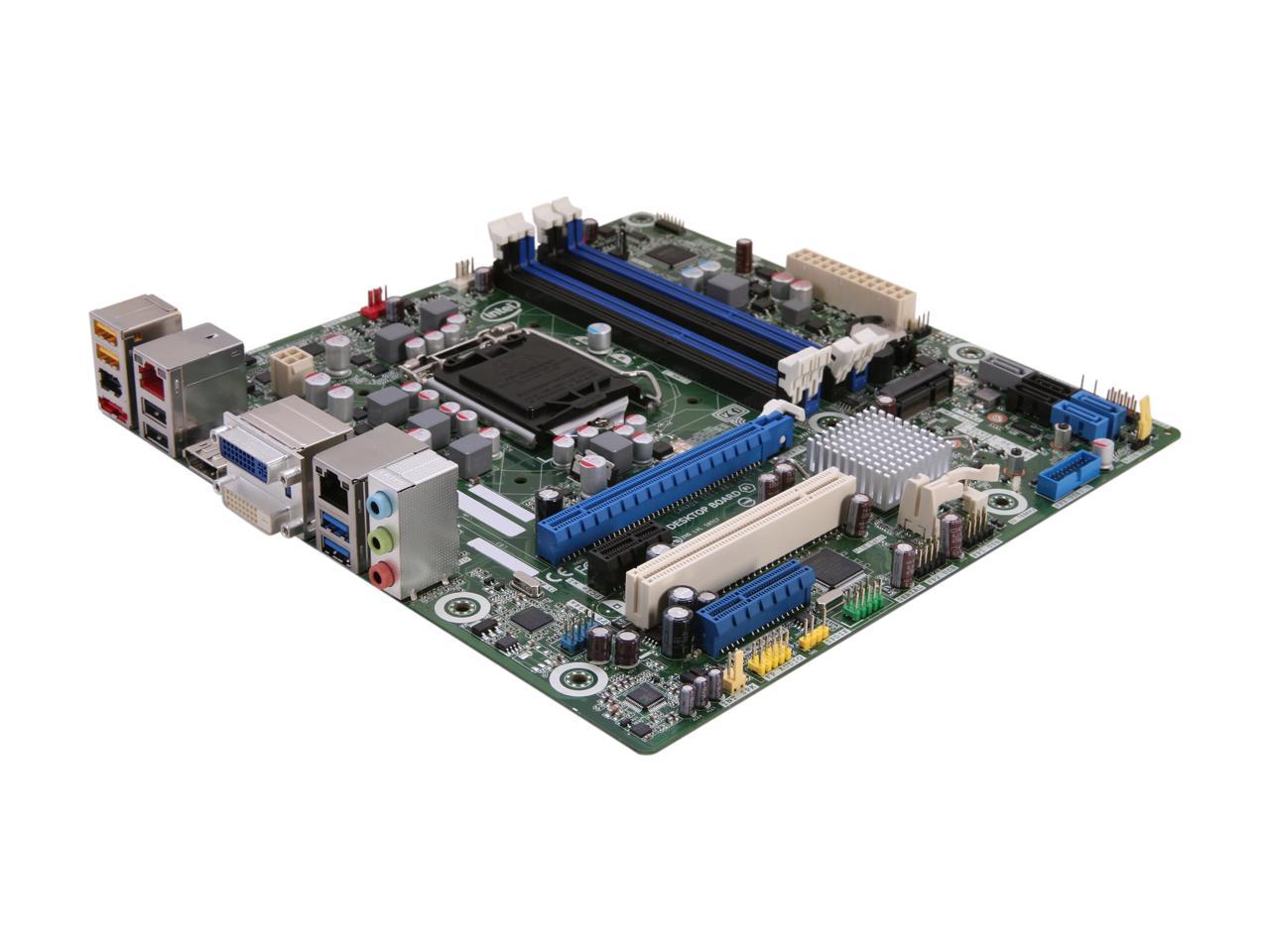 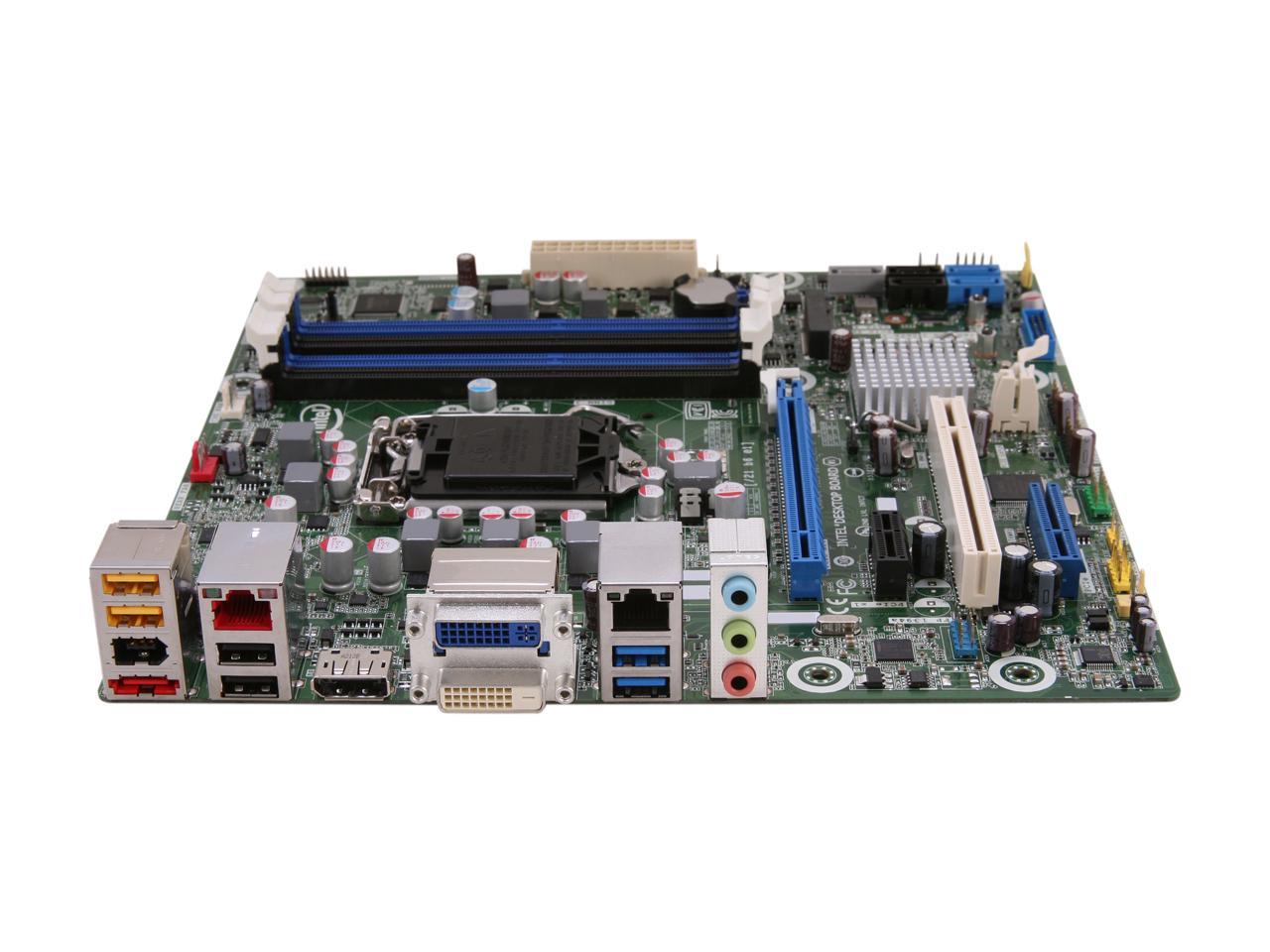 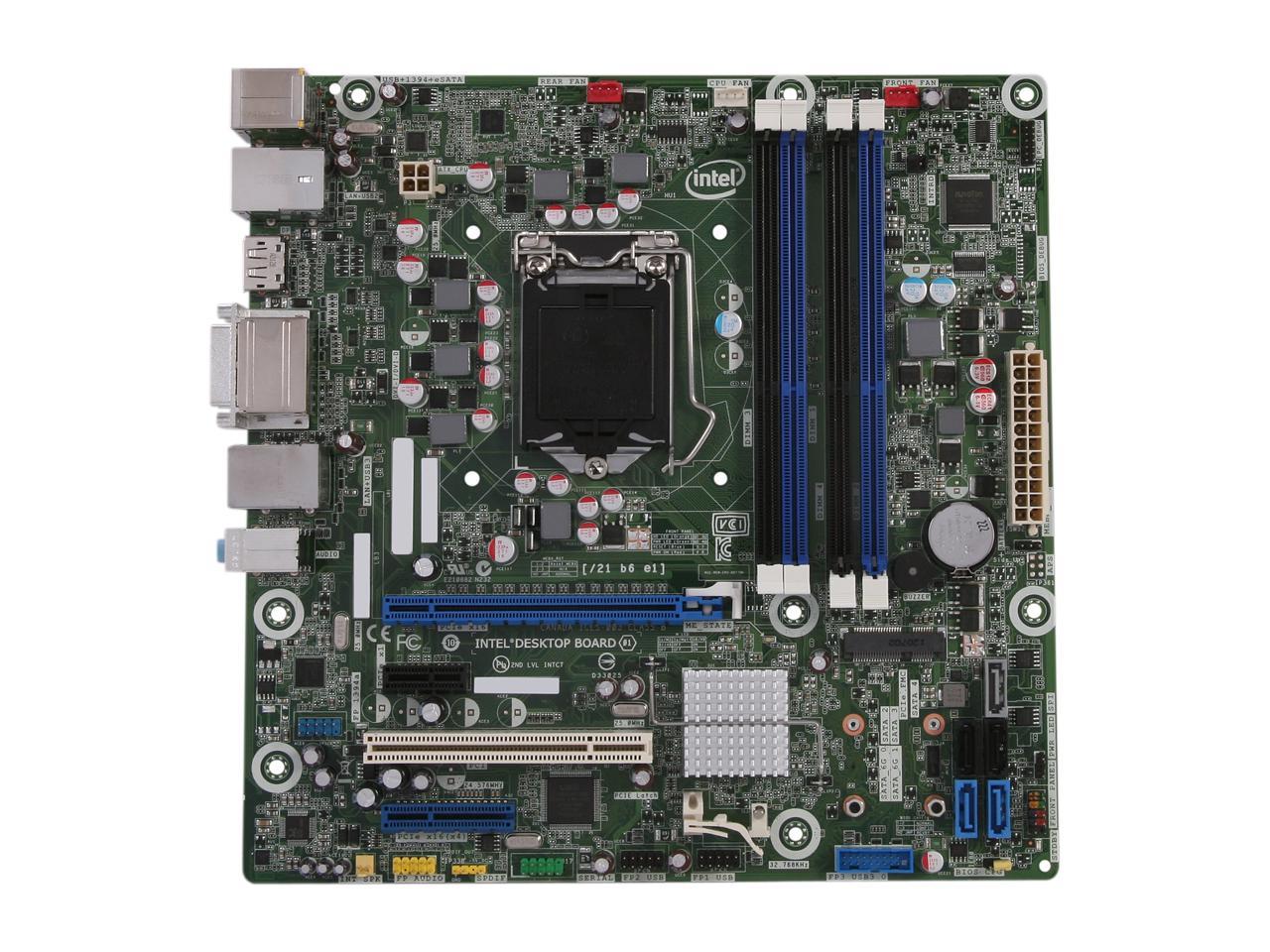 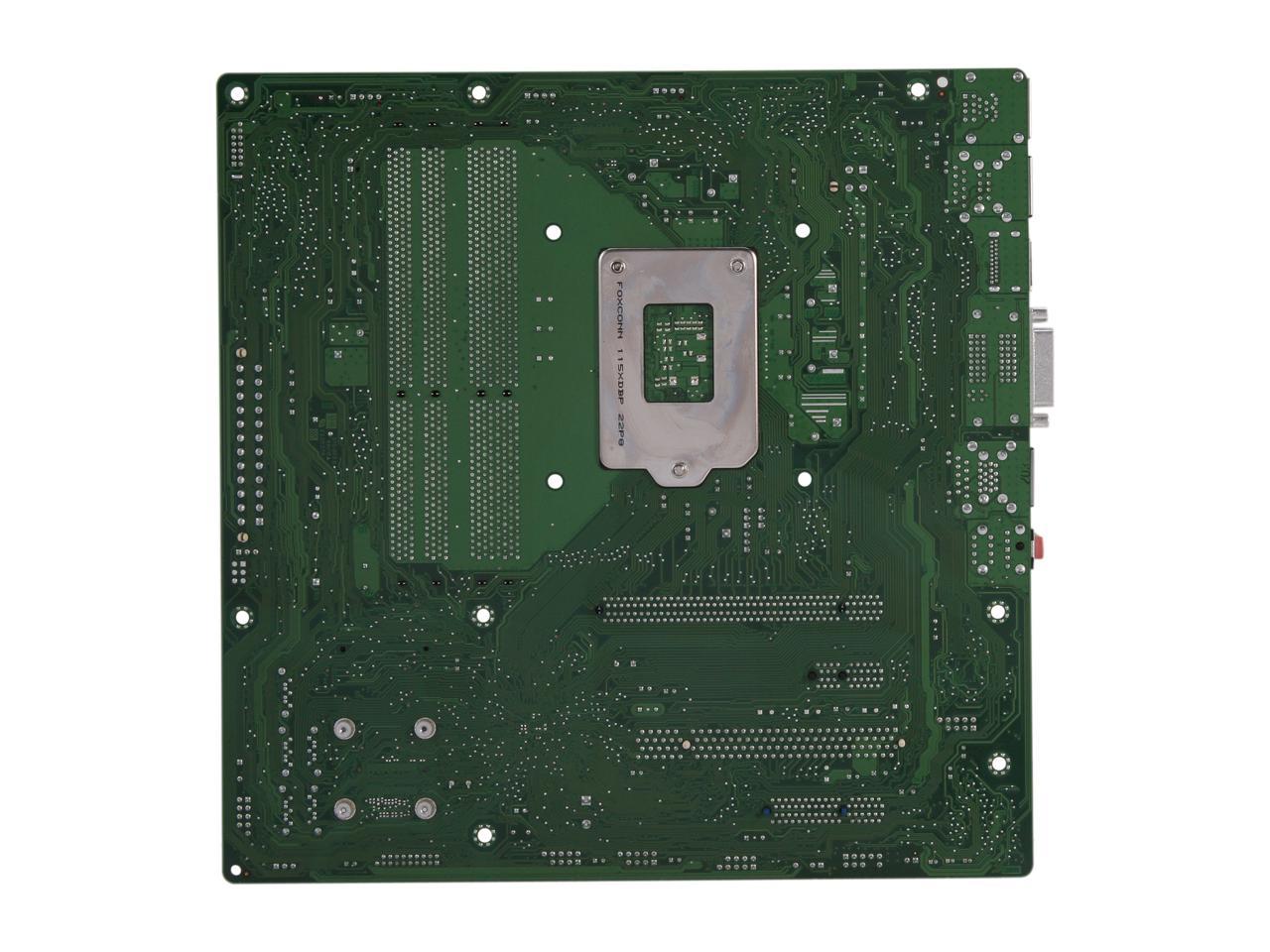 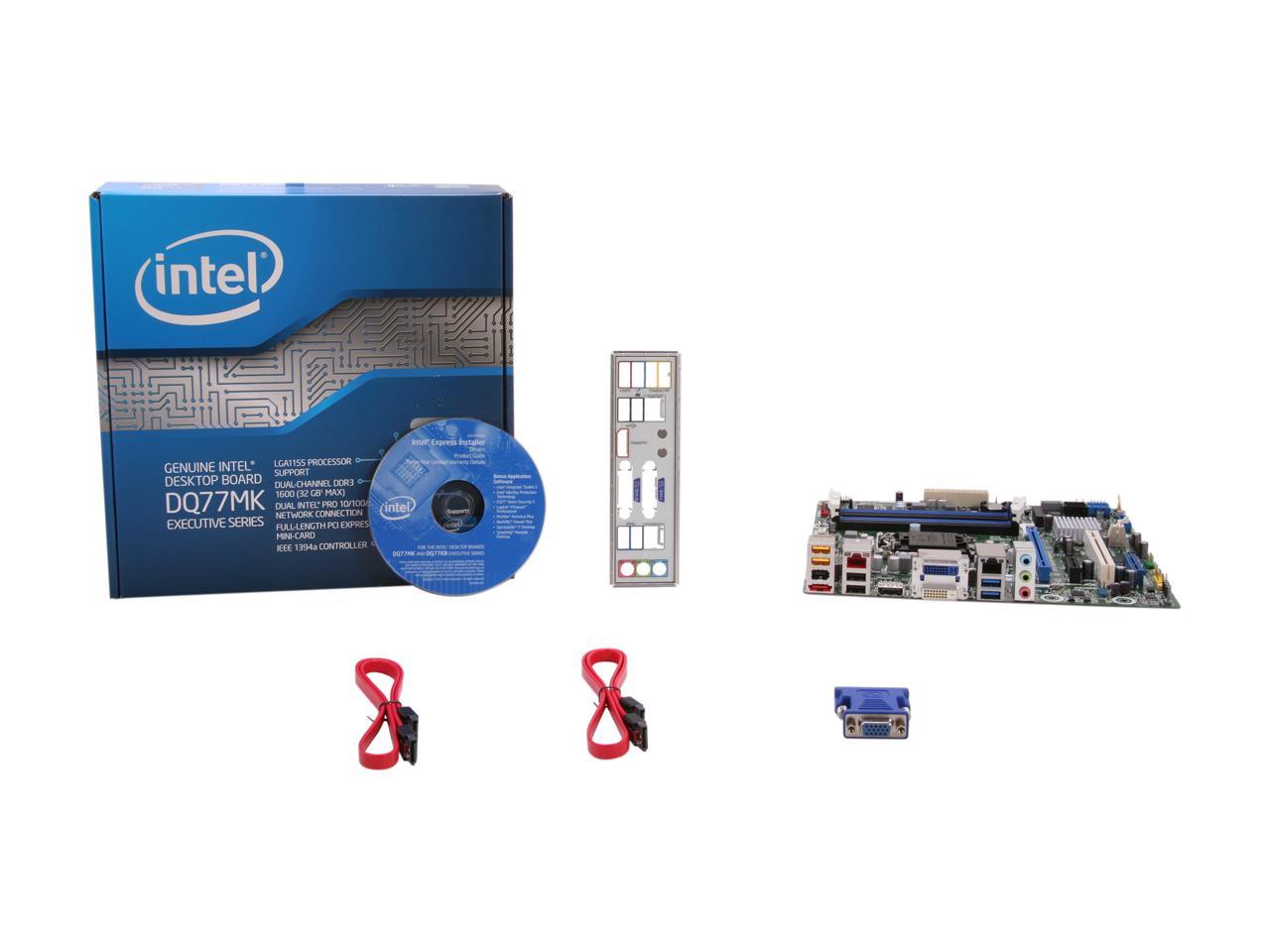 (25) Write a Review
OUT OF STOCK.
Overview
Specs
Reviews
.

Learn more about the Intel BOXDQ77MK

Pros: I've built a lot of computers with hardware from Asus, Shuttle, and several others. This motherboard was the quickest & easiest to configure. The BIOS options are flexible, BIOS updates can be done from the BIOS itself without needing any bootable media and just a flash drive for loading the new image. I built this as a UNIX workstation and to run various VMs with VirtualBox. I installed 32GB of G.SKILL Sniper Gaming memory purchased during NewEgg's Christmas sale and an i7-3770 CPU. That particular memory can run at its full potential on this motherboard by simply choosing the XMP profile for it from within the BIOS. See my review on the memory for more details. And for those interested, it runs Solaris 11.0 flawlessly. Since native SATA 3 & USB 3 support didn't come until Solaris 11.1, those controllers are still fully functional as their version 2 variants on this motherboard. Or install 11.1 once Oracle resolves some new USB bugs.... It also runs FreeBSD/PC-BSD 9.1 fine, and I'm sure virtually all other modern(ish) Linux & Windows operating systems. I have three HDs installed in a ZFS mirror internal to an NZXT Vulcan case, an external SATA dock, and an additional SiI 3132 controller for more eSATA ports if needed. With the requisite internal DVD burner and an internal card reader, this is all nicely outfitted for my particular needs.

Cons: I'd prefer at least two eSATA ports on the rear, although with five onboard SATA ports, one or more can be used for eSATA.

Pros: Board works great. Everything just worked with no tricks needed to get the install working. Installed one with Win8 64 pro. Other with Windows Server. This board has serial header that I needed for some old hardware that does not like USB to serial converters. Good choice of options to cover a lot of uses with no issues... Installed with 32 GB 1600 Crucial memory with no issues. Intel 335 drives I7-3770 No over clock Windows Experience Index 8, 8, 6.4, 6.4, 8.1

Overall Review: I hope Intel copies this board with the next tick of the I7 chip.

Pros: I wanted to build a simple, dead reliable desktop to run Linux at home for working from home. This fits in the bill in every way. It's loaded with 32 GB of Corsair XMS3 1600 MHz RAM, which is a necessity with as many VMs as I'll be running, and with CentOS 6 loaded on it, it's dead reliable. Between this board, the i5-3750K processor, and the RAM, I should be good to go for years. If you're planning on running something other than Ubuntu (or something equally bleeding edge), you might just want to prepare yourself to upgrade the kernel.

Cons: It's a little pricey, but if you want a board that has 4 DIMM slots from Intel with an Ivy Bridge chipset, your options are slim.

Cons: After a bit of use, the network adapter often stops working. Also exhibits the same behavior other users described: USB devices begin dropping out in repeated bursts, at which time the network adapter dies completely. Forces you to restart your computer.

Overall Review: I'm sad. This motherboard seems to be dying. I do not have money for another one. Should have bought something else. :[

Cons: They're not giving them away!

Overall Review: I have two of these boards. One is running pfSense and the other ESXi. As a pfSense appliance this board does a lot. It's probably overkill but it's incredibly expandable and I'll never be able to saturate the chipset with four Gbit connections. ESXi runs incredibly well on this board. However, ESXi does not recognize of the NICs, so you'll never get to use that one. That's not the board's fault, that's a shortcoming of ESXi. I have an i7-3770S inside and maxed out the 32GB of RAM. The server hosts 13 virtual host on this single node. The Q77 chipset really lends itself well to any kind of virtualization and coupled with an Ivy Bridge processor it's the bomb! I am very, very happy with these boards and will probably buy a couple more before they're discontinued for something better.

Pros: -Solid, feature-filled production workstation board at a fair price. -Nice BIOS layout. Simple, intuitive, and detailed. -I like the fine-toothed control you have over all three fan headers. Under all but the highest workloads, the fans hum along quietly at 30% of their rated speeds, barely audible. -Motherboard headers are placed nicely such that there are no issues with power supply cables being able to reach everything via snaking behind the motherboard. I.e, no cable clutter in the case.

Cons: There are some USB issues. Wireless USB mice (I've tested three, two Microsoft brand and one Logitech) get jumpy during high cpu activity, and become completely unresponsive when I plug a SanDisk Extreme 16GB USB 3.0 flash drive into any USB 3.0 port (front or rear). This does not happen when I plug a USB 3.0 external hard drive (Western Digital 3TB) into the USB 3.0 port, so it appears to be a bug with the SanDisk Extreme. It also does not happen when I use any of my USB 2.0 flash drives. I've updated chipset and USB 3.0 drivers to the latest versions but the problem remains.

Overall Review: The USB mouse issue only seems to occur with wireless mice. I tried a wired USB mouse and the problems mentioned under Cons did NOT occur. Other than this, I'm very happy with the board, and hopeful that a driver update from Intel will eventually fix this issue.

Pros: Paired with a 3.2 Ivy Bridge i5, 32GB of RAM, and runs VMware 5 extremely well. Doesn't pull a lot of power at idle; my ESX host now takes 50W idling compared to my old one taking 150W.

Cons: Management NIC not supported by VMware, but fixed easily by adding an Intel PCI-e NIC.

Pros: Nothing wrong this seams to process very fast so far. I over looked the number of connections for devices would of liked to have had a couple more

Overall Review: Built a new computer with intel mother boardBOXDQ77MX an intel 3770 processor a full 64gb ram and a HIS HD8770 video card 2 g hard drive with a 120gb SSD for the main boot