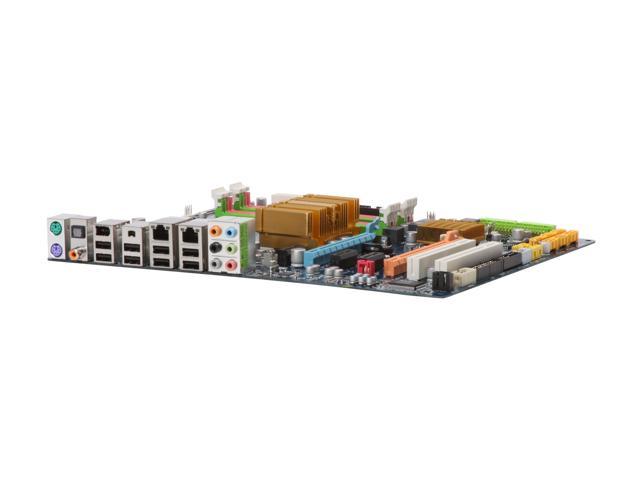 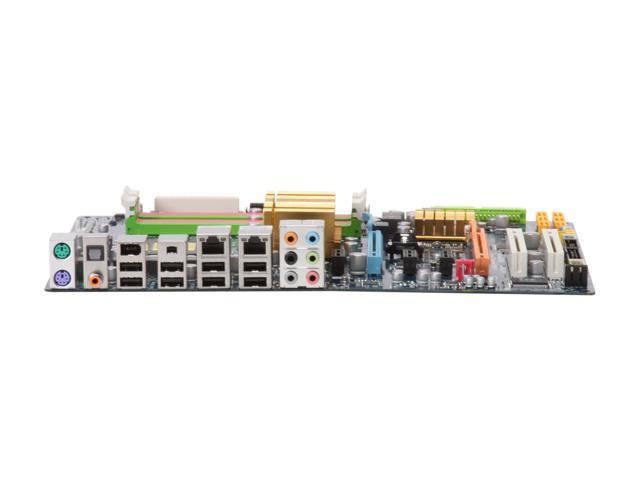 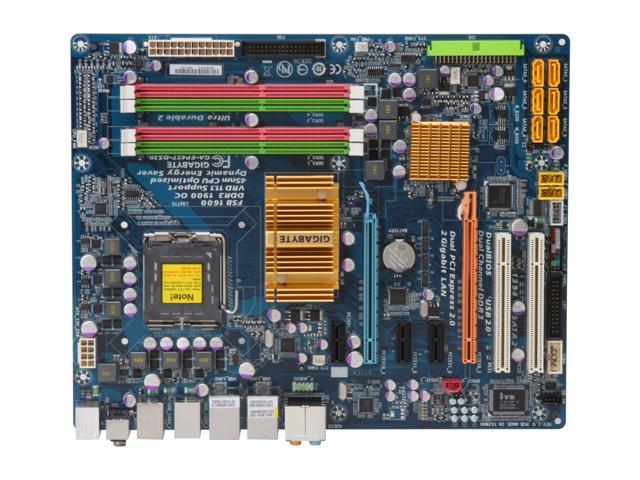 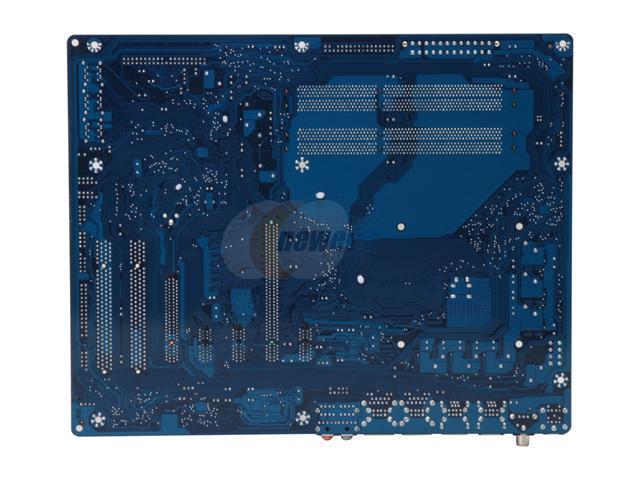 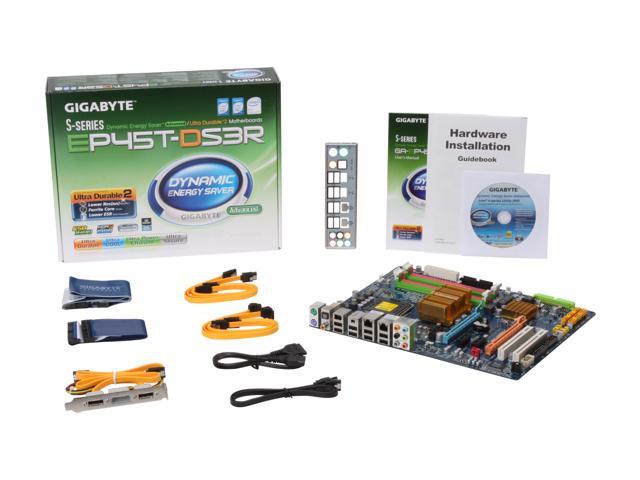 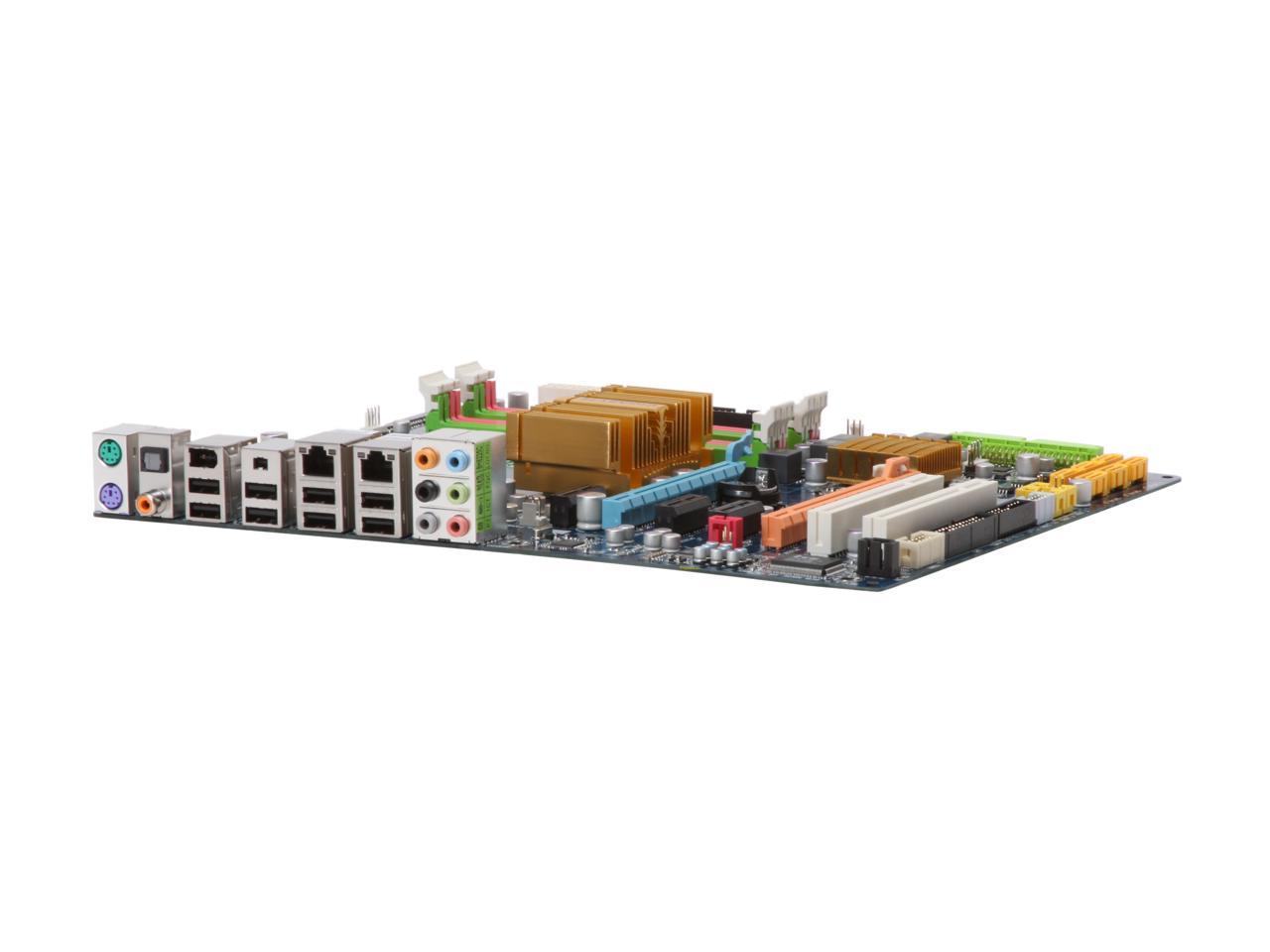 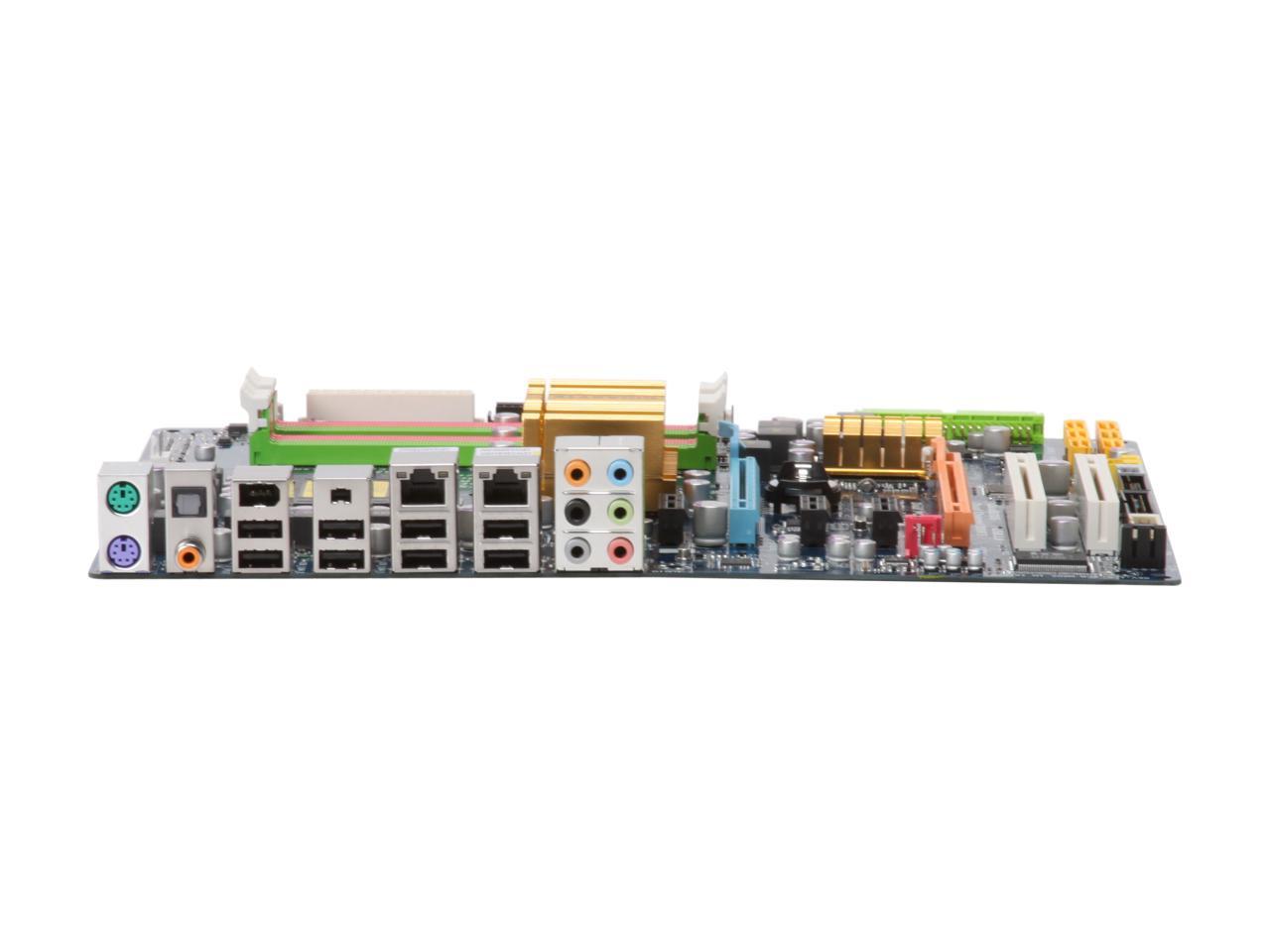 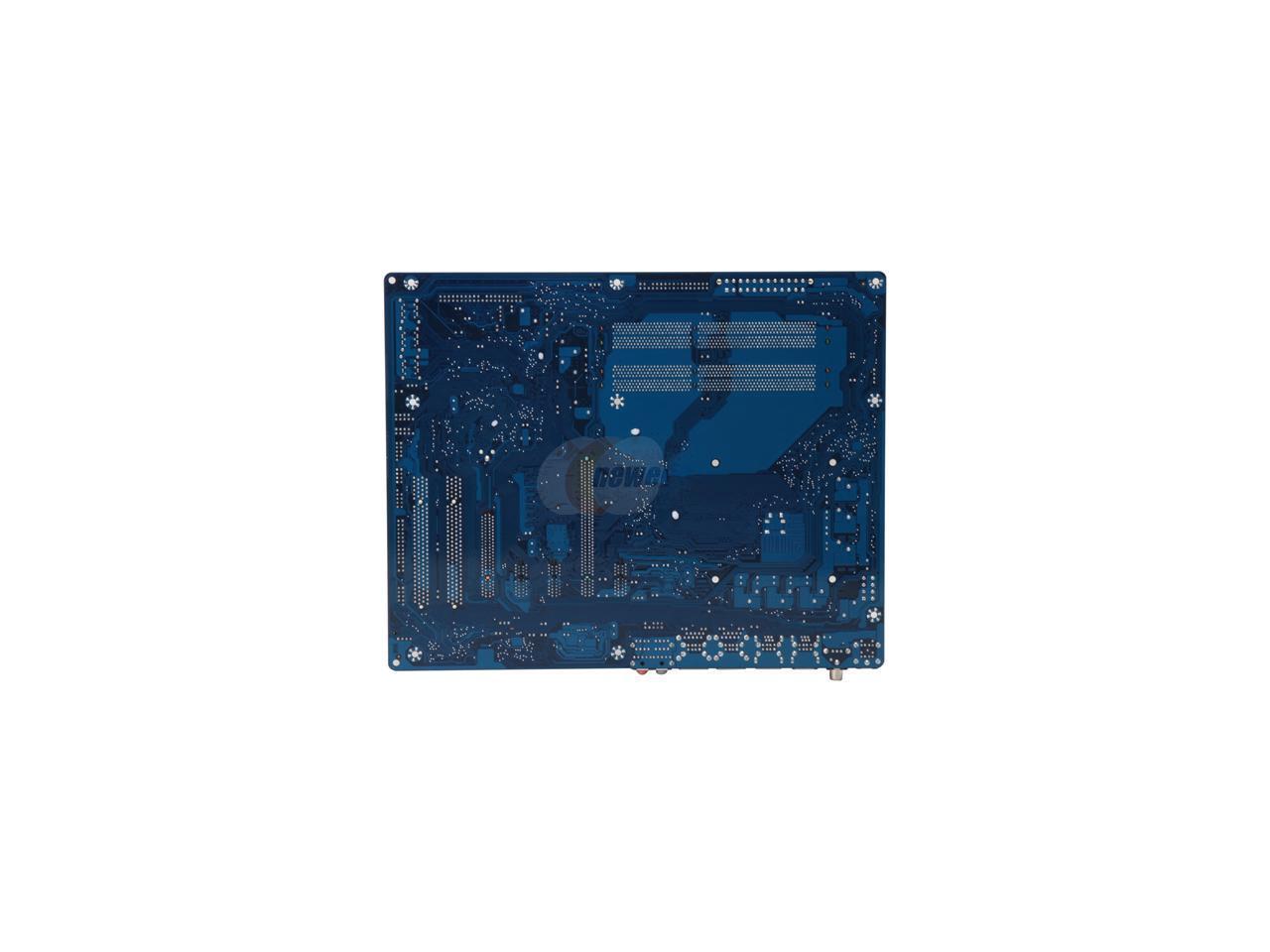 (48) Write a Review
OUT OF STOCK.
Overview
Specs
Reviews
Gigabyte's GA-EP45T-DS3R motherboard has been optimized to work more effciently with today's 45nm processors. The board has dynamic 6 gear power switching. As your system needs more power it gets it and when the power load goes down, so does the supplied power. This lets you have power when you need it, and save energy and money when you don't.
CPU power isn't the only thing that is energy regulated. The Gigabit Ethernet connection tests the connection for length and signal strength and optimizes transmission power for the connection. Dual LAN with teaming allows you to speed up your data transmission by using 2 connections as 1.
System durability and security are as important as ever. Gigabyte's DualBIOS system has a second BIOS chip on the motherboard for quick and painless recovery from crashes and viruses. They also built the motherboard with all conductive polymer aluminum solid capacitors for increased longevity and power efficiency. An Ultra TPM module keeps your data as safe as your system.

Learn more about the GIGABYTE GA-EP45T-DS3R

Pros: Gigabyte has finally updated the installed BIOS to the stable F2 version, which should eliminate most of the instability problems previously encountered with this board. Floppy disc support is a nice feature for those using XP Pro OS (Gigabyte's 'Q-Flash' utility). Northbridge and southbridge heatsinks are unobtrusive but adequate, with northbridge temps ~44C. and southbridge temps ~50C. in my Lian-Li mid tower case. The connectors are nicely labeled. The dual BIOS is an innovative and comforting feature - if the main BIOS fails, the backup takes over and can boot past POST to the CMOS setup. You don't have to bite your nails anymore when doing a Q-flash BIOS upgrade. The I/O ports line up perfectly with the I/O shield, and the anchoring holes line up perfectly with the MB plate posts. Booting is fast - the Windows splash screen appears in <10 seconds, and the computer is fully operational (no hard drive chatter) in <45 seconds with XP Pro SP3.

Cons: This board requires rather extensive BIOS setup tweaks before it will boot properly, even though the F2 BIOS is much more stable than the buggy F1 BIOS. Specifically, memory must be manually configured according to manufacturer's specifications - do NOT set memory configuration to 'auto', because the SPD chip is incorrectly programmed. If you have a SATA hard drive, be sure to enable SATA Port 0-3 Native Mode which allows SATA controllers to operate in Native IDE mode. Enable SATA RAID/AHCI at your peril - this will predictably give you the BSOD whether or not you have preloaded RAID/AHCI drivers. Theoretically, eSATA should be Plug-n-Play just like 1394a/b and USB-2. Well, someday. If you want this board to recognize an e-SATA peripheral device, be sure the device is powered on at boot.

Overall Review: I managed to destroy my first EP45T-DS3R board by overflexing the board upon attaching the 24-pin ATX PSU connector. The 'crack' was clearly audible. Be forewarned that the 24-pin connector is positioned midway between the plate posts, allowing maximal flex if not supported underneath. Firmly support the board under the 24-pin power connector when attaching the PSU cable. My Intel E8500 CPU (3.16GHz, 1333MHz FSB) is fast enough without overclocking, so I have manually set the host clock to 9.5x (3.16GHz), locked the host frequency at 333Mhz, and latched the memory to the 1333MHz FSB. This configuration confers absolute stability with dual OCZ DDR3 1333MHz memory modules. Those who wish to utilize faster, indepently clocked memory must accept the associated risk of instability. If you want a reasonably priced performance board supporting DDR3 memory, and you are looking for stability at hardware design specifications, this board is tailor made for you.

Cons: The board is a bit small. If you're planning on running CrossfireX with a card that normally takes two slots due to the expanded cooler, then your left with just one PCI slot. Also, the BIOS default settings and fail safe settings automatically set DRAM to turbo, which gave me quite a few headaches. Not only that, but the motherboard doesn't want to automatically detect stable voltage settings for my DDR3 1800 sticks, and defaulted it to 1.5v instead of 1.9v like it should have. Further more, the onboard audio ( while it sounds crisp and clear ) does not have proper multispeaker support outside of stereo. I suspect the audio issue to be a driver issue which Gigabyte will hopefully remedy in the future. Lastly, using the auto detect and install necessary drivers and software feature from the motherboard DVD seems to break computer functionality. Using WinXP Home, the feature completely uninstalls and disables USB drivers.

Overall Review: Once the motherboard was configured properly, everything ran as smooth as butter. Gigabyte seems to be rather active in releasing updated BIOS versions for this particular model...which can either be a good thing or bad thing.

Cons: Stock bios settings are very unstable. Someone with a low understanding of their hardware would be lost and RMA this one. PCIe drops to 8x when you crossfire. The F3h BIOS is bad don't bother. Like others said stick with the F2 bios.

Overall Review: Once you have the bios settings correctly set this is a stable board. Gigabyte needs to step up and get the bugs out of the bios.

Overall Review: Don't try to configure the BIOS with the originally loaded F1 version. The upgraded F3h BIOS can be 'flashed' in Windows using the Gigabyte "@BIOS" software. BIOS setup is not for wimps - supplied documentation is unhelpful, and stability is achieved only after hours of trial-and-error rebooting. With 333MHz host frequency and 9.5x multiplier, the Intel Core 2 Duo E8500 CPU operates at its designed specs (3.16GHz, 1333MHz FSB). With OCZ DDR3 1600MHz memory, 1:1 clocking is unstable, whereas the default 1:2 appears stable, so the effective memory frequency is only half the rated specification. This is a tricky board to configure. Hopefully future BIOS releases will resolve some of these issues.

Pros: Good solid board, what I've come to expect from Gigabyte.

Cons: Preinstalled BIOS can cause issues with video drivers (above the standard VGA), leading to black screen during Windows Vista boot, updating to latest version of BIOS resolved the issue, so be sure to do that before updating video drivers.

Pros: PART 1. Bought 4 items from Newegg: Core 2 Quad Q9550; ARCTIC COOLING Freezer 7 Pro; GA-EP45T-DS3R systems board; Patriot 4GB-DDR3 SDRAM, PDC34G1333LLK. Purpose: A better upgrade from a good system with a 64 X2 3800+ on A8N-E systems board w/dual boot XP PRO SP2 32 Bit/VISTA Ultimate 32 Bit. New system is dual boot XP PRO 32 Bit/VISTA Ultimate 64 Bit version. Was a nice fit into a my L-Li case & I reinstalled the GeForce 8 series, 4 SATA drives, High end Sound and Combo TV-Capture Cards from the previous System. This was the fastest install ever experienced with XP. I installed all my software plus tweaked the XP for a few weeks. I then created a backup image and installed the VISTA on 2nd Drive.

Cons: Part 2. I had noticed the 1333MHz memory was defaulted to 1066MHz when installing the XP. I manually set the SDRAM to 1333 MHz. No problems in XP which only sees about 3GBs of the RAM but later, had a problem loading the VISTA-SP1 update. The computer froze more than once with memory errors noted. I ran memory tests downloaded from the Patriot Web site & found errors. I talked with a Patriot Tech; very friendly & helpful folks. I had ideas about the problem & wished to confirm. I had noticed the Gigabyte systems board would default the memory to 1066MHz and 1.5V. The specs stated 1.7V. I noticed this only after performing the memory tests @1333 MHz/1.5V (not so good). The memory choked &, the Patriot tech stated set to 1.7, & 1.75V was even better. Now locked in the BIOS @ 1333MHz/1.74V and timing @ 7-7-7-20, MEMORY PROBLEM CURED! HAH-RAH! Other note: This CPU/board combo tolerates very little over clocking.

Overall Review: Part 3. Regardless, the system is remarkably fast! VISTA is ready 40-45 seconds from power on, including a 6 sec. delay for the XP boot option. I crunch Videos to DVDs now less than ½ the time required with the old system. The Patriot Memory runs “on fire” set to the specs above. The CPU w/Arctic Cooler is down-right cold @ 70-74F. The case has 4 fans w/2 power fans; the systems board runs 116-120F. The graphic & TV tuner/capture cards are quite warm; I suspect they contribute to the board heat. This CPU/board combination has a very nice energy feature: When the power is not needed the processor drops to ~2GHz and jumps to ~3GHz at MAX, accomplished by change of the multiplier of (6 or 8.5) X (slight variances of the 333MHz frequency). The fault: Was it the board, or was it the memory? It seems: "What we've got here is...failure to communicate." I now rate the system a Happy 5 Stars & the VISTA Windows Experience Index is a 5.9! This will do quite nice for my media experience.

Pros: Everything everybody else listed...

Cons: Raid. Anytime I have it enabled on any drive, even with no raid set created, I get a BSOD on boot (vista 32 ultimate). I have looked for months on how to fix this because I want to created a couple raid sets, but to no avail. BIOS updates haven't fixed it.

Pros: Came up right away after installation, as to be expected from gigabyte. Had to play around and get most recent ATI driver to have system up and running.

Overall Review: I've had problems w\ random blue screens and now i'm curious after reading these other reviews. I was pretty confident I'd narrowed down my blue screens to my 3870's overheating (fans were stuck @ 25% despite 80-90c temps) I'm now running a single 3870 and still getting a blue screen here and there. I'm curious if it could be some of the ''power saving'' features doing it...alot of these blue screens/random restarts have happened during idle time when i was on the couch and... bam, all of a sudden my system restarts.